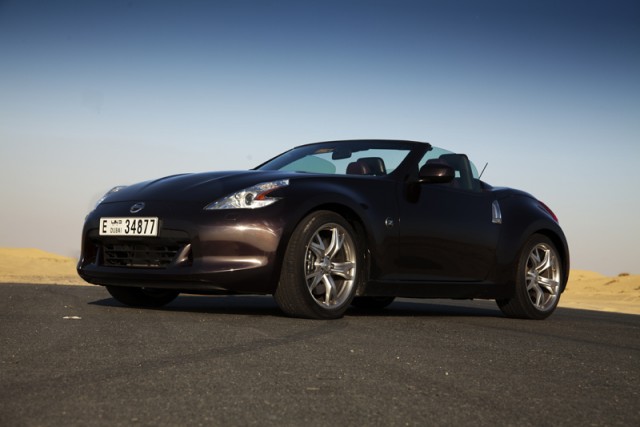 Taking the roof off the 370Z means that you get to hear that delightful engine. We've driven the Roadster.

Few would argue that the 370Z is a good-looking car. The design has evolved quite discreetly from the 350z and these days, convertibles are designed at the same time as their coupe equivalents rather than being an after thought. New design cues include LED rear lights and arrowhead front lights. Roof down or up it is a handsome car. It takes just 20 seconds to drop the hood of the car and that makes it one of the fastest mechanisms around. Whatever about the changes to the exterior, the biggest change is to the interior. The 350z was a good car that was let down by a pretty shoddy interior and that has now changed entirely for the better. There is much better leather and plastic used throughout the cabin and the switchgear is of a much higher standard.

Under the bonnet is the latest version of the 3.7-litre 24 valve quad cam V6 engine with Variable Valve Event Lift (VVEL) technology. It puts out 328hp and 363Nm of torque. This engine is six percent more efficient than before, but with emissions of 262g/km when fitted with a manual gearbox and 254g/km with the 7-speed auto this car sits firmly in Band G. You can choose between a six-speed manual or that new 7-speed automatic, which we were driving. We've already tried the manual before but this automatic is a good alternative, especially in heavy traffic. You can drive this like an auto or there is a manual mode too and you can change gears using the centre shift lever or using the steering paddles. Downshift Rev Matching (DRM) automatically blips the throttle on down shifts in manual mode to keep gear changes smooth. Performance is a little down compared to the coup?, but not by much. 0-100km/h takes 5.5 seconds and the top speed is 250km/h.

The ride is on the firm side, but you would expect this by the nature of the car, but it does feel much more refined than the 350Z Roadster. What is instantly noticeable is that with the roof down, at faster speed the cabin does get quite windy. But that is really the only criticism. The 370Z is a car that feels muscular, taut and potent. Fitted with the automatic gearbox takes a little bit of the mechanical feel to it, but the paddle shifters do work quite well. Leave the gearbox to its own devices and it can be a little ponderous. On the wide roads of Dubai, this car felt right at home, but it still begged for a European back road. There is no doubt that this car is a real rival to cars twice the price of it, including big names like Porsche.

At a fiver under €60,000 in Ireland it could never really be described as 'good value' but most of that is probably down to the 36 percent VRT imposed on the car because of its hefty emissions. But when you consider that you are getting almost 330hp for that price you would be hard pressed to find anything to match it for the money. You will get the full bells and whistles with the car too which means everything from leather upholstery, cruise control, somewhere to plug in an iPod, Bluetooth for your phone and audio, 18" alloy wheels and xenon lights amongst others. You do need to order the Roadster as a special order car in Ireland from your Nissan dealer.

Yes it is a fortune to tax each year, but when you consider just how much car you are getting for you money then the 370Z Roadster actually looks like quite a bargain compared to the likes of an Audi TT Roadster, which will cost you €55,000 for just 211hp and that is before you start adding optional extras. However, the BMW Z4 is probably its greatest threat, where €58,530 will get you 258hp. Anyway, if you are shopping in this segment, it will be a nice problem to have, deciding between that lot.