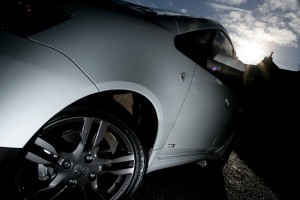 We have just waved goodbye to the Mitsubishi i-MiEV electric car and after 24 hours of silent driving and not a small amount of 'range anxiety', the diminutive battery powered car is replaced with something slightly more old-school, Mitsubishi's Colt Ralliart.

I must confess I didn't really know very much about the Colt Ralliart before it landed in my driveway, aside from the fact that I didn't think it would be sold in Ireland. What with emissions issues and all that other eco-nonsense, cars like this are sadly becoming few and far between unless they are powered by an über-clean diesel engine, so an honest-to-goodness turbocharged hatchback is a perfect antidote to the tree-hugging electric i-MiEV.

The Colt looks quite neat. I like the colour (white) and I like the gunmetal coloured alloys too. The Colt does look a little odd in some ways since Mitsubishi added the dramatic 'jet fighter' look to the front of the car. Giving it the Ralliart treatment has also added to the theatrics. There are, as you might expect, the requisite side skirts, rear and front spoilers to finish off the look.

Inside, it isn't anything near as spectacular. You get a nice leather covered steering wheel and leather also adorns the lever for the five-speed gearbox, but aside from that it isn't different enough from what you might find in a decent spec three-door Colt. The plastics could certainly be better and there is no switch to turn off the stability control, should you feel brave enough.

Fire up the Colt and it is a world away from the strange silence of the i-MiEV as it cranks up with a growl. The first turn of the wheel is satisfyingly heavy as the not-too-assisted steering attempts to turn the 16-inch alloys. A blue temperature gauge tells us we aren't ready for any bursts of acceleration just yet. Under the bonnet is a 1.5-litre turbocharged engine with a promised 150bhp and 210Nm of torque. I notice that the steering feels reassuringly heavy - something that is so rare in these days of over-assisted helms that so often lack any genuine feel.

Once the temperature has risen, a quick dab of the accelerator wakens the turbo and we are off. It has a deep engine note and a fair dose of torque steer too and it feels furious and potent in equal measures. Here is a hot hatch that buzzes in the best traditions of Japanese rice rockets of old. The first roundabout reveals great steering feel and, once you are aware of the tendency to torque steer, lots of grip from the front tyres. Thankfully there's not too much intrusion from the stability control either. However, on to the practical side of things... I need to go to Tesco.

The quite tiny boot didn't really cope too well with a few bags of shopping, so I had to put down the seats and remove the parcel shelf. This wouldn't be great news with some kids in the back.

I had my first proper back road spin in the Colt and it made me grin. It really is great fun. That nicely weighted steering encourages you to enjoy the car because it offers proper feedback. I love the curious glances too. Little is known about this car and I'm getting plenty of questions from suspicious-looking lads in car parks. I tell them it's just a body kit.

I get a call from my brother who has asked me to collect him from the airport and while I had considered taking our long-term Grande Punto because it has five doors and a bigger boot, I can't resist the Colt. Half way up the motorway I am starting to have some regrets. This is a noisy car, which could probably do with an extra gear, something that has been a complaint of the Lancer before. There is a lot of road and tyre noise and it's necessary to play the radio extra loud to hear it.

Having collected my brother, we struggled to get the luggage into the boot, so it was seats down again. Quickly found that trying to hold a conversation on the motorway in this car isn't easy because of how loud it is. Should have taken the Grande Punto. I have noticed, however, that the fuel economy is pretty good. If this was a Clio RenaultSport I would have been to the petrol station a couple of times already, but this little engine is doing well. The suspension is well judged too. It is firm, but it doesn't crash as hard over bumps as I thought it might, in fact it copes rather well. It is just the tyre noise that is harder to deal with.

Another quick blast on my favourite Co. Meath road (nothing too hairy, your honour) in the morning just to make my mind up for sure. I have sort of changed my mind about the steering. Yes, I like the weight, but there could be more feedback if truth be told. However, this is an honest-to-goodness hot hatch. Although, can we still call it a hot hatch since it has a "mere" 150bhp in these days of 200bhp+ being the norm? Given its likely power-to-weight ratio, and certainly from the feeling you get from the cabin, I think it deserves the moniker.

It is a bank holiday and I've done little driving in the last two days due to Guinness getting in the way and good old fashioned sloth. But, I have been thinking. The car I am staring at out the window isn't really bad value when you consider the power you are getting. The beloved Clio RenaultSport costs an extra nine grand and even the comparable Suzuki Swift Sport, which has 25bhp less and is 1.5 seconds slower to 100km/h, is €941 more expensive. A MINI Cooper S is more powerful and fractionally quicker off the line, but it's €4,646 more expensive before you start adding optional extras.

The Colt Ralliart has been joined in the driveway by the Alfa MiTo MultiAir Cloverleaf, which at €23,995 has more power and is quite a gem to drive. I think I'd find the extra money for the MiTo being honest. It is time to wave goodbye to the Ralliart and I've mixed feelings. I really liked the honest-to-goodness nature of this car. Not sure if I could live with its motorway noise though.

I'd prefer the MiTo in terms of comfort, style and fun. I doubt we will see too many Ralliart Colt's this year in Ireland and we know that we might not see too many more in the immediate future as Ralliart Inc, a wholly owned subsidiary of Mitsubishi Motors Corp, has ceased operation. We understand that Mitsubishi still owns the name Ralliart though, so all may not be lost just yet.