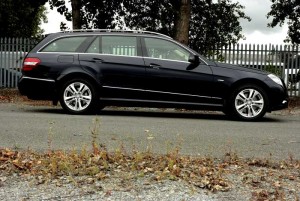 The latest incarnation of the E-Class is the spacious estate version.

With the larger SUVs now seen as something of a needless extravagance, the estate car might be due a renaissance here in Ireland where we have largely ignored this genre of car for quite some time. The new Mercedes-Benz E-Class is a car that we know is much sharper than it was before and it feels better built too. They are also much more efficient and as a result better value. With something of a price war going on between BMW and Mercedes-Benz these new cars are much more affordable than ever before. The BMW 5-Series Touring will be with us very soon and we were mighty impressed when we drove it recently, but does the E-Class deserve our full attention?

In terms of design, the E-Class Estate certainly isn't as pretty as the BMW, but it does have better proportions than previous generations of the car. This car is all about practicality though and even with the rear seats in place it has an ample 695 litres of boot space. The rear seats can be folded easily using the EASY-PACK system, which is just a fancy way of saying that if you pull a lever all the seats fold down and you get a nice flat loading floor, which add up to a potential of 1,950 litres of luggage space. There is also an EASY-PACK tailgate as standard, which is an electrically-hydraulically operated tailgate that can be opened at the push of a button from the driver's seat, at the tailgate or by using the ignition key.

This model comes with the highest output four-cylinder diesel engine. Badged 250 CDI, this is a 2.2-litre unit putting out 201hp and an impressive 500Nm of torque. In our test car it is twinned with an automatic gearbox and the whole package is very quiet and smooth. It seems a natural combination to combine the E-Class with an automatic and although some customers at the budget level are slowly moving to manual, automatic remains our choice in this car. Remember too that if you choose your E-Class with a manual transmission, you might see your salesman ducking under the desk for cover when you come to trade-in in a few years.

This car has proven to be a really superb family car over the course of our week. It has spent most of its time going up and down the M1 motorway and it makes this sort of driving a total breeze. That engine is a real gem and feels every bit as refined as a six-cylinder diesel. We never really did explore this car's load carrying potential but for someone who does like to throw a mountain bike into the car sometimes it would be our choice of the E-Class models. While our test car was just short of €63,000, the Estate starts at €44,185 and that is brilliant value.