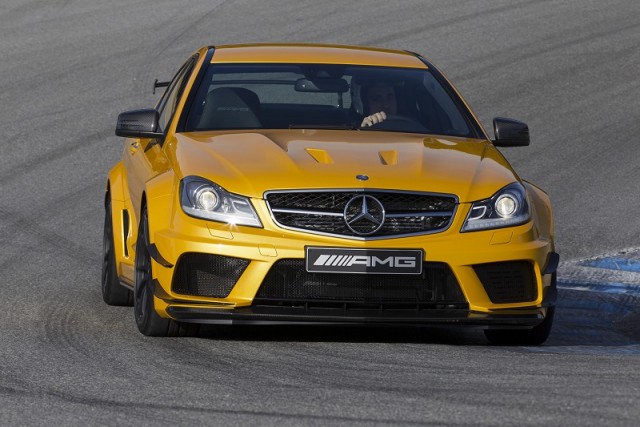 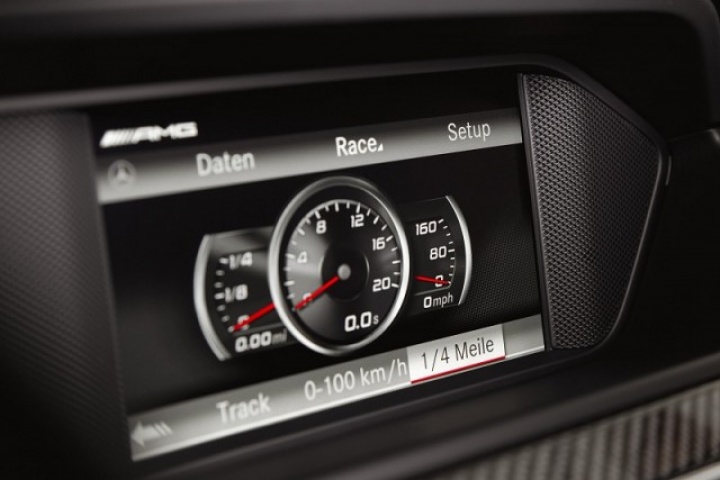 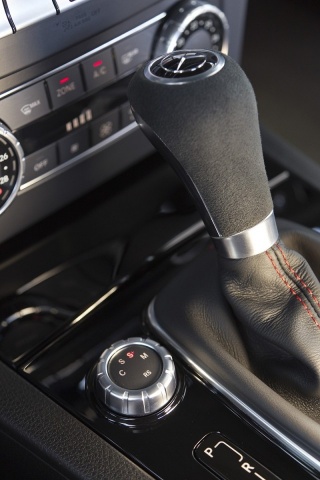 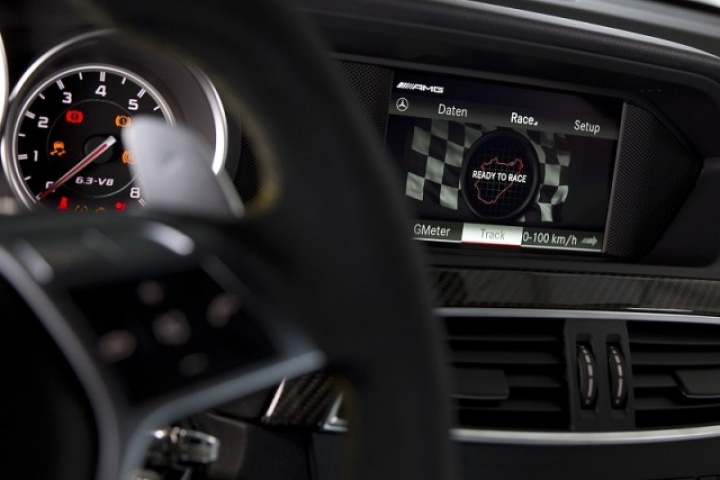 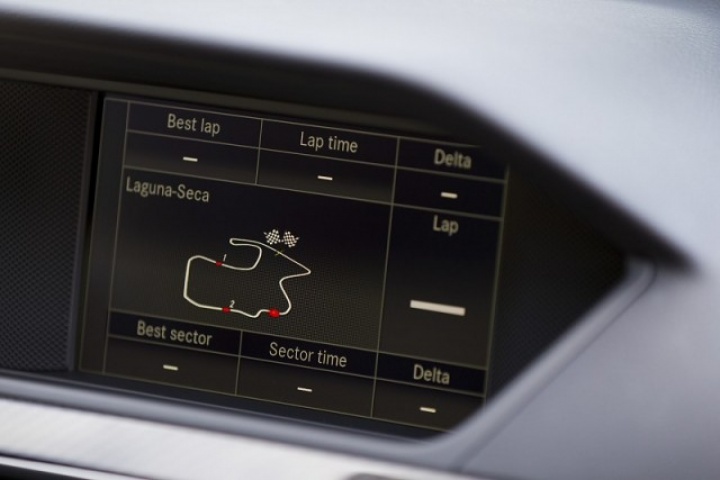 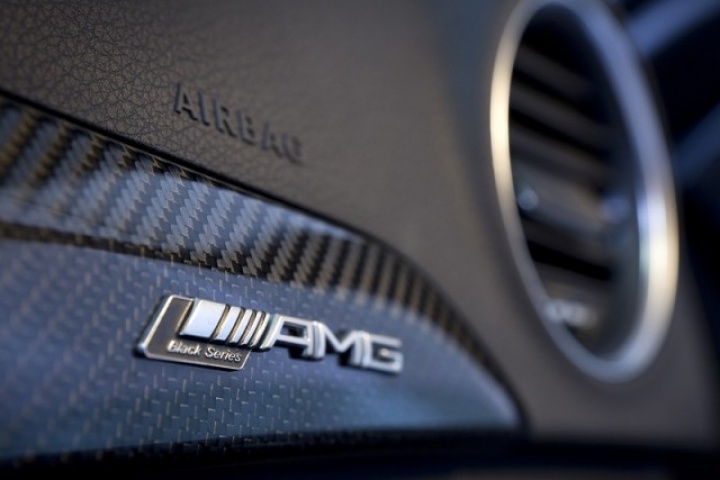 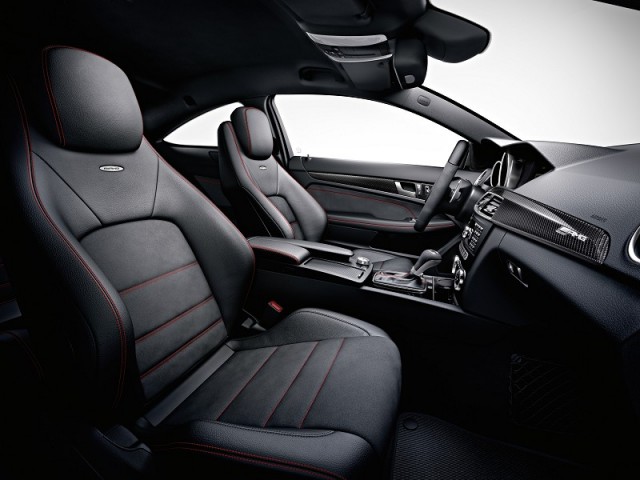 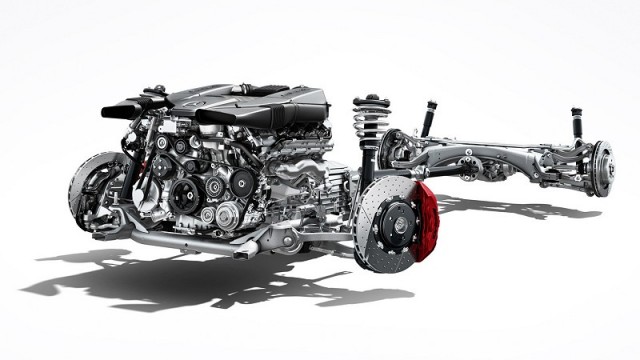 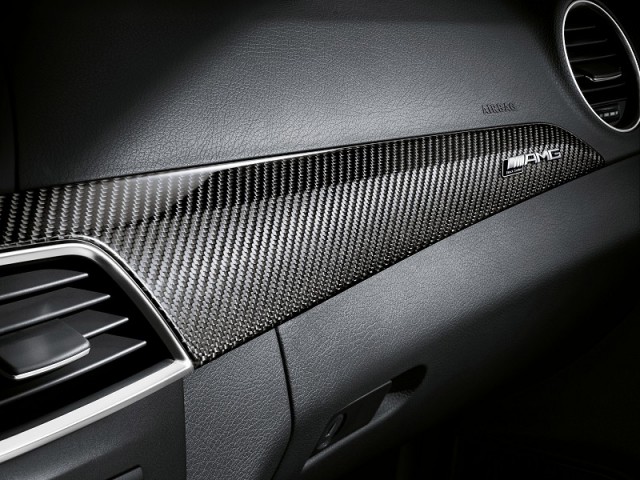 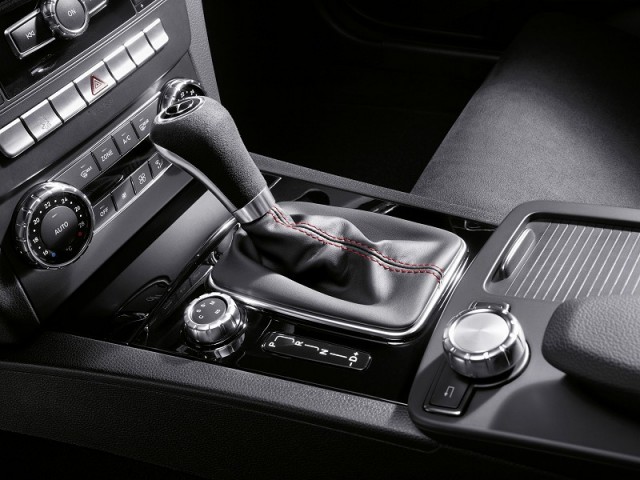 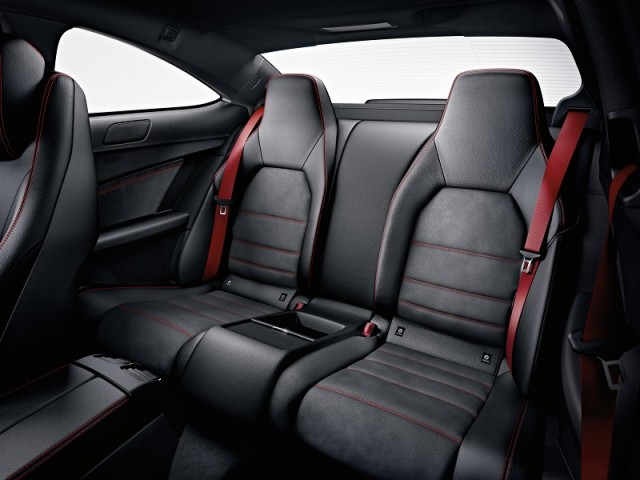 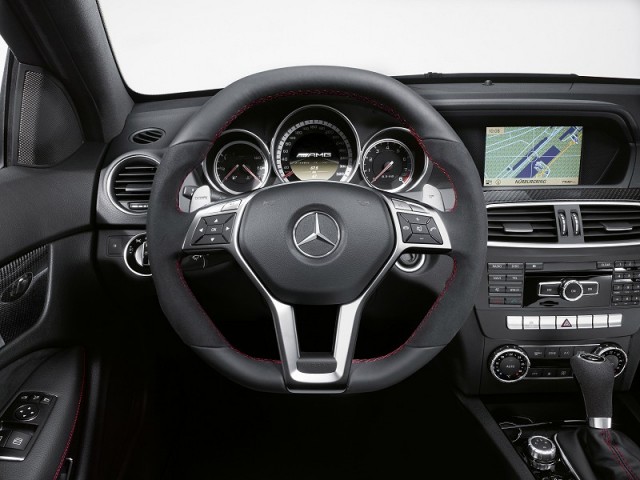 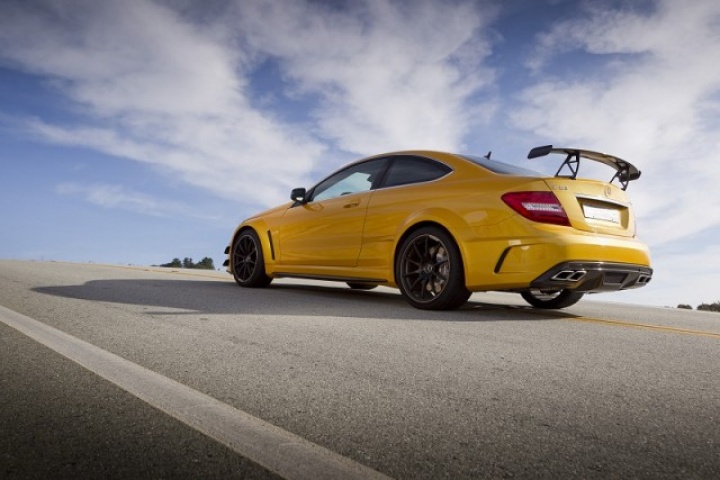 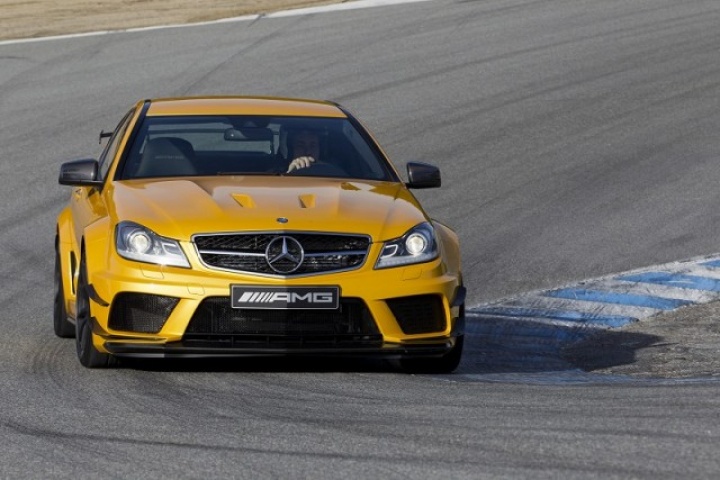 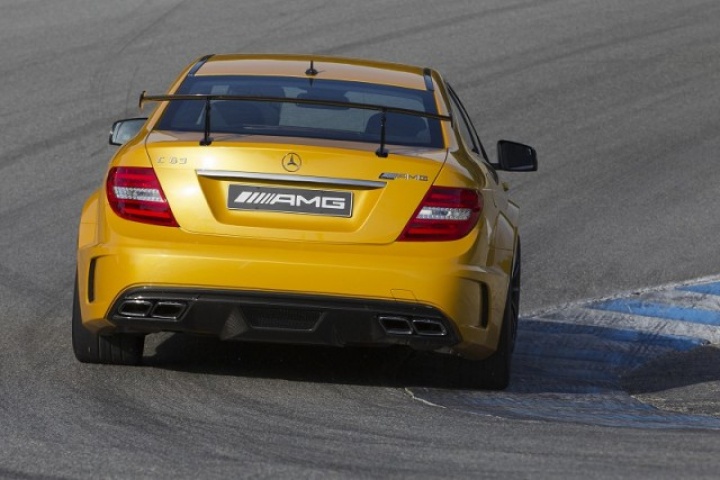 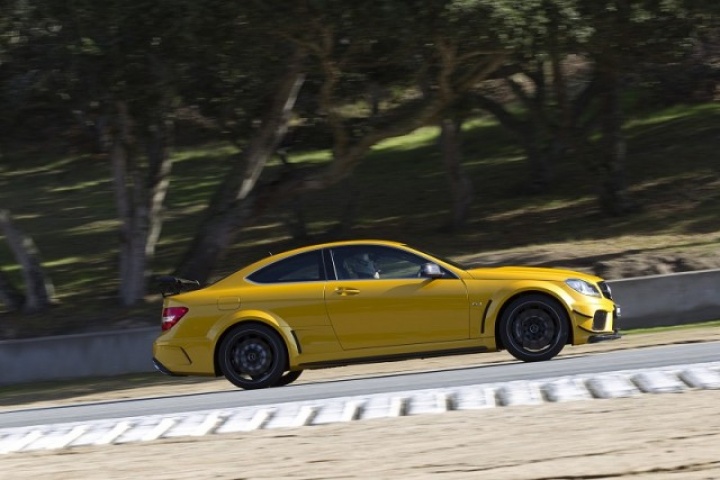 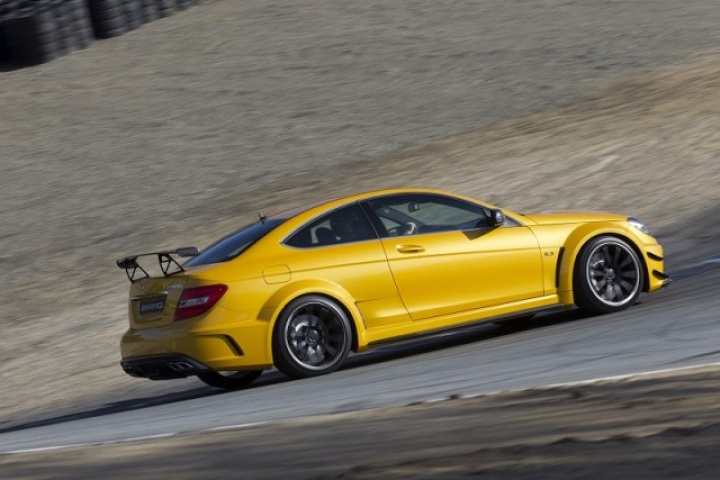 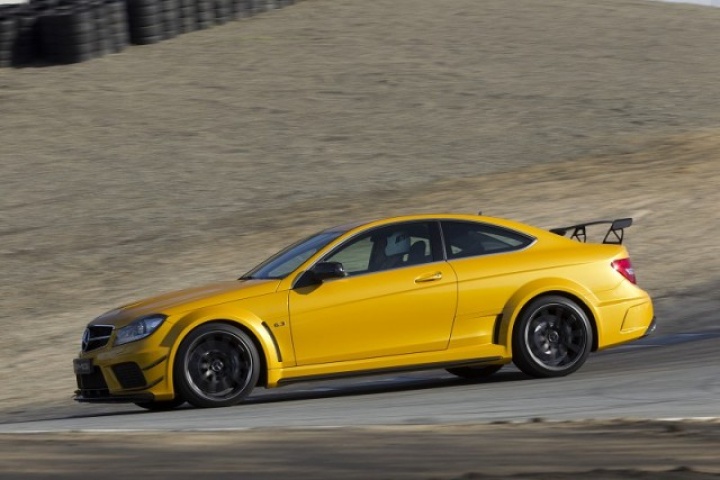 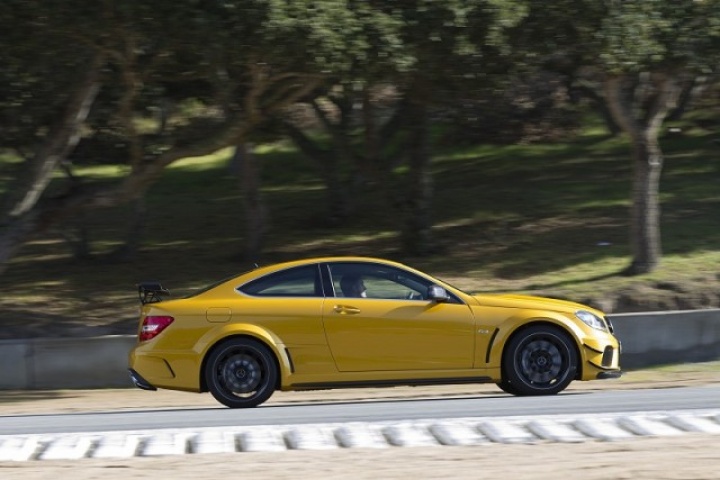 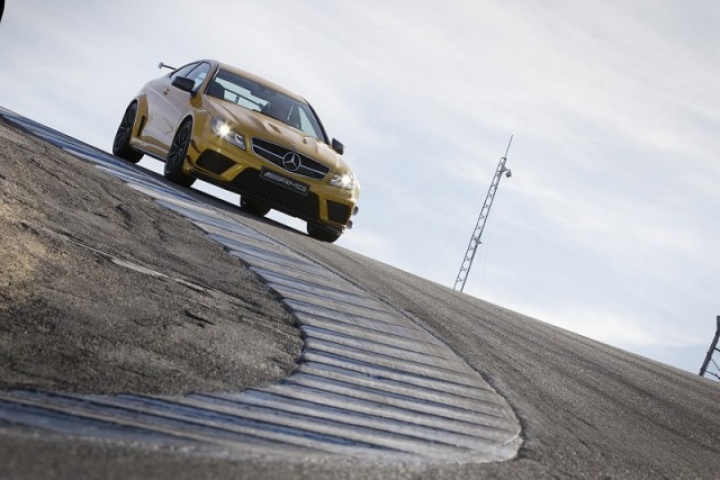 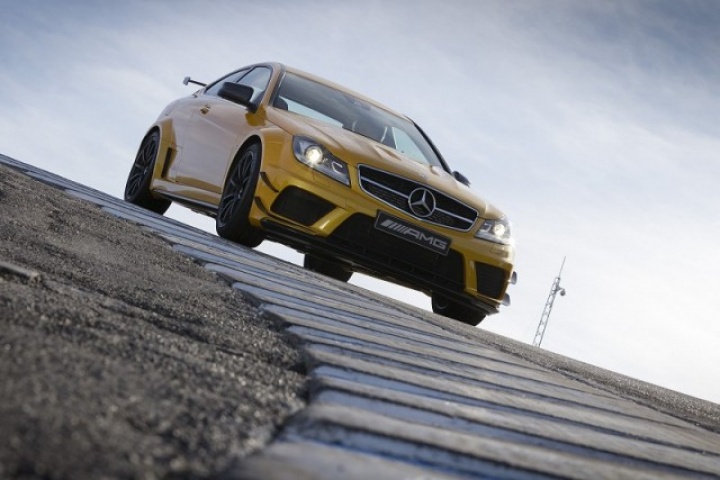 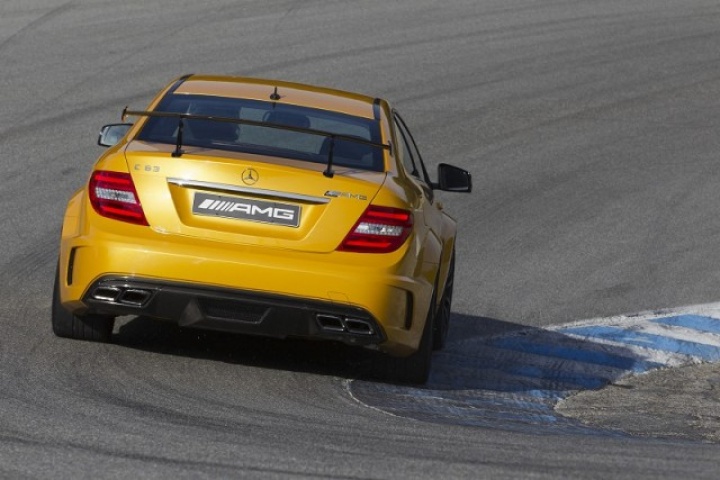 New Black Series model gives a dark side to the C-Class Coupé.

The most hardcore Mercedes C-Class Coupé yet, the C 63 AMG Black Series boasts a specification more suited to a racer than a road car. But it's much more than just the sum of its incredibly long parts list, and all thoughts of a regular model with some choice tweaks soon disappear when you slip behind the wheel.

Think of a C-Class Coupé that's been broadcast through an amplifier turned up to 11, and you still won't get close to the visual impact of the C 63 AMG Black. If ever there was a car that could visually kick you in the nuts, then the latest model from AMG is it. Fit the optional track pack, with its carbon fibre wing and aerodynamic canards, and that visual swing to the nether regions looks fiercer than ever.

The front wings are 28mm wider, and the rears 42mm - on each side - to cover the extended track and 19-inch wheels while the front end features a much more aggressive design with gaping intake grilles. A series of vents both in front and behind the extended arches are there for functional reasons, but add even more visual aggression and the deep diffuser and pair of square edged twin exhaust pipes leave you in no doubts to the car's hard-edged focus.

Open the door and at first glance you could be forgiven for thinking the cabin fails to live up to the drama of the exterior. Certainly the dashboard layout, trim and construction will be familiar to any C-Class driver, but look closer and the C 63 AMG Black shows its true colours.

Behind the comfortable (but kidney-squashing) front bucket seats with their fixed backs you'll see the rear chairs have been dispensed with in a bid to save weight, while sections of the flat bottomed wheel and gear lever are swathed in Alcantara. Of course the instruments are emblazoned with the AMG logo and carbon fibre is used throughout. It's no practical people mover, but despite its track intentions there's still satnav, climate control and a decent audio system.

If you think the C 63 AMG Black Series looks dramatic, then let me assure you, until you have sat behind the wheel and prodded the throttle, you ain't seen nothing yet. Even at idle the 6.2-litre V8, an engine unveiled back in 2005, rumbles away with intent, the subtle vibrations filtering through the cabin and getting under your skin.

Blip the throttle and the revs shoot up quickly, a legacy of the Black borrowing its forged pistons, connecting rods and lightweight crankshaft from the SLS AMG supercar. Not only is the response to the (very) loud pedal improved, but it also reduces the powerplant's weight by 4kg - and every gram counts when it comes to finding time on track.

And despite the fact it's road legal, the C 63 AMG Black is very much aimed at those who want to experience the car's potential on a race circuit - for a start its levels of talent are far higher than any speed-limited road would ever allow. As expected the standard car is hardly a dynamic duffer, but those chasing the last few tenths should look to specify the optional Track Pack - the carbon fibre rear wing and other aerodynamic aids not only look cool, but improve the grip and therefore speed able to be carried through a turn. Dunlop track-orientated rubber also comes as part of the package, reducing the 0-100km/h time by three tenths at 3.9 seconds, though the electronically limited top speed remains the same 300km/h. All C 63 AMG Blacks come with race inspired coilovers, so the ride height and damping specifications can be altered by the customer - though the AMG engineers believe the settings from the factory are optimum.

Of course you could expect this car to be very clinical, simply producing a set of startlingly impressive numbers, but that isn't the case. There's no doubt it's truly efficient in what it does, but it also provides plenty of feedback for the driver. Sure the steering is light, but it's sharp, accurate and communicative. And though some might crave a manual gearbox, the wet-clutch (replacing the power sapping torque converter) equipped automatic is incredibly responsive, even when left to its own devices. Dive into a corner too quickly and there is some understeer, but modulating the throttle soon adjusts the line and prodding the pedal hard soon sees the rear swing its way round into a controllable slide. But grip levels are so high, to get to that stage you would have to be going very quickly indeed and ignoring all of the feedback channelled through to the cabin.

Most of your money is clearly swallowed up by that brilliant 6.2-litre V8 engine with its SLS-inspired components. But after that you've got bespoke bodywork, race inspired aerodynamics and adjustable coilover suspension. Inside you've got bucket seats, though regular AMG chairs with individual rears are also available as an option. Still, there's no lack of creature comforts, and all models come with climate control, a premium hi-fi with Bluetooth connection and cruise control. Options include DAB radio, a reversing camera and even in-car internet access.

The optional AMG Performance Media system (as seen in the SLS) is well-worth adding if you plan to use the car on a race circuit. The central screen not only displays engine data, but you can also trace your route (and times, g-forces, braking and throttle pressure and steering input) around the circuit. If you encounter a track not represented on the system, you can even record your own by driving around and asking the sensors and GPS meter on the car to trace the layout - ready for you to set the some fastest laps.

From first glance you can tell the C 63 AMG Black Series is going to be a special car, but it's not until you actually experience it in motion that you can really appreciate its talents. Outrageous acceleration, mind-bending levels of grip and braking ability and wonderful chassis balance don't tell half the story though - it's the levels of feedback, involvement, excitement and driver engagement generated - even at low speed - that really set this car apart.