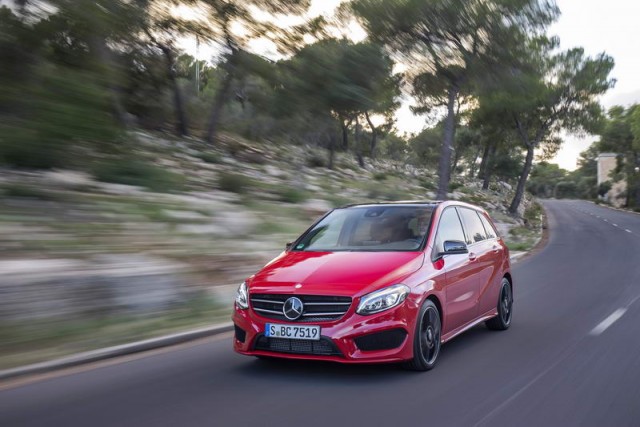 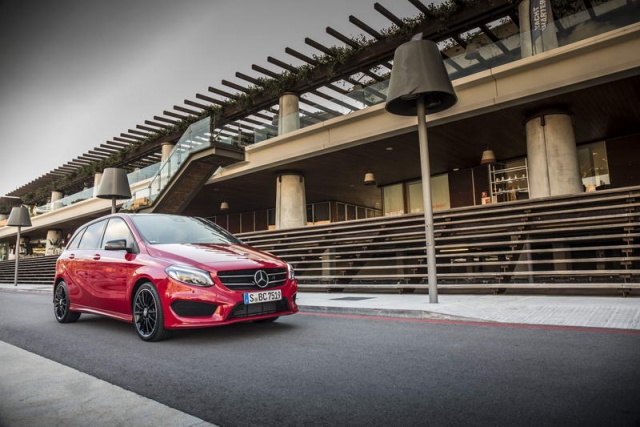 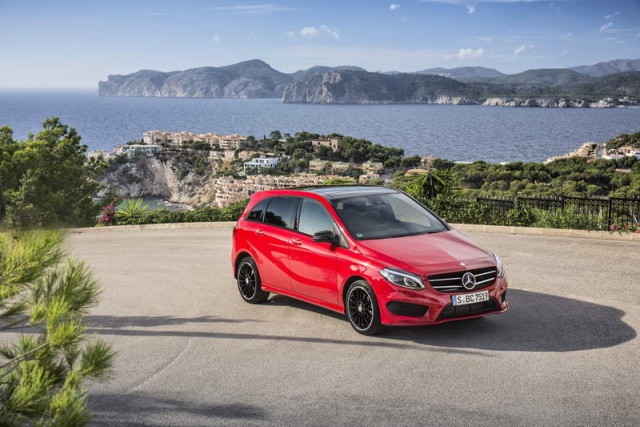 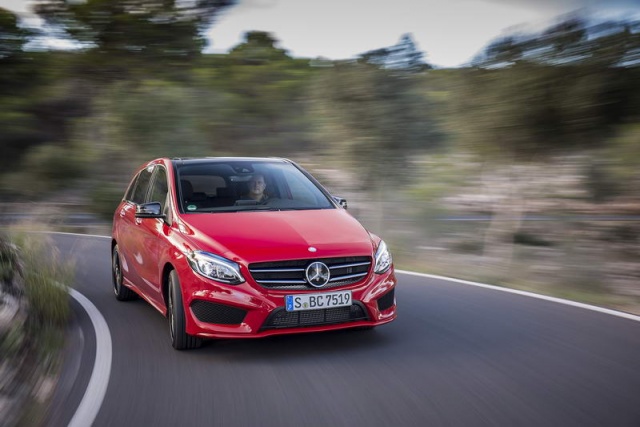 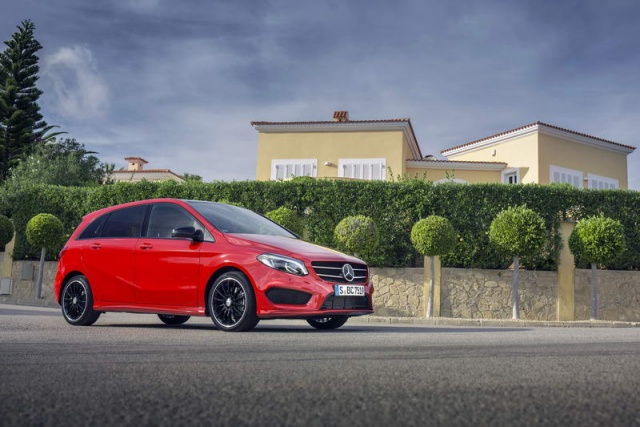 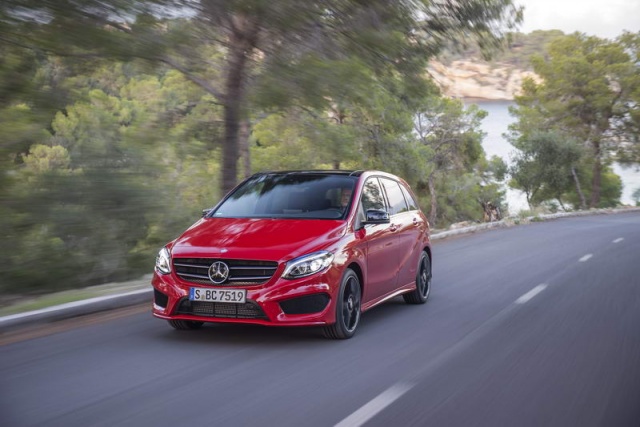 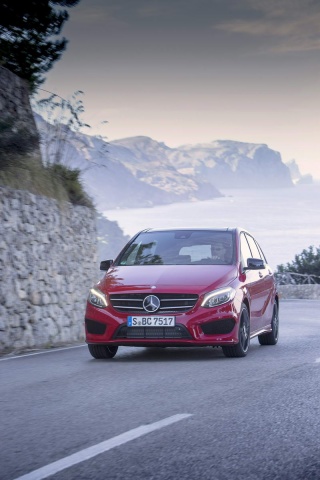 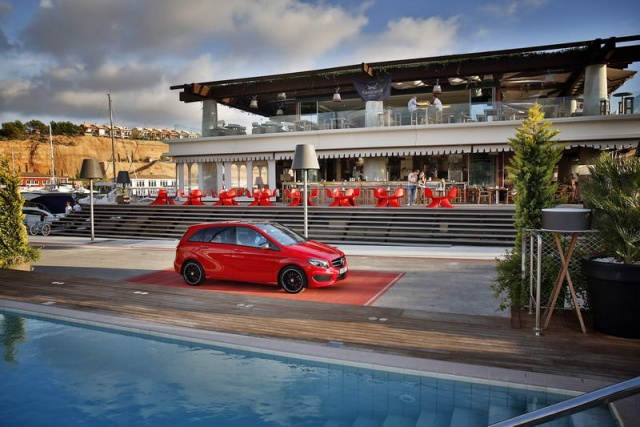 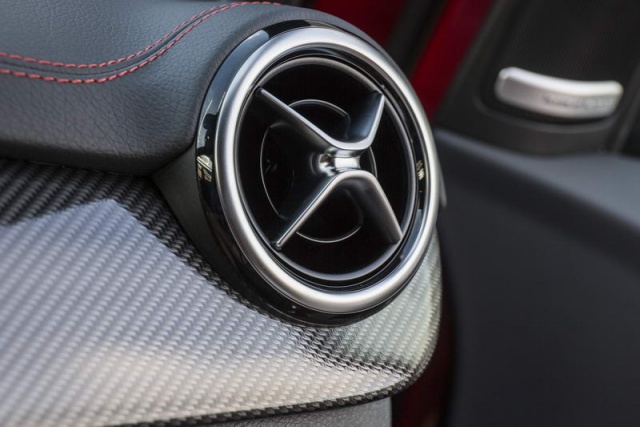 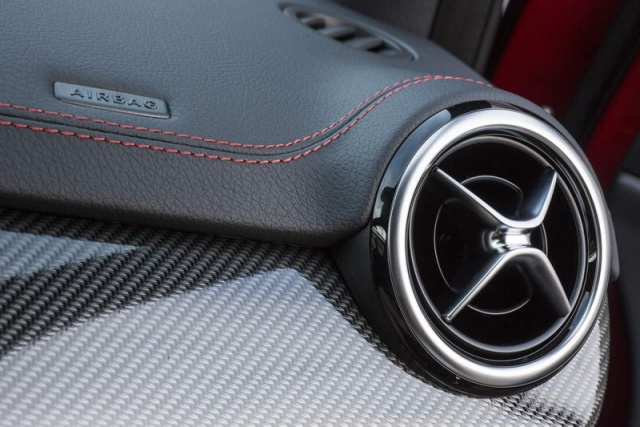 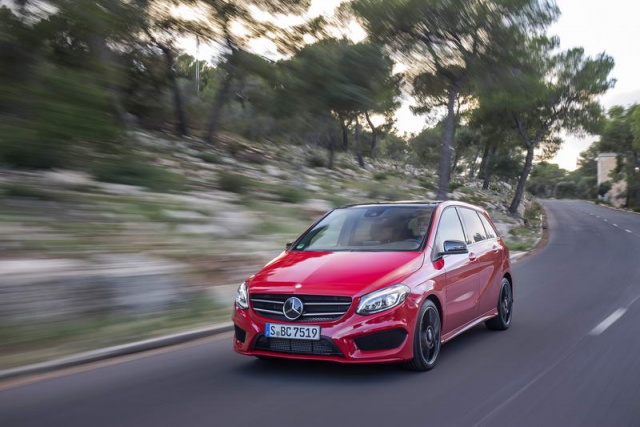 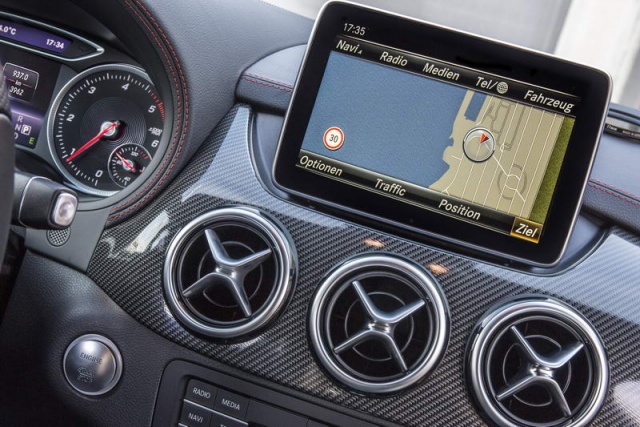 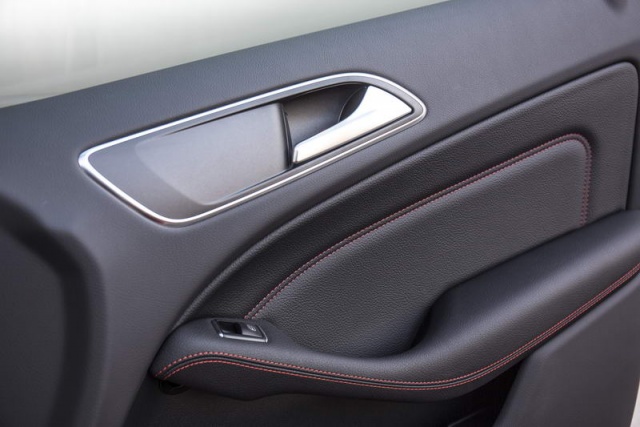 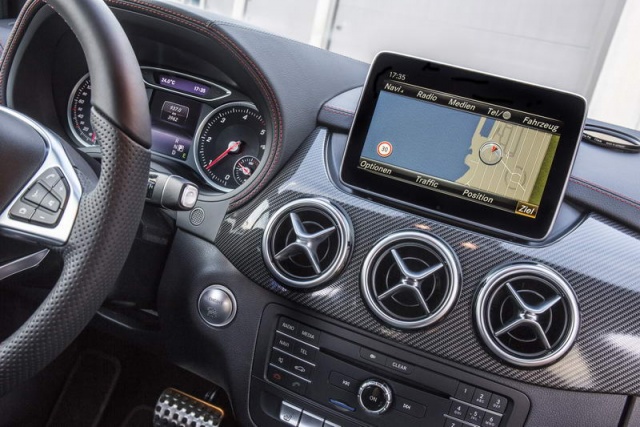 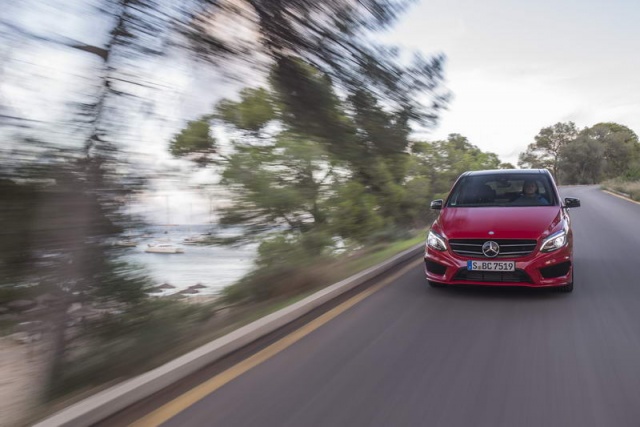 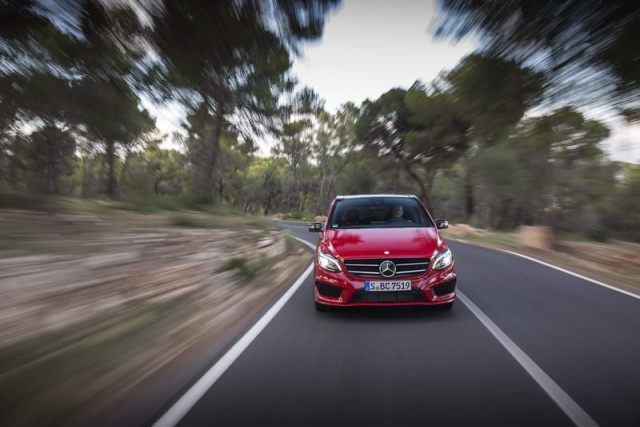 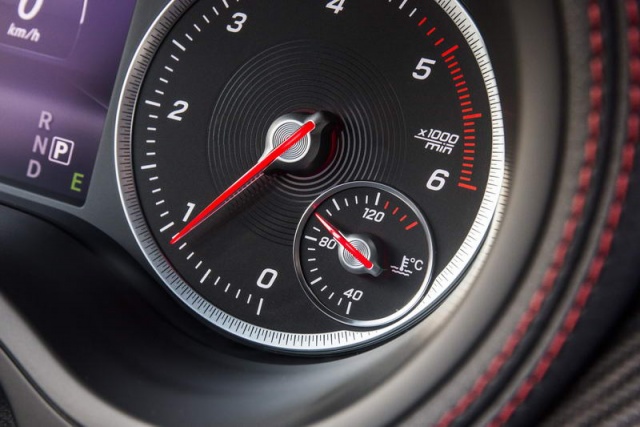 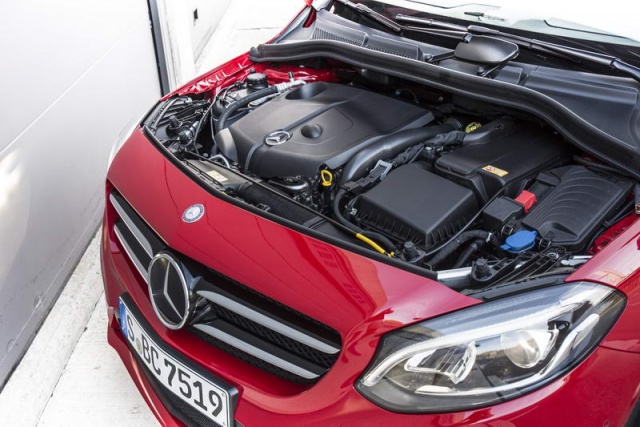 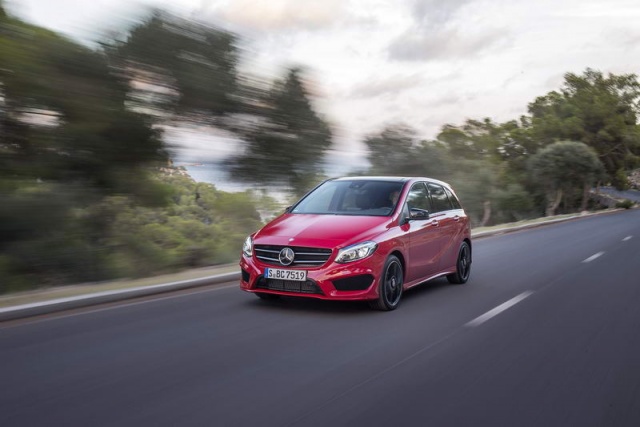 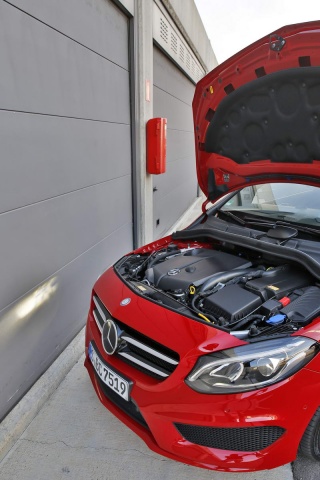 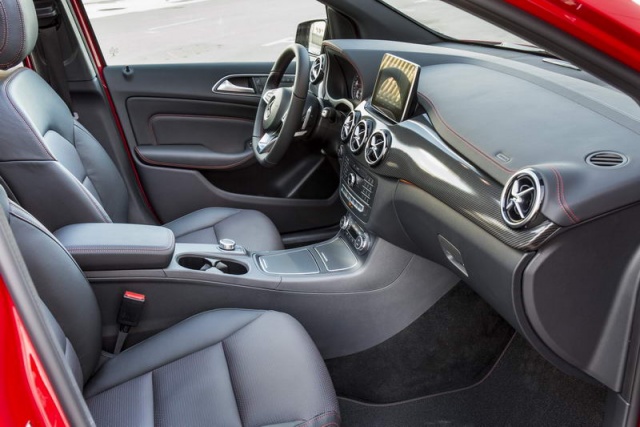 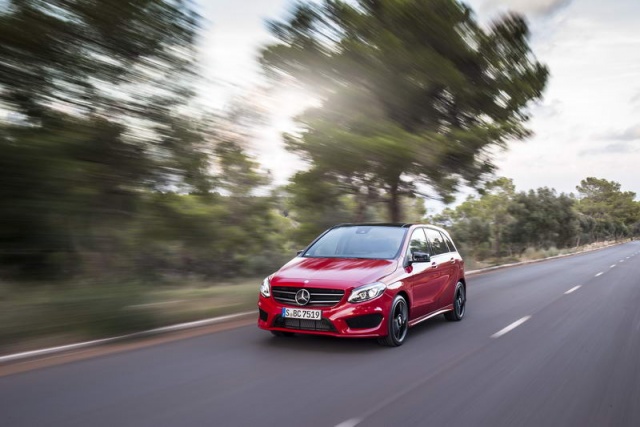 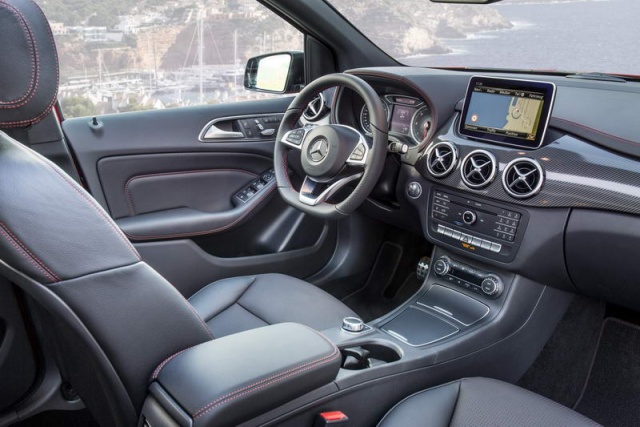 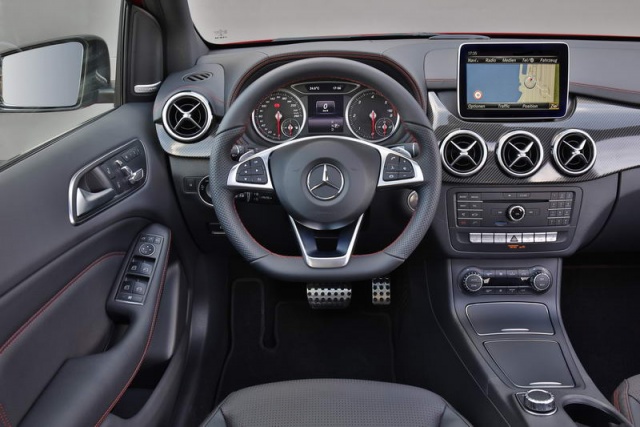 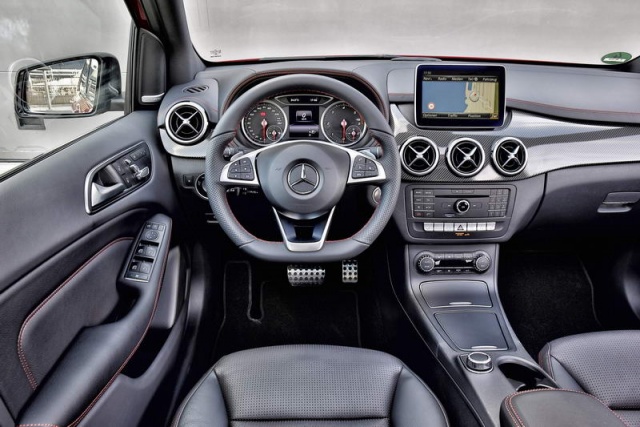 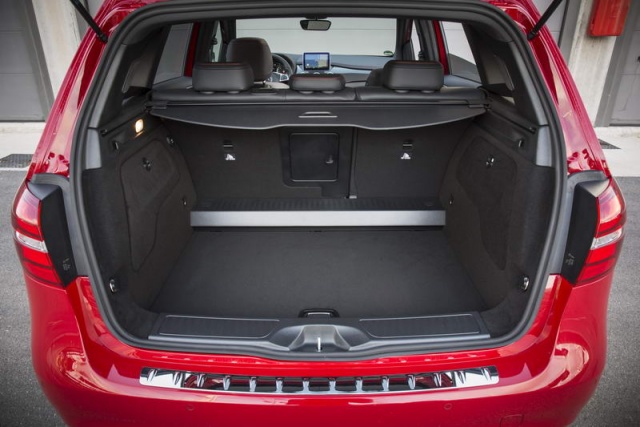 The B-Class mini-MPV has had a mid-life facelift in a bid to stave off the Golf SV and BMW 2 Series Active Tourer.

The Mercedes-Benz B-Class looks a little fresher and gets a few worthwhile interior upgrades. The new model range has a higher starting price than before, though that's partly to do with a higher entry-level standard of equipment. The basic recipe is unchanged though: it's a spacious and comfortable compact MPV.

The exterior updates to the Mercedes-Benz B-Class are minor, though best showcased in the top-of-the range AMG Line model pictured. New bumpers front and rear, new LED lights (plus other optional high-tech units up front) and a restyled radiator grille sum it up, though fresh colours and wheels are also available, and the AMG Line is new to the range, adding considerably to the design.

Inside, the biggest changes are to the instruments. They do look more modern, but the markings are a little small. Also new is a larger infotainment screen high up on the dashboard, which can be upgraded to an eight-inch item. The interface is quick and easy to use, though the menus are not always intuitive. Owners will soon get used to it. Elsewhere there are new material finishes available and variable ambient lighting. As ever the B-Class majors on space, with a versatile rear seat layout, a large boot and a relatively high up seating position.

If you took any notice of the test car specifications above you'll have seen that we drove the B 200 CDI 4Matic model, which is all but irrelevant to the Irish market. There is no demand for all-wheel drive in this segment, plus it's only available with an automatic transmission, which ramps up the price considerably. The seven-speed dual-clutch automatic gearbox is smooth enough and suits the laid back nature of the B-Class, though left to its own devices our car felt curiously underpowered on twisty mountain roads, despite a quoted 177hp maximum output. Taking over control of the gear-changing (via the high quality paddles mounted behind the steering wheel) helped, but have no fear: this isn't a car made for relishing such roads. It wallows about on its springs and offers the driver slow, long-winded steering, but thankfully it does major on comfort and refinement. If you like to press on in your car look elsewhere, but most people will enjoy the relaxing gait - it's perfect for long motorway journeys for instance.

Reflecting demand for well-equipped cars as standard, Mercedes-Benz Ireland has done away with the basic entry-level B-Class, so the range starts with the Style version, at about €31,000. That's for the likely best-seller, the B 160 CDI. Its 1.5-litre diesel engine puts out 90hp and 240Nm of torque, plus emissions of 108g/km in manual guise, meaning an annual tax bill of just €190. Urban and AMG Line are the other specifications offered.

Full specifications of the Electric Drive car have yet to be released, but indications are that it will cost significantly less than €40,000 once the VRT rebate and SEAI grant are taken into consideration.

Mercedes-Benz has upgraded its safety systems on the B-Class, most notably Attention Assist and Collision Prevention Assist Plus. The former now has a five-stage bar to illustrate the driver's attention level. The latter is an extension of Collision Prevention Assist, which has been standard on the B-Class since 2011. It is credited with reducing rear-end collisions since then to the tune of 14 per cent. The 'Plus' system adds autonomous braking, right down to a stop. Mercedes reckons there'll be another 30 per cent reduction in collisions because of its introduction.

Although we didn't drive a version of the new Mercedes-Benz B-Class that is representative of those that will be sold in Ireland, it did indicate that improvements have been made to ensure the B-Class remains relevant. While it's not a car to get excited about, it's still a high-quality product that majors on comfort, refinement and space. And of course the three-pointed star on the grille is more prominent than ever.