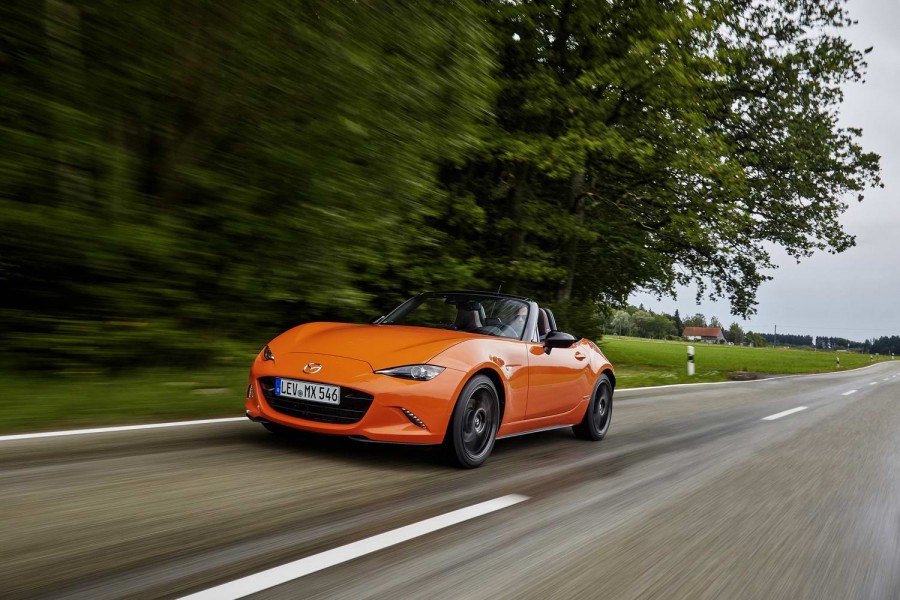 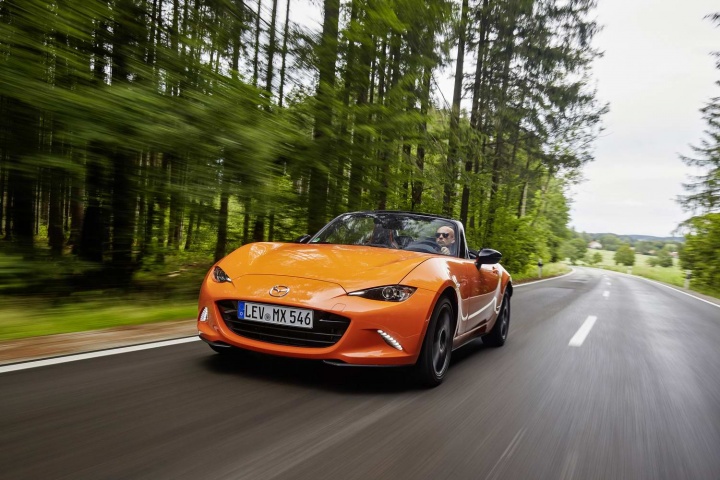 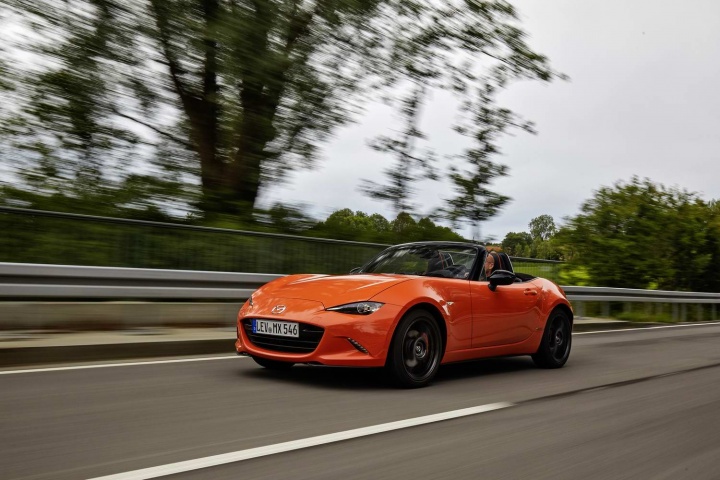 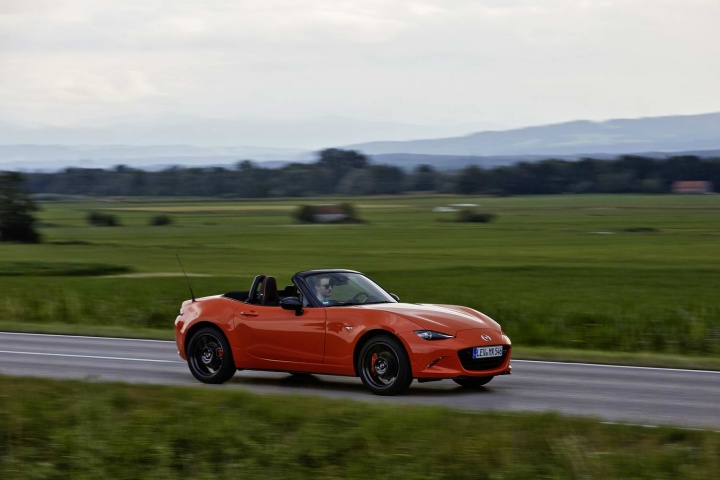 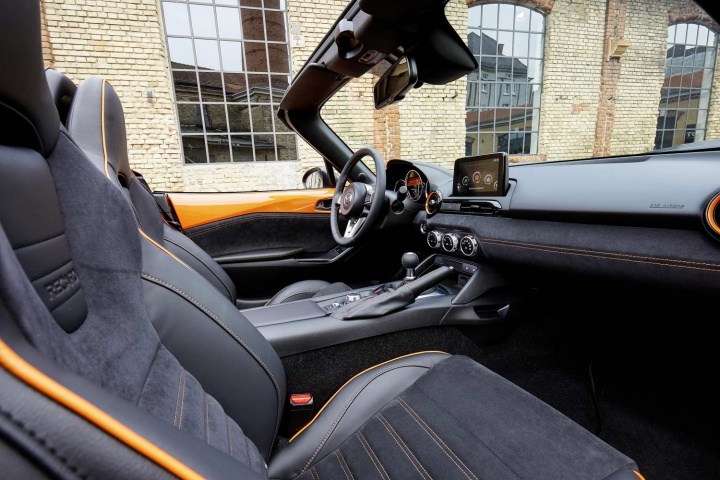 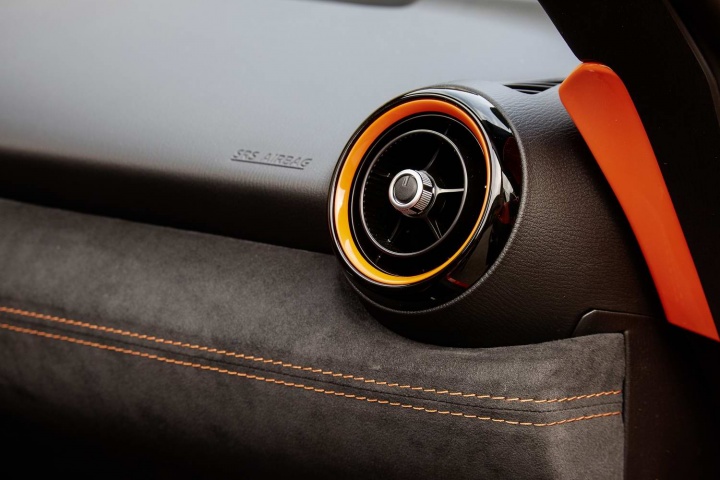 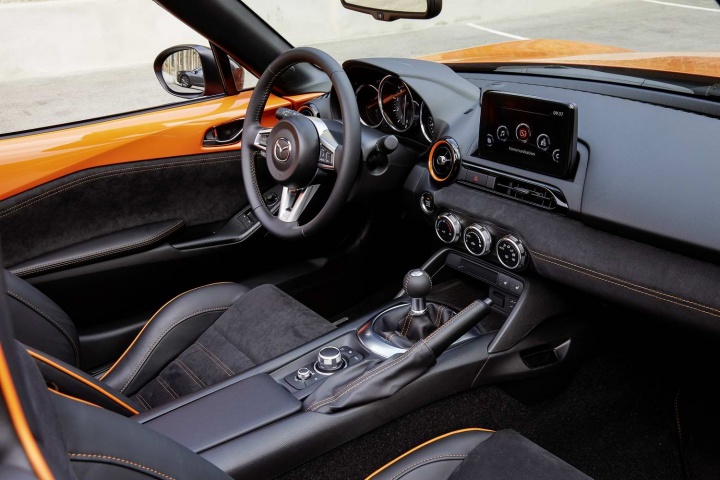 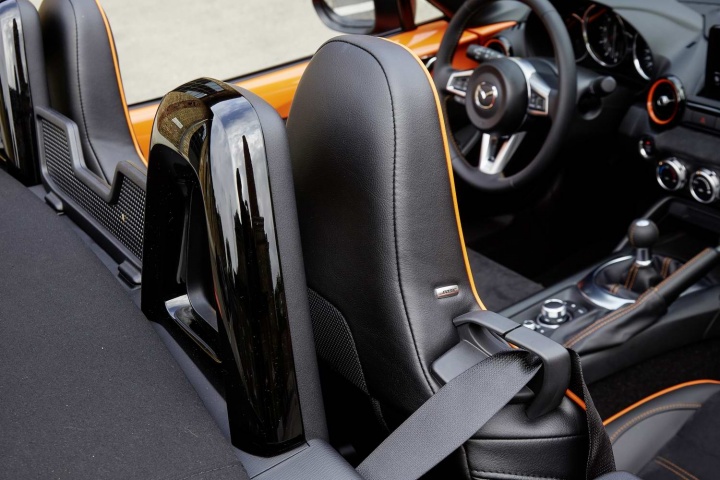 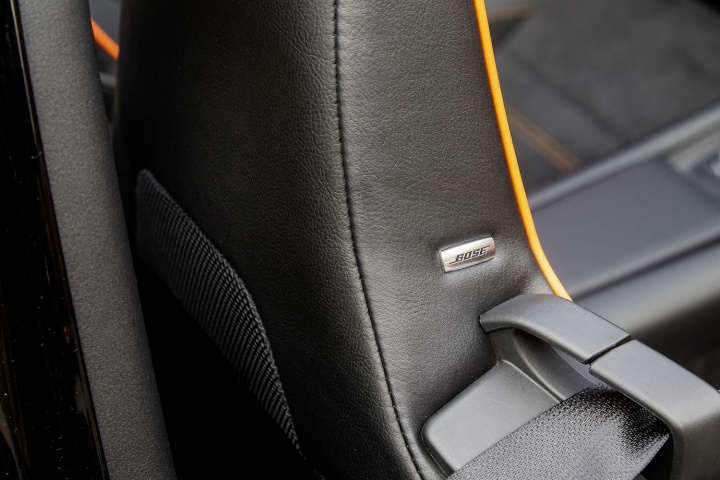 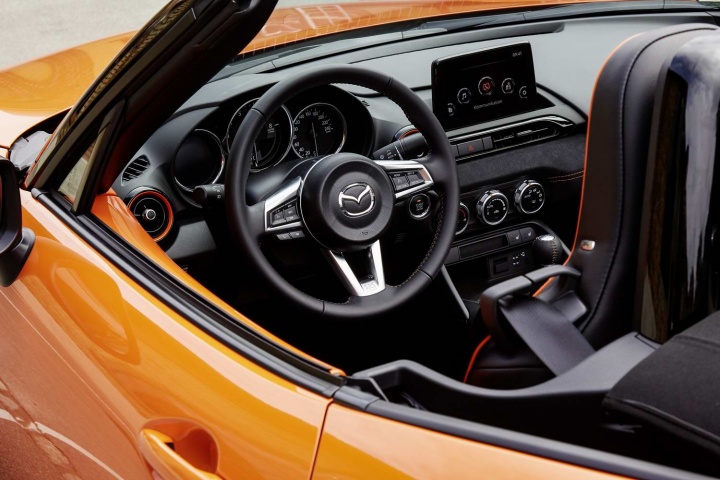 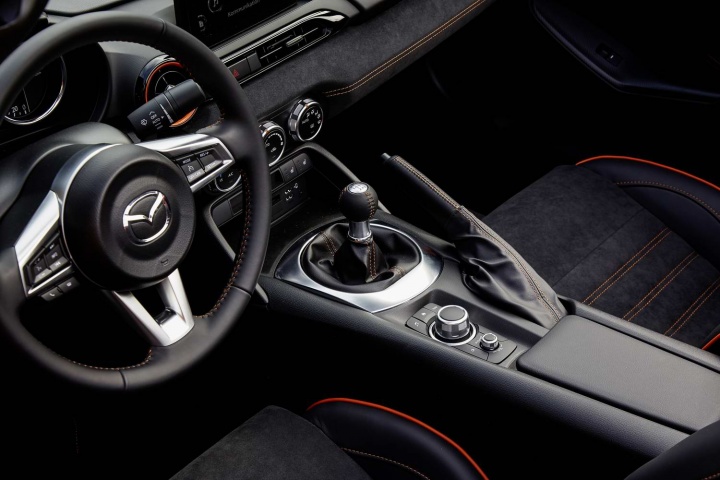 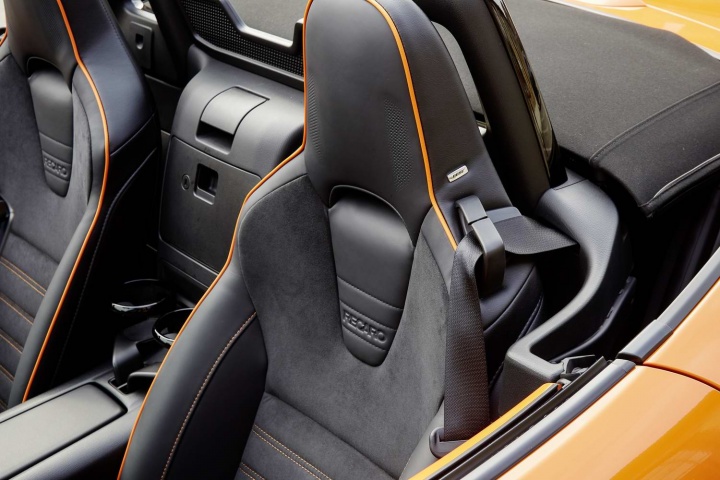 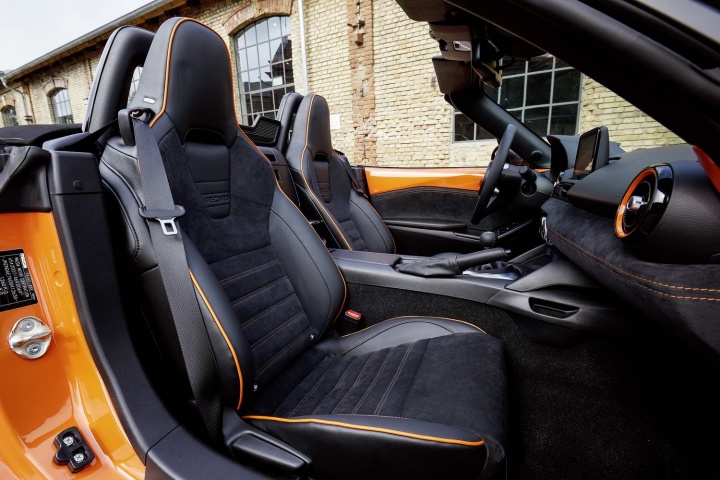 Mazda’s MX-5 celebrates its 30th birthday this year by getting a spray tan.

Mazda's evergreen sports convertible, the MX-5, turns 30 this year and so here's a celebratory model. Which, er... isn't green at all, but actually searing orange. And expensive. So, is the 30th Anniversary Edition worth checking out?

If you don't like orange, then this is really not going to be the car for you. Mazda is celebrating a big milestone in the life of its most recognisable model, the MX-5 sports car. Launched way back in 1989, this brilliant little machine has just turned 30. And so, to mark the occasion, Mazda has given it a lurid spray tan, fitted a few accoutrements, limited the build numbers and given us the MX-5 30th Anniversary Edition you see here.

You cannot spec it in any finish other than Racing Orange, mind. Now, we happen to think it looks rather splendid in this hue - especially with its bespoke gunmetal Rays 17-inch alloys, which aren't found on any other MX-5 - and it also answers a call from Mazda owners, who requested that the company offer some brighter shades for its open-top rear-driver. However, if you're thinking that Racing Orange has some sort of link to the illustrious 787B, which won Le Mans in 1991 with its screaming quad-rotor Wankel engine and magnificent orange-and-green Renown livery... think again. It doesn't. Mazda just thought orange would be appropriate for the birthday-bash model.

The 30th Anniversary Edition follows this formula. It's basically Roadster GT specification, plus the Racing Orange solid warpaint, engraved Rays ZE40 17-inch alloys, black mirror caps, an external build number plaque on the driver's side only (this is an MX-5 Anniversary Edition hallmark through the ages), heated Recaro seats with Bose speakers and a black leather/Alcantara combination with orange stitching, more orange stitching on the leather-trimmed steering wheel and gear knob, even more orange stitching on the door panels and dash fascia (with more Alcantara, too), yet more orange ringing the insides of the circular air vents, the fitment of Apple CarPlay and Android Auto to the Mazda MZD Connect infotainment, Brembo front brakes and rear Nissin brakes with, yes, orange callipers, and a set of '30th Anniversary' floor mats (orange-detailed, natch). Otherwise, mechanically, it's exactly the same as a 2019MY 2.0-litre MX-5.

The shift from the 160- to 184hp engine, which we reported on at the first drive event last year, is hard to sum up in words. Sure, the car gained a mere 24hp and a slim 5Nm in the update, but the change is worth far more than mere numbers on a page can even hope to convey - for one thing, it finally settled the debate about which engine was best for the Mk4 MX-5, the 1.5 or the 2.0.

It's the 2.0-litre. The way this thing spins out and revs for its 7,500rpm redline is just majestic. It's so sweet and so inertia-free and so insistent, and it finally makes the MX-5 feel properly quick, rather than acceptably brisk. Stretch the 30th Anniversary Edition out in the first three gears and you'll be doing serious speeds, while it even sounds excellent - sporty, unfettered by augmentation, a classic old big-hearted sports car motor, only sympathetically refined for the 21st century.

This engine is mated to one of the best six-speed manual shifts in the business right now, all tight-of-throw, engineering perfection and solid heft. It's a lovely thing to operate and, in further wonderfulness, heel-and-toe in the MX-5 is a cinch (even for the untalented like this correspondent) so you can have real fun blipping the car down the gearbox as you brake for turns and junctions. The steering is excellent, the damping has that gorgeous, supple character that denotes any MX-5 - you get more body lean, pitch and dive than you would in other sports cars, but these only more clearly telegraph precisely what the Mazda is doing to the driver - and the Brembo/Nissin brakes are strong, trustworthy and communicative.

Sure, you can read between the lines here and say you'd get 99.99 per cent of this driving experience from a regular 2.0-litre MX-5 and you wouldn't have to put up with the orange glare of the bodywork/cabin detailing... but if you like the orange paint (we do) and you understand the importance of the MX-5 in motoring history (we also do), then the 30th Anniversary Edition starts to make a whole lot more sense.

Exclusivity. At the time of writing, 3,000 are being built for the entire planet and while the UK is getting 550 (split 370 Roadsters and 180 RFs), our allocation is much smaller at just 10 examples. Also, we're not taking the RF version here, just the Roadster.

There's also an anomaly with the MX-5's tax band. Officially, the 30th Anniversary Edition churns out 156g/km, which places it right at the bottom of Band D (€570 per annum). However, Mazda Ireland claims it only emits 155g/km, which would see it squeak into Band C (€390 per annum) by the skin of its teeth. Hopefully, it will qualify for the latter here, saving a useful €180 annually on tax.

The Mazda MX-5 30th Anniversary Edition almost looks like it is targeted directly at diehard enthusiasts of the car, where it will one day be a mild curiosity at future MX-5 Owners' Club meets. And you could lament the fact that Mazda didn't take the opportunity of the MX-5's 30th birthday to give it the expensive presents of a 200hp+ output and some serious chassis hardware to match.

Or... you could just join in the celebratory mood, marvel at the fact the MX-5 has been such a hit these past three decades, bag yourself a 30th Anniversary Edition and then revel in owning a quite brilliant sports car with a striking appearance and a little bit of limited-edition goodness mixed in, all for a semi-reasonable price. This Mazda is most definitely a car that does not need to be over-analysed; buy it, and you’ll adore it. 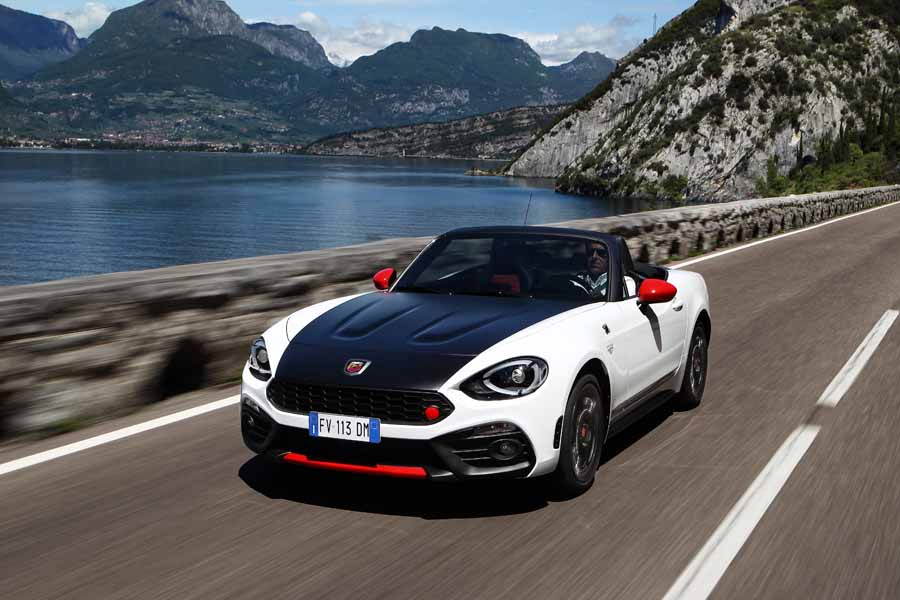 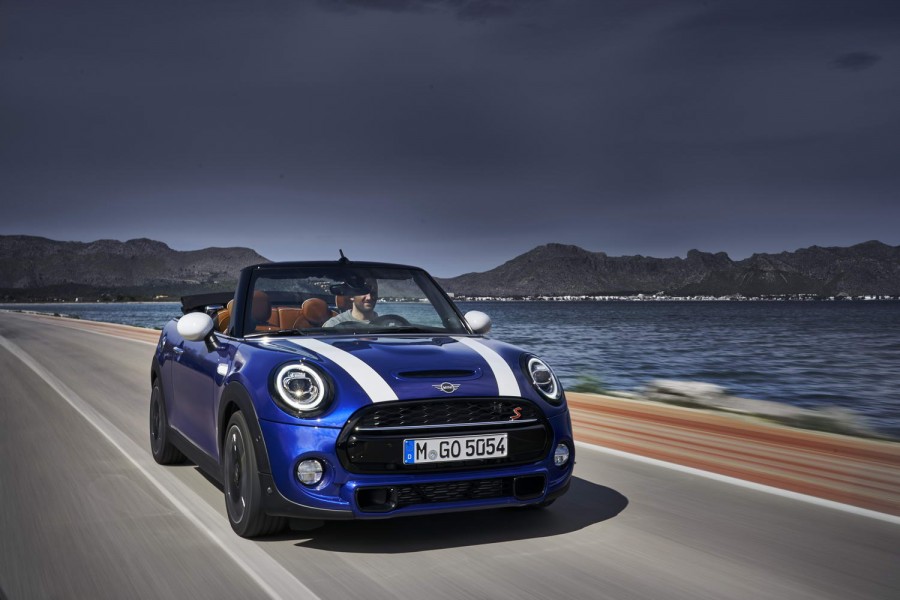 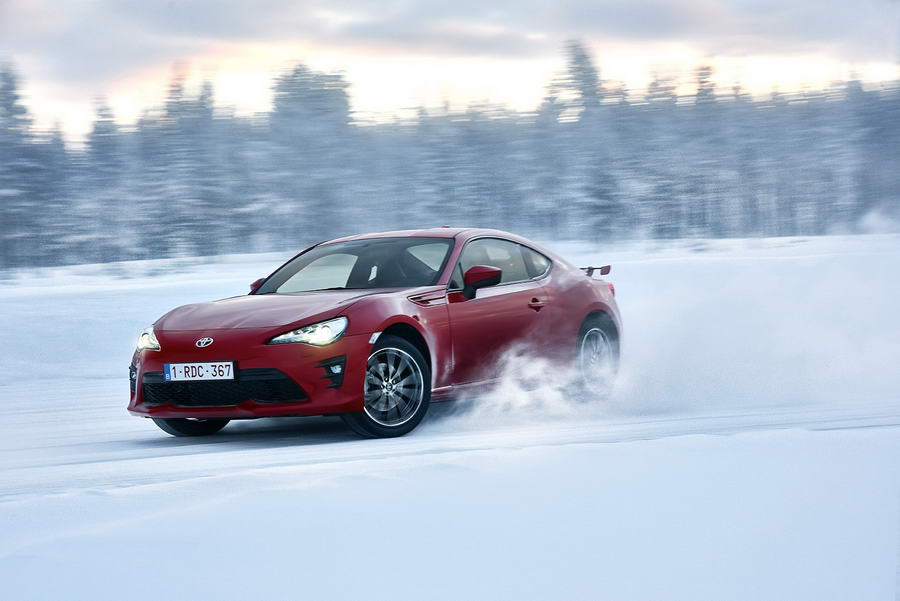 Toyota GT86 review
Toyota GT86 vs. Mazda MX-5 30th Anniversary Edition (2019): you might not be able to drop the top on the GT86, but this is so similar to an MX-5 - Japanese, lightweight, rear-wheel drive, normally aspirated, terrific fun if not blisteringly fast... and about €42,000.