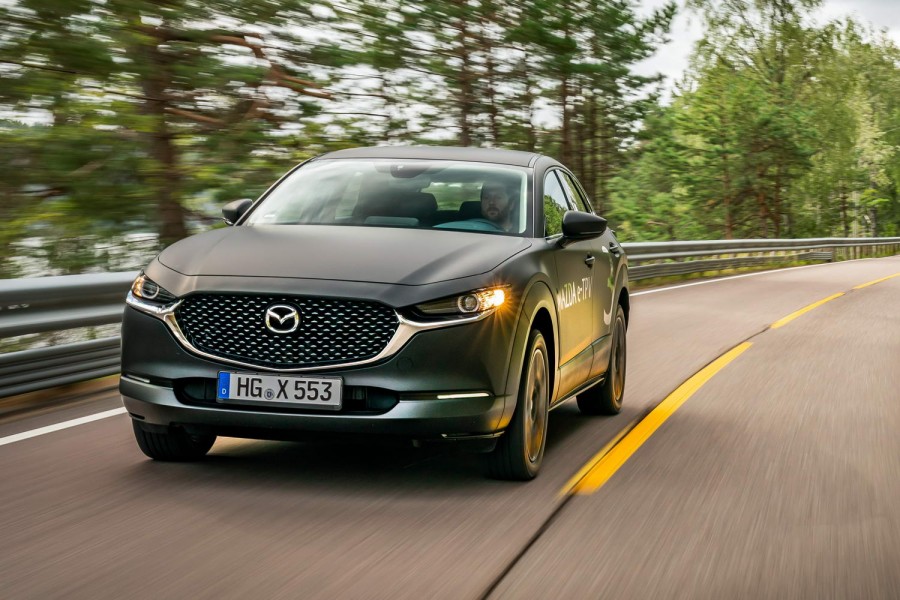 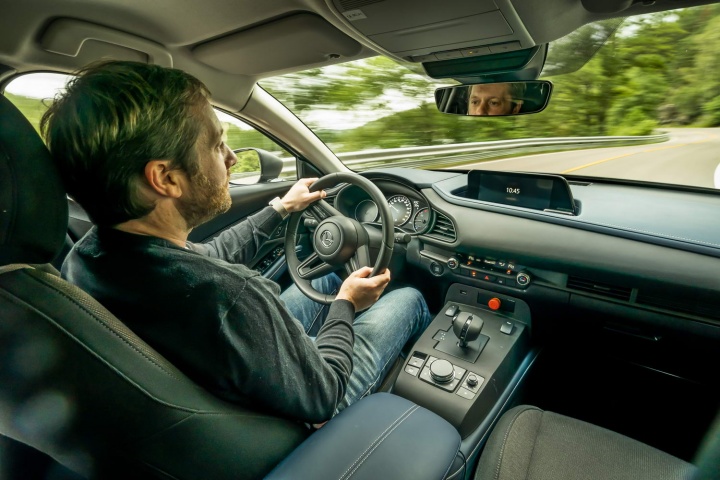 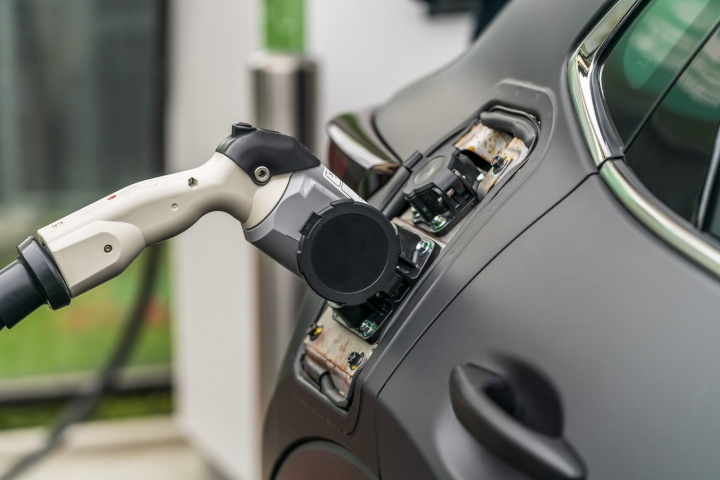 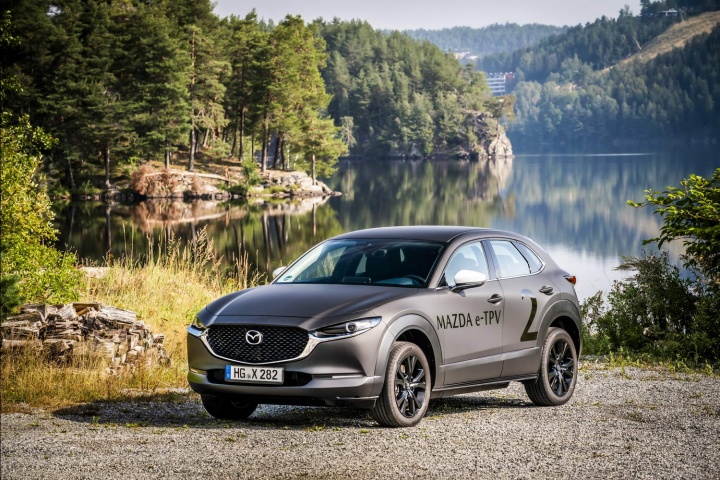 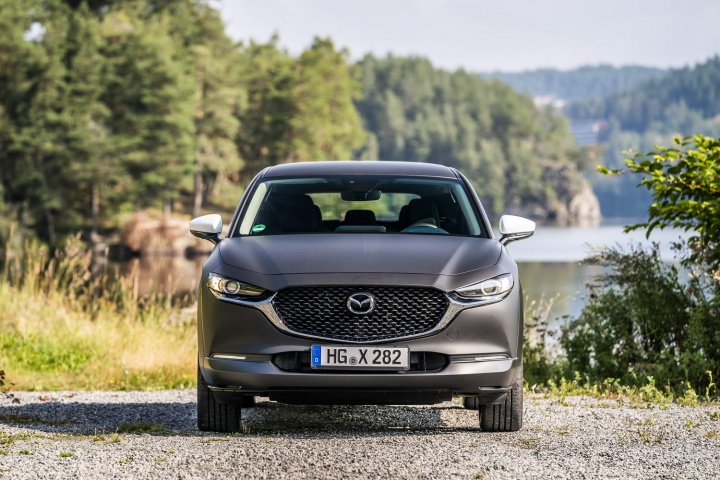 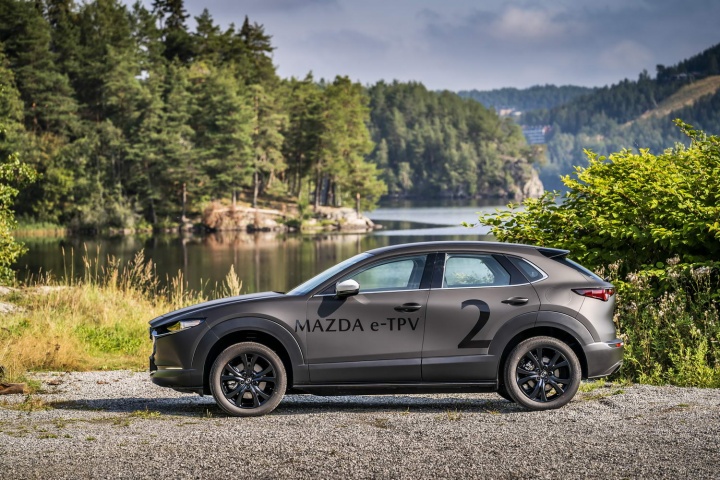 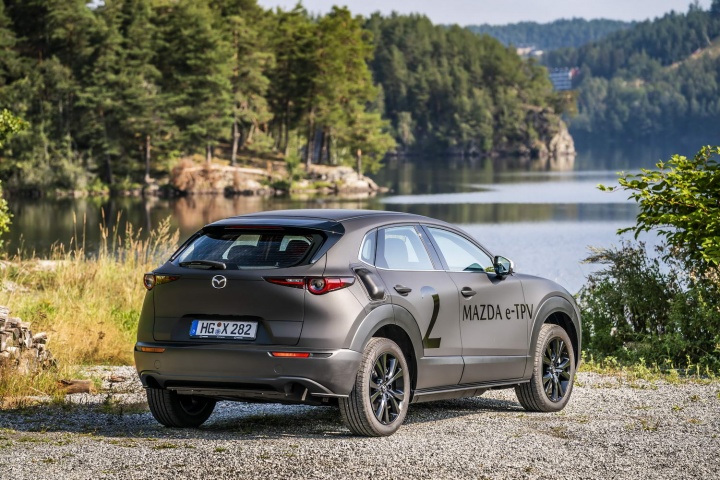 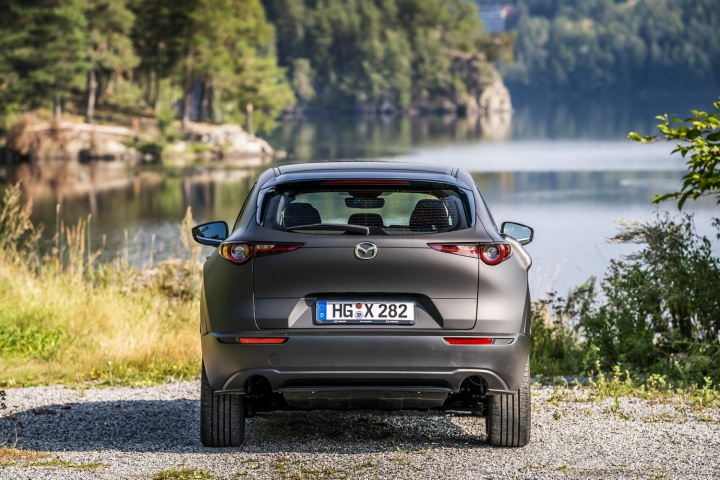 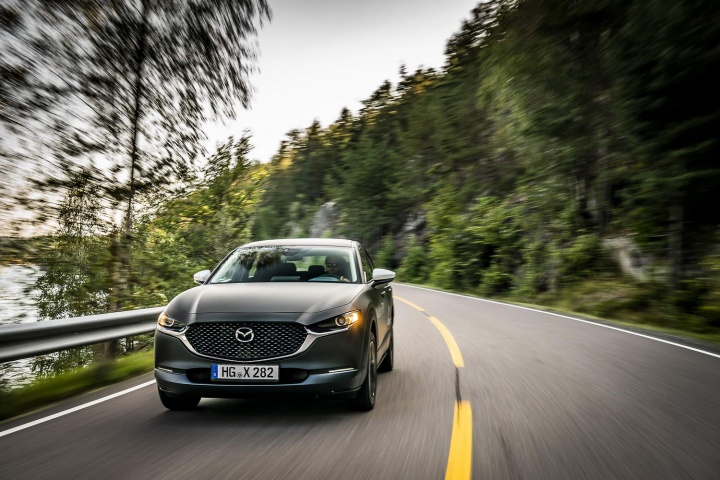 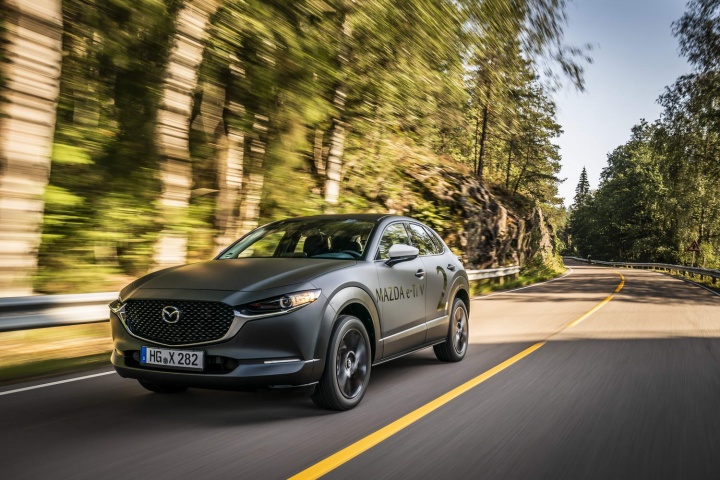 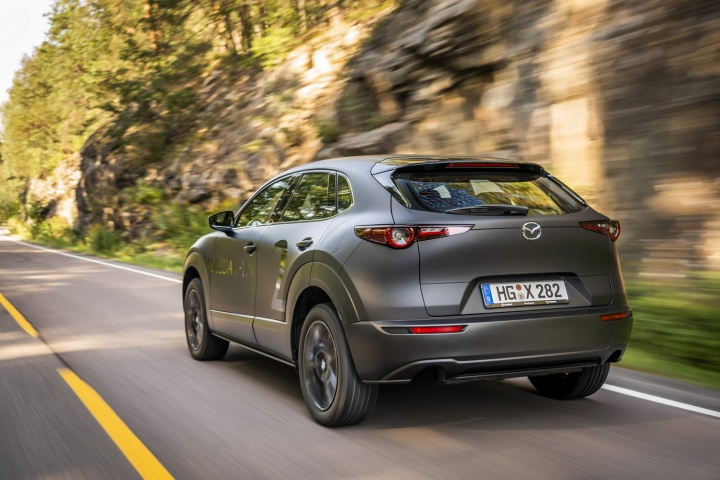 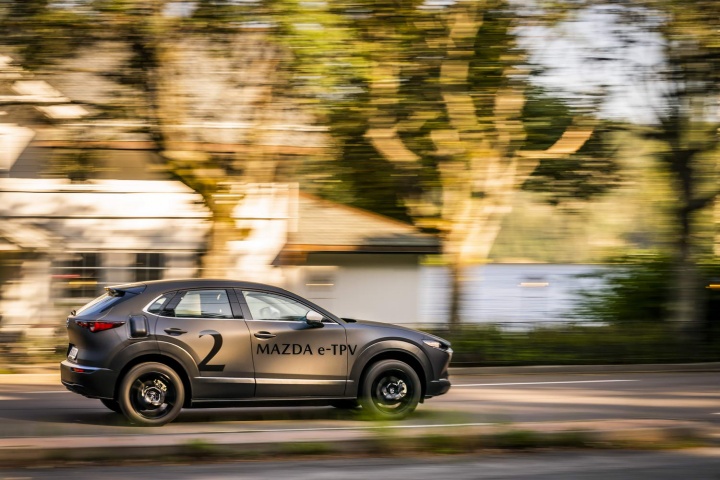 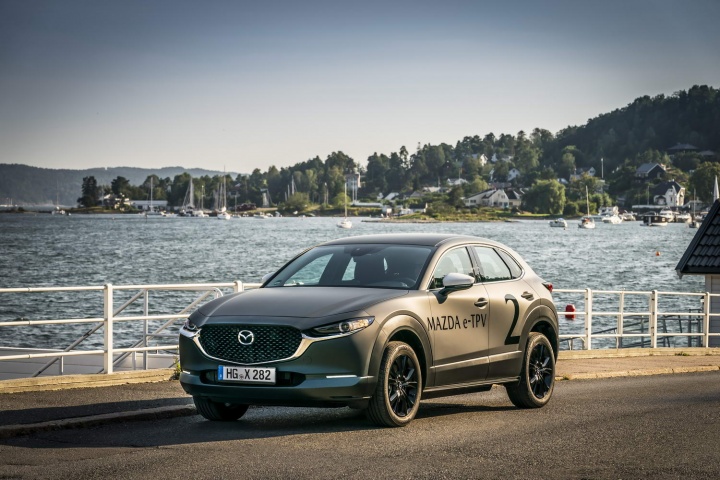 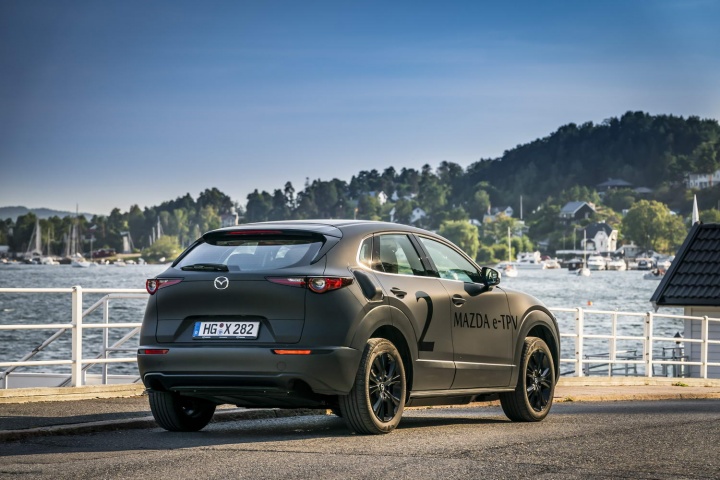 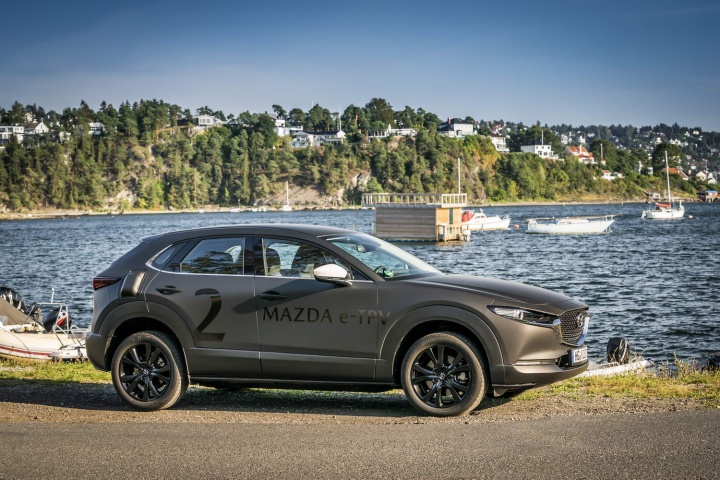 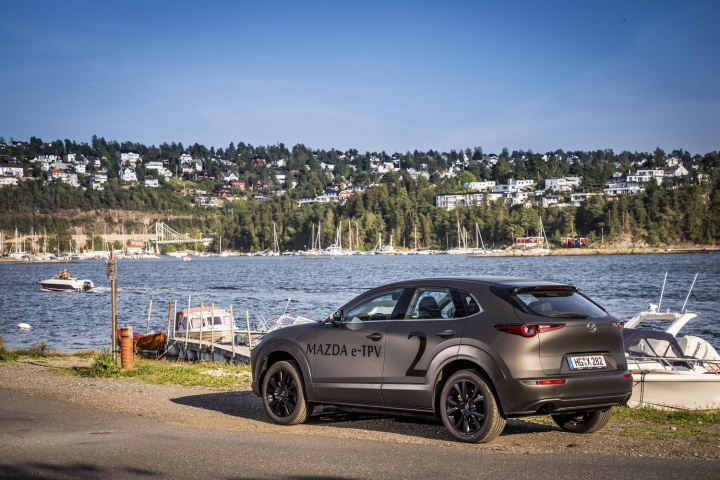 The first Mazda EV will launch in 2020; we've been for a drive in a prototype.

One of the critical factors for a Mazda EV is that it remains fun to drive, according to management at the Japanese company. That means a smaller, lighter battery to aid handling, even if that also results in a smaller driving range. However, there is some logic to Mazda's approach, and it has a trick up its sleeve. We test drove an SUV prototype to get to grips with the philosophy.

This prototype may look like a Mazda CX-30 wearing some moody looking paintwork, but that is purely for functionality and appearance. When Mazda's new electric car makes its debut at the 2019 Tokyo Motor Show later this year, it will reveal the real design - one that will be a crossover of sorts. Don't read too much into the 'e-TPV' name, either, as it is merely an internal designation that stands for electric Technology Prove-out Vehicle. However, we do know that Mazda will take a different approach to the powertrain side of things. By opting to use a smaller capacity battery than has become the norm, Mazda claims that its battery will be more environmentally sound than the higher capacity units other premium manufacturers are using.

Accommodating that battery will be a new type of vehicle platform offering a good deal of versatility, not only for different vehicles to share some of the same underpinnings, but also to harness different power sources. Everything is currently on the table, including pure internal combustion engines, mild hybrids, plug-in hybrids and even a range extender. Radically, Mazda will make a new rotary engine to power its range-extender EV.

As this is a development prototype, there are several features of the car that are not yet finalised. In this review, we're focusing mainly on the electric powertrain performance and its handling characteristics. Even though it's carrying a CX-30 body, we're told that the suspension and driving dynamics of the car are close to what we can expect from the production model. It sticks with passive suspension and will use a bespoke version of Mazda's G-Vectoring system that delivers a more consistent and natural feel when cornering. Like in its internal combustion-engined cars that employ a similar system, the Mazda EV will use some torque from the motor to shift longitudinal load rearwards as the steering is opened when exiting a corner. It's all very subtle in how it operates. What drivers are more likely to notice is how compliant the ride is. There is some body lean through the bends, but for the most part, it feels well-judged and more like a traditional car than a heavy EV that has a low centre of gravity but lacks involvement.

The powertrain comprises of a 35.5kWh lithium-ion battery that will power a 140hp electric motor driving the front wheels through a single-speed automatic transmission. A 6.6kW onboard charger will accommodate domestic and public charging needs. These prototype vehicles were fitted with CHAdeMO charging ports, and Mazda has confirmed that European models will feature the CCS type connection, capable of rapid charging at 50kW. A fully charged battery will be capable of providing a driving range of about 200 kilometres, though the exact range is still in the process of being finalised.

With that rotary range extender, the driving range will surpass 400 kilometres. Like the system that the BMW i3 had, the small capacity petrol engine acts as a generator to help recharge the battery, or in this case, to provide propulsion directly to the electric motor. Mazda is developing this rotary range extender system to be theoretically compatible with vehicles powered by CNG, LPG and hydrogen. For now, we're just driving the pure electric version, but a look under the bonnet is revealing as the compact electric motor only occupies the left side of the engine bay, leaving a good deal of free space that could be taken up by the rotary unit.

Perhaps the single greatest benefit of using a smaller battery pack is that the overall weight of the car comes down. The engineers that accompanied us on the drive weren't ready to confirm the exact weight of the vehicle, but our estimation of 1,600kg brought nods of approval. With 235Nm of torque, it doesn't lack in performance, and you don't get the sudden jolt of acceleration off the line that some of the more potent EVs can offer. Its performance would be comparable to a good 1.6-litre turbocharged diesel engine.

Only a small amount of regenerative braking was available during our drive. The engineering team is still considering the different options for this aspect of the car including the fitment of steering wheel paddles to allow drivers to adjust the rates of regen and to select a potential 'sail' or freewheeling mode. Having a one-pedal driving mode like in the Nissan Leaf is a possibility, though it may not arrive in time for the car's introduction.

It's far too soon to comment on pricing as the finished vehicle has yet to debut. Mazda does aspire to move further into the premium market, something that senior management says will be reflected in the car. Buyers expecting a cheap-to-buy EV on account of its smaller battery may be in for a surprise.

With driving range seeming to be such a key factor for buyers of electric vehicles Mazda will face some strong headwinds with its strategy, even if it makes sense to the type of driver that doesn't need to cover long distances and has somewhere to charge the car at home or work. Mazda's company executives think that as much as 95 per cent of its customers cover as little as a quarter of the battery driving range it will offer each day. Thankfully, range isn't the only thing the Mazda EV promises to have going for it. 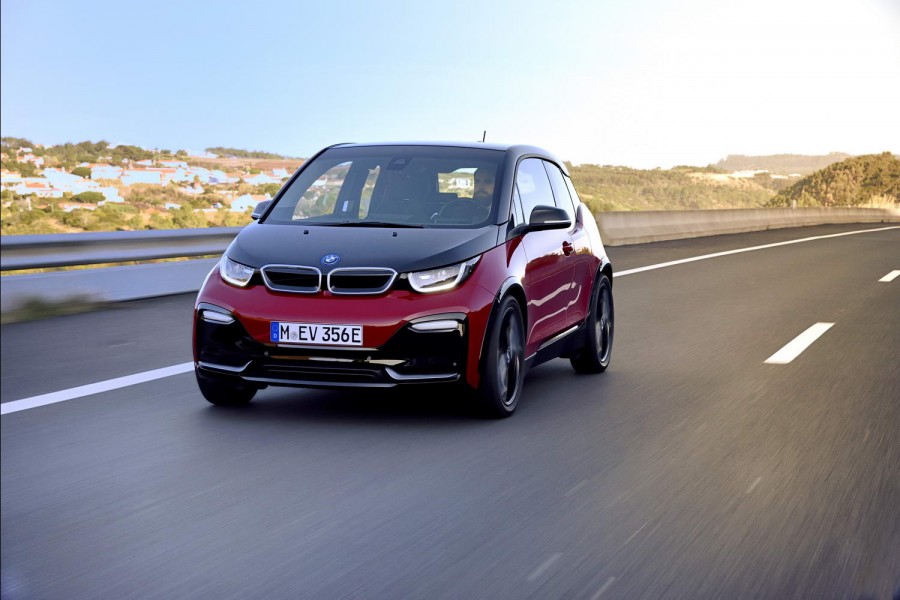 BMW i3s review
BMW i3s vs. Mazda electric SUV (2020 prototype): limited in the practical sense, but the i3s remains one of the best-handling EVs on the market, and it finally has the range to match that. 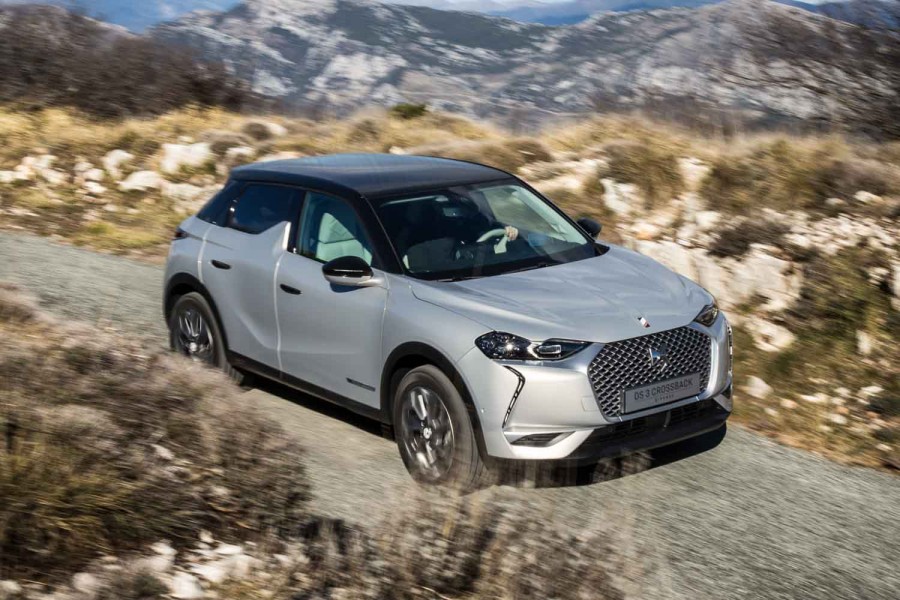 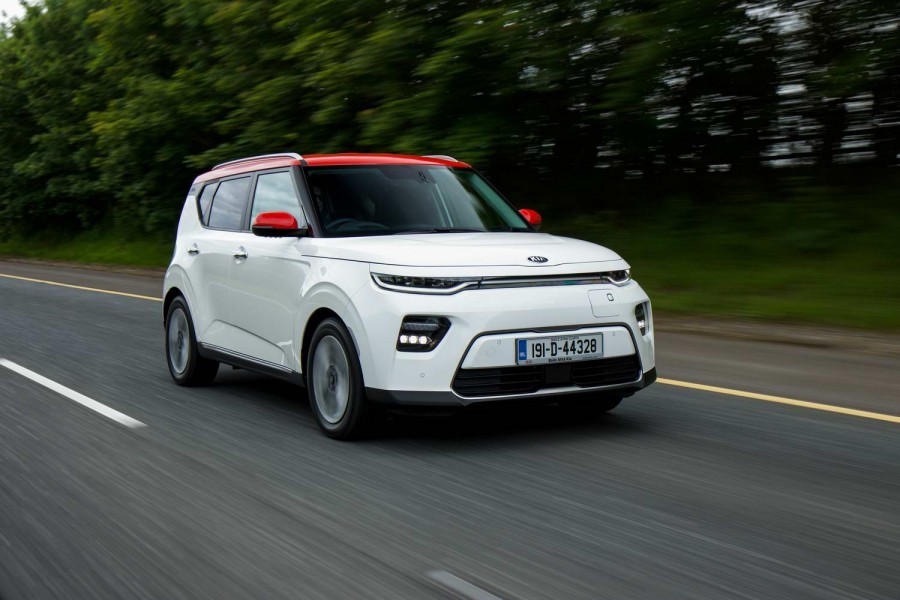 Kia e-Soul (2019) review
Kia e-Soul vs. Mazda electric SUV (2020 prototype): a polarising design, but if you're looking for a car that has plenty of space and one of the best driving ranges in the segment, look no further.