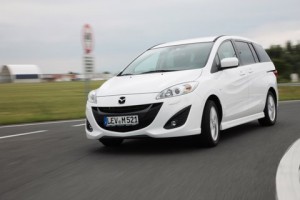 Will Mazda gain more fans with its new Mazda5? The new MPV arrives in January: CompleteCar.ie has had a sneak preview.

The Mazda5 has been a reasonable success in Ireland, and quite a bit more successful in mainland Europe. In Ireland it sells about one-third less than the Ford C-Max, probably its main competitor, but price and its engine range has held it back up until now.

A new model in coming to Ireland in January and we've been granted an early look - and drive - of the car in its pre-production form.

It is pretty clear straight away that Mazda has adopted the new family face for the Mazda5 and it now looks very much like the designers have transplanted the face of the Mazda3 onto the large MPV. The existing Mazda5 is a handsome car so there probably wasn't that much need to tweak things too heavily.

We learned at the presentation from Koji Tabata, the chief designer of the car, that he wanted to incorporate more "seductive smartness" to the car's design and have adopted the "Nagare" flow design (based on running water) into the new model. You can see it as a deep, sculpted line that flows from the front light to the rear quarter panel. The adoption of the familiar family face makes the Mazda5 look more compact front-on, and that line breaks up the side a little too. The car has the same dimensions as before, which are rather generous.

Inside there have been revisions to the cabin. The dash is laid out with visual elements higher up and the audio system has been revamped. Users can also now specify a built-in TomTom navigation system. An MPV like this lives and dies by its practicality though and thanks to sliding doors, access is really easy, especially in tight parking spots. They protrude just 159mm when open.

There is room for seven in the Mazda5. The second row offers three seats, or two if you want to enjoy more elbow room. The centre seat can be turned into a large arm rest, a storage tray or else it can be stowed away to allow a walk through corridor to the rear seats. The second and third row of seats can fold flat to provide 1,485 litres of luggage space. There are a total of 45 storage compartments in the car.

This is very early in the launch cycle of the new Mazda5, so things like specification are still up in the air. There is a raft of equipment available this time around including a 4GB navigation system with hands-free Bluetooth, optional Bluetooth audio and telephone systems, privacy glass, cruise control and xenon headlamps. These may be added as standard depending on the market and specification. Pricing has yet to be announced and we will be awaiting the announcement of a new diesel engine, which is likely to be a 1.6-litre unit.

We tried the new Mazda5 in pre-production 2.0-litre petrol guise. This version has 150hp and 191Nm of torque and boasts a 13 percent reduction in fuel consumption compared to the outgoing 2.0-litre petrol model - and a 15 percent reduction in emissions, which are now down to 159g/km. This model now has i-stop Stop/Start functionality and there is also a gear shift indicator to advise you to change gear in a way that will improve economy.

What Mazda seemed to be most proud of is the improvements to the car's handling, which to be fair was always pretty good. "Linear" was a word that cropped up a lot during the car's presentation. Mazda wanted the car to have more linear steering, and for the car to settle better between braking and cornering. The engineers apparently modelled this on some of the best performance cars and have added new rubber couplings to the steering shaft, increased the suspension spring rates to make the car roll more gently and added new, more rigid stabiliser mounts.

It felt good on our short drive, with little perceivable body roll. There appears to be a pretty decent balance between comfort and stability. Visibility is good all-round and the gear-shift is good too. Our drive was way too short for a proper assessment of the car though.

The 2.0-litre petrol engine is quiet and smooth, but ultimately irrelevant for our market anyway. There is also a revised 1.8-litre petrol model, which boasts emissions reduced by six percent to 168g/km, but Mazda Ireland is predicting an almost total shift to diesel when this is eventually offered. Rumour has it that there will be a 1.6-litre diesel and this could be used alongside the 2.2-litre diesel out of the Mazda6. This has yet to be confirmed.

The new model will go on sale in Ireland in January 2011 and is expected to be offered at a lower price than the existing car thanks to lower emissions in the diesel models.

This isn't a revolutionary change to the Mazda5 and the engines that we have tried so far are largely irrelevant to the Irish market, but if Mazda does offer a new, cleaner diesel that serves also to reduce the price of the Mazda5 then this could be a good seller in 2011. The improvements to the seats are clever, but Ford will also be coming to market with a new C-Max, which will be the model to beat. We await the diesel engines (and a longer test route) before we will pass final judgement.