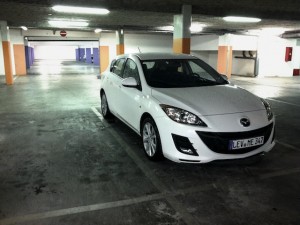 Don't look too hard for differences in this latest Mazda3. All the changes are under the bonnet.

The Mazda3 has been a reasonable seller in Ireland, but has yet to really threaten the dominance of the Volkswagen Golf, Ford Focus or Toyota Corolla.

The latest version of the Mazda3 is still a new car, so there are no new visual changes to describe here. What is different happens under the bonnet and in the cabin.

There is a new 1.6-litre diesel engine that uses a variable geometry turbocharger and a new injection system, while there is a move away from using a double overhead camshaft to a single item, saving 4kg and reducing friction and vibration.

The diesel particulate filter is now maintenance-free and the car is now Euro 5 compliant.

The main difference in the cabin is the addition of an extra gear. The 1.6D now has a six-speed rather than a five-speed gearbox and this makes the car much better for cruising on motorways.

This new engine is a little vocal, but the performance isn't bad. The 0-100km/h sprint takes 11 seconds and the top speed is 186km/h. It doesn't ever feel particularly urgent and you can feel that the gearing is very much in the direction of economy.

The Mazda3 has a willing chassis and you can push it on through twisty roads. Our test cars were Sport models with large alloys, which made the ride a little on the firm side, but it never feels too uncomfortable.

Ireland's best-selling grade is the Executive Specification and this gets some additional equipment thrown in as standard. You get DSC stability control, traction control, air conditioning, 15-inch alloy wheels, auxillary input for mp3 players, electric windows, steering wheel audio controls, leather steering wheel and gear knob and now you get Bluetooth and cruise control on all models apart from the entry-grade Comfort.

The new car arrives in dealerships in time for January 1 delivery in 2011. Mazda sells around 1,000 units of the Mazda3 per year.

The new 1.6-litre Mazda3 diesel is refined, good value and hugely competent. This new version isn't a massive change but it is cleaner, more frugal and the addition of the extra gear makes it more refined on longer trips.