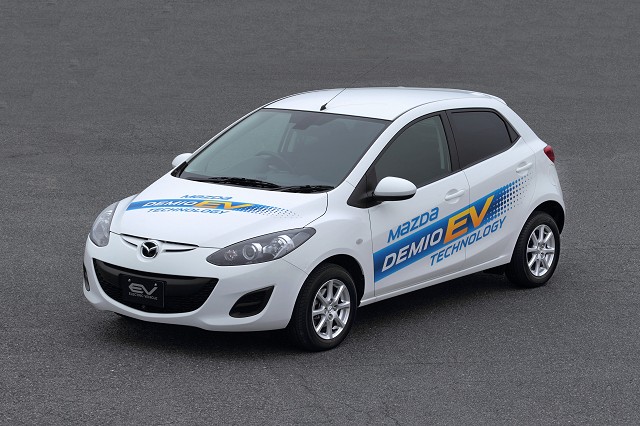 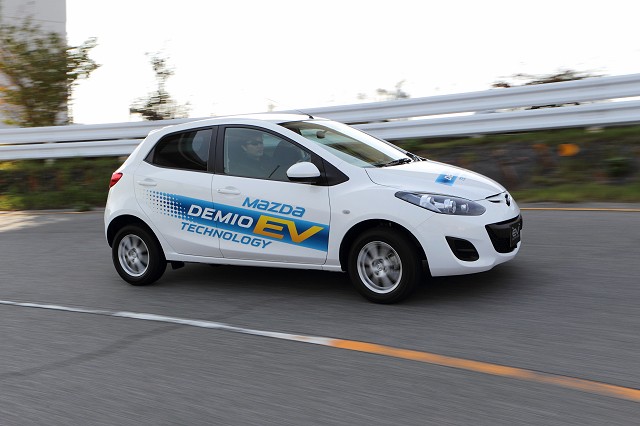 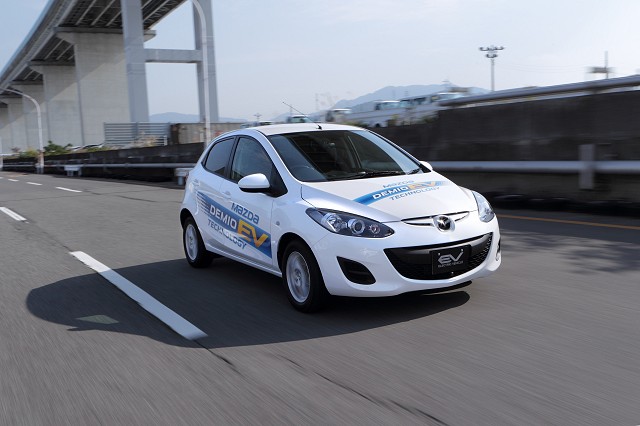 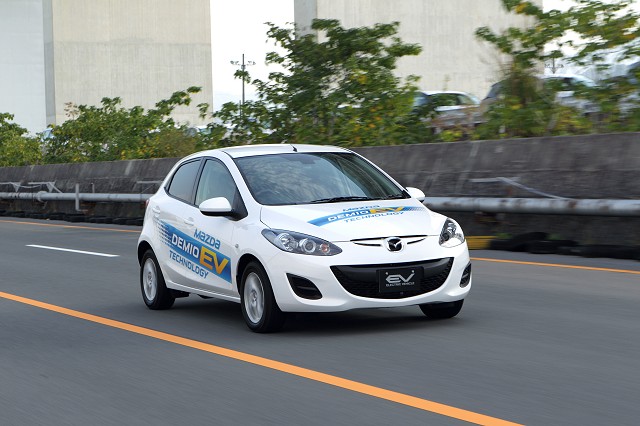 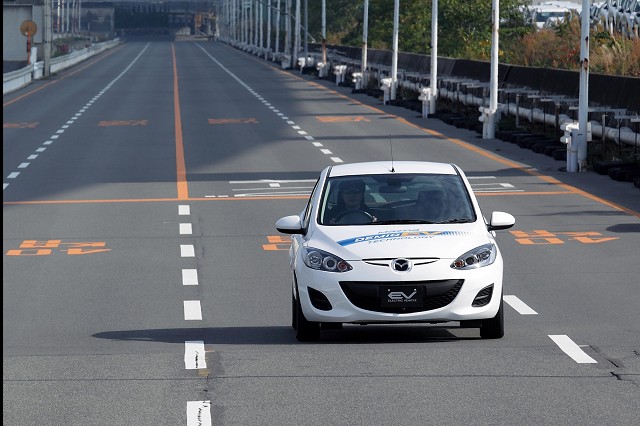 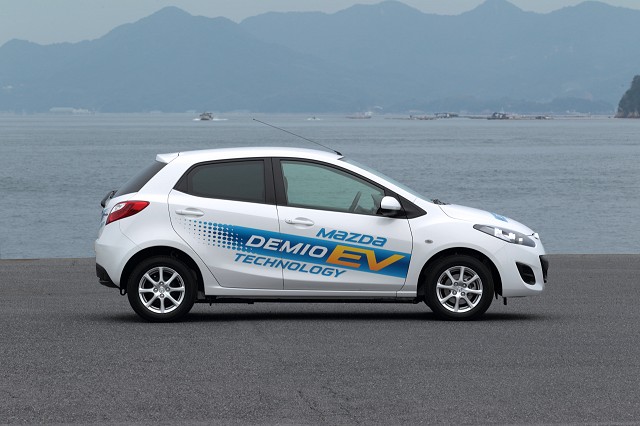 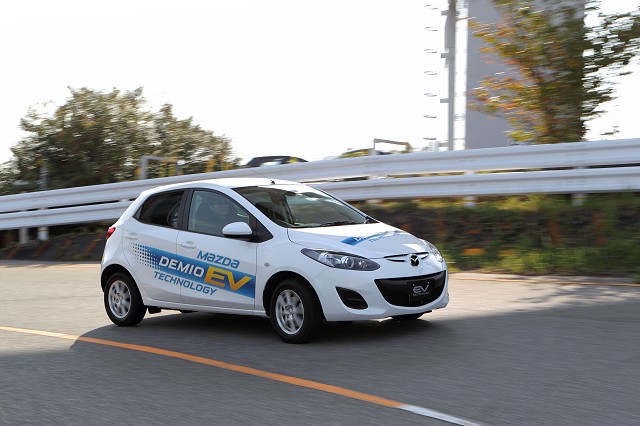 We drive Mazda's first ever electric car, the Mazda2 EV.

Mazda may be concentrating most of its efforts on refining the internal combustion engine, but it has also come up with a superb electric version of its supermini in the Mazda2 EV. Just a shame it's only available in Japan.

To all outward appearances, the Mazda2 EV is the same as any other model from this particular supermini line-up. Good looking and with five-door practicality, the EV is every bit as appealing and practical as a petrol- or diesel fuelled Mazda2. The connection for the plug-in charger is placed inside the fuel filler flap, so there are no ungainly extra holes in the EV's flanks.

Inside, it's the same story, with the EV looking much like an automatic gearbox-equipped Mazda2. The gear lever has the same selection of Park, Reverse, Neutral and Drive, so the driver simply selects what's needed and off you go. Adapting the 2 to accommodate the batteries under the floor and between the rear axles has not compromised passenger space and the boot remains the same as the standard car's.

Two things strike you immediately when driving the Mazda2 EV. First off is the performance. Mazda isn't quoting any precise figures, but it felt quite nippy to our experienced seat of the pants. Electric vehicle project leader Mitsuri Fujinaka told us the aim was to match the performance of the 1.5-litre petrol version of the Mazda2, which achieves 0-100km/h in 10.7 seconds. The EV feels even brisker and was soon humming along at 120km/h on Mazda's test track in Hiroshima. It was more than happy to maintain this as a cruising speed, with sufficient oomph in reserve to take it up to around 150km/h flat out. The only problem with this is the faster you go, the quicker the battery drains.

Our second immediate impression was the absence of noise. It's true that all pure electric vehicles are very quiet by dint of not having an internal combustion engine churning away up front, but the Mazda2 EV seemed even more refined than most we've tried. The electric motor can be heard as a distant turbine-like whirr, but it's not intrusive or annoying. Wind and road noise are more noticeable in the EV than in the standard Mazda2 as they are not drowned out by engine noise. However, the standard Mazda2's relatively narrow tyres used on the EV help cut road noise, while wind noise is well enough contained at motorway speeds for the EV to be considered a realistic long distance machine.

The electric motor and battery pack add around 100kg to the overall weight of the EV compared to a standard Mazda2, but the engine's instant and hefty punch of around 200Nm overcomes this. At any speed, the EV accelerates keenly and cleanly, with a throttle pedal that allows for easy and fine modulation. The extra weight calls for firmer springs and shock absorbers but, if anything, the EV rides bumps more ably than the petrol models. It also turns into corners with verve and holds its line without wavering, much like a normal Mazda2.

Ah, well you won't get anything here in the Ireland because the Mazda2 EV is limited to 100 cars for trials in Japan. These cars are being loaned to government agencies and selected businesses to help Mazda gather data on the use and effectiveness of electric vehicles. The cars will all be equipped to the same level as a standard Mazda2, so their users will enjoy a CD stereo, electric windows and air conditioning.

Although the Mazda2 EV will not be sold in Ireland, it is leading the way for Mazda's future electric vehicles that are likely to go on sale in 2018. Mazda has also said it's looking at hybrids with help from Toyota and also using electric motors to produce all-wheel drive systems.

The Mazda2 EV offers a range of 200 kilometres on a full charge, which the company's engineers say is a very realistic and achievable mileage rather than the more limited ranges of some other battery-powered cars. A quick charge can be completed in half an hour to top the battery up to 80% of its full potential. To get a complete 100% charge will take eight hours.

Mazda may currently be throwing most of its efforts at refining the internal combustion engine with its Skyactiv programme, but the Mazda2 EV shows it can also turn out a brilliant electric car. The EV has a decent range, the same practicality as any other Mazda2 and, perhaps most important of all, it's fun to drive. This last point is vital as it makes the Mazda2 EV appealing as a car and not just as an environmental statement.