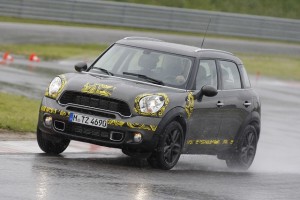 CompleteCar.ie gets behind the wheel of MINI's new SUV, the Countryman.

MINI isn't daft. You know that: you've seen the adverts. MINI knows that a fair few folk will see an SUV crossover as the final act in the BMW burial of everything MINI once stood for. It knows it, and is willing to talk about it. But we don't buy that argument though; the MINI Countryman is a Range Rover for the climate change era.

At just over four metres long, the Countryman is shorter than a VW Golf, and if it wasn't a MINI you'd think it looked quite dainty. However, because it is a MINI, and shares a lot of the hallmarks of the hatch, it has a chunky, steroidal look. MINI did this on purpose, eschewing soft, circular shapes in favour of something more 'masculine'. It's never a butch car, but it's definitely a neat piece of design work that looks detailed without being overly camp.

Make of the styling what you will, but there's no doubt that MINI has put plenty of thought into the packaging: the Countryman uses its space very efficiently. The cabin has an abundance of head- and leg space, and will comfortably seat four six-foot adults. Individual rear chairs will be an option, leaving space for the quirky MINI Centre Rail accessory mount. The rear seats slide and fold, which means the boot can offer anything between 220- and 1,170 litres of space.

Cabin design and quality are a tangible step forward from the hatch too, with a busier layout but one that puts the car a class higher. It's familiar though, retaining the MINI quirk and appeal. It will form the basis of the next-generation MINI hatch, too.

The full breadth of MINI hatchback engines will be available, starting with the front-wheel drive petrol One, rising through Cooper and a pair of brand new One and Cooper D diesel engines, and capped off by the Cooper S. Prices start at €23,800 for a Countryman One.

Time in the prototype Cooper S All4 we drove was restricted to a wet track, though we'd already say that the balance the Countryman strikes between bump-smothering comfort and rigid body control is exemplary. The steering is a little slacker than that in smaller brethren, but woolly it is not.

The All4 system has all the engine's output going to the front wheels under normal driving conditions, but will send up to half of it rearward during aggressive acceleration. It is capable of sending everything to the back if really needed, though. During another winter snowstorm it will prove useful, but we'd suggest it isn't imperative for day-to-day driving fun - that comes as standard.

What's important is that the Countryman rides better than the regular hatchback MINI. It drives with more suppleness, and it does so while still being a hoot around corners. In Cooper S form, the sharp throttle response and brisk acceleration (0-100km/h in 7.4 seconds) makes it feel like a proper hot hatch, for all its practicality.

The diesel engine powering the One D and Cooper D is a brand new unit, soon to be found across the MINI range. It was designed completely in-house by BMW (previous MINI diesel engines have been tie-ups with other makers) and is based on the four-cylinder engine found in the BMW 320d.

Predictably, it boasts decent economy and emissions. In the front-wheel drive One D, with a 90hp output, it emits just 113g/km and uses 4.3 litres/100km on the combined cycle. The 112hp Cooper D produces just 3g/km more, and the All4 version is 121g/km - the lowest emitting 4x4 on sale apparently. What's more, BMW told us it is working on homologating that to 120g/km or below before the car's September Irish on-sale date, so it'll sneak into band A for tax.

We'll have to reserve a proper dynamic appraisal for a later date, but our early drive bodes well. Even on watery tarmac, the Countryman's responsiveness to both throttle and steering inputs and its ability to cling on through corners make it a blast. That it is comfortable at the same time is impressive.

More important for most, though, will be the combination of space and funky appeal it provides: finally, a MINI that people with kids can buy. We're already convinced.