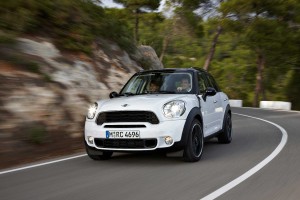 MINI has just entered the crossover market with its new Countryman. But is it really a MINI?

When is a MINI no longer a MINI? When you stretch it to four metres in length and put it up against cars like the Nissan Qashqai and even the Volkswagen Golf, some purists would argue. However, the MINI has never been only one car - variations on the theme include the original Clubman, the Countryman and even the Mini Moke - so today's guardians of the MINI legacy (BMW) can hardly be accused of taking liberties with the original concept.

It is, nevertheless, a strange experience to drive a car that looks a lot bigger than the standard model, has quite a different personality, yet manages to retain that rather unique MINI driving feel. That makes you wonder how those who would not normally consider a MINI might react to it. MINI is hoping for a lot of conquest sales. It is also hoping the Countryman will encourage existing MINI customers who might be broody, or already have children, to remain loyal to the brand by offering more space and practicality.

The model on sale in Ireland will be a five-seater, with a rear bench arrangement. However, you can specify the four-seater layout, which suits the car's profile very well.

Inside, the Countryman has all the classic touches of the existing MINI design, although the large centre dial (a defining feature of its layout) is still off-putting for some because crucial information such as speed is out of the line of sight and requires lateral concentration. There must be some compromise available to the designers here, although it is difficult to see how to remedy the problem without altering the essential character of the design. Perhaps a double-dial arrangement?

The car has a bigger boot than you might imagine and it is possible to move the rear seats forward and back and then split them to accommodate extra loads. Up front you are still getting the MINI experience while the rear becomes a more practical proposition.

The Cooper D and the Cooper S will have a four-wheel drive option at €2,150 and €3,410 extra respectively. This system is not going to allow you to pretend you are driving a Land Rover but it will give a good account of itself in the odd snow flurry.

Only the Cooper S version was available to drive at launch time and it really shows the car at its best with excellent acceleration, grip and driver feedback. The basic diesel is a more sedate affair, although BMW does lead the way in diesel refinement. I don't think MINI fans are going to be disappointed because the driving experience has been refined rather than compromised. Given that it is a crossover, the Countryman has a lot more appeal than the Nissan Qashqai and is a great deal more fun to drive.

The Countryman goes on sale in September. Standard equipment levels are excellent and really put it up to the competition. Roof rails; air conditioning; rear park control; dynamic stability control; six airbags; ISOFIX child seat mountings; Bluetooth connection; digital radio (not really a boon for the Irish market because of network limitations) and tyre puncture warning system are all standard.