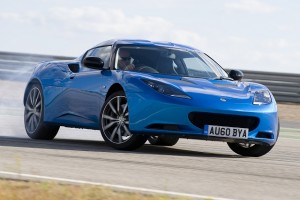 The Lotus Evora S gains 70hp thanks to a supercharger and now operates on a completely new level. It's not just a Porsche Cayman killer; it'll keep all but the fastest 911s very honest - and on the right roads leave them for dead.

Aside from some subtle S badging on the rump, titanium tailpipes and a rear diffuser there's little to tell you that this Evora features a supercharged version of the standard car's 3.5-litre V6 engine. Look through the glass hatchback, or lift the boot door, and you can see the blower sitting on top of the V6, too.

It's an unusual looking car, the Evora, its shape jarring at first. The fussiness of the rear and its unusual proportions take a while to get used to. It works, but pick your colour carefully as the car's details work best in metallic finishes. Inside it's better than any Lotus before it, and the build quality has improved further with this S model. It's still not very easy to get into, has a tight footwell with no footrest and the +2 seating in the rear (if you choose it) is absolutely hopeless.

A sum of about €106,000 should land you a new Lotus Evora S in Ireland. The supercharger boosts output to 350hp, while torque rises to 400Nm. In addition to the extra grunt, the S gains Lotus' Sport Pack, which includes a switchable Sports mode with sharper throttle response, an increased rev limit, sports diffuser, titanium tailpipe, an engine oil cooler, cross-drilled brake discs and black-painted brake callipers. You pay extra for a pair of rear seats, but we'd advise you not to bother.

The Evora S is nothing short of remarkable on challenging, undulating, poorly surfaced country roads. Nothing with its performance comes close to matching its other-worldly poise on tarmac that would have its competition's suspension running out of answers very quickly. This composure is sensational enough and it improves more as the speed rises. The suspension has an almost unreal ability to massage away crests, dips, ripples, cracks and holes - all while retaining complete control. There's virtually no body roll in the bends, and the steering communicates to the driver exactly what the front tyres are doing. Response from the wheel is instant and the information flow is rich and clear in your hands.

To that supreme information flow and utterly faithful response is an engine that gives the Evora the performance it should have always had. The benchmark 0-100km/h sprint takes 4.8 seconds, but it's not about the raw pace it delivers, more the exceptional means by which the Evora S can utilise it. The engine's flexibility is useful: third gear is your friend on winding roads - it digs deep on the exit of bends and has plenty of legs on the straights. That's good, as if there's a weak link in the Evora S's package it's the gear shift. It lacks the precision feel of the rest of the car. The shift is too long in throw, so it's easy to fluff a down-change. Its recalcitrance diverts too much attention away from the overall driving experience, so the engine's spread is welcome.

Work around the manual six-speeder's shortcomings and the Evora S is a truly sensational driving experience. Press the Sport button and the throttle is more eager and the thresholds of the electronics are lifted to allow it to move about underneath you. Doing so requires little real skill, as the Evora S's limits are approachable and friendly: it flatters you behind the wheel with its beautiful balance and easy nature.

The Evora S might be a sensational sports car, but it's adept at the GT role too and should be better suited to Irish roads than most of its predecessors. Its natural gait seems to be a number well above the speed limit, though it's an easy companion around town. Matching that grown-up feel is a list of options that allow you to add some luxury to the S. There's a reversing camera, full leather interior, heated seats and a Tech Pack containing Bluetooth connection, an upgraded stereo with iPod connection, cruise control and a seven-inch touch screen display with satnav.

An intense and rewarding driving experience that leaves its rivals way behind for feel and precision on even the most challenging roads is what defines the new Lotus Evora S. The supercharger's installation is a stroke of genius and the additional performance it brings is welcome, but it's the Evora S' ability to use its power that so impresses. If Lotus could sort out the gear shift then the Evora S would be about as close as it gets to driving nirvana. It's just a pity we don't see more of them on Irish roads.