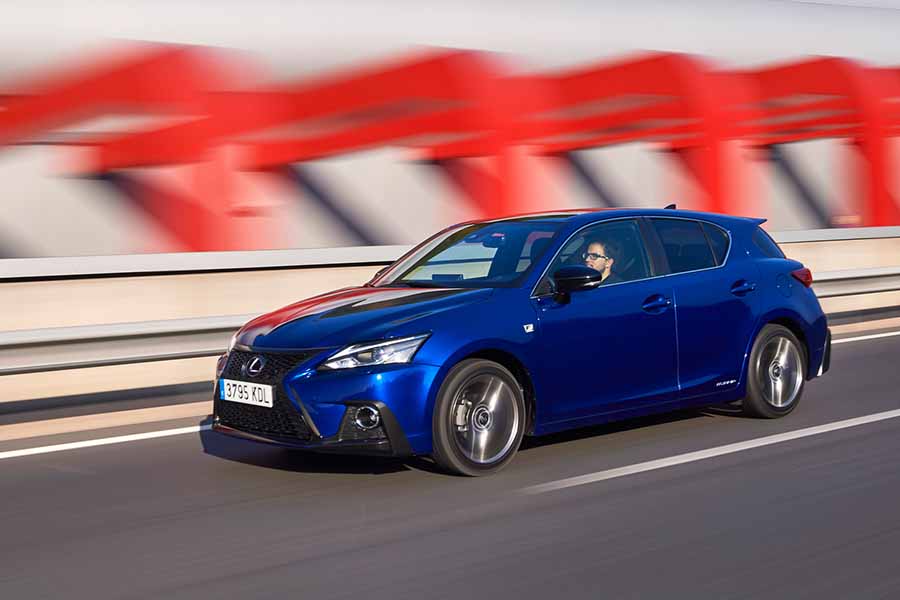 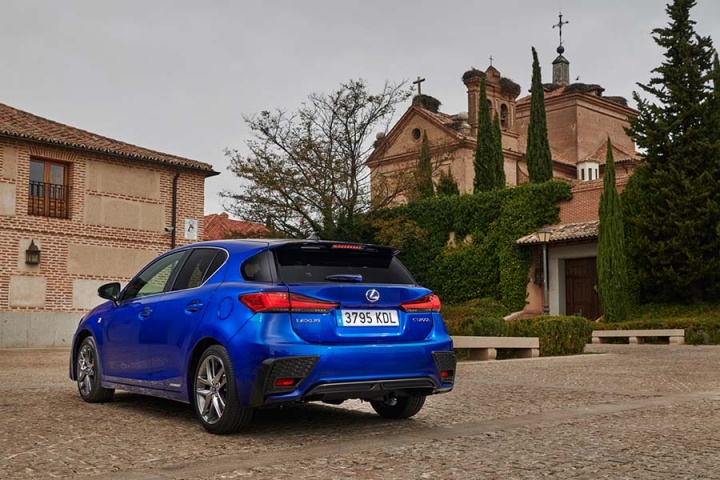 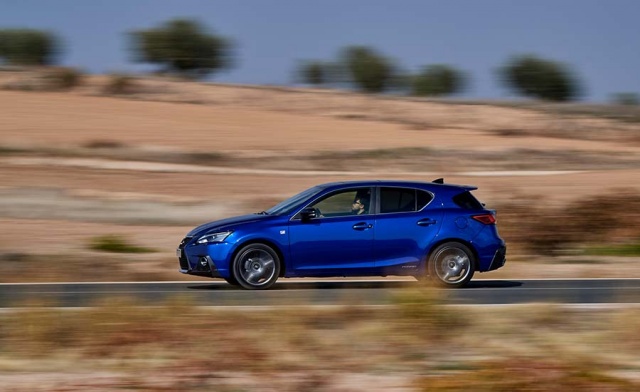 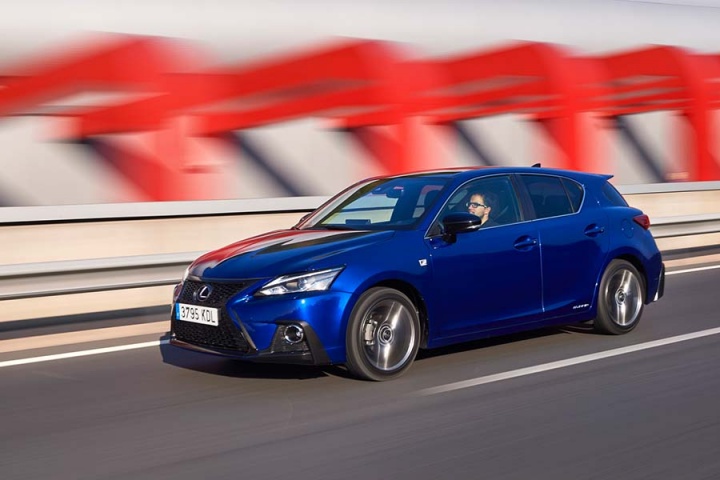 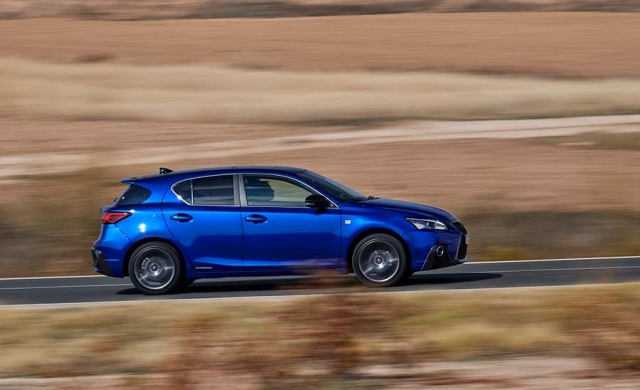 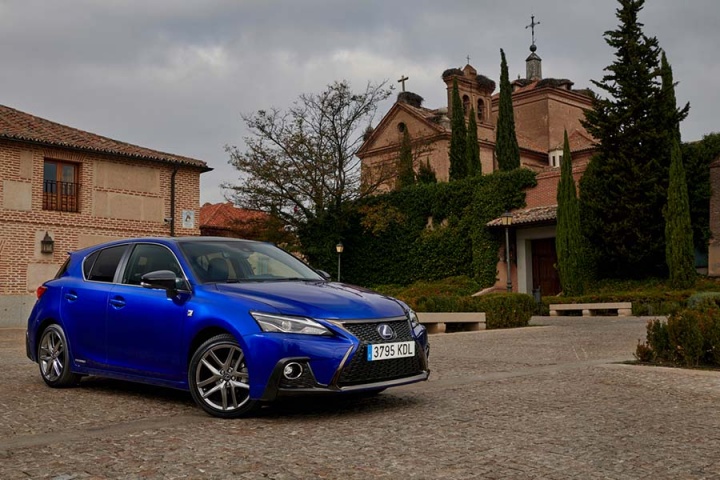 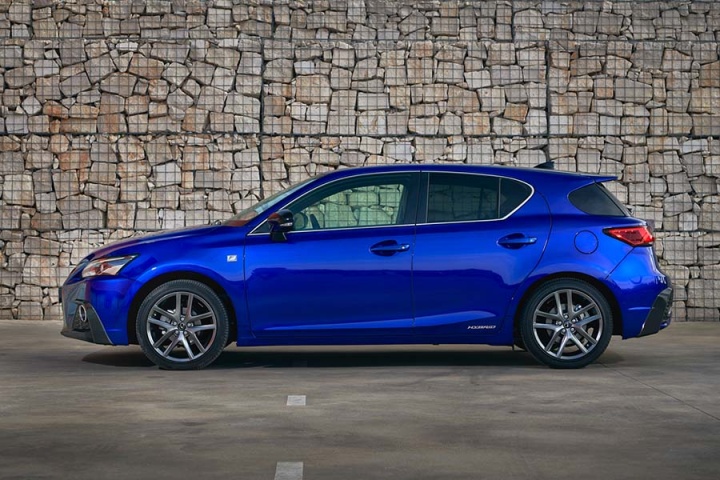 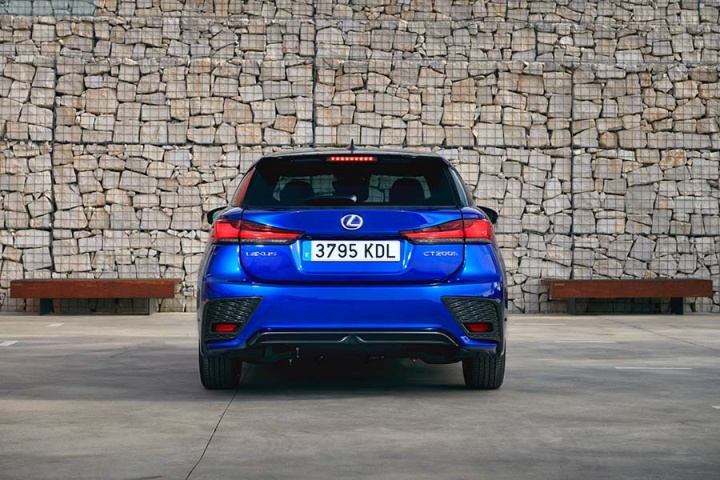 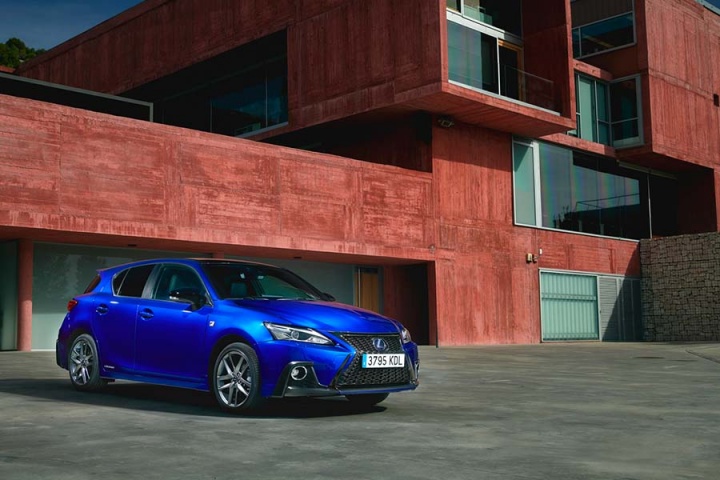 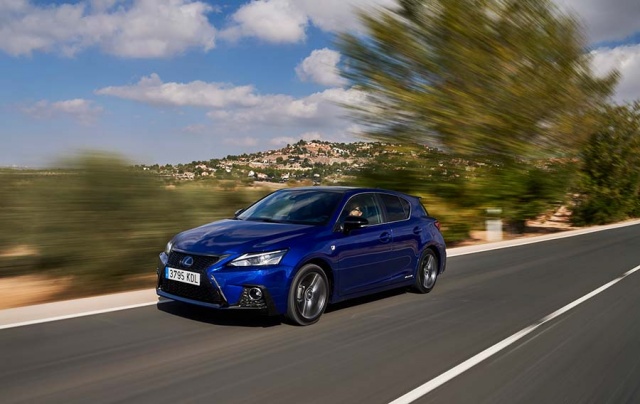 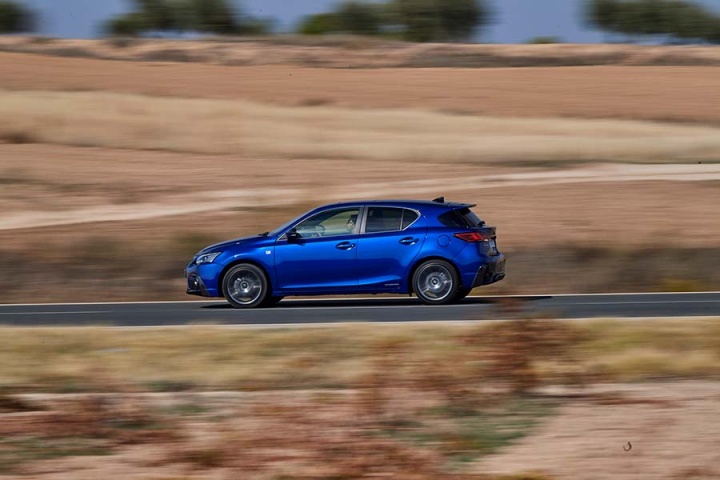 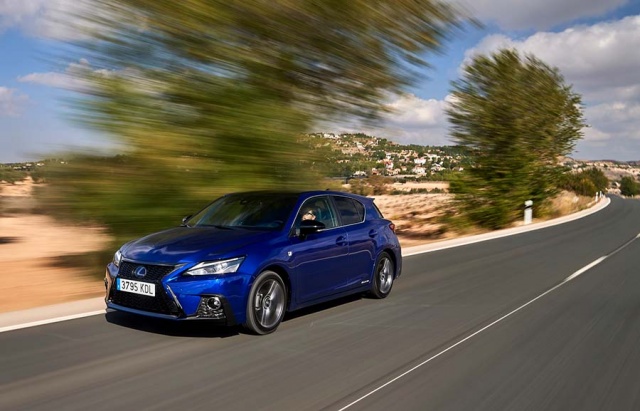 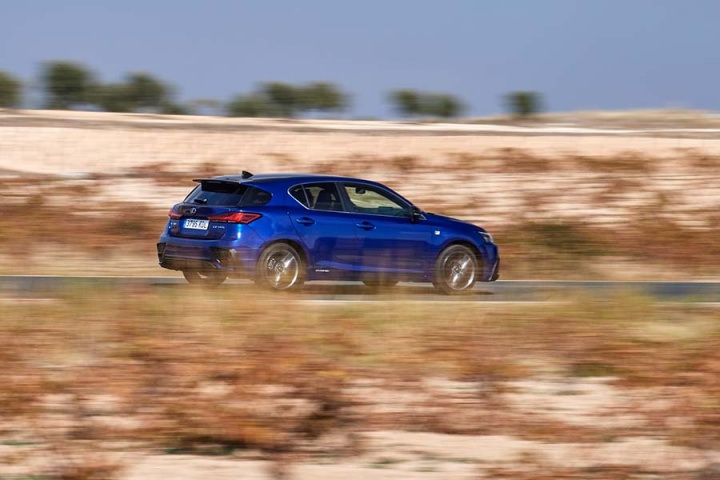 Another round of revisions for Lexus' hybrid hatch, but it remains an outsider in its class.

Lexus' CT premium hatchback goes through its second cycle of changes, following an update in 2014, but in essence it remains the oddball of its segment. The overall package feels a little dated and outmanoeuvred by key Germanic rivals these days, while its 'one engine only' ethos severely limits the choice of potential customers, though new lights and interior finishing are all welcome.

Beauty is in the eye of the beholder, so while we will go on record as saying we don't particularly like the appearance of the Lexus CT, some really do think it looks cool - especially in F Sport guise. The thing is, we reckon the front of the car and the back don't match. The CT's face is all leonine and sleek, and it looks more interesting than its Teutonic opposition. And then you catch sight of the Lexus from the rear three quarters, where it looks dumpy, hefty and strangely SUV-esque, all while managing to make the rear set of the F Sport's 17-inch alloys look tiny. OK, the latest visual updates, which include a new spindle grille, 'arrowhead' daytime running lights, revised bumpers and LED projector headlamps, do improve the CT's formula, but not by enough to have us calling it handsome.

Same goes for the interior, which - like the NX SUV we drove on the same event as this CT - cannot be faulted for the standard of its materials and finishing, but which can perhaps be castigated for its old-fashioned climate control array, or that expanse of smooth, grey plastic surrounding the controls on the lower centre fascia, or the bizarre gear lever that betrays the CT's Toyota Prius heritage, or yet another example of Lexus' failure to come up with any sort of infotainment controller that actually works. This one, a sort of computer mouse button-thingy with a resting 'hump' for your wrist behind it, is another duffer that has the cursor scooting every which way but loose on the snazzy new 10.3-inch multimedia display atop the dash, as you desperately try to get it to land on the menu choice you wish to select. Still, at least the CT has a lovely steering wheel and is reasonably spacious for five adults, although the boot out the back seems a touch too shallow for this class.

Those aforementioned Prius underpinnings rather do for the poor old Lexus CT. The Japanese company isn't alone in offering a premium hatchback like this with only a 'mere' 136hp, but the difference here is that if you want to buy an Audi, BMW or Mercedes with a bit more thump, you can do. For the CT, though, there is just the 200h - featuring a 1.8-litre four-cylinder petrol with electric augmentation to the tune of 60kW, or 82hp. However, although the sum of its parts would add up to a much healthier 181hp, the CT 200h is limited to a peak output of 136hp. And Lexus won't quote maximum combined torque, instead citing the 207Nm maximum twist of the electric motor as the chief figure to focus on.

The problem is, the CT 200h never feels abundantly torquey, like most electric/part-electric cars do, or sparky enough for 0-50km/h urban scooting. It simply feels lacklustre in all situations. The only way you can get the Lexus to feel even remotely quick for acceleration is to mash the throttle to the bulkhead, whereupon the raucous 1.8 makes an awful din... and yet you still don't feel like you're gaining speed with any great haste.

Ah, Lexus would say, but the CT isn't designed for speed. Well, OK, fine, but in truth that means it only really makes sense or drives in a competent manner when it is trickling around in the snarled-up traffic of a big city at rush hour. And why would you go and buy a premium hatchback if that's the only sort of driving you do? The fact is, for all the smoothness of its drivetrain at low speeds, the CT 200h is shown up to be criminally unrefined as soon as you require anything other than glacial acceleration or speeds of more than 50km/h. Which makes it somewhat useless for country roads and motorway driving.

It's a shame, because there's a chassis of some talent under the CT and it has, bizarrely, perhaps one of the finest steering set-ups in this class, the wheel in your hands commanding a front axle that responds instantly and keenly to your inputs, feeding back useful information to you as you go. Indeed, the CT might even be improved by having the larger 2.5-litre engine as used in the NX 300h, which feels usefully punchier and more cultured than the 1.8. But, of course, that would undo the eco-stats that the 200h possesses, which are its chief selling point.

There are plenty of toys and quality cabin materials, plus a useful level of standard safety and guaranteed low running costs, thanks to the CT's ability to supposedly do 68.9mpg (4.1 litres/100km) with just 94g/km of CO2. The addition of Lexus Safety System+ is also most welcome, as that brings in useful driver assist features that should make the CT 200h one of the safest cars in its class.

As noble as Lexus' aim with this car is, we can't help but feel you'd just be far better off with a conventionally-powered rival, because the CT 200h is no great shakes to drive - especially if you live outside a city. The truth is that the Lexus is not a car that is anything like challenging for class honours here. Nonetheless, we'll accept that there are people who like the look of the Lexus CT 200h and who also like the car's saintly green figures, plus of course the marque's unimpeachable reliability record, who will be making a beeline straight for their local dealership to have a look at this unusual, unique-for-its-class hybrid. 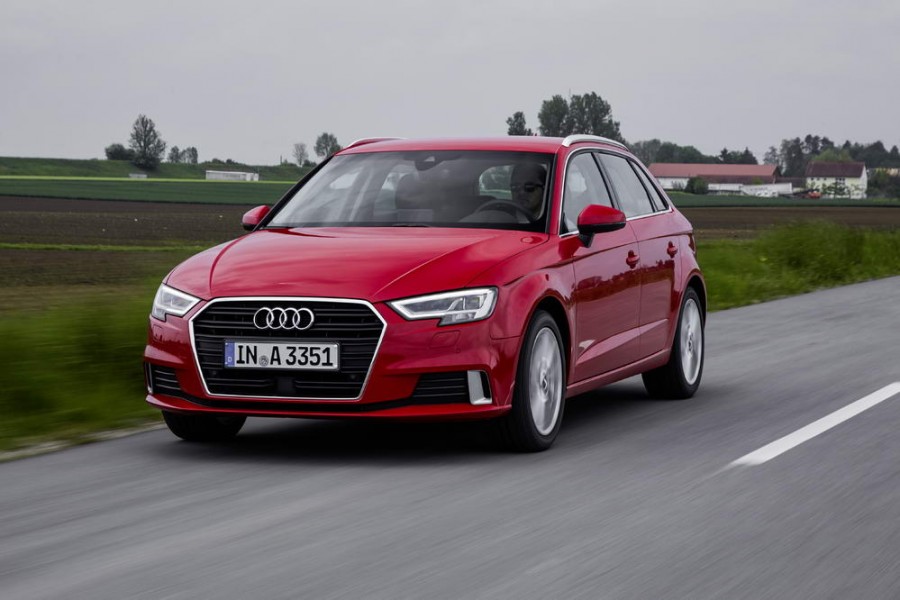 Audi A3 Sportback 1.0 TFSI review
Audi A3 1.0 TFSI vs. Lexus CT 200h: the three rivals here are all German and have a variety of turbocharged petrol and diesel engines of varying frugality. The charismatic petrol Audi is far nicer in all respects than the CT. 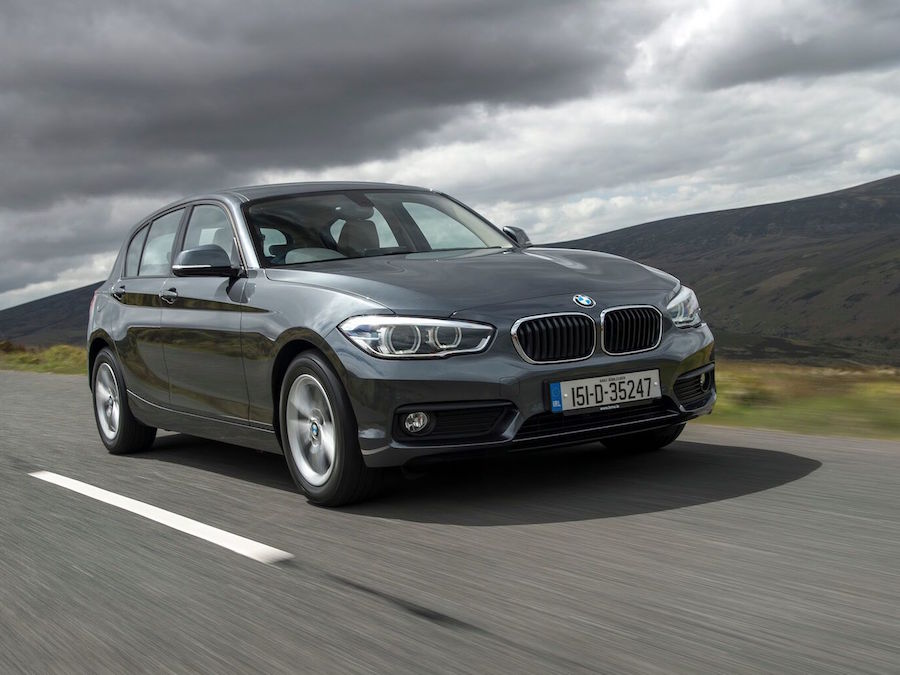 BMW 1 Series three-cylinder review
BMW 116d vs. Lexus CT 200h: the BMW has the best infotainment system of all, an area the CT is particularly weak on, and the glorious little 1.5-litre three-cylinder diesel engine really makes the 1 Series hatchback shine. 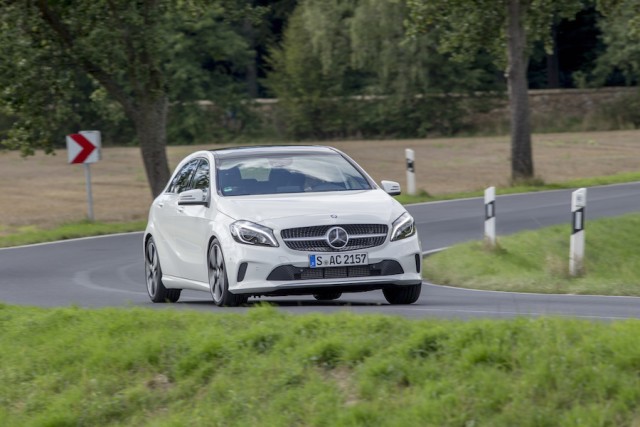 Mercedes-Benz A 220d review
Mercedes-Benz A 200 d vs. Lexus CT 200h: Mercedes' 2.1-litre diesel engine is showing its age now and it has the least intuitive infotainment of the German 'big three'... yet the A-Class remains a better car in most respects than the Lexus.