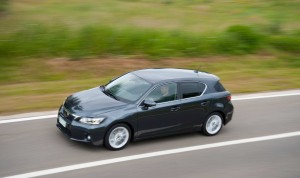 With one of the lowest emissions figures in the industry, Lexus' new CT 200h goes on sale in November.

Lexus new CT 200h is an Audi A3 and BMW 1 Series rival with a hybrid drivetrain. Miniscule CO2 emissions and great fuel economy impress, but the CT 200h doesn't seem to know whether it's a sports hatch or a green cruiser.

Compared to the show car that preceded it, the CT 200h is a bit awkward in its looks. The abrupt rear isn't dissimilar to Lexus' previous generation IS 200 wagon, where the wraparound window and busy light detailing are distinctive. The profile and nose are obviously from the Lexus school of design, though there's little drama to the lines. The CT 200h is smart enough, but it doesn't particularly stand out.

Inside it's a bit different. The dash is busy with buttons; the top part covers the climate control functions and the lower centre console takes care of entertainment and the transmission. The gear selector is a futuristic-looking chrome topped lozenge, while the mouse-like 'Remote Touch' system takes care of the navigation and many vehicle functions - without the finesse of some rivals' systems. It's all decently finished, though it takes some time to get familiar with all the numerous functions, settings and modes.

Forget the actual trinkets for a moment and consider the numbers that are associated with the CT 200h. The CO2 emissions of 87g/km makes a mockery of the 120g/km limit for that lowest Irish tax band and is one of the lowest figures for any car currently on sale. An official combined consumption figure of 4.1 litres/100km impresses, too.

Irish pricing and specification has yet to be finalised, but expect a starting price of about €30,000. The €2,500 VRT rebate for petrol-electric hybrids finishes this year, remember. We expect dual-zone climate control, Bluetooth telephone connection, LED lamps, six-speaker audio and 16-inch alloy wheels as standard, though it's such a pity that Lexus is adamant there won't be regular petrol or diesel engine options in the CT.

The case for the CT 200h starts to look a bit shakier on the road. Literally. The combination of 17-inch alloy wheels and suspension that's overly firm means the CT 200h rides poorly on European roads. Smaller 16-inch wheels do lessen the effect, so hopefully they'll be standard in Ireland. The ride comfort is disappointing, as the CT 200h does represent a unique proposition in the marketplace - as a premium step up from Toyota's Prius, or a downsized green choice for existing premium customers. Suspension aside it drives competently enough, with the combined 1.8-litre petrol and electric motors working seamlessly together. It's particularly good at running silently through towns on electric power alone, while motorway cruising is quiet and easy.

It's not particularly fast, but its 10.3-second 0-100km/h time is respectable and it pulls away briskly enough from junctions and traffic lights. The steering is direct and quick, but it's devoid of any real feedback. Overall the CT 200h feels secure on the road, but lacks the fun-to-drive character of its rivals.

The CT 200h is different, and it perhaps needs to be more resolute in being so. The overly firm suspension and the option of a Sport setting (which claims to increase throttle and steering response and increase revs and hybrid power, though it felt little different to us) does send out mixed messages. Had Lexus had the courage not to chase a 'sporting' market and give the CT 200h a more comfortable set-up to match its impressive powertrain it would offer a truly unique, premium, green proposition. A softer ride would perfectly suit the kind of effortless, comfortable driving that buyers are more likely to desire in such a car - and the CT 200h could so easily do this.

Attention to detail remains one of the driving forces behind Lexus. Underlining this is the clever automatic use of the heated seats to help warm the driver rather than using (less efficient) heat from the climate control system.

Safety equipment is plentiful, so Lexus is anticipating a Euro NCAP five-star score - all CT 200hs come with eight airbags as standard.

The CT 200h represents something of a conundrum for Lexus. With it the firm is entering the hotly contested compact premium segment - which has traditionally been dominated by cars with hard riding 'sporting' suspension. With the CT 200h representing something of a paradigm shift thanks to its hybrid powertrain Lexus could have offered a softer, more comfortable car to match its green-focused technology. As it stands the CT 200h is compromised when it doesn't need to be. We think that Lexus has missed an opportunity to not just offer class-leading economy and emissions but to combine it with fine riding comfort to match. If you decide it's for you, you can get your order down from November.