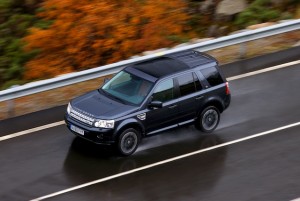 This might be a new version of the Freelander 2, but the changes aren't that obvious to the untrained eye. There are some exterior changes, which include a new front bumper and grille, alloy wheels and colour options, but these have the effect of a freshening-up at most. Despite being around for quite a while now, the Freelander still looks pretty sharp and is much more rugged than some of the latest batch of curvy pseudo-SUVs.

Inside there is a range of new seat styles and finishes along with new instrumentation.

It has been a while since we last drove the Freelander. That was the Stop/Start model, which went some way to improving the car's pretty poor CO2 emissions figure. This new car features an improved version of the technology, which works better and faster.

But the real news is that the 2.2-litre diesel engine has been sliced and diced to create two new versions, one with 150hp and another with 190hp. Both have the same torque figure of 420Nm. However, now you have the option of having your 150hp version without the heavy and perhaps unnecessary four-wheel drive gubbins. This not only saves you the weight of an average man (75kg), but also makes the Freelander less of a gas guzzler, dropping the 150hp version to as little as 158g/km in terms of emissions, or motor tax Band D to those of you who think in tax bands. Fuel economy in the manual version is an impressive 6.2 litres/100km.

You can add four-wheel drive to this new 150hp version without moving out of Band D (165g/km), but if you add an automatic transmission to the 150hp 4x4 model this jumps to Band E (185g/km). That is the same CO2 figure the 190hp SD4 emits, which only comes with all-wheel drive and an automatic gearbox. Got all that?

With the entry-level Freelander only dropping 10hp (in comparison to its predecessor), yet proving more efficient, there is no drop in performance despite a nine percent improvement in fuel economy. We tried both the 150hp 2wd and the 190hp 4wd versions and both felt pretty urgent. What was perhaps most interesting about the two-wheel drive version was that we successfully completed a Land Rover Experience off-road course - that would scare most off-roaders - without too much fuss. It was certainly more than most 4x4 owners would ever dare try themselves, yet the two-wheel drive Freelander used a combination of torque and decent grip to perform way better than we thought it would.

Suffice to say that you can buy the new 2wd 150hp model without feeling any way short-changed, either on or off-road. On road manners are good in the Freelander. It isn't perhaps as accomplished as something like a Ford Kuga through the twisties but it doesn't lean too much. You do notice the extra grunt of the 190hp engine, but it's only a slight improvement and not worth the extra money or tax in our opinions.

The headline news is that the 150hp 2wd E spec version of the Freelander will cost €29,995. That may get customers through the dealer door, but we'd recommend they stump up a few Euro more and get the XE version. Neither are specced to the way we'd really like but it is acceptable. E spec gets 16-inch alloys, manual air conditioning, ESP stability control and not a whole lot else, while the €32,995 XE gives you 17-inch alloys, automatic climate control, a loadspace cover, a heated windscreen and power folding mirrors.

These are very competitively priced and we reckon the 2wd XE model will be the strongest seller. At €44,970, the entry point of the 190hp 2.2 4wd Auto isn't likely to find many homes.

Land Rover expects to sell around 300 units of the new Freelander when it goes on sale in January 2011, with the majority being the new 150hp 2wd version.

The new entry-point and the new tax band makes the Freelander an interesting prospect. Now that you can get one for under €30,000 this could bring a whole new raft of customers to the brand.