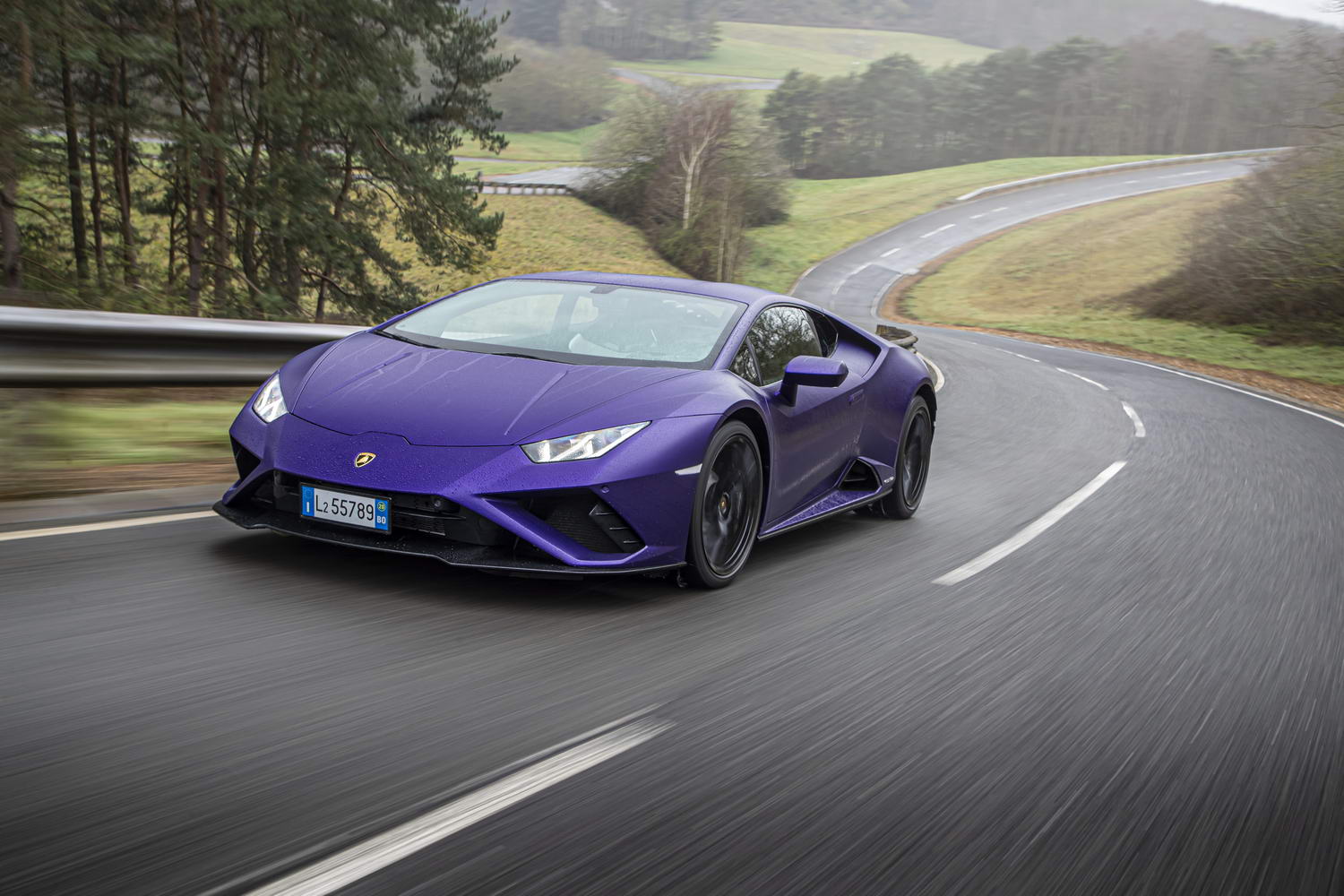 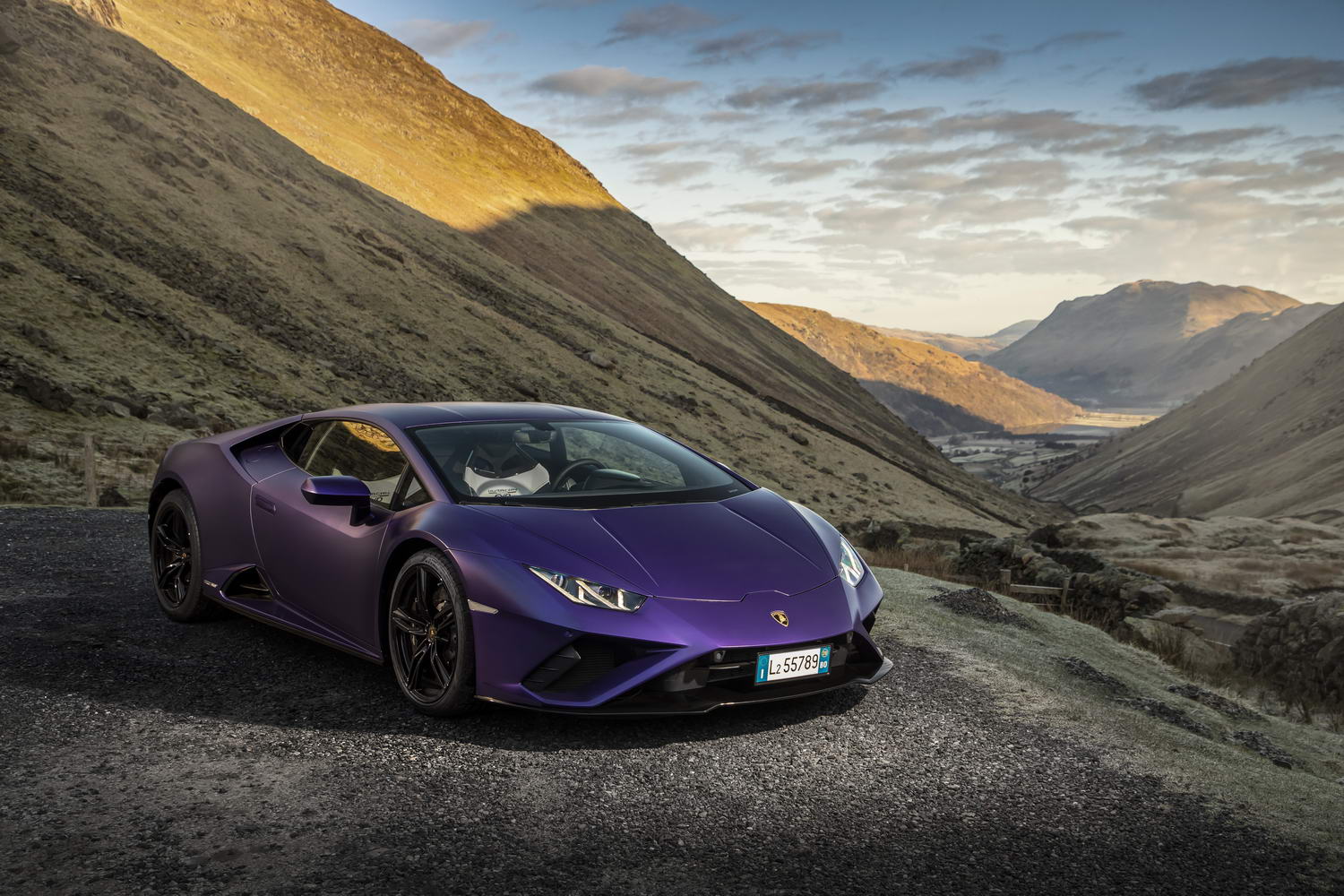 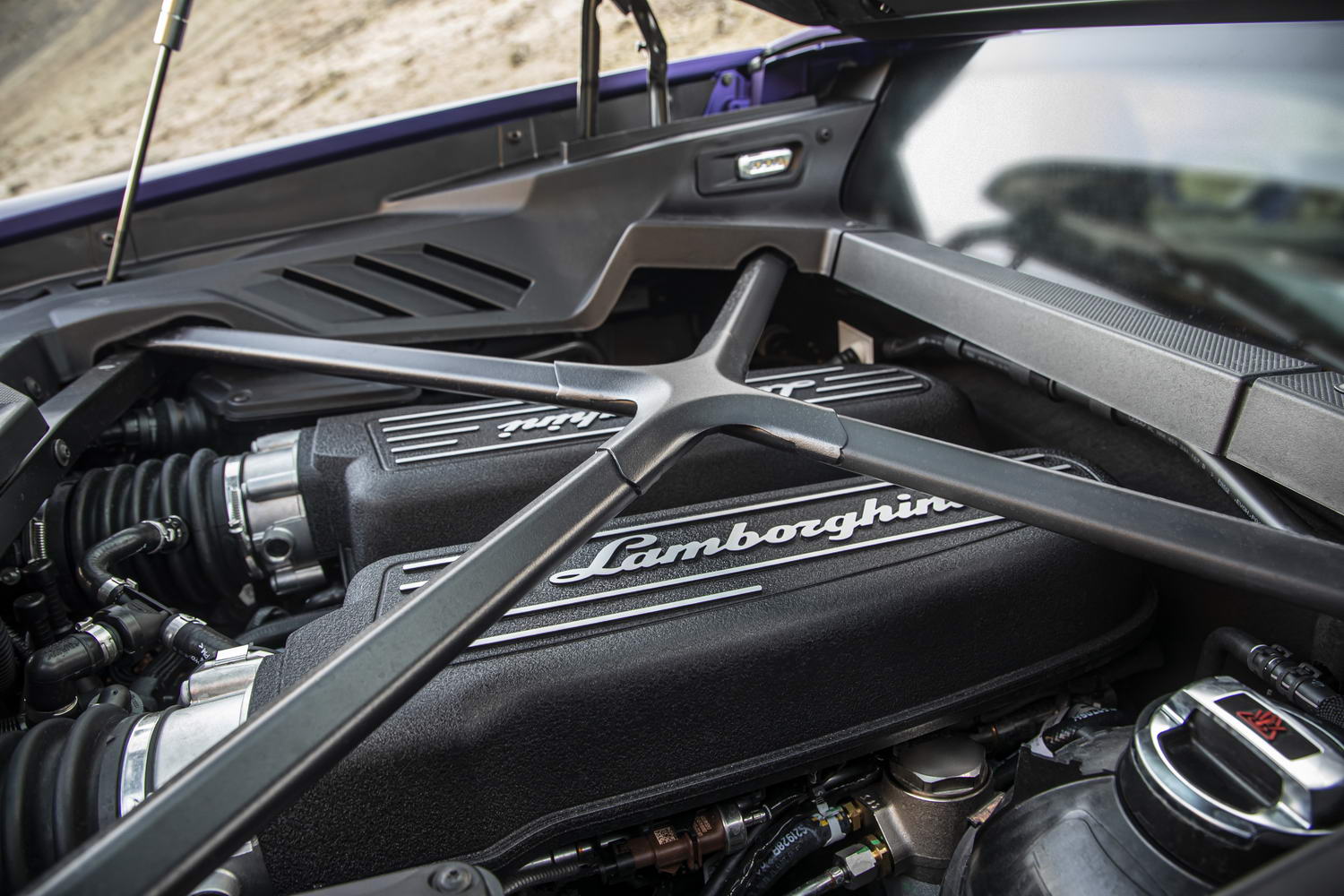 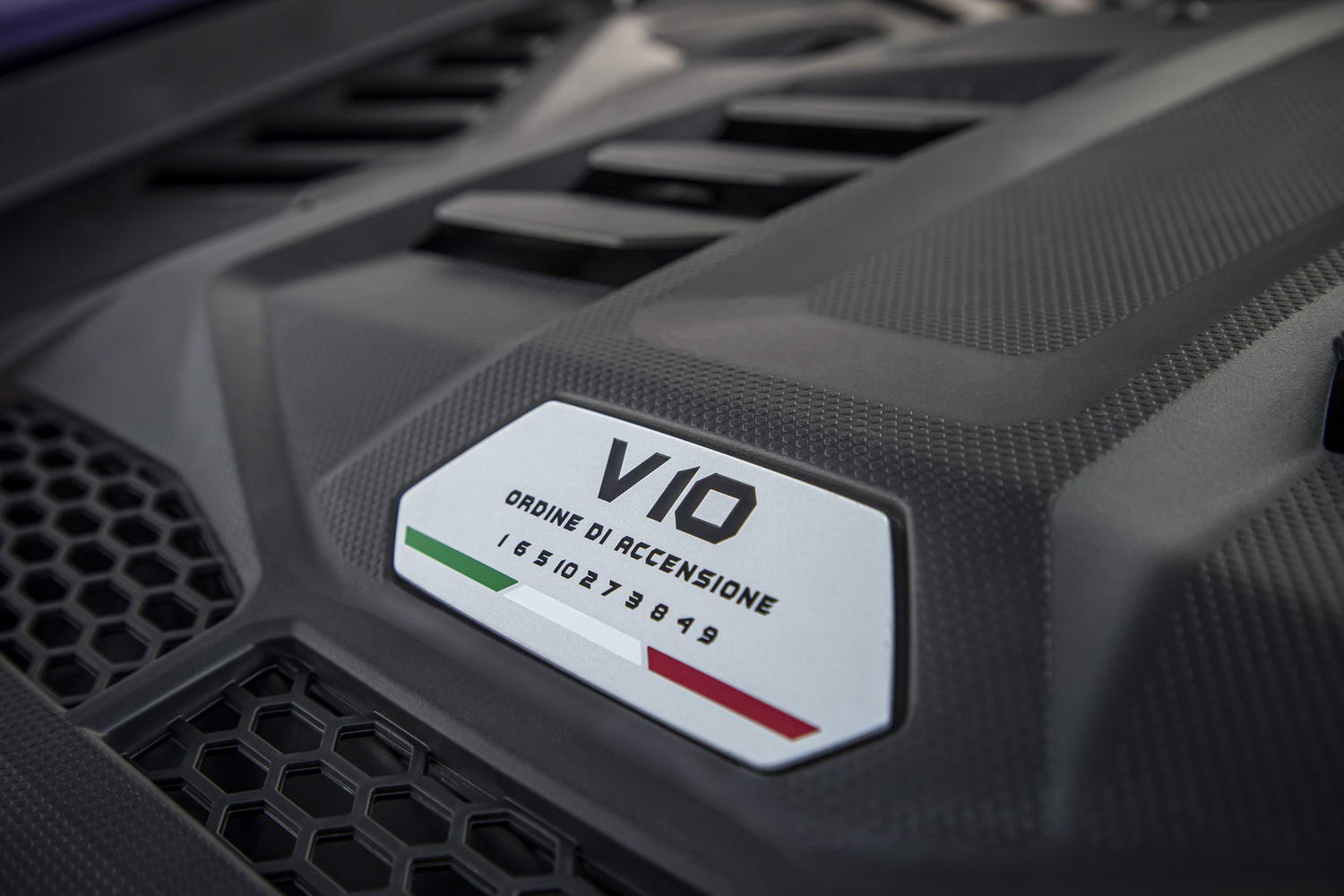 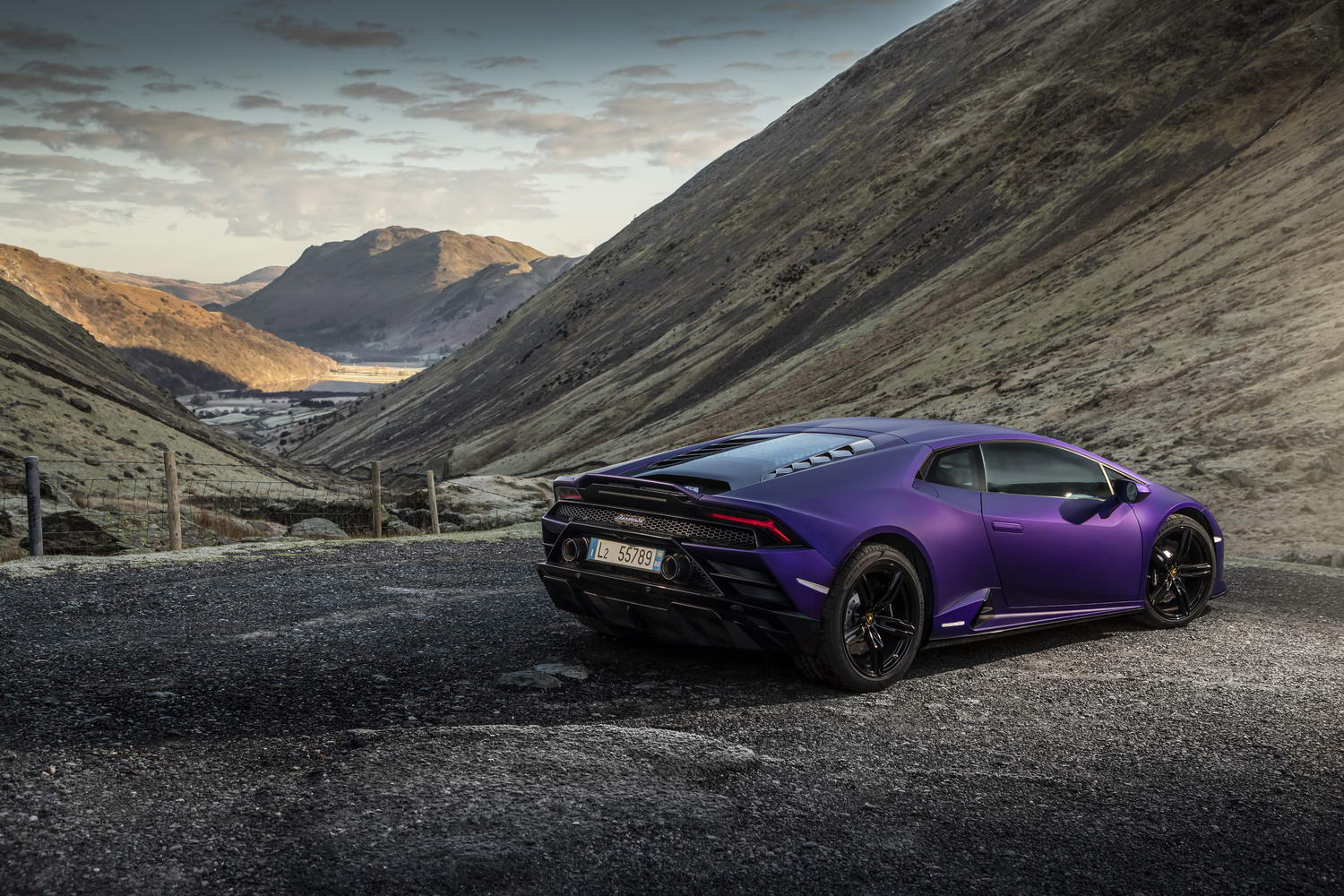 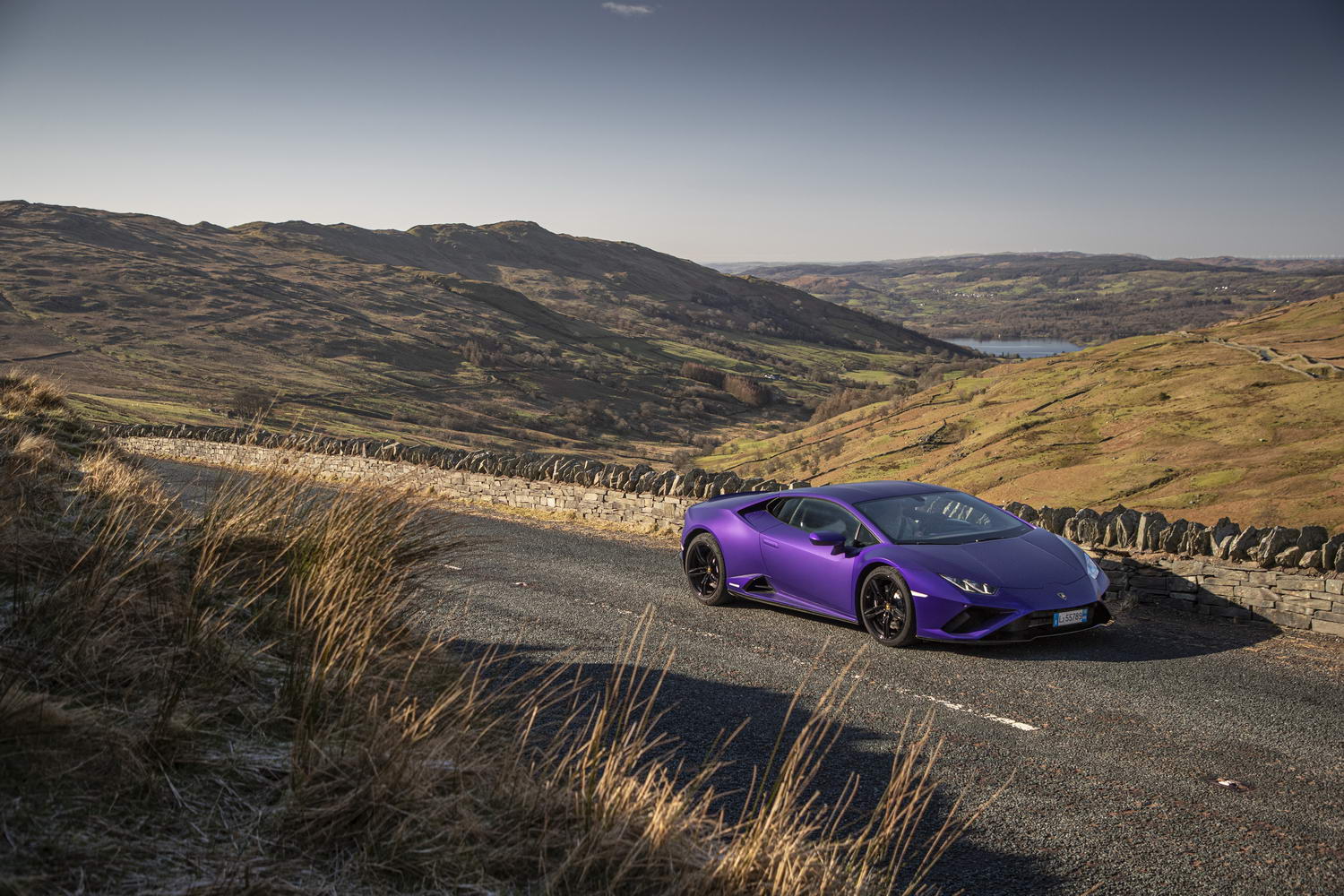 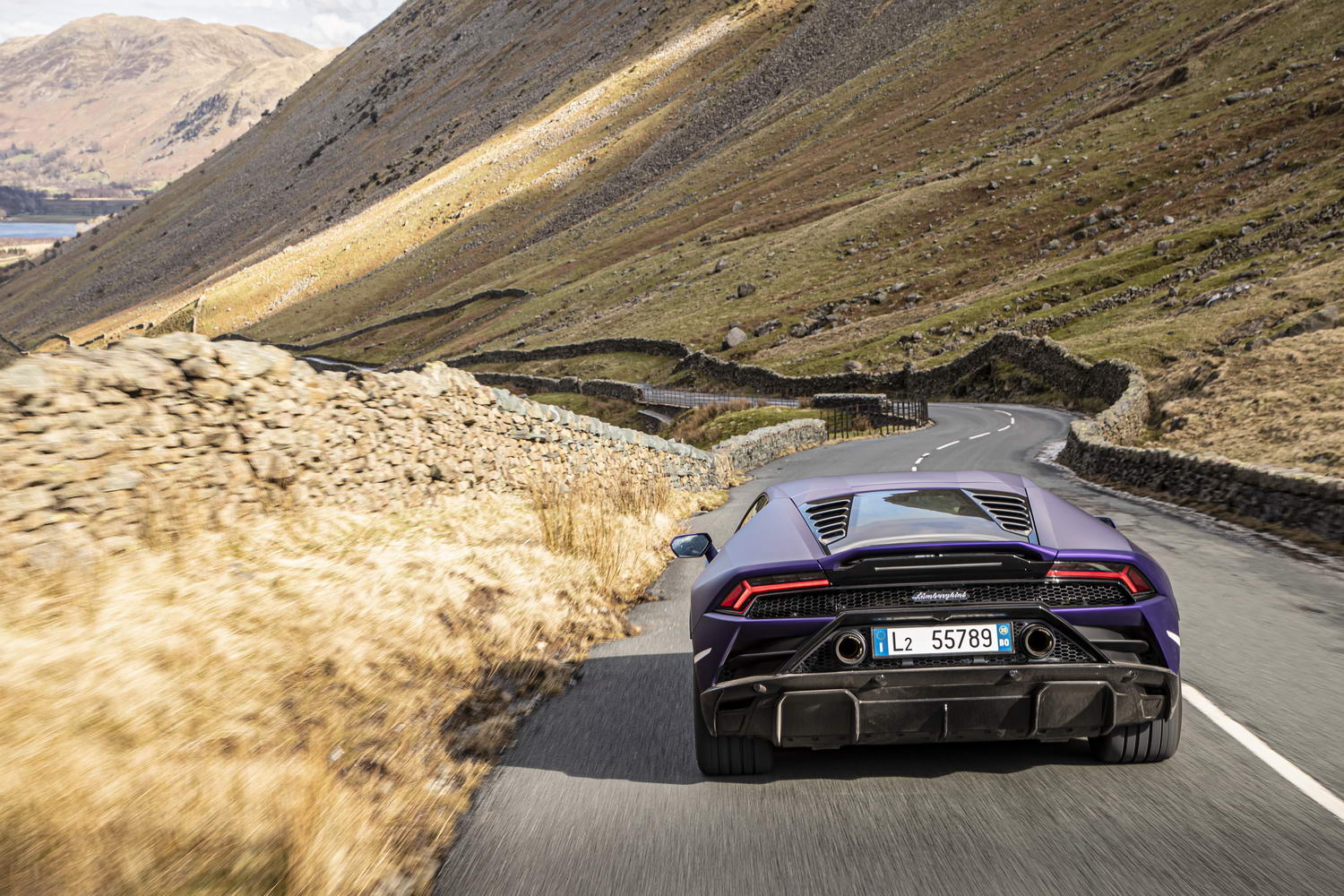 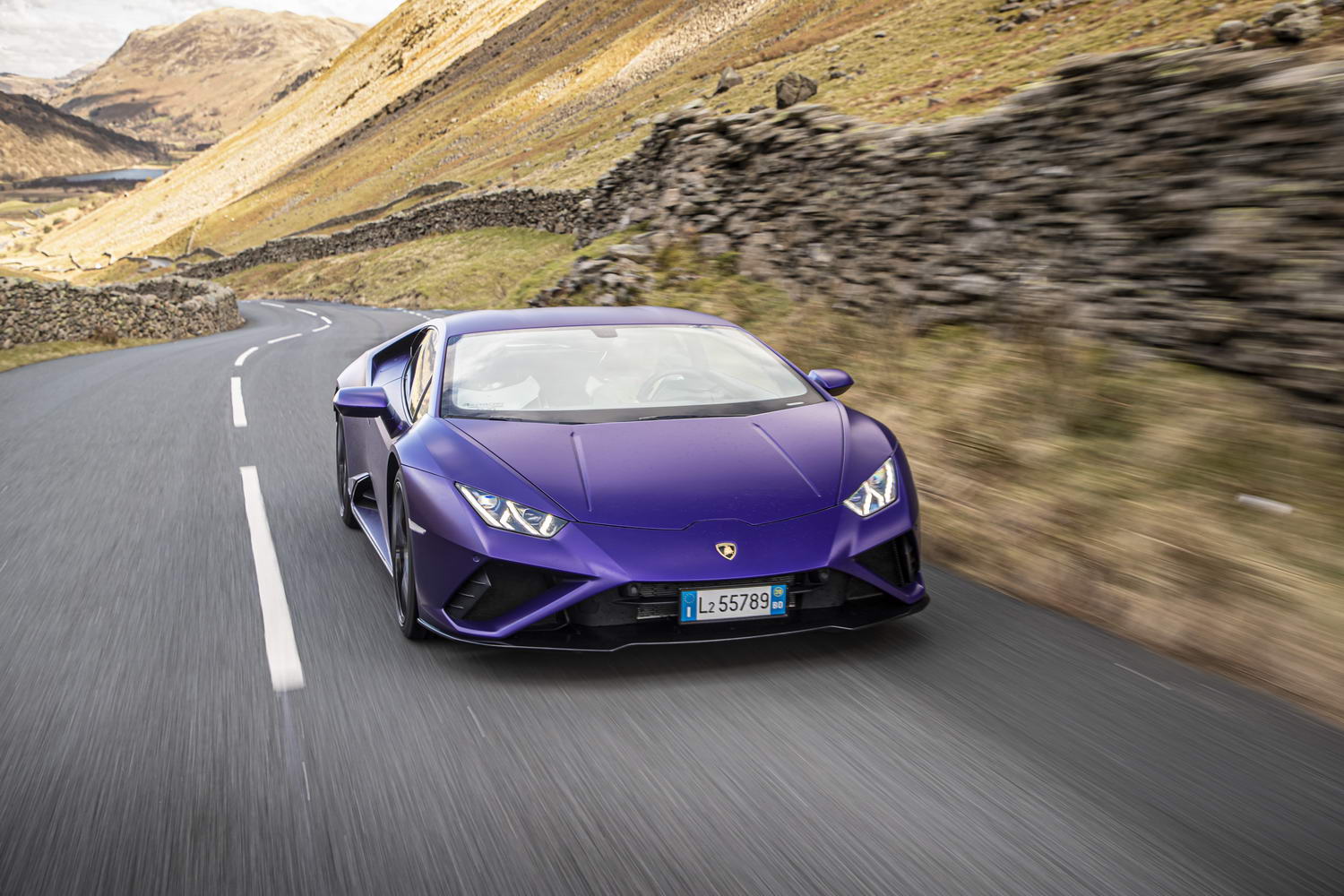 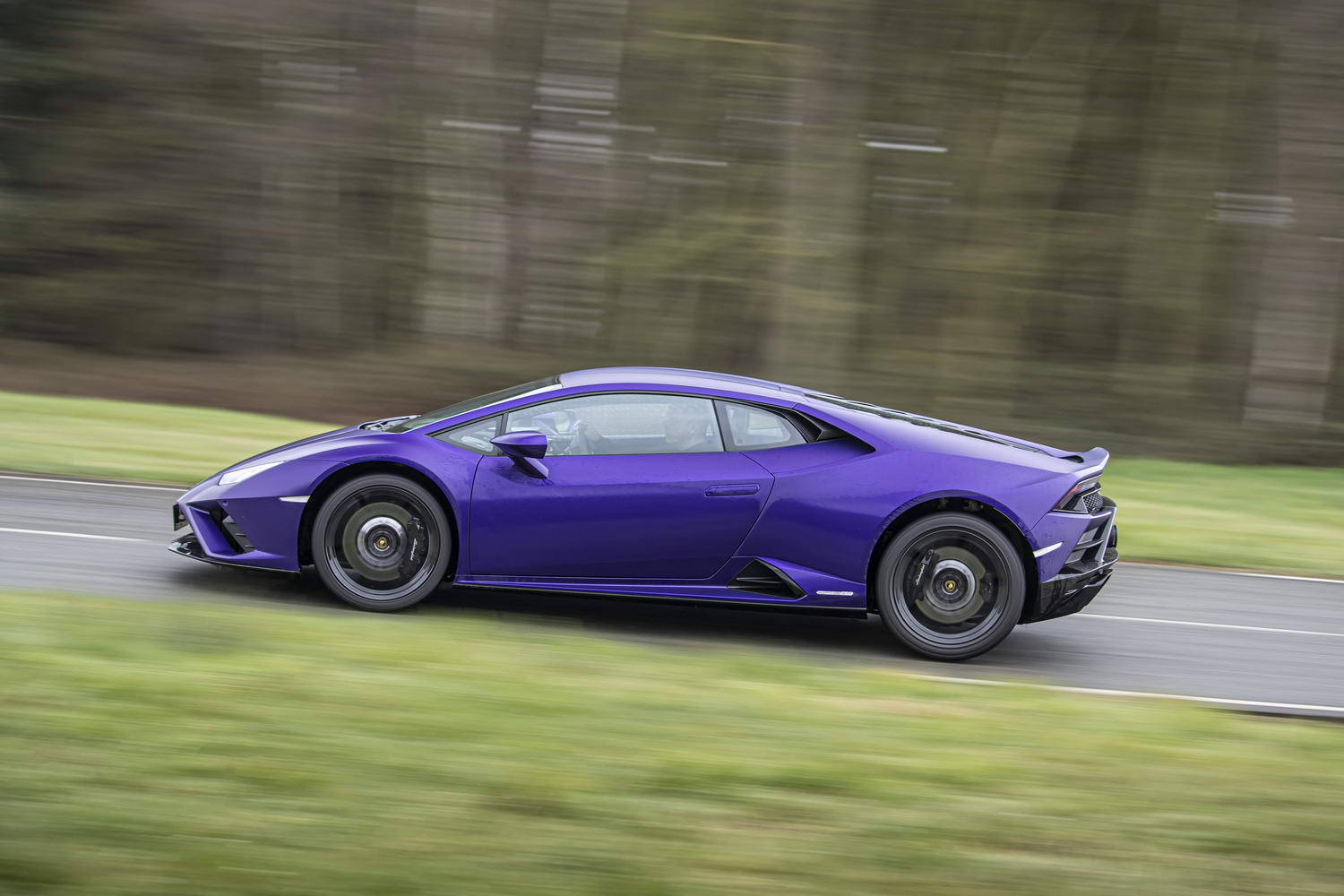 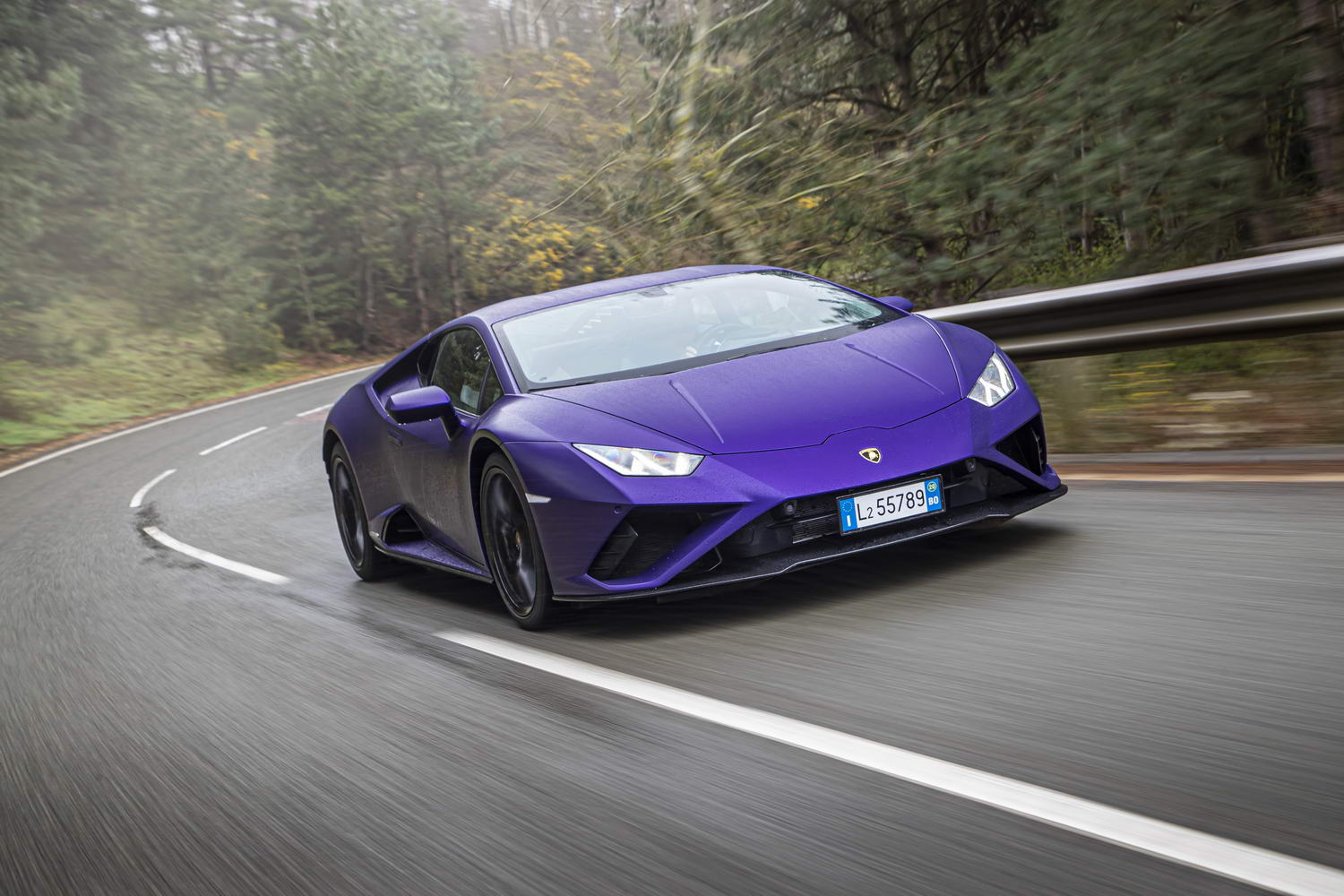 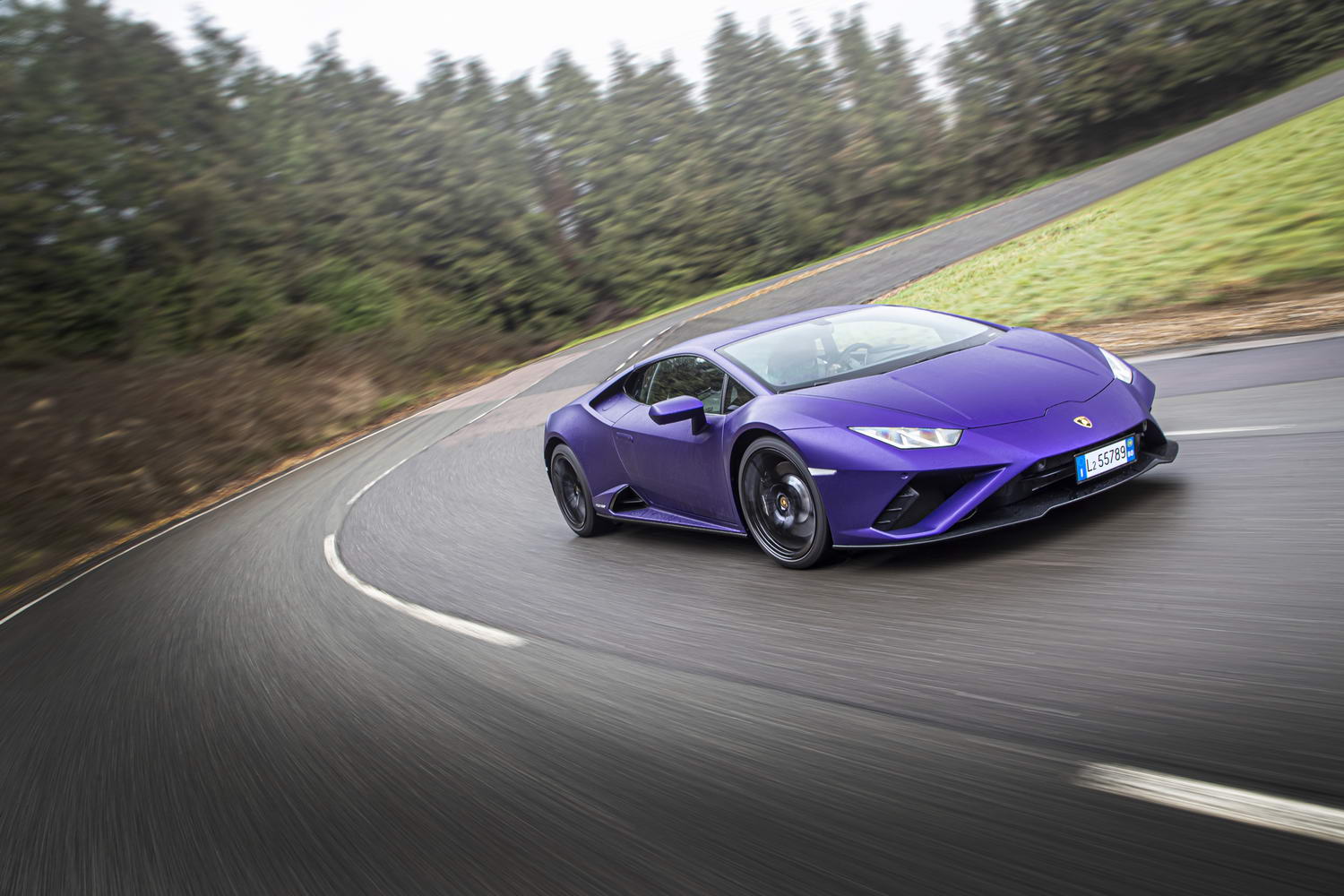 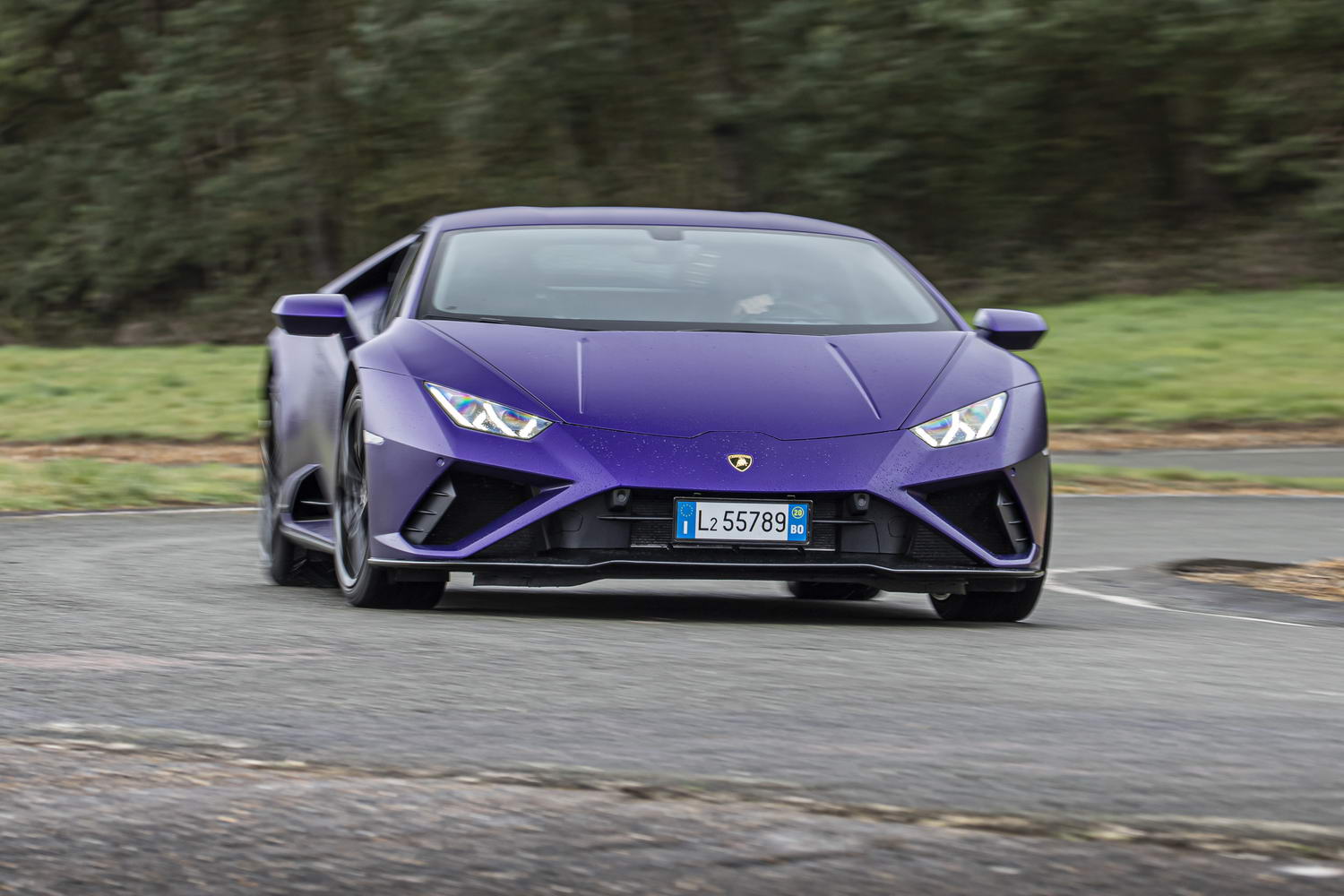 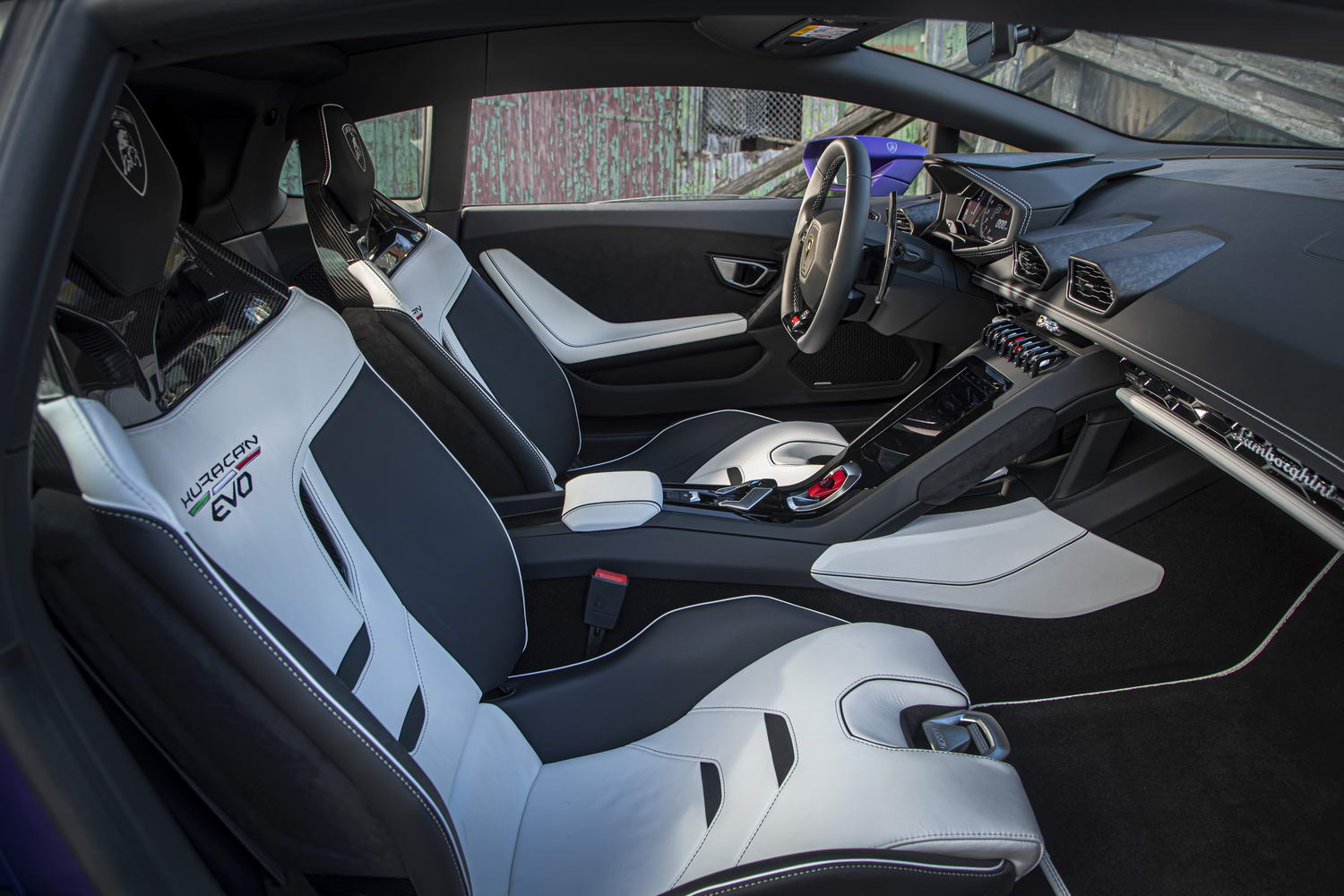 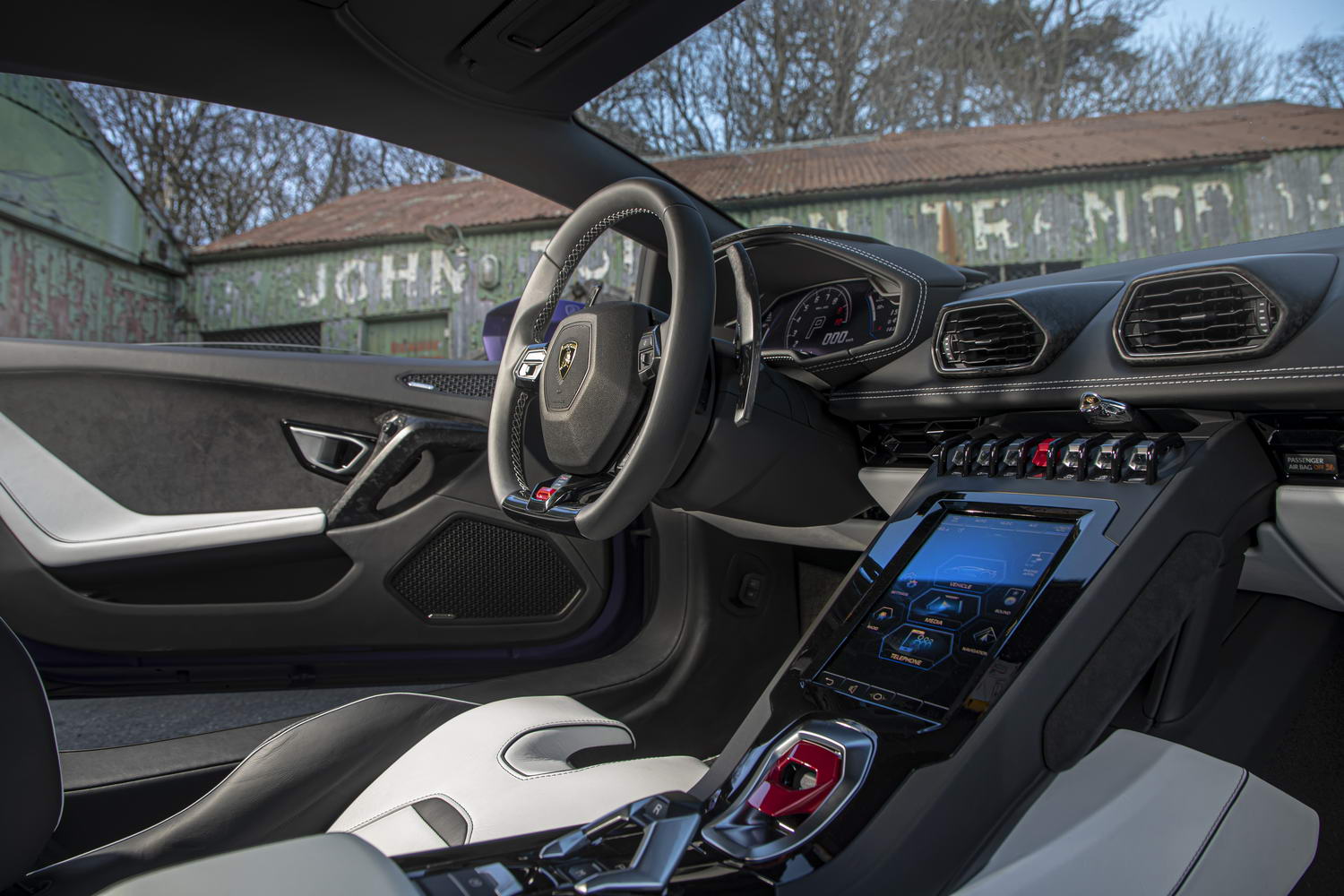 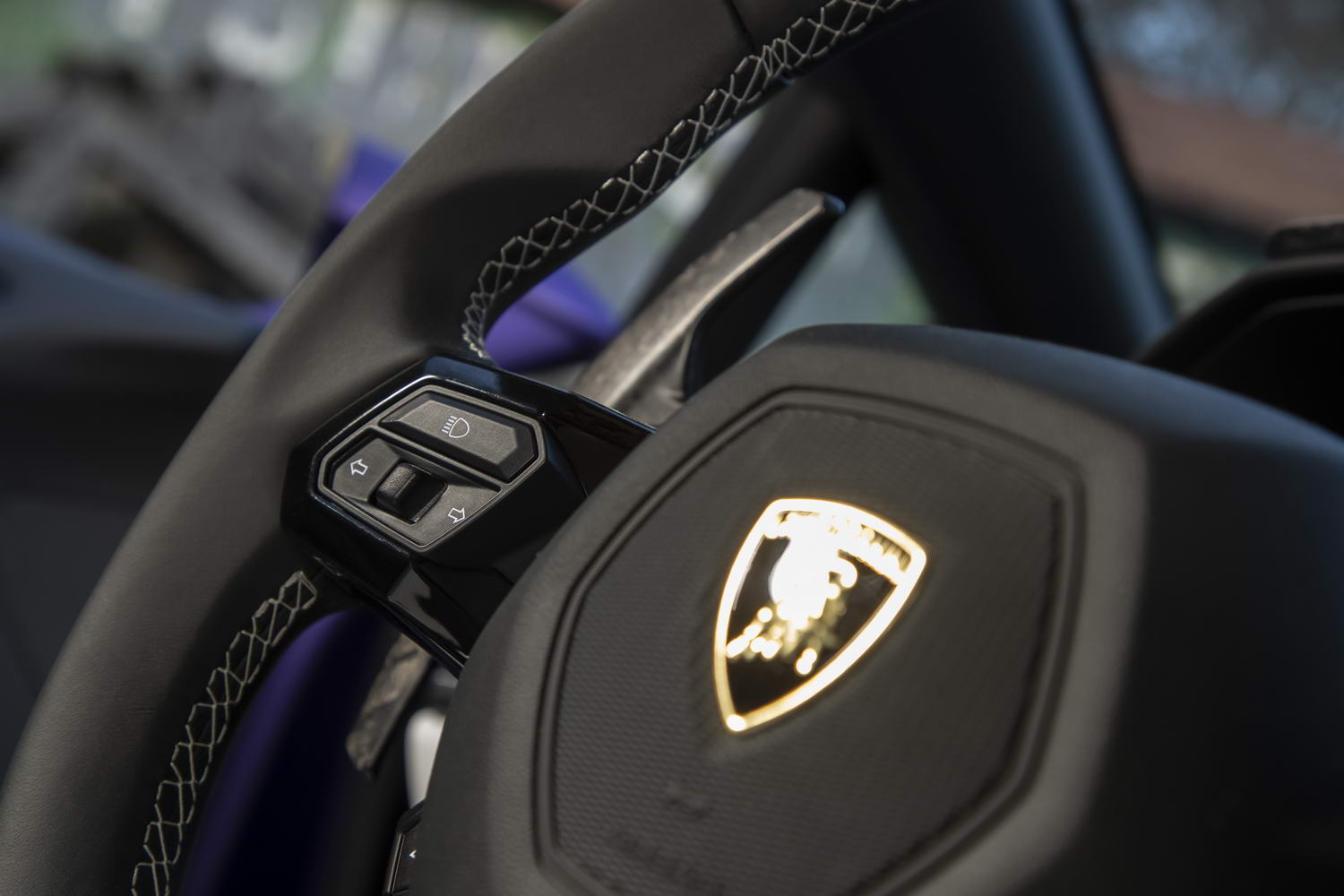 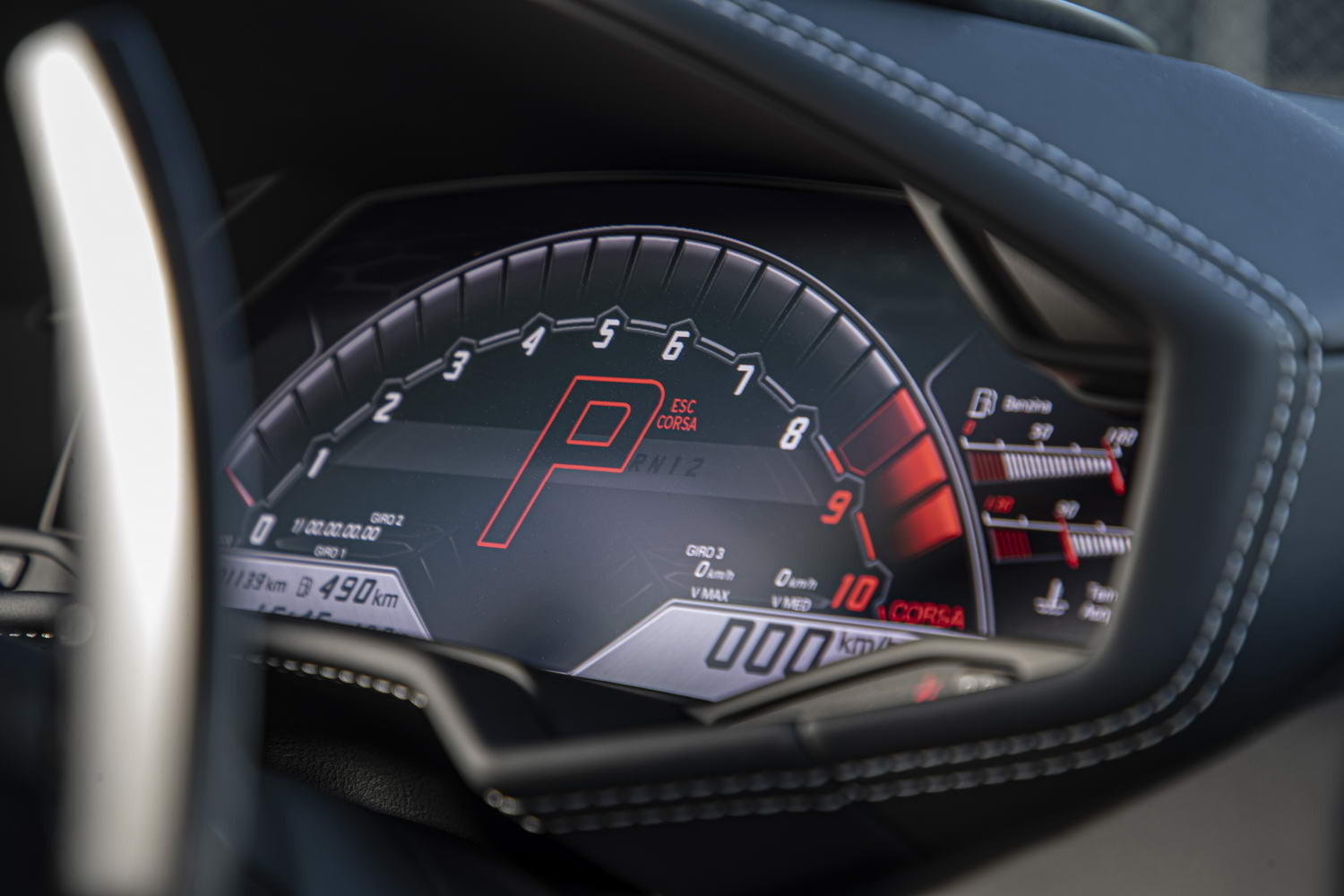 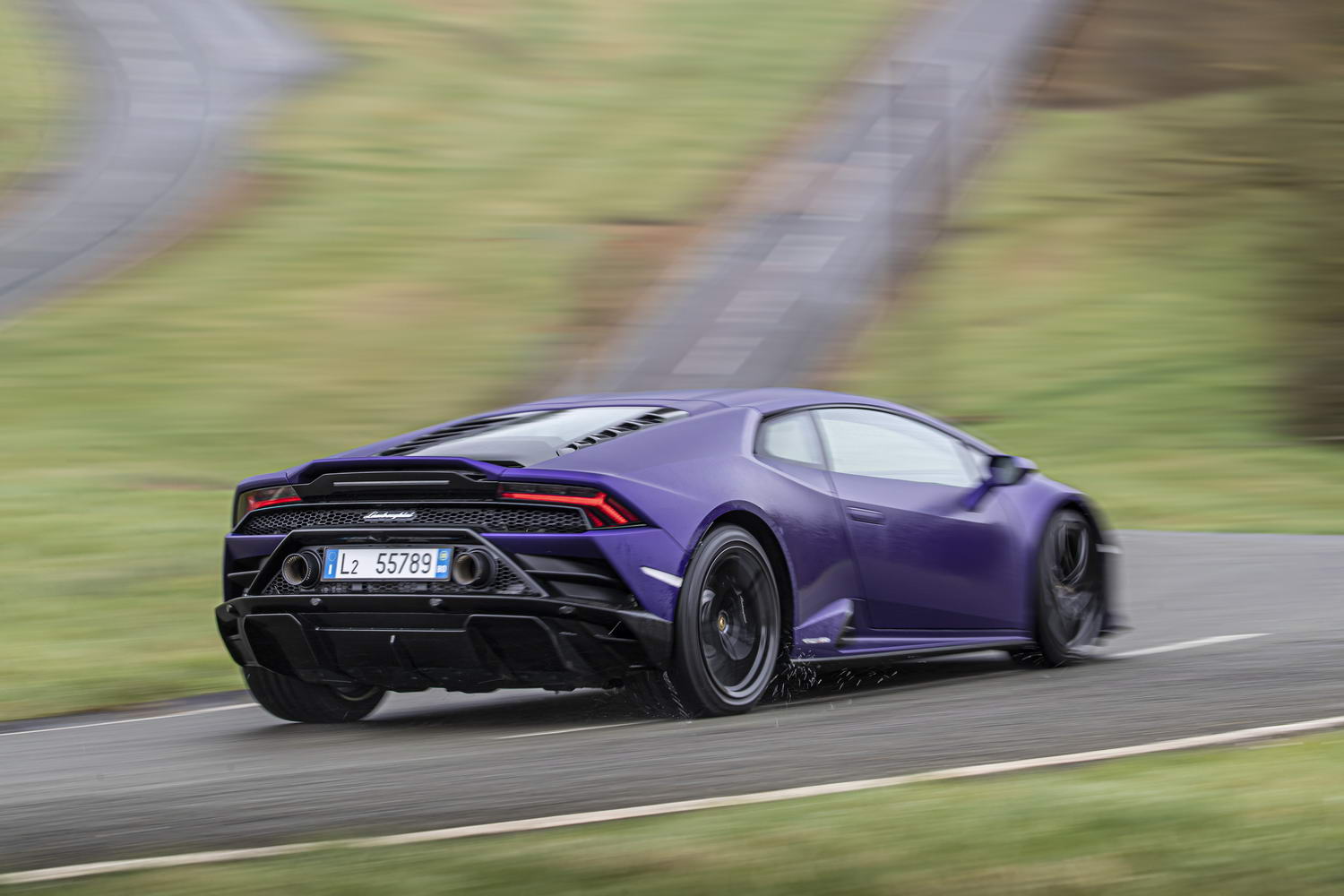 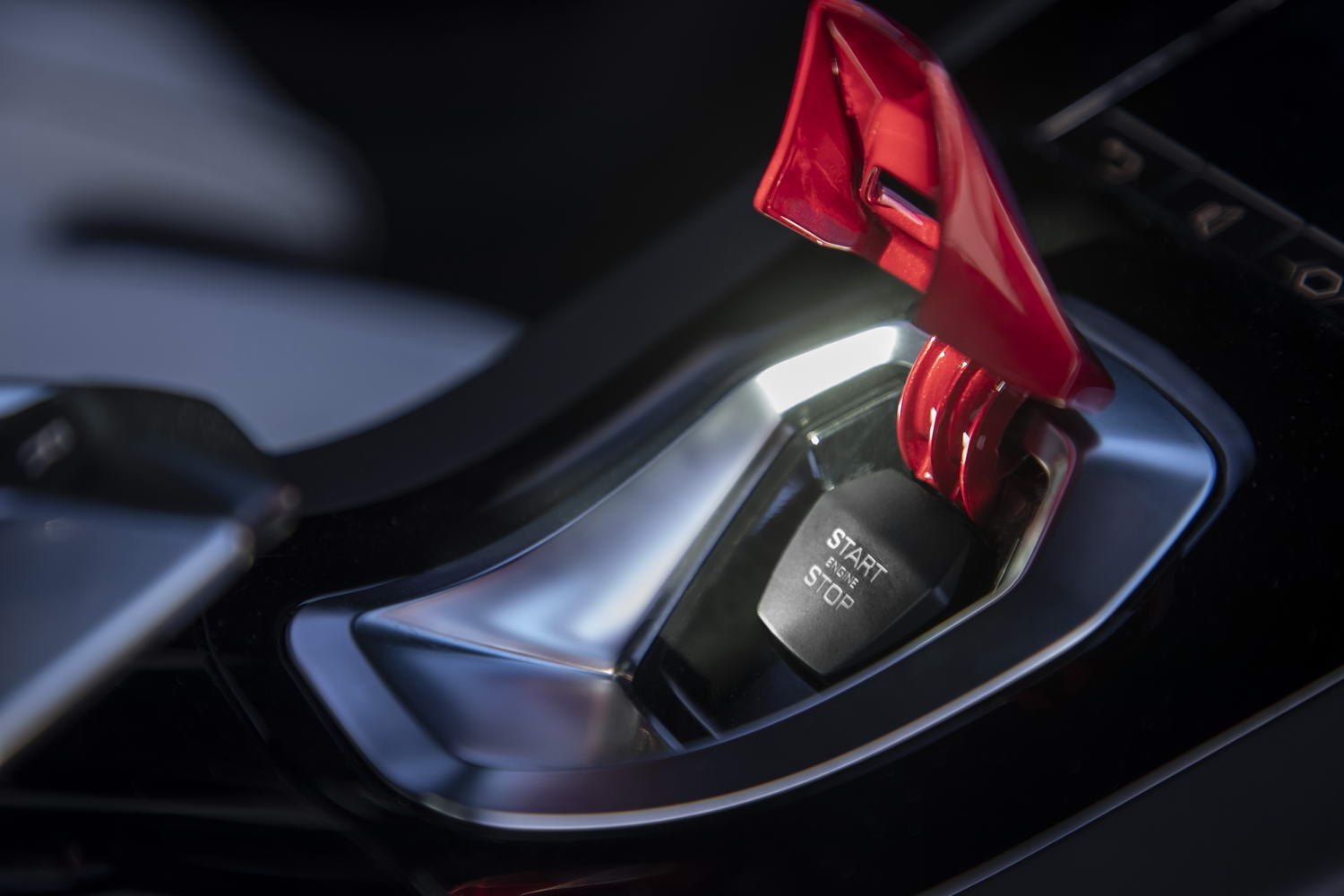 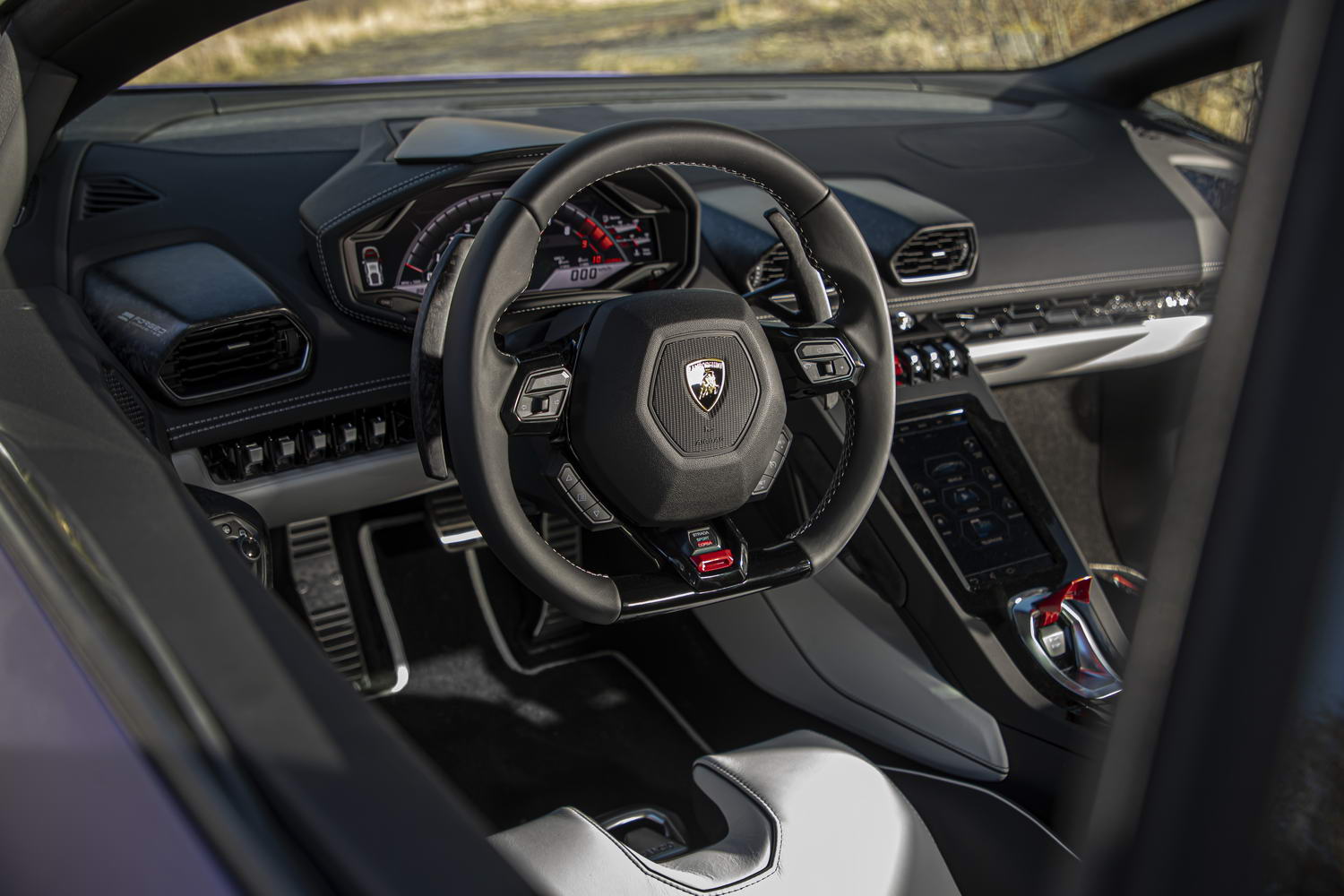 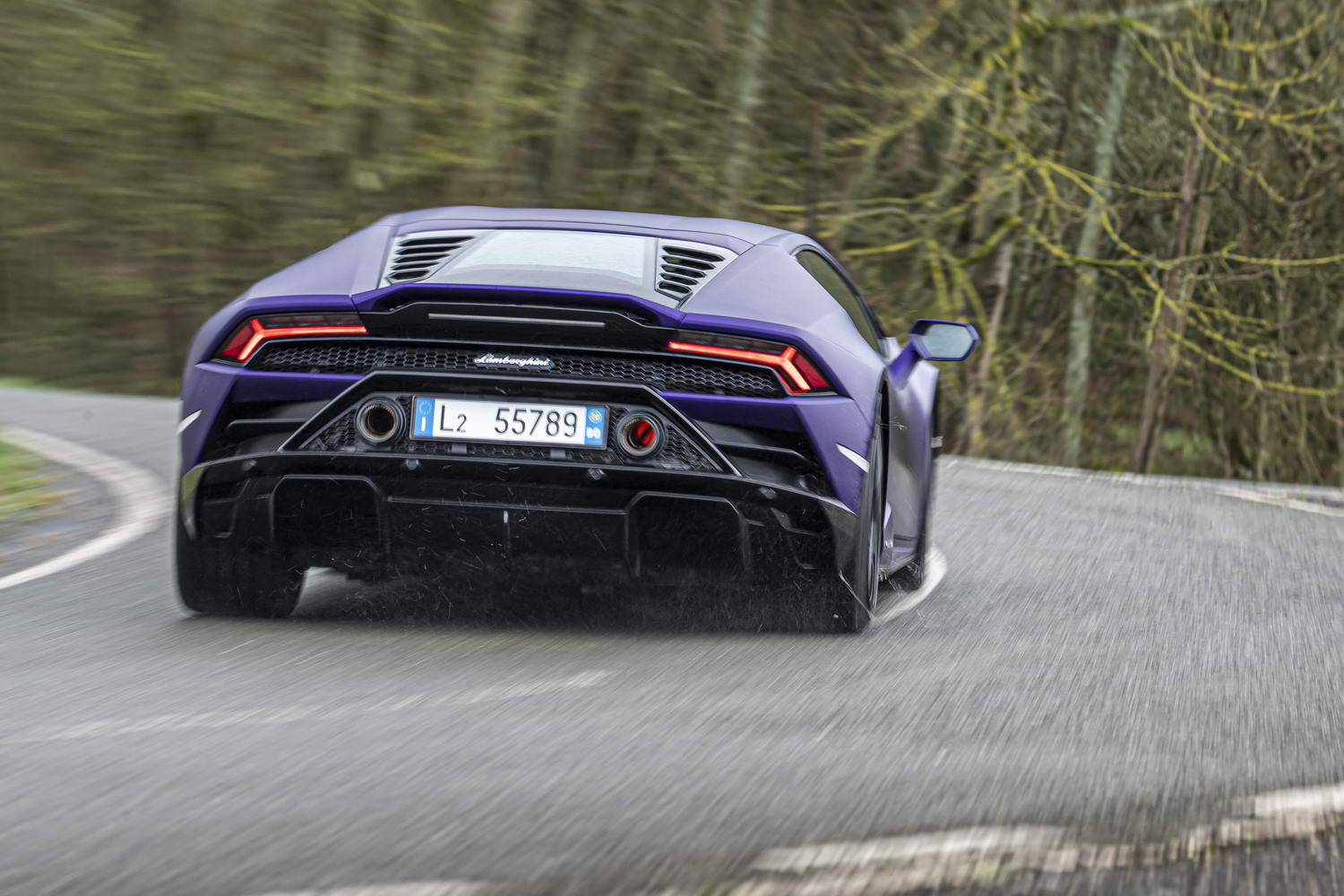 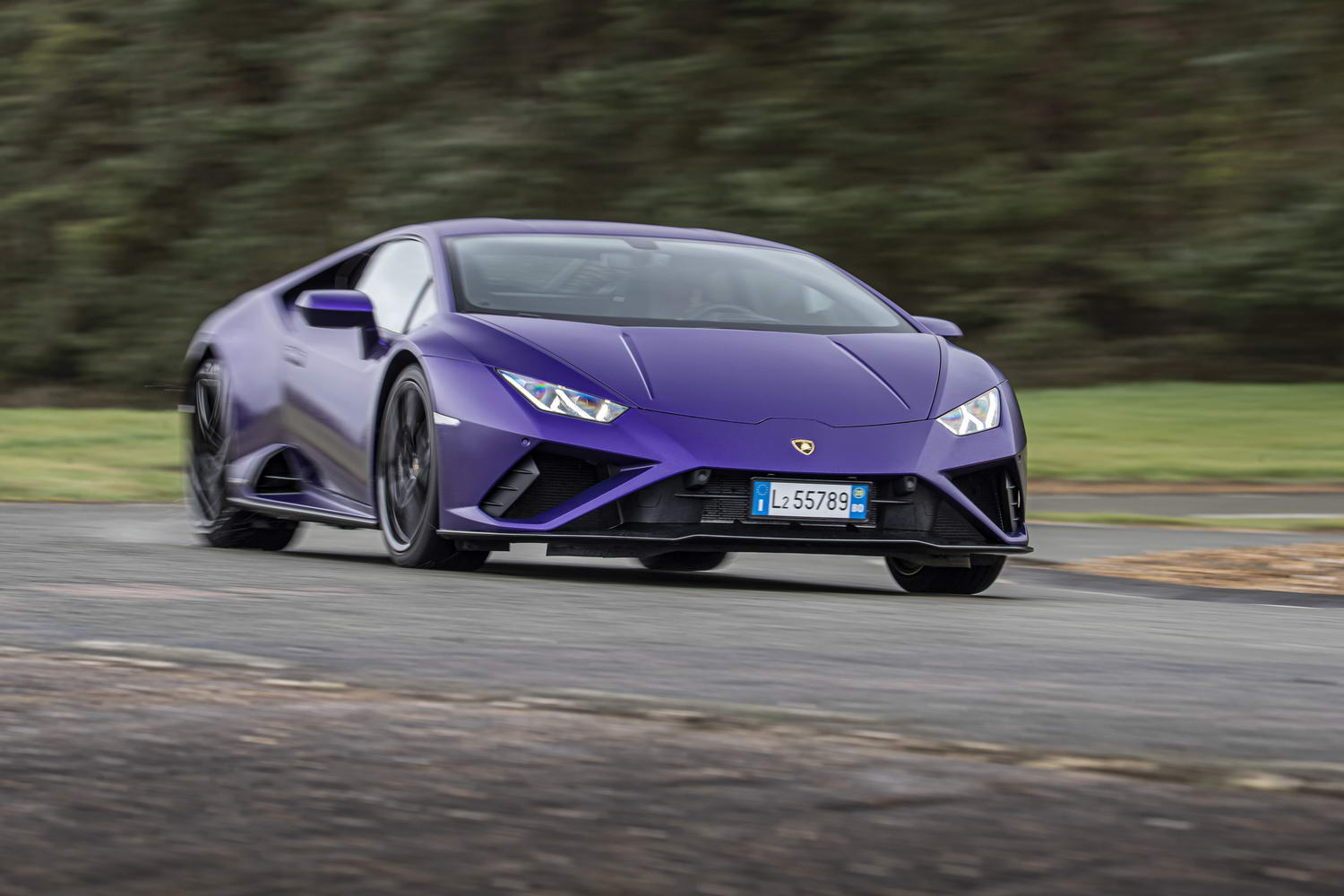 We might be looking at the finest Lambo yet, the sensational Huracan Evo RWD.

Don't be fooled into thinking the Lamborghini Huracan Evo RWD is all go and no show, even when it's wearing an extrovert five-figure matte-effect purple paintjob. For all its arresting visuals and noisy performance, underneath the Lambo's angular body is one of the greatest supercar chassis you can avail yourself of right now. This might be the 'cheapest', most accessible Lamborghini of all but we're here to argue that it's also the finest.

There are few cars in the world with the startling presence of a Lamborghini and even though many would say the Italian company has lost a degree of its aesthetic 'craziness' in the years since Audi took ownership of it in the late 20th century, you can't really complain about the Huracan Evo RWD. It is stunning; utterly, utterly stunning. The tautness of its form makes it look suitably big and imposing, despite the fact it's actually a fairly compact car. It is bereft of wild spoilers and bulging wheelarches, but a series of design-line 'slashes', that preposterously and wonderfully aggressive rear aspect, the remarkably low nose (the leading point of the bonnet hovers below your kneecaps and the very tops of the angry headlights are only just reaching mid-thigh level) and paint knocking on the door of 14 thousand Euro - it's Viola Mel, in case you're wondering - give it the sort of knock-'em-dead, wall-poster status that means discretion goes completely out of the window. Don't go anywhere in the Huracan Evo if you don't want to be seen - it draws attention to itself like nothing else in the automotive world. Thankfully, that attention seems to be wholly, and rightly, positive.

Step inside the Lamborghini and it's another thumping hit. Where the mechanically similar Audi R8 has a typically orderly German cabin that, while it is beautifully built and ergonomically just-so, nevertheless feels a bit sombre and underwhelming in a six-figure supercar, the Huracan's cabin is a fabulous, joyous riot. Hexagon motifs abound everywhere, including on the 8.4-inch portrait touchscreen for the infotainment system, and there are all the marvellous, outlandish Lambo-traditional touches like the rocker switches across the dash and to the side of the steering wheel, a load of buttons on the wheel itself (indicators, wipers and main beam among them), the red missile-like flip-toggle over the engine start/stop button and that bizarre lever to engage reverse gear. The air vents are yet more hexagons and, in our test car, were clothed in a carbon-fibre finish for around €2,750, while a bicolour leather upholstery option (circa €3,000) and the part-carbon sport seats (circa €6,300) just makes this a cabin that's wholly befitting and a great match for the Huracan's aggressive exterior. Oh, and get a load of those skeletal carbon paddle shifts - you'll not operate anything finer in the automotive world, save for the items (sourced from a certain company beginning with F that also comes from northern Italy) that you'll find in the Alfa Romeo Quadrifoglio.

If you're of a certain age and you grew up on a diet of motoring reviews that basically all said 'Lamborghinis: great to look at, ridiculously loud and fast, awful in the corners, diabolical to live with', and you're expecting more of the same from the Huracan... you're about to be sorely disappointed. Or elated? Not sure. Anyway, what we're trying to say is that this car has a chassis to die for, it really does.

There are elements of it that could maybe take a tiny bit more polish, such as steering that is accurate and fast if lacking in genuine feel, and (optional) magnetorheological dampers (c.€2,640) that are perhaps a touch too firm for road use in Corsa mode (this would be sorted by the Lamborghini having a configurable 'individual' setting, but it doesn't - it has Strada, Sport and Corsa, and that's it), but these concerns will only come to light if you're absolutely dead set on benchmarking it against key rivals and attempting to discern almost infinitesimal differences between them.

In truth, you'll drive the thrilling Huracan Evo RWD and wonder why you could possibly want any more driver involvement, any more chassis balance, any more noise and any more absolutely outrageous normally-aspirated-V10 performance from a supercar. Shorn of its front driveshafts and the rear-axle steering of the four-wheel-drive Huracan Evo, the RWD is 33kg lighter than a 4WD Huracan Evo at an overall weight of 1,389kg and that svelte figure makes it a total delight to drive from start to finish. Strada (street) mode is particularly good, as the Huracan in this setting actually comports itself in a relaxed and comfortable manner. Helped by those optional dampers and the standard 19-inch wheels (running Pirelli P Zero tyres, 245/35 ZR19 at the front and 305/35 ZR19s at the rear), the ride comfort is surprisingly pleasant and tyre roar is kept to acceptable levels, rather than being allowed to dominate the passenger compartment. The steering is light and easy to operate, while the seven-speed Lamborghini Doppia Frizione (LDF) seamlessly slushes shifts together. This is no lunatic Lambo; this is, like, approaching R8-levels of civility. There's even a useful and easily accessible 'nose lift' function to ensure you don't ground out the Huracan's no-doubt-mighty-expensive front splitter on speed humps and other low-lying hazards.

About the only criticism of Strada mode, which makes the mad-looking Italian astonishingly docile to drive in regular traffic flow, is that the LDF in automatic mode almost point-blank refuses to shift down from seventh. The Huracan Evo RWD has a throttle pedal with a 'kickdown'-like final extra step and you need to activate that to get the twin-clutch gearbox to respond if you need meaningful acceleration in Strada and you're not prepared to use the paddles to downshift; otherwise, even at 50km/h, if you put your foot down to what you think is full throttle (just before the kickdown step) then the Lamborghini will fall back to sixth only and will therefore slowly accumulate speed, rather than darting off into the distance in a flurry of minor-key bellowing from the V10.

The simple way around this is to engage Sport mode, which is once again disarmingly charming and usable on road. Given that this Huracan relies solely on its rear Pirellis for traction out of corners and on bumpy surfaces, and that Sport mode not only firms up the dampers and steering but also relaxes the ESC functionality, you'd think this would be the point where the Lamborghini would start to become ragged, show off its rougher dynamic edges. Yet it doesn't. If anything, it's even better to drive on the public highway in Sport than it is in Strada, because the gearbox is much more alert and 'seventh-averse' even if you leave it in full automatic mode, while the alluring fluidity of the Huracan's chassis comes to the fore. You can feel the back of the car moving around during significant throttle openings, the steering has enough heft and feedback to it to inform you of the attitude of the front wheels, the suspension lets the car breathe enough with the road... it's magnificent and composed in equal measure.

Yet the genius of it is that there's still a frisson of danger to it all, still a feeling that not just any old driver could get into the Lamborghini, grab it by the scruff of the neck and hope to get away with such antics. There's risk and reward here, things you have to learn about the Lambo's mannerisms and movements before you go provoking it, genuinely useful information flooding back to the Evo RWD's driver that allows them to exploit the chassis more, if they've got the nerve (and talent, more importantly). That's what makes a truly great driver's car and the Lamborghini most emphatically can be called such a thing.

Of course, you can step it up into Corsa and you'll sense just how honed the Lamborghini becomes, but this definitely feels like a track-only setting to us - you can use it on the road and the Huracan will go quickly as such, but there's precious little squidge to the damping in this mode and the steering is exceedingly hefty too. So let's sign off the driving section with the final few pertinent observations: there are not many cars, of any size, shape or price, that have a drivetrain with as much charisma as this one. The razor throttle response and unrelenting, linear shove of the V10 doing its thing up to the 8,500rpm rev limiter is one thing, but the noise of it! Good grief, the NOISE! How the Italian company has got this one through new-car decibel regs is beyond us, but we're oh-so-glad Lamborghini managed it, because this is a soundtrack from the heavens. The exhaust spits crackles and thuds so loud on the overrun that artillery fire would be a wholly inadequate analogy for the volume of the Huracan's pipes, while the serrated, metallic yowling of that mid-mounted V10 is simply heavenly. This 5.2-litre engine is a gem no matter what car it is installed in, naturally, but where it can sometimes feel like the overwhelmingly star attraction in a package that otherwise lacks a little lustre, in the Huracan Evo RWD it is merely the centre point in an exquisitely cohesive masterpiece of a car. Fitting.

With Lamborghinis not officially sold here in Ireland, we're not going to mark the Huracan in this section. Obviously, due to its CO2 output and high price in other markets, a starting price of around €290,000 is likely for imports, although our test vehicle had quite a few choice options fitted for a ticket of more than €370,000. You do get an incredibly talented and phenomenally desirable machine for that money, although many would argue an Audi R8 does much the same job for a significant chunk of cash less. However, that would underestimate just what an experience it is to drive the sublime Huracan Evo RWD, even for just a few kilometres - and to ignore the fact that similar cars from Ferrari and McLaren would cost even more than this Lamborghini.

The Lamborghini Huracan Evo RWD is a car that seemingly has all the bases covered and, when you consider the exalted level at which it must operate, then you realise the enormity of the achievement the Italian company has delivered here. This is a car that looks outstanding, which has a theatrically majestic cabin, which rides with the sort of elan that wouldn't disgrace a Volkswagen Golf and which is docile enough when you need it to be, and then this is a car that erupts into savagely violent, immensely exhilarating and ludicrously fast performance when the mood takes you, all overlaid with a soundtrack from the gods and a chassis/drivetrain combination of unremitting excellence. Yeah, if you're obscenely rich then you have a lot of choice in the super- and hypercar world right now, but you're not going to make many better selections than this one. This Lamborghini is a quite magical mid-engined machine. 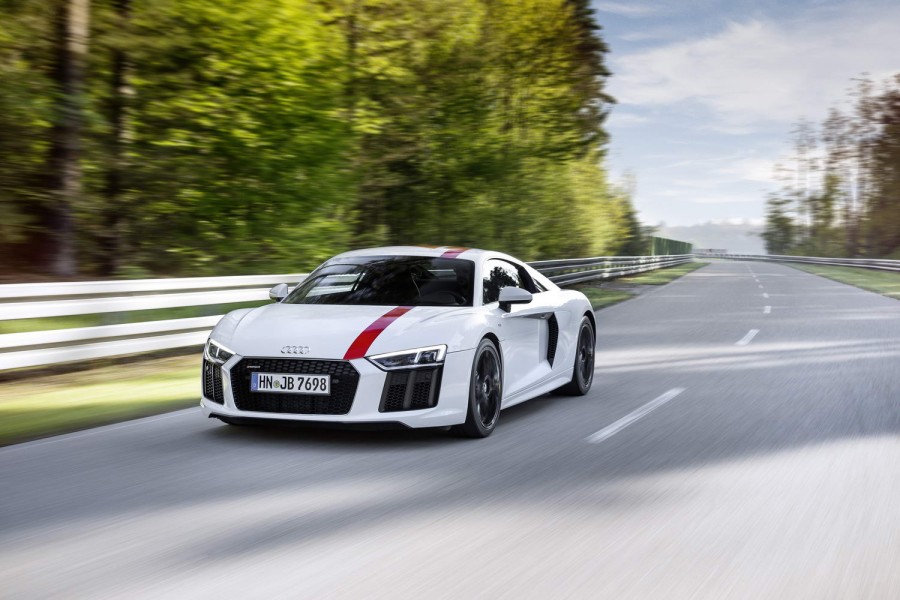 Audi R8 RWS review
Audi R8 RWS vs. Lamborghini Huracan Evo RWD (2020): almost the same ingredients go into the R8's recipe and it's a storming end product, but it's simply a less tasty confection overall than the Lambo - and the Audi's cabin is 'meh'. 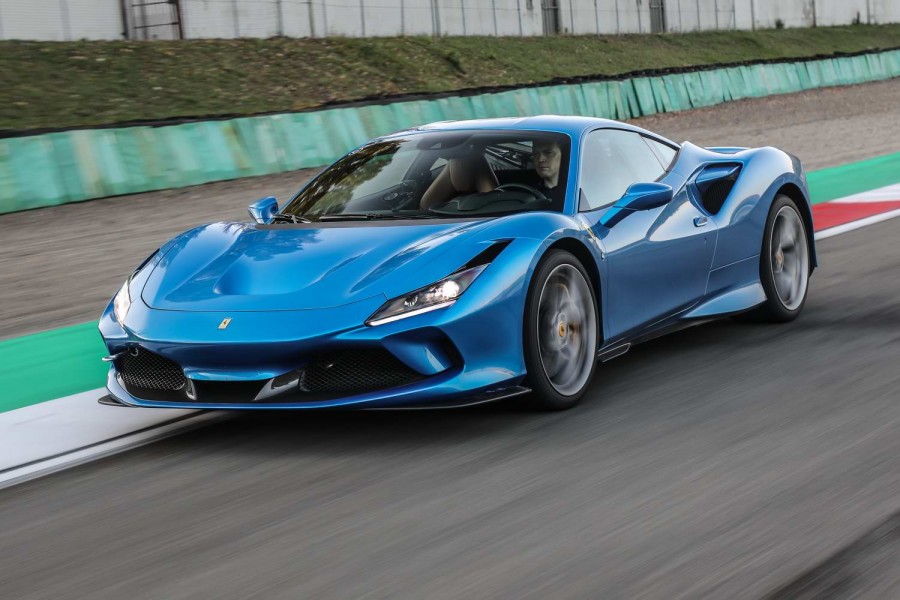 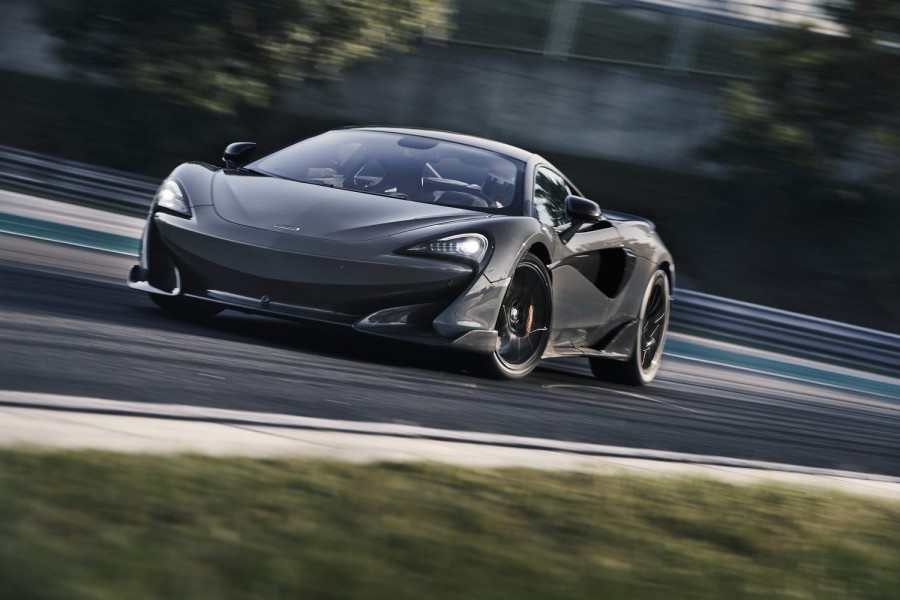 McLaren 600LT review
McLaren 600LT vs. Lamborghini Huracan Evo RWD (2020): an astonishingly involving supercar that perhaps has the Lamborghini's measure for steering feel and damping, but the Macca's engine and exterior aesthetic lack the Huracan's drama.