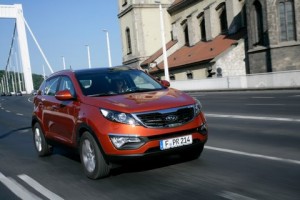 Kia's new SUV has German-like looks and quality, but still has some way to go to match European ride and handling levels.

It is now something of a cliché to go on about how much Korean brands have improved over the years. Together with Hyundai, Kia is now the fourth biggest selling car maker in the world, ahead of Ford, selling more than five million cars globally. Despite the feeling that the SUV market has taken something of a battering, the reality in Europe is that it really is only the larger SUV segment that has been hit hard and the so-called C-segment of SUVs, which includes the new Kia Sportage, remains very healthy.

The Sportage has been around in two generations since 1996 and now the third iteration is set to arrive. Designed by ex-Audi designer Peter Schreyer, the new Sportage is quite dramatically different to the model it replaces, itself a very popular car, which, in 2005 (its peak year) sold 36,000 units in Europe.

This is a seriously good-looking SUV and it isn't hard to understand why when you look at the CV of the man who penned it. Peter Schreyer was involved in the design of the original Audi TT and you can see quite a lot of Audi in the new Sportage. It has a bold front grille and a dramatically different stance, while the rear in particular looks very upmarket. The high shoulder-line and narrow glasshouse give the car a sporty and aggressive look and the large alloy wheels - where fitted - add to this. There are some really nice design details on the exterior too, such as the wing mirrors and door handles that look and feel of high quality. There has been a lot of attention to detail on this car.

Longer, wider, lower and with a longer wheelbase than the model it replaces, the new Sportage also offers more luggage space. The model remains a five-seater - unlike the larger Sorento, which is now available with seven seats - yet it is a much more substantial offering than before.

The interior feels good too. Granted that our test cars were very well equipped with leather upholstery, satellite navigation and every other conceivable extra thrown in. The plastics used are high quality in the areas that matter and as is usual with Kia these days you get a fair amount of equipment as standard, so you should at least expect air conditioning, Bluetooth phone preparation and somewhere to put your iPod.

As we mentioned, items that will be standard will include 16-inch alloy wheels, manual air conditioning, auxiliary and USB input for mp3 players and, in terms of safety kit, there are six airbags, ESP (Electronic Stability Programme) as well as HAC (Hillstart Assist Control), DBC (Downhill Brake Control) and an ESS (Emergency Stop Signal) system. HAC prevents slip-back during stop-start driving up inclines, while DBC ensures safer travel down the steepest slopes by maintaining a steady eight km/h speed. ESS automatically 'flashes' the brake lights whenever the driver has to make a sudden or abrupt stop.

It is unclear just yet what specifications will be offered here, but you can expect there to be two trim levels. There are lots of optional extras available, such as built-in satellite navigation, xenon lights, full leather seat upholstery and a rear reversing camera. There will be various alloy wheel upgrades available too.

The Sportage that we will get in Ireland initially will be the 2.0-litre diesel version in both two- and four-wheel drive. This comes with 136hp and 319Nm of torque and is available with either manual or automatic transmission. We tried the manual version with two-wheel drive on a variety of roads, both smooth and straight and twisty and pitted. The results were pretty mixed too. On smooth straight tarmac the Sportage is pretty comfortable, but when the roads got twisty and the surfaces more challenging the results weren't so good.

We were disappointed by the lack of feel from the steering and through very tight corners there was no real assurance of grip, with the rear end feeling a little skittish. This is not something that will worry the majority of users who won't push this car too hard, but it certainly lacks the handling finesse of something like a Ford Kuga, or the forthcoming MINI Countryman. Having said that, the diesel engine is a good one and the six-speed manual transmission is smooth enough. We will wait and see what final models are like in Irish surroundings before we pass ultimate judgement, but we were a little disappointed.

The 1.7-litre diesel model is likely to be the biggest selling version in Ireland and that will come with stop/start technology and will have band B emissions too, with annual road tax of just €156. October sees the arrival of the 2.0-litre diesel versions, with the 1.7-litre diesel arriving in time for January in two-wheel drive only. Kia has not yet released prices, but if we compare it to something like the Hyundai ix35, a natural rival, then expect it to be in and around €27,000.

The new Kia Sportage is a handsome car and a big improvement both in terms of look and feel over the car it replaces. We were a little let down by the ride and handling of our test cars, but you can be sure that this will be a well priced package when it goes on sale in October.