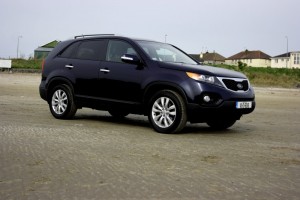 Kia's Sorento steps up its game yet still offers great value and now, seven seats too.

Weather like the kind we have been enduring recently makes the Kia Sorento all the more desirable.

The last Kia Sorento gained a very loyal following in the Celtic Tiger years when lots of us decided that being low to the ground, was, well - beneath us. SUV sales soared and Kia was one of the main beneficiaries with its Sorento. While never massively refined, it was good value, generously equipped and very useful if you wanted to venture off-road or tow a horsebox.

In 2007 Kia sold twice as many Sorentos as it did Picantos. The reality, too, was that few in 2007 really worried about the price of the road tax on the window.

Fast forward to 2010. On the way there has been an emissions-based road tax system, as well as the small matter of a global economic crisis. Now, Kia sells seven times the number of Picantos as Sorentos.

So what of this new one then? Well it looks brilliant for a start. Apart from that impressive front grille, which looks way more upmarket than before, the Sorento is longer and lower than the old model. Inside, it is more spacious and much more luxurious. Gone is the slightly utilitarian interior to be replaced by something you might find in a luxury saloon.

A new feature in the Sorento is an extra row of seats, making this a full seven-seater.

A new 2.2-litre diesel engine is the only offering and it is smooth, refined and has oceans of torque. It doesn't feel massively potent but the performance figures for what are quite a sizeable SUV really aren't bad. Our car was a two-wheel drive version and it was fitted with a six-speed manual transmission. Personally, if I was having a Sorento I'd want it with an automatic transmission and four-wheel drive, but this doesn't appear to be offered in Ireland as yet.

You can have four-wheel drive with a manual transmission for €43,995 and a two-wheel drive with an automatic transmission for €45,495. However, aside from any horrific wintery weather you would probably cope fine with the two-wheel drive model. Plus, it has reduced emissions. At 171g/km it goes painfully close to being a Band D car, but sadly jumps into Band E, though €630 is still a relatively affordable price to pay per year for road tax on a large SUV.

The fact that our Sorento was front-wheel drive meant that there was plenty of torque steer in evidence as the car tried to put down all the engines's output; however, we were really very impressed with the ride comfort and while most of these type of vehicles tend to wade and wallow through corners, the Sorento showed little  evidence of this and felt quite balanced overall.

This is a very strong area for the Sorento, because you are getting a large SUV for the price of some more compact models. However, Kia hasn't skimped on standard equipment. Kit includes heated electric front seats, dual-zone climate control, leather trim and cruise control. Fuel economy isn't bad and road tax, as we have said, at current levels is €630 per year.

We were really very impressed by the new Sorento. Obviously this genre is really struggling in Ireland but when you look at the value on offer it can't be ignored. The fact that it is a seven-seater now makes it all the more versatile.