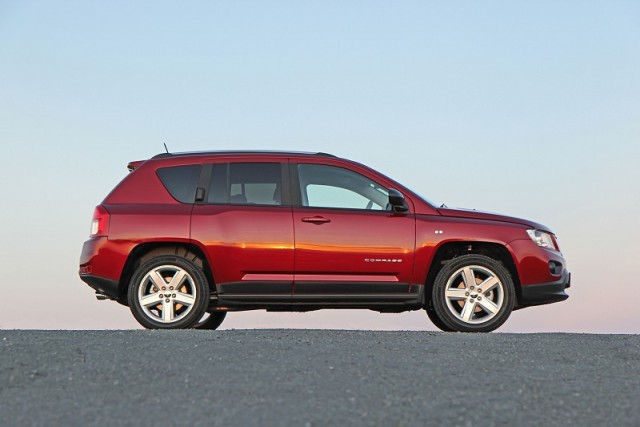 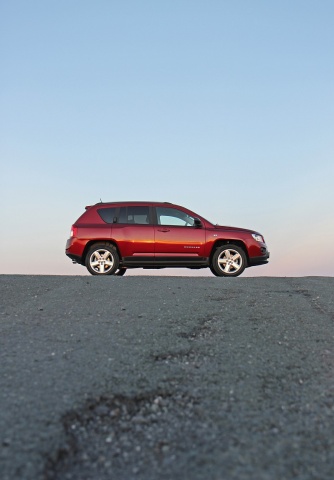 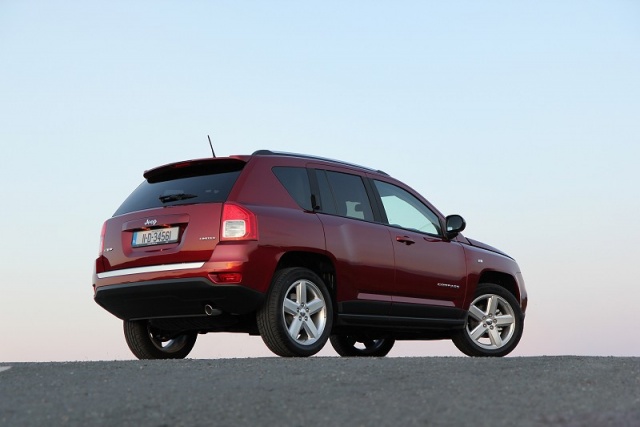 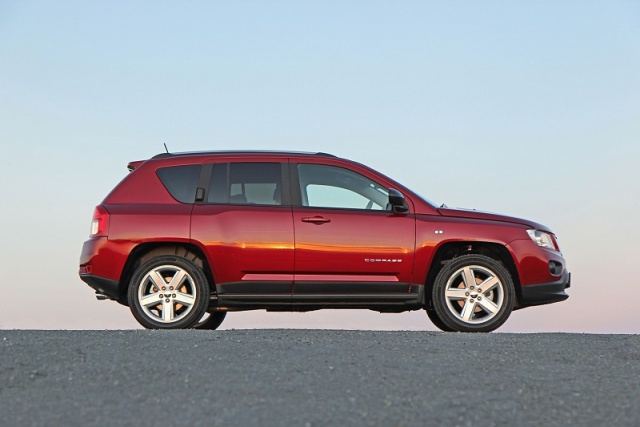 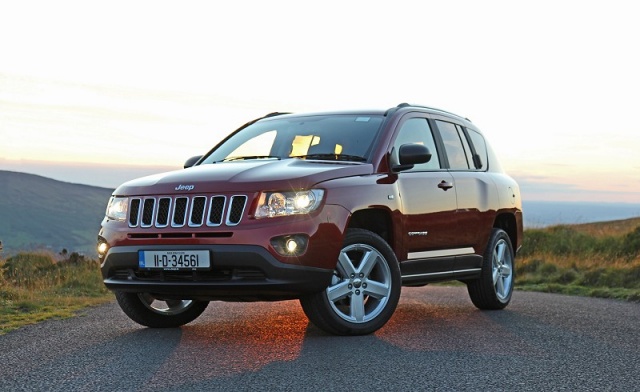 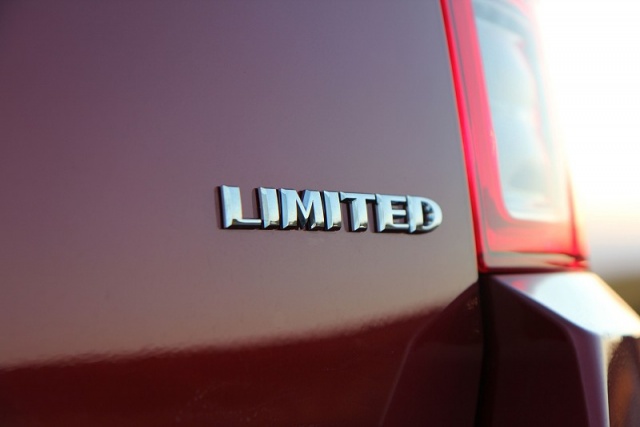 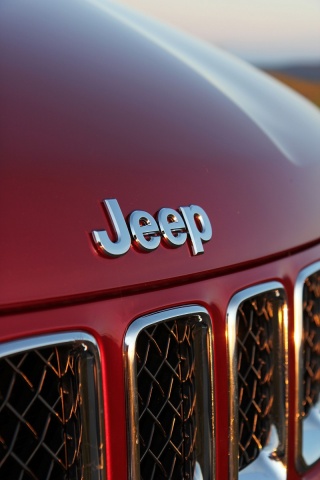 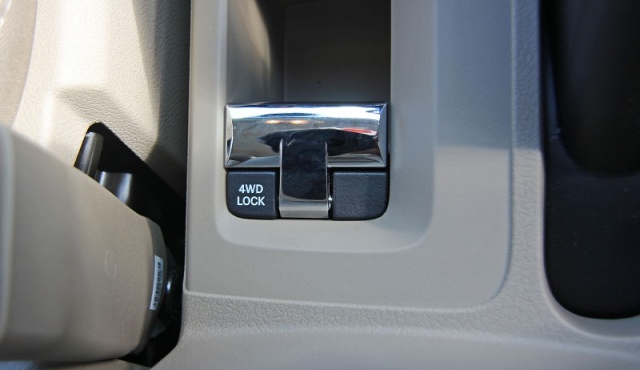 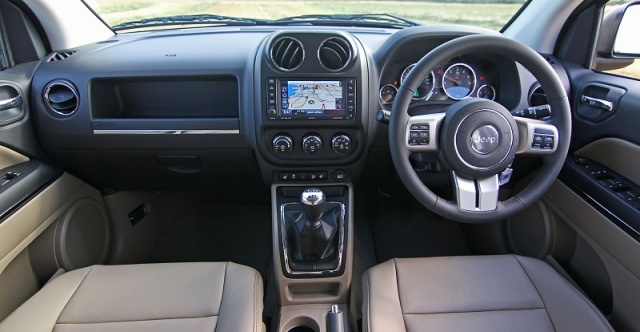 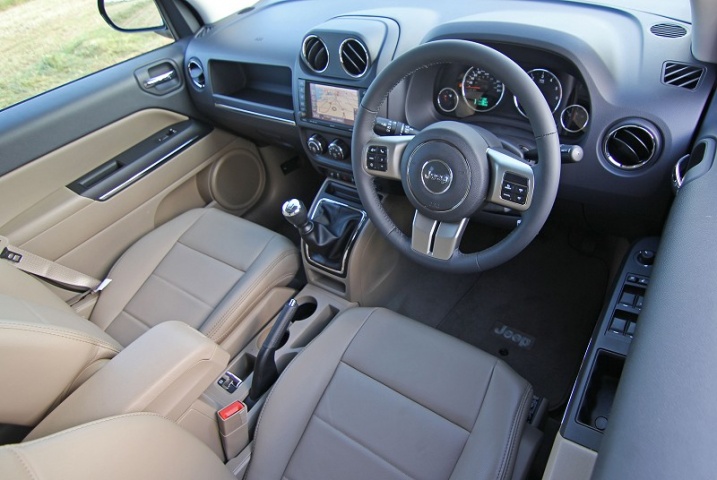 Can the Compass's chiselled looks allow it to muscle into the competitive crossover segment?

With a competitive price, more toys than Santa's sack, distinctive looks and gutsy engine the Jeep Compass comes oh-so-close to being a viable alternative to crossovers like the Volkswagen Tiguan, Ford Kuga etc. However, high emissions - and associated road tax costs - mean it's really only for true Jeep fans.

Unlike the first generation Jeep Compass, which looked like it had been designed by a seven-year old on an Etch-a-Sketch, the new car apes the looks of the bigger Grand Cherokee model. The Usual Jeep hallmarks of a seven-bar-grille, oversized fenders and slab-sided design feature. Yet despite the typically brash American looks the Compass is narrower than a Ford Focus, meaning it does not have as large a footprint as you would think.

The interior is a marked improvement over Jeeps of old, which featured plastics one step above those used to make wheelie bins. The Compass is by no means up to the standards of premium European rivals, but it is chunky, solid and appears hard wearing. A polished, Audi-esque interior would not suit the Compass however. Jeeps are meant to be rugged and - dare I say it - manly; and the large dash vents, huge grab handles and thick rimmed steering wheel suit its nature perfectly. Interior space is good with captain's chairs up front and plenty of room in the back for a full complement of adults. The oversized wheel arches do encroach into the boot space though so fitting a pram in can be a struggle.

This is unfortunately the Compass' Achilles' heel. The engine itself - a 2.2-litre Mercedes-Benz sourced unit - is a fine powerplant that offers 163hp and 320Nm - the latter from as low as 1,400rpm. While not the last word in refinement, it is gutsy, makes a decent noise under acceleration and at 6.6 litres/100km (42.8mpg) it also returns decent fuel economy. The problem is with the emissions. In an era where Band A and B cars account for the vast majority of car sales in Ireland, a vehicle that churns out 172g/km just does not make sense. That figure means the Compass languishes in Band E with an annual tax bill of €677.

Fiat (the new owners of Jeep) says its drivetrain division is working to get this figure down to a more acceptable level, but until it does the Compass will barely register on the sales charts here.

On the move the Compass is calm and civilised. Being American it is particularly adept at wafting along effortlessly. Come to a corner though and it does a very un-American thing of going around it without too much drama. The dynamics are not in the same league as the new Mazda CX-5 with minimal feel coming back through the steering wheel, but body roll is, for the most part, kept in check and only the biggest imperfections in the road will unsettle the Compass.

Both the 2.0-litre petrol and the lower priced diesel are strictly front-wheel drive but the model featured has what Jeep calls Freedom Drive I. Under normal conditions, power will only be sent to the front wheels, but should the computer detect slippage it will automatically send power to all four wheels for added traction. The ability to put the drivetrain into permanent four-wheel drive mode complete with a centre locking coupling is included, but this is more for snowy or icy road use. Despite the inclusion of four-wheel drive - and the SUV looks of the Compass - it is a soft-roader rather than a mud-plugger.

The Compass range starts at €30,595 for the 2.0-litre petrol model rising to €35,595 for the four-wheel drive diesel. The mid-range car, with a price of €33,595, would be the volume seller if it wasn't for the high tax costs across the Compass range. This is a shame as, for the money, the Compass is very well equipped against its competitors. Standard equipment includes 18-inch alloys, heated leather seats, air conditioning, a multi-function steering wheel, cruise control, hill start assist and a 6 CD/DVD player with auxiliary and Bluetooth connectivity. Our test car was fitted with the optional touch-screen navigation system that includes a 30GB hard drive and a nine-speaker stereo system including swing down boot speakers for when you are having a party at the beach...