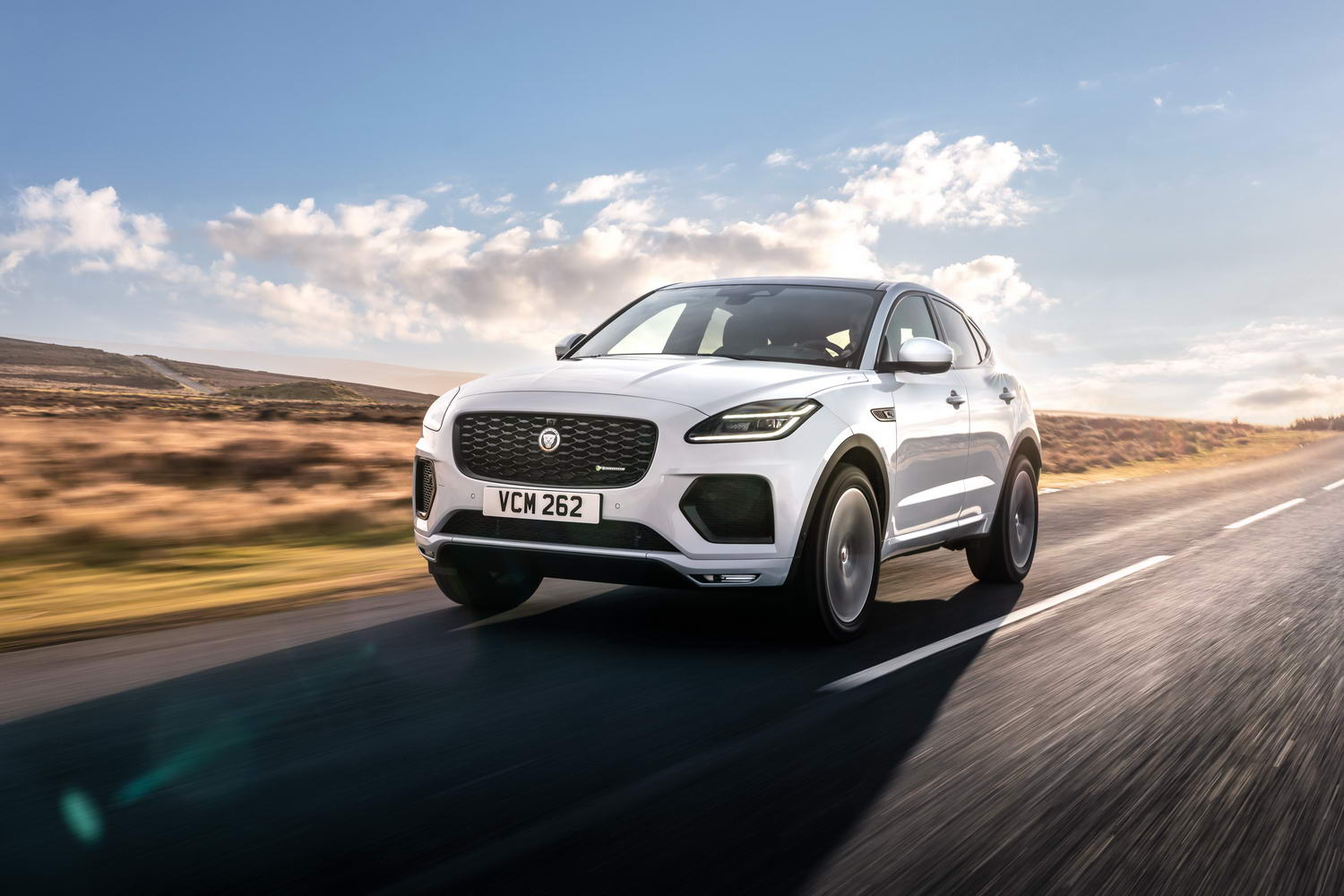 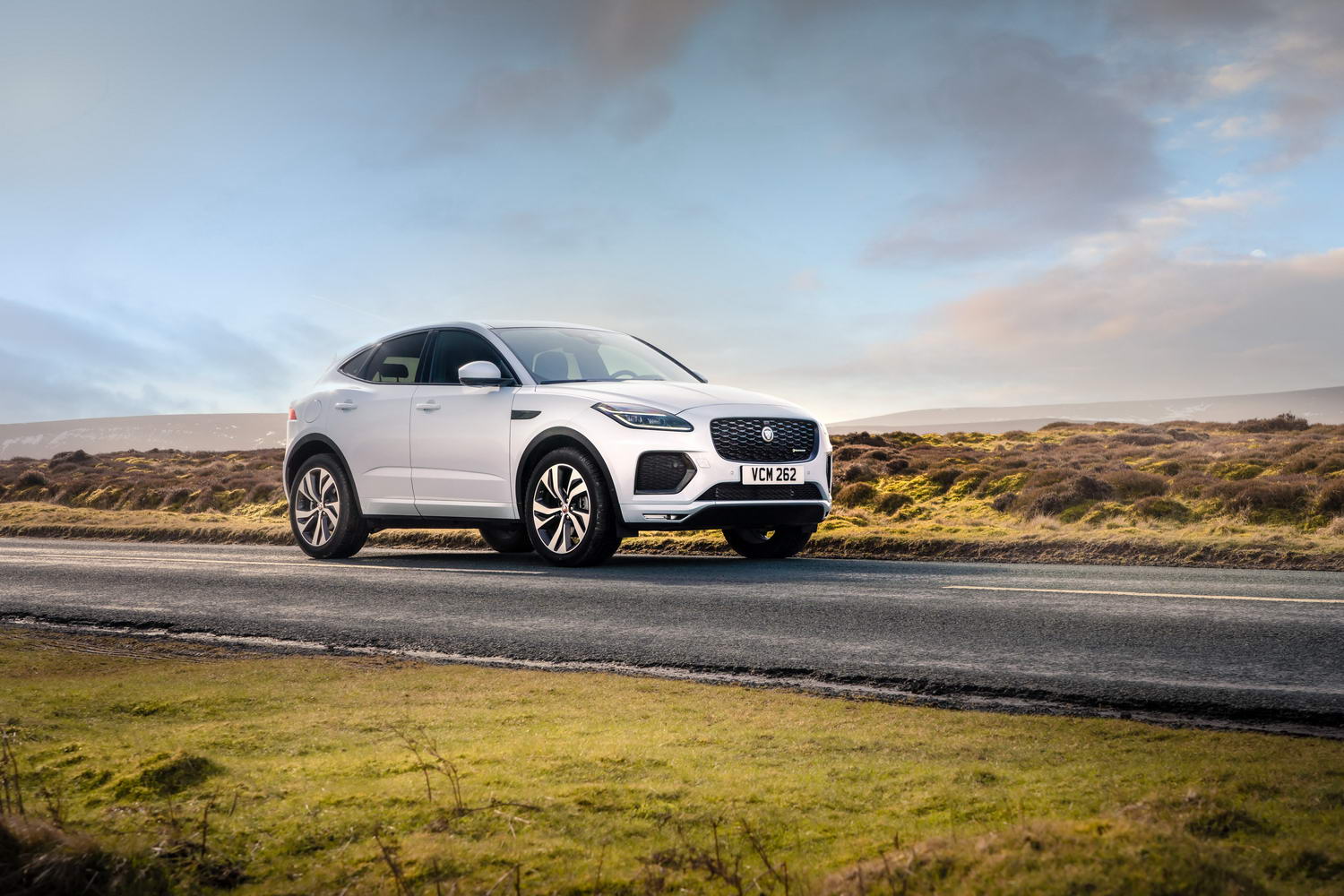 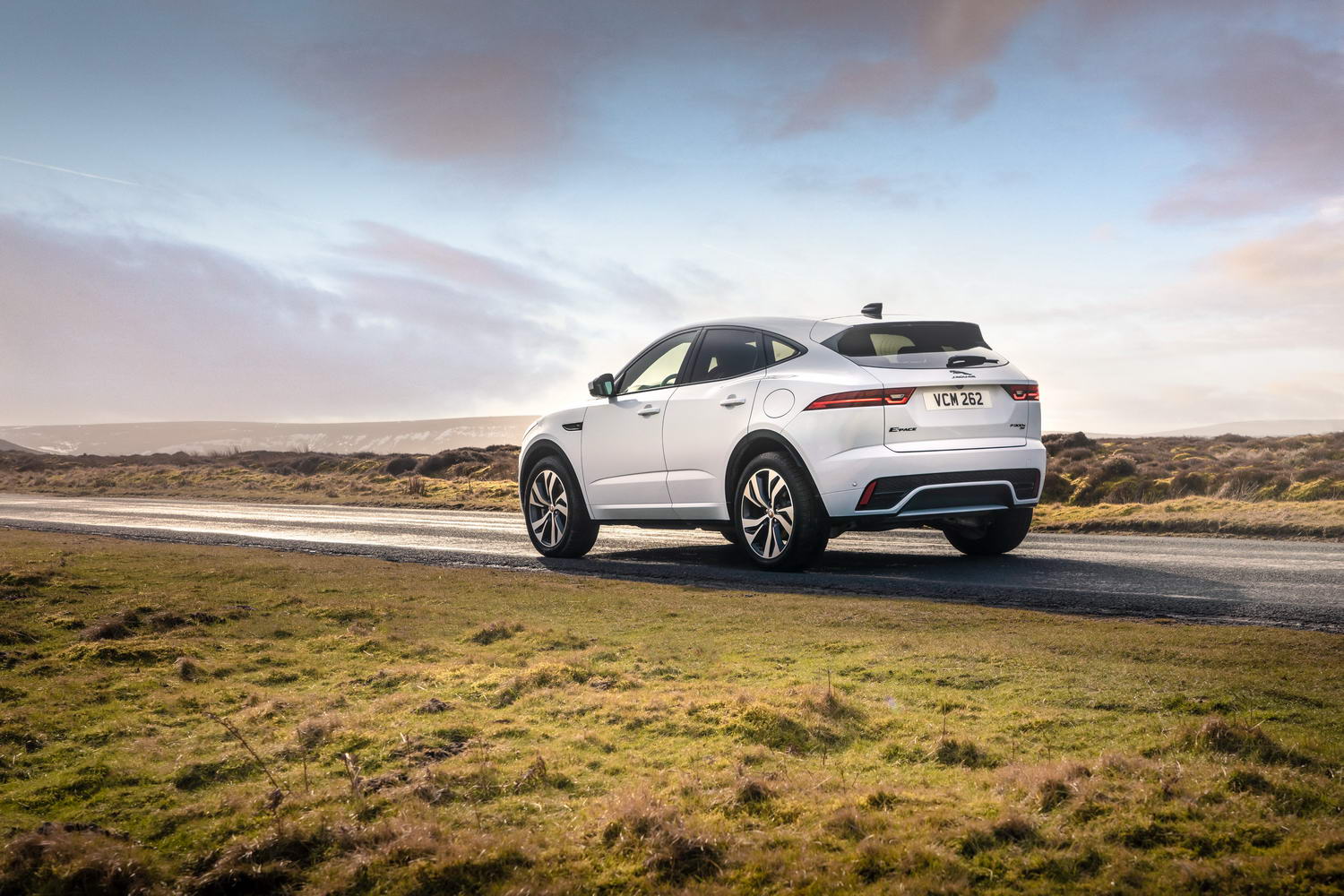 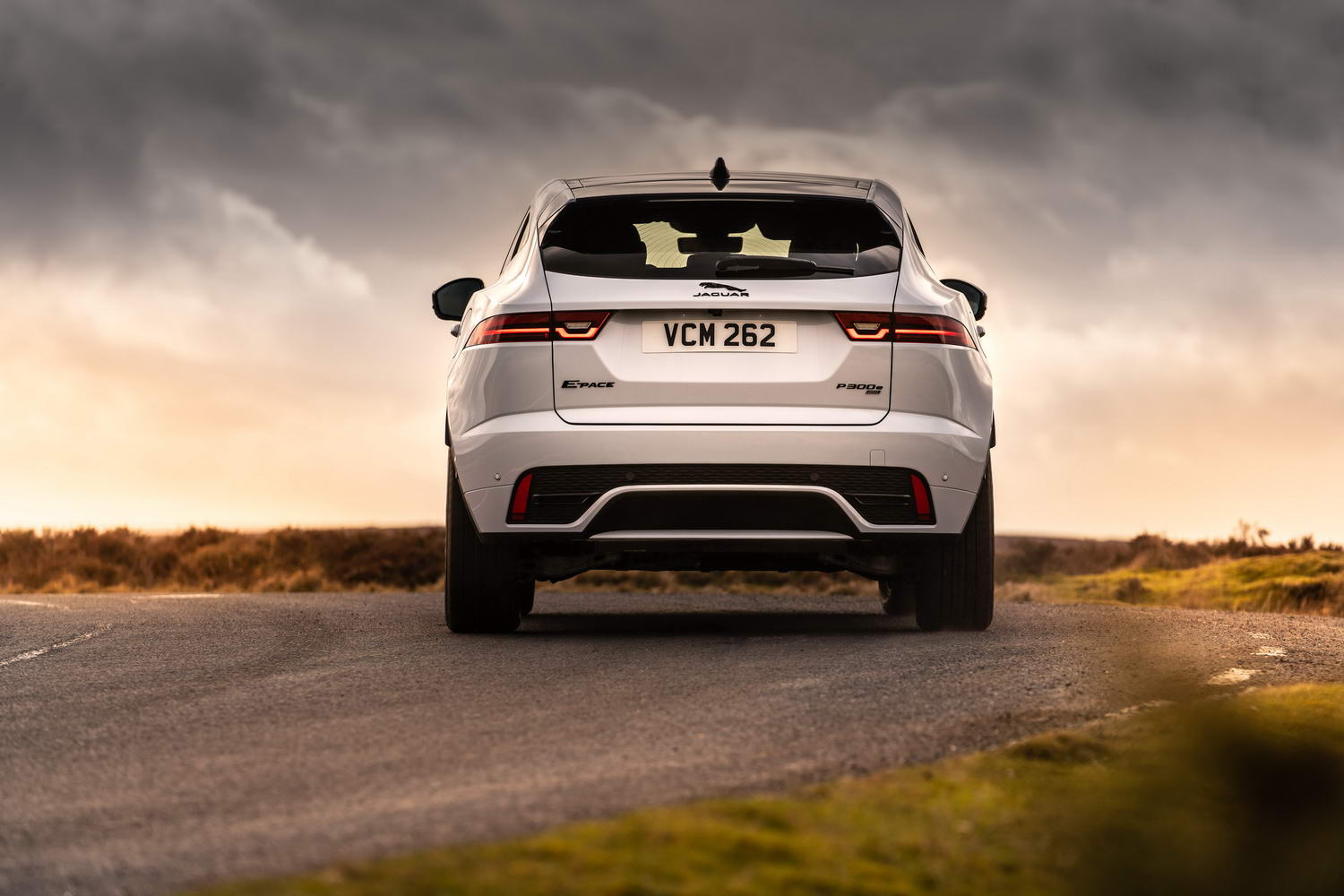 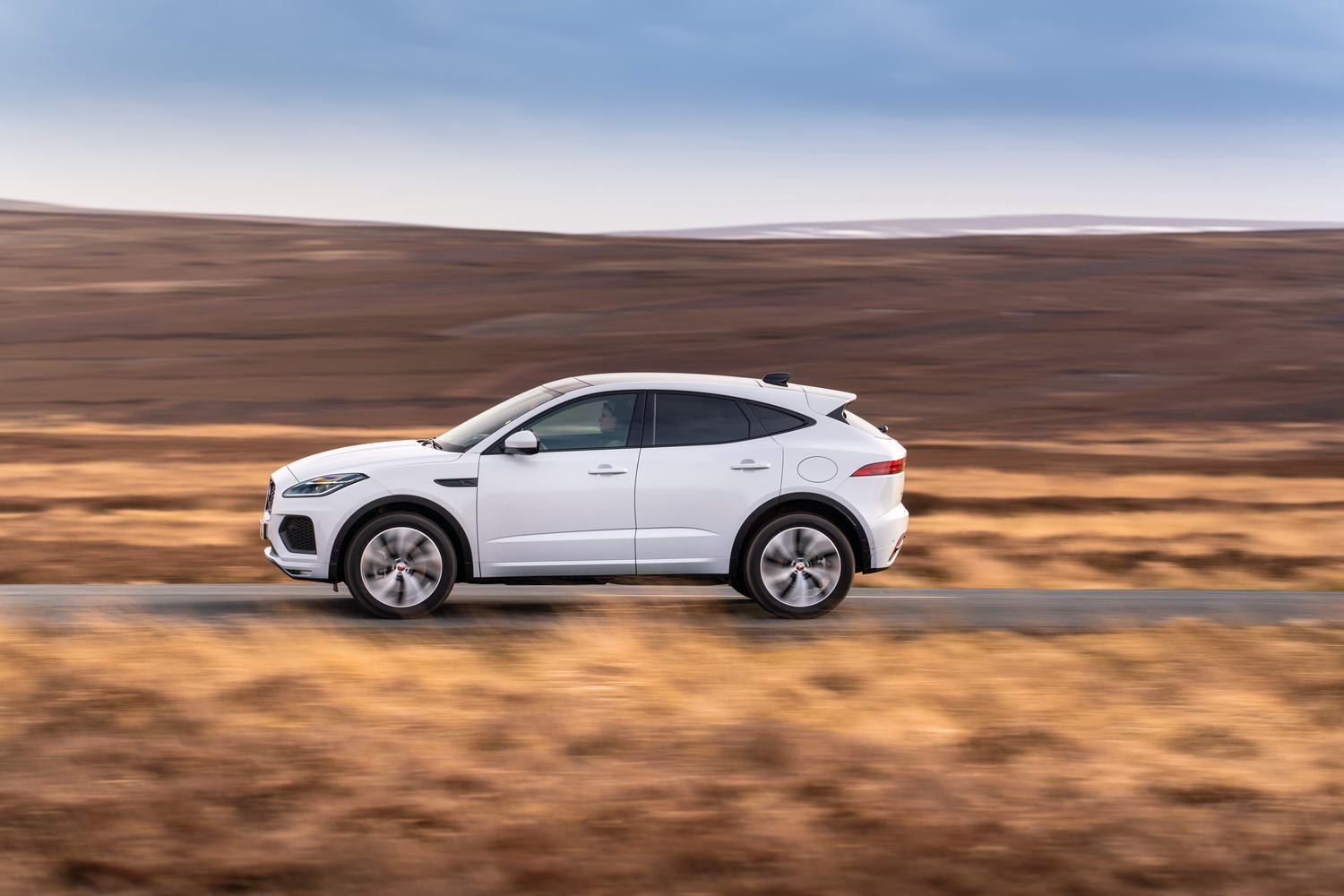 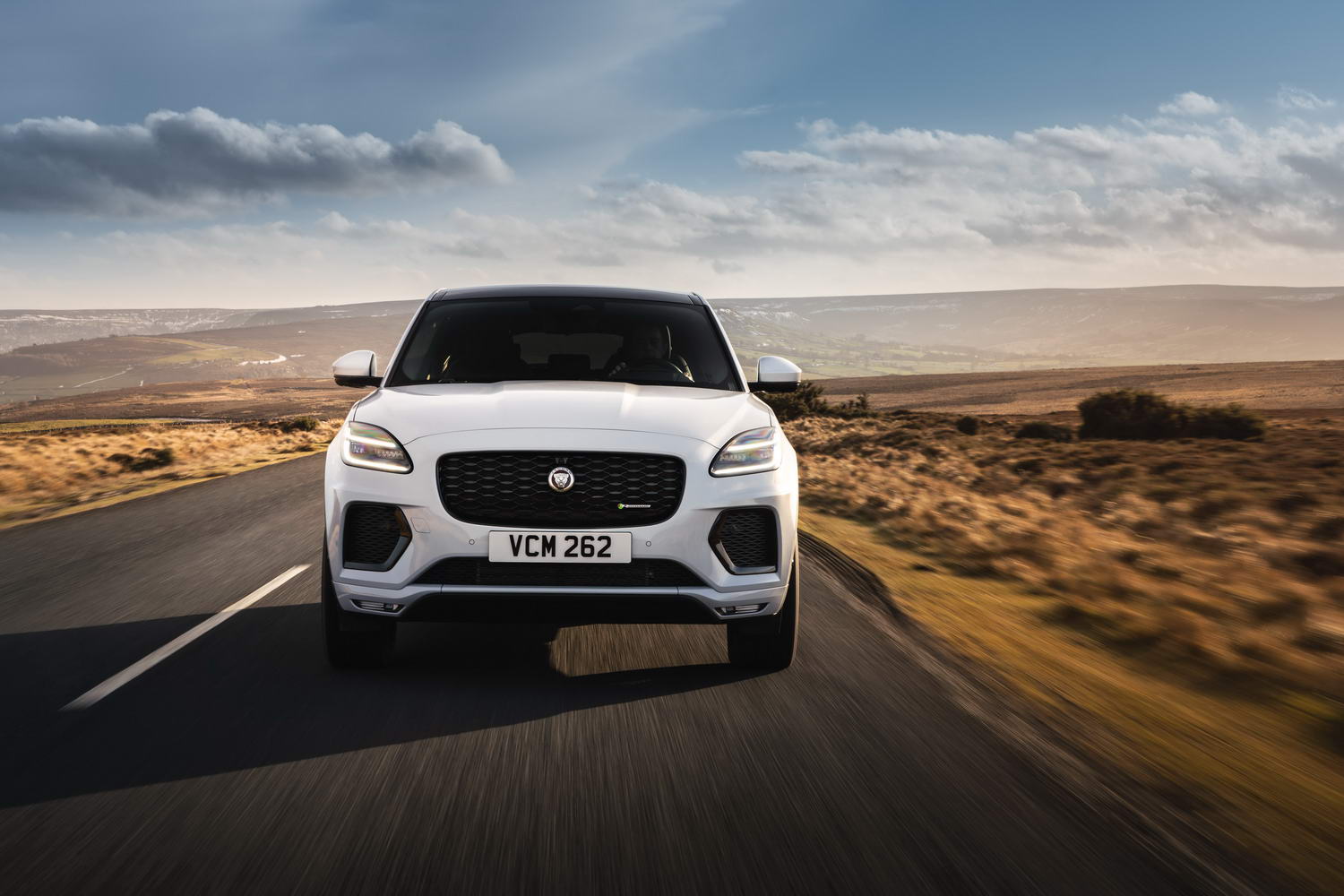 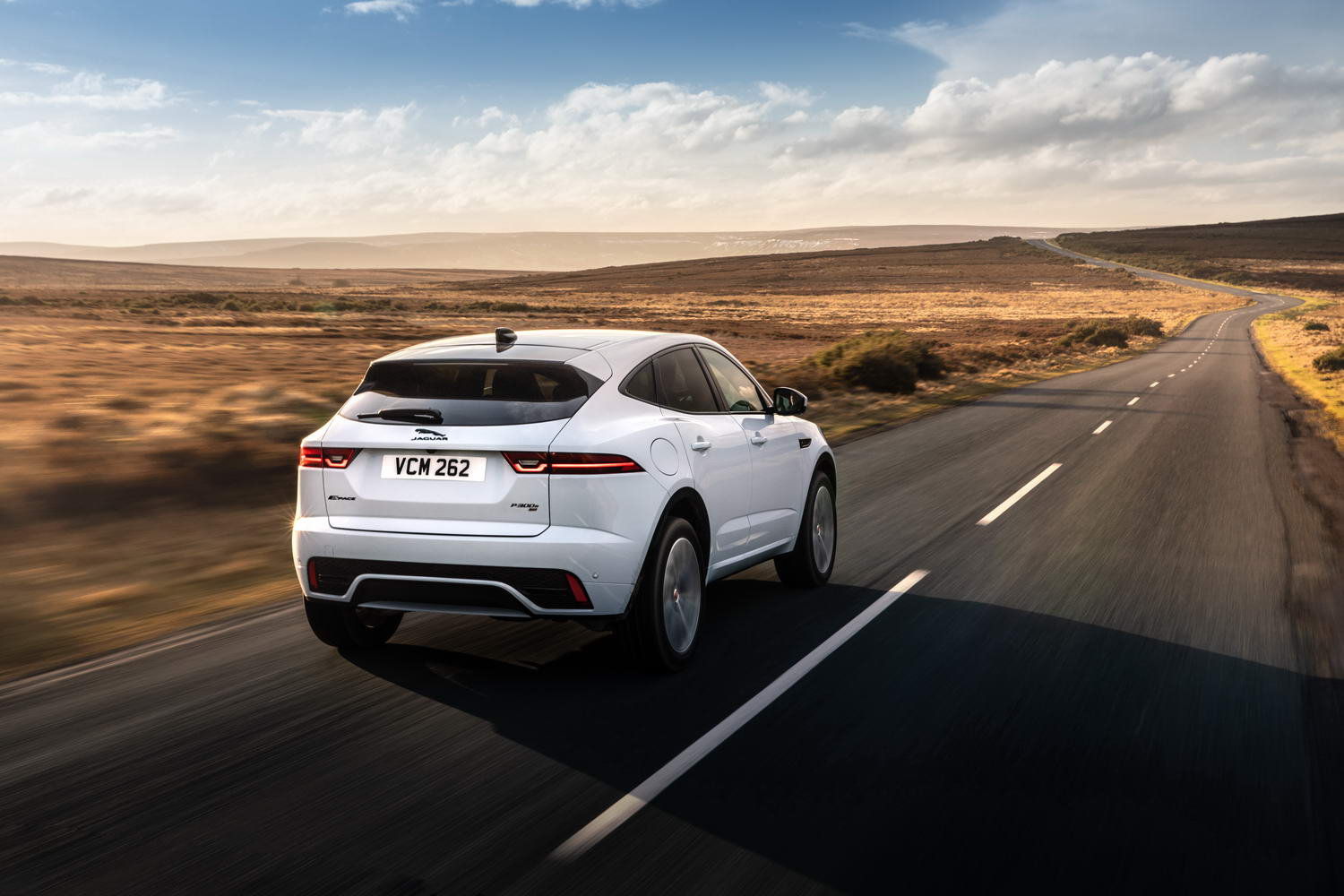 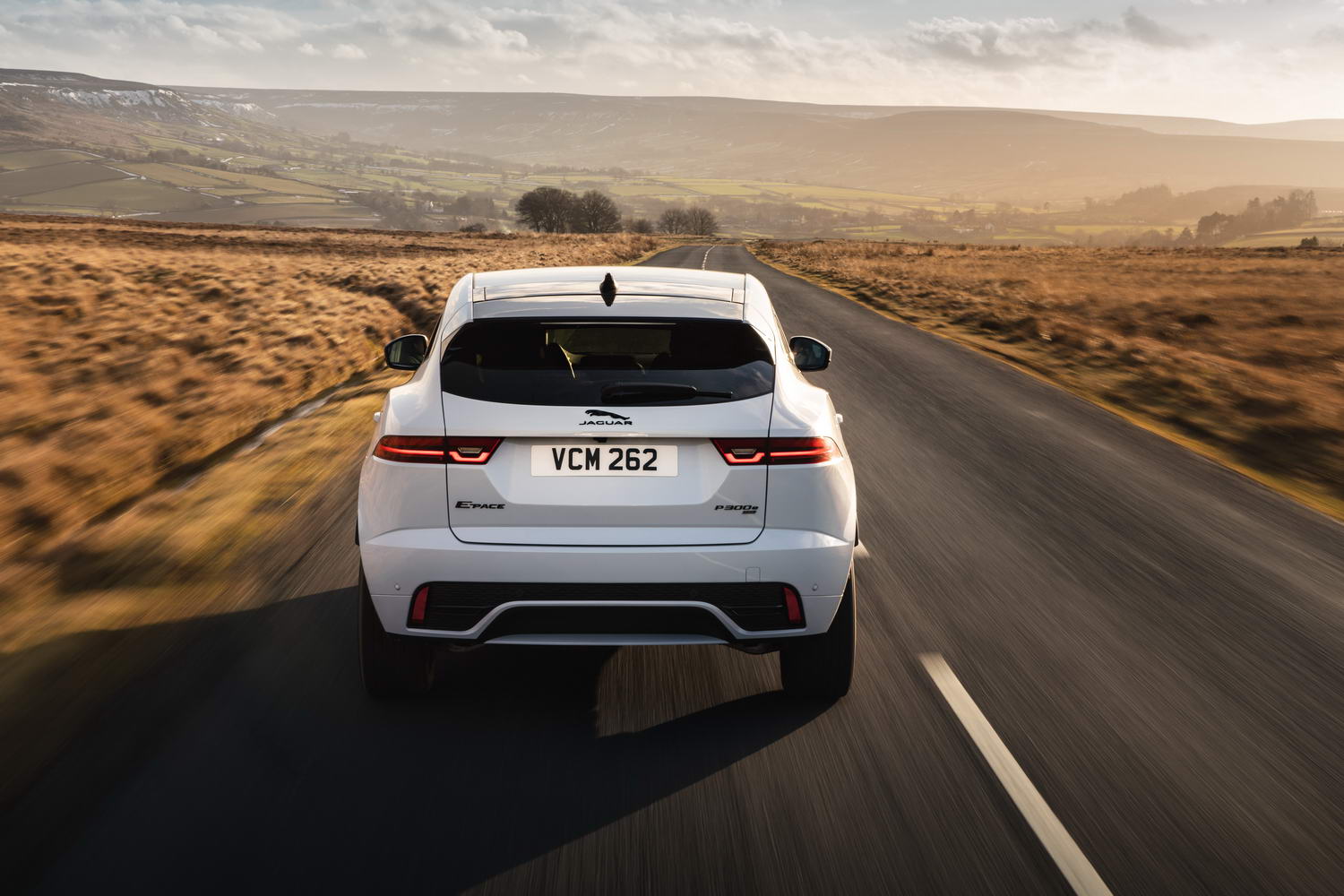 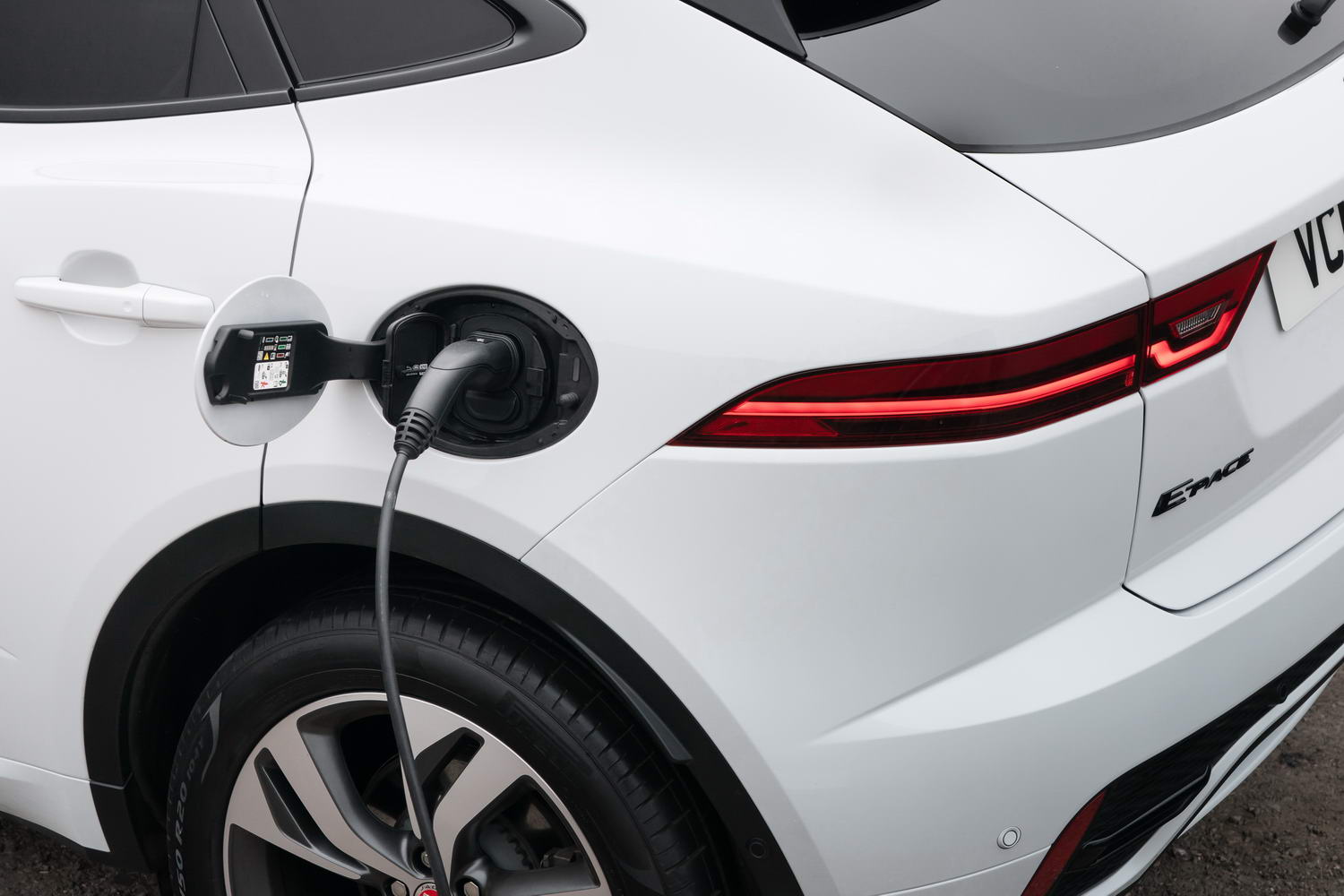 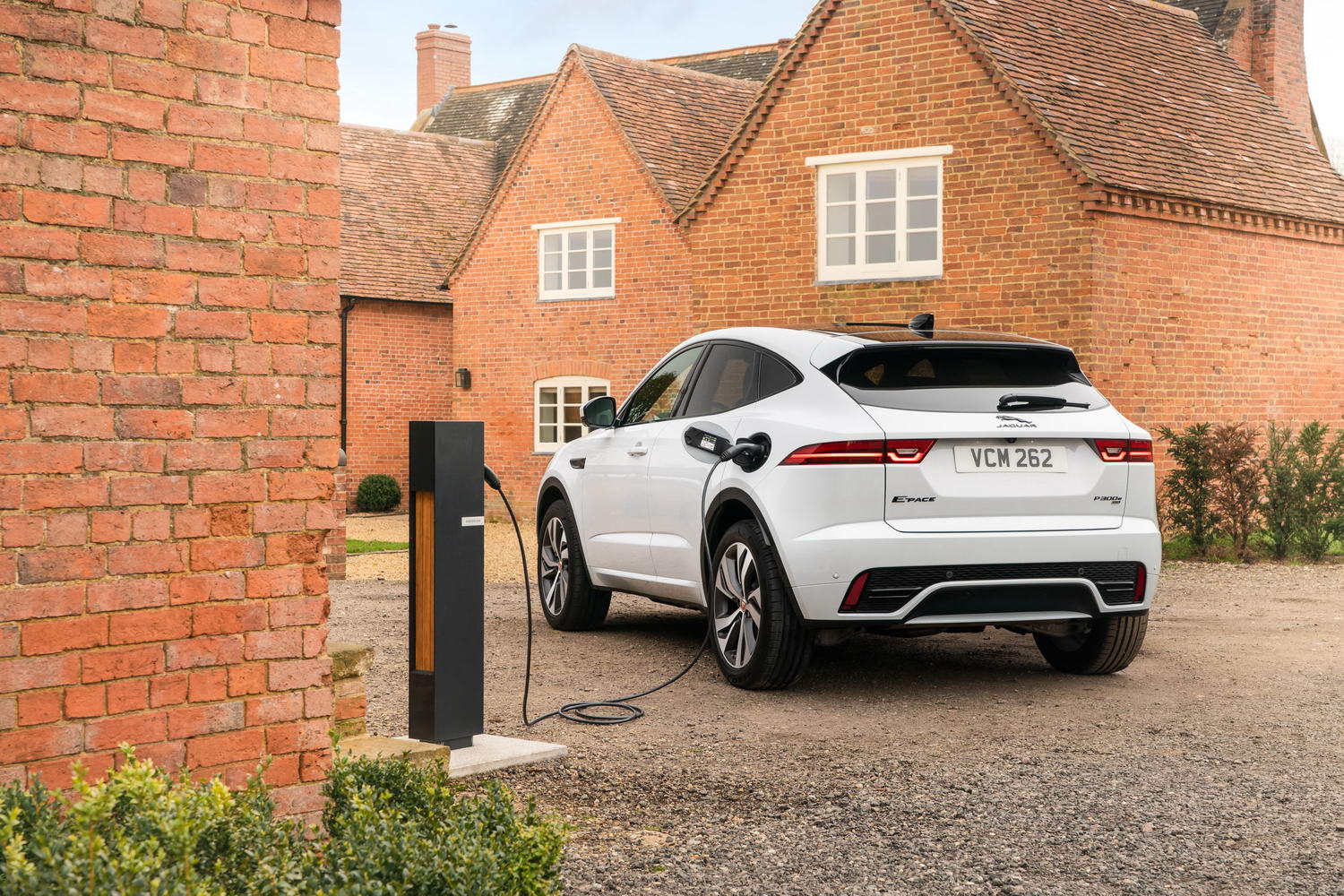 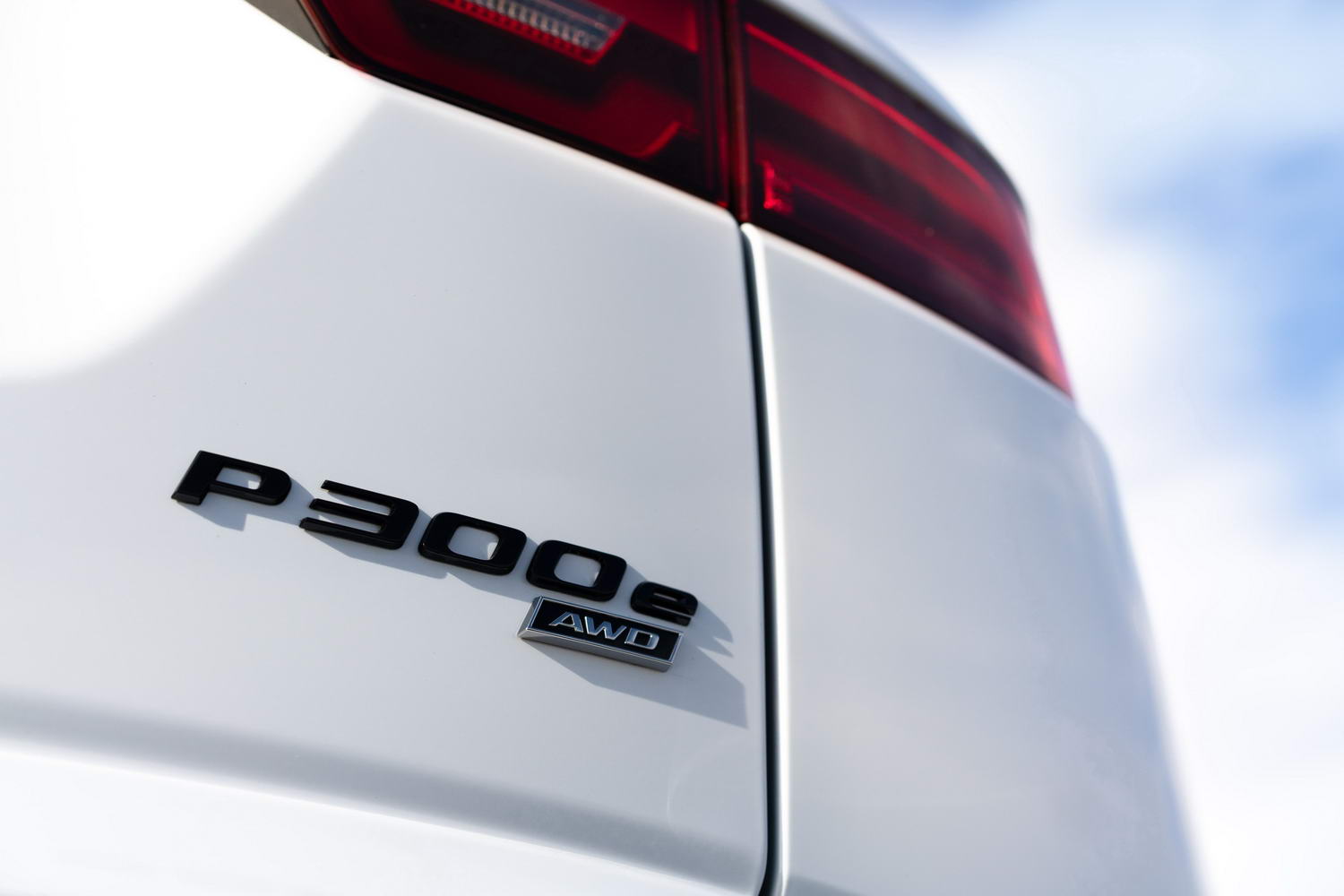 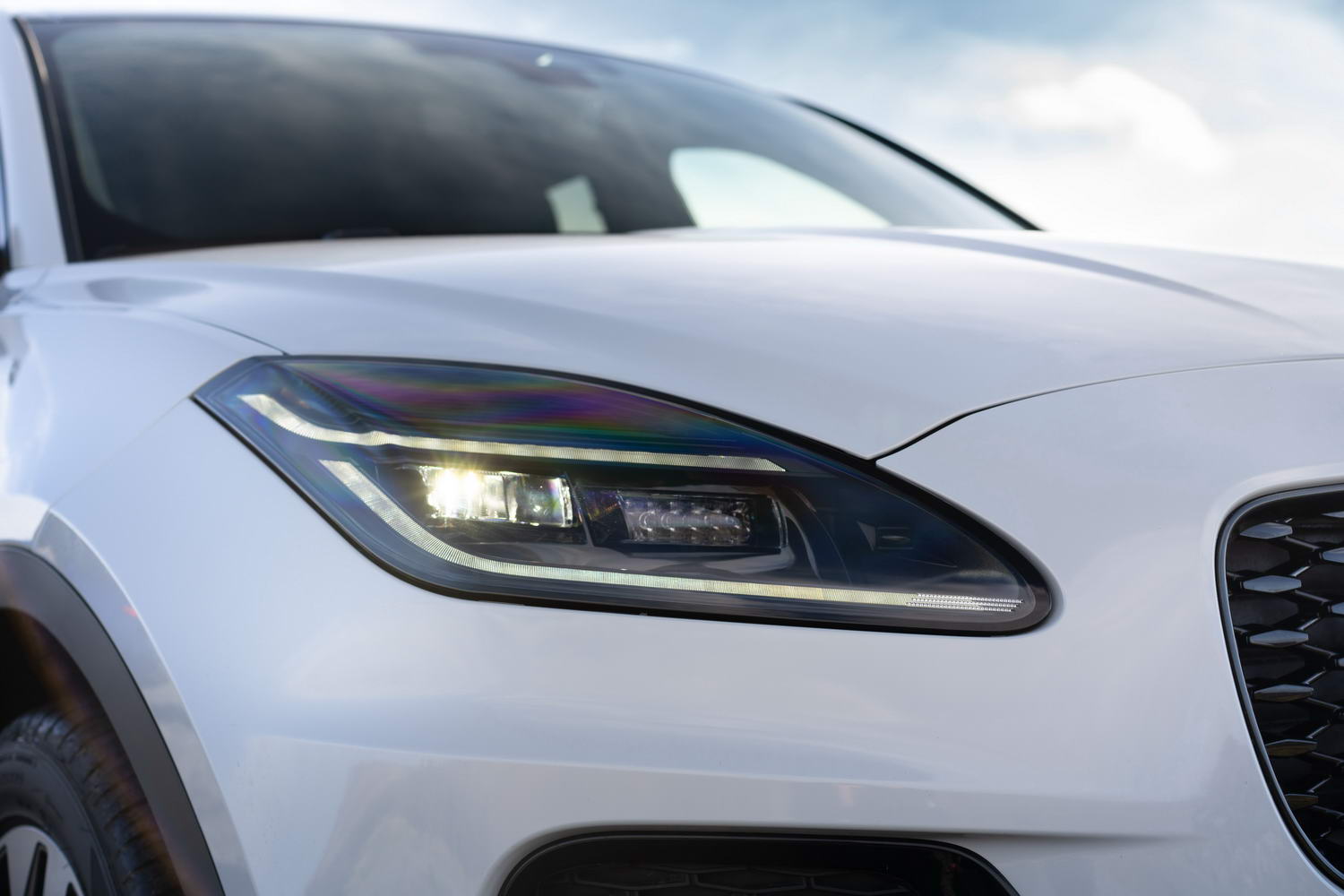 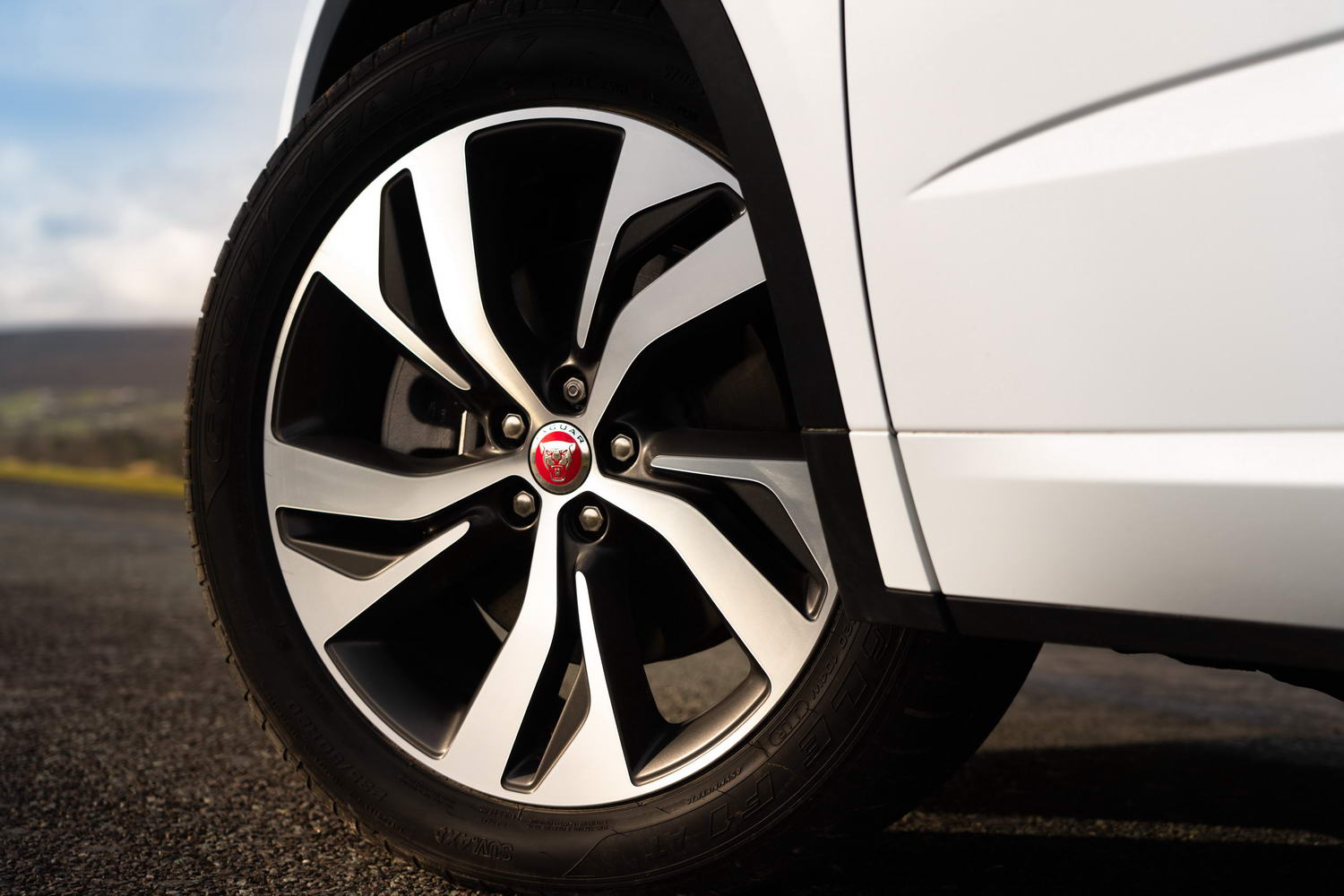 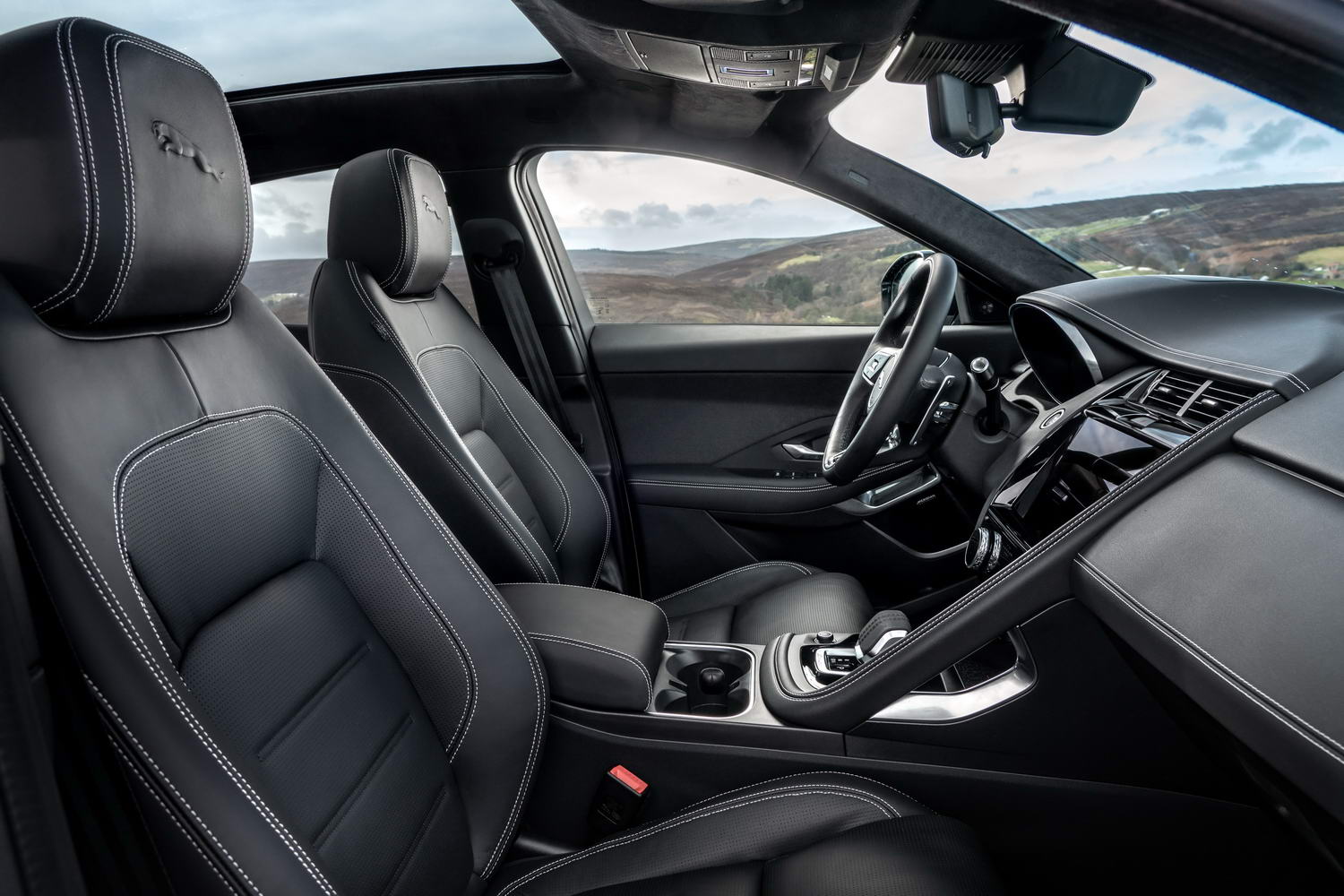 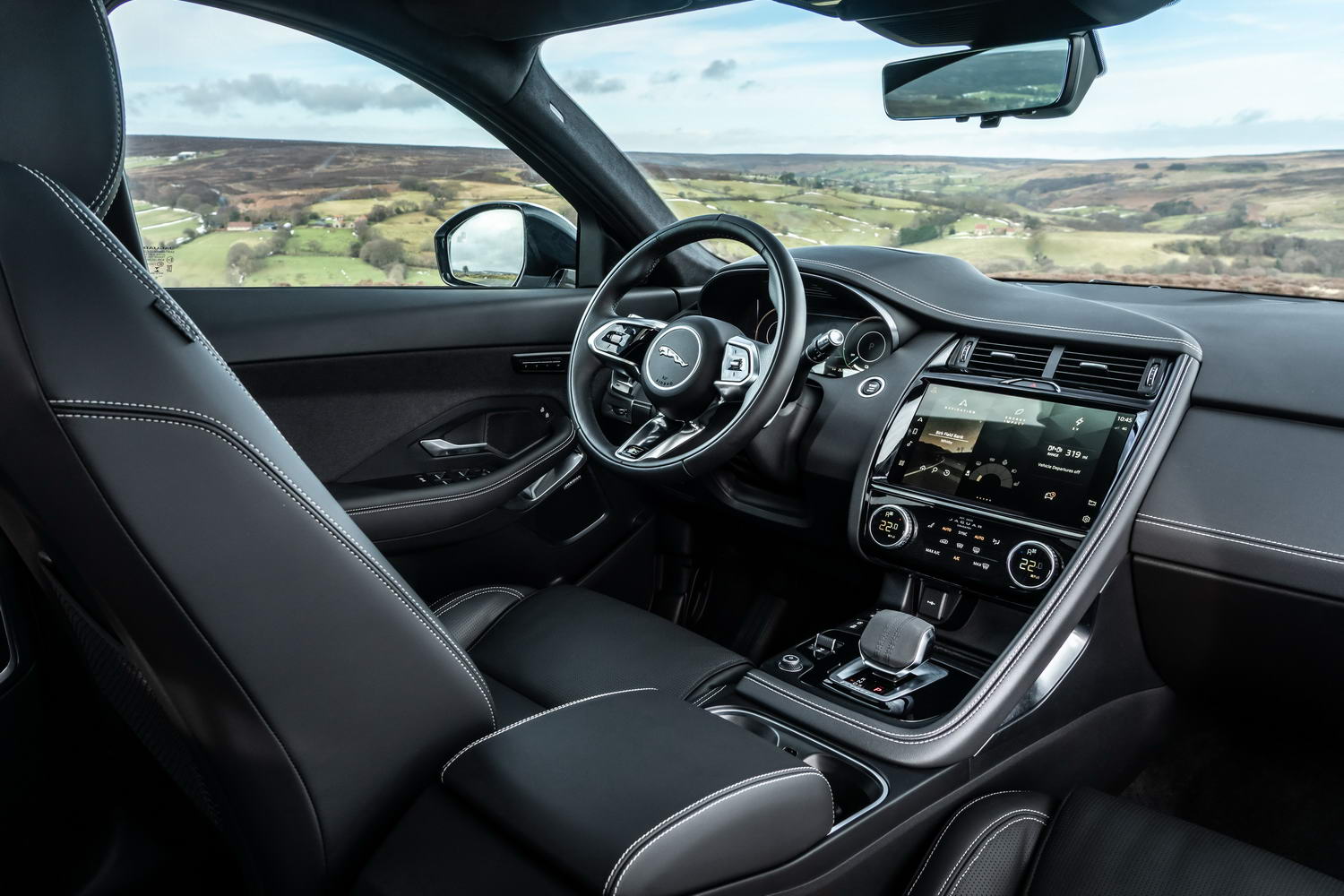 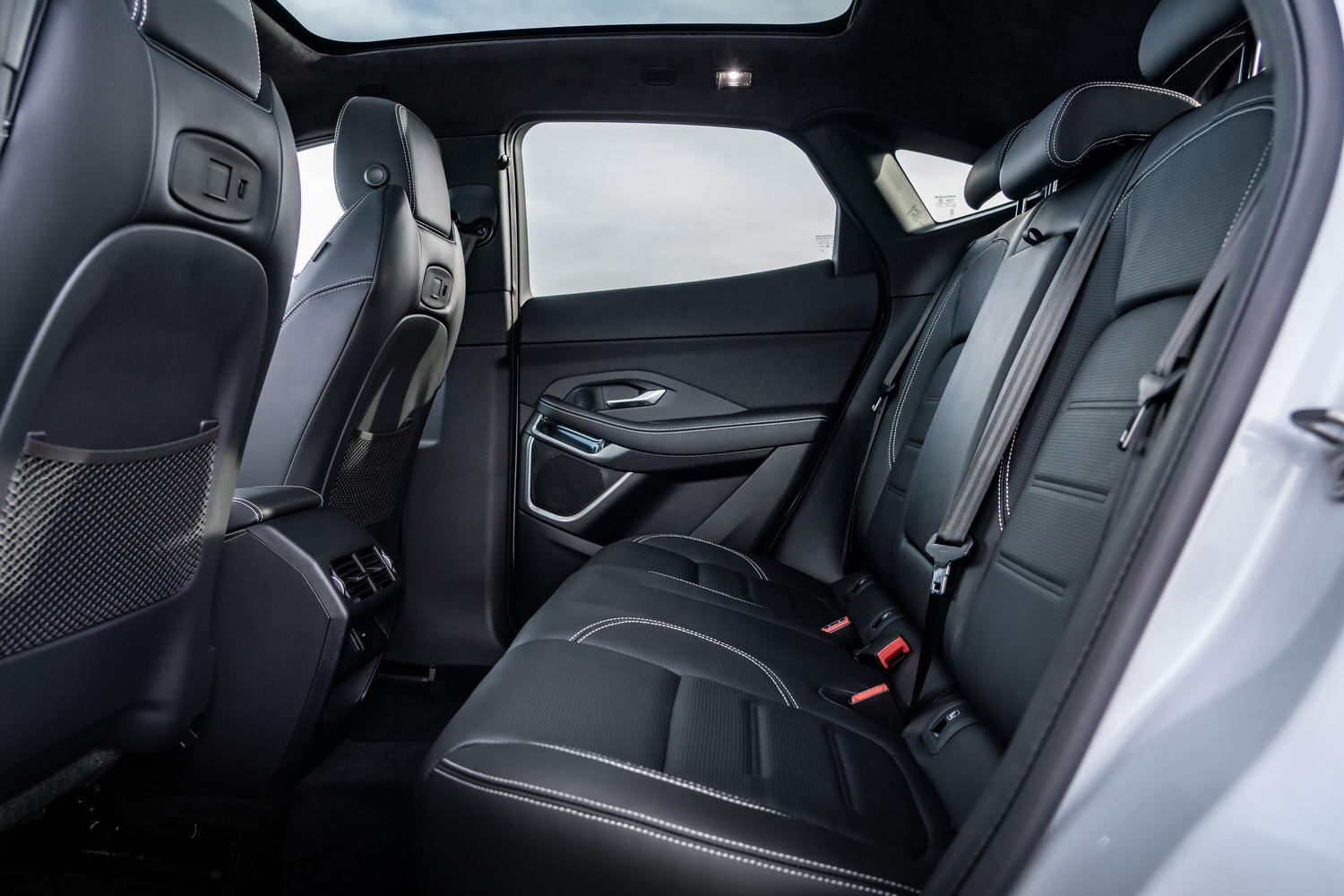 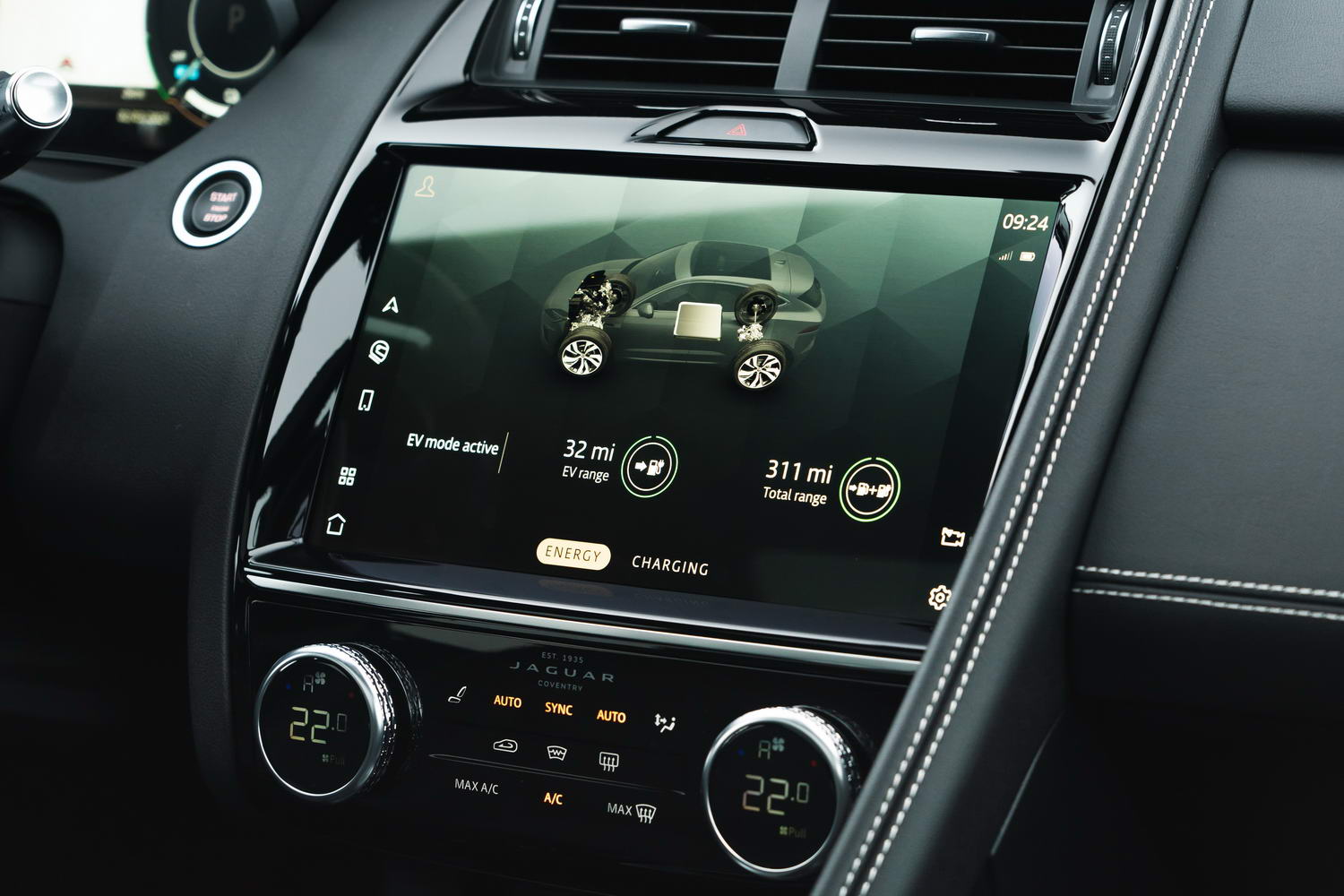 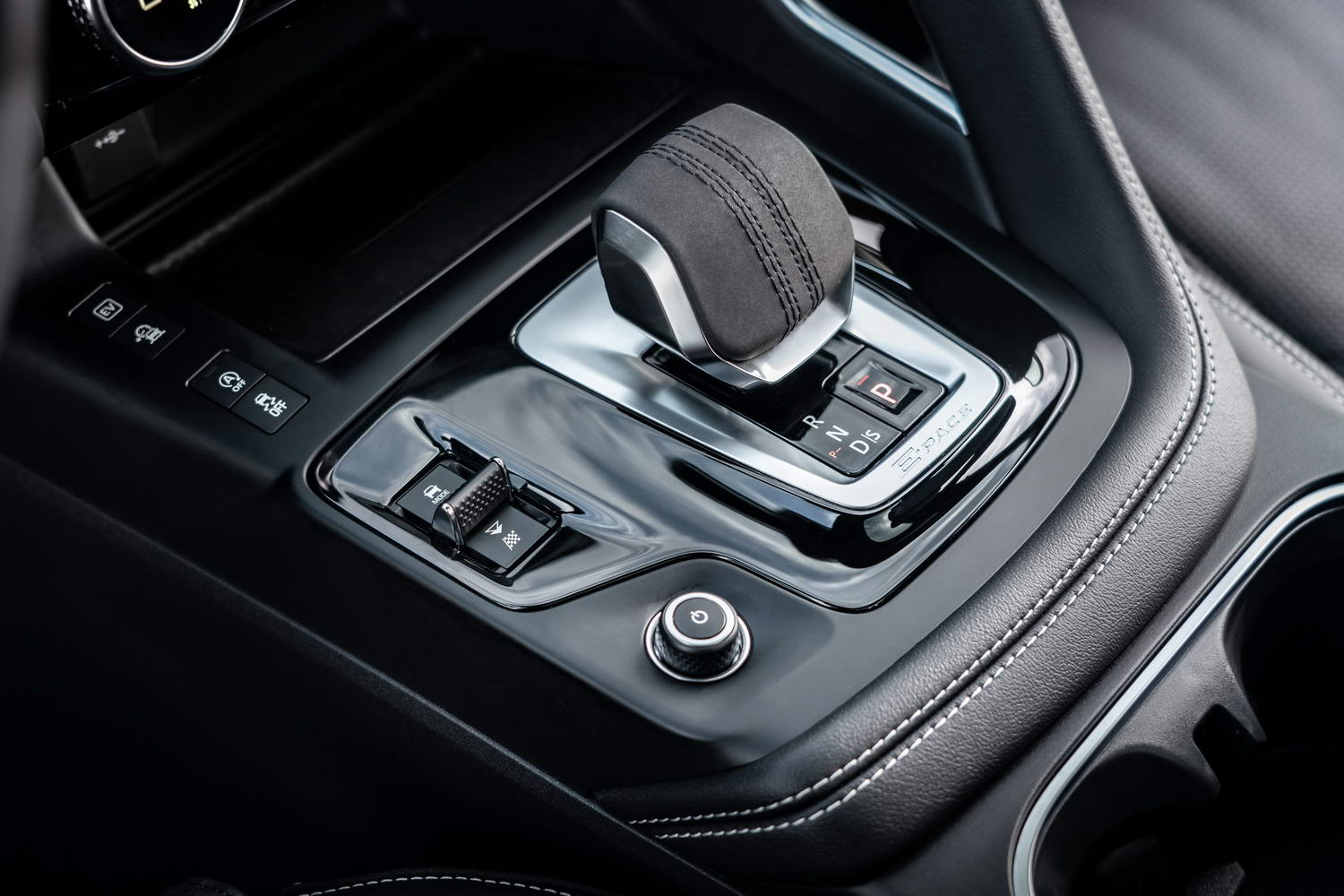 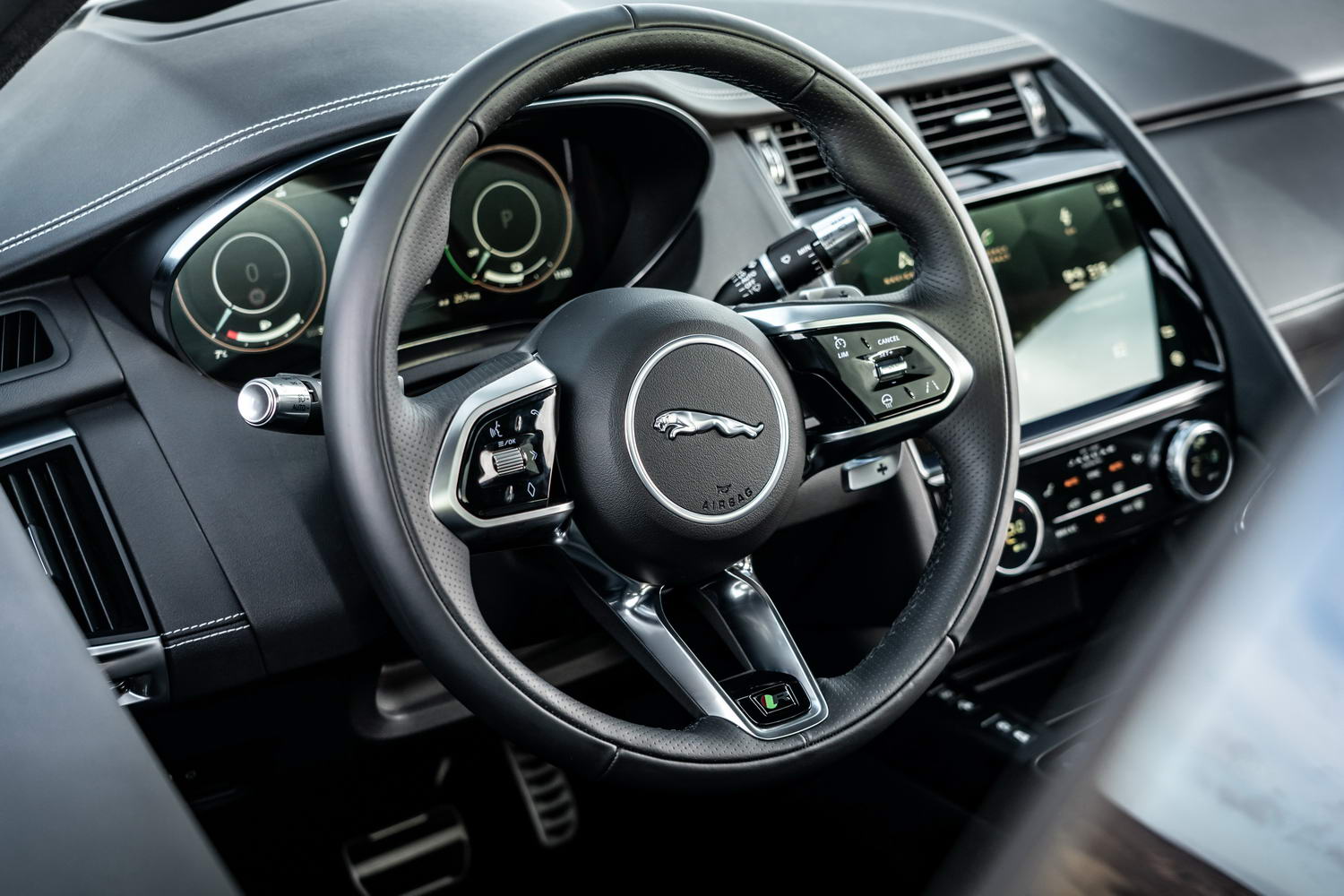 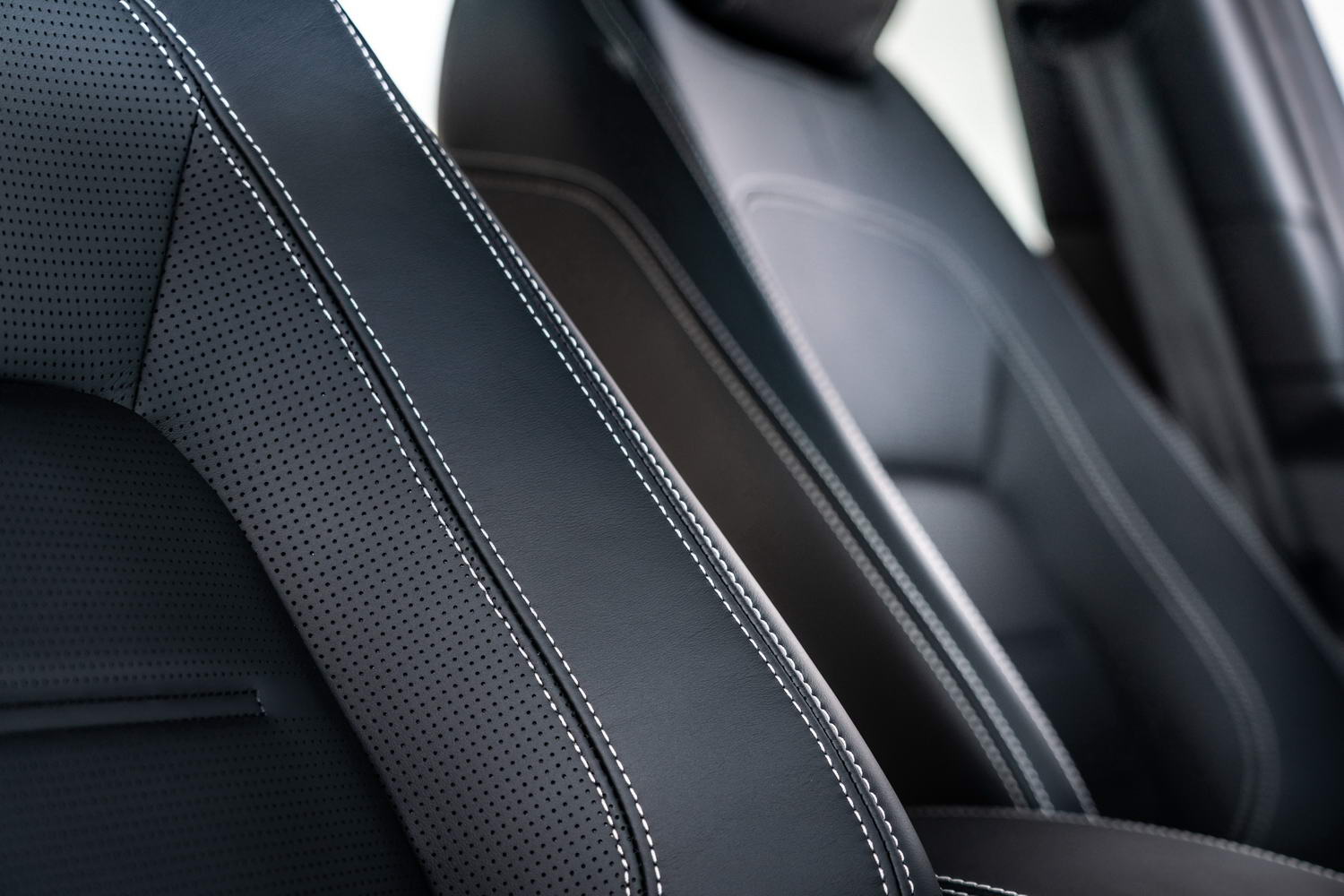 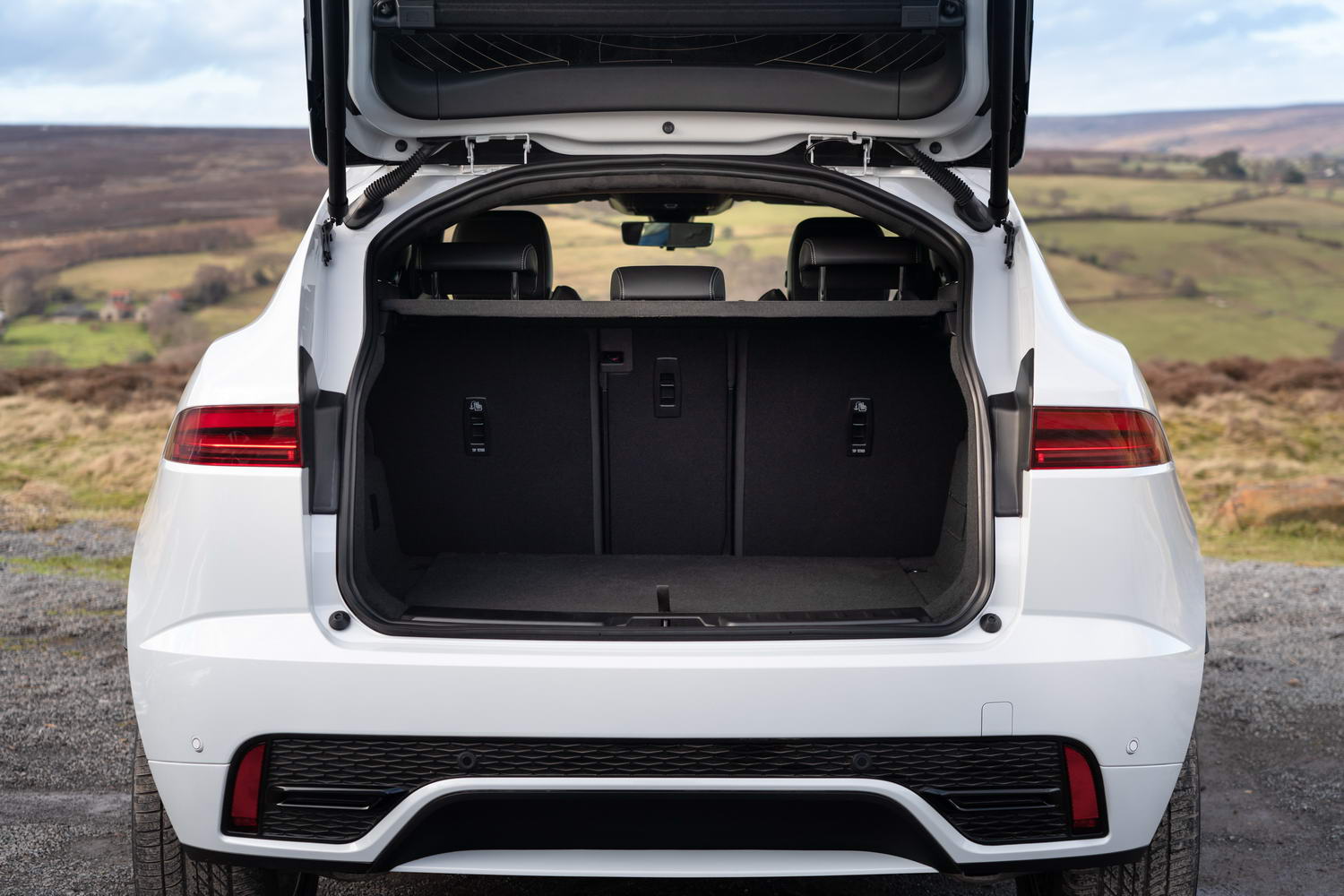 Jaguar makes another step towards the total electrification of its product line-up by 2025 by blessing the revised E-Pace line-up with a petrol-electric plug-in hybrid flagship model. The good news is that the P300e is an excellent execution of this propulsion format.

While the Jaguar E-Pace has, to our eyes, never been quite as good-looking as its F-Pace big brother, the design of the company's smallest SUV is starting to come into its own and some subtle midlife updates have tidied it up even further. Most of the revision work is at the front of the 2021 model year SUV, although at the back there's a new mesh insert in the lower bumper that features twin tailpipes on the four-cylinder petrol models, or slim horizontal blade finishers on the other variants, including this P300e. And there are also LED taillamp clusters with the 'chicane' graphic in them, these units referencing the I-Pace EV.

At the nose of the E-Pace, the whole lower bumper and airdam arrangement has been redesigned on all models, with R-Dynamic vehicles like this one (running R-Dynamic S, SE and then HSE, this sporty guise is the only spec you can choose for the P300e in Ireland, by the way) losing the blade detail of the regular cars for larger intake apertures with a mesh-finish insert. Above this, there's a new style of radiator grille and LED lamp clusters with a distinctive 'stacked-double-J' daytime-running lamp signature within them. A Black Exterior Pack can also be fitted to clothe various exterior details in gloss black, which works well against a bright or white body, and we'd go so far as to say that while the E-Pace is still not as appealing to look at as competition such as the Volvo XC40 or even the Lexus UX, it's a lot more comfortable in its skin than it was prior to the facelift.

Inside, a big improvement is brought about by the introduction of Jaguar's latest Pivi Pro 11.4-inch infotainment system, presented on the natty curved-glass touchscreen that folds along its lateral centre line to follow the contours of the dash. This is a night-and-day step on from the interfaces the Jaguar Land Rover group has served up previously, looking really snazzy in terms of its graphics and working in a responsive, intuitive fashion. Beyond this, there hasn't been quite as much sculptural rebuilding to the E-Pace's fascia to accommodate Pivi Pro as there has in the F-Pace line to accomplish the same task, but there are still visual improvements to be spotted - like the short, leather-clad, newly designed Jaguar shift lever, as well as the rotary climate control dials and attendant 'soft-button' switchgear, a digital instrument cluster and the fresh Jaguar steering wheel with simpler spoke controls and a tidier design. With the F-Type's 'saints above, preserve us!' grip-handle for nervous occupants framing the passenger side of the centre console, this feature better accentuating the driver-focused nature of the dashboard, the E-Pace's cabin turns out to be a very pleasant place to spend some time. Great driving position, too; just about the right semi-command height to it to justify the fact you're in a crossover-SUV, and yet more of a feeling that you're hunkered down within the guts of the interior, rather than perched up above it in the roof lining.

The E-Pace P300e uses a charming drivetrain that pairs a three-cylinder, 1.5-litre turbocharged petrol engine with an 80kW (109hp) electric motor. It's quite some engine, too, as few 1.5s of this layout can put out 200hp and 280Nm all on their own; that's basically Ford Fiesta ST territory.

Anyway, although the badging is similar and the engines used in both are petrol units, there's quite a lot of technical differences between the layout of the E-Pace P300e and the also-newly introduced P400e drivetrain in the larger F-Pace. For instance, the latter's electric motor is sandwiched into an eight-speed ZF gearbox and there's a physical shaft linking the two axles, resulting in a longitudinal alignment of the 2.0-litre four-cylinder engine up front, while in the E-Pace P300e the 1.5-litre is transverse-mounted and handles drive to the front wheels through an Aisin eight-speed automatic gearbox. The actual electric motor is an ERAD, or 'Electric Rear Axle Drive', unit mounted at the back of the car, meaning there is no physical drivetrain link between the two axles; so in EV mode, the E-Pace P300e is rear-wheel drive, while running purely on petrol it's front-wheel drive, and only in the hybrid setting can it power all four wheels at once through recourse to both of its motors.

Because of this ERAD layout, the 15kWh net lithium-ion battery pack sits under the vehicle's floor ahead of the rear axle, so Jaguar claims no loss of boot space in the P300e model when compared to any other E-Pace in the range. And, on a more similar vein to its grander P400e relation, the plug-in hybrid junior Jag SUV can take a 32kW DC charge to replenish 80 per cent of its battery capacity in just half-an-hour, or the same level of charge on a 7kW AC connection in one hour 24 minutes on a Mode 3 cable.

Regrettably, all this clever tech makes the E-Pace P300e heavy. In fact, at 2,173kg, it is only 16 kilos lighter than the larger F-Pace P400e that has an extra cylinder in its engine, plus a larger battery pack and more potent electric motor. Nonetheless, this bulk doesn't seem to impact on the appealing manner in which the E-Pace P300e drives. It doesn't quite have the traditional Jaguar fluency and suppleness to its motions, possessing a firmer and occasionally sharp-edged low-speed ride (admittedly, our test vehicle was on 20-inch alloys, when it normally rolls on 18s) and a more stolid cornering stance at speed, but it never feels like a wallowing mess when you start pressing on in it. In fact, it's quite a lot of fun.

This is because the steering is excellent on the E-Pace P300e, wonderfully accurate and superbly weighted to boot. Feedback isn't off-the-charts good but there's enough of it present in the set-up that you know exactly how much grip the front end of the SUV has at all times, and it transpires that the amount of adhesion the leading axle of the E-Pace can generally summon up is officially known as 'oodles'. Turn-in is keen, not cumbersome, and the little Jaguar hybrid will gamely hang onto its line through a corner, even at a pace that's taking a liberty with the laws of physics.

It's a pretty refined machine, too, managing to be more comfortable in the ride department at speed and also providing a suitably hushed ambience in the cabin on extra-urban roads and motorways. It's not class-leading on this score, like other Jaguars in other market sectors might feasibly claim to be, but by the same token there's not excessive tyre chatter, noisy wind buffeting about the passenger compartment nor noticeable clunking from the suspension to report with this SUV. You could go long distances in the E-Pace P300e and get out of it at the other end of your journey feeling thoroughly refreshed.

We also couldn't notice a deficit in the smoothness and behaviour of the Aisin eight-speed auto when compared to the ZF in the F-Pace, when so many people will have you believe that ZF torque converters are superior to all else in the zany, exciting world of self-shifting transmissions. And then, as a final cherry on the cake of the E-Pace's assured dynamic performance, the 1.5-litre engine is a little gem. It makes a great noise as it revs out, and it feels willing and urgent all the way to the redline at 6,000rpm, when so many of these three-cylinders get all breathy and limp as they pass 5,000 revs. Quick little thing, too, pulling insistently to 120km/h in a manner that speaks volumes of its sizeable system outputs of 309hp and 540Nm.

Oh, and despite being driven about the place for 50km in a driving style not in any way conducive to fuel economy or sensible plug-in-hybrid energy resource management, the E-Pace P300e turned in a relatively stellar 48.7mpg (5.8 litres/100km). Plus, that was in cold ambient temperatures. Driven more carefully and in nicer weather, beneficial fuel economy returns should not be beyond the reach of this petrol-electric drivetrain. And it is as lovely and as discreet in full electric mode as any other EV you can think of. Will you get 55km of zero-emissions driving out of the E-Pace plug-in hybrid? Probably not, in the real world, but upwards of 40km ought to be achievable by drivers of all skill levels.

Jaguar's burgeoning plug-in hybrid portfolio takes solid form with this likeable E-Pace P300e. It's not inexpensive and the whole machine is a weighty thing considering its relatively compact size, but it drives well, has impressive levels of overall refinement, packs a highly appealing three-cylinder electrified drivetrain and now has one of the best cabins in the market sector. All round, the plug-in hybrid, facelifted E-Pace is a difficult product to ignore if you're considering making the switch to an electrified SUV - of any size - in the short- to mid-term future. 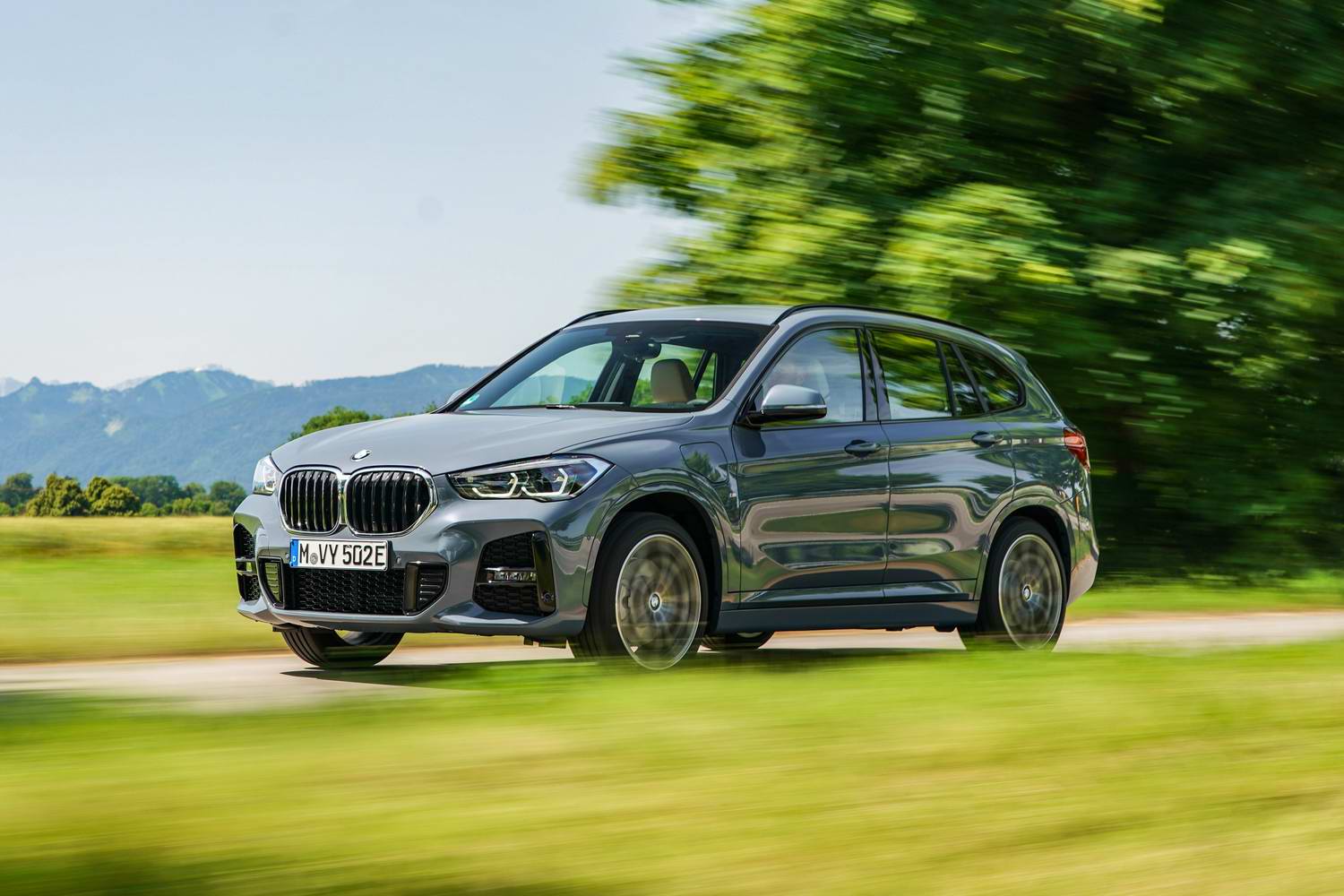 BMW X1 xDrive25e hybrid (2020) review
BMW X1 xDrive25e vs. Jaguar E-Pace P300e hybrid (2021): another one teaming a three-cylinder petrol engine with a modest electric motor, the BMW is nowhere near as powerful as the Jaguar, but its parent company does claim superior eco-stats to the P300e. However, the charging rates are much slower on the BMW. 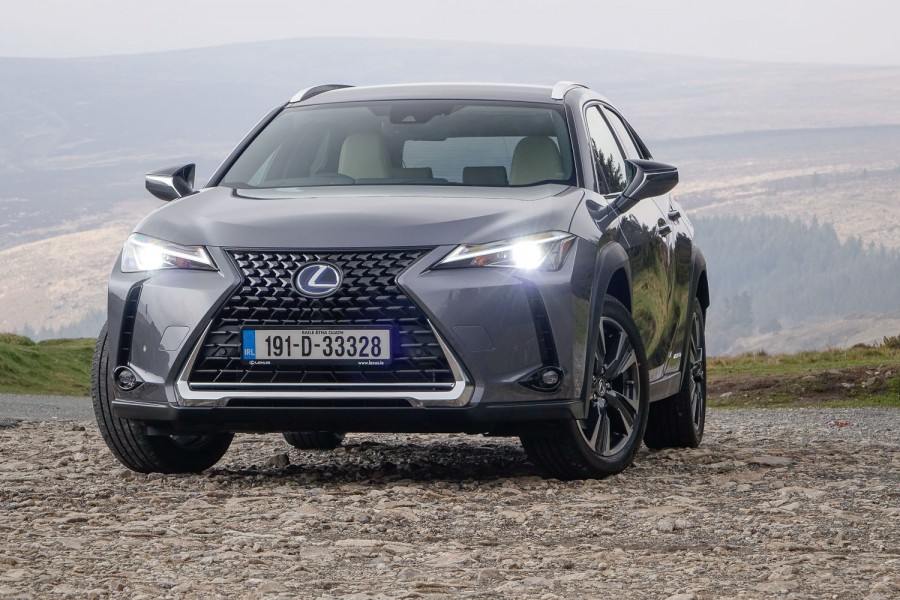 Lexus UX 250h (2019) review
Lexus UX 250h vs. Jaguar E-Pace P300e hybrid (2021): you could be very daring and try the UX 300e full electric, but with a total range of 300km in an absolutely ideal scenario, you may be better off with the non-plug-in hybrid version of the Lexus UX. Great to drive and look at, but the infotainment system is infuriating still. 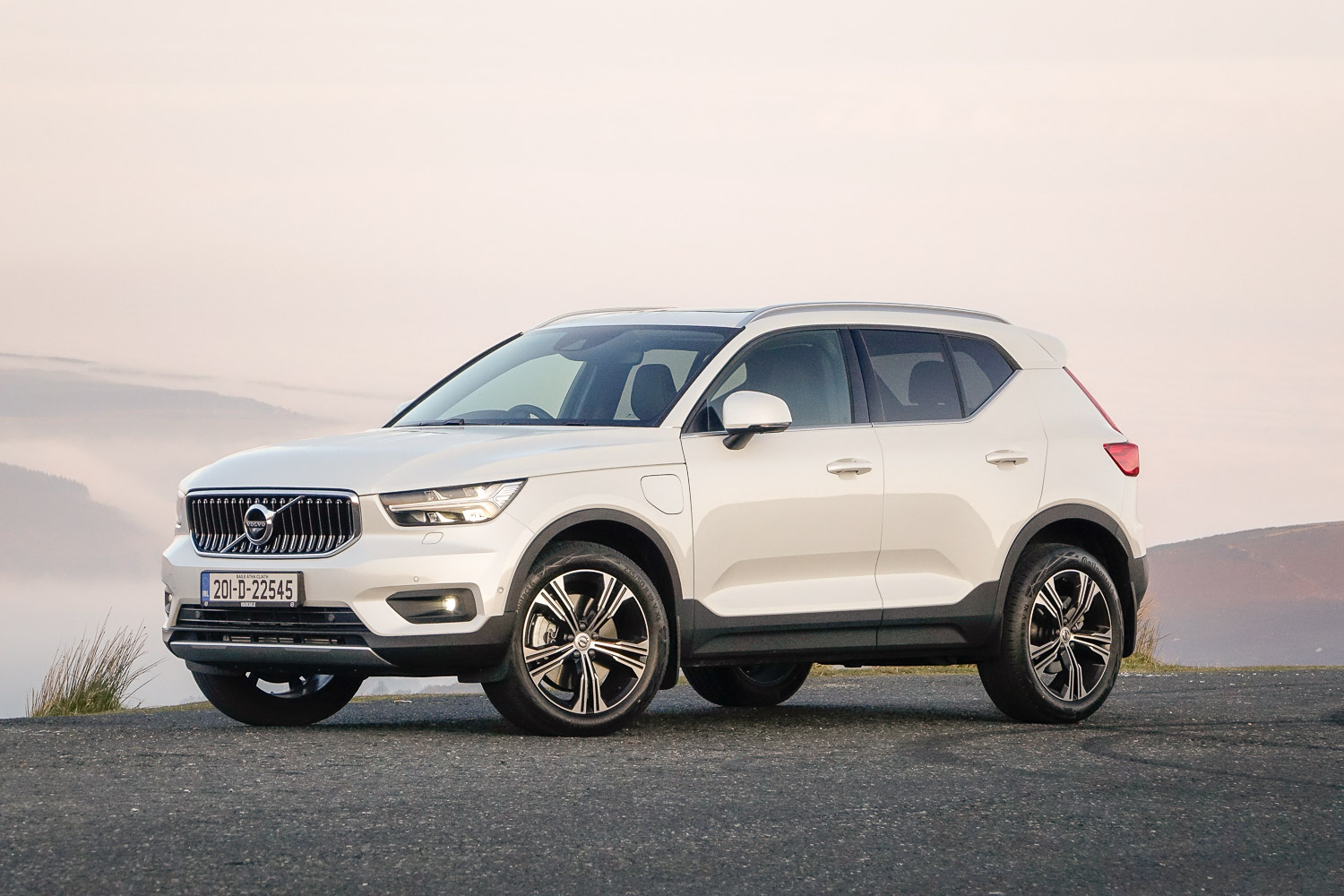 Volvo XC40 T5 hybrid (2020) review
Volvo XC40 T5 Recharge vs. Jaguar E-Pace P300e hybrid (2021): great to look at, quality cabin and a similarly joyful three-cylinder hybrid drivetrain mark out this stylish Swede, although the T5 isn't as powerful as the P300e and we'd say it's nowhere near as much fun to drive when the corners come, either.