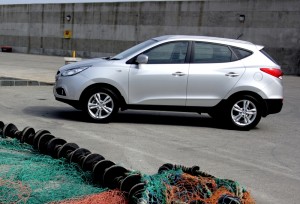 Hyundai's ix35 is close in concept to the Nissan Qashqai, but is it as impressive?

Hyundai makes no bones about it: it wants a part of the Nissan Qashqai pie. Can the ix35 lure buyers into Hyundai showrooms?

Choose the paint colour of your ix35 wisely. Hyundai's designers have been allowed a refreshingly free rein on the exterior style of its crossover, but all their work is lost if you specify the car in black. Then again, if you don't wish to turn heads, that's the colour to go for. We prefer it in a bright metallic hue. It's a really modern shape, a world away from anonymous Hyundais of old.

The same can be said for the interior: there is real flair to the design of the dashboard. Its execution is pretty good too, with a decent selection of plastics. I'm not the first person to point out that it's a pity that the steering wheel, gear knob and handbrake are not trimmed in leather - especially as the wheel itself features useful controls for the audio system and cruise control. In fairness, the plastic used is tactile enough, but the Nissan Qashqai feels nicer from the driver's seat for that reason alone.

In terms of interior space, passengers are well catered for. There is virtually no rear transmission tunnel, so legroom in the middle seat is almost as good as the outer two. The boot is a good size too, though peek underneath it and it's incredible how big the spare wheel well is. It's a pity the rear seats don't fold completely flat, but then again neither do the Qashqai's.

We can't fault the performance on offer from the 2.0-litre CRDi turbodiesel engine; it really is a powerful unit. Maximum power is quoted as 136hp, while there's up to 320Nm of torque available. That makes itself felt from very low revs, making the ix35 feel faster than its 10.8-second 0-100km/h time suggests it will be. It's not a car you hurry through the gears though, as the gearchange isn't all that precise in comparison to its rivals'.

The 2.0-litre diesel is the only engine option at the time of writing, though an all-new 1.7-litre unit is on the horizon. Hopefully that's a bit quieter, as the current engine is vocal at all times.

In-town comfort does not a good chassis make. That's essentially the ix35's only party trick. In this setting it soaks up everything thrown at it and feels very comfortable. However, on the open road or motorway it isn't quite so impressive. It does a good job of soaking up bigger bumps and potholes, but the ride doesn't ever really settle down, so the experience for passengers is a fidgety one.

That's not in the name of fun behind the wheel either. The steering at first feels numb, but with familiarisation it's clear that the weighting is a little inconsistent, reducing your confidence in the car on a twisty road. All in all the ix35 isn't a bad car, but put it up against the Qashqai and it's the latter's chassis that feels more complete.

Despite the bigger engine, we averaged about the same fuel consumption in the 2.0-litre Hyundai as we did in the 1.5-litre turbodiesel Qashqai, which is a good result. The figure was 8.0 litres/100km (35.3mpg).

Emissions are rated as 147g/km, which puts the ix35 into tax Band C. The forthcoming 1.7-litre version will be in Band A.

To take on the Nissan Qashqai at its own game was always going to be a tough call for the Hyundai ix35. In some areas it manages this, especially in terms of design and layout - and the performance of the diesel engine. Overall though the Nissan feels more polished and there's now the small matter of the MINI Countryman to contend with too. We suspect the ix35 will fare better when its new engine arrives.