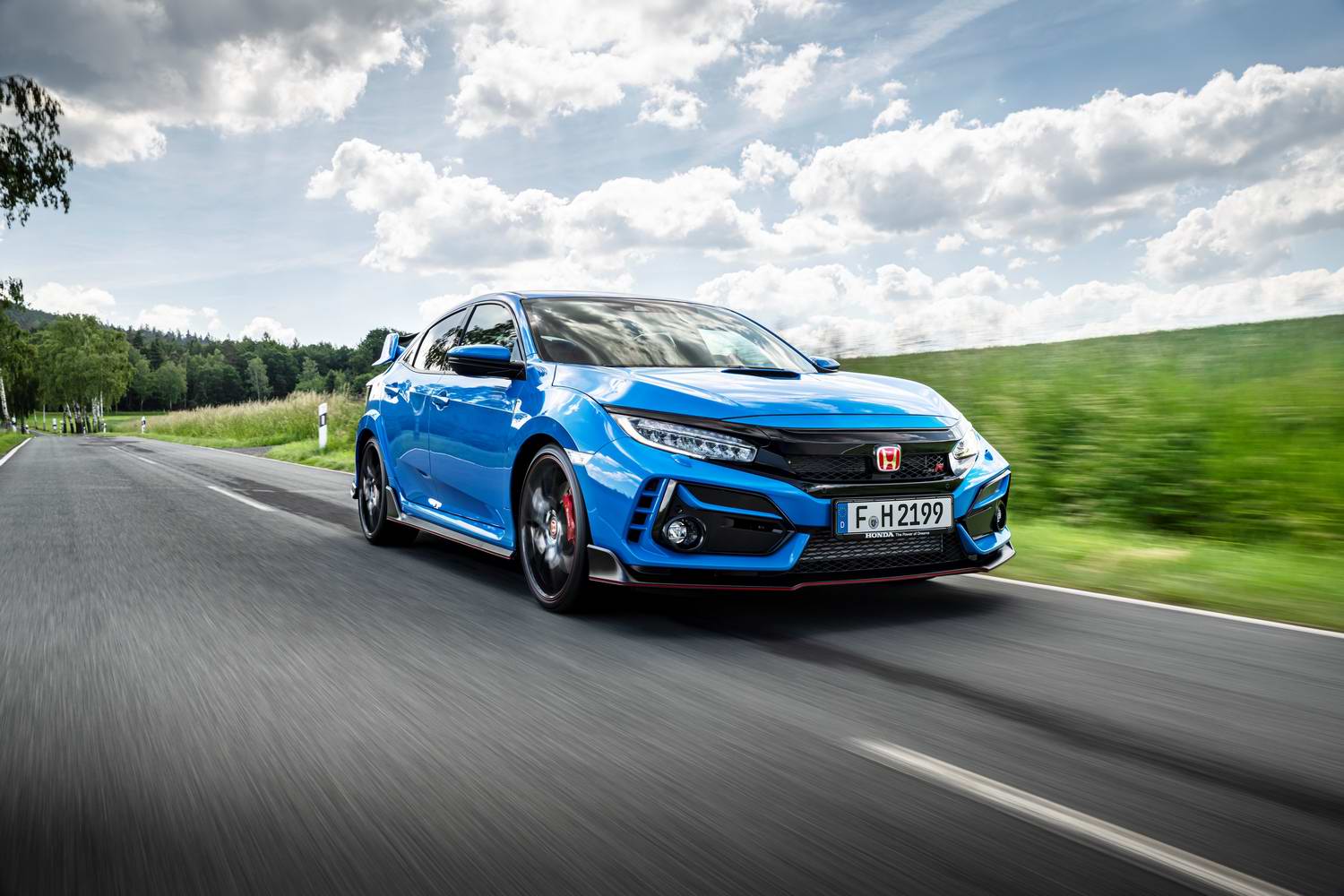 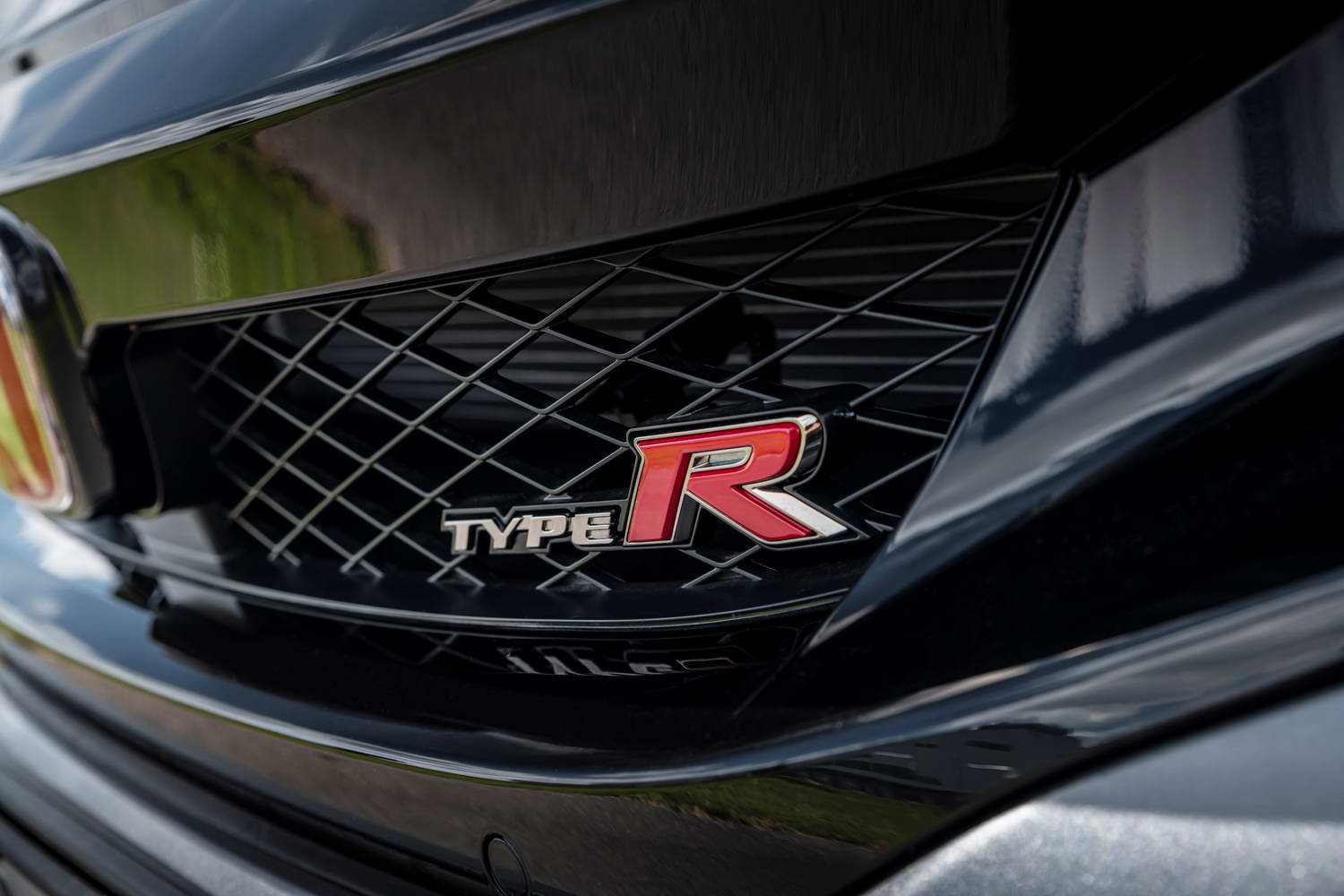 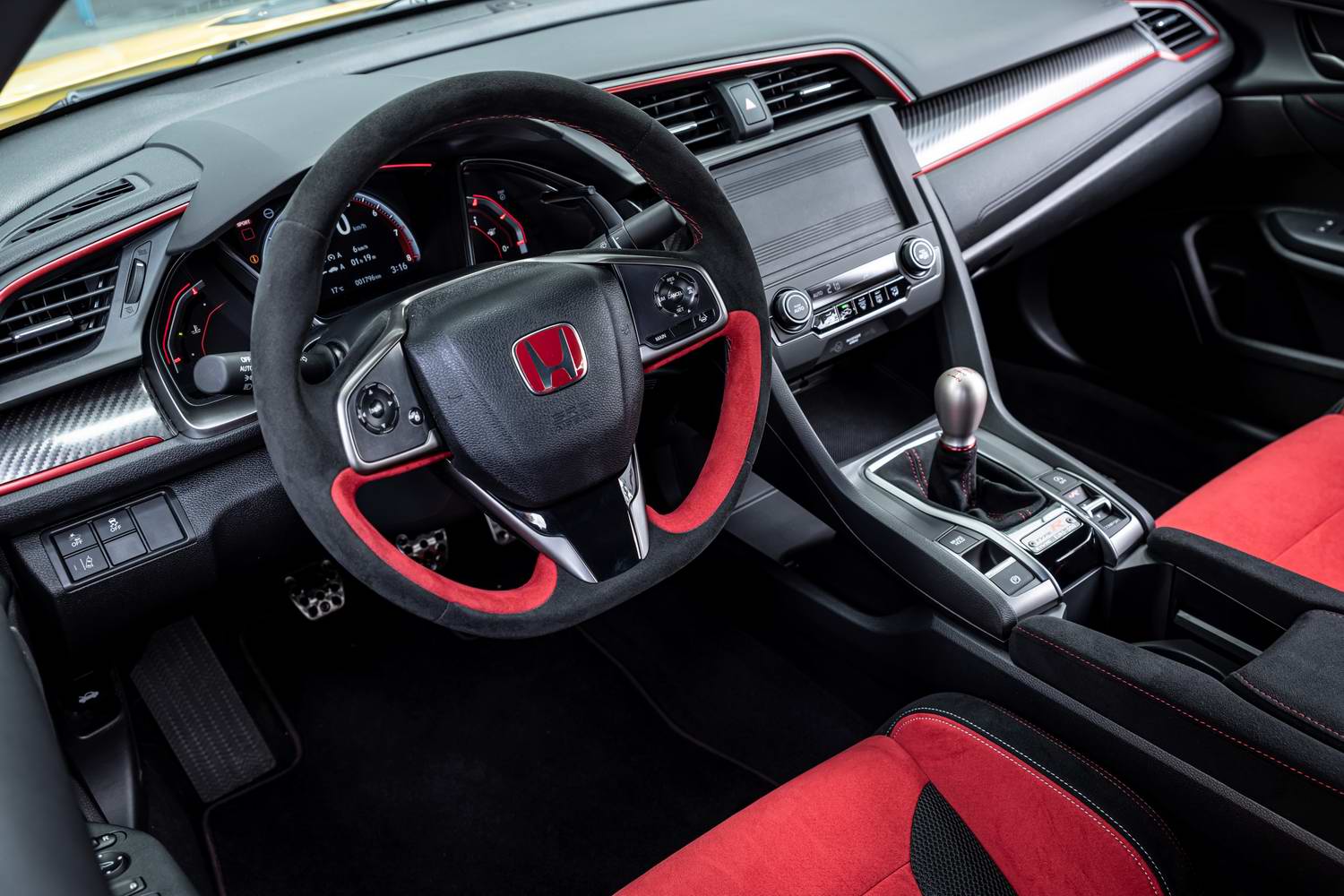 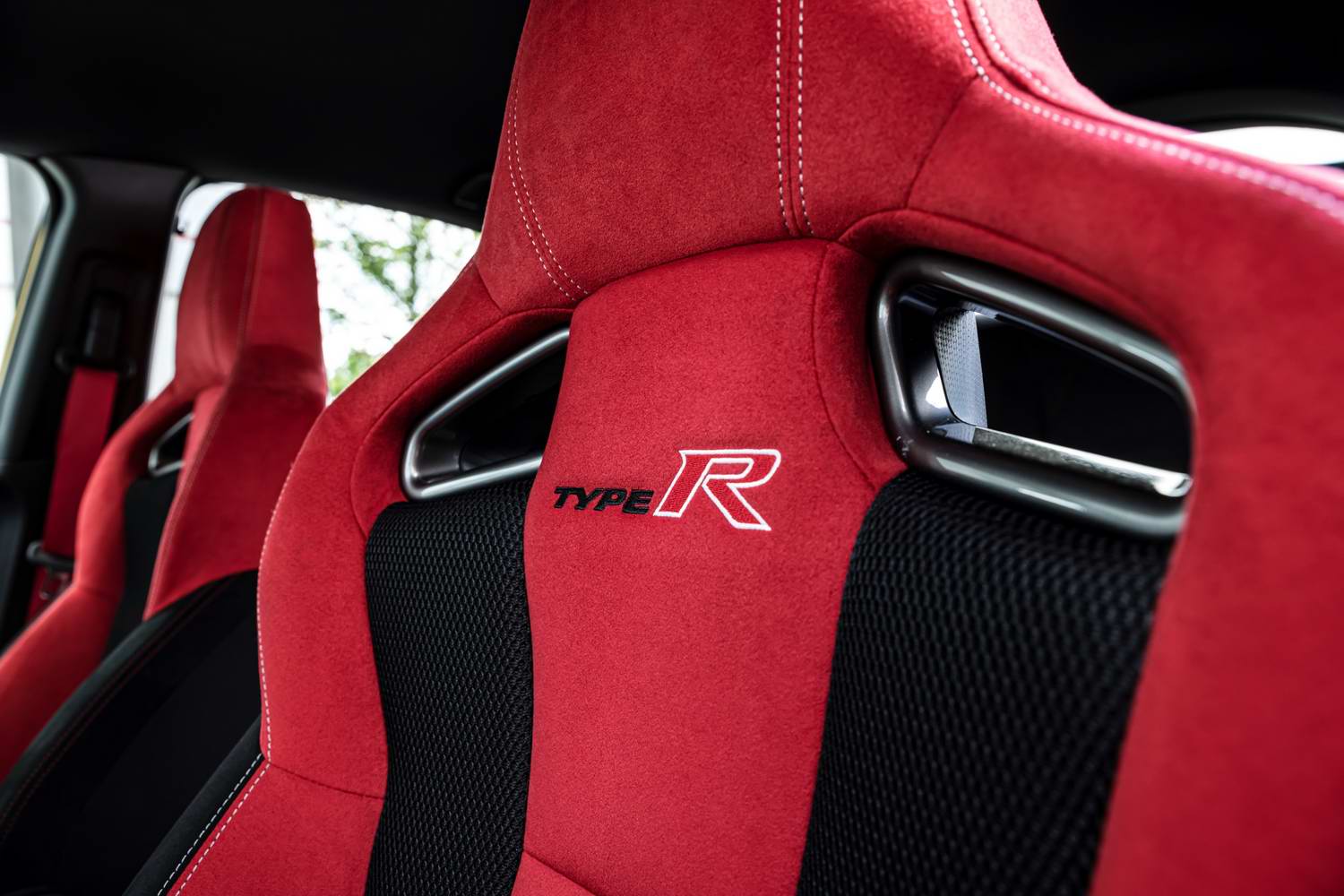 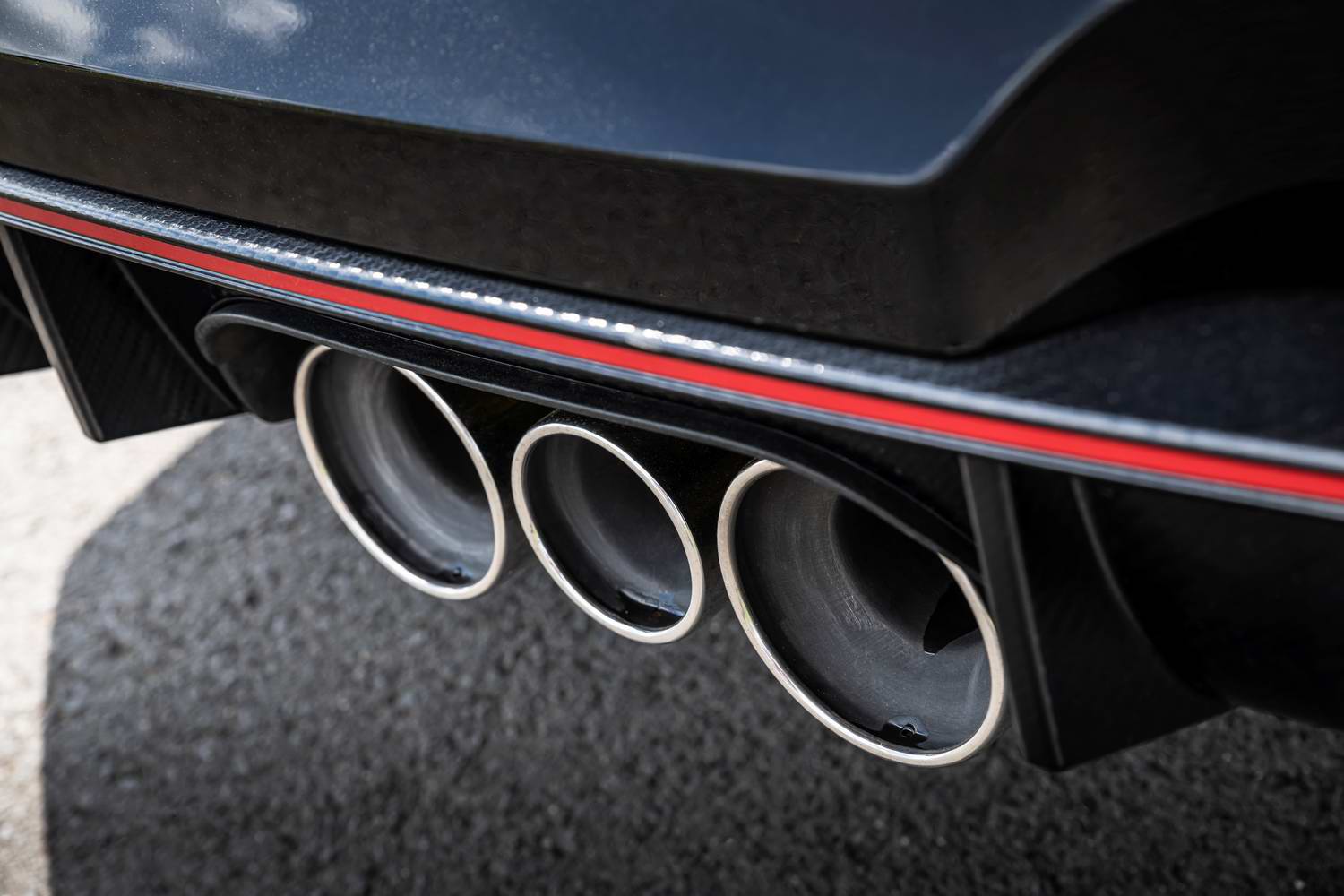 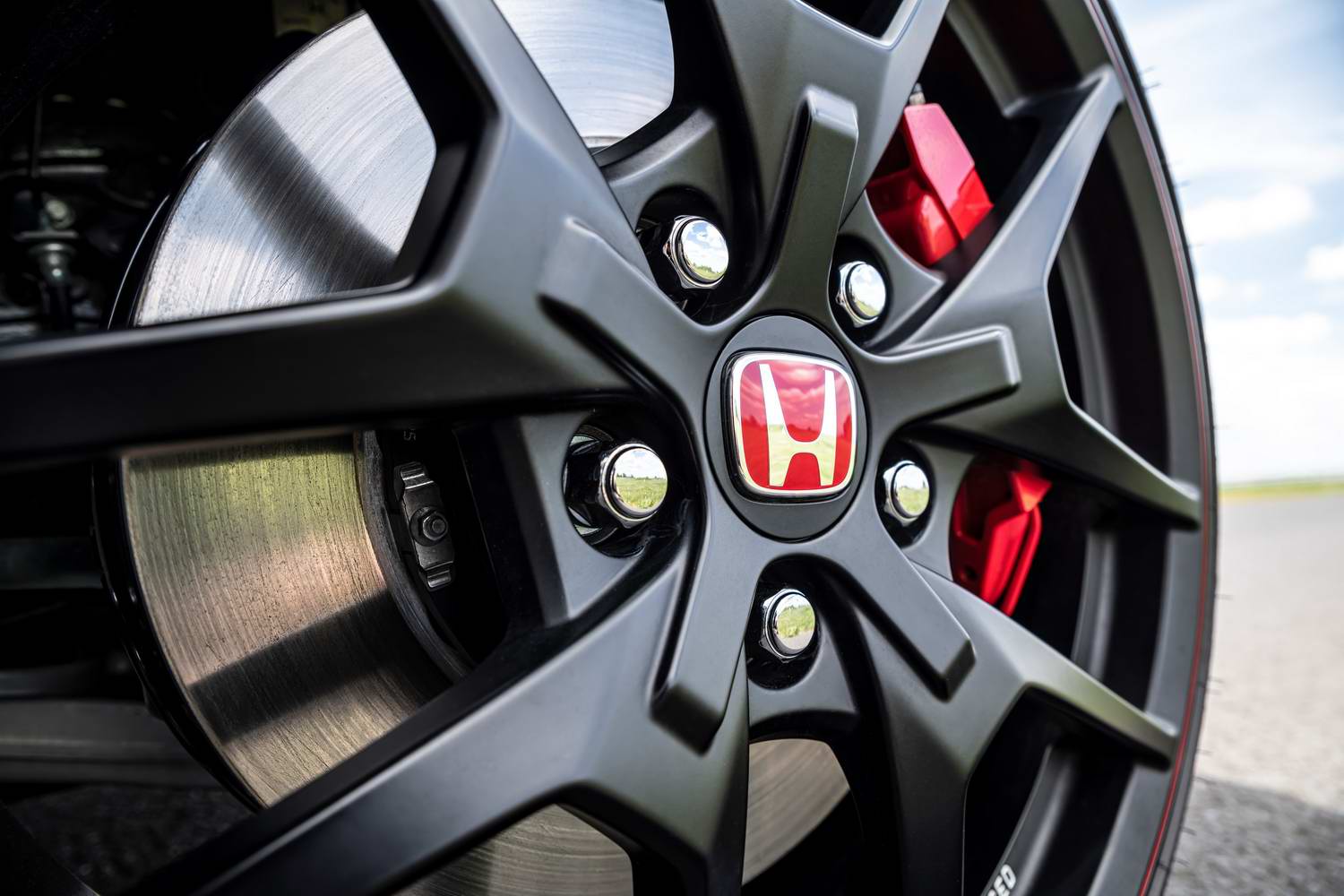 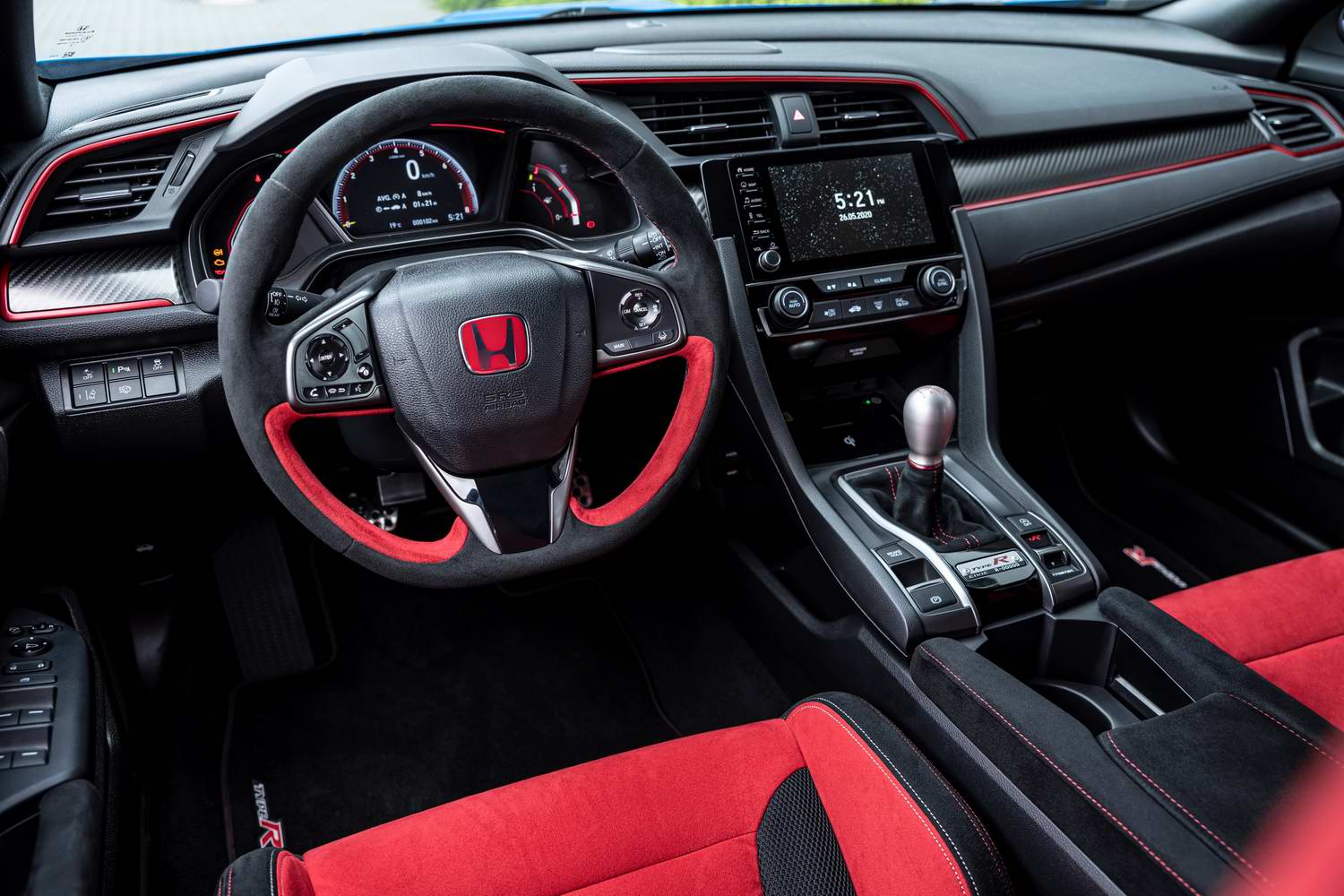 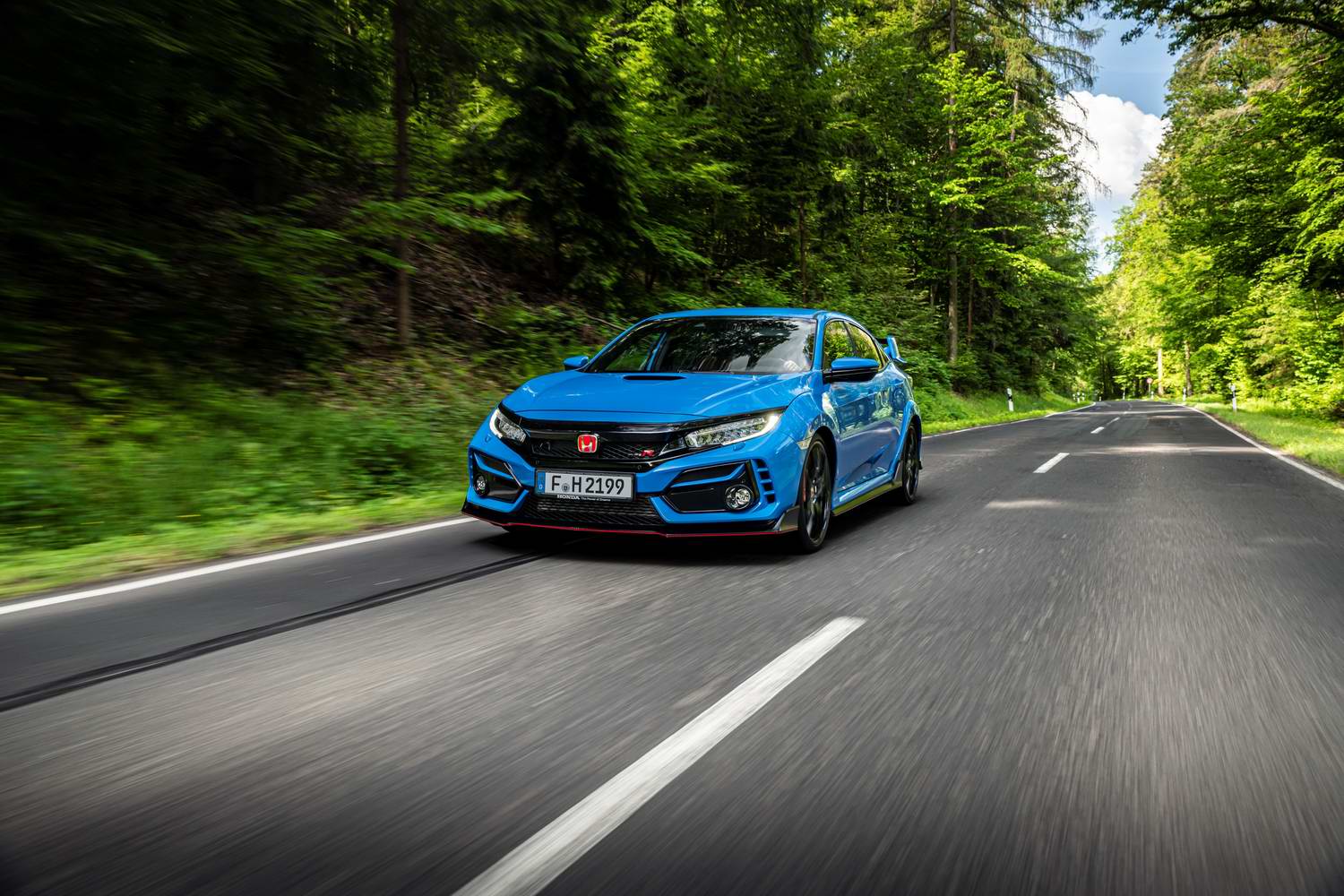 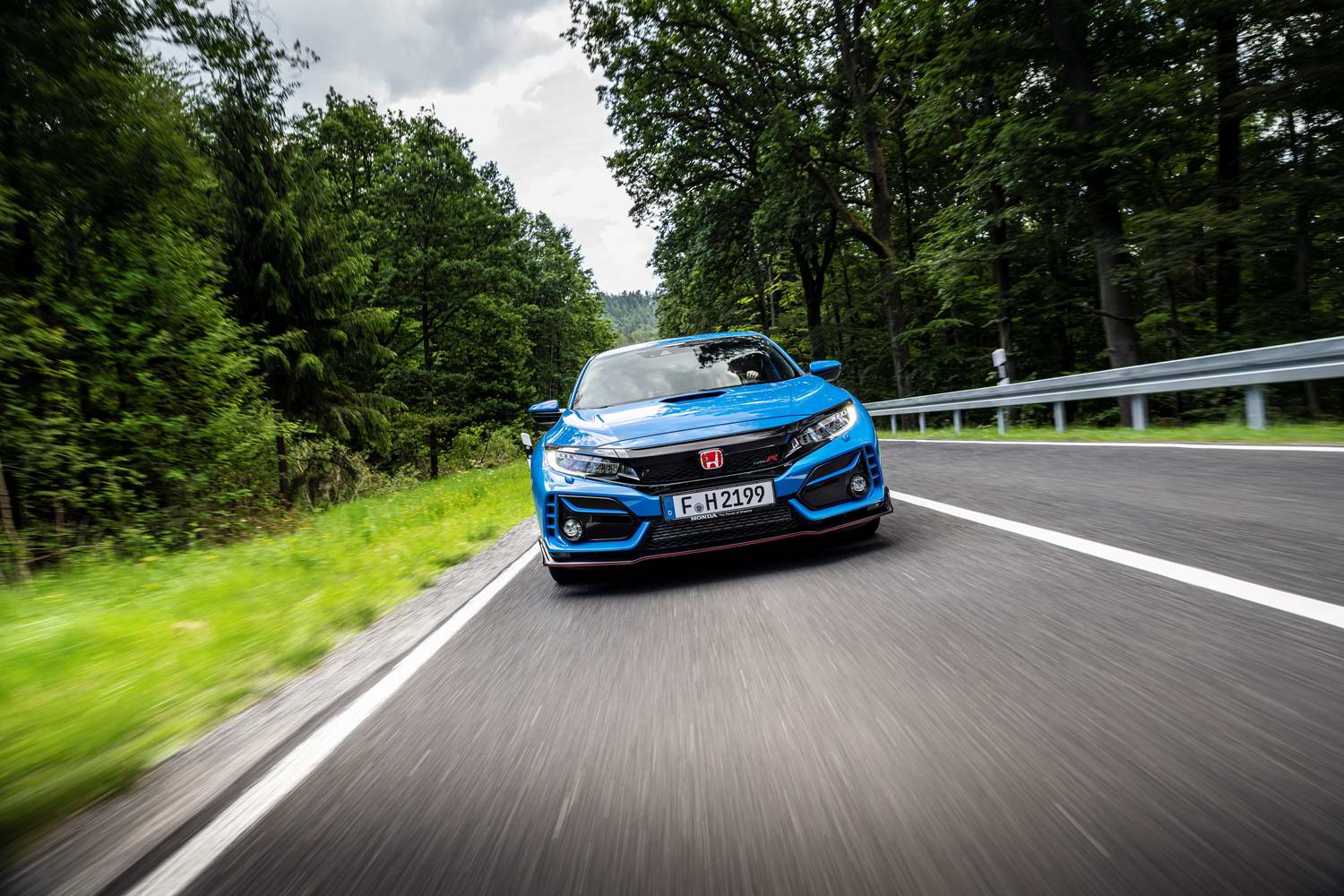 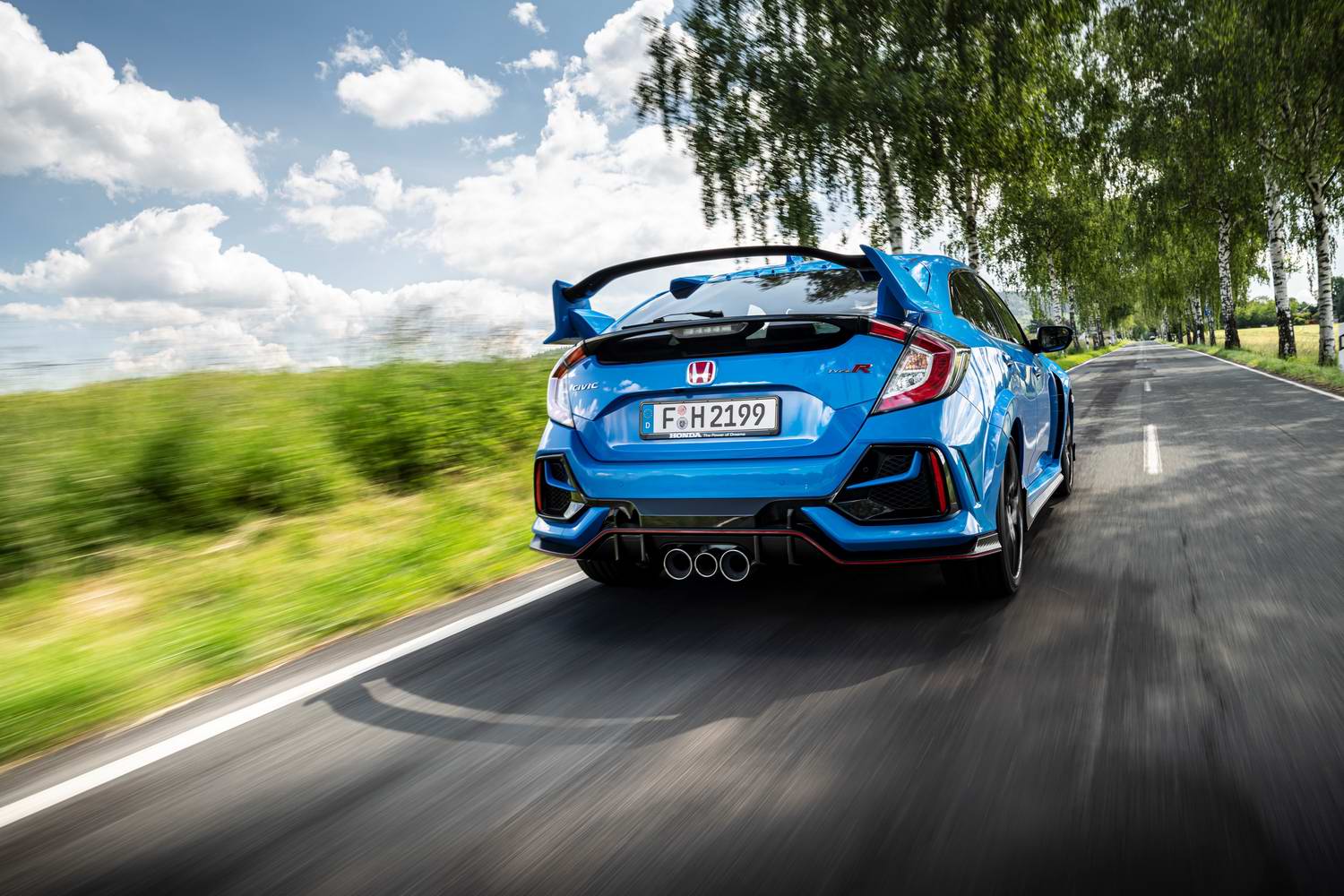 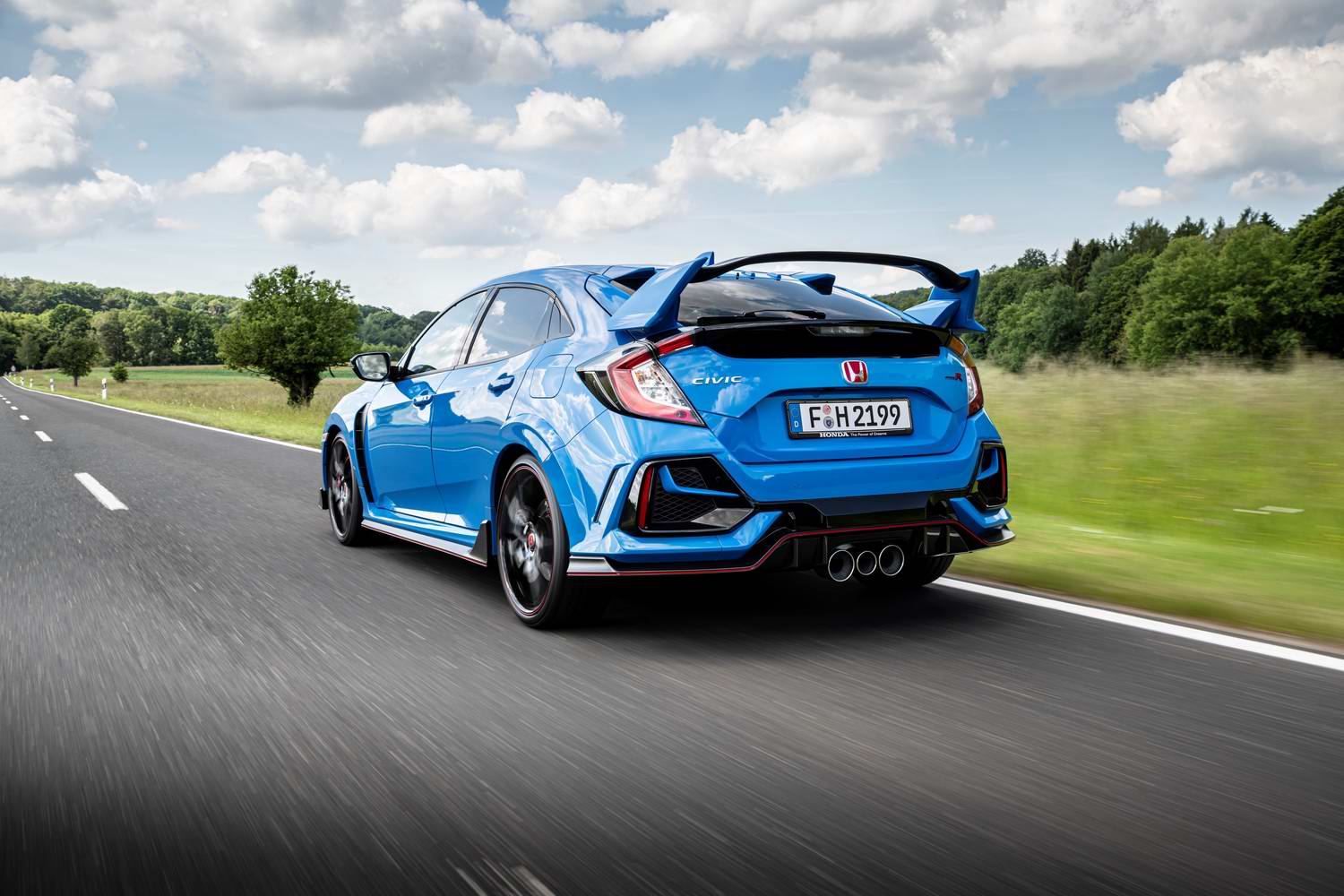 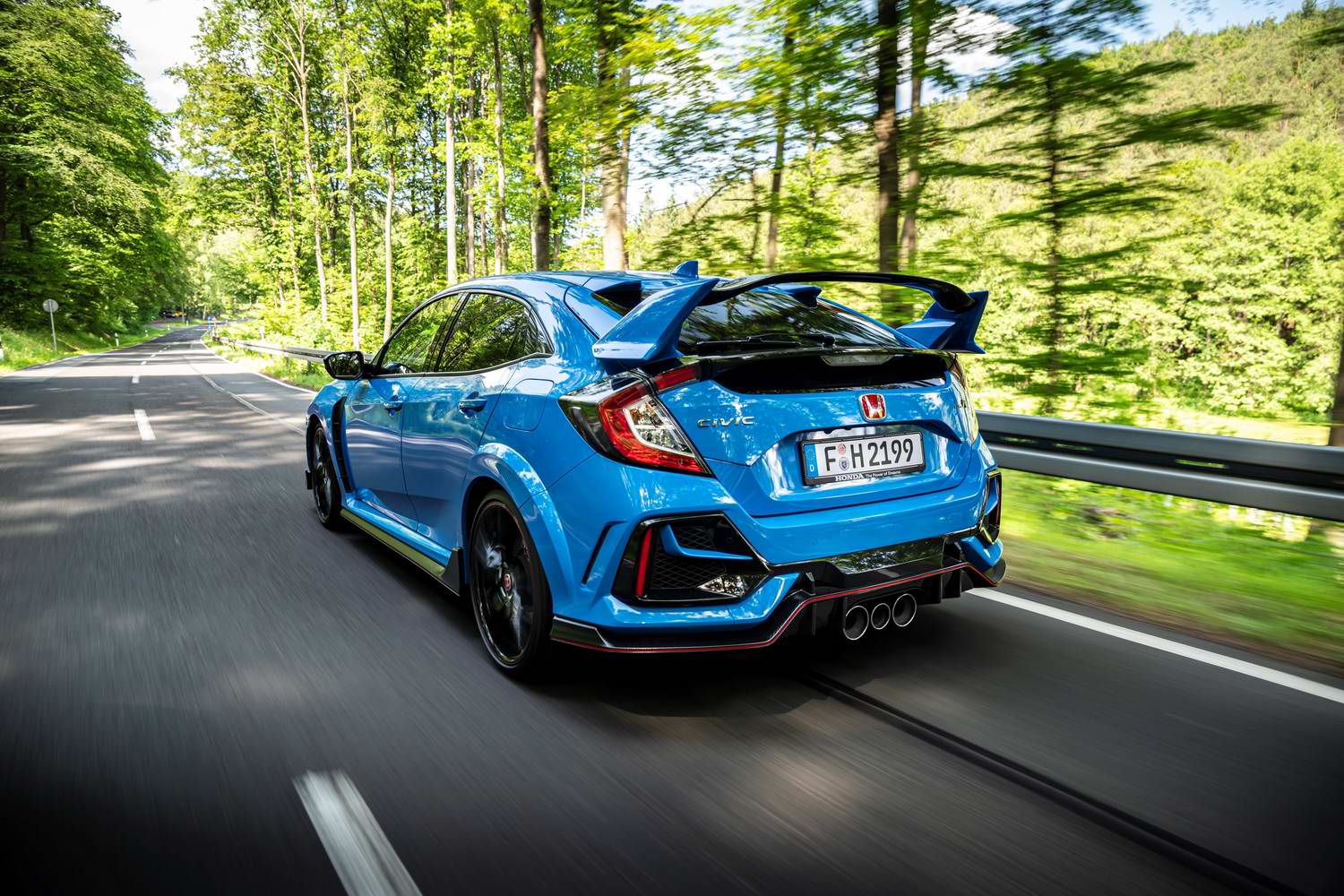 Honda makes some very minor tweaks to its terrific Civic hot hatch. Not that it needed them...

Honda splits the magnificent 'FK8' Civic Type R into three for its midlife facelift, bringing in technical detail changes to make what was already a quite superb C-segment hot hatch into something that little bit sharper and even more rewarding.

Since this generation of the hottest Civic Mk10 appeared in 2017, one of the main divisive points regarding it has revolved around the in-yer-face styling. Now, for the new model year updates, that hasn't really changed much. Look closely at the 2021 Civic Type R GT and you might spot the amendments to the front end, which amount to redesigned fog light surrounds, new styling blades to either side of the registration plate and a larger radiator grille opening. Around the back, those aforementioned blades are repeated in the sizeable vents to either side of the bumper, while a new design of mesh is to be found within these apertures. But, apart from the possibility a Civic Type R buyer has specified the fresh and striking body colour option of Racing Blue metallic, it's not going to be easy to spot.

However. If you don't like the big wings and ultra-aggressive looks of the Honda - we do, by the way, but we appreciate there are plenty who do not - there's now a 'new path' to enjoying your rapid Japanese hatchback. It's called the Civic Type R Sportline and it replaces the towering rear wing with a low-level spoiler, switches out the GT's 20-inch wheels on Continental SportContact 6 tyres for a set of 19s wrapped in Michelin Pilot Sport 4S rubber, changes the lower pinstripe accent line from the GT's red to a discreet grey and inside ditches the mainly-red bucket sports seats for more demure black items instead. It's a 'stealth' CTR, if you will, and it costs precisely no more or less than a regular one (see 'What you get for your money', below).

The third way of going about things is to try and bag the Civic Type R Limited Edition, which is the 'most extreme' CTR yet, claims Honda (the people who said this obviously never drove a JDM-only Civic Type R FD2, then). It is 47kg lighter than the GT model (NB: the CTR Sportline is 10kg lighter than the 1,405kg GT, too, despite additional sound-deadening to make it more comfortable, because its 19-inch wheels are that much lighter than the 20s on the GT) thanks to the removal of a load of sound-suppressing materials, as well as the air conditioning system and audio/infotainment. There's a build-number plaque on the transmission tunnel within and, outside, it also has forged BBS 20-inch wheels with grippy Michelin Pilot Sport Cup 2 tyres, but it is no shrinking violet like the Sportline - the only colour available for the LE is searing Sunlight Yellow paint, which is teamed off against black accents. This, though, is a true collector's piece: just 100 LEs have been confirmed for Europe, none have been slated for Ireland, and all the 20 units available in our nearest right-hand-drive market of the UK were snapped up within an hour of going on sale. Curses.

Inside, the Honda Connect infotainment supports Apple CarPlay and Android Auto, so you can bypass the clunky, proprietary OS that Honda uses, while the steering wheel on all models is now wrapped in tasteful Alcantara. There's also a (no sniggering at the back, please) weighted knob for the gearchange, which is now teardrop in shape instead of the spherical affair it was before. This harks back to some classic hot Hondas, such as the 1992 NSX Type R, any number of older '90s and early 2000s CTRs and Integra Type Rs, and also the S2000 roadster. Other than that, it's as you were before... including those weird, 'part-octagon' dials for the fuel and temperature gauges that are hard to read on the move. Time the Civic went for a full digital cluster, Honda, just like the new Jazz and Honda e models.

Mechanically, the nerdiness of the changes made to the CTR is quite delightful, but on the face of it most punters will think they're getting the same car as the pre-facelift Type Rs. The 2.0-litre turbocharged four-pot VTEC engine continues, driving the front wheels through a six-speed manual gearbox and helical limited-slip differential. Power and torque remain unchanged at 320hp and 400Nm, and this applies to all three variants of the Civic Type R family: the lighter Limited Edition therefore runs a slightly quicker 0-100km/h time of 5.7 seconds to the other pair's 5.8-second sprint, but all cars have the same top speed of 272km/h. Because they're both a bit lighter (and, in the case of the Sportline, running on smaller wheels), the Limited Edition and the 'sleeper' Civic are both slightly better for fuel economy and CO2 emissions than the GT, by enough in the case of the Sportline to push it down into Band E (€750 per annum) for tax - a useful saving over €1,200 every year for the GT and LE cars.

What has changed, then, are the brakes, suspension and cooling. Two-piece front callipers replace single-piece affairs on the old car, which reduces brake deformation during stopping phases and also cuts the 'dead travel' of the brake pedal by 15 per cent, apparently. The larger front radiator grille handles the cooling, but increasing the size of that intake removed downforce from the front axle, so to compensate Honda realigned the small airdam at the bottom of the front bumper to a vertical position in order to regain the otherwise-lost aero. And we were treated to a fantastic slide in the presentation about various things in the suspension like 'compliance bushings', 'tempering for reduced friction', 'longitudinal suspension stiffness' and 'rear bushings for the lower B-arm', all of which are most excellent but which will mean precisely naught to the majority of customers - so, instead, focus on the fact that the sampling rate of the sensors for the Civic Type R's adaptive damping has been increased by a factor of ten, from 2kHz previously to 20kHz now. Yes, that still looks frighteningly technical written down, but what it means is that the Honda should be even more comfortable when you want it to be and even more astonishing in the corners when you're having a bit of fun behind the wheel.

So while visually you might not be able to see much that is different about the new Civic Type R GT, experientially it's a significantly improved beast - and it was duking it out with the Hyundai i30 N for class honours as it was before all this 'remedial' work from its parent company. Starting with those two main driver interfaces within, the simple acts of putting some Italian pseudo-suede around the rim of the steering wheel and then changing the gear knob for that beautiful, ergonomic teardrop item both serve to better key you into the CTR experience that little bit more; it feels a special car when you're first low-speed manoeuvring it to get it out onto the road, more so than it did previously. Then there's the comfort and refinement. In Comfort mode, the Honda really lives up to its billing, with a marvellously cushioned and accommodating ride and quiet manners. Unless you catch sight of the giant hoop perching atop the boot lid in your rear-view mirror, you might easily forget you're driving the 320hp version of the Civic as you simply tootle along.

But you won't forget the power and poise of this car once you unleash that thumping 2.0-litre engine. Everything that was exceptional about the Honda's handling before the updates continues here, only with perhaps a trace more sharpness to the turn-in, improved pedal feel from those fancy brakes and excellent damping in both Sport and +R driving modes. Yes, it becomes quite firm and aggressive in +R, but it's not unusable on smoother public road surfaces and the body control is absolute in this setting. Get it stoked up, which takes no effort at all, and the Civic Type R can still thrill you like no other hot hatch operating in remotely the same sphere of influence that it inhabits. We adore it.

Any issues about the dynamics at all? Well, there's one major bugbear and it's noise. Whereas previous Civic Type Rs might not have had the muscle of the FK8, they could rely on the keening wail of their naturally aspirated VTEC engines operating at high revs to bring some acoustic wonder to proceedings. The current model, though, sounds fairly uninspiring in Comfort, a little more raspy but not brilliant in Sport... and then way too artificially augmented in +R. This is the revised Active Sound Control (ASC) coming into play and it's the thick, buzzy growl resonating around the cabin that more puts you off using +R on the road, rather than the brittle damping. This would be fine if you could pick and choose the various adjustable dynamic attributes and then customise them in your own 'Individual' setting for the car, but the Honda doesn't offer such a mode. Oh, and the rev-matching function is still buried deep within the mediocre infotainment; annoying, because the FK8 CTR is a car in which it is almost impossible to perform bad heel-and-toe downshifts on your own. Stick us a 'REV' button on the steering wheel, Honda, one of your chief rivals has worked this out and done just such a thing...

Both the GT and the Sportline Civic Type Rs start at €56,225 in Ireland, with generous specifications on each - including adaptive dampers, LED headlights, Honda Connect infotainment with Garmin navigation as well as support for Apple CarPlay and Android Auto, Bluetooth, a rear parking camera, an eight-speaker stereo system, auto lights and wipers, dual-zone climate control, adaptive cruise control, keyless entry and go, parking sensors front and rear, Qi wireless smartphone charging, power-folding door mirrors and front LED fog lights on the comfort list, with safety systems incorporating Forward Collision Warning, Traffic Sign Recognition, Collision Mitigation Warning, Lane Departure Warning, Lane Keep Assist, High-Beam Support and Blind Spot Information with Cross-Traffic Monitor too. So while €56,000 is quite a lot more than most of its front-wheel-drive rivals start at, in the Honda's defence few other cars in this class drive anything like as well as it does, there's loads of kit bundled in as standard, and it's still cheaper than the mega-hatches from the likes of Audi, BMW and Mercedes.

Nothing drastic has changed on the Honda Civic Type R, but then precious little needed to. Minor irritants like the fake ASC, the borderline-illegible instrument cluster dials, the dated infotainment and the buried rev-matching function all pale into insignificance when you sample just how outrageously talented the CTR's chassis and drivetrain combination is. So, it's as brilliant and as eye-catching as ever, and - if you don't like the way the ostentatious GT looks - then now you can have your Civic Type R in stealthy Sportline mode. Outstanding stuff from this Japanese marque, all told. 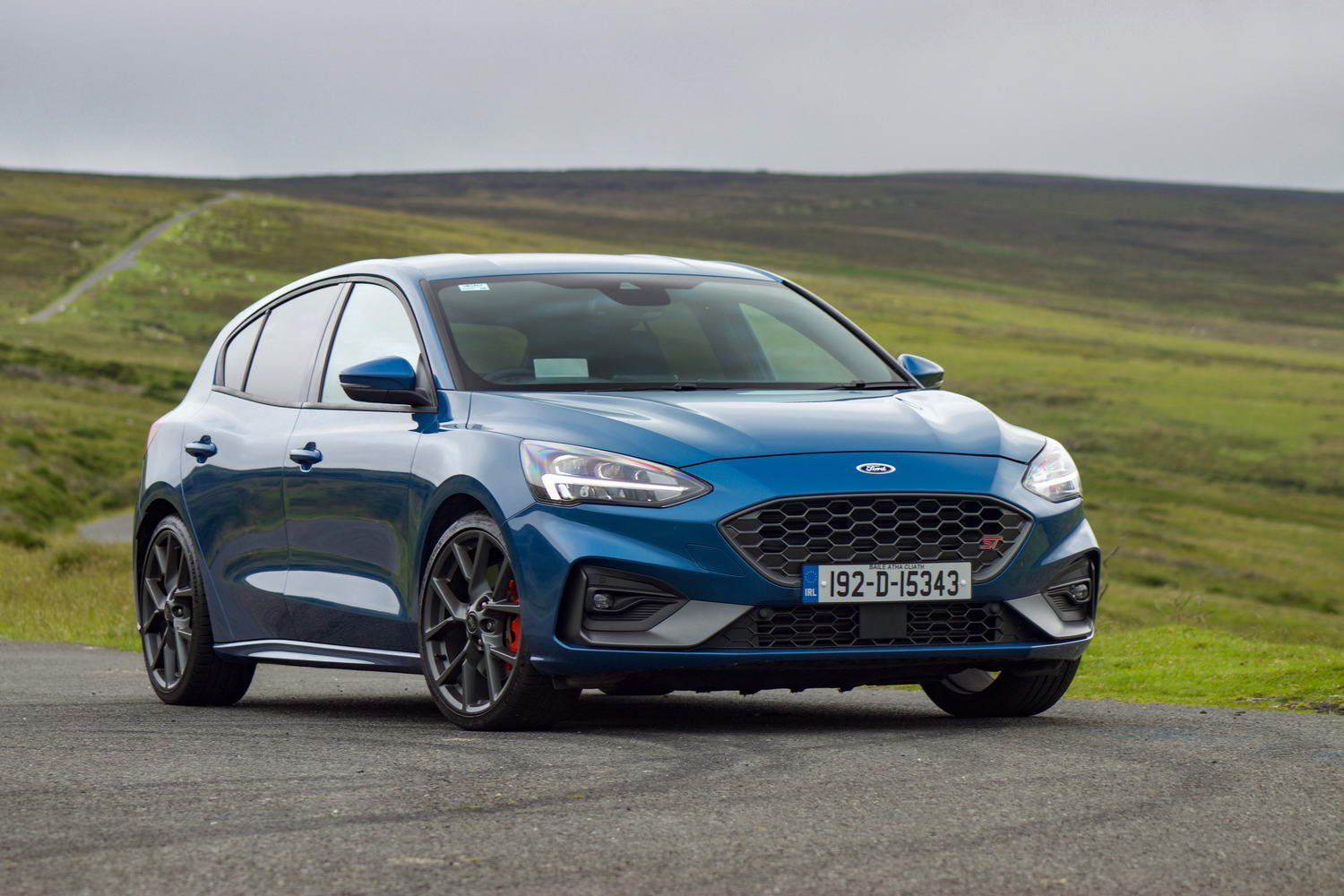 Ford Focus ST hatchback (2020) review
Ford Focus ST vs. Honda Civic Type R (2021): has less power but more torque than the CTR and a more demure appearance, although the odd steering and hyper front e-diff on the Focus make it less fun to drive than the Honda. 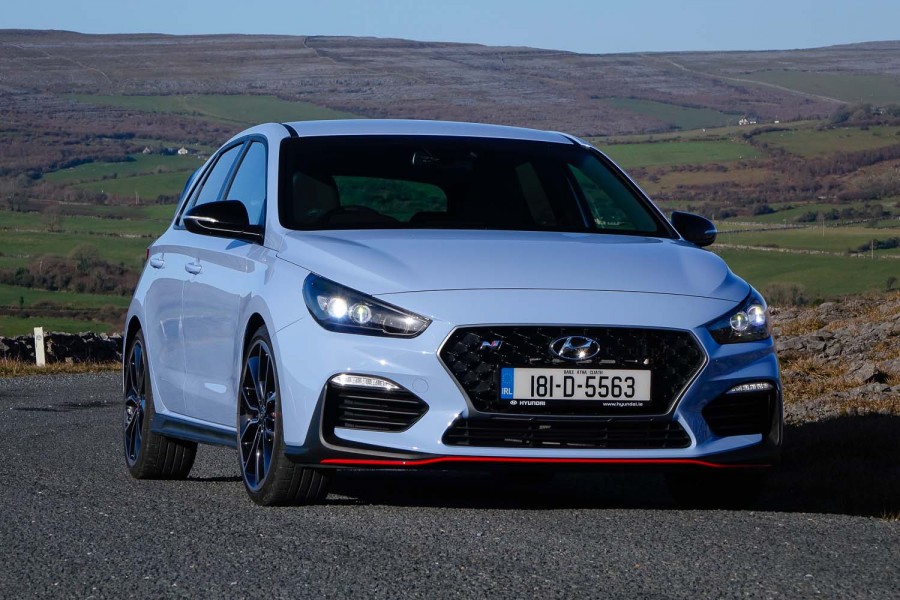