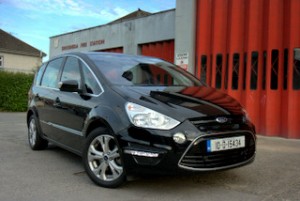 If you need an MPV but are scared you will be bored to death, fear not. Ford has the S-Max.

It used to be the case, as a car reviewer, that the week you would look forward to least was the one where you would be 'stuck' in an MPV.

They generally were pretty awful to look at and not much better to drive, but things have got a lot better recently, helped in no small part by the Ford S-Max, a model that proved that you could make a seven-seater both good to look at and interesting to drive.

Now, the S-Max has been revised and refreshed. Both it and its slightly larger sibling, the Galaxy, have been given new noses, LED rear lights and - on some versions - optional daytime running lights. There are changes to the interior too, with new materials being used and greater versatility to the seating combinations.

Engine choices include a new 203hp 2.0-litre EcoBoost petrol model that combines petrol direct injection, turbocharging and variable camshaft timing to reduce emissions by up to 20 per cent, but the main sellers are still likely to be the diesel versions, which come with power outputs of 115-, 140- or a new 163hp variant.

We have been handed the keys to the 140hp version and it is fitted with the new double-clutch PowerShift transmission. It is the Titanium model, so as well as the dual-zone climate control, sports seats and cruise control of the Zetec spec model, this gains 17-inch alloy wheels, automatic headlights and wipers, the Convers+ instrument cluster and a Sony stereo system.

The S-Max is a really nice place to spend time. This new transmission is smooth and around town it is the ideal gearbox. I would imagine that this would make the school run (if I did one) a whole lot easier. On the motorway, this 140hp engine seems pretty quick and it is very refined. Visibility from the cabin is great because there is so much glass and the front seats are also very supportive. I have tried tricking around with the rear seats and they are a little fiddly but you get the hang of the various sliding and folding combinations pretty easily really.

Over the course of the week the S-Max has proven itself mighty useful. Fold down the rear seats and you essentially have a van, while kids (I borrowed some) love the back seats and are especially made happy by the amount they can see. It really is a superb 'car' to drive, feeling more like a large Ford Focus than a people carrier. Obviously the price of our model puts it at the premium end of the market, but if we were shopping in this segment it would be difficult to pass. At entry level this car is very good value and looks set to be a strong seller in 2011.