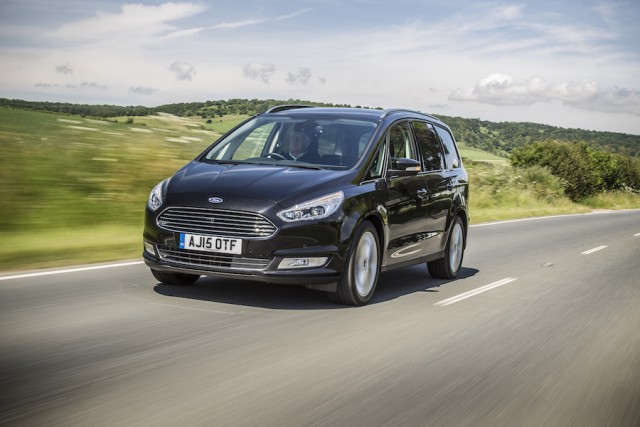 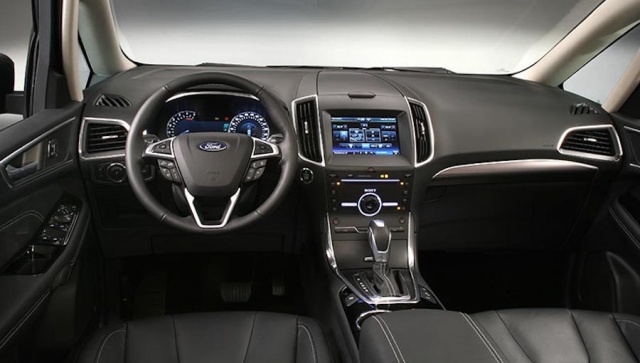 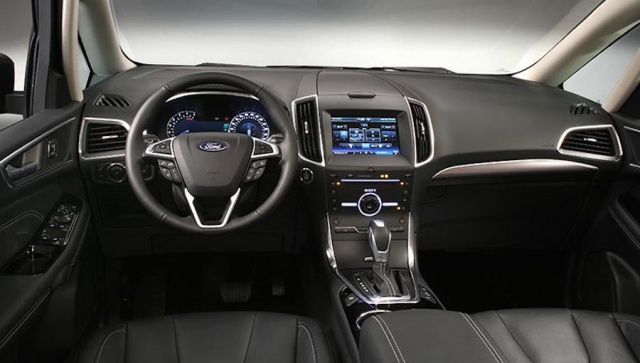 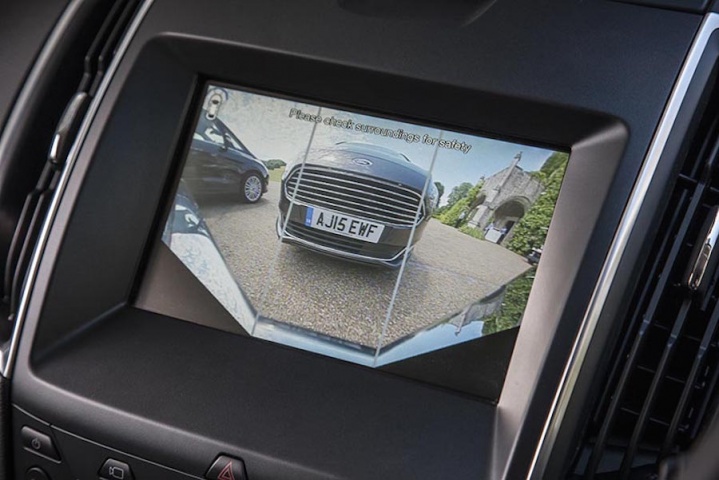 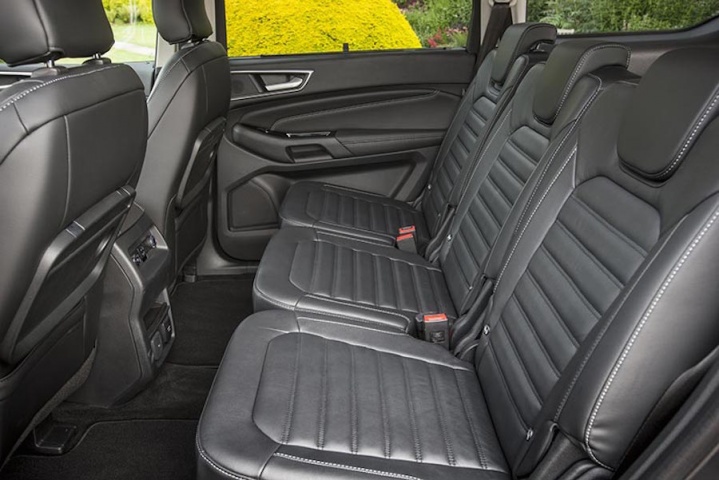 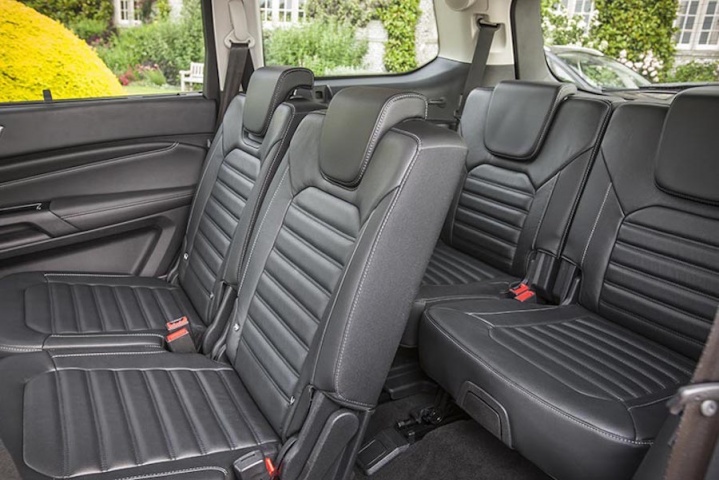 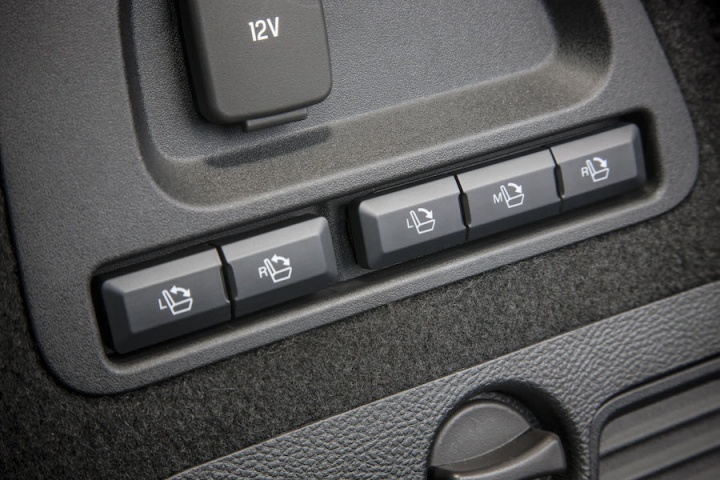 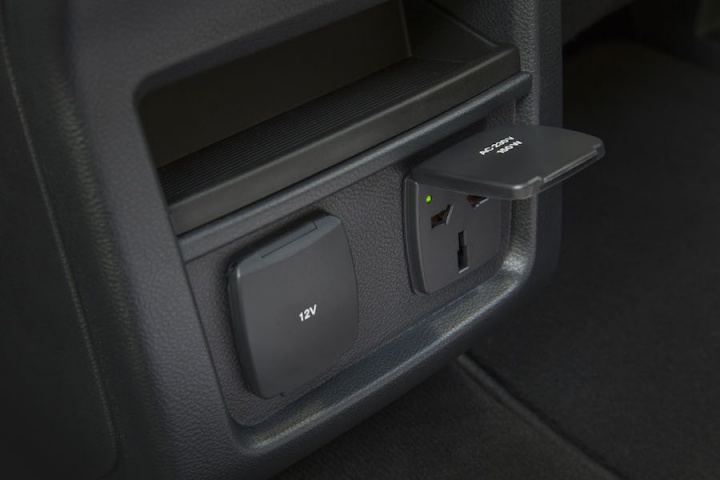 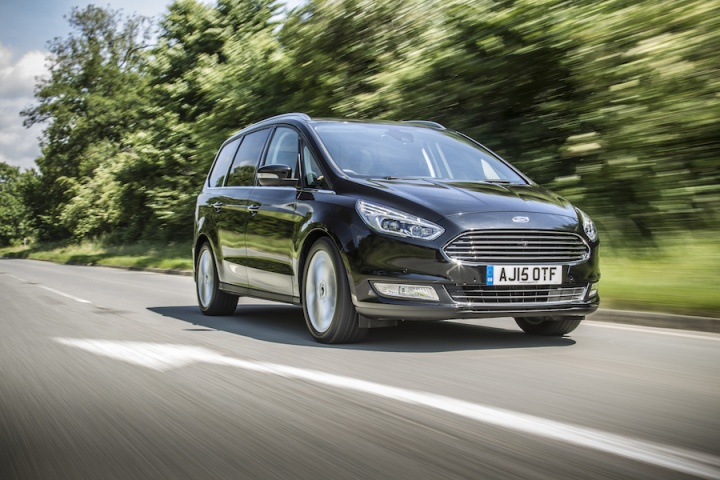 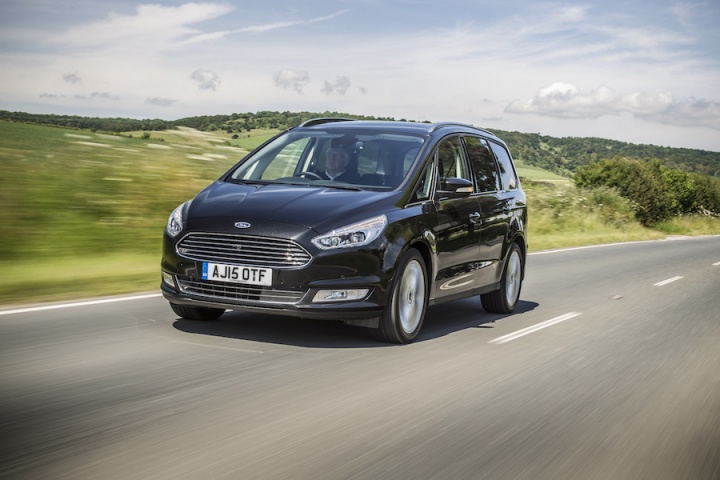 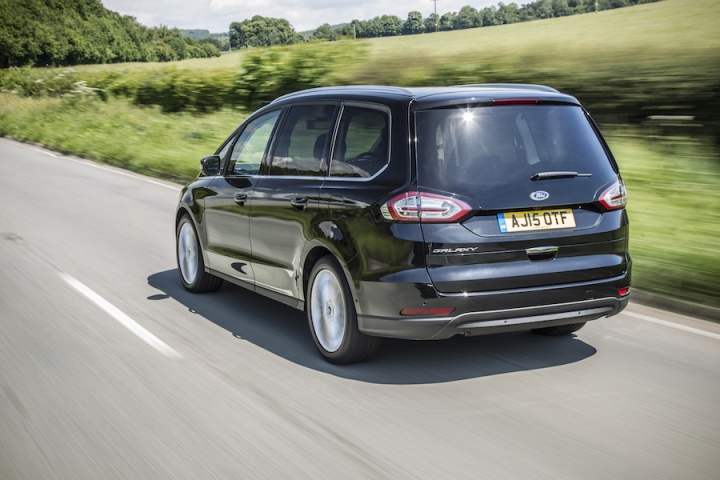 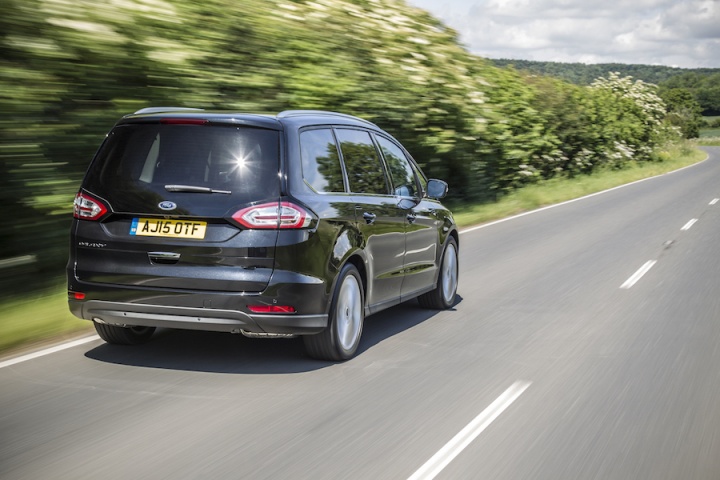 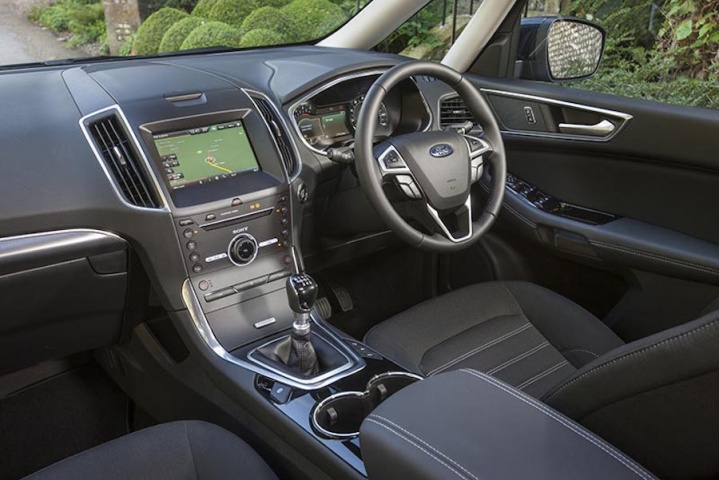 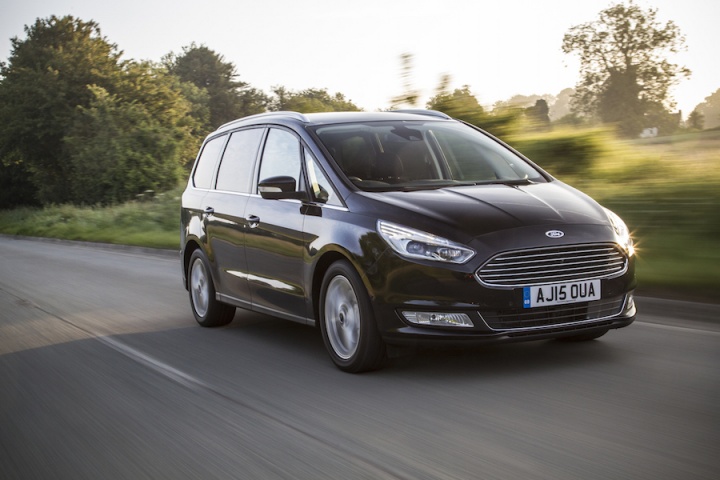 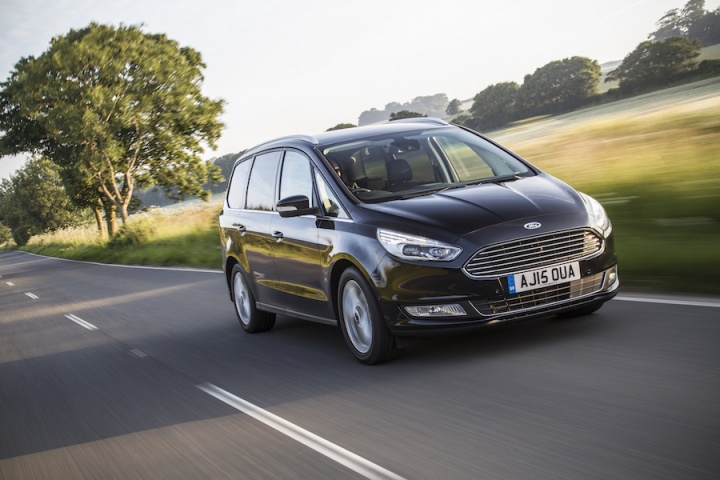 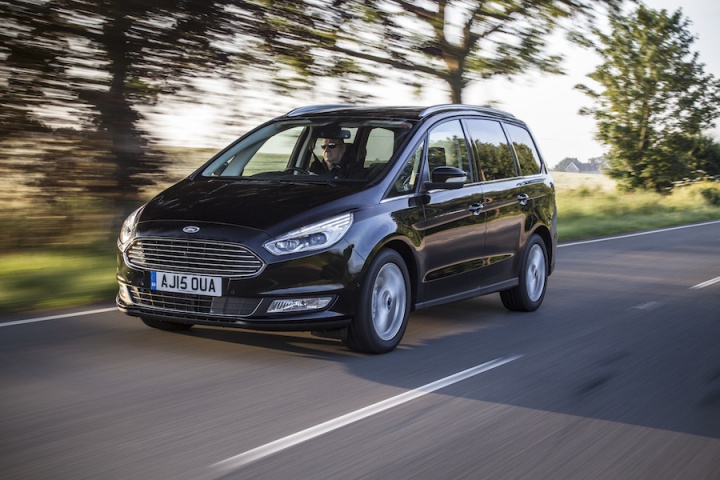 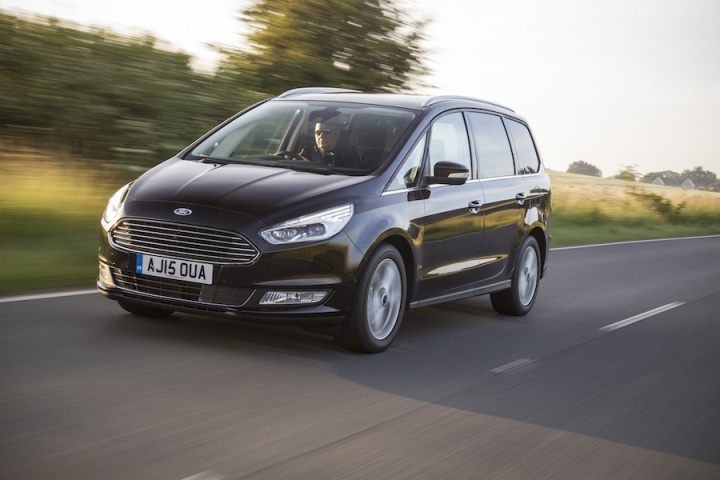 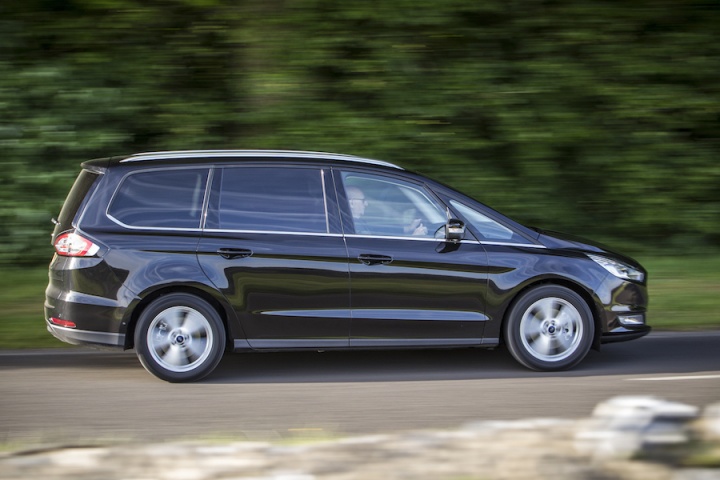 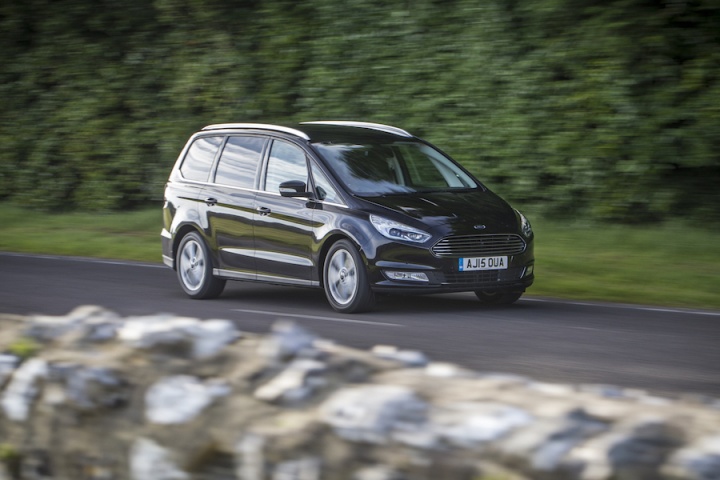 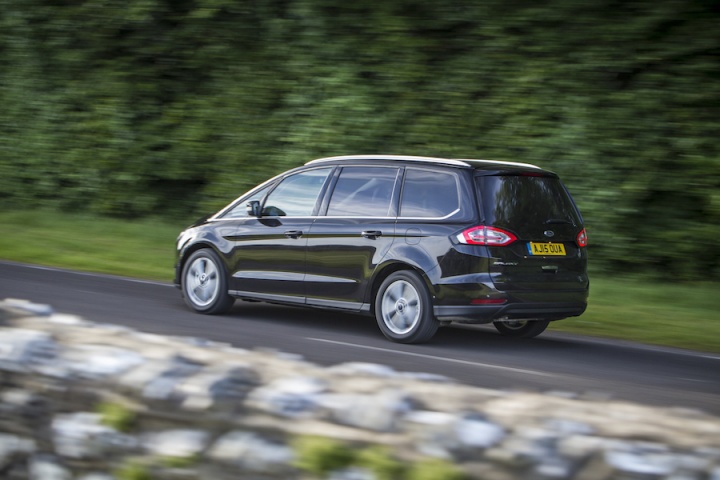 The new Ford Galaxy adds space and refinement to the large MPV segment.

The all-new Ford Galaxy is the largest in the range of MPVs offered by the Blue Oval. Its roomy cabin offers plenty of space and versatility but also faces increasing levels of competition. However, the new Galaxy raises Ford's quality and refinement levels once more.

It is well known that the most efficient use of space is a box and at first glance, Ford's designers have taken this on-board in their approach to the new Galaxy. The new car does benefit, however, from the use of Ford's latest design language, most notably the larger trapezoidal grille and sleeker headlight units. Its windscreen is vast and combined with thinner A-pillars offers a good field of view from the driver's seat especially when pulling out of junctions. Further back the car is very much styled by function, but does now have larger glazed areas that allow for mostly unobstructed views for passengers while also adding to the feeling of spaciousness inside. From Zetec specification upwards, the Galaxy also features solar tinted glass, which helps to keep the interior cooler on warmer days. The high roofline means that the boot lid is quite large and doesn't lend itself well to use in confined car park spaces and although the doors are generously sized the fact that they are conventional rather than sliding doors in the rear may put some people off.

The interior is more evolutionary than revolutionary, the biggest change being a more premium look and feel through the use of improved materials. It could benefit further from an injection of some colour accents though, as the large expanse of black is only broken up by small strips of aluminium-look material around the gear selector and dashboard instrument binnacle. The large colour SYNC touchscreen makes for a cleaner looking centre console but this remains an optional extra. In general, the driving position is good but the front seats don't provide as much comfort or support as they could. In the back, there is good space for all passengers and even the two rear-most seats are adequate for accommodating adult passengers. Access to these is good and when they aren't in use can be folded flat to give the Galaxy a larger boot. Buyers can also electrically raise or lower the two third-row seats via a control panel just inside the boot - a first for the segment, if optional. If you have the need for carrying even larger cargo then the middle row of seats can also be folded flat giving the Galaxy a flat floor that effectively transforms it into a van.

Naturally, the reasons for buying a Ford Galaxy are more down to the requirement to transport people and luggage rather than setting personal best times to work each day. There's little danger of the latter happening anyway as Ford's 2.0-litre TDCi diesel engine feels to be tuned more for economy than performance. It's a well-insulated engine with most of its din kept outside the cabin thanks to increased levels of sound deadening material in the floor and wheelarch linings. Ford is offering this engine in three different power outputs starting with 120hp, 150hp and an automatic-only 180hp variant, but if you regularly carry a few passengers and/or big loads, it is the latter two engines that you should be considering. In all cases, peak power doesn't arrive until 3,500rpm meaning that it feels sluggish around town and even though the six-speed manual gearbox is slick, you tend to find yourself changing gear a lot. The automatic transmission makes the Galaxy a much nicer car to drive. If petrol is more your kind of thing you can specify a 160hp 1.5-litre EcoBoost engine.

On most roads, the Galaxy feels well settled with less body roll through the corners than you might expect. It doesn't feel quite as surefooted as the Ford S-Max when pushed a bit harder even though it shares the same chassis, but in reality, few will ever do so in this car. What the Galaxy does best is comfortably convey its occupants from point to point. From the passenger's perspective there is little to complain about as space and comfort are in abundance. Headroom in the back has been improved upon slightly compared with the previous Galaxy while the third row feels like proper full-sized seats rather than an extra two for short trips. For those keener to ensure on-road stability Ford is also offering an all-wheel drive system.

Ford has also developed a number of driver assistance systems to help including a useful Intelligent Speed Limiter system that uses on-board cameras to detect and read road signs and therefore reduce the car's speed when cruise control is in use to prevent it from travelling too fast when it enters a new speed limit zone. Edging out of junctions can also be made easier thanks to the option of a 180-degree camera mounted in the front of the car's grille. This relays a real-time image of what might be approaching from either side.

There will be two specification grades offered in the Galaxy, Zetec and Titanium. Buyers of the Zetec model get a reasonably good range of standard items such as 17-inch alloy wheels, heated windscreen (great for speedy defrosting on winter mornings), solar tinted glass, front and rear parking sensors along with a leather-covered multifunction steering wheel and gear selector - for the majority of buyers that simply need a big, spacious family car this specification will be most suitable.

For those keener to have some more technology in their car the Titanium specification adds the Intelligent Speed Limiter and a Lane-Keeping Aid that alerts the driver should they begin to drift out of their lane. Titanium buyers will also get roof rack side rails, rain-sensing automatic wipers and headlights with an automatic high beam setting. Somewhat annoyingly Ford continues to only offer the SYNC 2 voice-operated infotainment system as an optional extra regardless of trim despite the obvious safety advantages.

The Ford Galaxy offers good levels of space inside irrespective of what seat you are in. On the move, it is quieter than before and does feel more refined though the automatic transmission makes it that bit better. The styling is demure in comparison to the more interesting Citroen Grand C4 Picasso, especially when it comes to interior design, but the Galaxy is more about the real-world practicalities of which it has many. Above all else, Ford's new seven-seater feels like it is more than capable of handling everything that everyday family life has to throw at it. 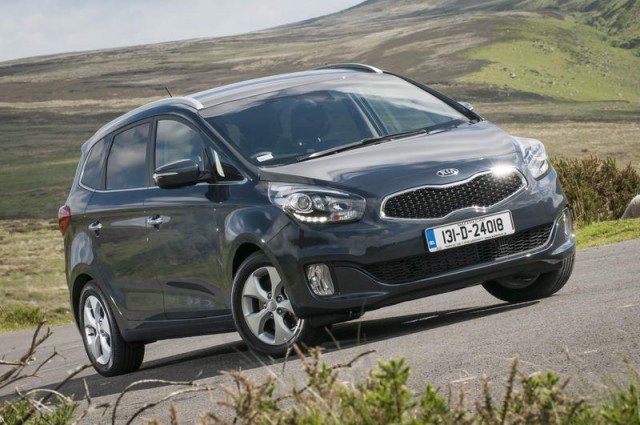 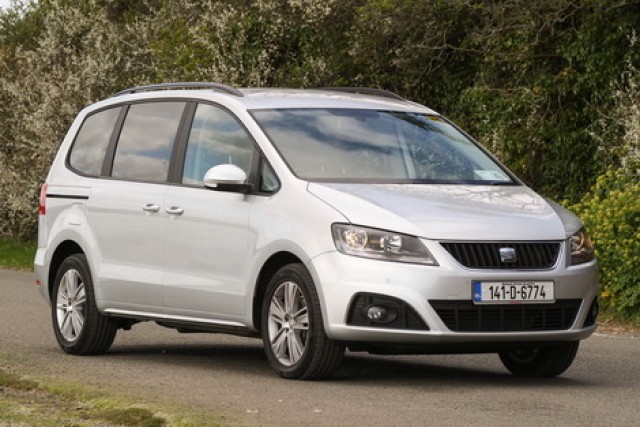 SEAT Alhambra review
SEAT Alhambra vs. Ford Galaxy: not as spacious, but benefits from sliding side doors and keen pricing.