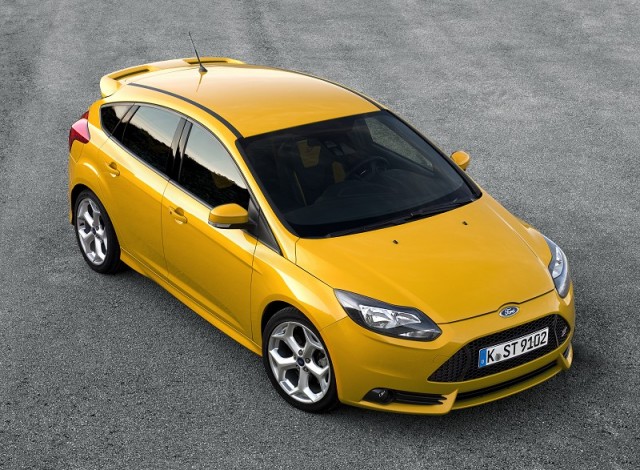 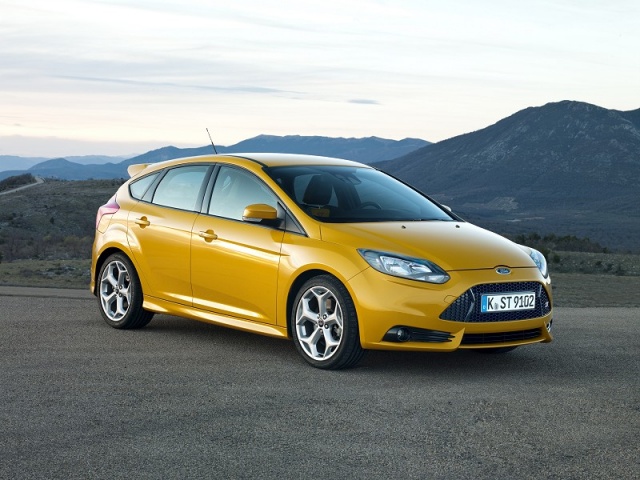 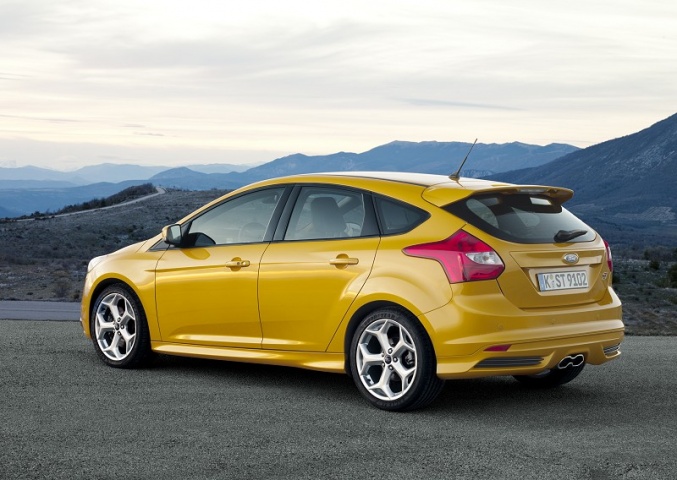 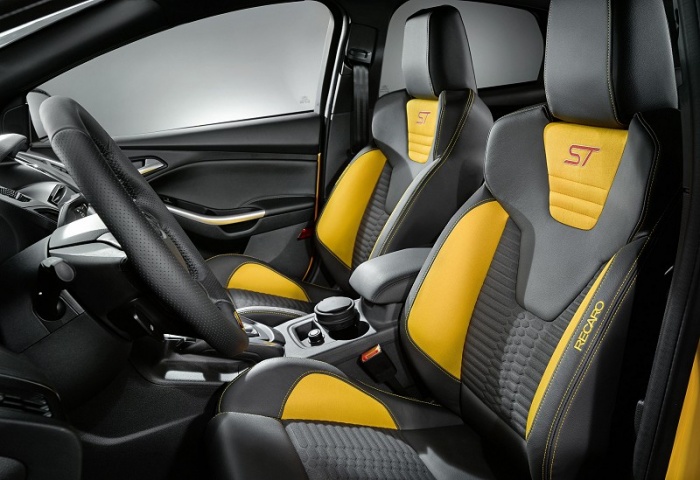 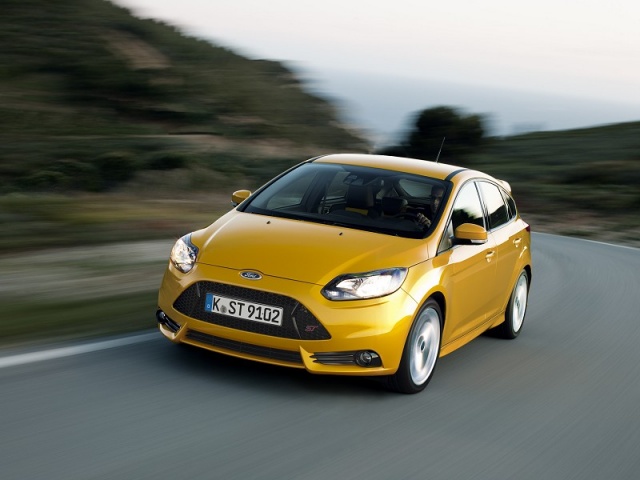 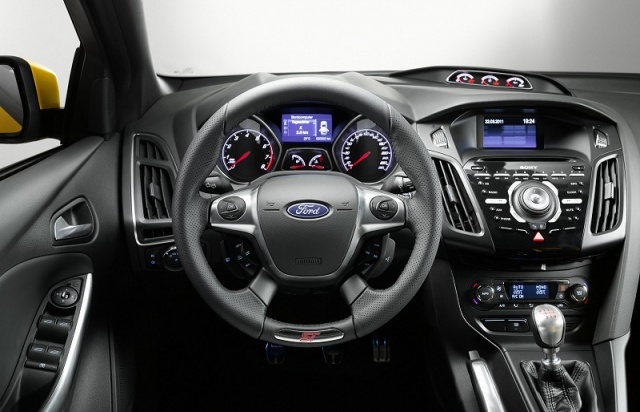 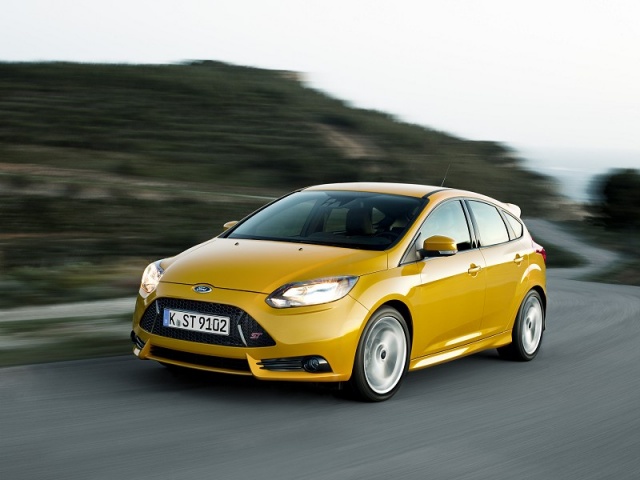 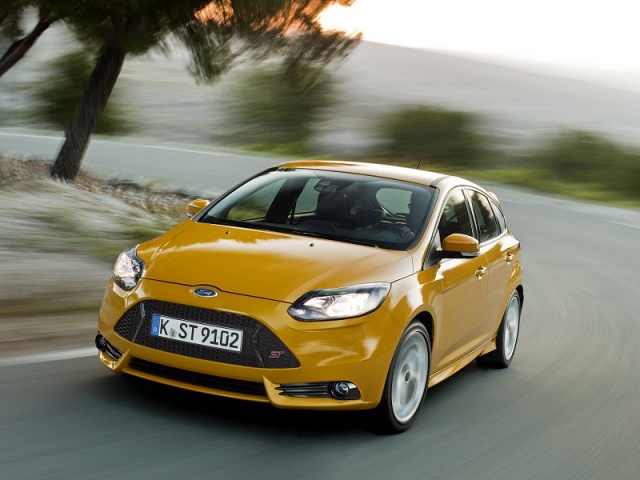 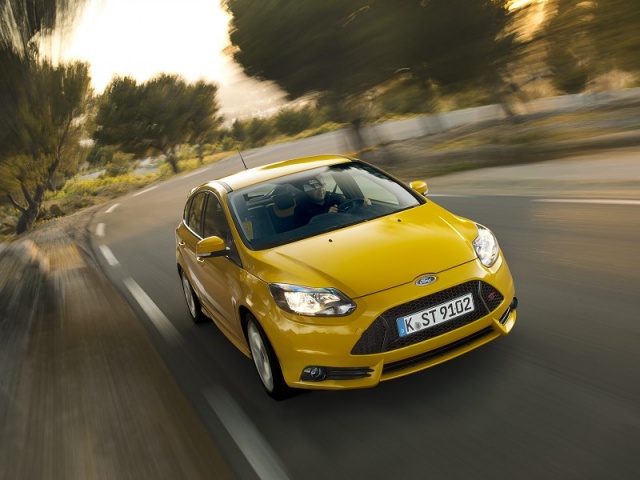 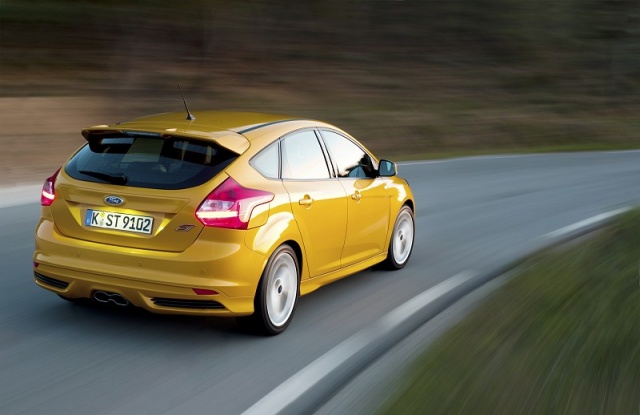 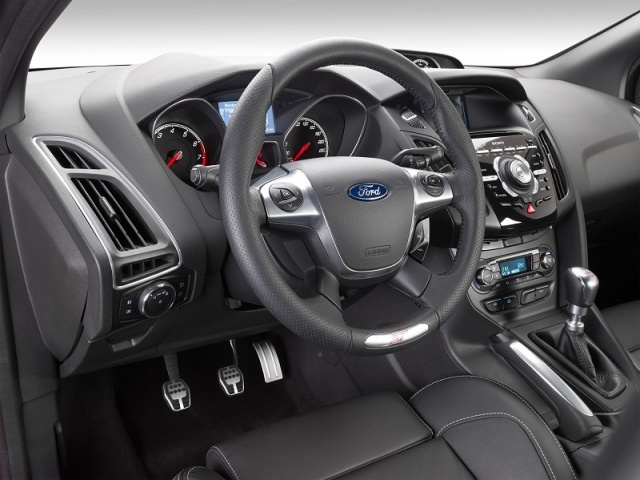 We've driven the new Ford Focus ST - simply one of the best performance cars of the year.

Even if you ignore the €1,500 price advantage the Focus ST has over the base five-door Golf GTI, it's a compelling combination of high performance, engaging dynamics and everyday usability.

You can go one of two ways in the Focus ST. Choose the 'Tangerine Scream' paintwork pictured here for maximum attention or opt for one of the more subtle hues to make less of a statement. Either way the exterior changes that make up the ST are highly effective, differentiating it from the regular Focus hatchback. The massive air intake at the front dominates the face, which is defined neatly by the shape of the front spoiler, which visually leads up into the bonnet. Side skirts, a 10mm lower ride height and cracking 18-inch alloys are found in profile, while the rear end features a roof spoiler, a sportier bumper and a central-exit exhaust with a highly distinctive outlet - said to be styled after one of the spaceships in Star Wars...

It's an effective transformation, distancing the ST from the normal Focus without screaming as loudly about its performance as the RS did.

Inside, the changes are also subtle. The steering wheel, gear lever and pedals are all very close in design to items found in the regular car, though they are tweaked for the ST, while a trio of extra gauges sit atop the dashboard in a slim new housing. The most successful aspect of the cabin is the fitment of a pair of bespoke Recaro sports seats up front. They offer loads of adjustment, allowing you to sit relatively low, and have plenty of side support.

The ingredients that make up the Focus ST are not highly exotic, but mixed together they produce one of the best performance cars of the year. That lower ride height sets the tone by reducing the centre of gravity, while the suspension components themselves are optimised for body control. The result is flat, confident cornering with a degree of adjustability on the throttle and brakes. The latter are perfectly modulated and were not fazed by repeated stops on twisty mountain roads. Ford relies on electronics and the brakes to control torque and stability rather than fitting a mechanical limited slip differential and it seems to work seamlessly enough - in the dry at least.

Under the bonnet is a 250hp version of Ford's 2.0-litre EcoBoost engine, but it's the low- to mid-range torque that truly defines this engine. You soon discover that third gear can be used where you'd usually select second. Supporting this strategy is the sound symposer (see 'Worth Noting' below for more details), which ensures that the engine sounds good without the need to chase the redline. Naturally you'll still do that and the soft limiter arrives with surprising speed. Thankfully the gearchange is swift, and there's no apparent dead spot in the engine's delivery.

The steering is ultra direct, yet manages not to be nervous on initial turn in, which is a great achievement (again, see more in 'Worth Noting' below), meaning the ST is civil and as easy to drive as a regular Focus as it is exciting when that's what you're looking for. Backing this up further is a wonderful suppleness to the chassis, which will ensure that buyers won't be alienated by an uncompromising ride. It really is a fabulous set-up, offering everyday usability alongside engaging dynamics. There's no doubt it's a car you'd take out to drive for the sake of it, yet it can do the whole family thing too.

A single starting price has been released by Ford of Ireland and €35,170 isn't bad. It's about €1,500 less than the five-door Golf GTI with which it competes. The Focus ST sits in Band D for road tax so it's not cheap to run, though that's unlikely to be too important to the target audience. In fairness, the new car is 20 per cent more efficient than the five-cylinder model of old.

Detailed specifications have not yet been released, but we do know that all versions of the Focus ST sold in Ireland will come equipped with 18-inch alloys, Bluetooth, Recaro sports seats and keyless start. Sadly, the estate model will not be offered for sale on the Irish market.

As mentioned above, the sound the ST makes stands out - as does the steering system. The former is thanks in no small part to a sound symposer. Ford was acutely aware that its previous hot Focus made a distinctive five-cylinder growl, which would be difficult to emulate with a four-cylinder engine. To produce the characteristic off-beat intake noise, a pipe channels sound towards the cabin from an offset part of the inlet manifold, with a valve ensuring that it only happens on acceleration. The effect is pronounced and highly distinctive.

The steering came in for just as much attention. It's still an electronic power assisted system, though it features torque steer compensation and it's far more direct than any other Focus. Along with that the ratio is not linear, so the wheels turn further for a given input the more you move away from straight ahead. It feels completely natural yet gives a sensation of increased agility.

Ford's new Focus ST stays true to the remit for that badge. While offering a truly engaging driving experience it manages to remain refined and civil in everyday use - and it's not at all uncomfortable. Items like the sound symposer and trick steering could have been pointless gimmicks, but they manage to enhance the car making it a real event to drive. It's undoubtedly one of the best hot hatches of the moment.