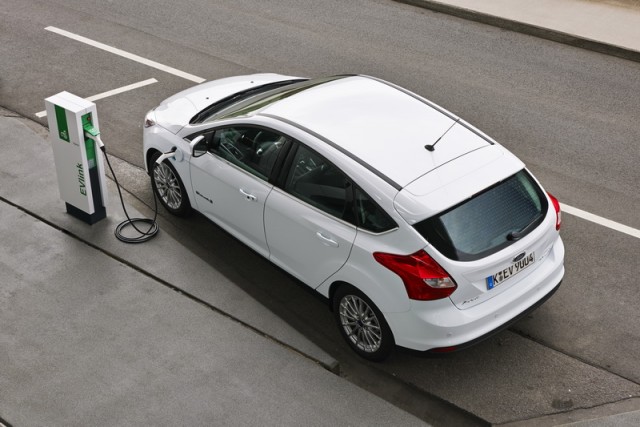 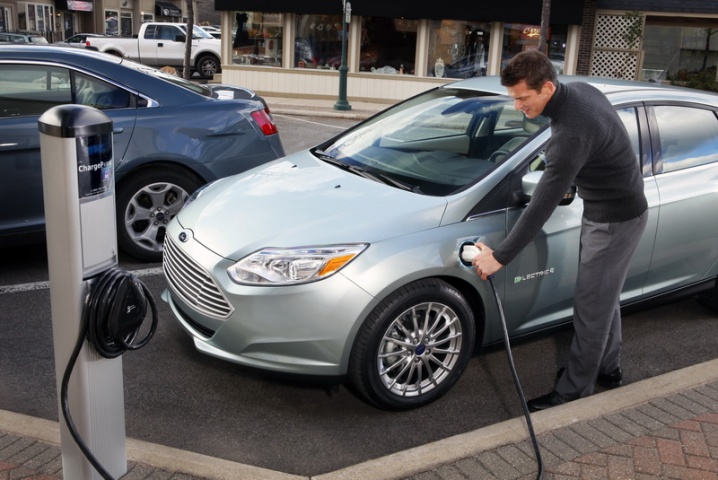 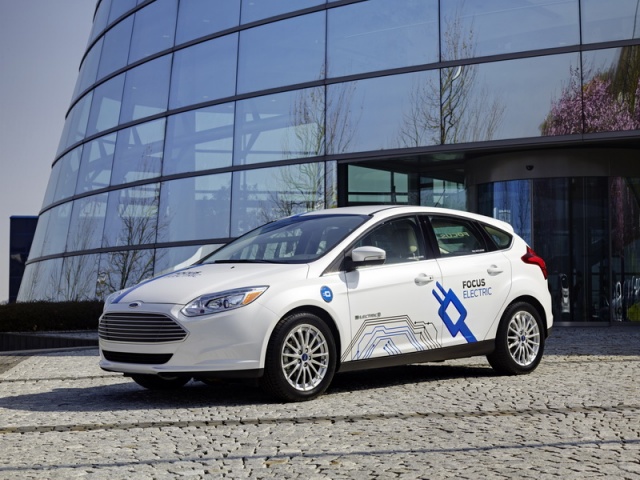 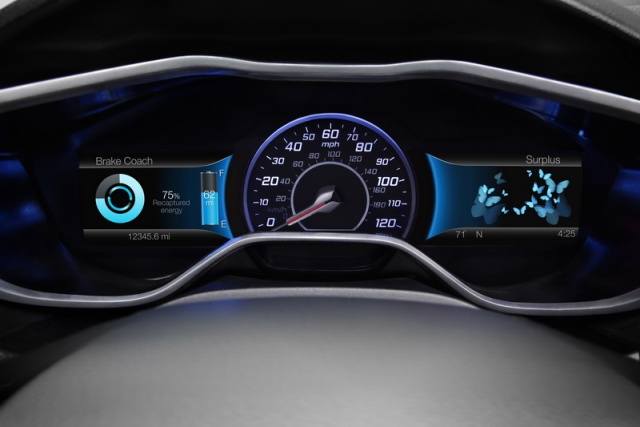 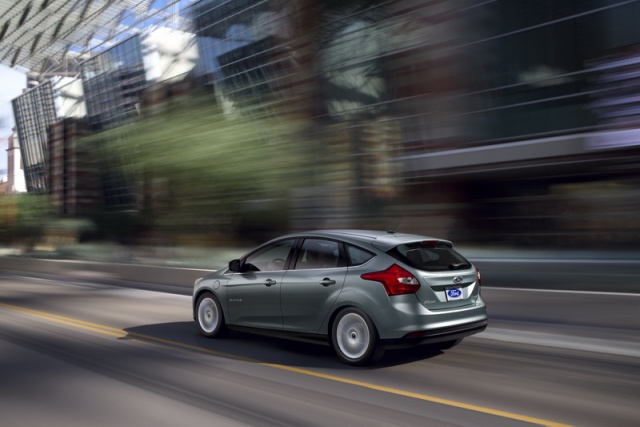 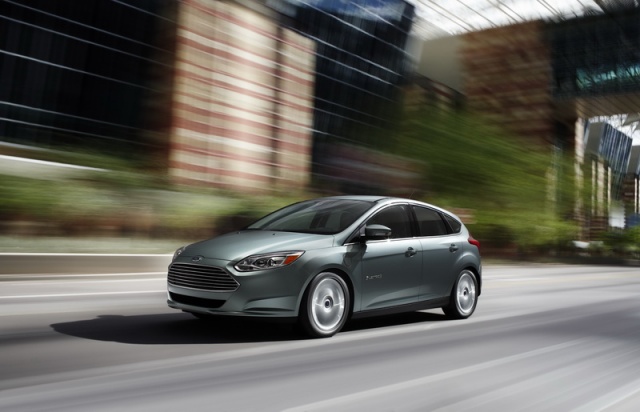 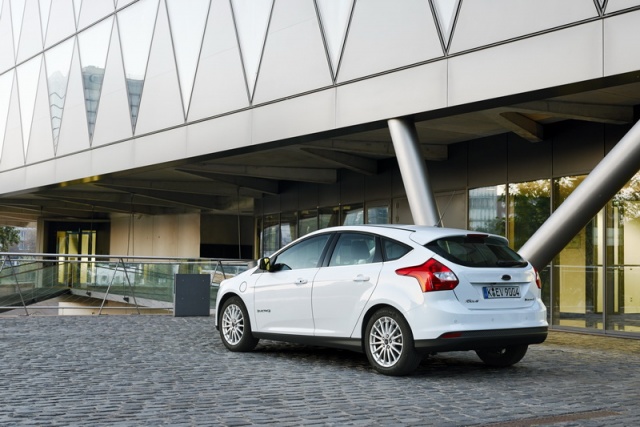 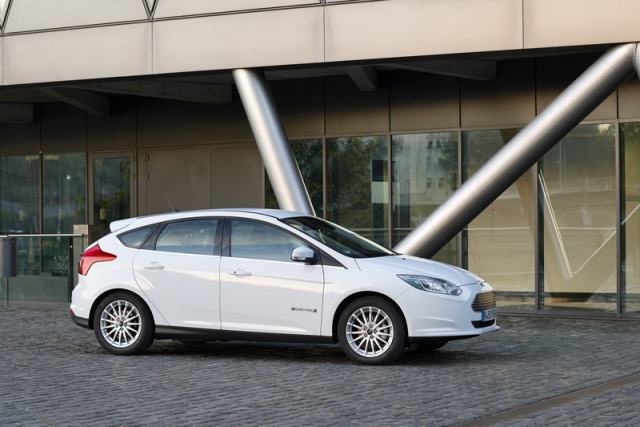 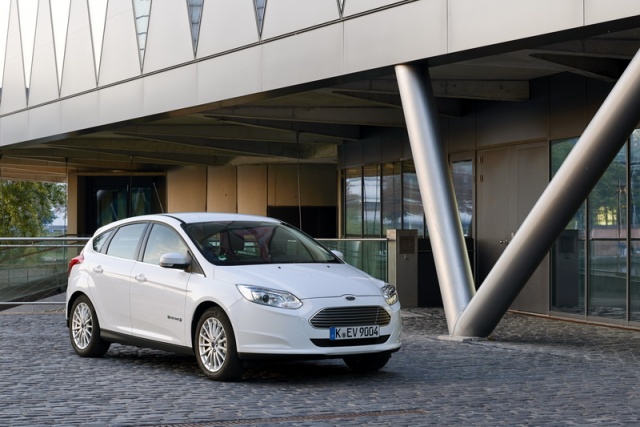 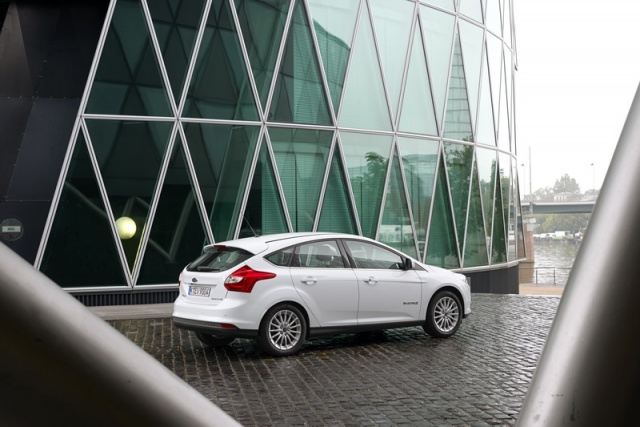 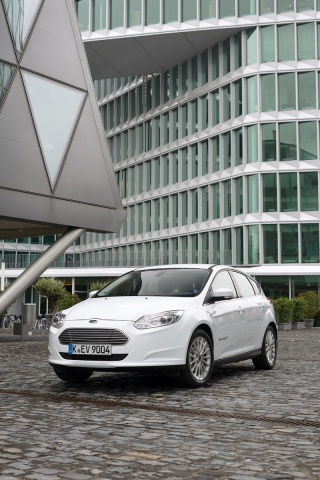 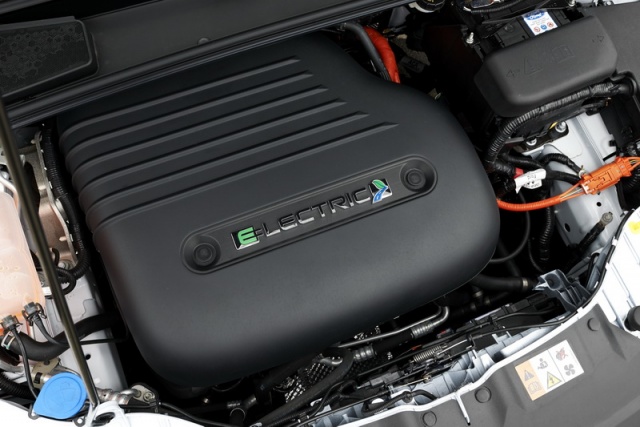 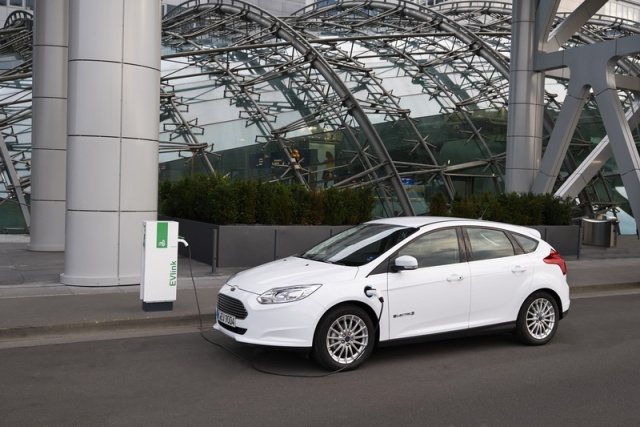 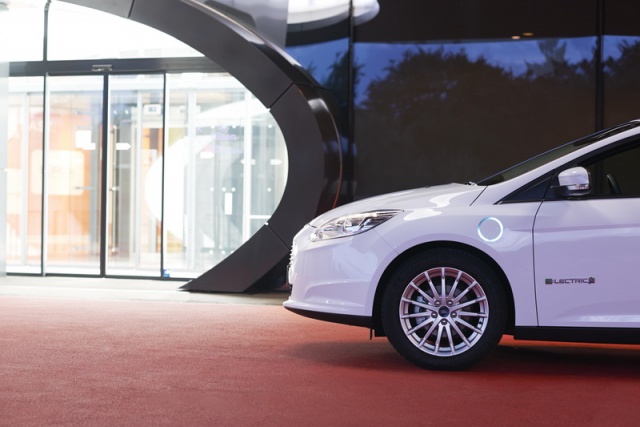 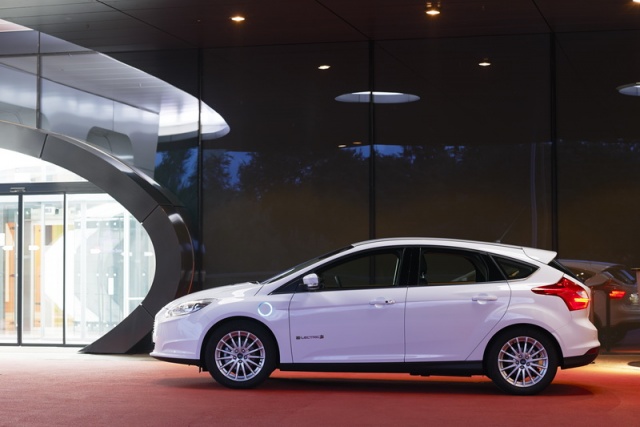 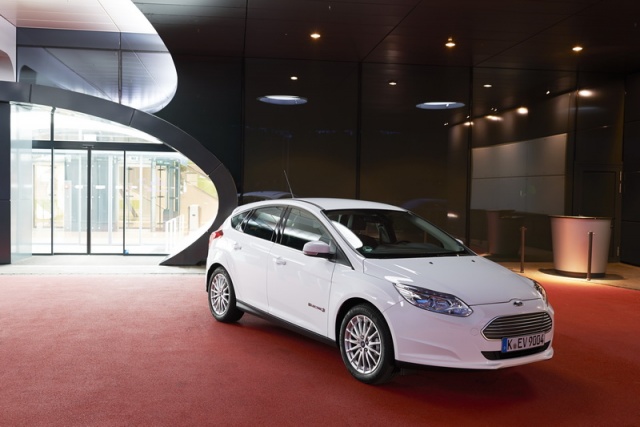 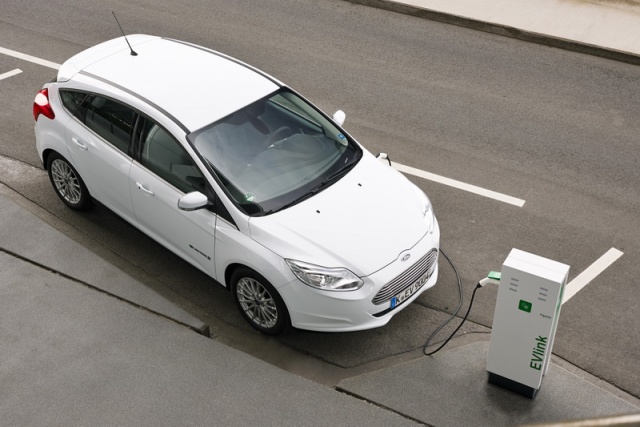 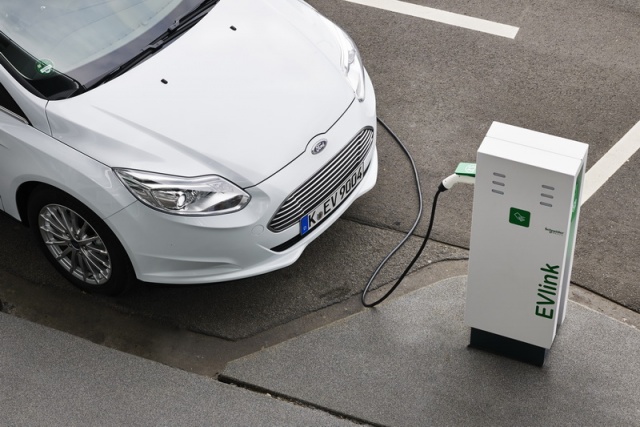 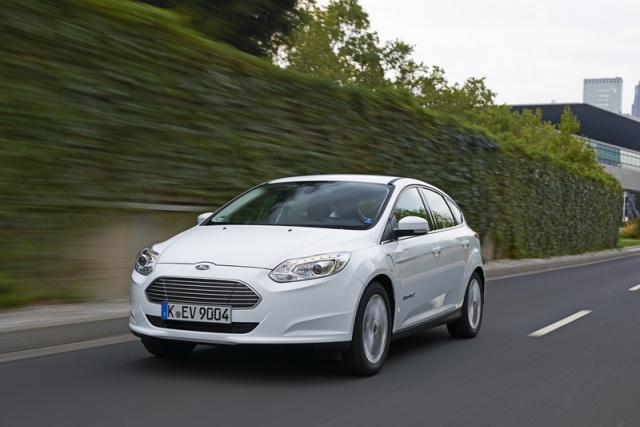 An all-electric version of the Ford Focus will arrive here in January; we travelled to Frankfurt to try it out.

The Ford Focus Electric again shows that, while not financially beneficial, an electric car works best when it was designed from the outset to be electric rather than modifying a petrol or diesel platform to accept electric propulsion. The all-electric Focus is conventional in looks and appeal but is too compromised from both a practicality and driving point of view.

As this stage we are all familiar with the shape and style of the Ford Focus; it has been one of the top-selling cars in Ireland since the day it was launched and even the shortest journey is not complete without coming across at least one of the popular hatchbacks. To that end we must congratulate Ford for not tinkering with the look of the basic car in designing the Focus Electric. Save for a front end revision and a smattering of applicable badges the EV variant looks the same as the Focus parked on your neighbour's driveway.

While so called 'early adopters' may have been happy to take the wacky styling, both exterior and interior, of early electric cars, those who just want to get from A to B efficiently do not necessarily need a car that screams, as Robert Llewelyn - actor and electric car evangelist - so eloquently put it "Look at me and my tofu eating, sandal wearing electric car!"

It is a similar story inside. Save for dials in the binnacle that displays more butterflies the more efficiently you drive it may as well be an automatic Focus. Same basic dashboard, same seats, same switches for the electric windows. It is familiar and if manufacturers are to turn more buyers onto electric familiarity this strategy will certainly help.

The only real clue that all is not as it seems, at least visually, is a boot that is 130 litres smaller than that of a standard five-door Focus' due to the positioning of the liquid cooled lithium-ion batteries. Familiar but not exactly family friendly then...

Prod the starter button, select 'D' on the gear selector and away you waft in silence. Like all electric vehicles the Focus Electric delivers its torque instantaneously so it can hitch up its skirt and move quickly. Top speed is limited to 137km/h as any higher would deplete the battery in moments but we did run at motorway speeds for ten minutes, losing only 30 kilometres from our projected 160km range - 10 of which were regained by generative braking as we worked our way through Frankfurt city. Ordinarily we would be cynical of manufacturer quoted ranges but we suspect 160 kilometres is achievable, as long as you are not driving too exuberantly.

And frankly you are not encouraged to. Accelerate too aggressively (to merge with stream of traffic on the motorway for example) and the single-speed transmission spins wildly, creating a din not too dissimilar to throwing cutlery into a food blender. Then there is the weight of the batteries to contend with. Ford says the Focus platform was always designed with alternative power sources in mind, but the truth is that the petrol and diesel models come first and electric or hybrid later so the platform has not been optimised. This is evident with the batteries encroaching into the boot space, but also in the way the car drives - it is rear heavy and the centre of gravity feels higher too. The renowned Focus handling prowess is gone to be replaced by an unsettled drive. Not unsettled in the sense that it feels dangerous, just compromised. The ride is also harsh due presumably to the added weight, meaning every minor imperfection in the road is felt as either a crash, bang or wallop in the cabin. Admittedly our test cars were American specification so that may all change when the Focus Electric arrives here.

The Ford Focus Electric will arrive in dealer showrooms from January of next year (just in time to take on the Volkswagen e-Golf) so prices and Irish specifications are yet to be set. On the continent, where the car is already on sale, prices start from €39,900 so, factoring in VRT and a government rebate, a figure of circa €43,000 does not seem too wide of the mark. Considering BMW will charge the same for a small electric city car that does not seem too bad until you remember both Nissan and Renault will sell you electric cars (albeit with monthly battery leases in the latter case) for €20,000 less.

Believe it or not but Ford is the second biggest electric/hybrid manufacturer in the world, behind Toyota. Over 270,000 alternative power Fords are on the road worldwide with most of those in the US where hybrids are the car of choice for the eco-conscious rather than diesel. It is for that exact reason that it has taken so long for these cars to arrive on this side of the world - diesel efficiency has been so good. However, with Euro 6 legislation set to make diesel engines more complicated and expensive the price gap looks set to narrow.

To some extents the Focus is Ireland's favourite son so in theory it is the ideal car to head up Ford's electric future in Ireland, but, range anxiety aside, it is too compromised. The small boot means it will not appeal to family buyers and singletons in the market for an electric car are likely to be drawn to the propeller badge of the similarly priced BMW i3. The ride, which was annoying on smooth German city streets, is likely to knock a tooth out at the first sight of Irish roads, but worst of all the Focus Electric has lost its Focus-ness.