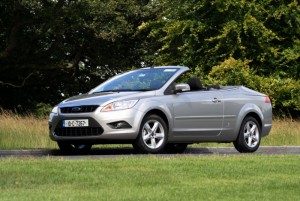 Ford will still sell you a Coupé-Cabriolet version of the Focus, but it's getting on.

As the summer is already coming to an end we thought we better hurry up and drive a few convertibles. The Focus Coupé-Cabriolet - as the name suggests - is one of the current crop that has a folding hard top, so it theoretically offers the best of both worlds. Should be ideally suited to Irish weather then...

There's an all-new Focus arriving in 2011 so no doubt this version will be replaced completely within a couple of years. I've never been a fan of the look of the open version. Like many folding hard tops it is saddled with a big rear end, as the substantial roof needs somewhere to hide. It looks better with the roof down than up in my opinion.

The car market has significantly moved on since this generation of the Focus was launched. While the CC's interior is well built and of high quality, it's a little dull to look at and the materials are not very tactile. Thankfully the switchgear is and it's all logically laid out.

Despite there being plenty of folding hard tops on the market, it's always mesmerising to watch one of them drop the roof. The Ford's system is as balletic as any other and noticeably solid. With the roof down the windscreen and pillars still cover a fair proportion of the front of the cabin so wind buffeting is kept well at bay.

Rear passengers don't fare so well, in terms of buffeting and legroom, but that's standard for all examples of coupé-cabriolets.

While the boot is a decent size if the roof is up (504 litres), there isn't really enough storage for bits and pieces inside the car. The glovebox is lockable though, which is useful if you plan to leave the car parked with its roof down.

Our test car was the entry-level model, powered by a 1.6-litre petrol engine. It's commendably quiet in operation and refined, though really lacking in sparkle. If you plan on driving longer distances it's probably worth investing in the 2.0-litre TDCi turbodiesel for the performance gain alone. That model will be cheaper to fuel too, but you pay a €5,000 premium for the least expensive diesel so it'll take a while to claw back that difference, especially as the both reside in the same tax band (D).

Whatever about the lacklustre performance, the Focus' chassis is pretty good. Admittedly there's noticeable flex in the body, but the damping is spot on. It's perfectly suited to a life in and around town, handling speed bumps well and generally being quite comfortable.

We didn't venture far away from Dublin and its suburbs this week, so fuel consumption of 11 litres/100km is probably not too representative of the CC's capabilities on the open road.

Rivals include the much newer Renault Mégane Coupé-Cabriolet, the Peugeot 308 CC and the Volkswagen Eos. The Renault and Peugeot are priced in line with the entry-level Focus, but they offer more enticing diesel engines, while the VW is more expensive, but feels worth the extra.

No doubt the next generation Focus CC will stand up to comparison to rivals a little better.