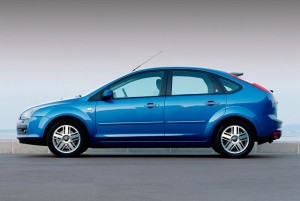 Ford demonstrates once again that family motoring and fun are not mutually exclusive.

Success usually happens for a very good reason and the Ford Focus has been Ireland's best selling model for a decade. With the Focus, Ford has ably demonstrated that many buyers - and we're talking about a consistent best-seller here don't forget - want a good product at a good price.

But don't let that fool you into believing that the Focus or its ilk is sub-standard; in fact in the case of the Focus it's quite the opposite. If anything, the shift of buyers from mainstream to premium has made sure mainstream brands have had to fight hard to retain their customers.

This market doesn't sit still though, and while rivals might not yet have caught up with Ford dynamically, many had the Ford licked for style. High street buyers are just as style conscious as the next person. So, sensibly, Ford has restyled its Focus for 2008, the visual makeover pretty subtle in detail but very effective as a whole. There's a new line down its flanks that adds some tension to its profile, the headlamps are completely new and the surround, bonnet and grille are all re-profiled. The changes around the back again aren't so obvious at first glance, but look closer and there's a bulge on the boot lid where it was previously featureless.

Inside the Focus Ford has busied itself by tidying up the controls and instruments. The effect is hardly radical, but everything's neat and easy to use and there's more equipment. Perhaps most significant on the kit front is Ford's decision to fit ESP as standard across the range, statistics suggesting that Electronic Stability Programmes are a significant benefit to road safety. The Focus is as spacious as it ever was, meaning a huge boot and decent passenger room front and rear. So the new Focus is smarter, better equipped, greener and still the best in class to drive, too. Little wonder then it remains so popular.

Ford now don't offer any standard petrol versions of the Focus, just 90bhp 1.6-litre and 110bhp 2.0-litre diesels. The 2.0-litre diesel only comes with an automatic transmission. The high-performance ST, with its 225bhp 2.5-litre turbocharged five-cylinder unit, remains a good hot hatch but now at the top of the range is the storming 300bhp RS version, which isn't bad value either.

Most buyers will choose one of the two diesels and it's not just the extra fuel economy and low emissions that appeals with the diesels, but the way they drive. It's the torque that makes the difference, the easy low-rev urgency of the turbodiesel engines suiting the flow of the Focus.

Specification levels consist of Style, Zetec and Titanium and even in the Style models you get air conditioning, alloy wheels and Bluetooth mobile phone preparation.

The combination of detail changes is highly effective, the Focus retaining its solid (obviously Focus) look, but adding a touch of athleticism that was absent from the previous car. With the Focus always topping the class with regards to driver dynamics, that's no bad thing. Really, for a mere 'ordinary' family hatchback it possesses the unusual quality of feel and feedback, meaning everyone driving it, even those unconcerned or deriving little pleasure from the act of driving, is animated in their response.

It's those intangible details like the accuracy, weighting and feel from the steering that help make it so enjoyable. That and the suspension's unusually good ability to both isolate poor road surfaces and provide supreme body control, yet deliver enough information through the seat of the pants to imbue the driver with the sort of information usually denied in a car in this class. The gearshift slips though its gate with slick precision and decent weighting; the clutch, brake and accelerator pedals are all nicely spaced and operate well together too.

All that makes the Focus a pleasurable car to drive. Not just on those occasions when you drive for the hell of it, but every day. The engine line-up of the new car largely follows that of the previous model, but with the environment in mind though Ford has worked on reducing CO2 and improving economy. So every 1.6-litre TDCi Focus achieves a Band A emissions rating and annual road tax of just €104 per year.

The Focus has been Ireland's best-selling car for the last decade.

The original Focus demonstrated this with class-leading dynamics, its successor cementing the Focus as the choice for those wanting to enjoy their daily driver. Unsurprisingly, the new one's just the same, driving with such fluidity and precision you really have to wonder why you'd want - or need - anything else. Prices start from €21,015.