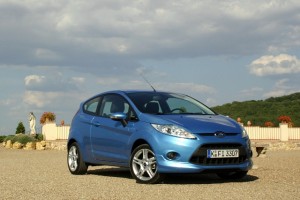 The Ford Fiesta has been a best seller in Ireland for decades, so a new one was always going to be a big deal for the company.

The Ford Fiesta has been a best seller in Ireland for decades, so a new one was always going to be a big deal for the company. Since it arrived here in early 2009 the new Fiesta has been a huge success. The supermini marketplace a far busier place for this sixth generation car compared to the very first model, so the Fiesta has to be very good indeed. Ford has consistently over-delivered with its Fiesta and this new model is no different, bringing big car feel to the supermini market.

Martin Smith, Ford's Executive Director of Design describes the new Fiesta as "the most expressive definition of Ford's kinetic design to date". There's no denying the familiar links with more recent Ford models, from the trapezoidal lower grille to the upswept rear side windows and bold feature lines on its flanks. There's a real solidity to the Fiesta's design in either three- or five-door models, Ford paying particular attention to pedestrian impact regulations; these are partly responsible for the clamshell styled bonnet. It's a good looking car, that's got a solid, substantial style to it without looking heavy; in fact it's actually around 40kg lighter than the old model.

Ford describes the Fiesta as its smallest big car and hopes to tap into people downsizing from larger cars due to environmental and economic concerns, something which is increasingly relevant in recession-hit Ireland. Ensuring such buyers don't feel short-changed is a supermini that does indeed have a big car feel. Inside it's light and airy - helped no end by the slim A-pillars on the windscreen - while the materials on the cool dashboard and fascia are a class above the supermini norm.

Ford offers the Fiesta with equipment that you'd normally associate with bigger cars; a USB port, aux-in socket and even ambient interior lighting are all available, items that are relatively new to the class. As ever there's a good range of engine and specification choices: there are three trim levels with a line-up of engines encompassing petrol and diesel units from 1.25- to 1.6-litres. Ford claims that, thanks to high projected residuals, lower insurance costs and improvements in economy and equipment levels, the new Fiesta is cheaper than ever to buy and run.

In recent years Fords have been the benchmark in their classes dynamically and the new Fiesta is no different. Despite its more mature, grown up feel inside and out, it still drives with real verve. The new electrical power steering is a touch light, but there's no denying that it's very measured to input. The Fiesta turns in with real sharpness, gripping tenaciously even if the bend tightens up unexpectedly. Over do it and the ESP system (if fitted, as it is a €570 option) helps gather things up neatly and unobtrusively, though so high are the Fiesta's thresholds it's highly unlikely that you'll ever see that tell-tale light flashing.

Body and roll control are exceptionally well judged, the Fiesta resisting roll doggedly in corners but riding with real composure. Performance from the 82bhp 1.25-litre petrol engine is quite willing, it revving keenly and delivering smooth acceleration all the way to the redline. Like the torque-rich and eager 1.4-litre turbodiesel, the 1.6-litre Zetec S petrol unit makes do with a five-speed manual, both feeling like they could use an extra cog. Even so, refinement is good in either, the Fiesta a supermini that's as comfortable around town as it is on the motorway.

Despite being only fractionally bigger than the old car, Ford has managed to cram more space inside the Fiesta. The boot looks significantly larger, though this has been achieved without sacrificing rear legroom.

The central infotainment controls are designed to operate just like your mobile phone might; if that's really the case Ford should have added a multi-colour display on the centre console rather than the red on black one.

The 1.4-litre diesel Fiesta is the only model that has Band A emissions of less than 120g/km. The 1.25- and 1.6-litre petrol engines have Band B emissions, with the 1.4-litre petrol automatic version residing in Band C.

Ford's Fiesta was always going to be good to drive, but the new car is a demonstration that Ford knows how to make more than just great drivers' cars. The Fiesta has a maturity that's unusual in the supermini class, it good enough to make you wonder why you'd need a Focus. With sensible pricing, decent equipment levels and an interior that's pretty much in a class of its own the Fiesta is a hugely appealing contender in the supermini segment, which should ensure it continues the massive success of the five versions that preceded it.