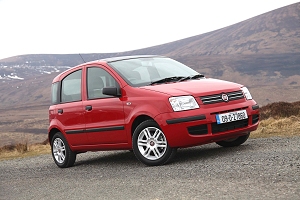 Picking up the Panda it's hard to believe that the little five-door hatch has been on sale since 2004. Fiat hasn't altered the exterior much and yet it doesn't really look out of date. Admittedly it is not as chic as the Fiat 500 (which is built on the same platform), but the styling is pretty ageless all the same.

First thing that strikes me as I jump in is just how upright the seating position is. That helps make more legroom though and it's a surprisingly spacious interior. Well, in terms of leg- and headroom anyway; it's a narrow car so shoulder room isn't too generous. The cabin feels durable, but the shiny plastics won't appeal to everyone.

Let's face it though; the Panda will be bought for its value above most other considerations. The entry-level model (1.1 Active Eco) can be had for as little as â‚¬6,995 if you've got a car to trade in on the scrappage scheme, while the 1.2 Dynamic Eco version tested here can be had for â‚¬7,995 when you take into consideration the scrappage scheme and Fiat's 'EcoPlus+ Bonus'.

Of course, you'd buy a much bigger second-hand car for the same money, but there are only a very few new cars that can be had for that much cash.

I fitted our child seat behind the passenger seat today. Way easier than it would be in a three-door car and as the Panda is quite tall and upright my son has a great view out the side window. The rear door opening is a little narrow, but surprisingly the front seat passenger doesn't have to compromise on legroom to avoid getting kicked in the back.

The boot, while hardly huge, just about accommodated the base of our Quinny Buzz buggy (if that means nothing to you, don't worry, your time will come too...), though the seat section had to put on the back seat of the car. This is fine for a quick trip to the playground or crÃ¨che, but the Panda wouldn't be ideal for carrying a load of luggage. That said, its official boot capacity (190 litres) is 30 litres more than the three-door MINI's.

Not that a comparison with the MINI is a realistic one. They're poles apart in concept and price for a start.

The Panda feels like a no nonsense car and it's fairly basic, though I find myself liking it, especially in an urban setting. Its tiny size makes it a breeze to park and squeeze through gaps in busy traffic - and the engine is pretty willing, if a little coarse.

There's a whole new range of turbocharged, small-capacity engines coming to Fiat cars in the next few years, so this 1.2-litre unit will soon be phased out. Its 60hp is ample, though it's not the kind of car you'd relish overtaking slower traffic in. Having said that, the Panda doesn't feel out of its depth on the M50 motorway at all.

While the Panda's suspension deals well with speed on the motorway and potholes and the like, its ride can be a little bouncy, thanks no doubt to the short wheelbase.

The test car has an optional panoramic sunroof fitted and the sunny weather allowed its use today. There's very little buffeting with it open. It actually improves the look of the car, I reckon, thanks to its contrasting black appearance. However, it did draw attention to the fact that air conditioning isn't fitted. Pity.

Obviously price is one of the most important factors for car buyers at this level, but so is road tax and fuel economy. The Panda 1.2 just slips into band A for tax with its 119g/km CO2 emissions. On the combined cycle it'll use 5.1 litres of petrol per 100 kilometres, which is good, if not class-leading.

I give the Panda back tomorrow and I'm surprised that I liked it so much. Its honest combination of space and value means it's still Fiat's best-selling car in Ireland and it does pretty well elsewhere in Europe too. Think of it as a Fiat 500 with sensible working clothes on and a much lower price.