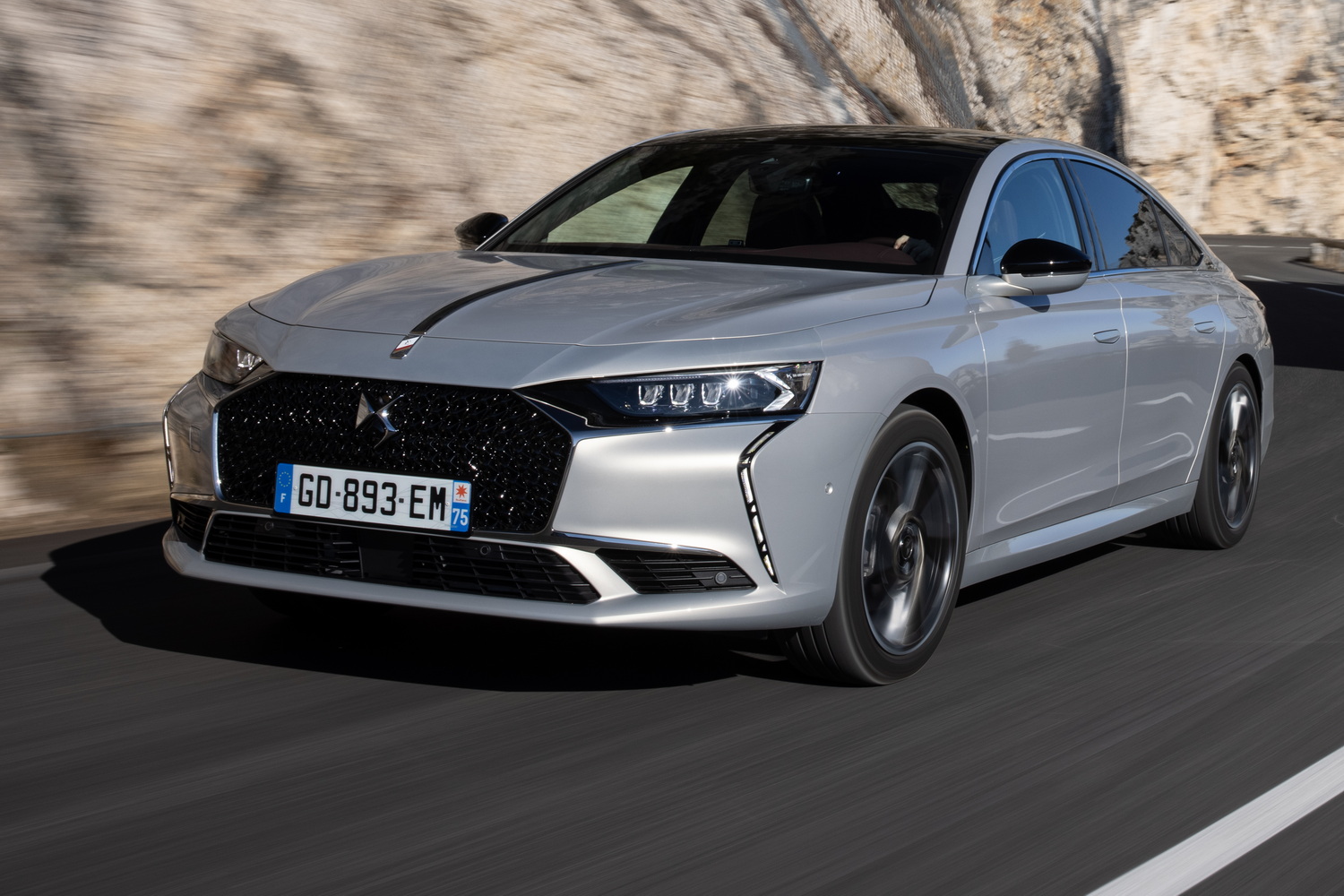 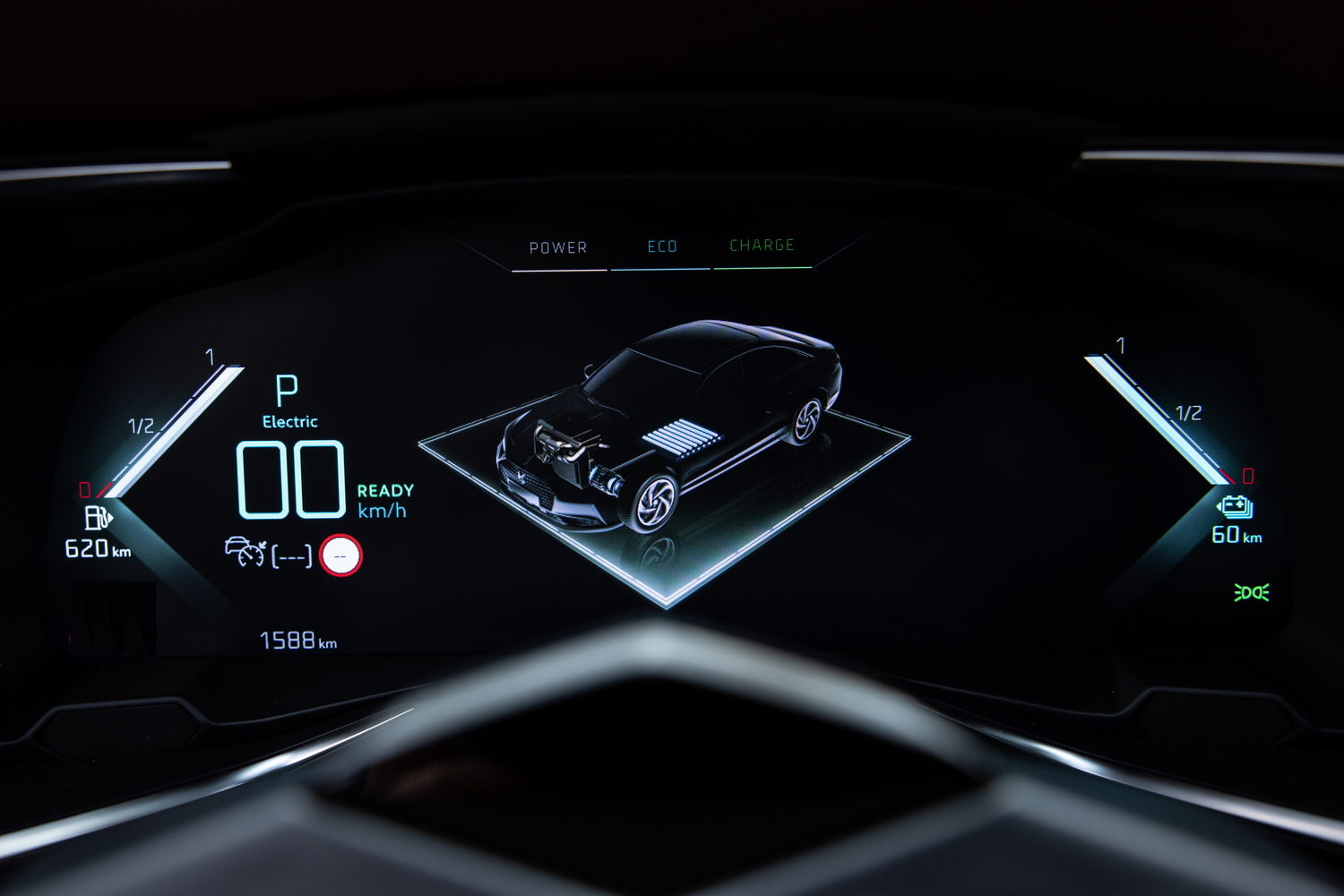 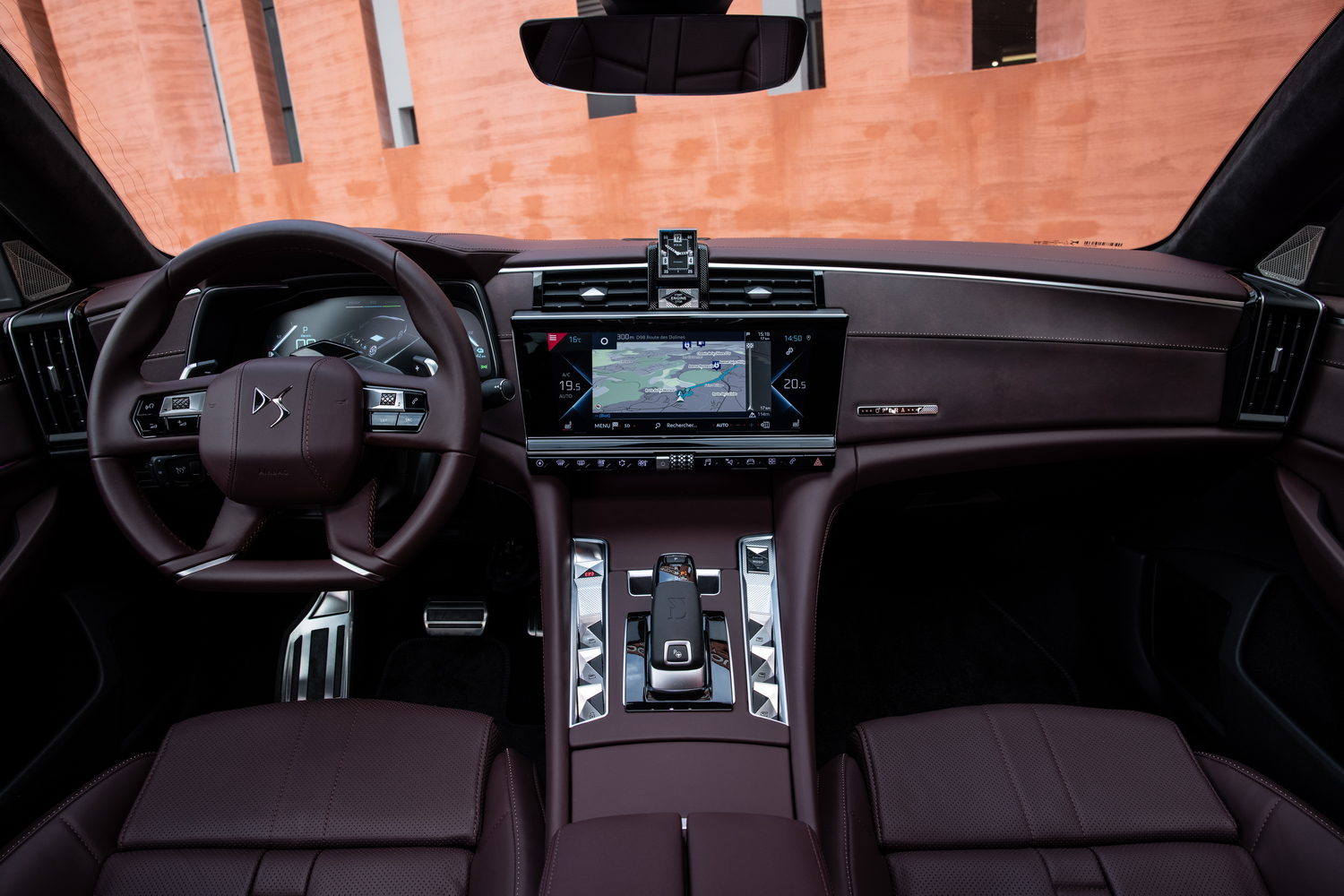 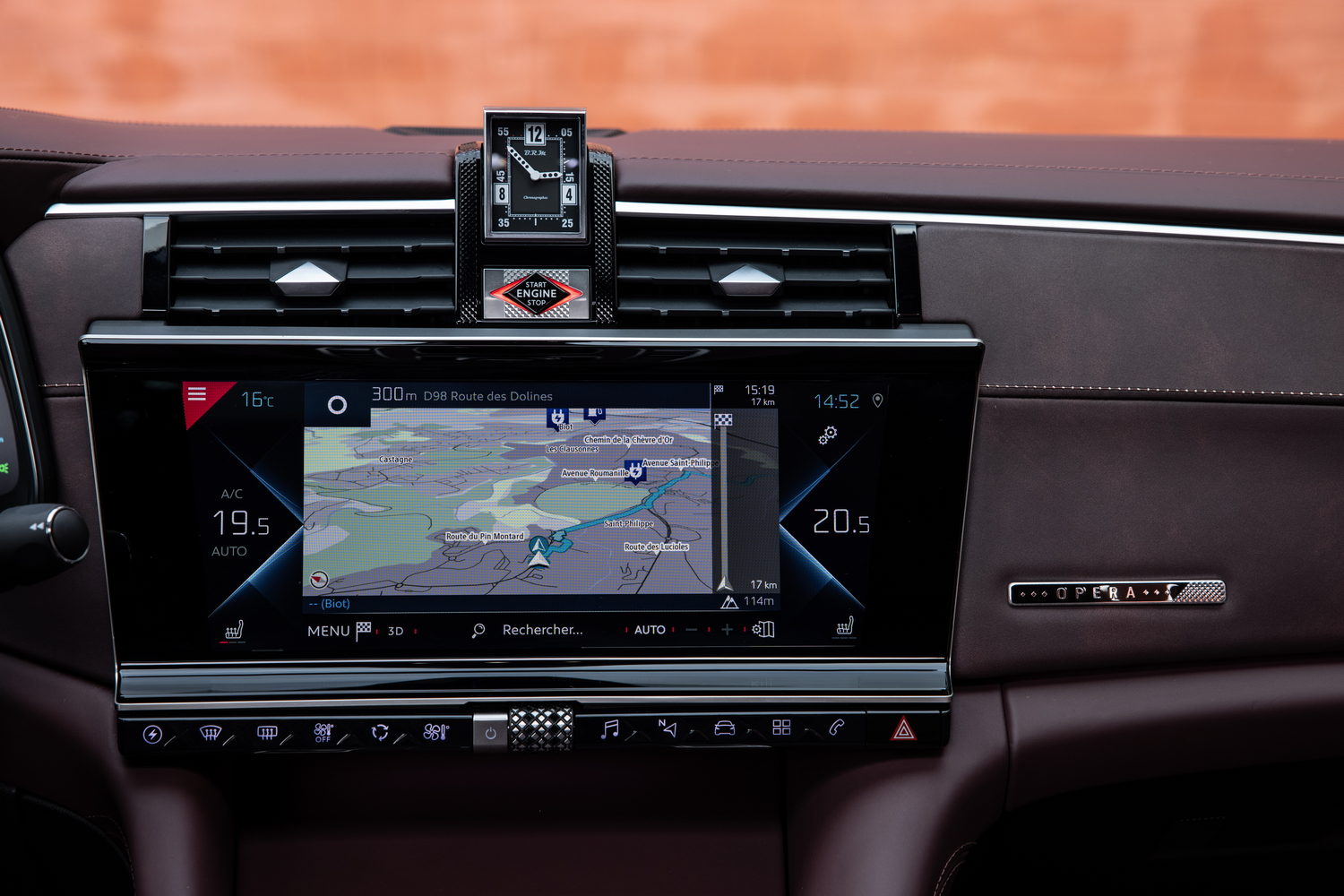 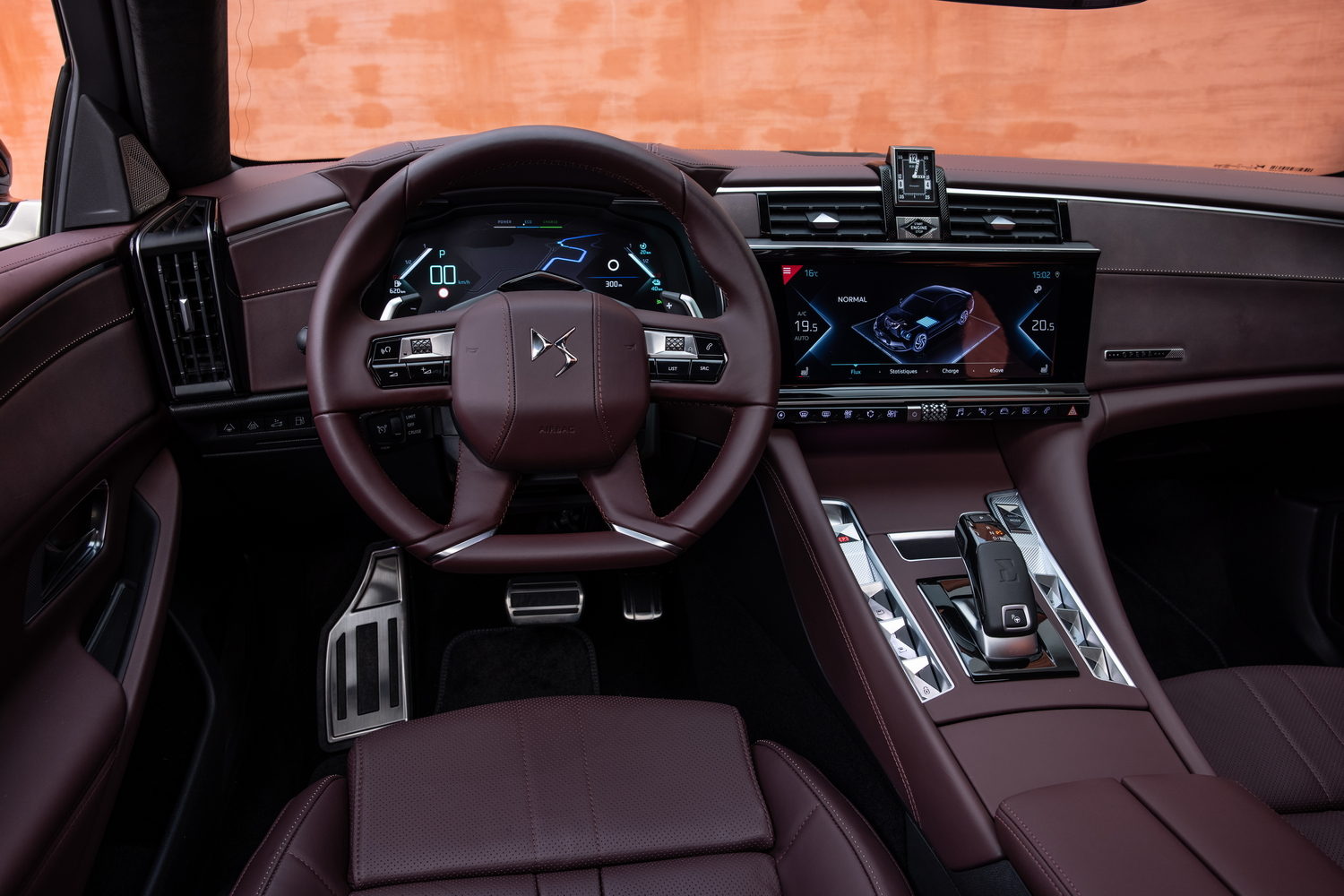 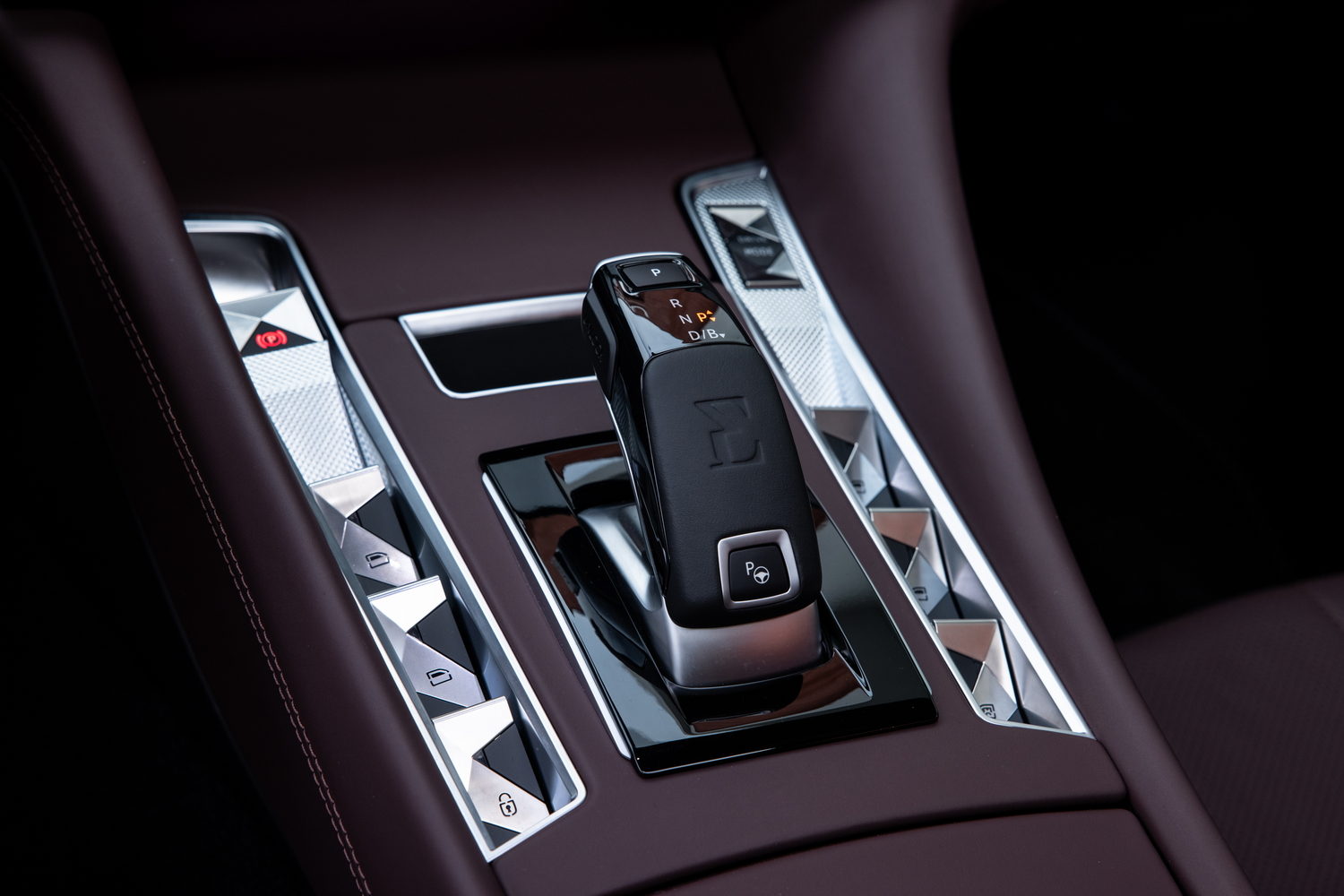 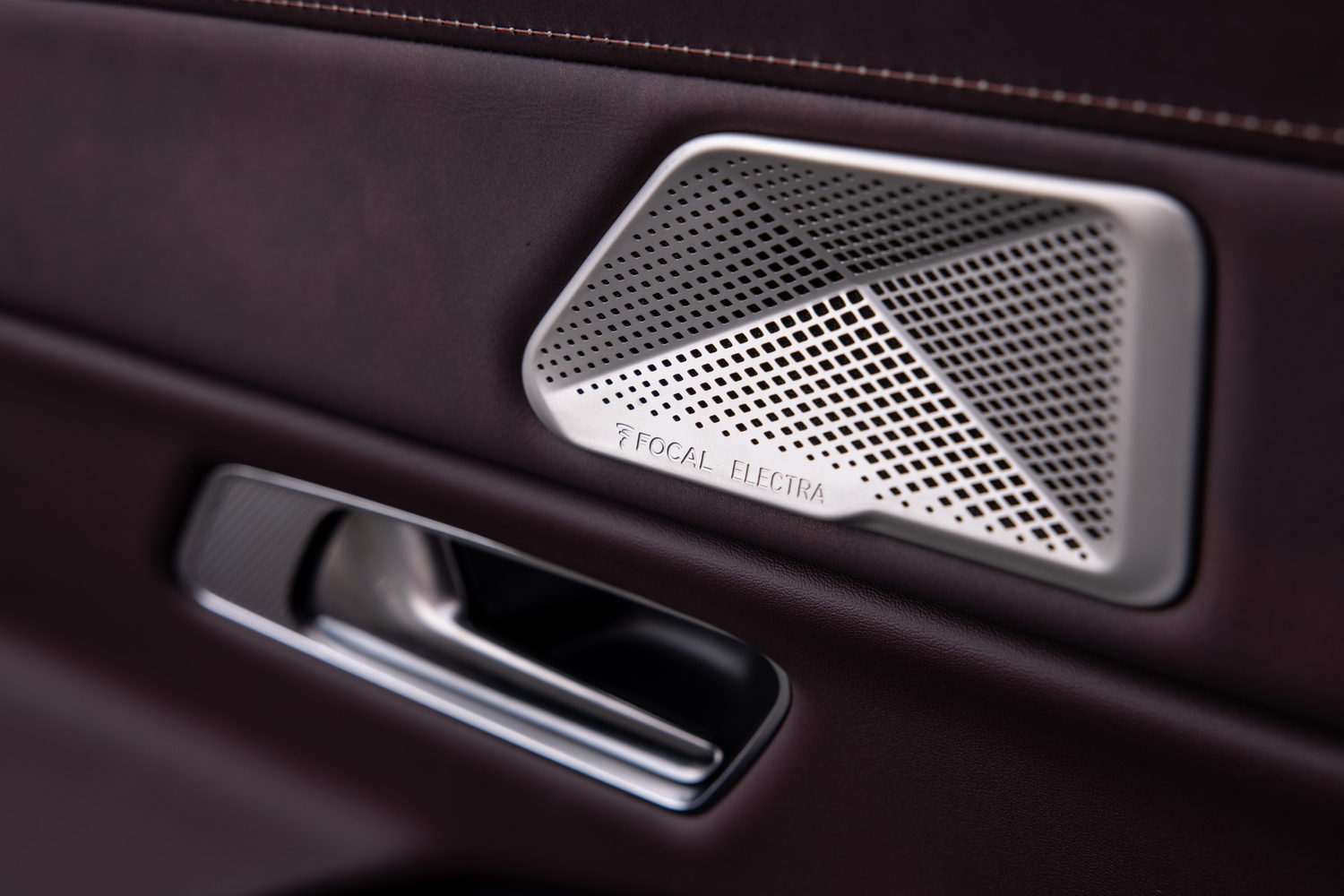 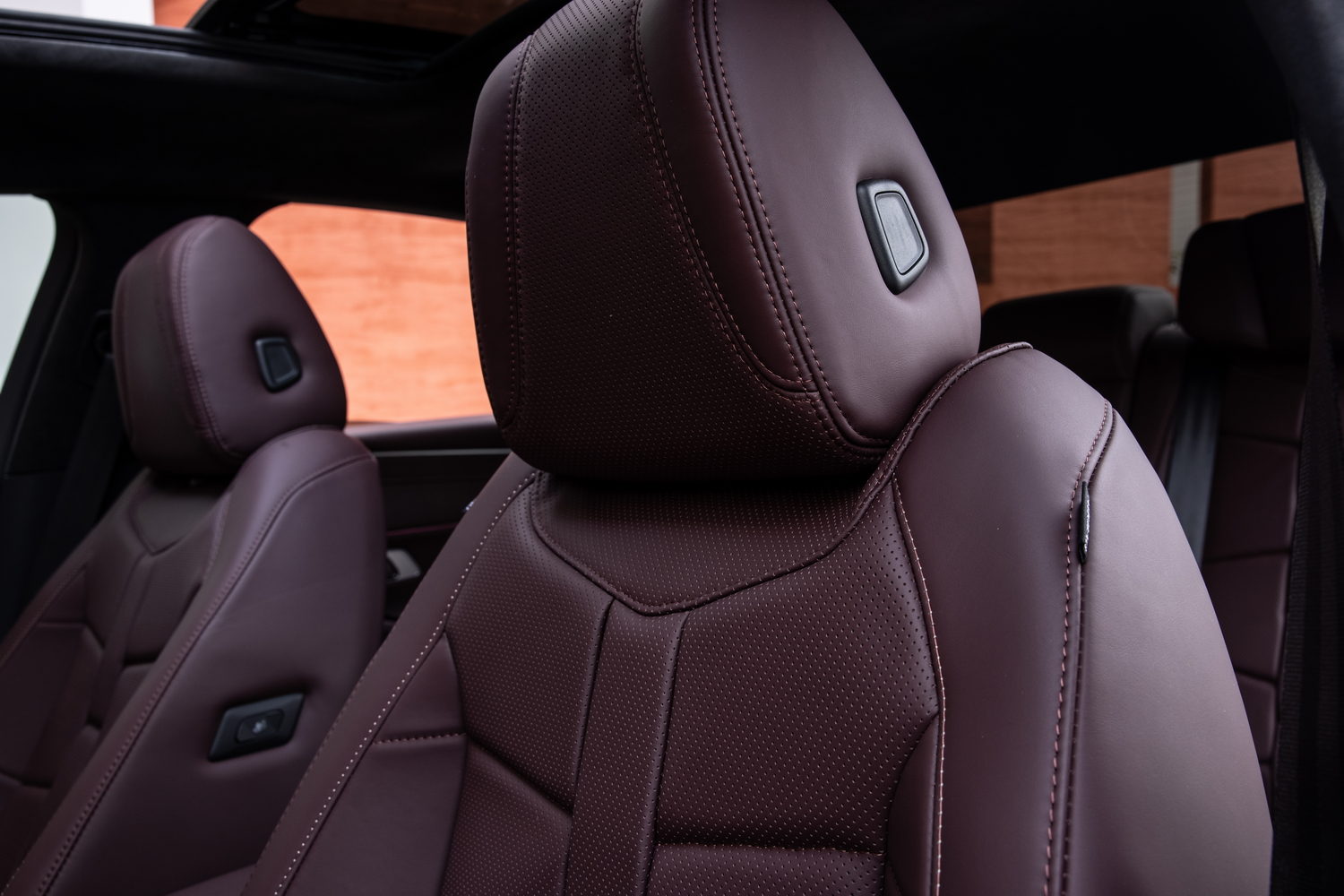 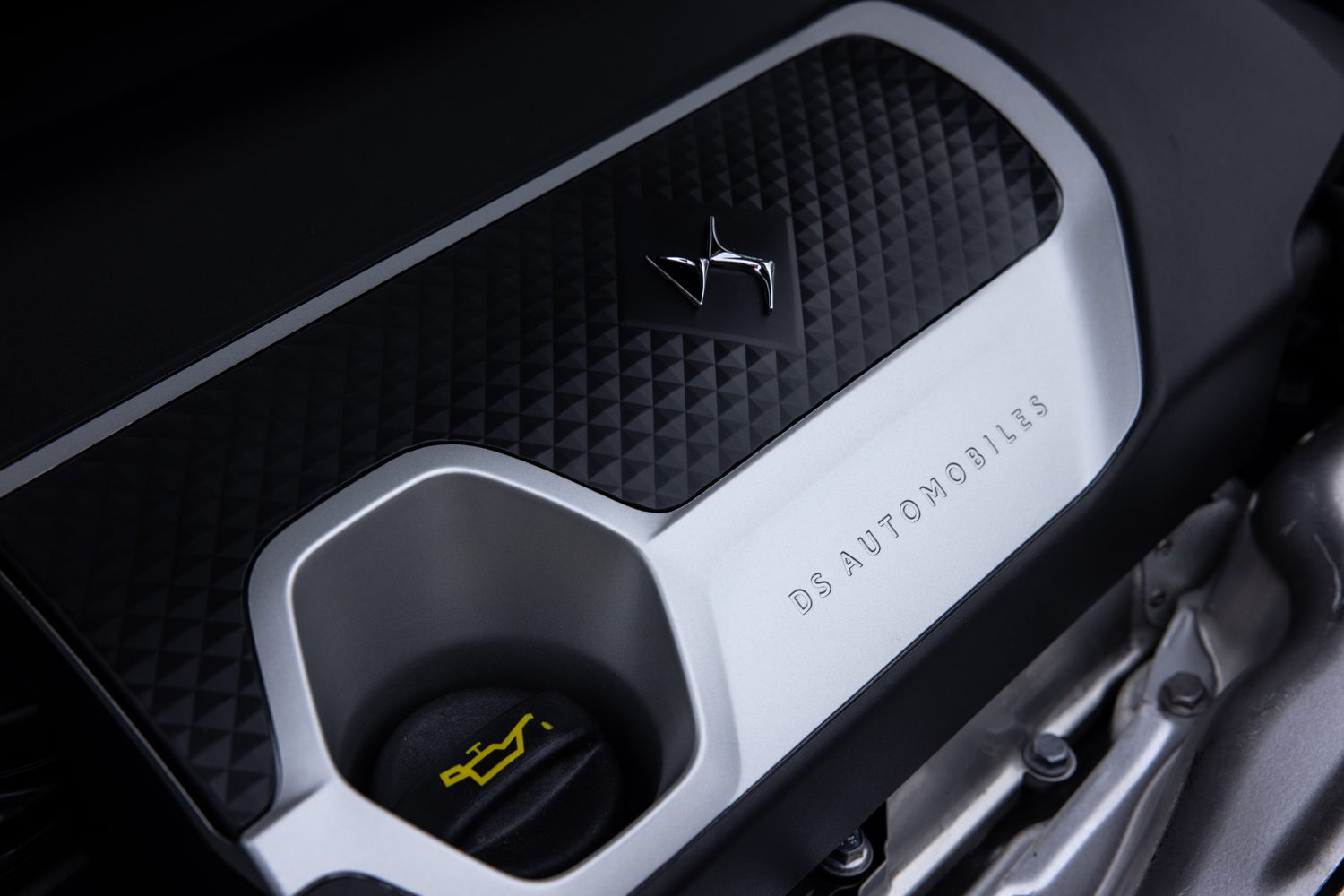 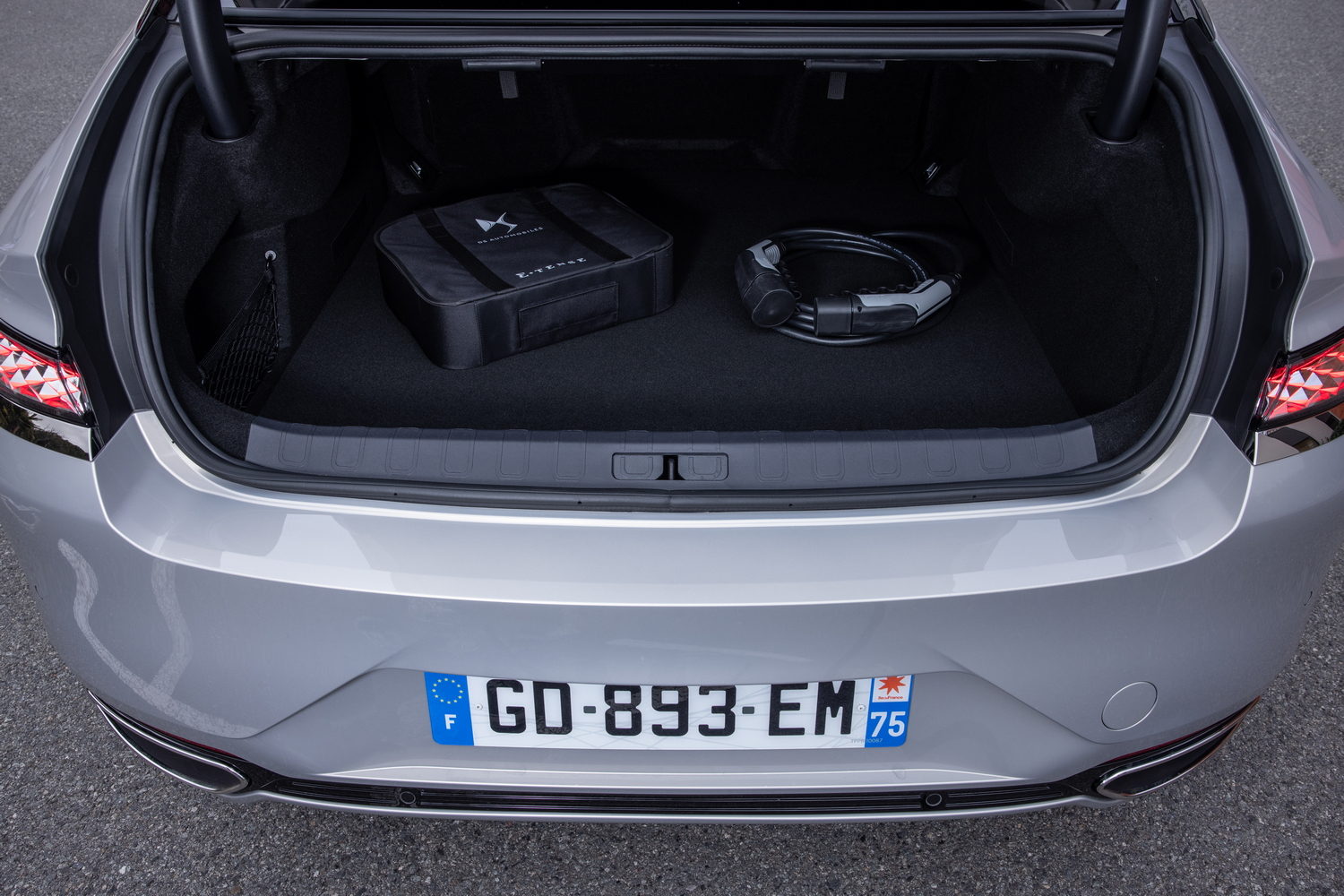 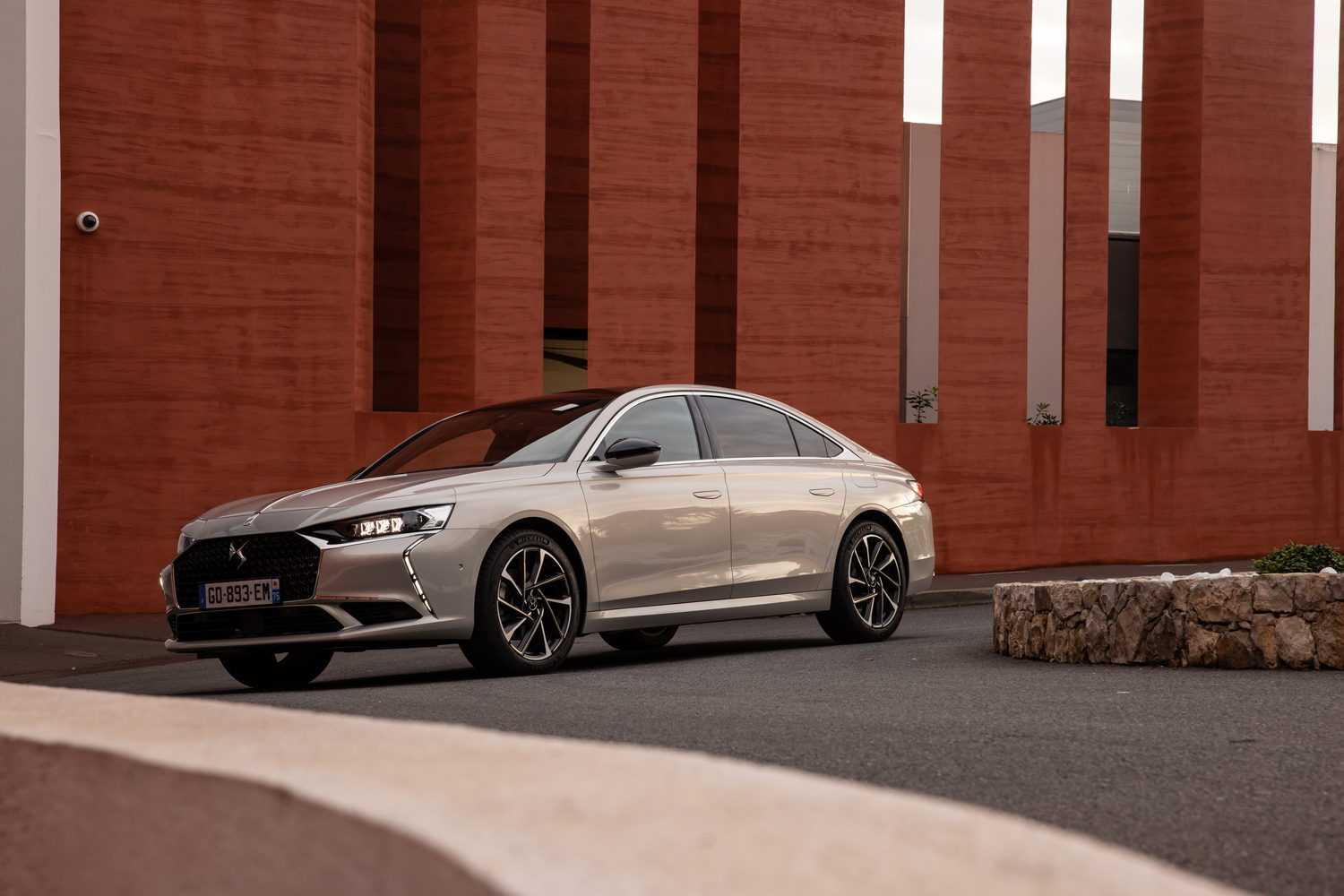 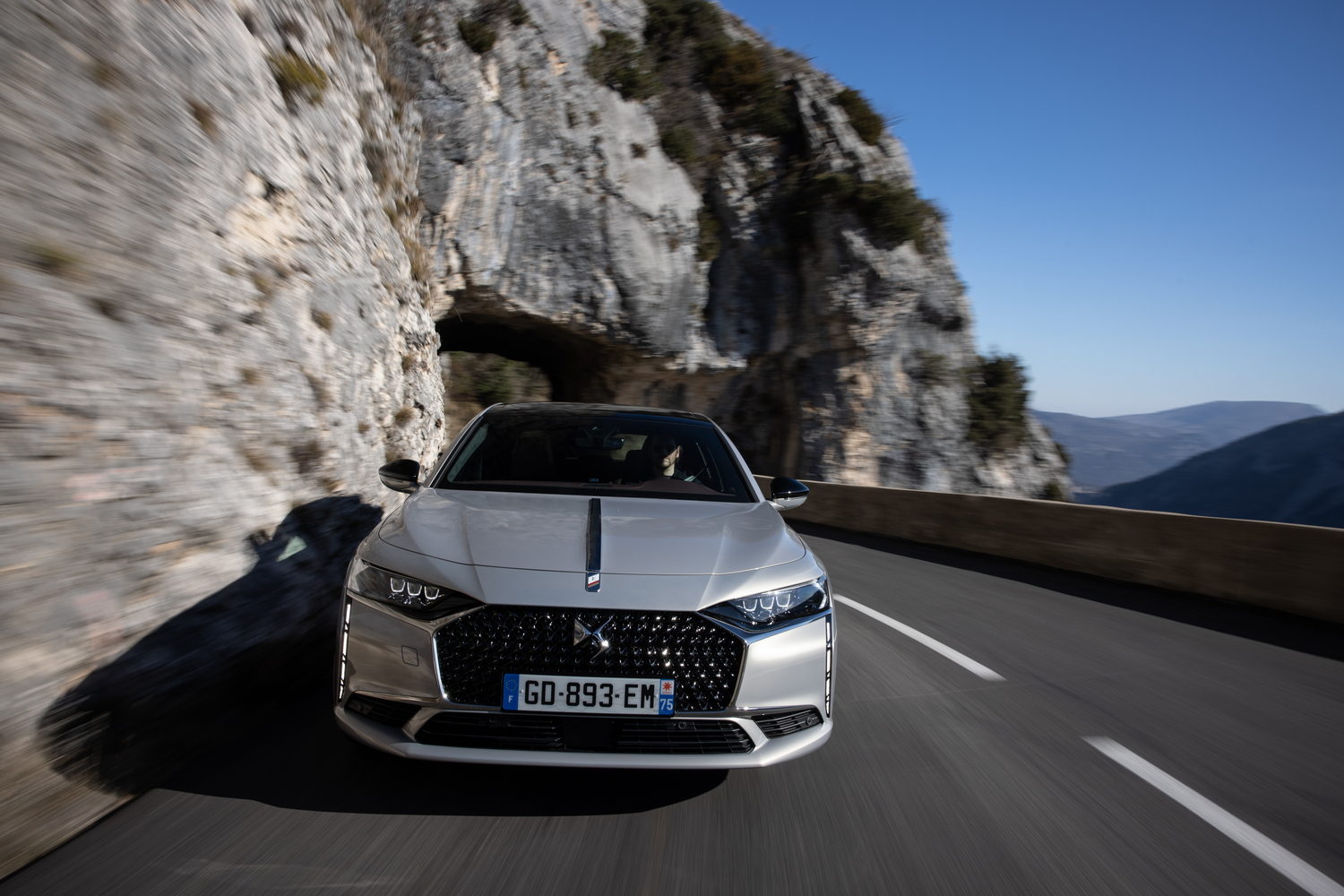 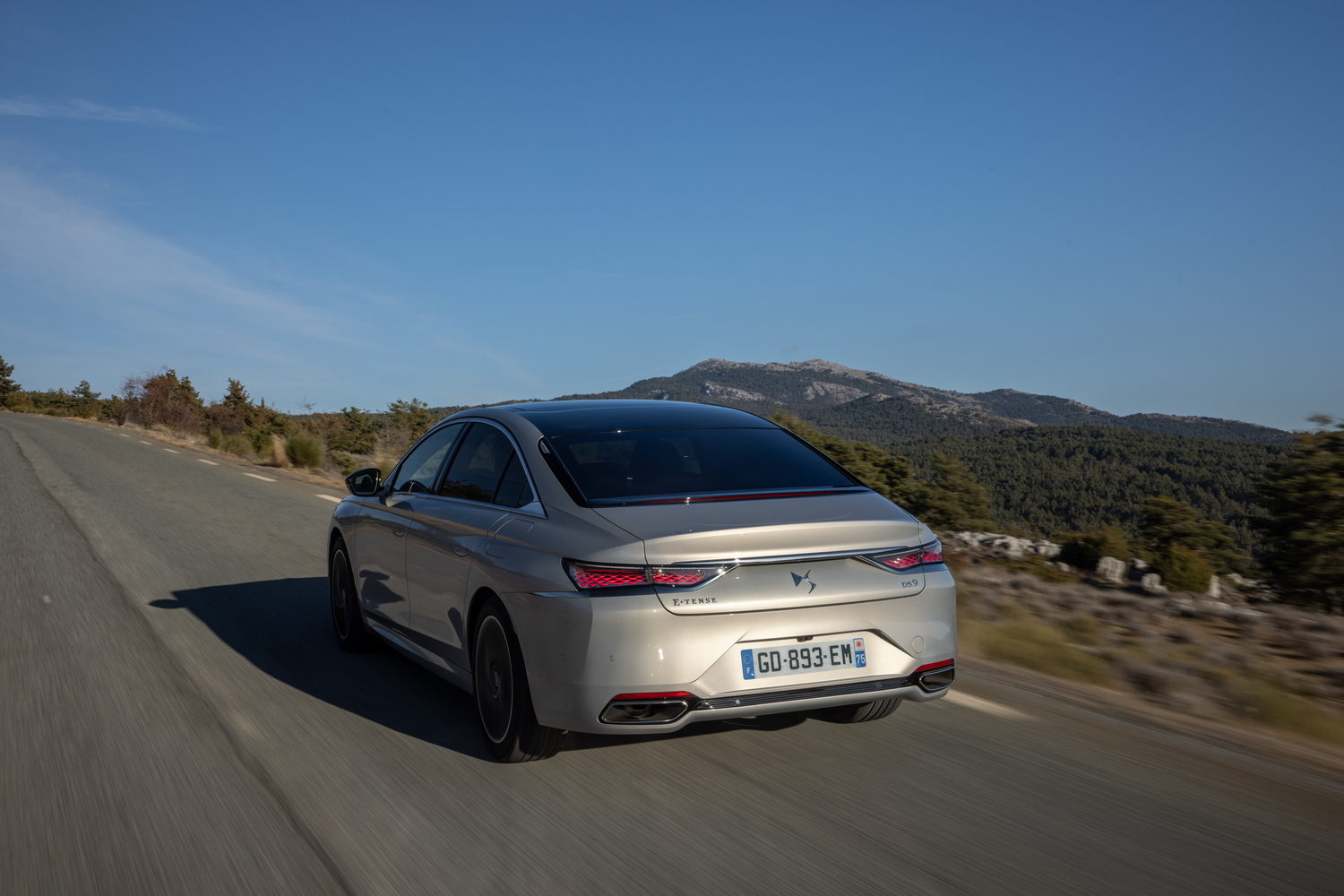 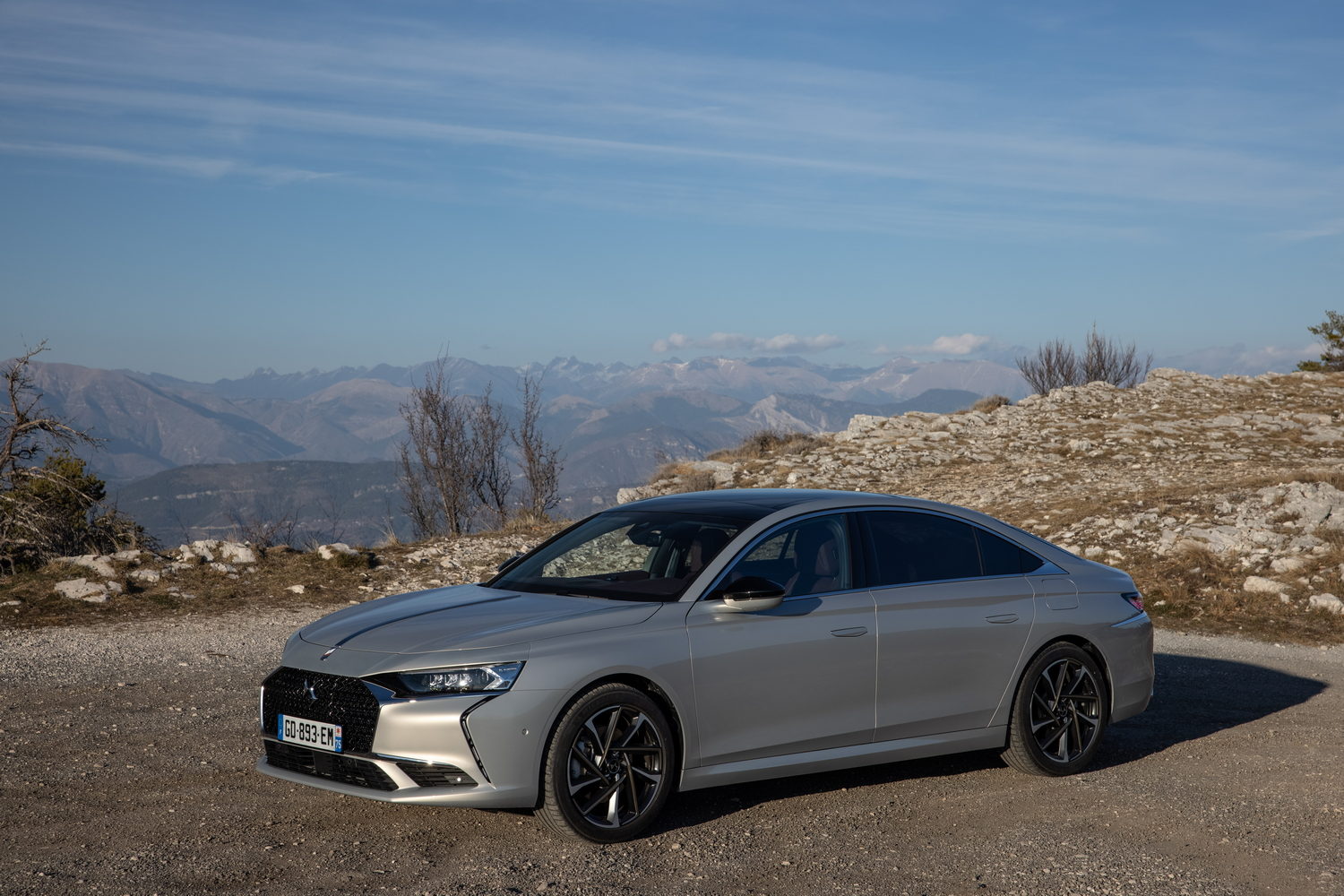 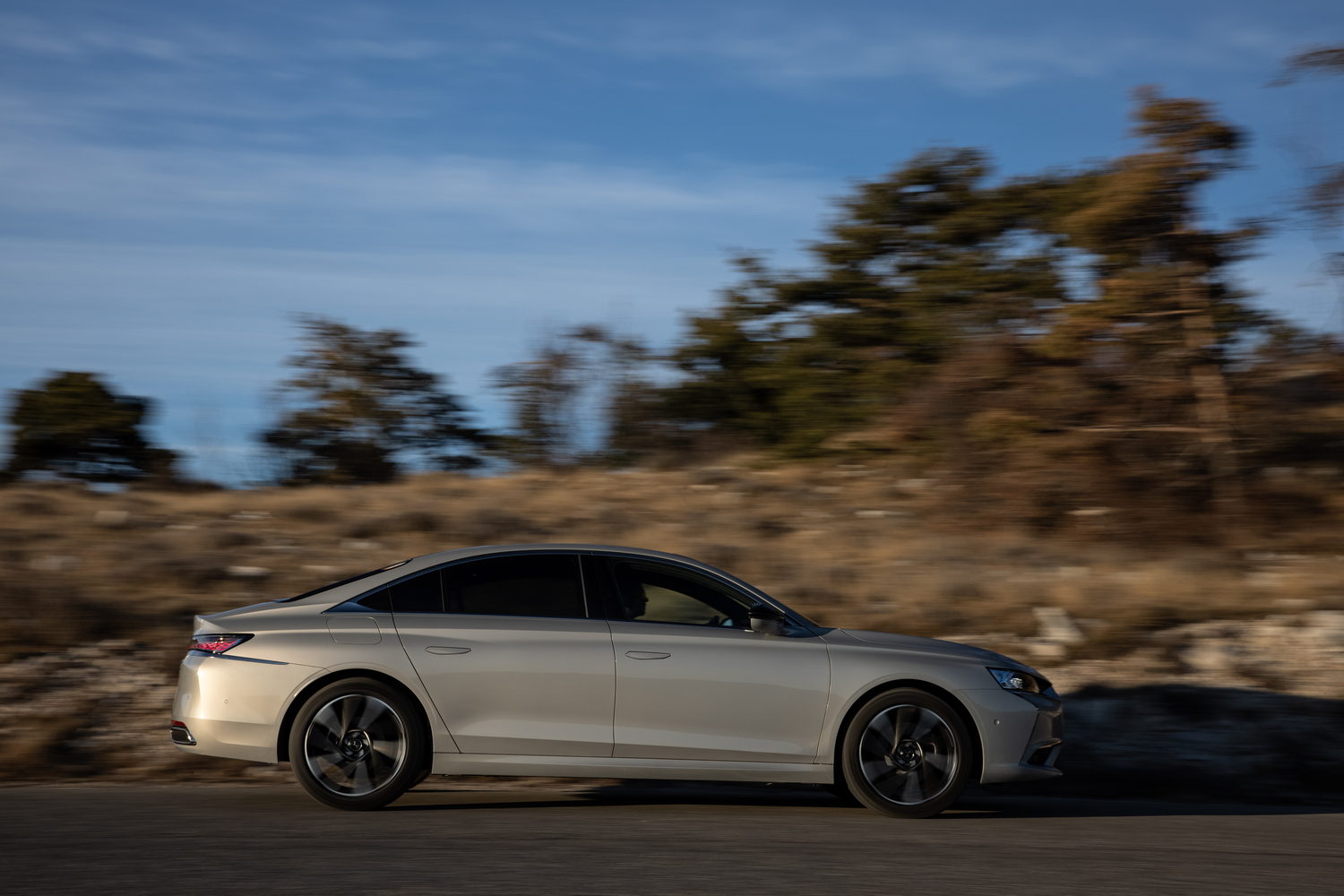 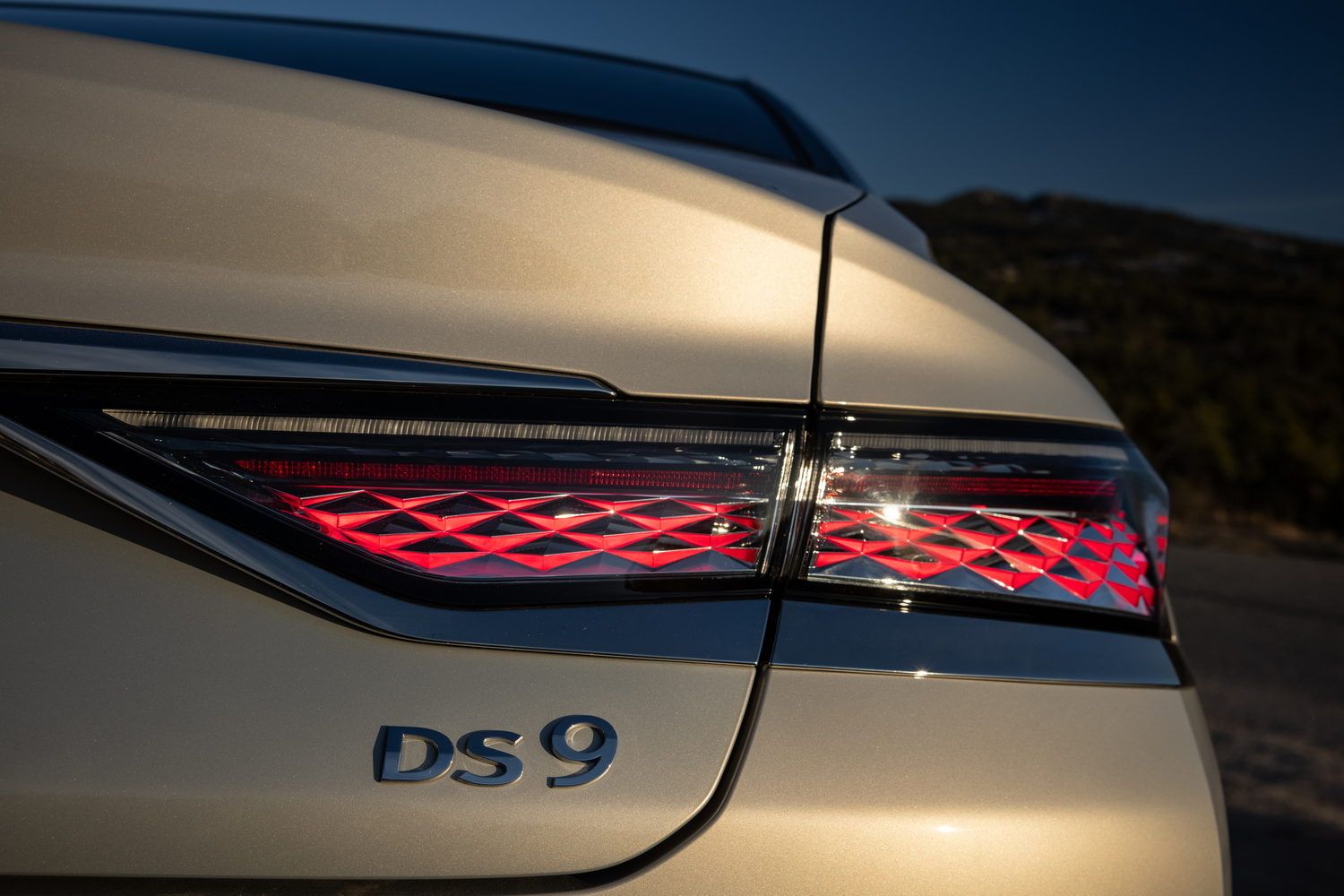 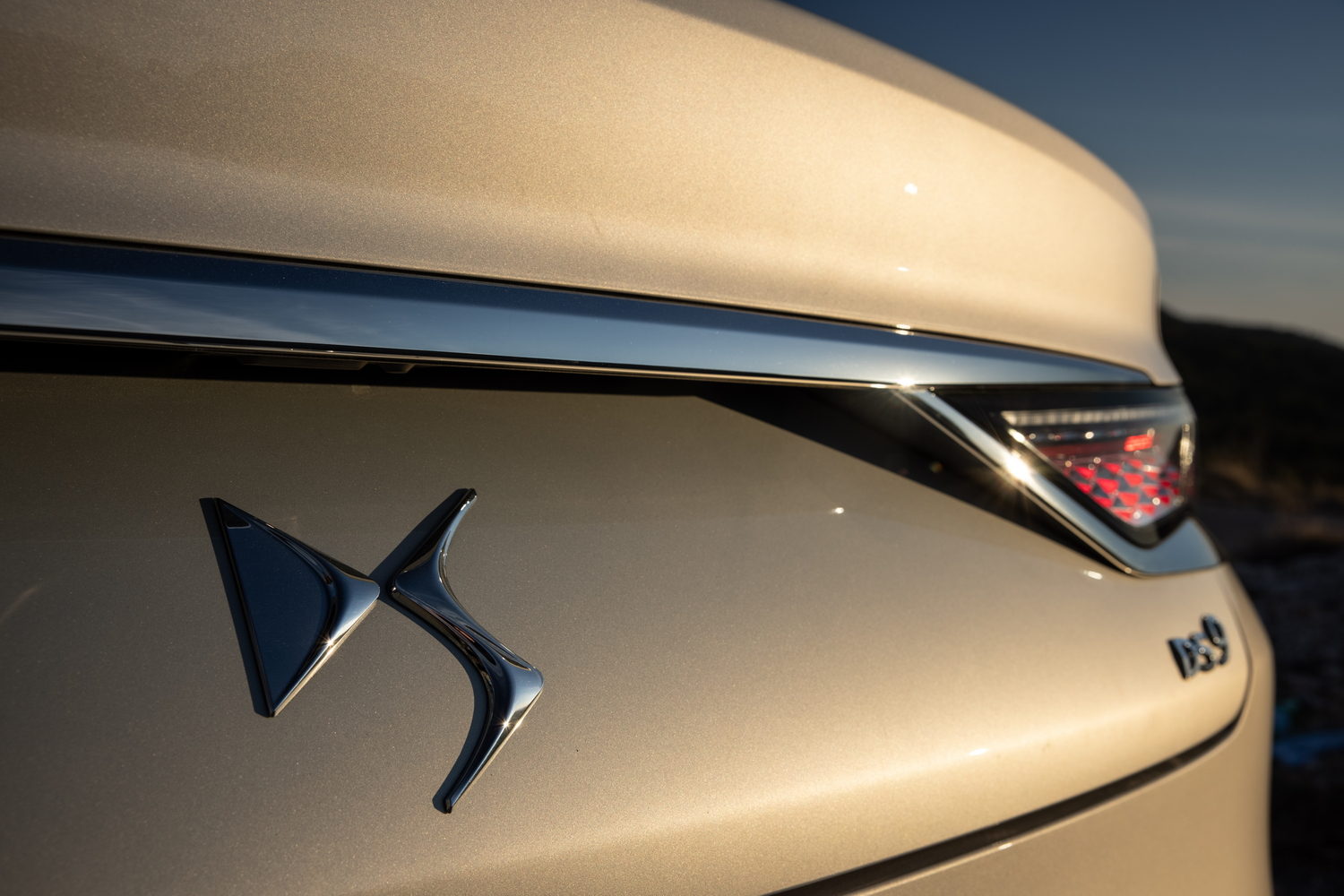 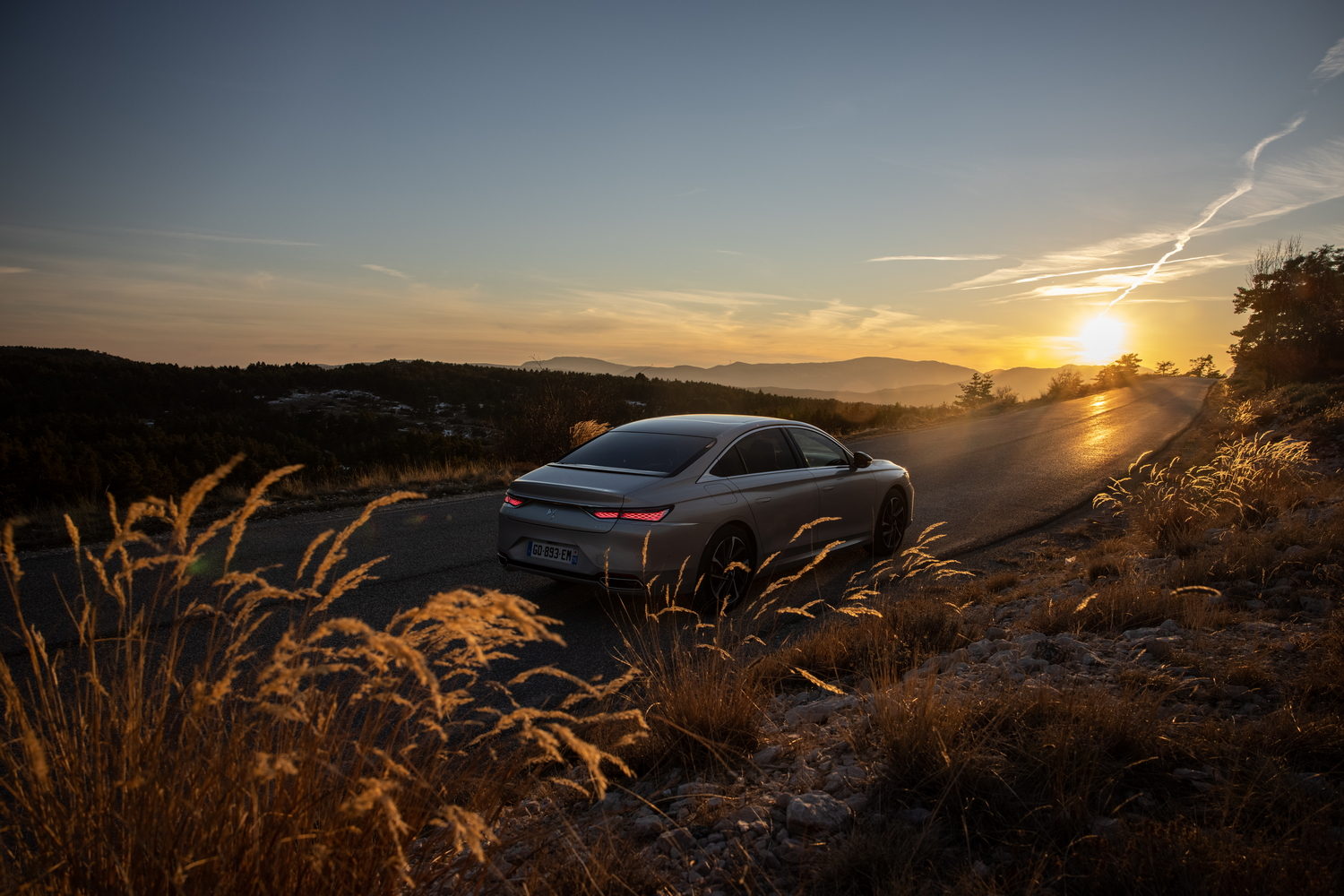 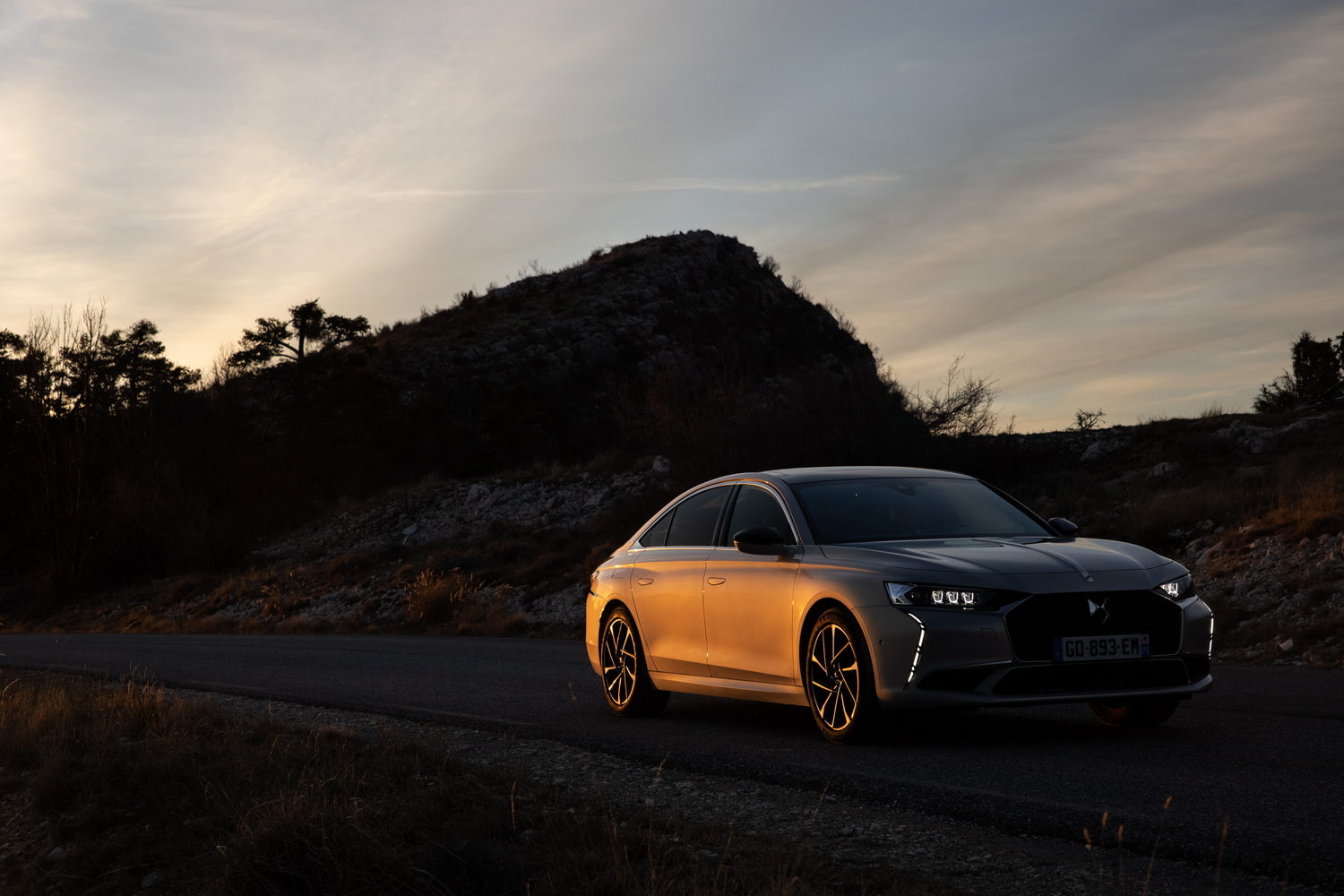 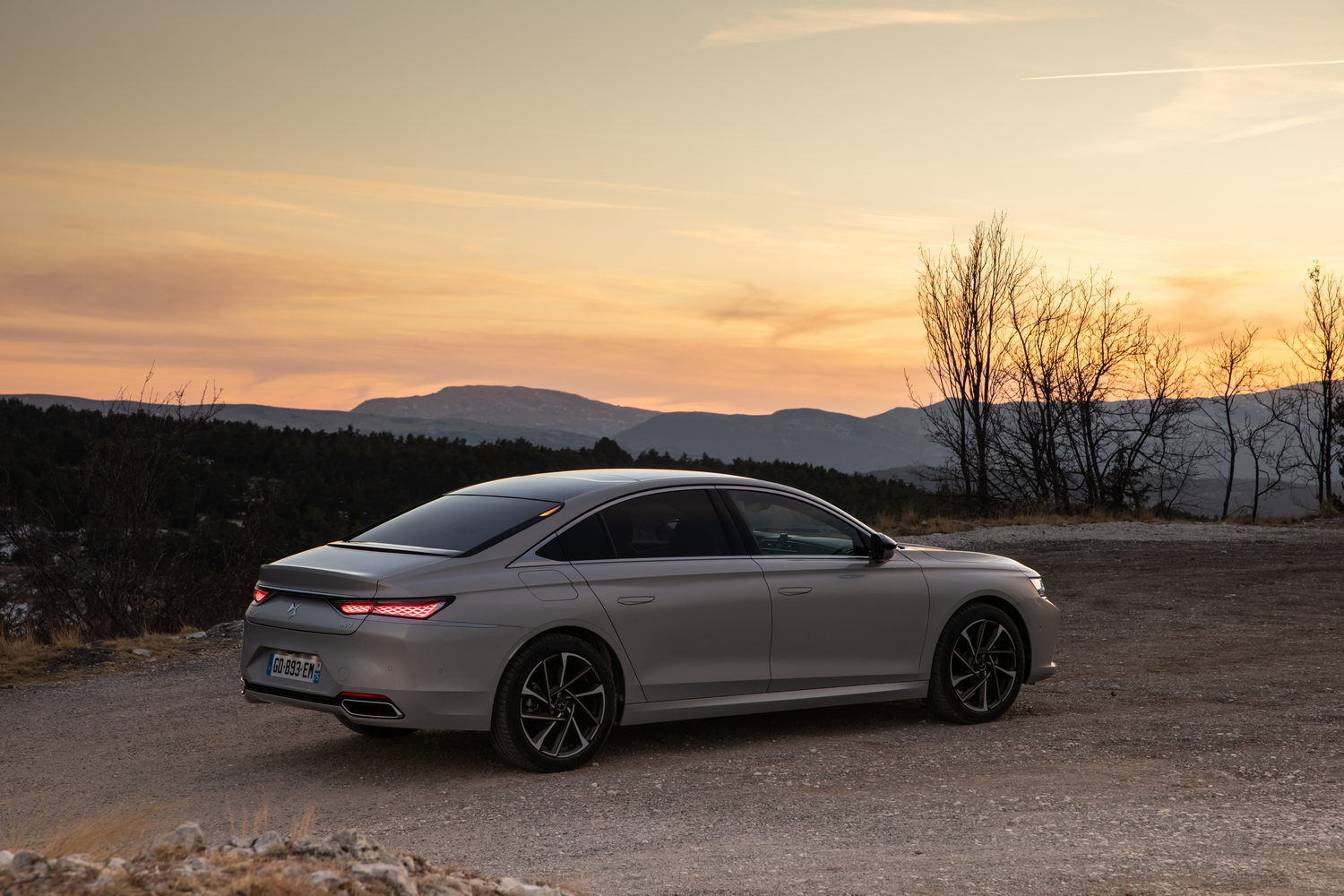 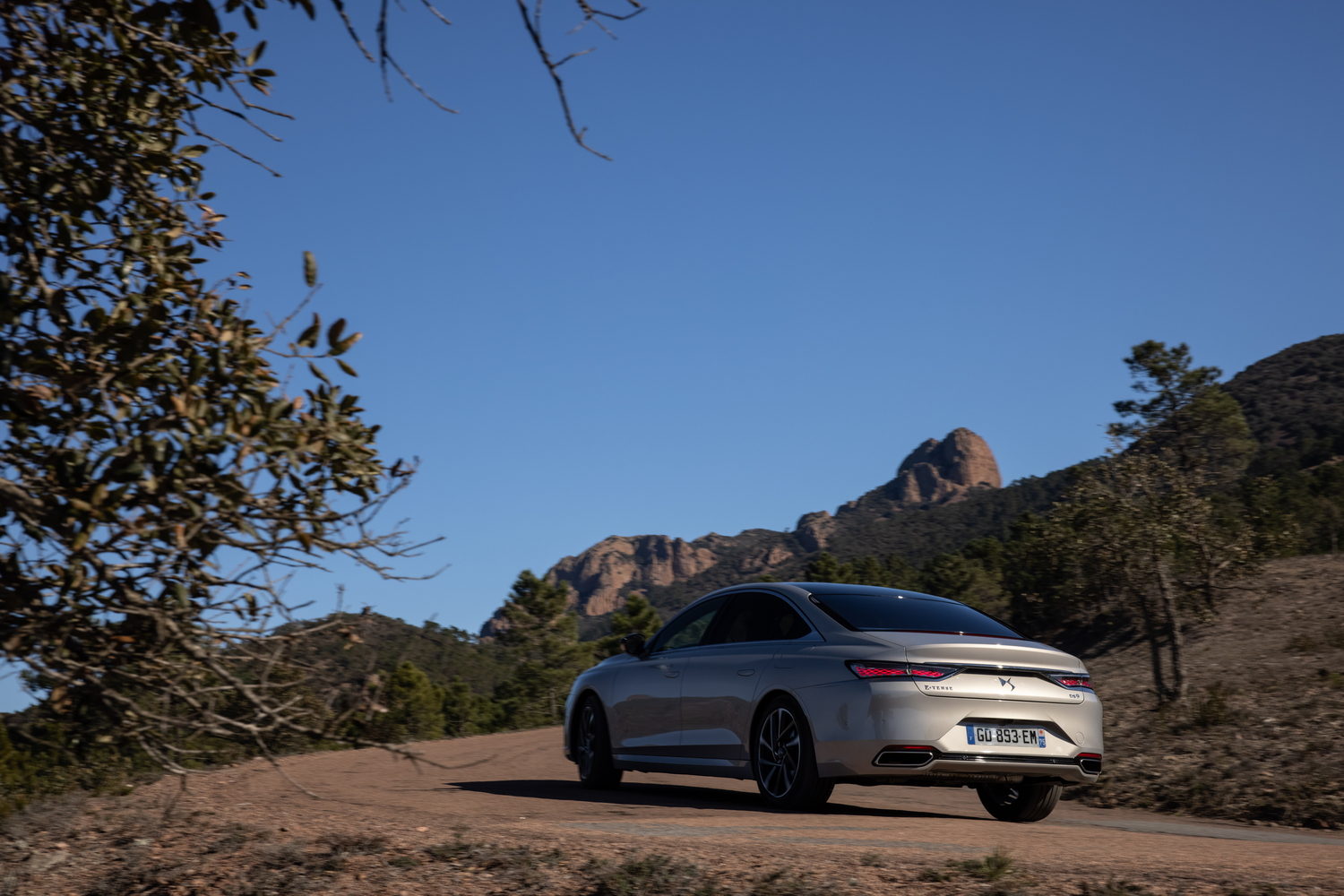 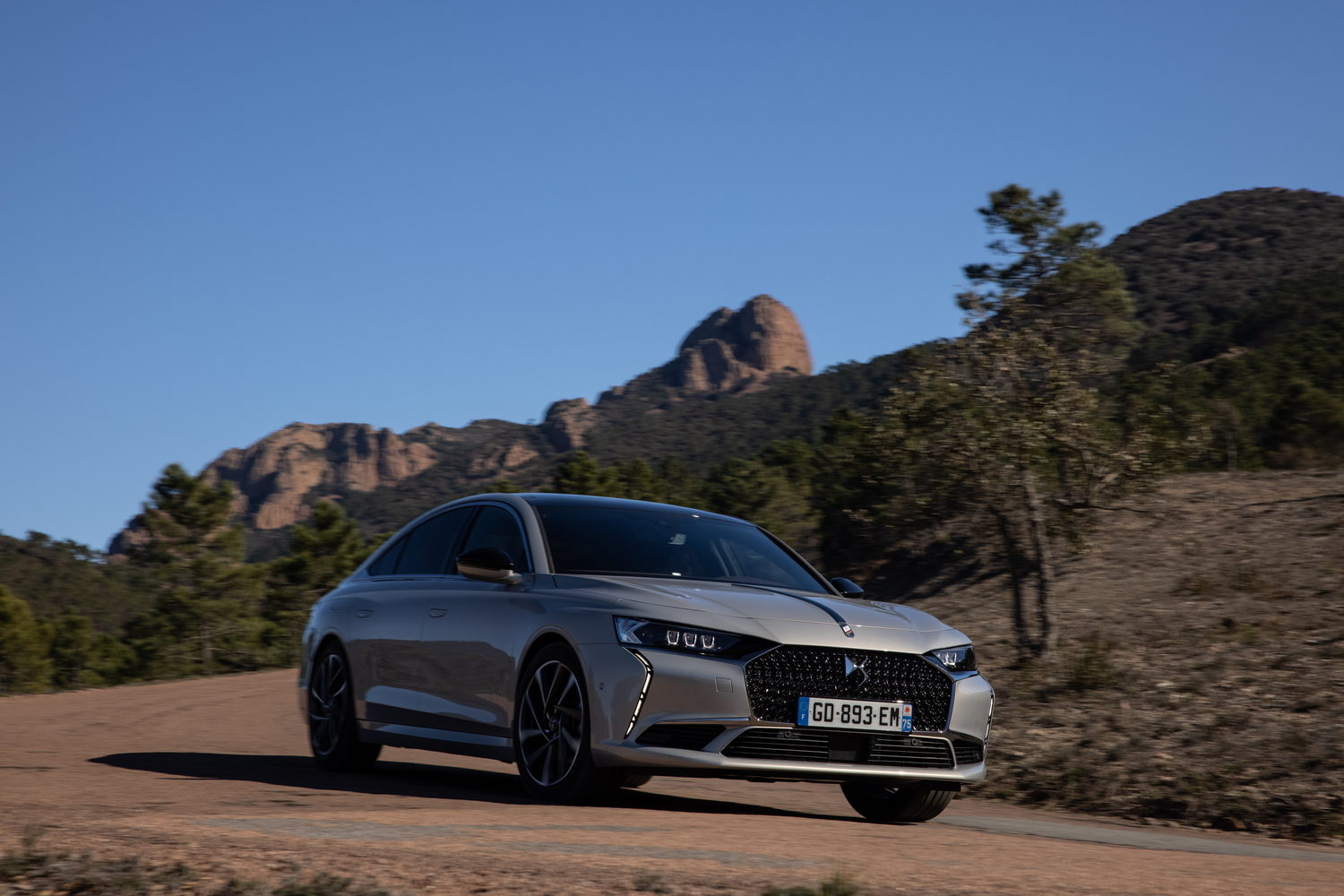 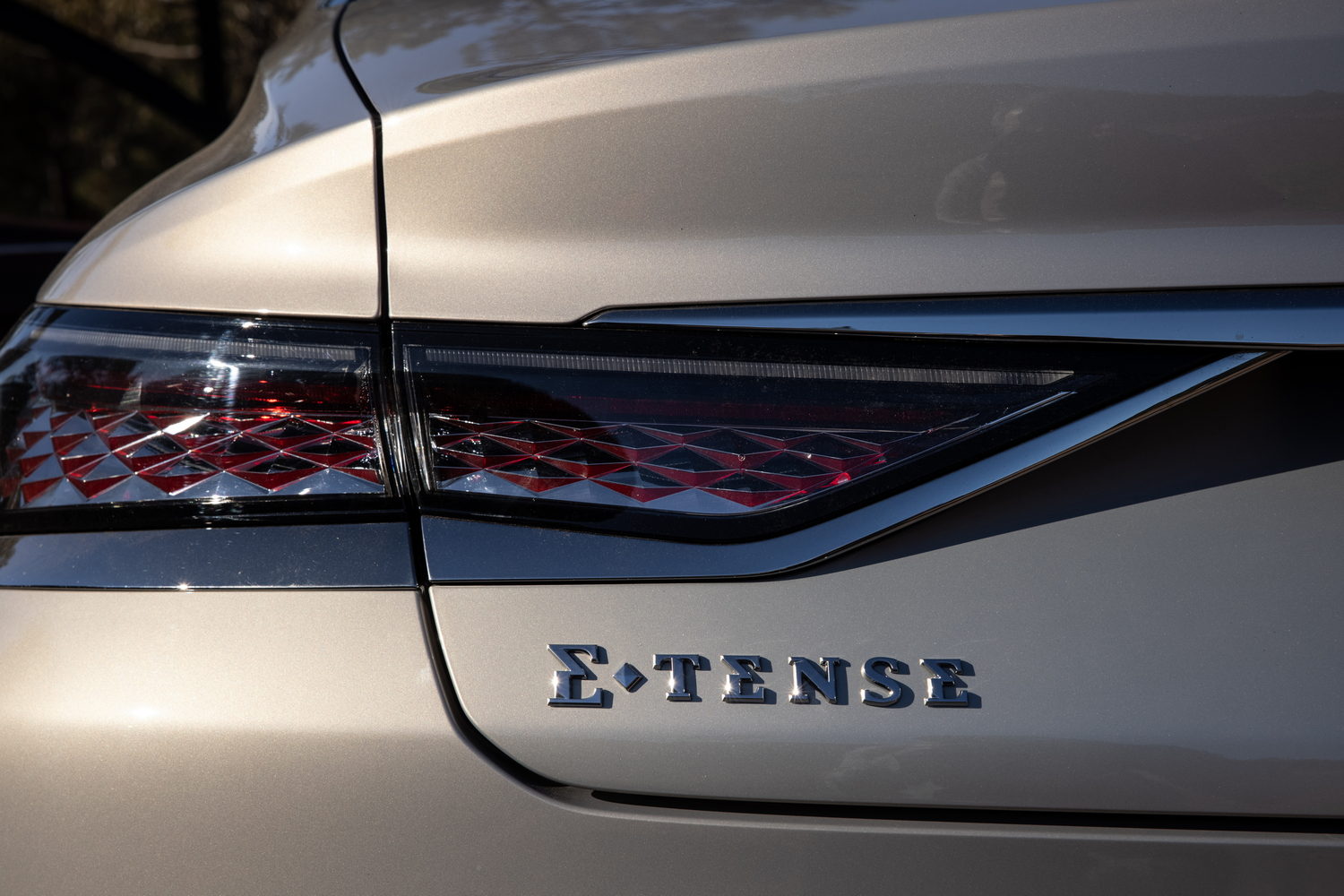 With striking looks and a refreshing attitude, this is the entry-level version of the new DS 9 saloon.

DS might have history, but as a standalone brand it's still finding its feet. A burgeoning product line-up is helping, and the DS 9 is a new mainstay of the French company's range. Although it's much the same size as a Mercedes-Benz E-Class or a BMW 5 Series, DS freely admits the newcomer won't dislodge customers from the big German brands. Instead, it's offering a distinctly French alternative to drivers who have already discounted the usual suspects. Here we review the cheapest model - the plug-in hybrid E-Tense 250 Performance Line+ - to find out whether it's a worthy option.

The DS 9 is instantly recognisable as a premium saloon car, but it's one with a stylish French twist. The chrome blade down the bonnet is a classy touch, and there's plenty of smart chrome brightwork around the grille, too. This Performance Line+ model looks a little under-wheeled, with dark 19-inch rims struggling to fill its arches, but the larger 20-inch wheels of the E-Tense 4x4 360 give it a little more presence.

At the back, there's a swooping roofline that merges with a smart rear end adorned with yet more brightwork. The taillights are designed to look as though they're breaking out from the car's skin, and the diamond pattern created by that effect mimics the sharp lines of the DS badge.

Inside, the cabin will be vaguely familiar to DS 7 Crossback owners, with a dashboard dominated by two enormous screens. Physical buttons have mostly been removed, leaving space for the window switches on the centre console and just a handful of touch-sensitive 'hot keys' on the dash. There are some smart additions, though, such as the BRM clock that's revealed when you start the engine.

The majority of the switchgear has migrated into the central touchscreen, where the climate control, hybrid system and infotainment controls have all been hidden. Although it mostly looks fresh and sharp, the screen has the odd moment of hesitancy and an aging navigation system. It's much better to plug a phone in and use Apple CarPlay or Android Auto, particularly for navigation purposes.

The driver display is more of a success, with a clear, sharp display that can be configured to the driver's taste. Audi won't lose any sleep after comparing it with the Virtual Cockpit in the A6, but it's a clean and well-executed piece of technology that helps to make the DS 9 feel like a proper executive car.

More important in that battle is the quality of the cabin. It isn't as solid as that of a Mercedes-Benz or a Volvo, let alone an Audi or a BMW, but it isn't bad at all. It's definitely as good as anything Jaguar has built in the past few years. A few underwhelming plastics aside, it's solidly constructed and most of the materials are excellent. The Performance Line+ trim feels a bit dark, thanks to its Alcantara trim, but more luxurious Rivoli+ versions feel really quite plush - particularly with the posh, leather-bound Opera interior.

Ergonomically speaking, however, the DS 9 comes over all French. The switches for the door mirrors are tucked away behind the steering wheel, just by the cruise control switches, and the starter button is just too far away to be reached comfortably. Using the touchscreen is also difficult, because there's nowhere to brace your hand so you can use it accurately. The only option is to rest a few fingers on the lip beneath the screen, but that's home to a range of touch-sensitive switches. One wrong move and you'll navigate to a completely different screen.

Those idiosyncrasies aside, the DS 9 is really quite practical. The rear passenger space is competitive for the class, despite the sloping roofline, and the boot is sensibly sized, too. At 515 litres, it's about the same as other executive saloons, but it's larger than a lot of other plug-in hybrids in this class.

Although this is the least powerful model in the DS 9 range, a 250hp plug-in hybrid system is not to be sniffed at. Combining the might of a 1.6-litre turbocharged petrol engine with a 110hp electric motor, a 15.6kWh lithium-ion battery and an eight-speed automatic gearbox, this is also the most efficient model in the DS 9 range. A full charge will take the car up to 61km on electrical power alone, while the brake regeneration system allows that range to be stretched over the course of a journey.

That means, assuming you limit most of your journeys to 50km or so and you can charge the batteries regularly, you could be looking at burning a little over one litre per 100km. And on the official economy test, this car will emit just 26g of carbon dioxide per kilometre, which should help ease any environmental worries you might have.

Of course, these figures will prove fanciful on a long drive, when the big DS turns into a heavy executive saloon with a small 1.6-litre petrol engine. Drive smoothly and it won't be too ruinous, but those with hooves of lead might find the economy somewhat disappointing on longer trips.

But that's true of most plug-in hybrid cars of this size, so it isn't much of a criticism. In fact, the hybrid system is quite well-suited to this car, making the most of its natural refinement. There's extraordinarily little road noise at any speed, and the two-motor powertrain is usually pretty seamless when it switches between petrol and electric power. Most of the time, the only suggestion that any change has been made comes when the numbers on the dashboard change from blue to white, signifying a switch in power source.

Only when you demand more of the car's 250hp might does the four-cylinder engine start to roar, and it discourages any ideas of sportiness you might get from the Performance Line+ trim level. This is a car much better suited to sedate, unhurried motoring.

That's partly down to the ride, which we found particularly soft and cossetting. With Active Scan suspension as standard, the DS 9 can monitor the road ahead and set the suspension up accordingly, which gives it a pleasant softness on motorway drives. It does seem to sacrifice some body control to achieve that, though, so Comfort mode proved a little vague on the French back roads of our test route. We'll wait until we've driven it on Irish roads before we pass full judgement on the ride quality.

We can draw more solid conclusions about the handling, which is surprisingly good for something with such a focus on comfort. The steering feels a little slow and it's definitely short on feel, but the car is stable and doesn't lean as much as you might expect. Quick direction changes aren't its forte, and the E-Tense 4x4 360, with its lowered suspension, is a more entertaining car to drive quickly, but the E-Tense 250 is stable and secure, and that's what matters.

It's also quick enough, with the combination of petrol and electric power allowing an 8.1-second sprint to 100km/h. And in pure electric mode, it'll hit 135km/h. It isn't rapid, but the instant grunt of the electric motor helps it to feel faster than the figures suggest it will.

This Performance Line+ model is set to be the cheapest DS 9 you can buy, although prices are still to be confirmed. But despite sitting at the foot of the range, there's plenty of standard equipment. As with other DS Performance Line models, there's Alcantara upholstery and a dark theme to the interior, while the standard 19-inch alloy wheels have red centres and there are Performance Line badges dotted around.

Moving up to Rivoli+ trim gets you wireless phone charging, soft leather upholstery and some extra safety equipment, plus ventilated front seats. Otherwise, the only real difference is the more luxurious interior style, which replaces the Performance Line+'s slightly incongruous sporty feel.

While the DS 9 may not be up to the standards of the (mostly German) class leaders in terms of quality or composure, it isn't far away. It's certainly close enough to compete with other alternatives, including the Volvo S90 and Lexus ES, where its refreshingly different approach sets it apart. Although it will never sell as well as the German competitors, it's a statement of intent from DS, building on the DS 7 Crossback's talents to position the brand as a genuine premium contender. 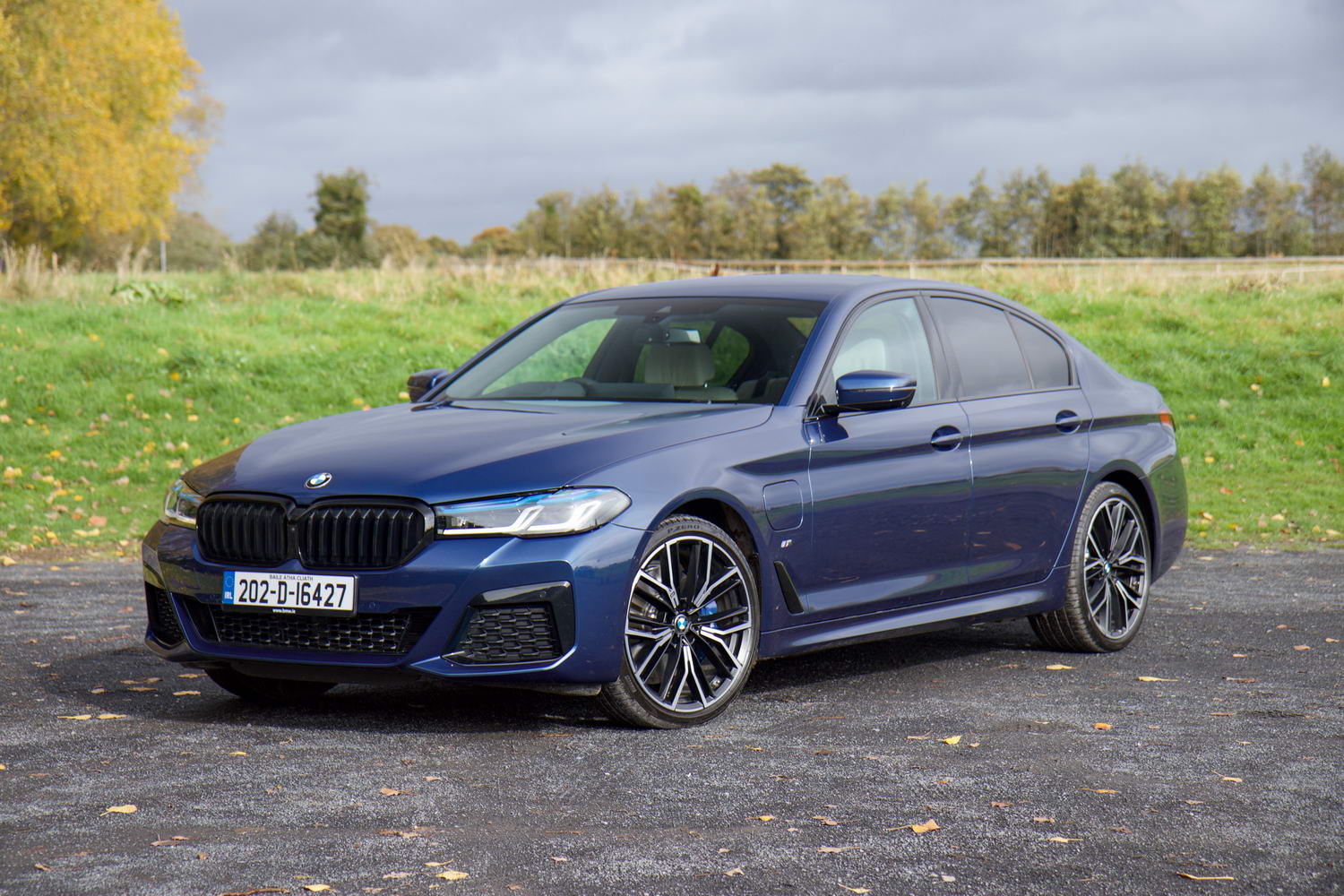 BMW 530e plug-in hybrid (2020) review
BMW 530e vs. DS 9 E-Tense 250 (2022): among the top dogs in the executive saloon class, the 5 Series majors on handling and quality, while still offering great tech and material quality. The 2.0-litre 530e hybrid isn't as smooth or refined as the six-cylinder 545e, but it's cheaper and more efficient. 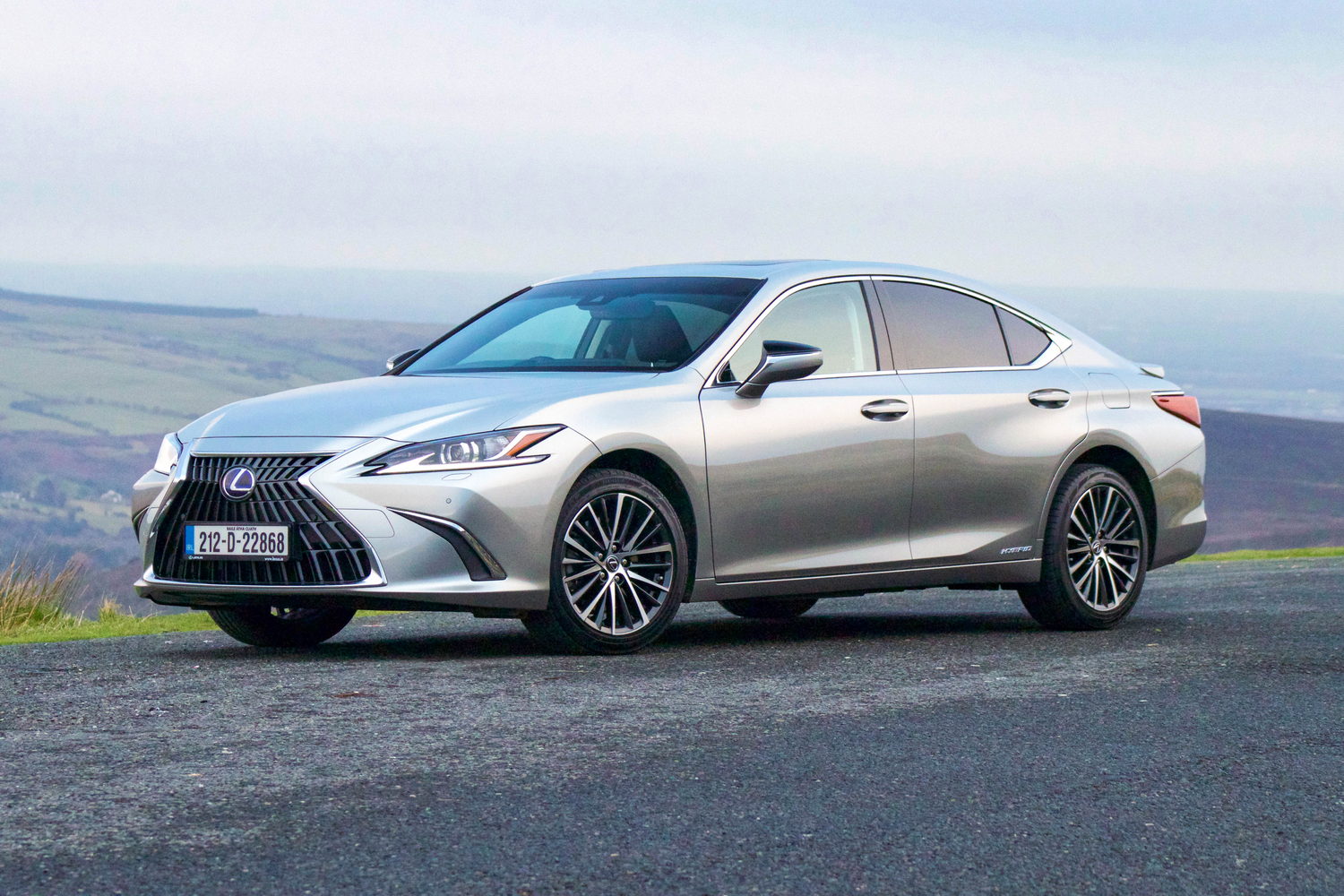 Lexus ES 300h (2022) review
Lexus ES 300h vs. DS 9 E-Tense 250 (2022): beautifully made and extremely comfortable, the ES 300h is an underrated alternative to the German establishment. Using a conventional hybrid system, rather than plug-in power, it's an efficient and sharply styled executive car. 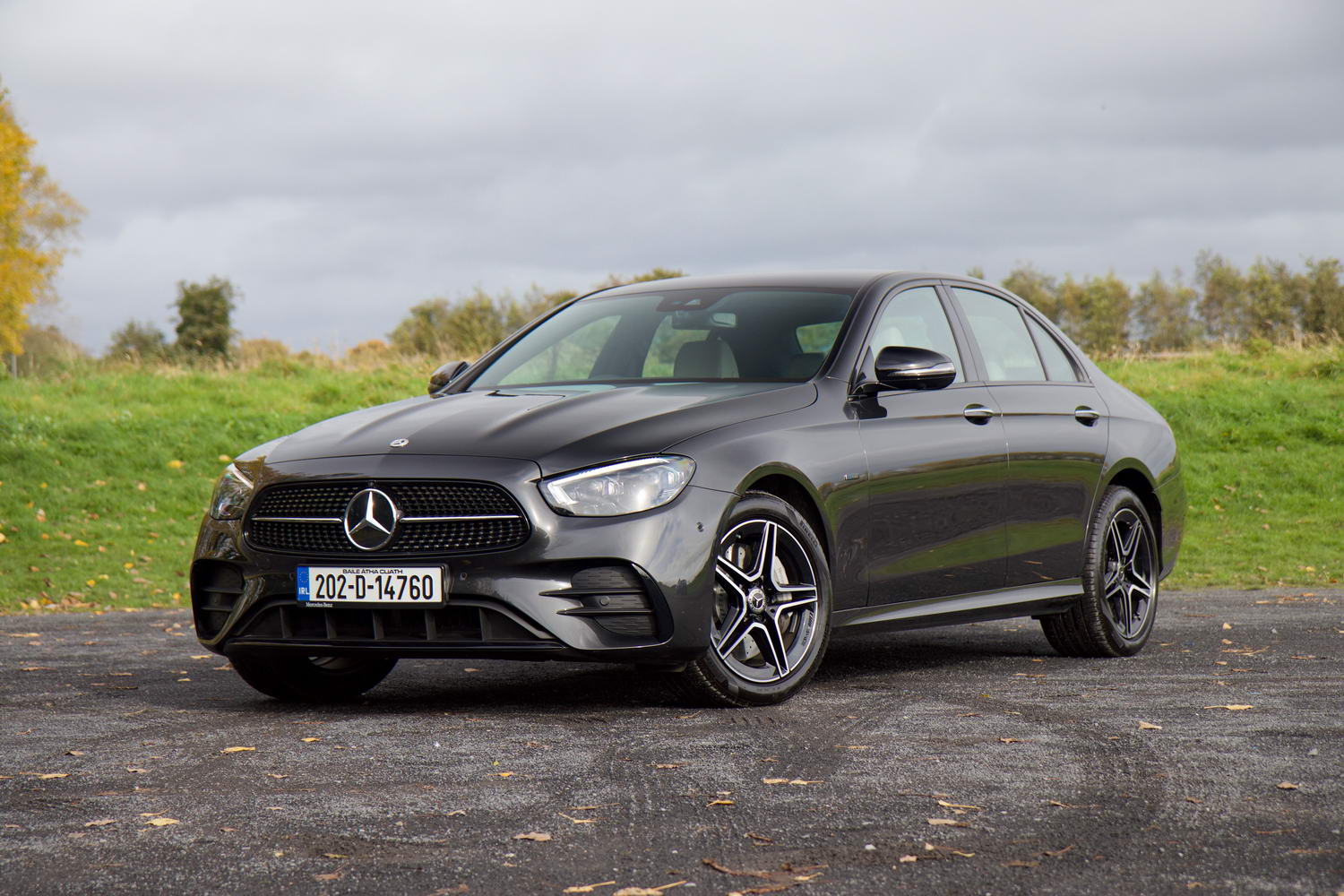 Mercedes-Benz E 300 de hybrid (2021) review
Mercedes-Benz E 300 de vs. DS 9 E-Tense 250 (2022): like the DS, the E-Class is a comfortable executive saloon with a stylish cabin, but it has snazzier tech and more composed handling. The E 300 de is an outlier, mixing the efficiency of diesel with electric power, but it does it to good effect.