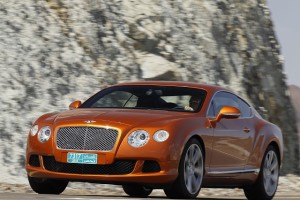 Bentley may not find as many Irish buyers for its new Continental GT as before, but it's still fabulous.

Effortlessly fast, beautifully finished and sharply styled, the 2011 Bentley Continental GT is a unique proposition that mixes supercar pace and sumptuous luxury in one very desirable and capable package.

Replacing the Continental GT was never going to be an easy task and Bentley seems to have approached the problem much like Porsche does when it's faced with a 911 update. The styling is evolutionary, being immediately recognisable but not so similar to the old car that it's not obviously new.

There's more confidence to its lines: the sharper definition to the front wings and bolder wheel-arches at the rear give the GT more presence and add modernity. New head- and tail-lights continue the changes, while a more upright grille and reshaped rear end help create a more dramatic, athletic look.

The revisions inside are more subtle, but then there really wasn't much wrong with the old car's hand-finished wood veneers, polished chrome and hand-stitched leather cabin. There's a new satnav and infotainment system - which is borrowed from VW - and new seats, but otherwise it all feels very familiar - and is none the worse for that.

Spend the €270,000 or so it'll cost to land the new Bentley GT in Ireland and you'll not want for anything. There's a 6.0-litre twin-turbocharged W12 engine under the new bonnet with 575hp and 700Nm of torque, four-wheel drive, selectable suspension, a six-speed automatic gearbox and all the leather and wood you could possibly wish for. Standard equipment includes satnav and electric everything, but as with every Bentley there's the option to create a more bespoke car should you wish.

It's the Continental GT's unique range of abilities that make it such a unique proposition in the high-end luxury coup? marketplace. Refinement is greater than before thanks to an acoustic layer sandwiched in the glass, weight drops by 65kg, power increases by 15hp, the gearbox shifts faster and revisions to the chassis improve agility.

The performance on offer remains extraordinary. It takes just 4.6 seconds to hit 100km/h from rest and flat out the Continental GT will reach 320km/h. It remains absolutely effortless to exploit the W12's 575hp, the quick-shifting auto so good you'll rarely find yourself reaching for the paddle-shifters. The engine is hugely flexible thanks to its prodigious torque figure, but it's still worth wringing it out to its red-line for the shocking pace on offer.

Couple that additional power to a chassis that's been heavily revised with wider front and rear tracks, sharper, better weighted steering and a four-wheel drive system with a 40/60 front-rear bias and the Continental GT feels sharper than ever before. There's huge grip on offer, the GT turning in with surprising vigour given its bulk. The initial nose-heavy turn-in quickly neutralises, the GT even exhibiting some throttle adjustability in the bends.

That enhanced agility is welcome, but it's not at the expense of the GT element of the car's character. The cabin is quiet and the ride supple - on its softer Comfort setting - and the drive incredibly easy. Few cars can carry such massive pace with such resolution. Boasting the same huge breadth of talent as its predecessor, but with every facet of its performance subtly enhanced, the new Continental GT offers a rounded driving experience quite unlike any other car on the market with its level of performance.

The Continental GT's usability has improved not just thanks to finer driving characteristics, but also to some more space. The front seatbacks are now scalloped to give more legroom in the back, though it still isn't exactly commodious in the rear cabin - just not so cramped as to make the seats pointless.

Fuel economy improves despite the increase in power, but the combined consumption figure of 16.5 litres/100km (17.1mpg) and CO2 emissions of 384g/km isn't going to win you any friends at the Green Party. It is possible to run your Continental on E85 bio-ethanol as well as conventional petrol, though. Buyers concerned with such things might want to wait until 2012 when Bentley will offer the GT with a 4.0-litre V8. The word is that it'll still offer mighty performance but with huge improvements in economy and emissions.

Nothing touched the old Bentley Continental GT for its amazing breadth of abilities. The revisions making up this new car only further cement its position as an unusually useable super luxurious, super fast car. Quieter, quicker, sharper and just as gloriously sumptuous as ever, Bentley has finessed the GT very effectively indeed.