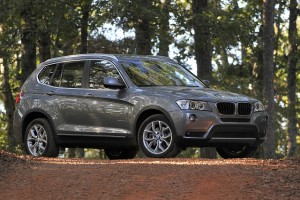 We reckon the new BMW X3 makes the bigger X5 all but superfluous.

An increase in size, suspension that actually works and an efficient, refined powertrain broaden the BMW X3's appeal enormously. Never mind the fact that it's cheaper than its processor. Think of it as an X5 for the new Ireland.

Parked alongside an original BMW X5 at its launch, the new X3's increase in size is obvious. As the X5 has grown, so too has the X3, better to fill the gap left by its relative. Below it sits the BMW X1, though the new X3 does not share its smaller sibling's slightly awkward styling. Instead the X3 is pleasingly chunky: it's obviously a BMW, but more junior X5 than grown up X1.

It's understated without being boring, the X3's style less edgy than before but solid and assured. It looks more expensive too. Inside it feels more expensive, with the build, materials and ergonomics impressing on first acquaintance. Space is increased, so the boot is now among the largest in the class, while passengers have more room front and back than before.

This bigger X3 is lighter than its predecessor, not just on the scales (it weighs 25kg less), but on your wallet. The xDrive20d costs €46,660 on-the-road, which is actually some €4,000 less than the outgoing car. However, less money brings more equipment, as all X3s come with leather upholstery, dual-zone air conditioning and fuel consumption and emissions reducing start-stop technology. To that there's the option to add lots of additional equipment. BMW packages options up into handy bundles or leaves you to pick from a list of acronyms that rivals an explosion in an alphabet spaghetti factory.

Anyone who has driven the previous X3 will appreciate the differences in the new model immediately. The suspension actually works, BMW giving the X3 springs and dampers that both provide agility and decent ride quality. That's a revelation compared to the X3's bone-jarring predecessor.

BMW has seemingly achieved this without losing the car's appealing driving character, as the X3 steers sharply. The 2.0-litre turbodiesel revs smoothly and easily copes with the car's decreased bulk. The standard six-speed manual gearbox feels like all BMW's manuals, so it's oddly springy but pleasingly accurate. There's the option of an eight-speed automatic - which benefits from the same stop-start system as the manual - and it's likely to be a big seller. There's no need for the optional Dynamic Drive Control though; the X3 drives well enough without it. It's refined too, with little wind or road noise, while you only ever really notice the engine rumble when it stops and starts at traffic lights and junctions.

The X3 feels more mature and bigger, yet no less wieldy when compared to its predecessor. The improved refinement, substantially better ride comfort, interior quality and additional space in all give it gravitas to make it feel like a genuine X5 understudy - rather than underling.

Cleverly, the stop-start system doesn't switch off the engine when it anticipates that a quick start from a junction is required. The X3 also features BMW's usual suite of EfficientDynamics fuel and emissions improving technology. Along with the stop-start there are low-resistance tyres, on-demand auxiliaries, electronic power steering and regenerative brakes. It all adds up to one of the cleanest premium 4x4s you can buy, with emissions of just 147g/km - that's Band C for tax.

BMW's new X3 is a major step forward from the flawed original. Larger, more efficient, better performing, more comfortable and, crucially, better able to isolate occupants from bumps and ripples in the tarmac, the X3 is a capable, desirable alternative to BMW's own X5. That it has achieved all this with less weight, more equipment and for less money only adds to its appeal.