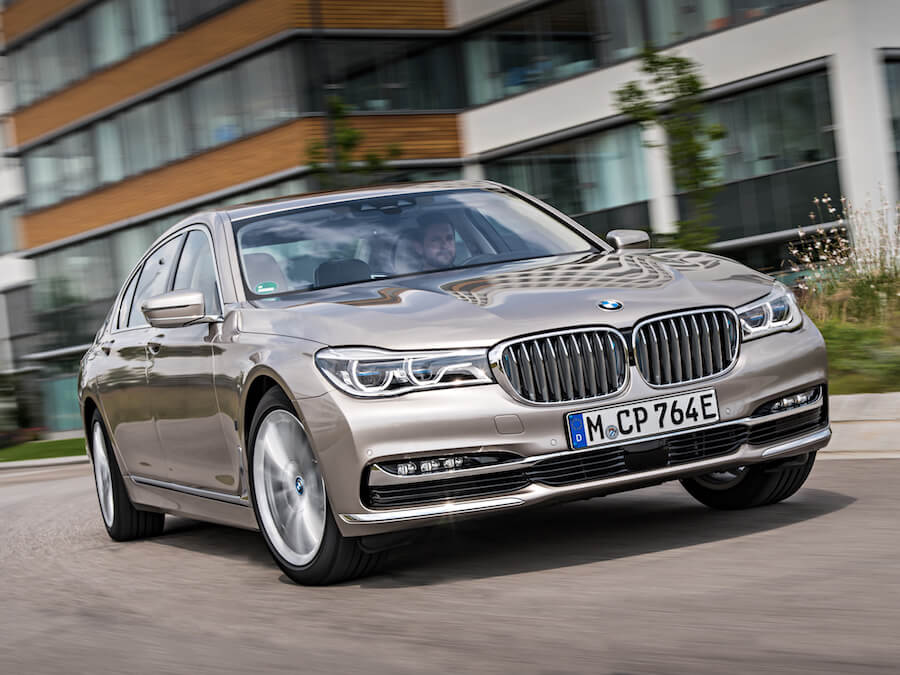 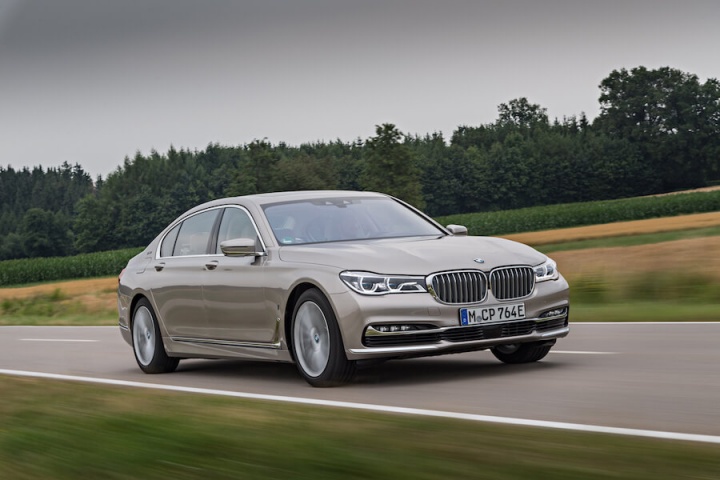 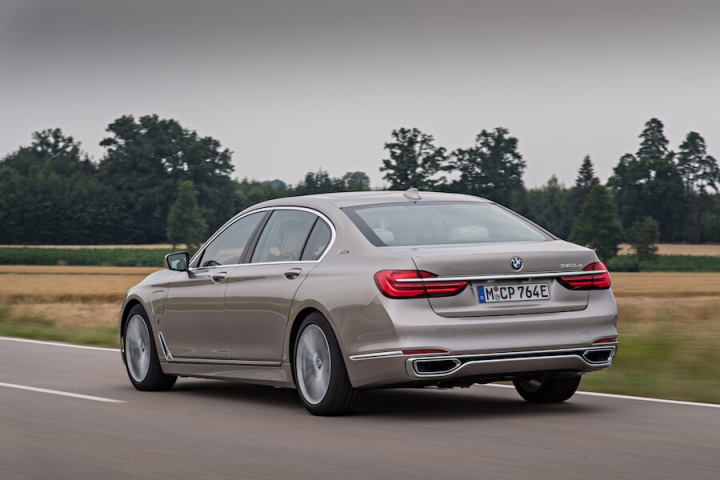 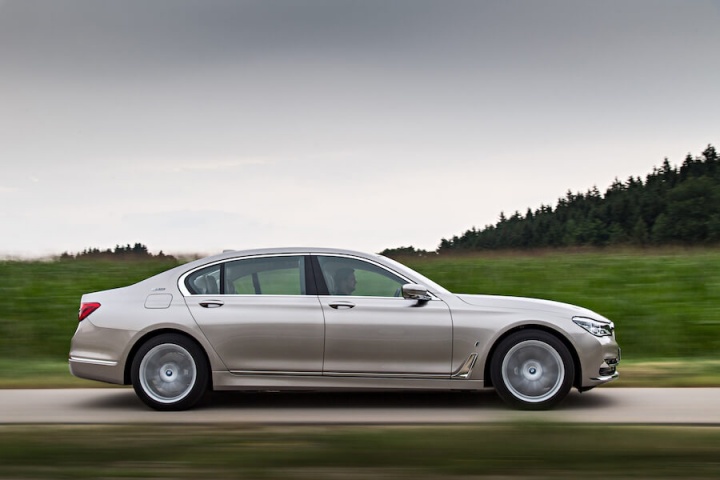 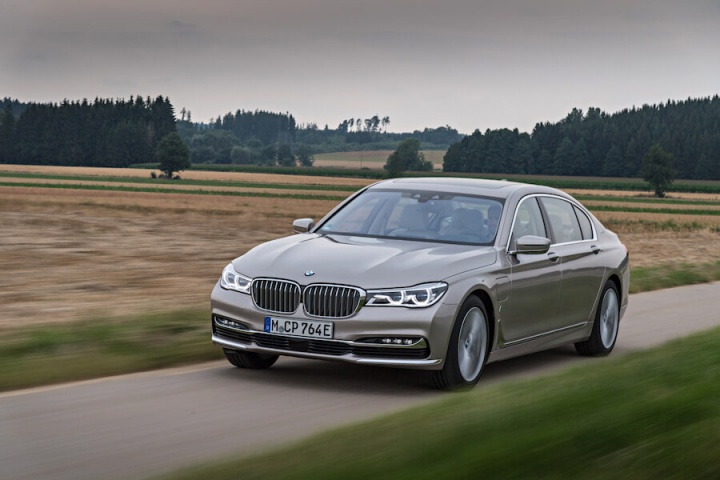 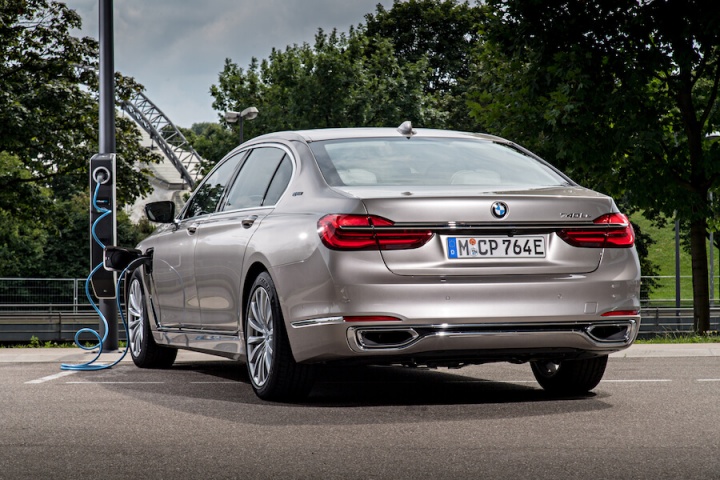 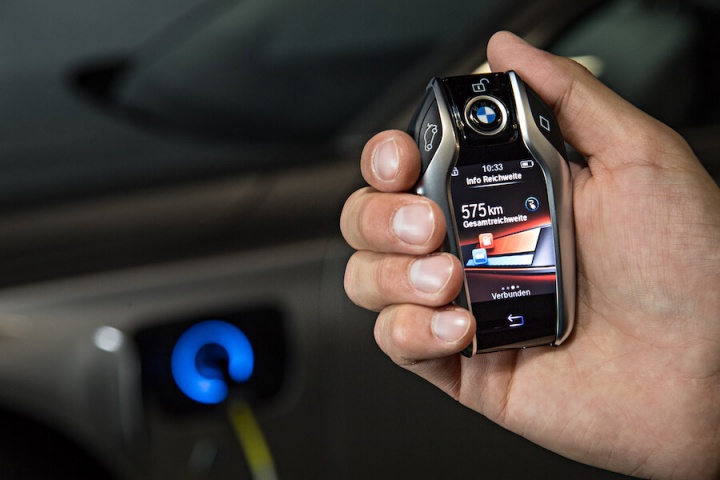 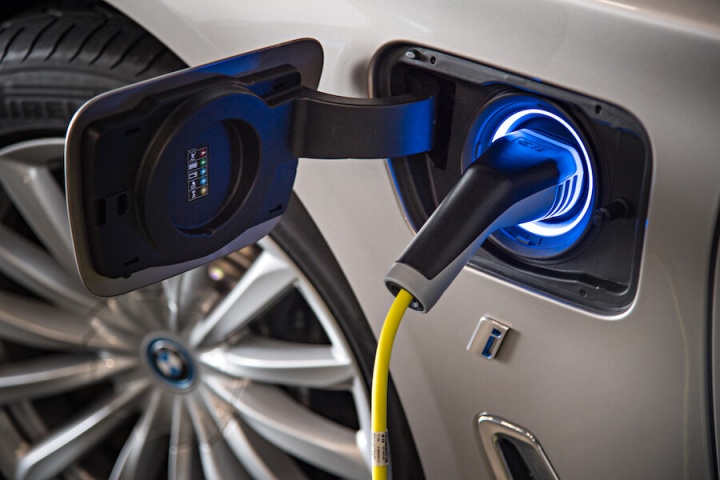 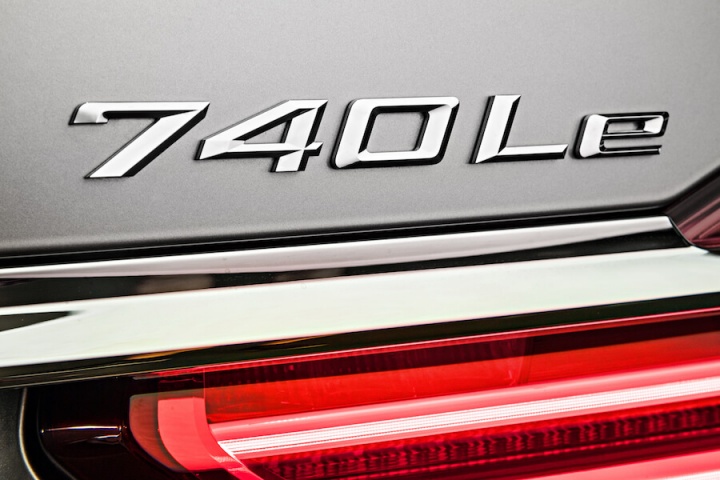 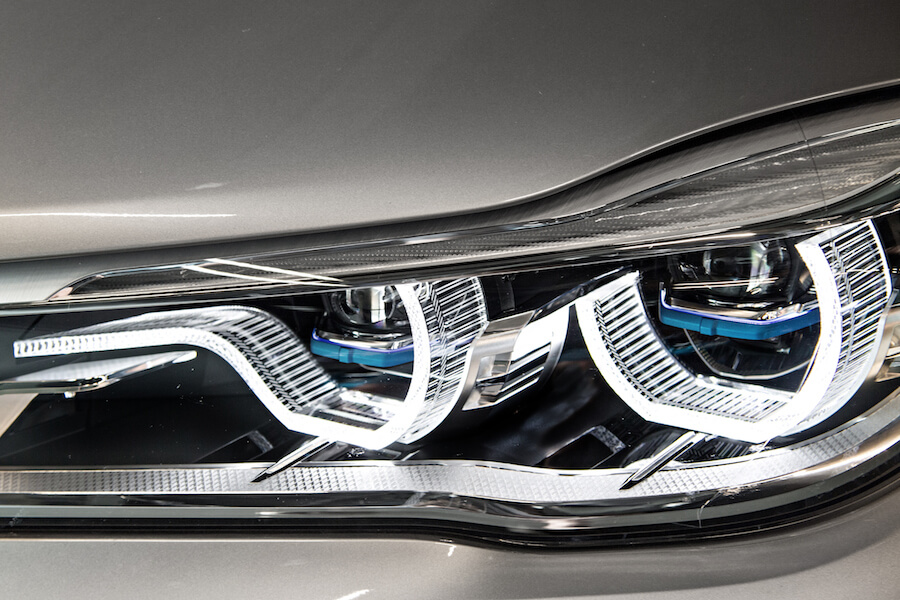 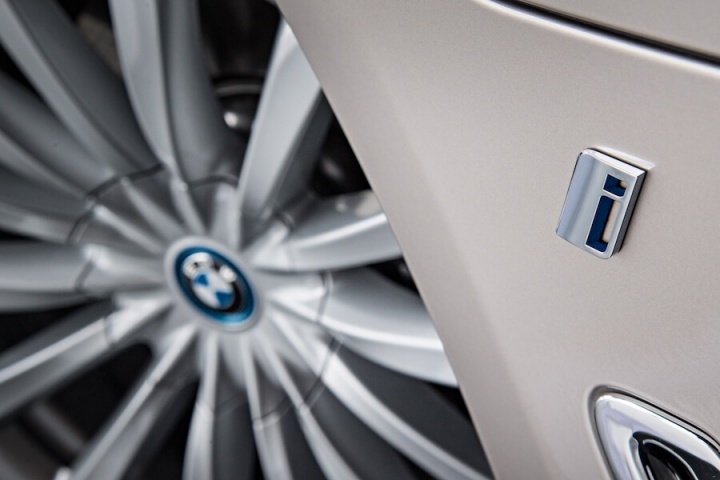 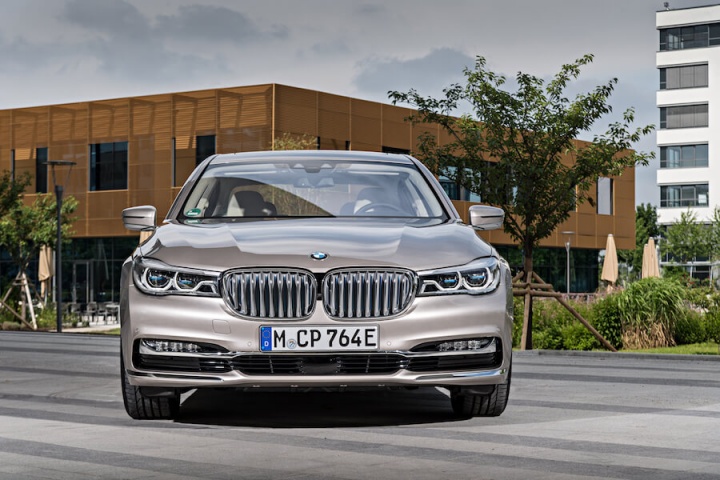 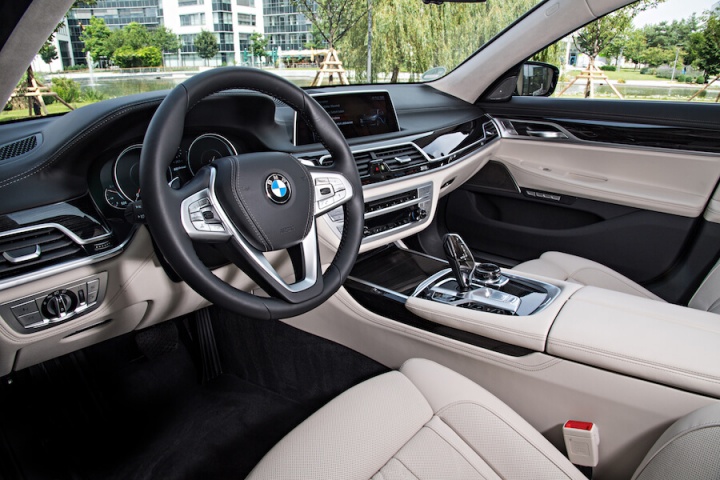 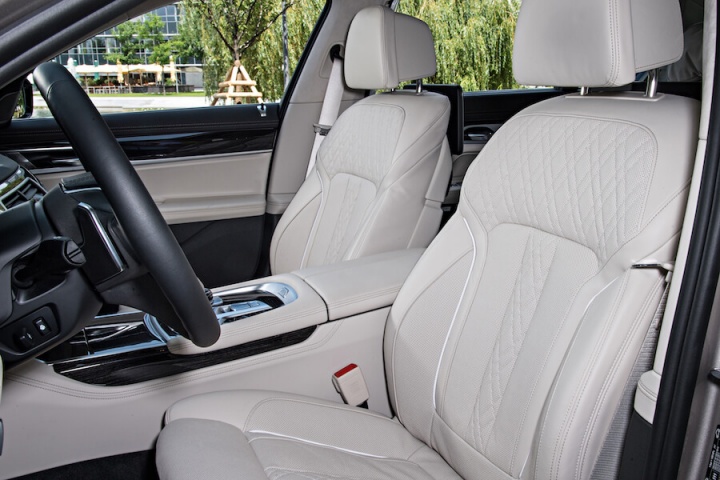 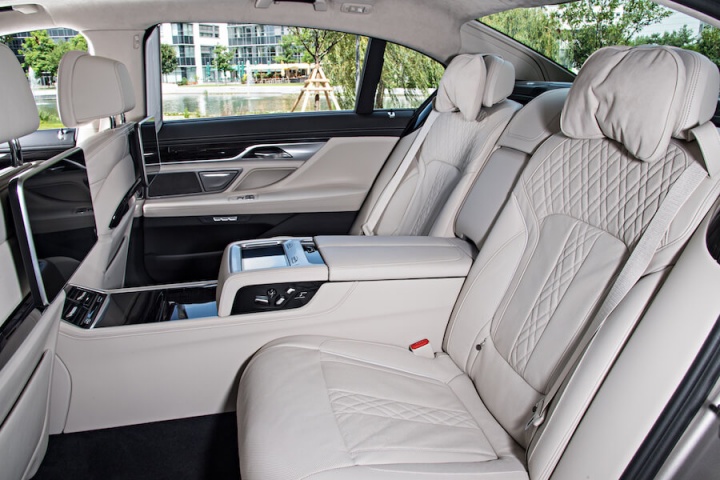 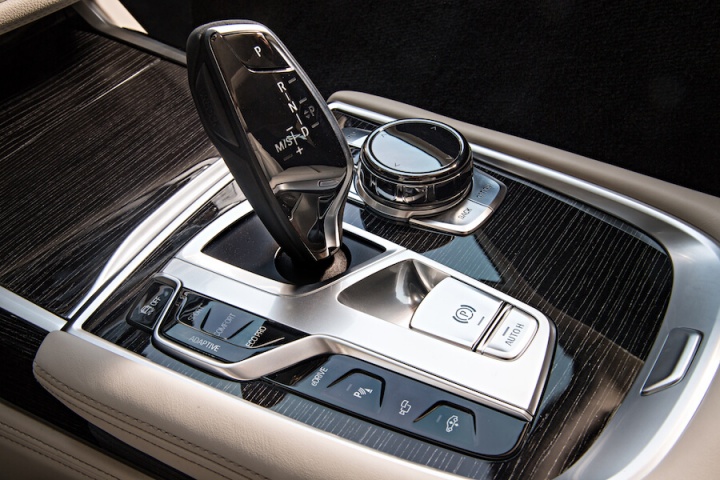 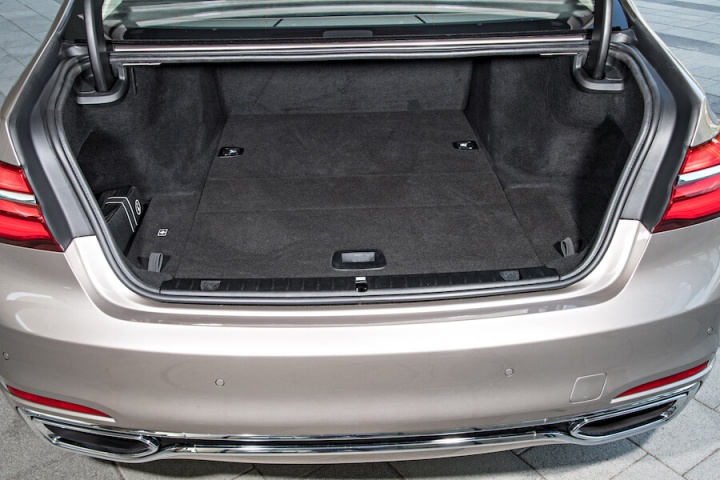 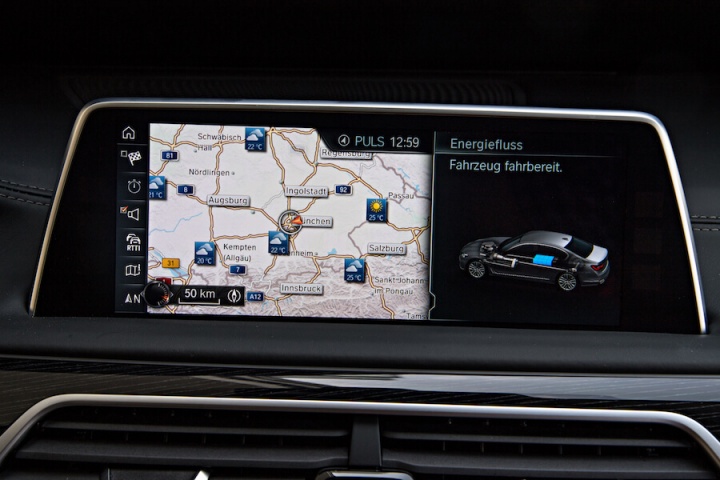 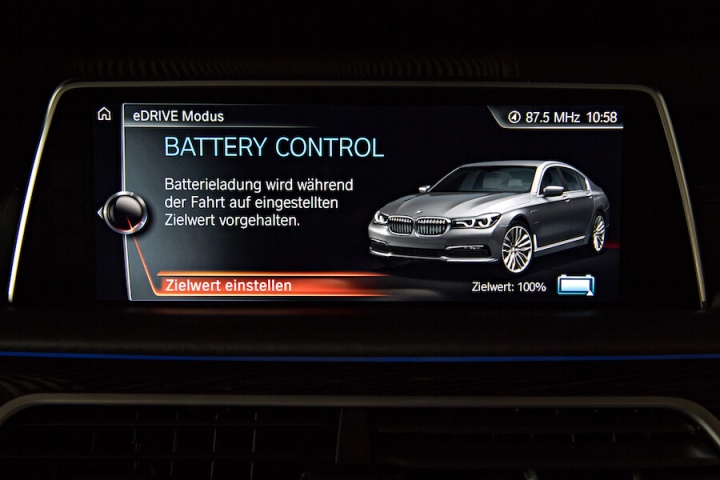 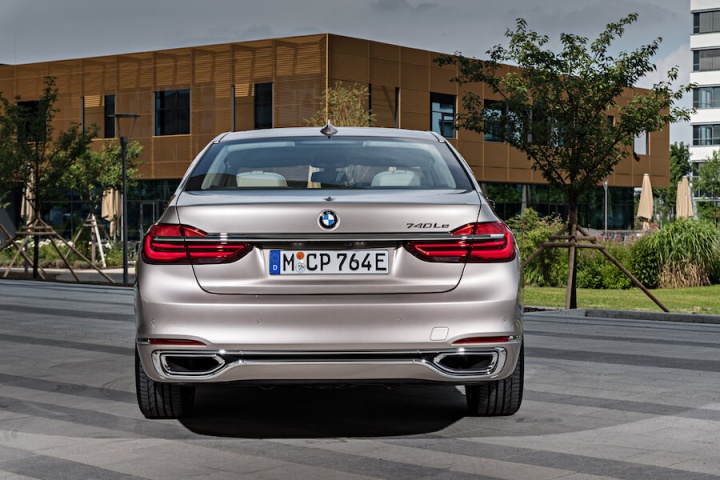 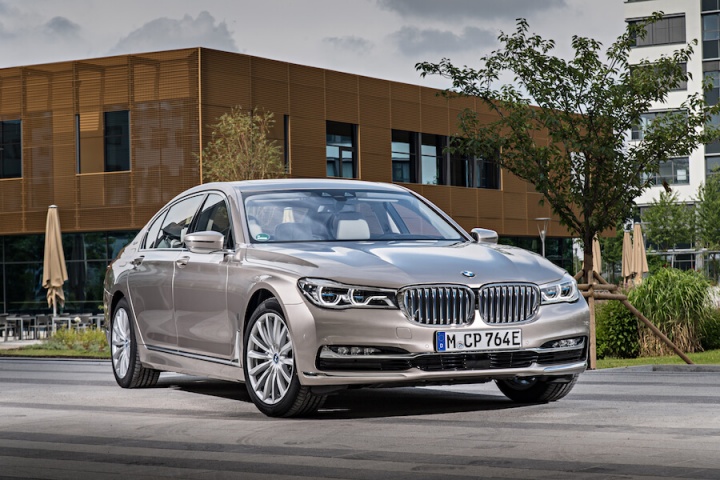 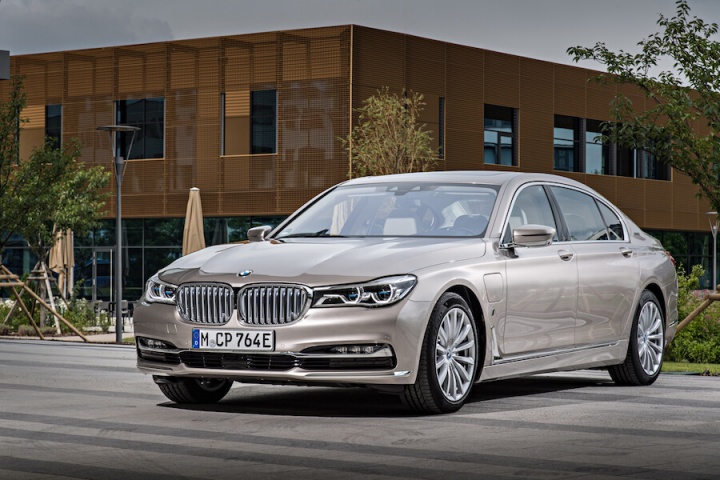 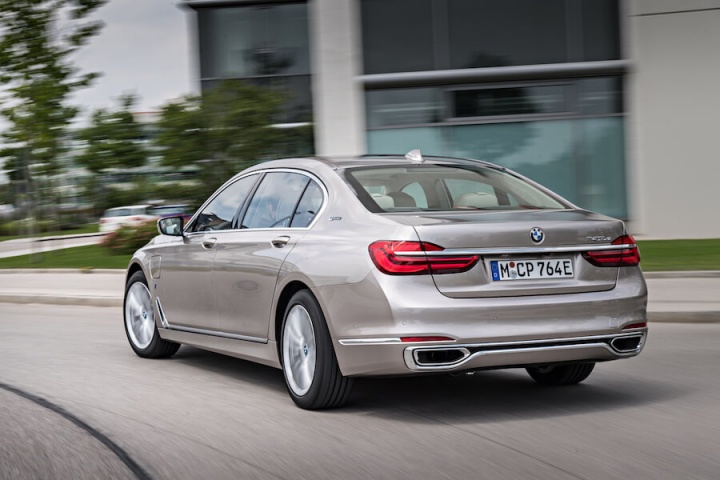 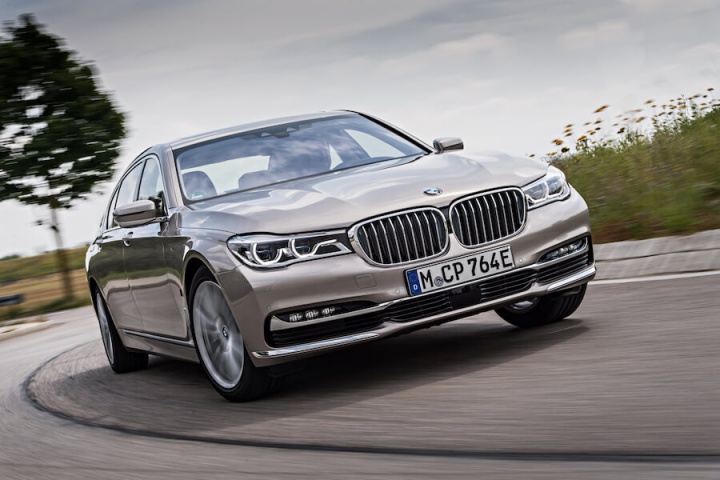 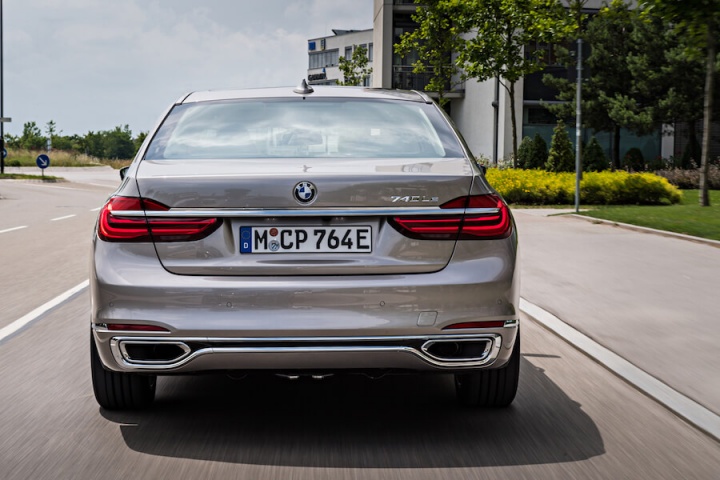 iPerformance? Ay caramba! The BMW 740Le is a phenomenal PHEV.

Very little is different about the BMW 740Le xDrive iPerformance compared to, say, a 730d. BMW claims it wanted people to be readily aware that customers of the Seven PHEV were driving the hybrid, but you'll need to be fairly eagle-eyed to spot the blue highlights in the twin kidney grilles or small rings of blue surrounding the propeller roundels on the alloy wheels. Much better to clock either: a) the plug-in charging 'filler' flap on the 740Le's nearside front wing, or b) the badging liberally applied to the big BMW's exterior. Aside from the 'Le' after the model number (or just plain 'e' if you've not opted for the long wheelbase), there's an 'eDrive' logo on the C-pillar and then perhaps the key addition for some new BMW family branding, which is a blue-tinged 'i' aft of the wheelarch. Look, you can see it, just there - nestled between the plug-in port and that upswept bit of chrome trim leading from the sills.

Imagine, if you will, the core BMW models - for example, just your regular or garden 3 Series or similar - at the centre of a five-point axis. Going to the left, you have M Performance models (e.g. the M235i, about to be replaced by the M240i) at point two and then full M cars (M4) at point one. In the other direction, the i brand - comprising the BMW i3 and i8 - sits at point five. Which leaves a nice, neat gap to be filled by any regular BMW that has felt the touch of the i Division. Thus, iPerformance is born and brings balance to the BMW Group force. Or something. The 740Le might be the first to wear this fresh nomenclature, but it will be appended to all future part-electric models that aren't full 'i-cars' and also the existing BMW PHEVs in the form of the X5 xDrive40e, 225xe Active Tourer and the 330e. Which means that, if you were an early adopter of these three cars and you've got an example without an 'i' on the wing, you could be sitting on a collectible rarity. Maybe not.

Anyway, enough of the OCD corporate naming exercises. Inside, the 740Le is as sensational as any other 7 Series, with the addition of extra gauges for the electrical systems on board and the eDrive control switch on the centre console. It's all laid out and displayed intelligently, while the quality of the fixtures and fittings is of the very highest calibre, so it feels a wonderful thing to sit in front or back. Packaging constraints, though, mean that with the lithium-ion battery pack under the rear seats, both the boot and the fuel tank have been squeezed. The former is down around 100 litres on a normal Seven, to 420 litres in total, while the latter sees a big drop from 75- to 46 litres. Nevertheless, BMW claims that if the 740Le is brimmed with unleaded and the battery is fully charged, you can cover more than 600km before needing to replenish your multiple resources.

This might seem wilfully contradictory of us, to give full marks to the 740Le when we weren't blown away by another physically large, luxury vehicle toting an almost identical drivetrain - that being the X5 xDrive40e. There are some tiny differences to note, in that the 740Le is more powerful and torquey than the X5; overall outputs stand at 326hp and 500Nm here, when they're pegged at 313hp/450Nm for the petrol-electric SUV. The synchronous motor is the same 83kW (113hp) unit, but it's the 2.0-litre TwinPower Turbo up front that packs the gains for the 7 Series, its 258hp and 400Nm making this the most powerful four-cylinder engine BMW has ever built.

And whether BMW has carried out other, hidden tricks to improve the refinement of the drivetrain or not, the bigwigs aren't saying, but within about 500 metres of driving the 740Le you realise this is easily the most superb non-i BMW PHEV yet. The Seven's Carbon Core technology manages to stop it feeling as hefty as the X5 40e and with masses of sound deadening - as befits a Teutonic flagship - the added bulk of the Li-ion battery pack and the xDrive system, and the ability to waft around on full electric power without any vibration from the engine, this is luxury motoring honed to the ultimate degree. Any concerns that a four-cylinder 7 Series would be needlessly coarse go flying out of the window as you hum along in sumptuous comfort and reverential silence.

Honestly, the ride in Comfort Plus mode - one of the three selectable set-ups from the Drive Performance Control - is faultless. The 740Le just glides along in a cosseting realm of its own, totally disconnecting you from anything up to and including the most troublesome of road surfaces. Things aren't even spoiled once the 2.0-litre petrol is called into action, as it fires up and dies away with not so much as a twitch being transmitted through seats, pedals or steering wheel. Flat out revving it brings a very muted and rather pleasing growl in the 5,000- to 6,000rpm range, but at no point do you think this drivetrain is the weak link of the 7 Series range.

In fact, you start to wonder why you'd want any of the others. The 740Le xDrive can go 45km on electric power alone (the lighter, rear-wheel drive 740e and 740Le siblings go a little further at 48km) and there are three additional settings controlled by the eDrive switch. There's still Auto eDrive (EV top speed limited to 80km/h, car decides how to best use electric and petrol power according to conditions) and Max eDrive (full zero-emissions running, 140km/h top speed and 4,000rpm limit, petrol only activated by throttle kick down), but instead of Save, now we have Battery Control. This allows the driver to select a recharge level for the battery of between 30 and 100 per cent, using the iDrive controller, and then the petrol engine will act as a generator to try and achieve that level while the car is cruising along a motorway or similar. It's all very clever and it all works intuitively.

Furthermore, the performance is more than enough for executive needs (the Le xDrive being the quickest of the three PHEV Sevens to 100km/h, its four-wheel drive traction bestowing it with a 5.3-second split) and the road holding is even better than we remember it on the 750i, presumably thanks to the fact there's not a honking great V8 engine sat over the 740Le's front wheels. Whether ambling along or going at it hell for leather, dynamically the 7 Series hybrid will not let you down.

All right, it's not quite flawless in all departments. Yes, the steering remains a bit too light for a sporty car, but then luxury limos like this should be just that, luxury first and foremost. And despite this tiny handicap, the 740Le still drives better than anything else in its class when you firm up the air suspension and sharpen all the controls in Sport mode, whereupon it can do a mighty fine impression of a hard-charging, big-engined 5 Series.

And sure, the official 134.5mpg (2.1 litres/100km) economy figure remains farcical. However, let's just say this: when we drove the 730d short wheelbase last year on the international launch, we got 33.2mpg (8.5 litres/100km) out of it on a mixed test drive route in which we drove it quite hard for some of the time and then tried to eke out the fuel economy for the remainder of the journey. On a very similar test route and handled in the same way - periods of enthusiastic driving interspersed with revelling in the unmitigated splendour of the 740Le's cruising manners - we managed to achieve 36.2mpg (7.8 litres/100km) with this latest Beemer hybrid. As far off the quoted numbers as that is, we reckon it still makes the PHEV the real-world economy champ of the Seven line-up, and of course it qualifies for all sorts of tax breaks and grants thanks to its NEDC data that should make it much cheaper to run. Especially if you can charge it on a regular basis and make the most of that e-motor.

BMW has confirmed that the 740e will cost from €90,810 on-the-road in short wheelbase, rear-wheel drive format, making it the cheapest 7 Series money can buy in Ireland, as that undercuts the 730d by nearly €6,000. That price for the 740e includes the SEAI grant and VRT relief. The long wheelbase model, however, the 740Le, starts at €105,260, because, with emissions of 54g/km, it only qualifies for the VRT relief, not the SEAI grant, so it is about €3,000 more than a long wheelbase 730d.

Audi A8 Hybrid: this isn't a plug-in model and the A8 is due to be retired any day now, so BMW will have to wait for a serious challenge from the next-generation machine from Ingolstadt.

Lexus LS 600h L: ludicrously expensive, technologically outmanoeuvred, it has a CVT... the Lexus would not stand an earthly chance up against the 740Le.

Porsche Panamera G2: there will definitely be an S Hybrid version of the forthcoming second-gen Panamera, which is no longer a terrifyingly hideous car. Should be good, then.

Whether you agree with our five-star rating of the BMW 740Le xDrive iPerformance comes down to your opinion of the Mercedes S-Class. If you still think Stuttgart has the edge on Munich, then you won't be swayed by the 740Le. But since it launched last year, we've always reckoned the new Seven is the car to finally depose the Merc from its throne and if what you want is an executive barge that's fun to drive, possessed of supremely cultured manners, almost criminally cheap to run and yet as amazingly tech-laden and comfortable as anything else, then this utterly marvellous BMW hybrid has to be your first port of call.