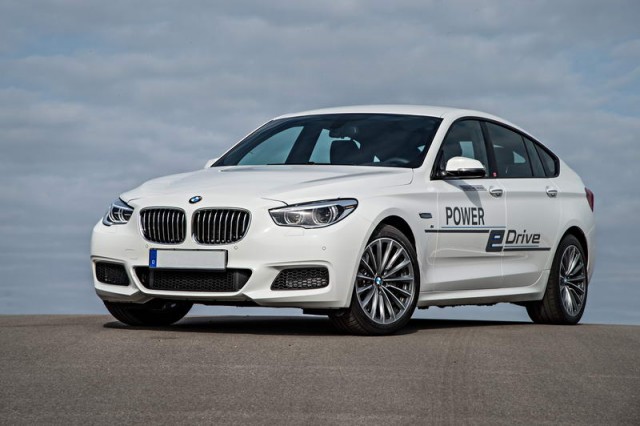 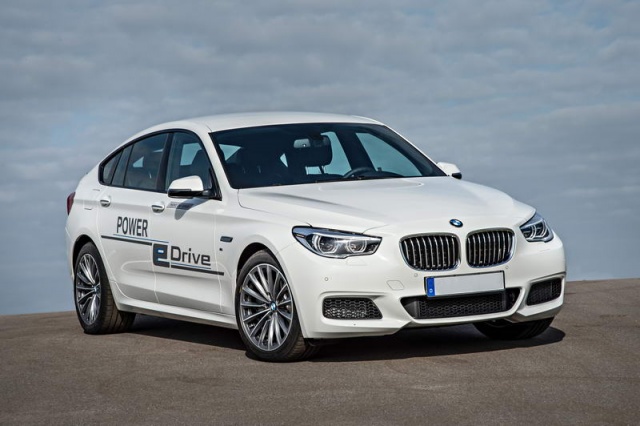 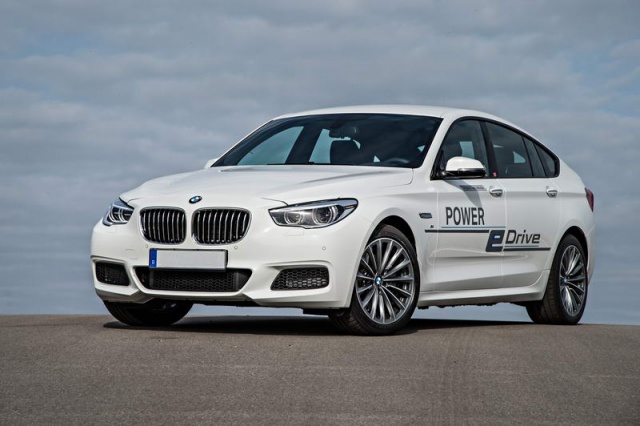 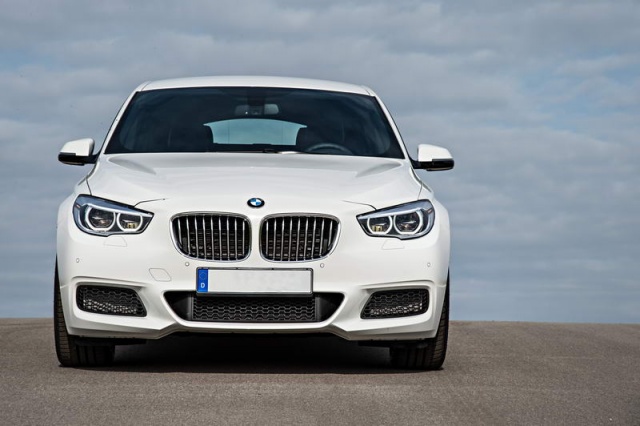 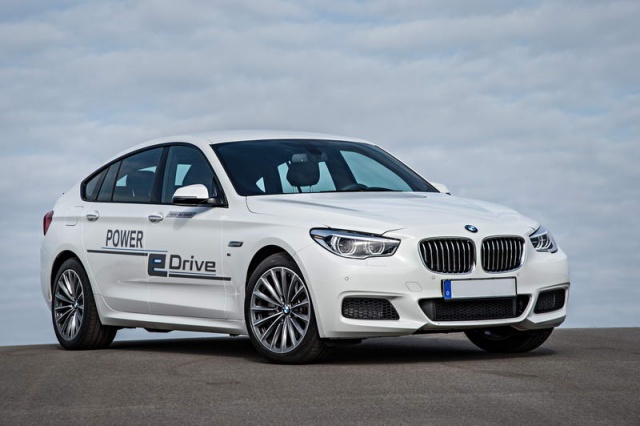 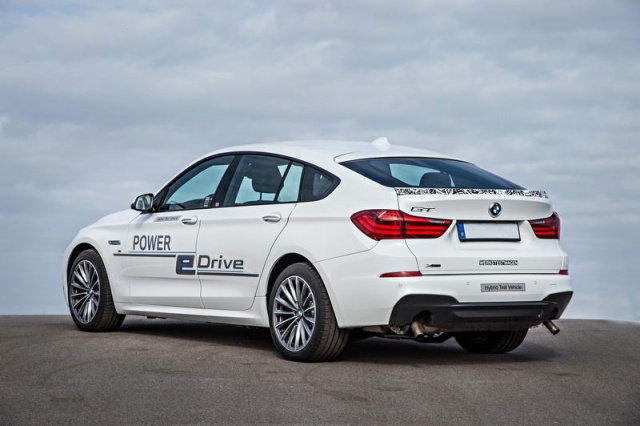 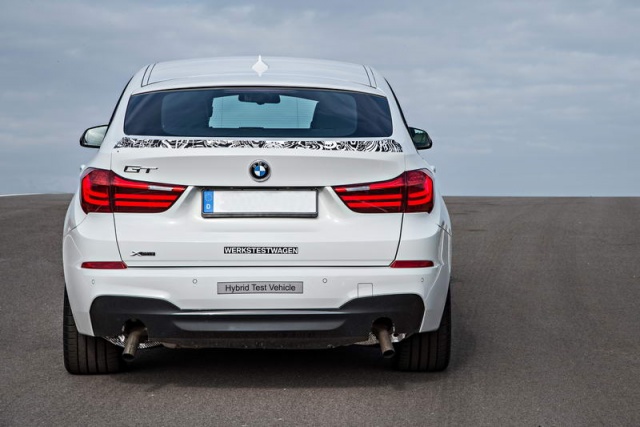 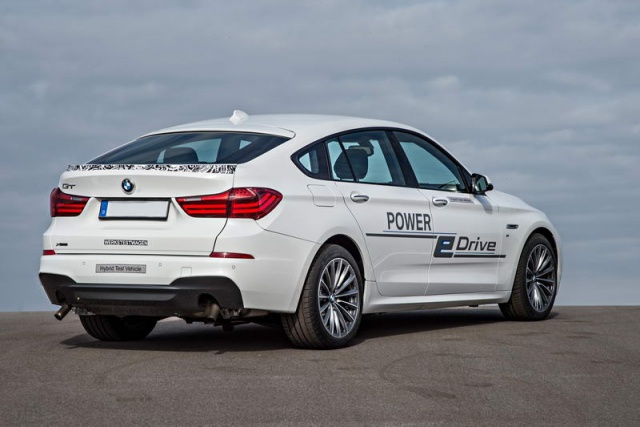 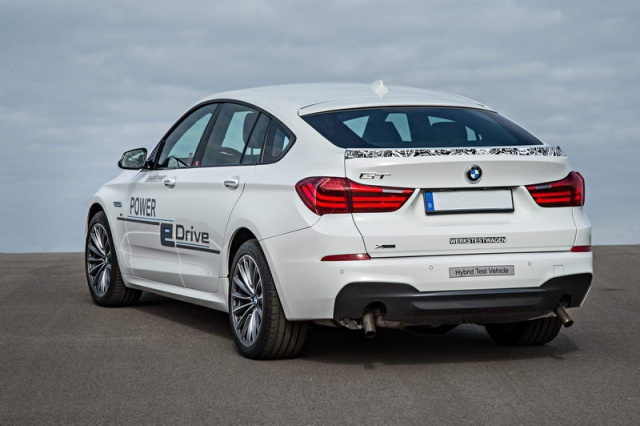 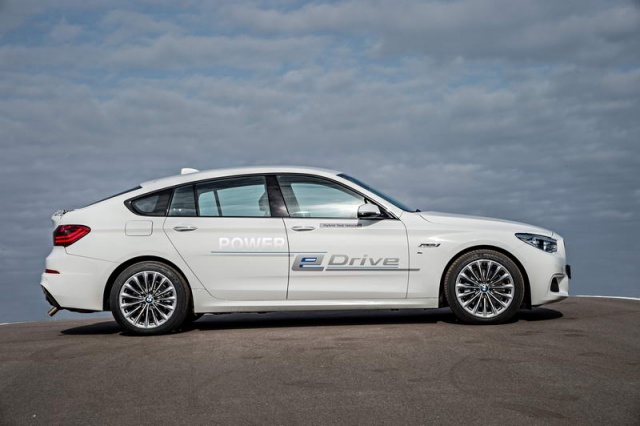 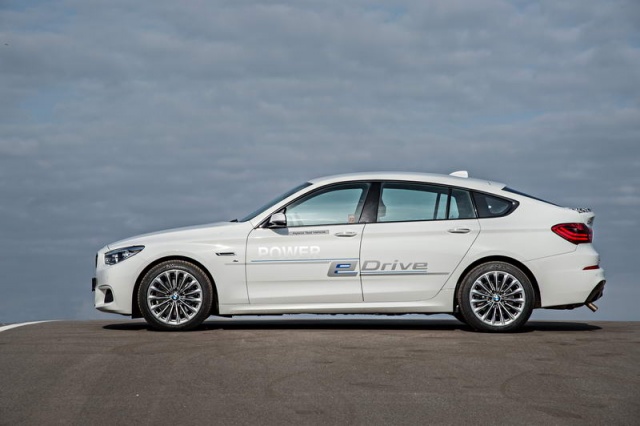 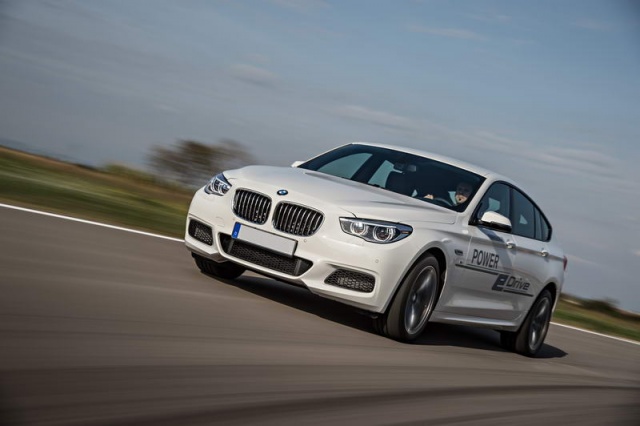 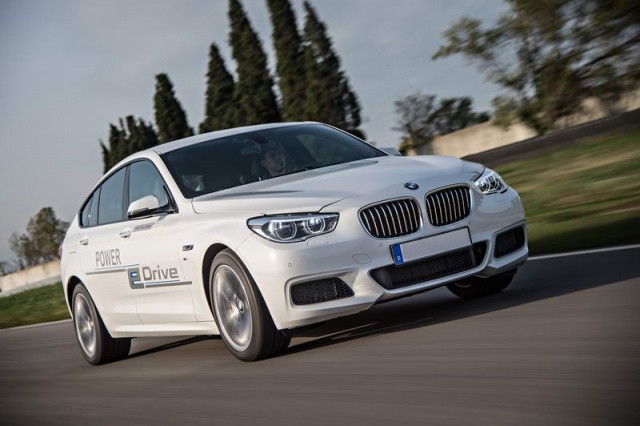 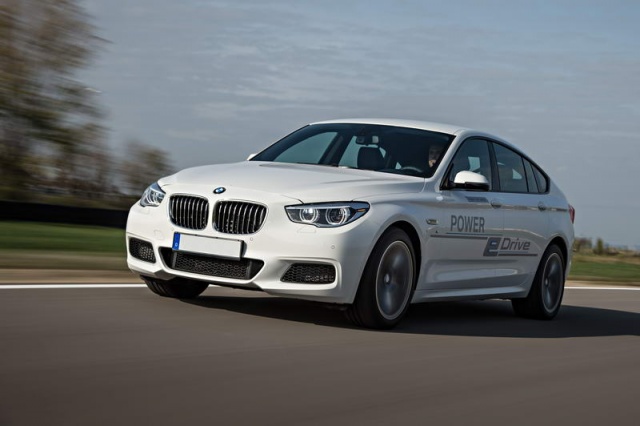 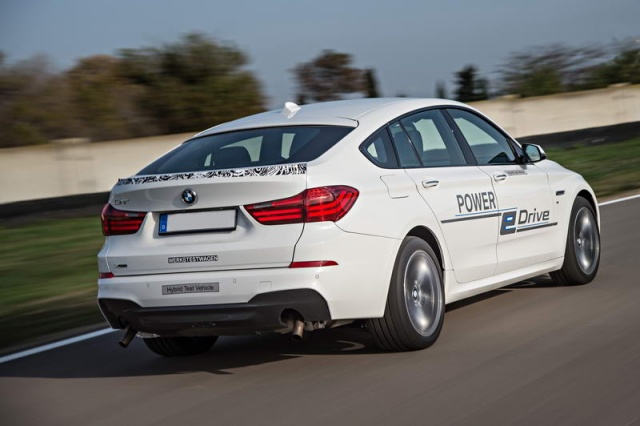 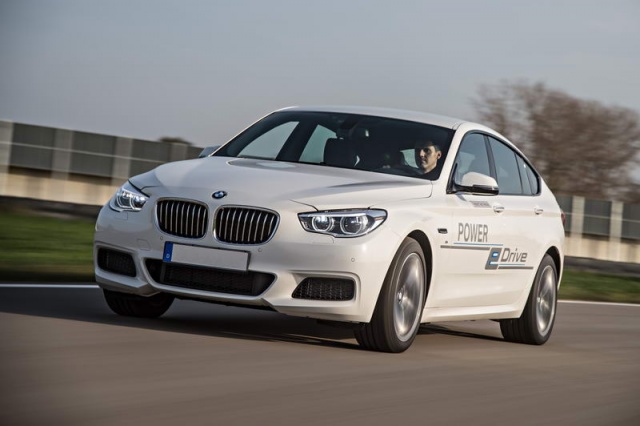 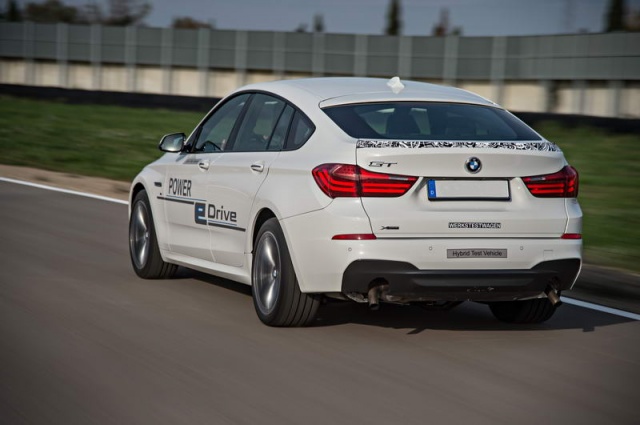 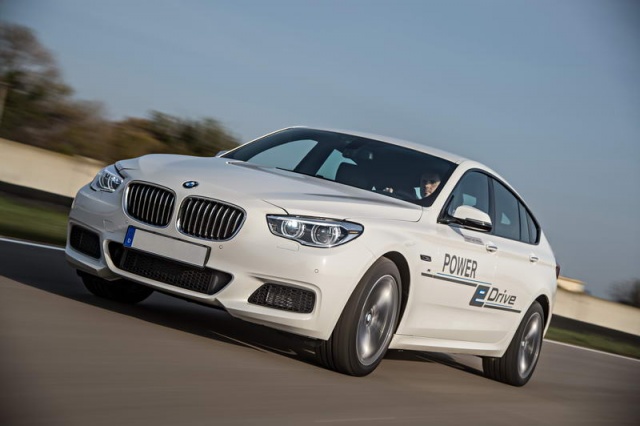 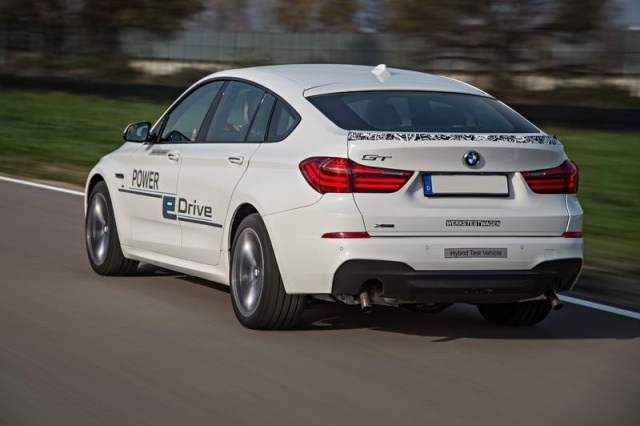 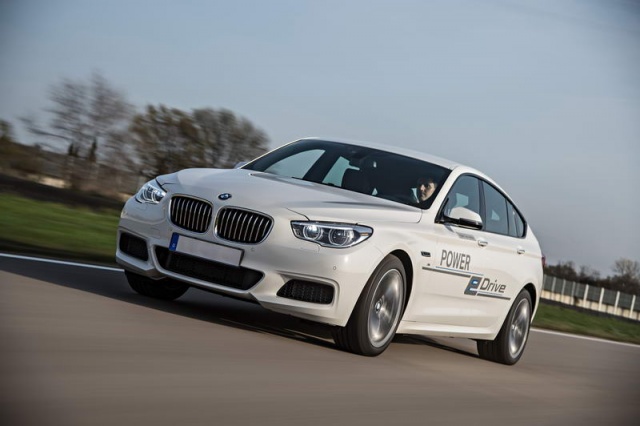 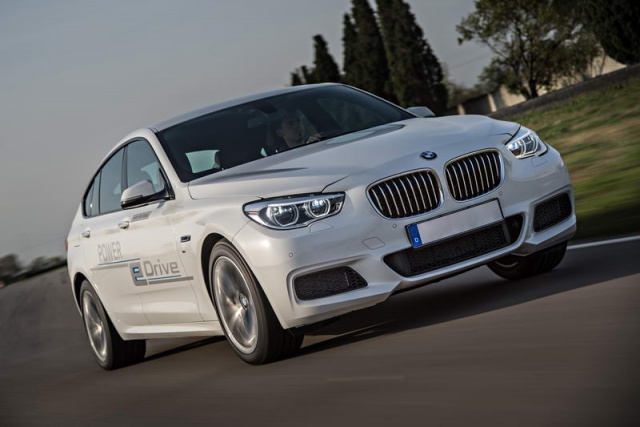 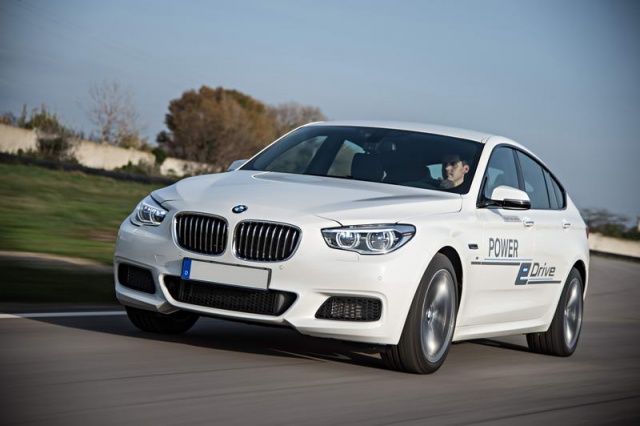 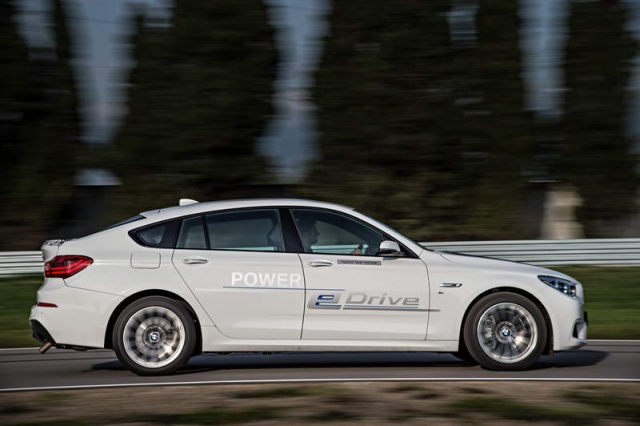 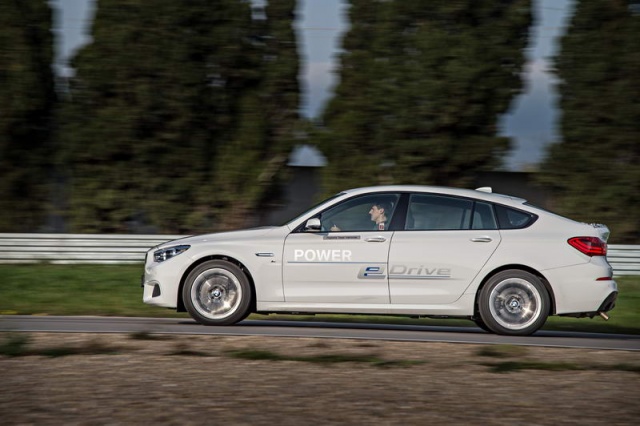 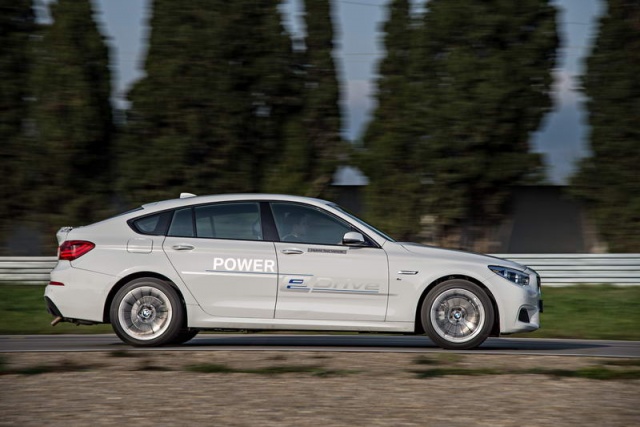 BMW is planning further electrification of its drivetrains in larger models capable of delivering eye-opening levels of performance. We sampled a working prototype from the passenger seat to get a flavour of what is to come.

Don't let the 5 Series Gran Turismo bodywork fool you; this vehicle was merely chosen as a method of clothing the drivetrain prototype in something that was the right size to accommodate the larger-than-normal battery and powertrain setup.

As with most development cars, the interior, although appearing standard, is in fact full of additional equipment - such as a dash-mounted laptop computer - to enable everything to work, while the instrument binnacle was masked off to prevent our eyes from seeing everything.

What lies underneath this 5 Series Gran Turismo is a complex and interesting arrangement. At the front is a 231hp 2.0-litre turbocharged four-cylinder petrol engine. It's mated to a modified electric motor from the BMW i3 producing 203hp. This is neatly located where the torque converter for the eight-speed automatic transmission would usually be found. Both the engine and electric motor can drive the front wheels while the combustion engine can also be used to charge the car's lithium-ion battery in a steady state mode.

That lithium-ion battery is a large, T-shaped 20kWh unit located in what would normally house the transmission tunnel and under the rear seats - in a bid to retain some balance in the car's weight distribution. A second electric motor producing 271hp is housed in the car's rear axle and drives the back wheels. This is a custom built unit that was manufactured in-house by BMW.

With this being a one-off prototype still in the very early days of development our time with the car was limited to being in the passenger seat. Nonetheless we were still able to experience the prodigious amounts of power generated by this car in its three different driving modes.

The first, and one BMW claims is likely to be used the most, employs the rear-mounted electric motor to drive the back wheels with power coming from that 20kWh lithium-ion battery. Its large capacity means that the all-electric driving range can be extended up to 100km, giving greater versatility in everyday commutes.

When more performance is called upon the front electric motor is activated, which then brings all-wheel electric drive to the car giving it a very noticeable boost in power while the added stability of all wheels being driven ensures that the car, despite its substantial kerb weight feels planted when cornering.

When the battery's charge depletes, the petrol engine fires up and enables the car to continue driving under electric power with the four-cylinder motor staying at a steady speed to act as a generator. Even at this stage it is not driving the wheels. Only when maximum acceleration is called upon does the petrol engine then send its power through the front wheels giving the system its full 680hp. The roll-on power when driving is highly impressive and with most of the system's 1,000Nm of torque coming from the electric motors the standing-start performance can almost rival a modern supercar's.

At present this system remains several years away from series production and when it does it is likely to command a price premium. Even though it is housed in a 5 Series Gran Turismo right now, it is more probable that a finished system will be offered in the next-generation 7 Series and possibly the forthcoming BMW X7 luxury SUV, which is planned for 2016.

Even though the high levels of performance undoubtedly make this an impressive car, the system is capable of meting out much lower levels of power. The modular nature of its design means that it can run power outputs from 250hp right up to the 680hp experienced here. There is no word yet on how low the emissions for such a system would pan out, but given the 50g/km rating seen in the 3 Series plug in-hybrid prototype we drove, it should still be impressively low for the power outputs offered.

It may be some time before we see this kind of high-performance hybrid system appearing in production BMWs, but given the relative success that Tesla is having with its Model S, BMW will be keen to advance this technology as quickly as possible, as there is a growing demand, particularly in upmarket vehicle segments, for such systems. And being able to enjoy high levels of performance without the associated fuel and emissions costs will be an added bonus to prospective buyers.