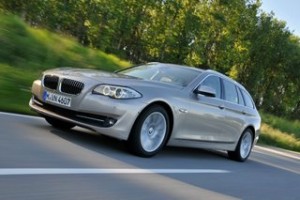 BMW's new 5 Series Touring arrives in September and makes you wonder: do you would need an SUV?

The estate car has always had a massive following in Europe, especially in Germany, where every second BMW 5 Series is a Touring model. The same is not true in Ireland, where even in the Celtic Tiger years, we overlooked the estate car in favour of the SUV.

Now, that segment has been butchered by recession and taxation laws, yet buyers still want practicality and prestige. So perhaps we will finally see the estate car gain some more followers. BMW hopes to be part of that renaissance with the new 5 Series Touring, which goes on sale in Ireland in September.

The latest 5 Series has a much more restrained, yet perhaps more elegant, design than the model it replaced, and these days, where a Touring is designed from day one rather than a hastily cobbled together afterthought, it won't surprise you to hear that in the metal this is a handsome and beautifully proportioned car.

This is the fourth generation of the estate and perhaps the most considered design. BMW tells us that this has the longest wheelbase in the class, yet has very short overhangs. It still needs to be practical and with 560 litres of space with the seats up and 1,670 litres with them folded, then it certainly ticks that particular box. Rear seats that split 40:20:40 and fold add to the practicality and there are clever ways of storing your objects to prevent them from sliding about, including some ingenious mountain bike holders, for the energetic type.

The backrest angle of the rear seats is variable by up to 11 degrees. Additionally it can be folded down using two control levers inside the luggage compartment, the loading space cover of which is automatically lowered when the tailgate is closed. The separately opening rear window automatically swings upwards at the push of a button, which is especially handy if you are parked in a tight spot.

We only spent time in the 520d, with a six-speed manual transmission, although this is perfect for the Irish market as it will make up the overwhelming majority of sales.

This car now has 184hp and is super-clean too, with emissions of 137g/km as a manual and 139g/km with an automatic transmission. Although the four-cylinder 520d isn't quite as smooth as the six-cylinder versions of the new 5 Series, it certainly feels more than capable.

On a mixture of twisty country roads and autobahns the car felt refined and well planted. The steering is very good and there is no sense that you are driving a larger, heavier vehicle. Our test cars featured the Drive Dynamic Control (DDC) chassis configurator, where you can choose between Normal, Comfort and Sport set-ups and the car really does stiffen up if you opt for the sportier ride, but this is an option that few are likely to choose in Ireland.

With all the handling prowess of its saloon sibling, generous luggage space and perhaps most importantly, emissions that mean it will be reasonably cheap to run, the new 5 Series Touring does everything more expensive SUVs do, aside from let you see over traffic. It is a superb family vehicle and a great all-rounder.