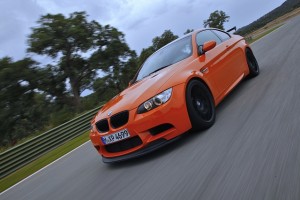 The limited edition GTS marks 25 years of the BMW M3. We've driven it.

Ever since the E30 BMW M3 was conceived 25 years ago the formula has been a winning one - on road and track. Celebrating that milestone is the new, limited edition, BMW M3 GTS.

You'll never mistake the GTS for a regular M3. The first giveaway is the spectacularly orange paintwork, but almost as obvious is a suite of significant aerodynamic enhancements. The massive rear wing is based on that of the 320si World Touring Car and it's adjustable. As are the air deflectors on the deep front apron. Both are finished in black, a colour also applied to the kidney grille, window surrounds and the 19-inch lightweight alloys.

Peer inside and you'll notice that the rear seats are gone; in their place is a roll bar (which may optionally be extended to a full cage). The front seats are racing buckets and owners can choose to use a six-point harness or a regular safety belt. Tactile Alcantara covers the steering wheel and the inside of the doors. The cabin looks particularly bare due to the deletion of much of the regular M3's standard equipment, but it emphasises the purpose of the GTS.

Although all examples of the M3 GTS are supposedly sold BMW has not announced the price as yet. We believe that just 10 right-hand drive versions will be made and that they'll all go to British buyers. A look around the cabin suggests that they'll be paying more for less. Gone is the iDrive system, while the stereo and air conditioning are optional. A fire extinguisher is included though, as is a revised version of BMW's seven-speed M Dual Clutch Transmission (DCT).

Obviously buyers of the M3 GTS will be interested in something other than the list of standard equipment. Like the new 4.4-litre development of the V8 engine for instance, or the fully adjustable suspension with bigger brakes...

Appropriately, our test time in the GTS was restricted to laps of the Ascari circuit. Before the first corner is reached it's obvious that there's something special under the bonnet. The stroke has been extended, increasing capacity from 3,999- to 4,361cc, resulting in an increase in peak power from 420- to 450hp (at a screaming 8,300rpm). Torque increases too, from 400 - to 440Nm, available at 3,750rpm. The 0-100km/h time drops to 4.4 seconds, but it's the endless sweep of the rev counter needle and the beefier mid-range that stand out.

The chassis has received just as much attention. The rear suspension sub-frame is rigidly bolted to the body and the ride height can be adjusted, as can the damping and camber on both axles.

Reading the specification you'd be forgiven for thinking that the GTS is a clinical lapper of race tracks, clinging to the tarmac while the driver just steers. In fact it's more engaging than any M3 gone before and it is incredibly playful at and beyond the limits of adhesion - limits that are all too easy to breach. There's a delicious sense of throttle adjustability that, while present in the regular car, is even more accessible in the GTS thanks to the extra immediacy in the chassis. The new engine has the power to bite if you get cocky, but even high-speed slides feel safe, gradual and intuitive to work with. In short, it's a fabulous track toy.

BMW quotes a kerb weight of 1,530kg for the M3 GTS, which is 70kg less than a regular M3. Lightweight interior components, a thin-walled racing exhaust with titanium silencers and polycarbonate rear windows all contribute to this.

We were categorically told that BMW will make a profit out of this project. Although demand will significantly outstrip supply the company could not extend the production run due to capacity and the hand built nature of many of the components. To put this car into series production would cost the company a lot more money.

Enthusiasts with the wherewithal to buy a more expensive version of the M3 may wonder why BMW hasn't just made a new CSL instead of the GTS. A lucky few will be counting the days to the delivery of their new toy - no doubt to be added to an already impressive collection. Fans of the M3 brand will rightfully be in awe of the GTS, even if they never get to drive it for themselves.