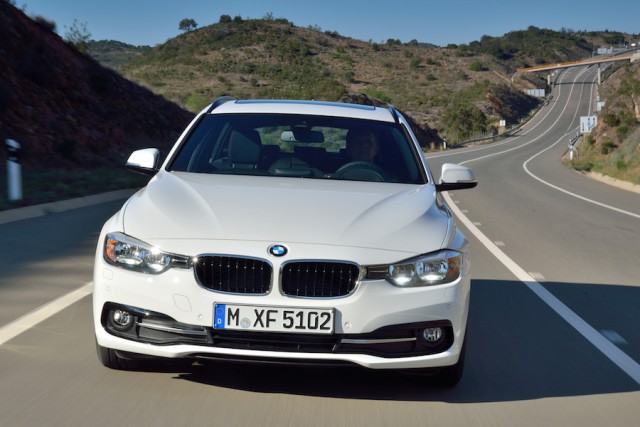 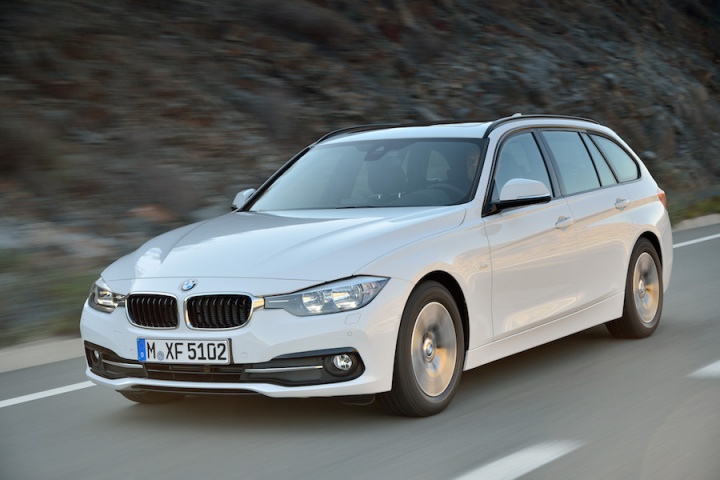 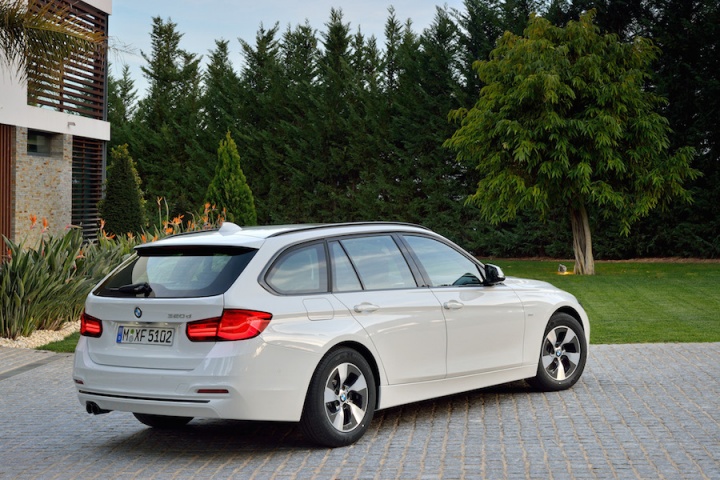 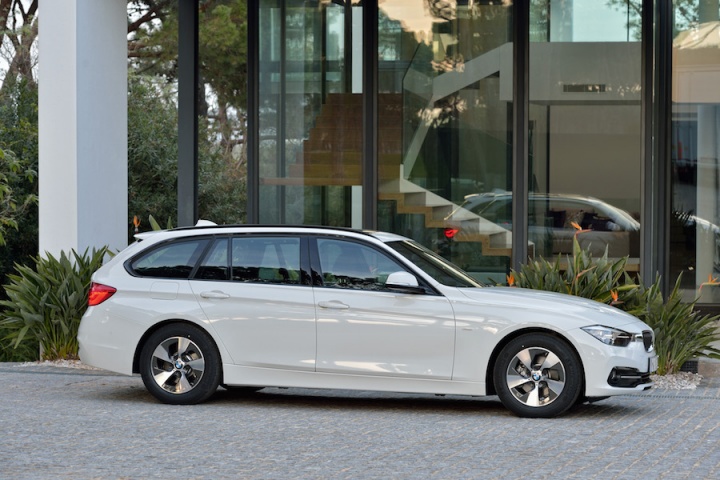 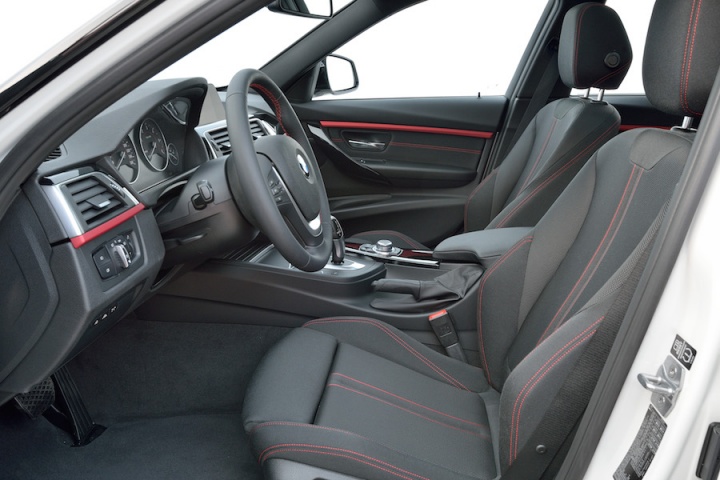 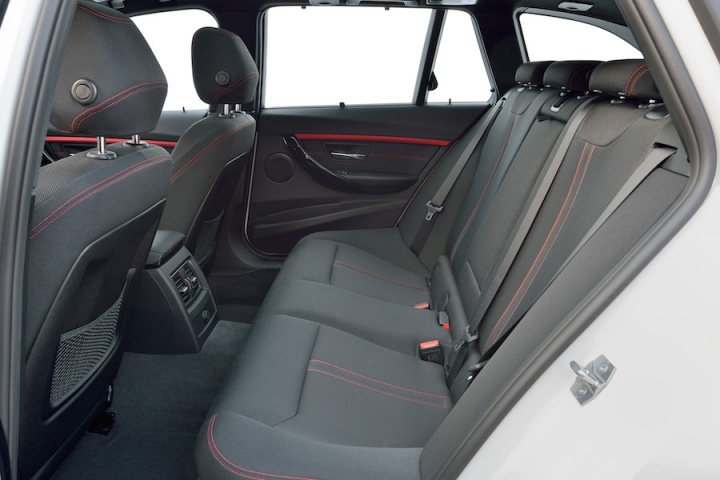 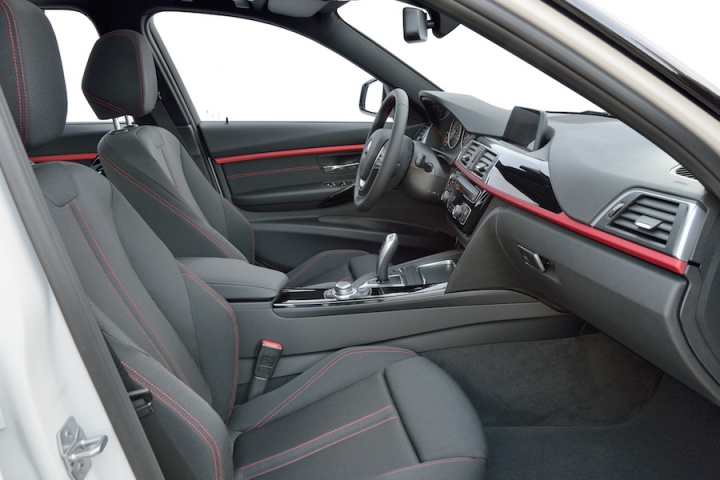 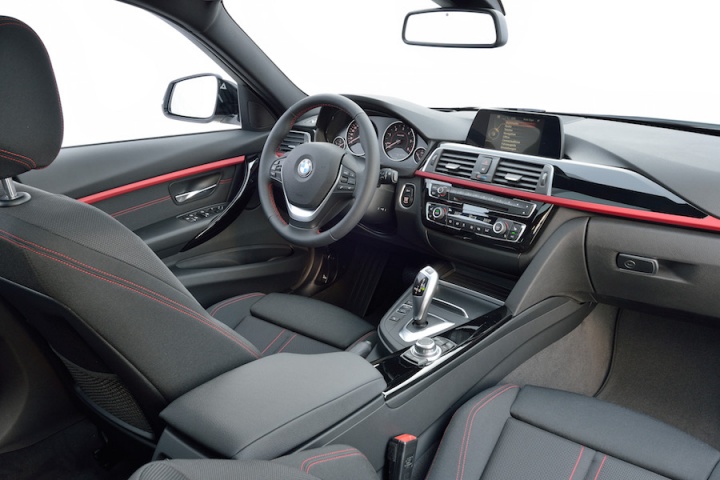 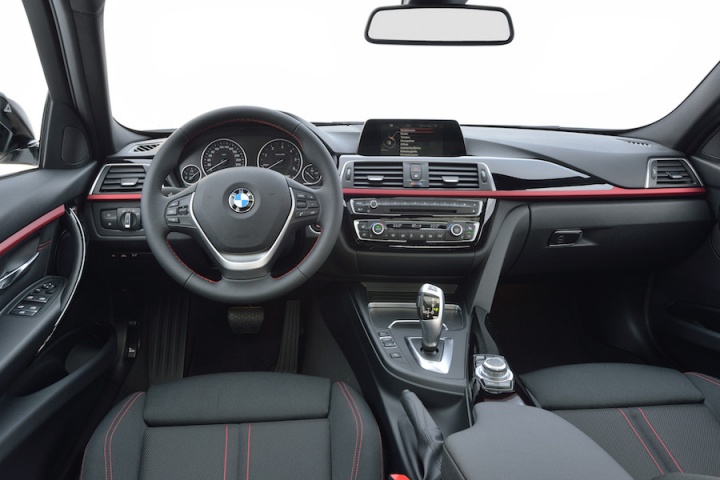 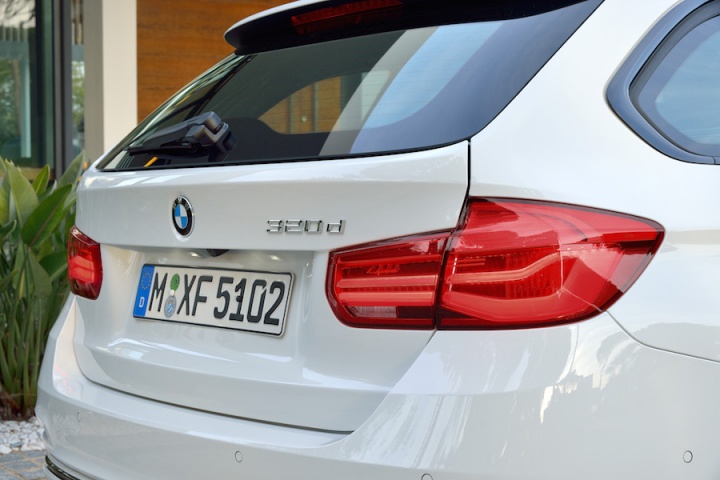 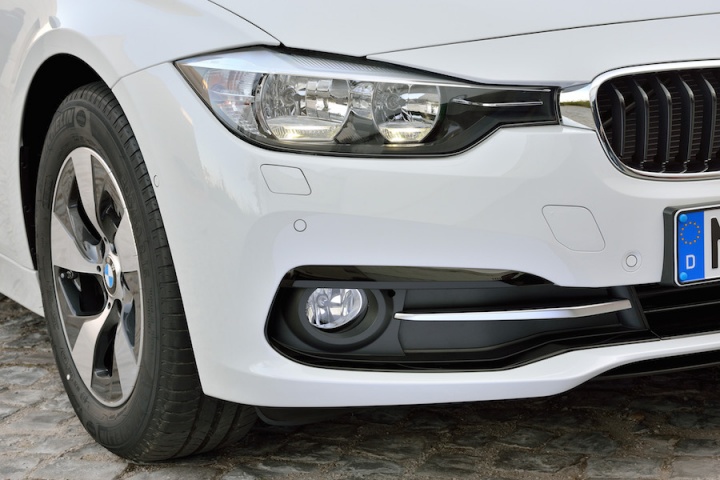 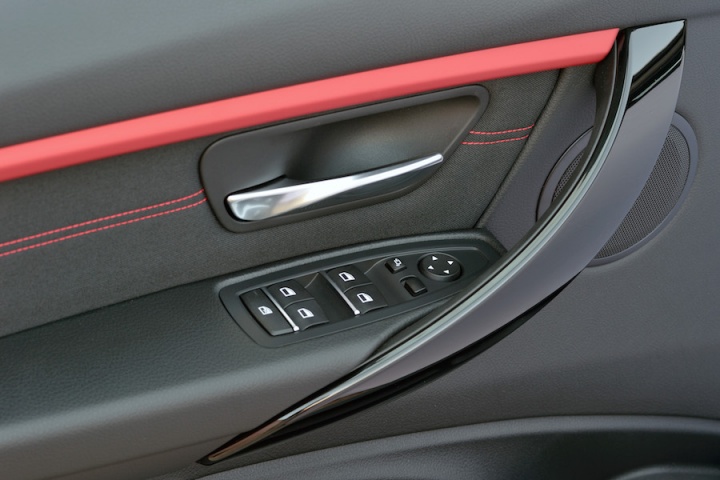 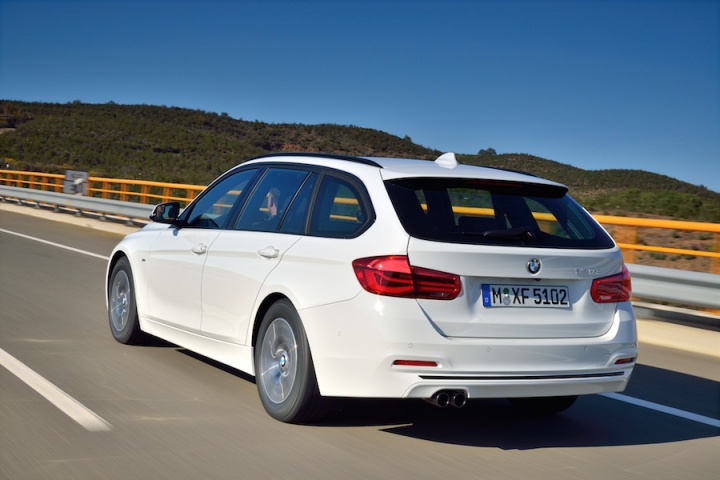 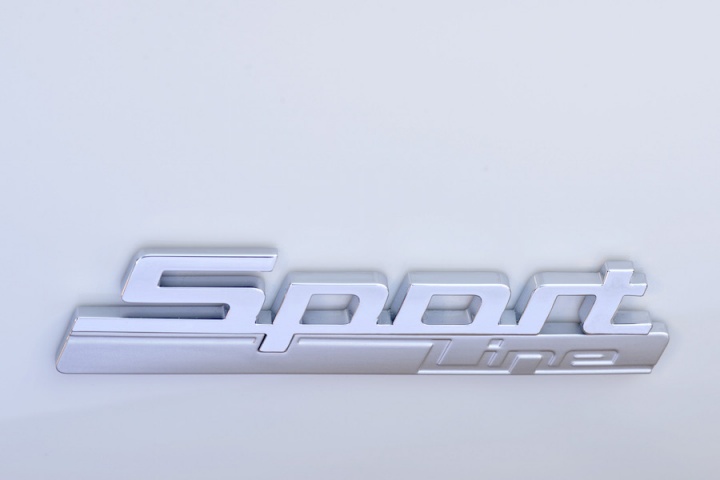 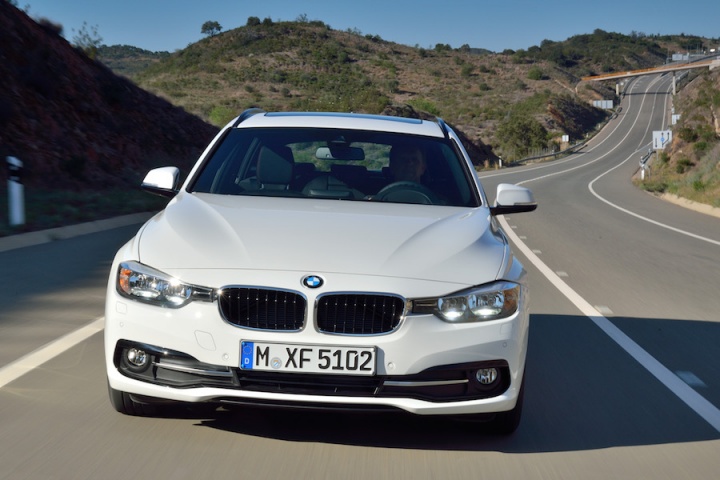 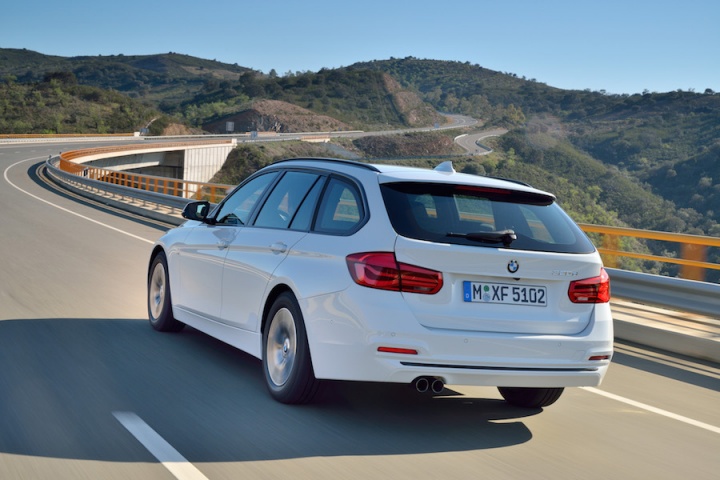 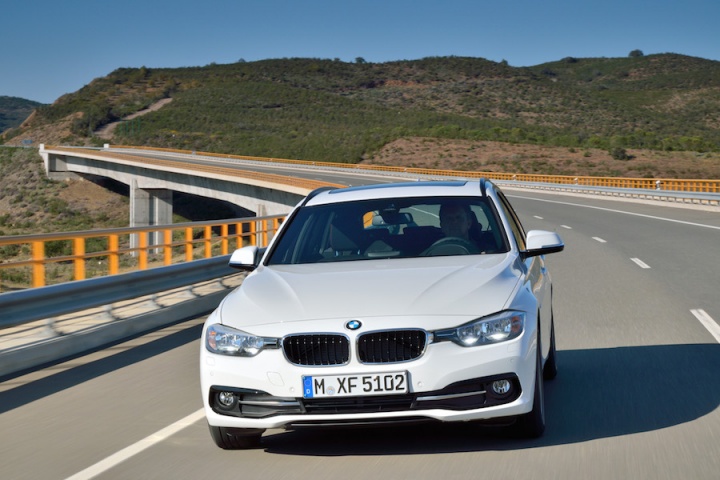 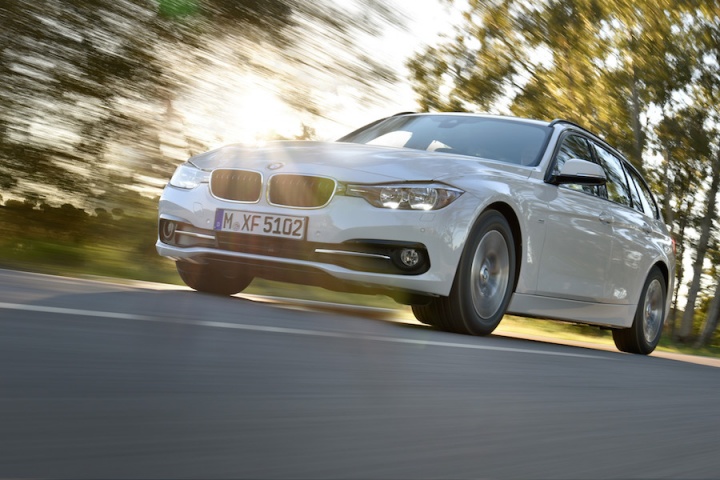 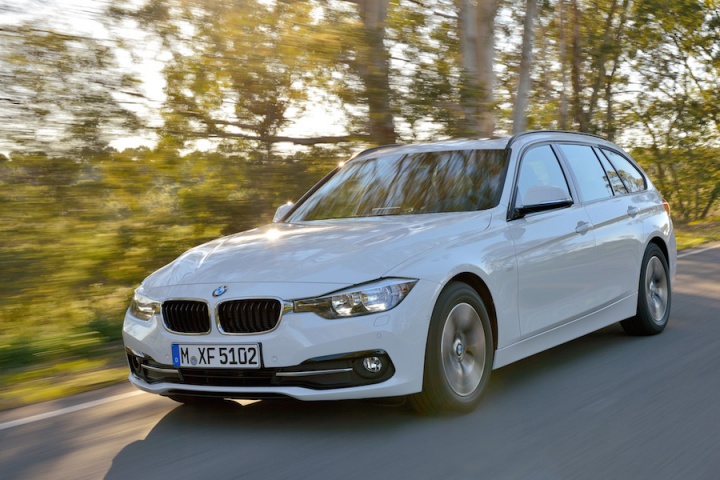 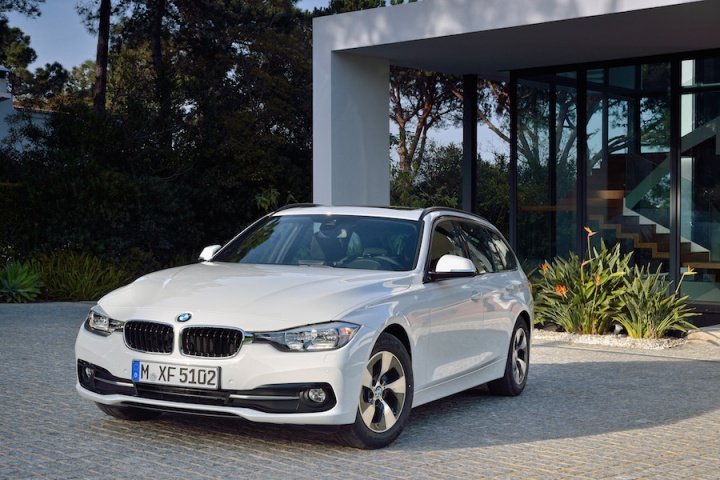 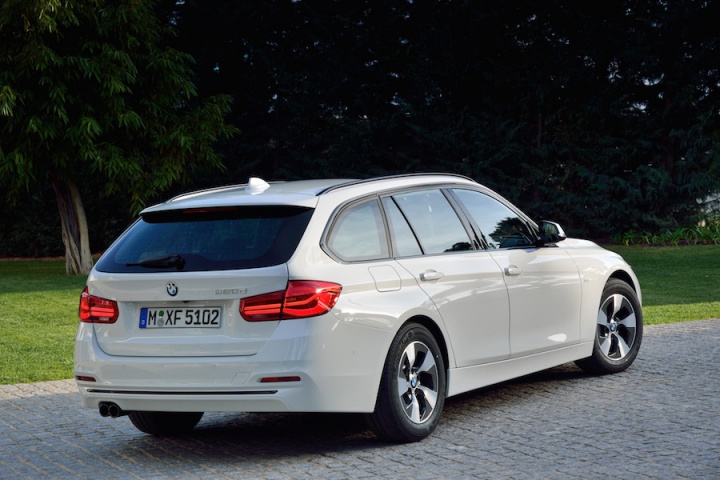 BMW goes for the green vote with a super-frugal 320d, here in estate format.

Sporting a facelift of such minimal impact that it's next to impossible to spot and a detuned version of the 2.0-litre four-cylinder turbodiesel engine, the BMW 320d EfficientDynamics Plus model aims to be cheaper to run than other 3 Series models. Just go easy on the options and don't expect any sort of excitement to the way it drives, and you'll be fine. Here we review it in Touring estate guise.

While we drove it in Touring guise, the 320d EfficientDynamics Plus is also available as a saloon too. Either car comes on tiny 16-inch alloys with large sidewall tyres, designed to offer the least rolling resistance for the best economy and emissions. Other than that, the EfficientDynamics Plus variants look like any other facelifted 320d... by which we mean handsome, but hardly any different to the pre-2015MY cars. Subtle changes to the front lights, lower air intakes and rear lights/bumper are exactly that: subtle, to the point of being indistinguishable. The same goes for the interior, which has some slightly different finishes and colours that even sketchily-briefed Munich executives would struggle to spot. This lack of a radical overhaul for the Three is not a bad thing, though, as the car still looks mighty fine outside and in - and the seats feel more comfortable than before, too.

The BMW 2.0-litre diesel engine has been treated to a lot of remedial work recently to improve both its refinement and its consumption, and the results are good. For the EfficientDynamics Plus model, there are revised gear ratios (the eight-speed automatic versions are cleaner and more frugal than the six-speed manuals), a lower ride height and partially masked kidney grilles to make each drop of diesel last just a little bit longer than in a regular 320d. And the biggest change is in output - while peak torque remains identical at 400Nm, the EfficientDynamics Plus develops 163hp instead of the 320d's usual 190hp figure.

On the road, though, there is very little to distinguish the two. Neither is a particularly quick car, despite that healthy 400Nm, and the EfficientDynamics model's lack of horses is simply not apparent. What the rear-drive only EfficientDynamics has is an even smoother ride than a 320d, which makes it an effortless cruiser. Gone are the days where BMW's sporting aspirations meant every car it produced had a ride on the uncomfortable side of firm. The pliant suspension couples to excellent suppression of tyre and wind noise, an engine that is next to inaudible at low revs and another eight-speed gearbox that is the epitome of seamless. Driven in a day-to-day manner as befitting the target audience, there's little to fault with the revised 3 Series.

Sadly, such cosseting has come at the expense of dynamic acuity. Time was when even a 316i would feel sharp to drive in a way that elevated the marque above the masses, but we've found that recently, all the four-cylinder BMWs are starting to feel no more rewarding to steer than a comparable Mercedes-Benz or Audi. And the new Jaguar XE certainly shows the 320d the way. Our BMW test car was fitted with optional variable assistance steering and it's a strange set-up to choose, as it brings inconsistency to the inputs that mean you're not comfortable leaning on the car's reserves of grip. When you do approach the limits, the rear-driven chassis simply washes into safe understeer, with no evidence that either lifting or pushing the throttle will alter its stance. And there's a marked amount of lean in the EfficientDynamics model, all of which means the car is much happier being driven well within itself, rather than on the ragged edge.

It's not bad value as a basic car but the EfficientDynamics Plus Touring we drove in Spain had been optioned up to a crazy degree, the net result being it cost practically the same money as a full-blown 335d xDrive M Sport Touring. OK, so you can still add options to the twin-turbo 3 Series diesel, but that comes with more equipment as standard - and more driving excitement, too.

At least EfficientDynamics Plus models, if the spec here in Ireland mirrors other markets, come with leather trim, satnav and heated front seats, over and above a regular 320d. Not that anyone will bother with the Touring estate either...

Audi A4 2.0 TDI Avant ultra: another low-CO2 version of a regular 2.0 diesel executive, but you'll need to wait for the new version based on the latest A4, which is released in a few months' time.

Jaguar XE 2.0d 163: Jag with the 'lesser' Ingenium diesel engine matches the BMW for power, if not torque, but feels a little bit more invigorating to drive. Conversely to the 320d EfficientDynamics Plus saloon, the XE 163 needs to be a manual rather than an automatic to dip below 100g/km CO2. And no Jaguar estate option.

Mercedes-Benz C 220 d Estate: any Mercedes with the 2.1-litre diesel is hard to recommend at the moment, as it feels outmoded by rival 2.0-litre units. Shame, as the C-Class is a lovely car otherwise.

Great on the wallet it may be, but if you're a keen driver who always picked a BMW for a bit of dynamic pizzazz - no matter its engine size or power - the 320d EfficientDynamics Plus doesn't really offer anything that a rival can't do to the same degree. It's a comfortable and handsome car, yet we can't really get excited about this overhauled 3 Series with a four-pot diesel engine. Nevertheless, the fiscal rewards it offers means it's bound to sell in droves.