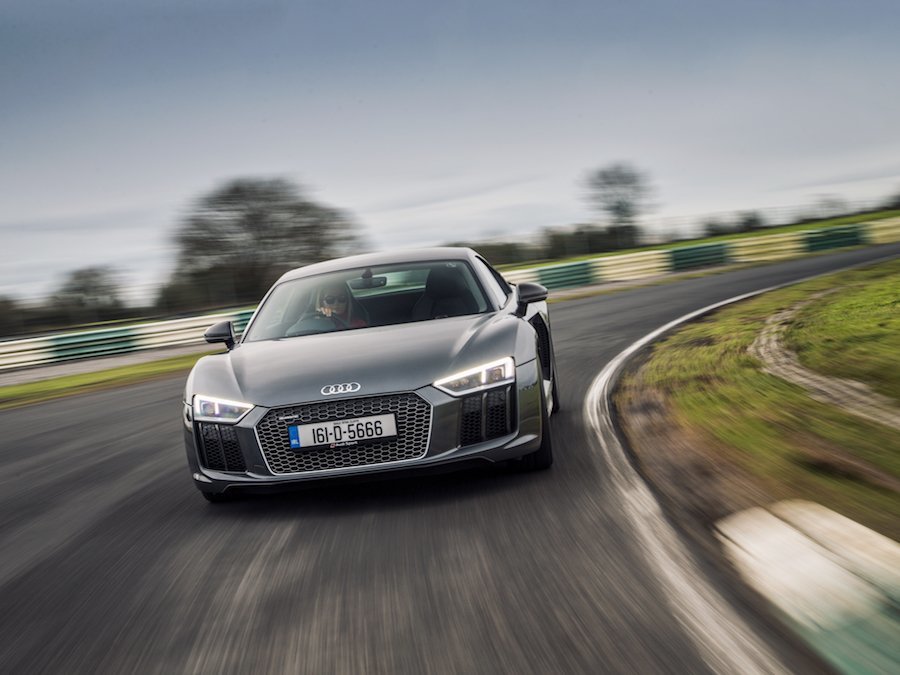 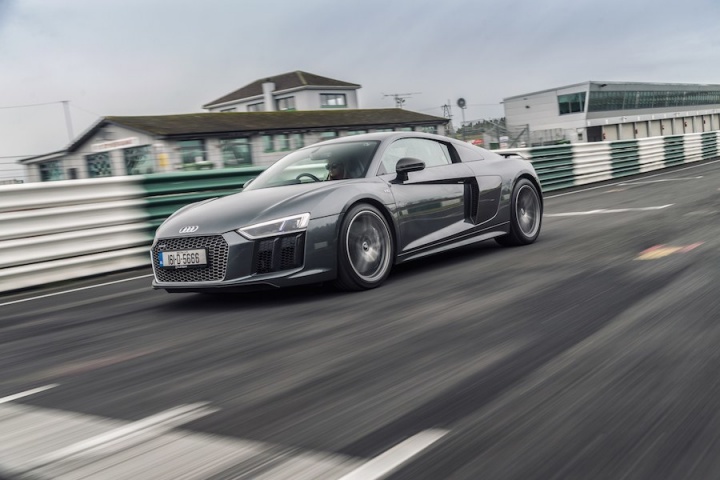 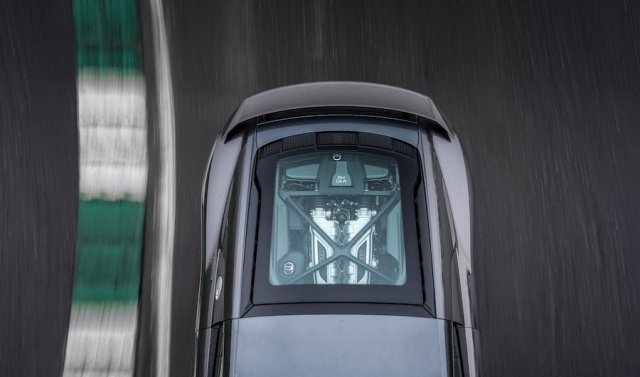 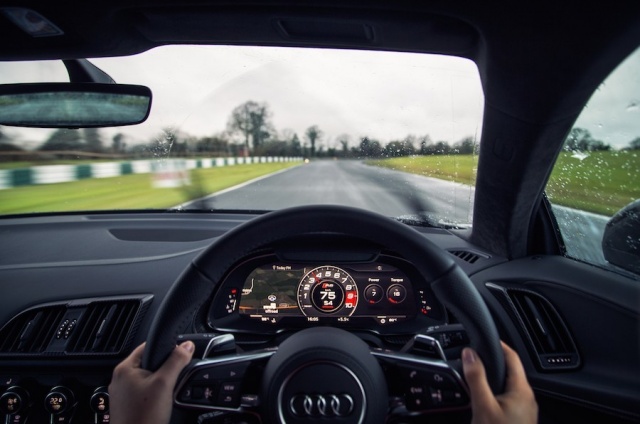 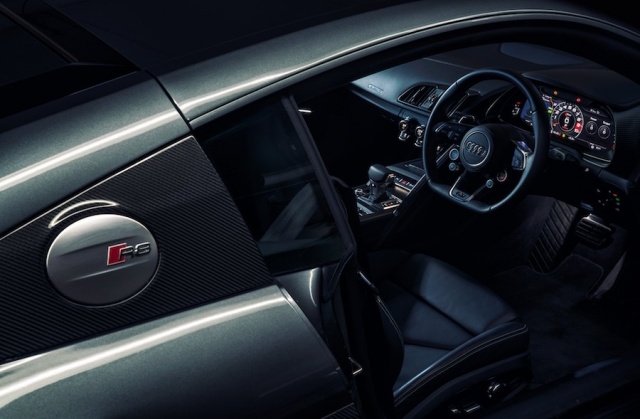 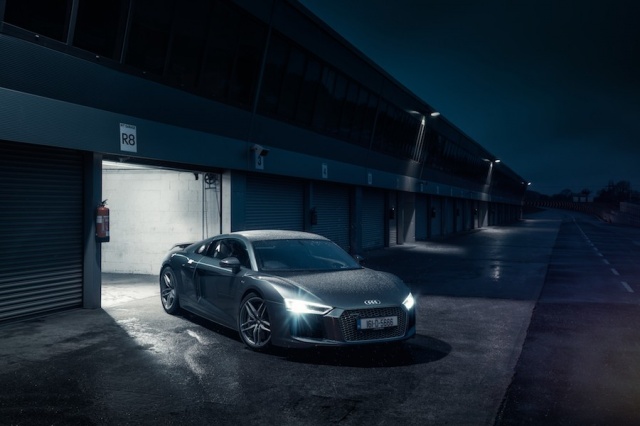 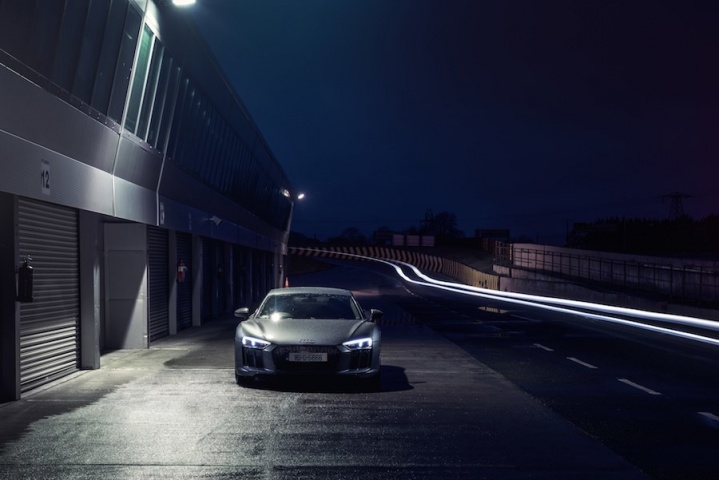 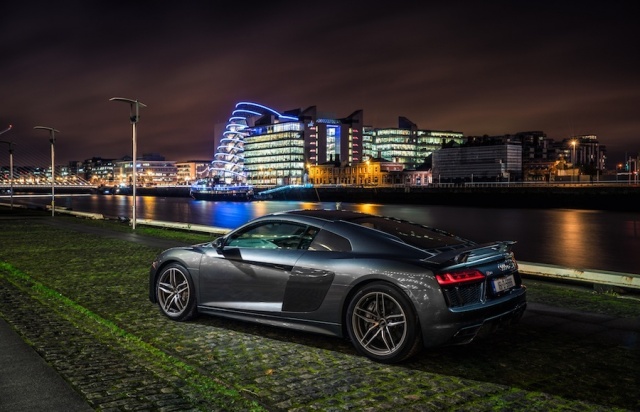 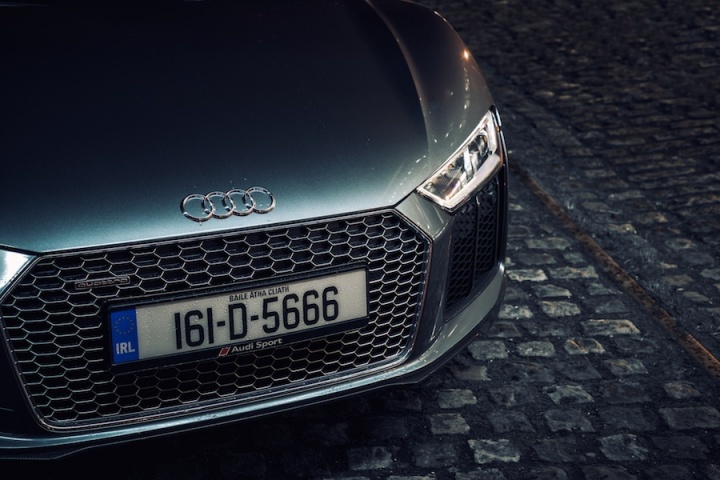 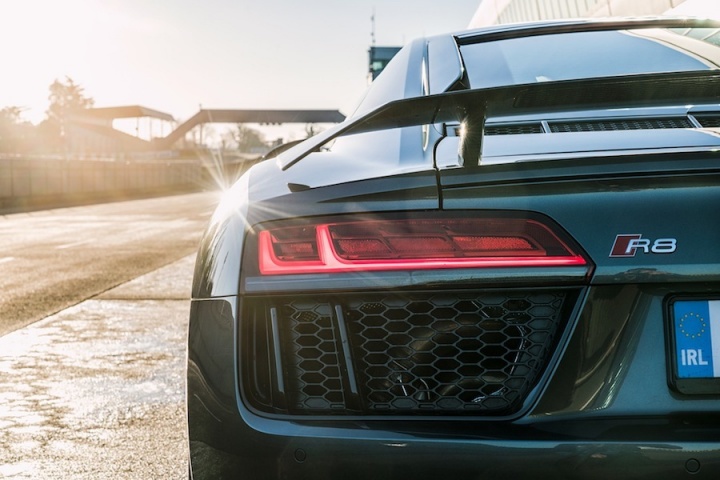 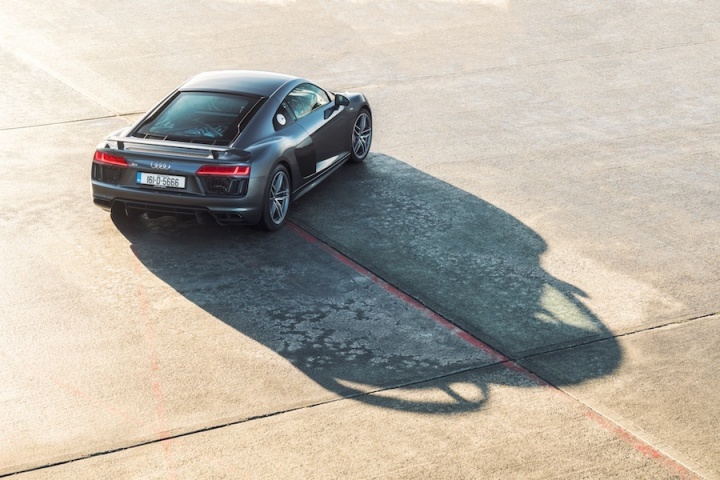 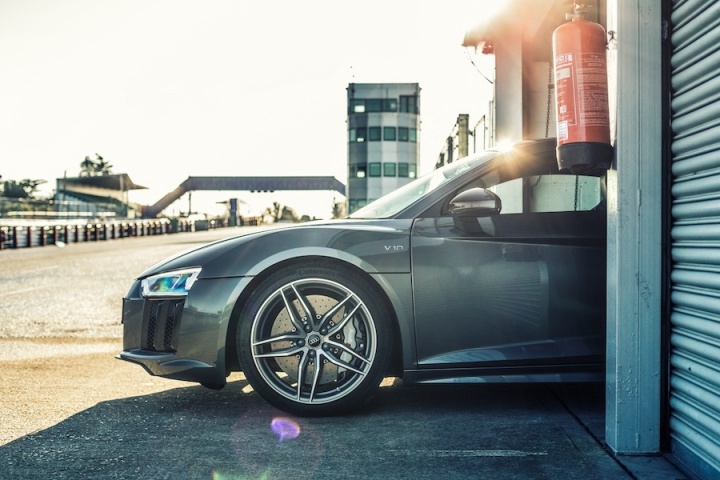 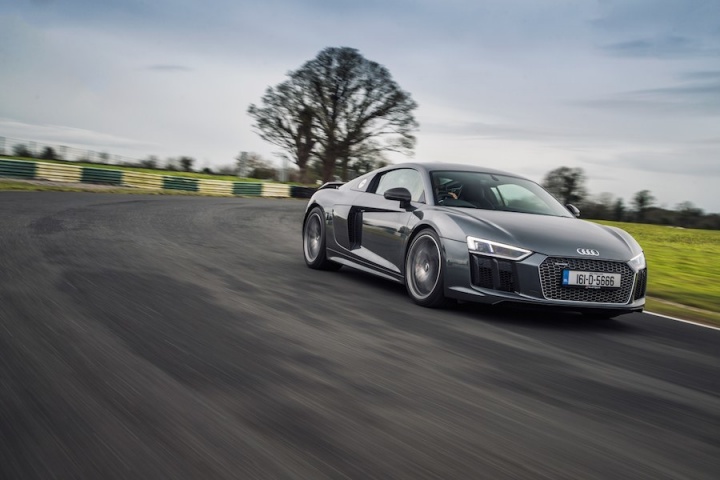 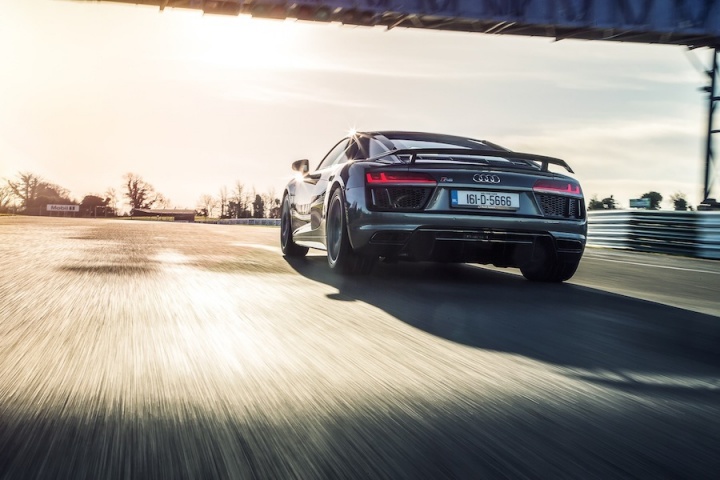 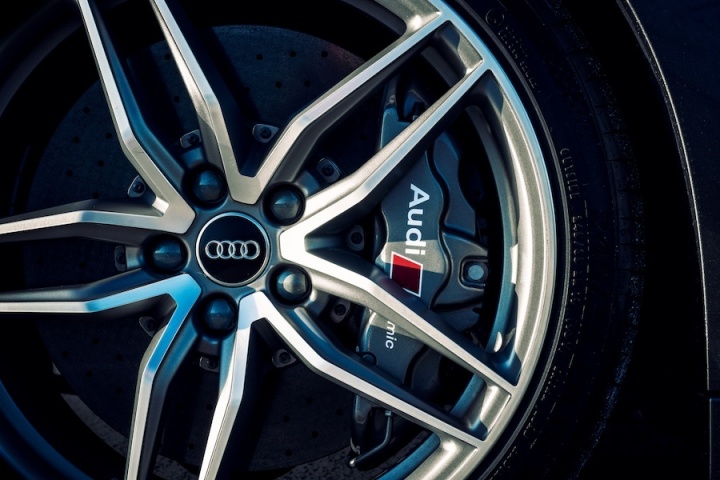 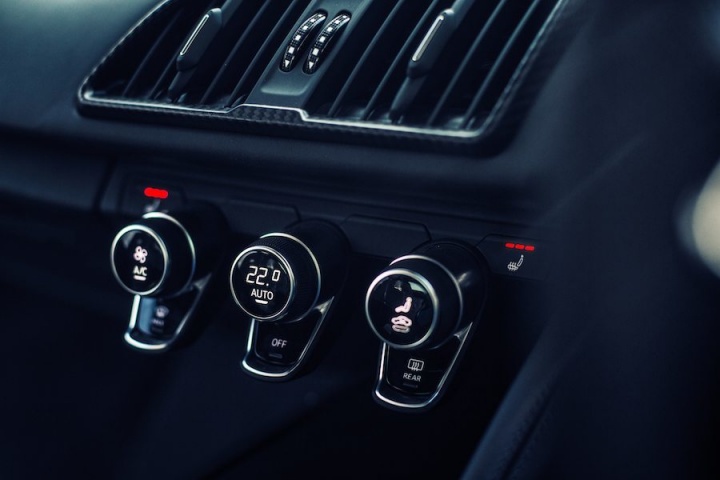 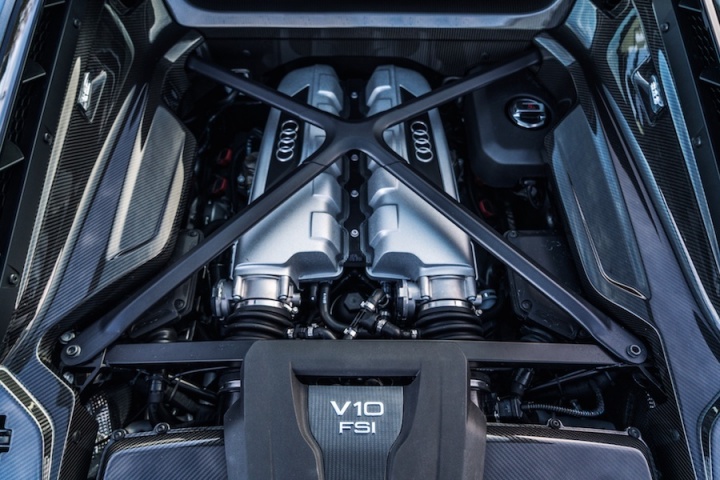 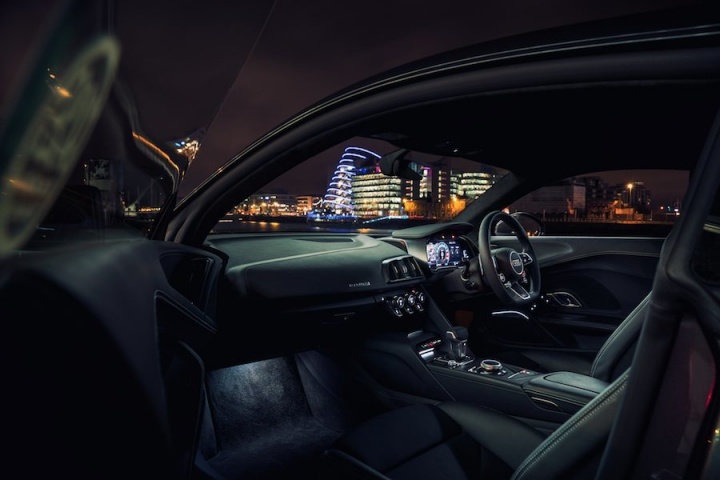 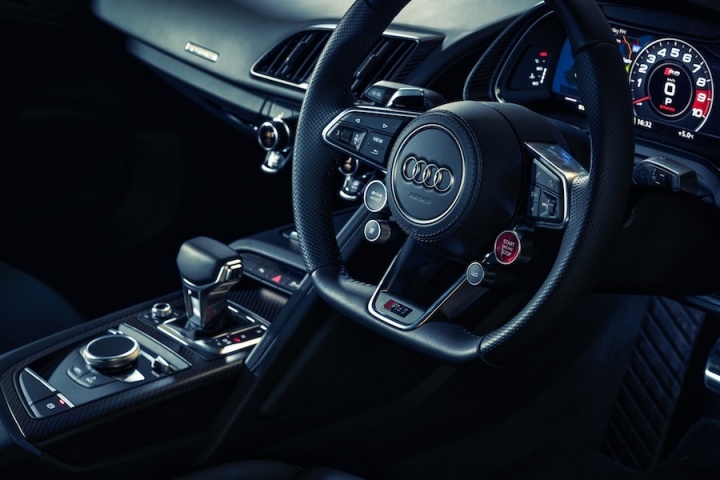 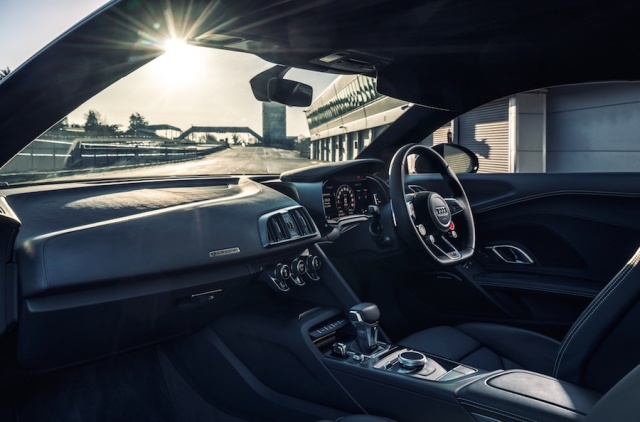 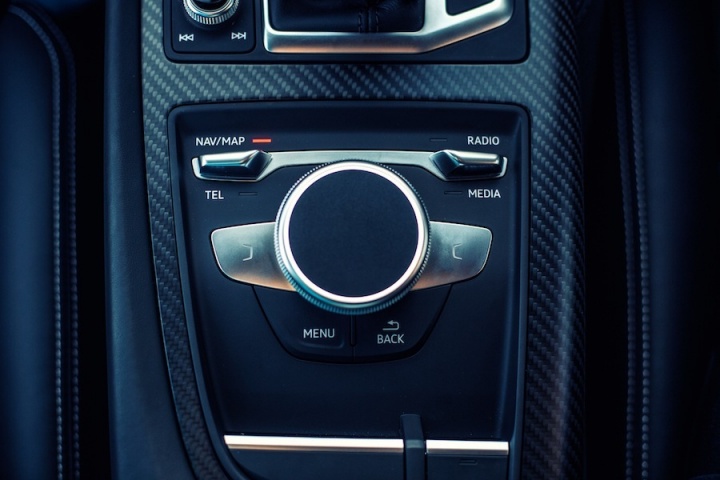 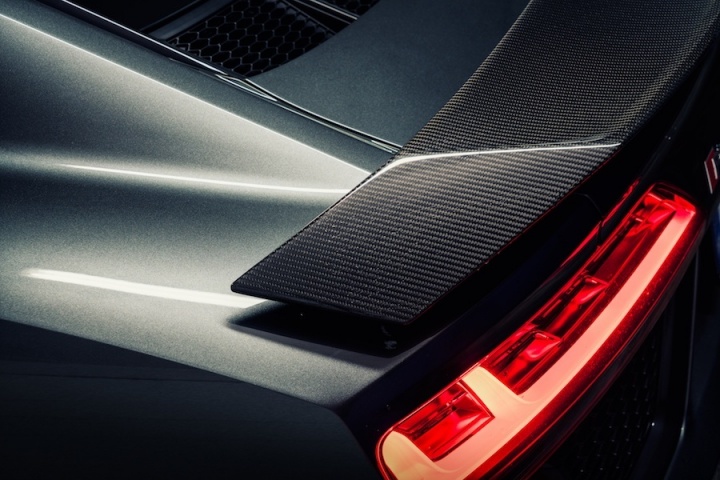 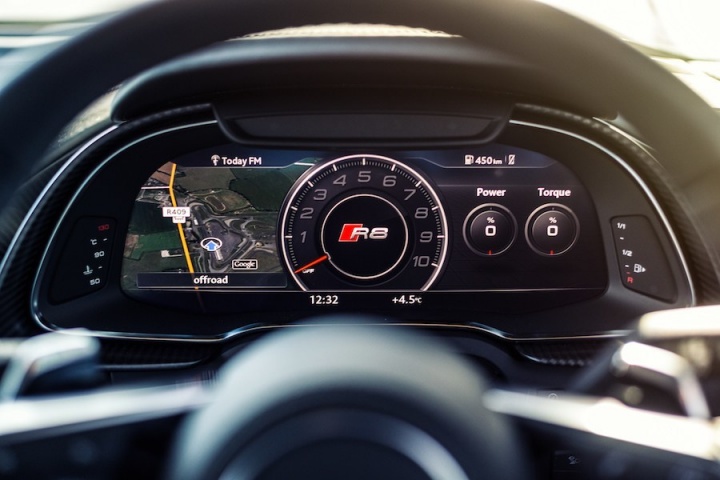 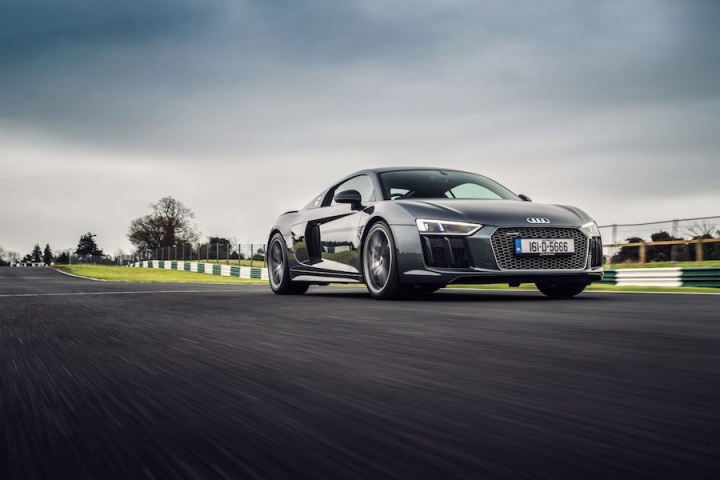 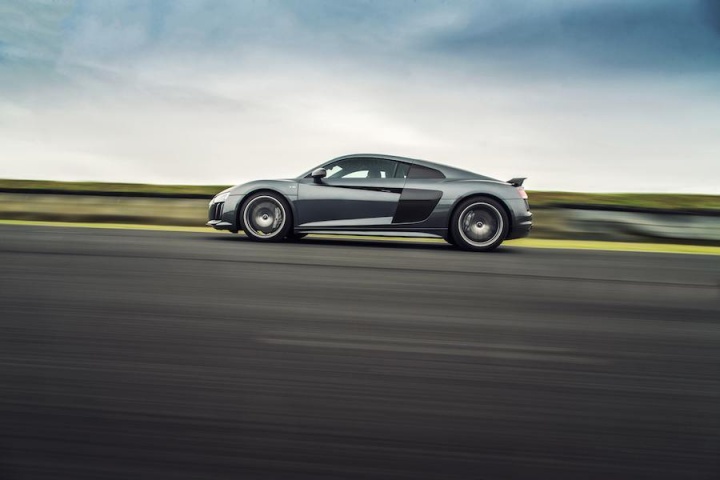 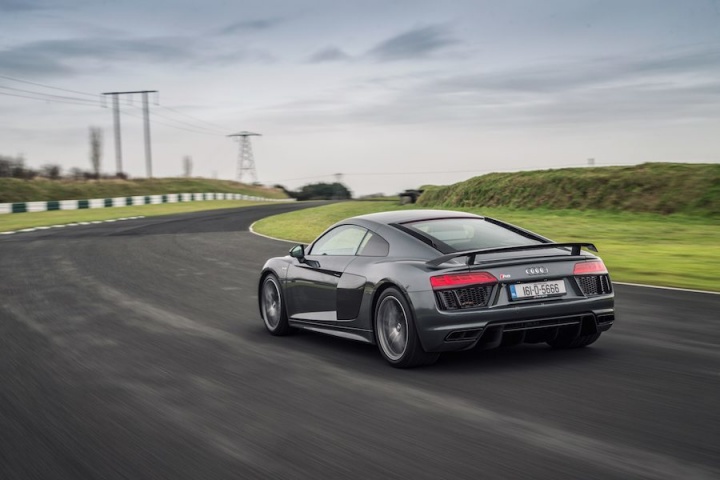 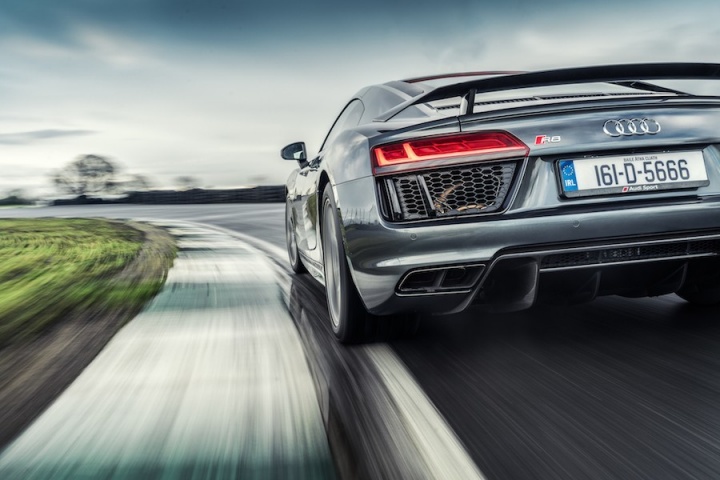 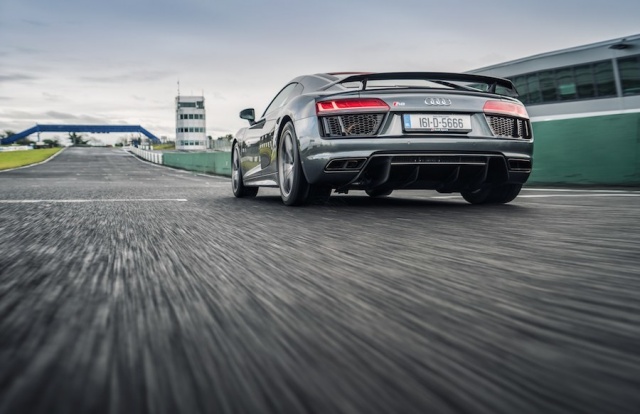 The R8 V10 plus is the most powerful production Audi to date, yet it's a pussy cat to drive.

Not so good: doesn't feel as special inside as it could, overpriced

A cursory glance at any part of the spec sheet on the Audi R8 will confirm that it is a one hundred per cent bona fide supercar. Its two-seat, mid-engine layout is built on almost the same aluminium and carbon fibre chassis that is used by the Lamborghini Huracán. In fact, this more focused R8 V10 plus model is dripping in carbon fibre. The 'sideblade', an iconic styling feature carried forward from the original R8, although now bisected, is finished in gloss carbon. Similar treatment is given to the fixed rear wing, a clear indicator of this car's potency.

The silhouette of the new R8 V10 plus is very reminiscent of the previous generation's, but give it more than a passing glance and you'll see that every line and panel is new. It's a sharper and tauter looking car. It might only be riding on 19-inch wheels here, but they are made of lightweight forged aluminium and leave enough meat on the sidewalls to retain a degree of ride comfort. In a supercar world where 20- and 21-inch wheels are fast becoming de rigueur seeing more than a sliver of rubber in the sidewalls is a refreshing sight. Look in behind the bisected spokes and you'll catch a glimpse of the enormous carbon ceramic brake discs than can haul up the R8 V10 plus in impressively short distances. And unlike carbon ceramic brakes from a few years ago, these perform just as well in low-speed everyday driving while giving a fair degree of feel through the brake pedal.

Given that this is the more hardcore R8 to date it remains a highly useable car. In contrast to the like of Ferrari's 458 Speciale and Porsche's 911 GT3 RS the Audi is an incredibly docile machine if you want it to be. In fact, driving it around town it is almost too normal. This is a supercar after all, and the most extreme version of it (to date), yet apart from the guttural tone of the naturally-aspirated V10's exhaust it is somewhat underwhelming to drive once the initial novelty of such a car has subsided.

Some of this stems from the interior. Climb inside and you find yourself in an unmistakably Audi environ. The Virtual Cockpit, as impressive as it looks, is, with the exception of an R8 logo on start-up, the exact same as you'll find in the new Audi A4, TT or Q7. The rotary controller for the menu system is just like that you'll find in other models too. The same even goes for the door mirror adjustment. The gear selector thankfully does look and feel unique, as does the multifunction steering wheel, which is a further evolution of the semi-hollow design first seen in the latest generation TT. The sports seats hug, but don't dig in and overall you feel very much a part of the car.

But sitting inside and trying to justify the €296,859 price tag is an almost impossible task that is made even harder when you look through the options list. Bear in mind, this is Audi's flagship supercar. If you want a reversing camera, that will cost you an additional €1,112. Electrically adjustable seats, a further €2,603. The Sport Exhaust System (which I'll admit does sound epic) adds €3,409, even on this V10 plus model. The gloss carbon fibre engine surround looks superb, but so it ought to for €6,100. This is where it really feels like Audi is taking the proverbial.

There is one big star in this show though and that is the engine. In a world that is increasingly moving towards turbocharging, to have a 5.2-litre naturally-aspirated V10 just inches from your back is an experience to savour. When the rare occasion presents itself with the chance to fully depress the throttle pedal the power delivery is nothing short of phenomenal. The digital speedometer can't display the increasing digits quick enough. Its guttural sound rapidly evolves into a simply glorious wail as all ten cylinders fire and produce power in a way a turbocharged engine can't. The performance is brutal. And even with the security of Audi's quattro four-wheel drive system you daren't lower your concentration for a nanosecond. As useable and docile as the R8 is at slow speeds this is hugely fast when you want it to be.

But what the quattro system giveth with one hand, it taketh away with the other. Excitement. If (ever) and when the sheer brute force of the power delivery becomes normal, the realisation hits home that this is a car that (despite being given a more rearward bias than most Audis) lacks the thrill of some mid-engined rear-wheel drive rivals. Naturally there are benefits to the quattro system, especially in the wet where it will shine and assure its driver where other cars may have you exercising your sphincter more frequently.

From its 338 litres of boot space and ability to potter around town, to the ceramic brakes glowing red as you shift down from seventh to second for that tight hairpin at the end of a straight at your favourite track, the R8 V10 plus is the very definition of an everyday supercar. It flatters drivers exploring their limits yet returns respectable fuel economy when you aren't pushing so hard. For a car that can hit 100km/h from rest in 3.2 seconds it is remarkably easy to live with. It could be argued that in reality, in Ireland, the smaller and significantly cheaper Audi TTS is for the most part as quick point-to-point. It may have just over half the power of the R8, but is only 1.4 seconds slower in the dash to 100km/h. Side by side however you would always want the R8.

Ferrari 488 GTB: if you want a mid-engined Ferrari you'll have to take two turbochargers now.

Lamborghini Huracán LP580-2: slightly less powerful, but makes up for it with rear-wheel drive.