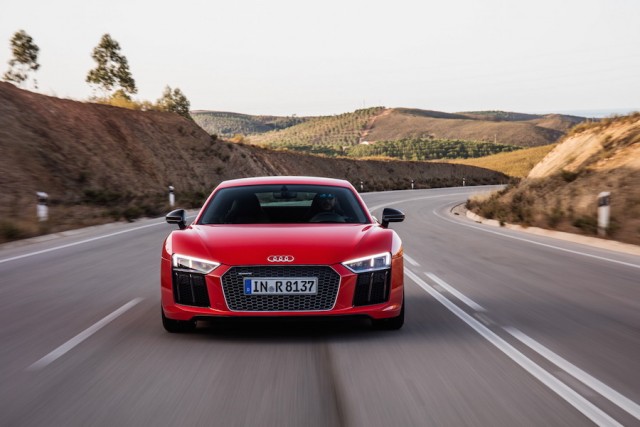 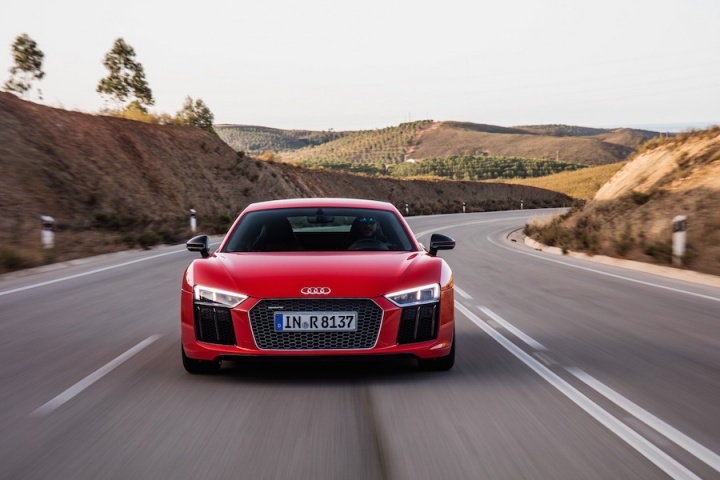 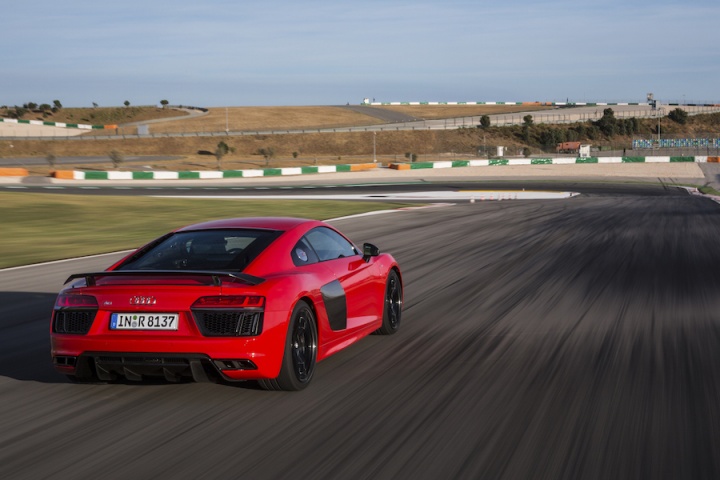 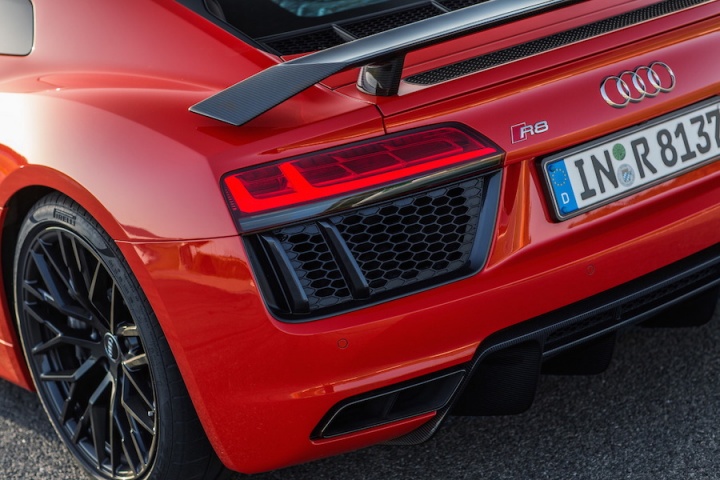 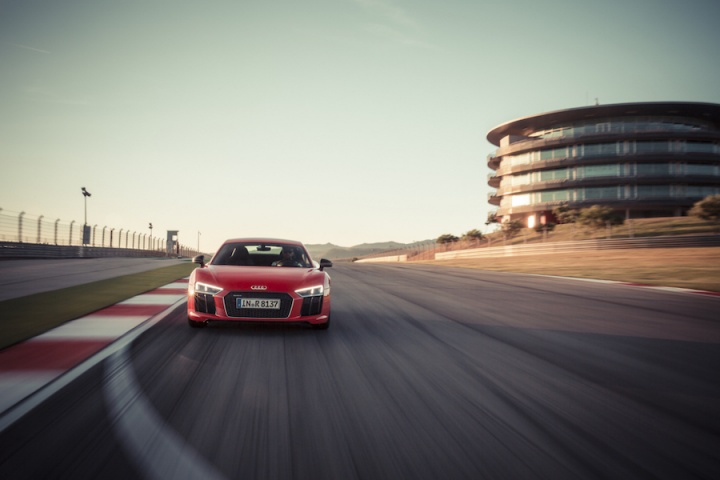 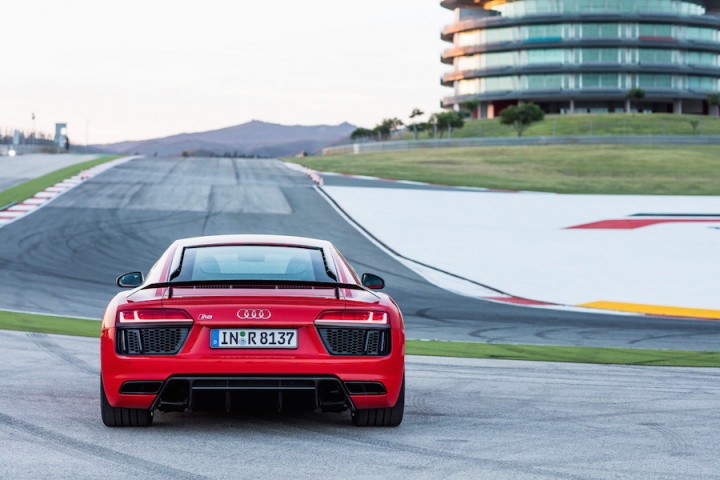 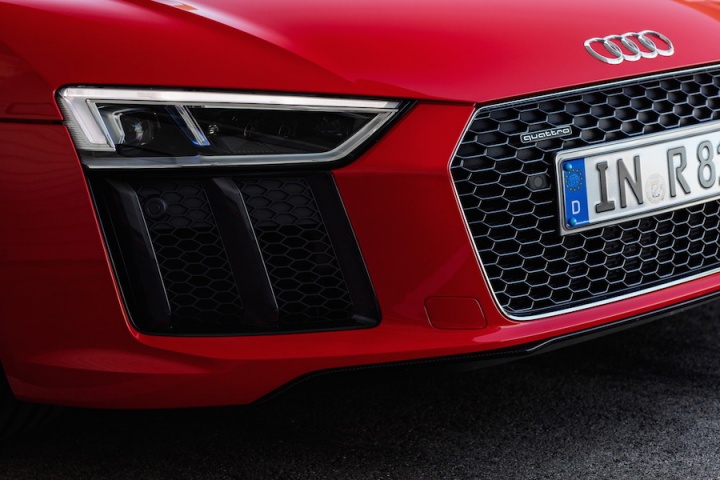 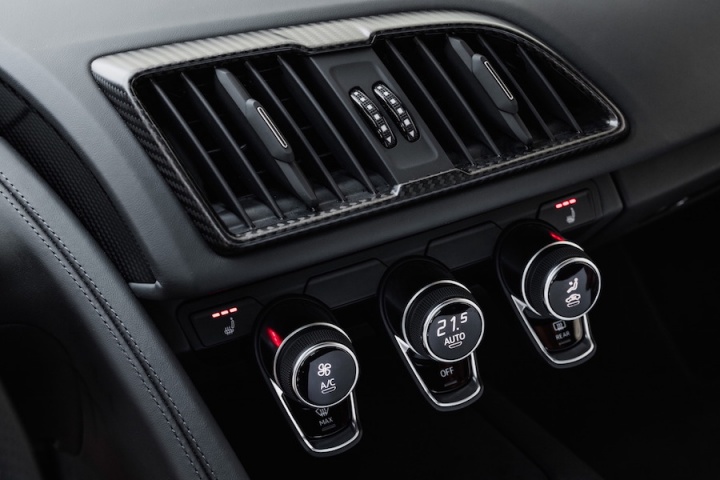 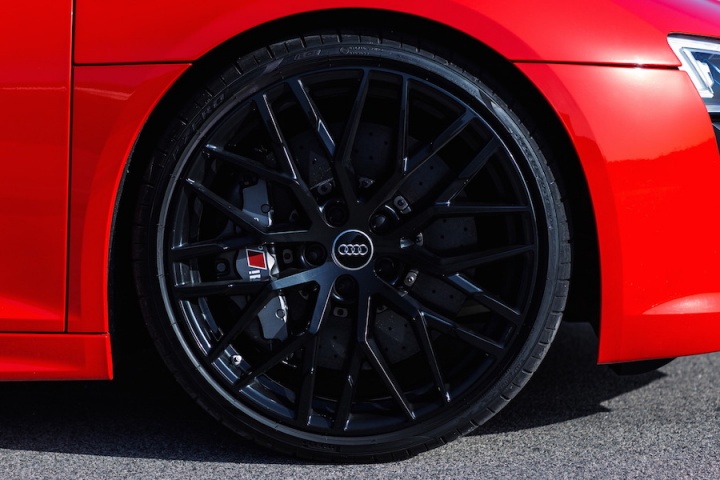 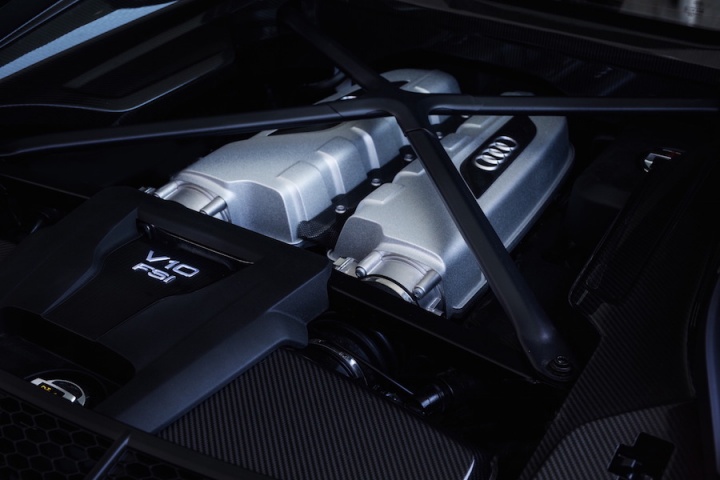 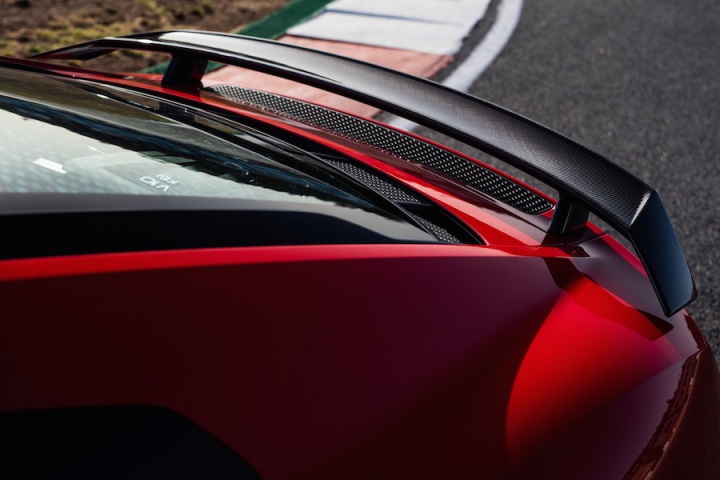 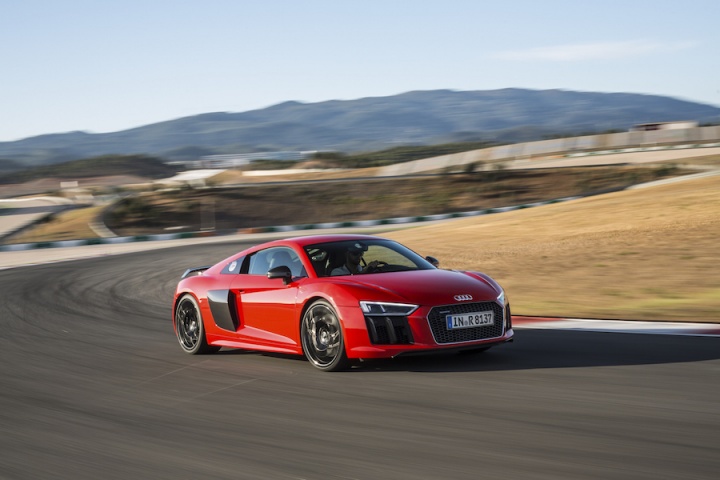 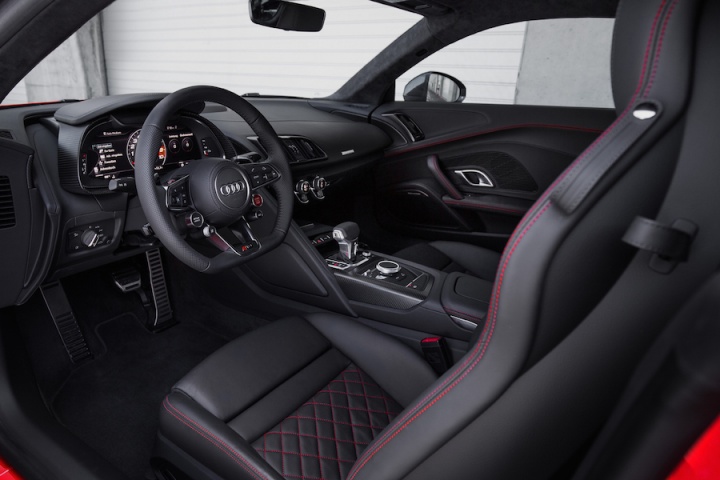 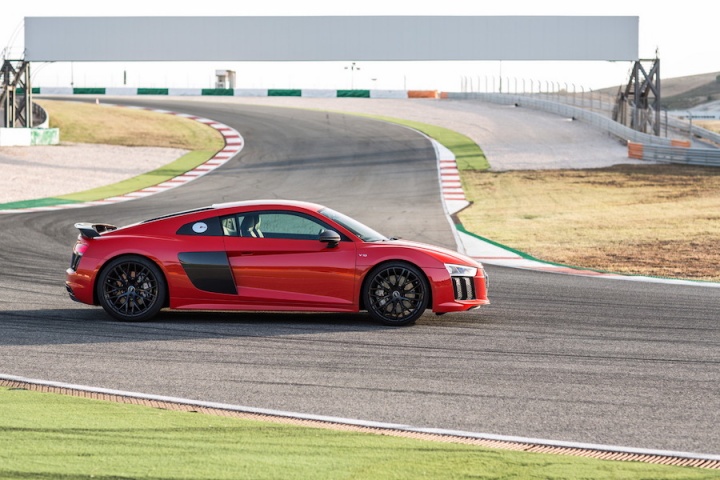 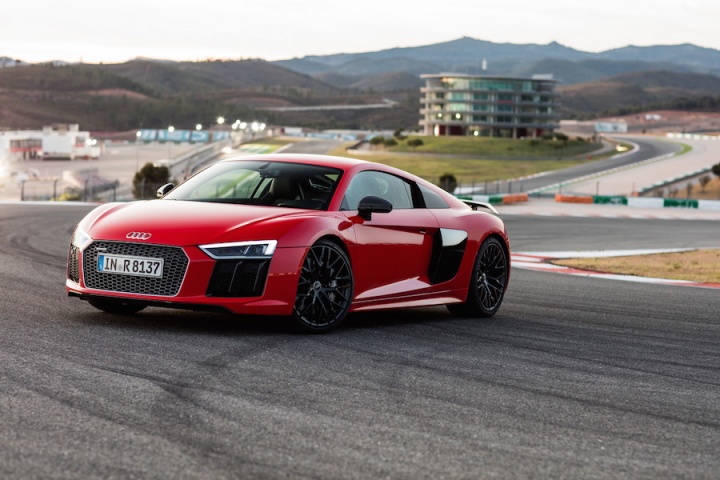 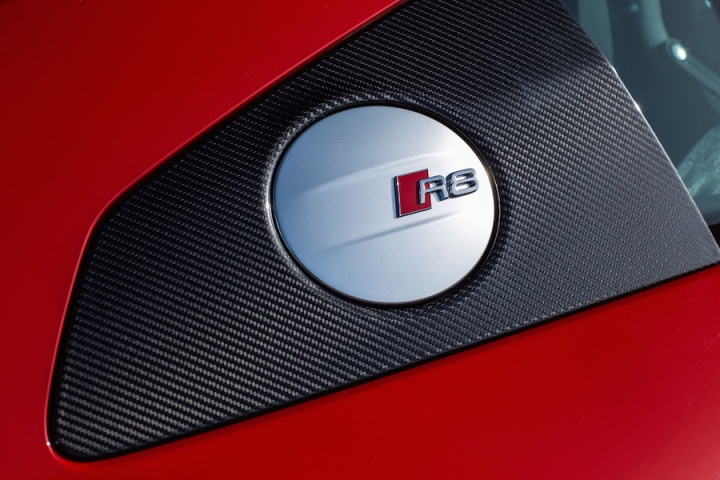 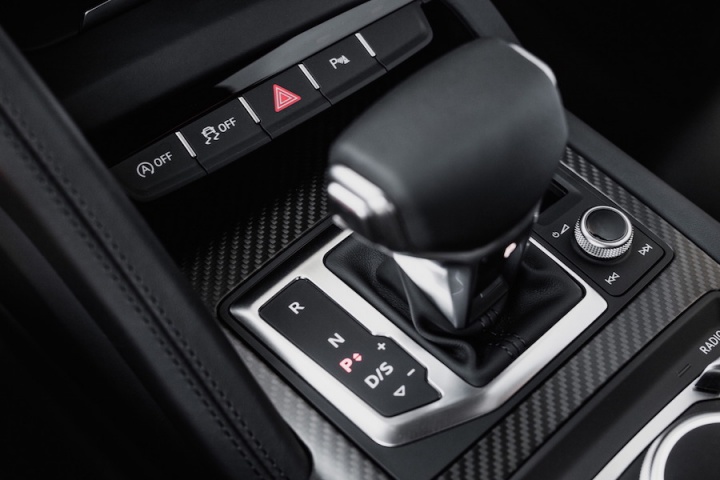 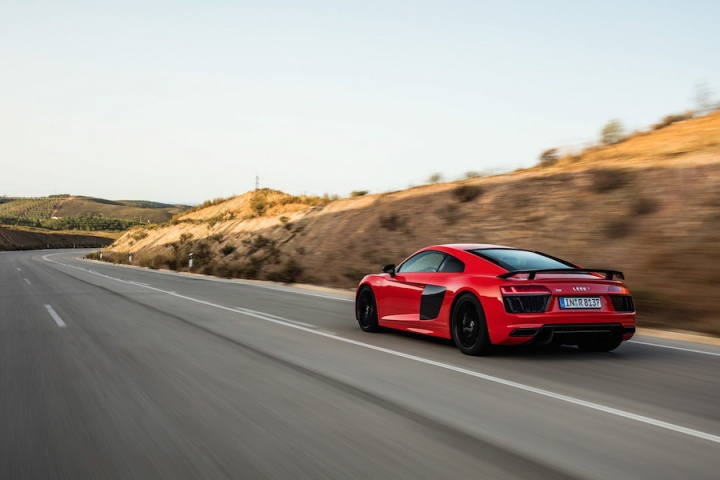 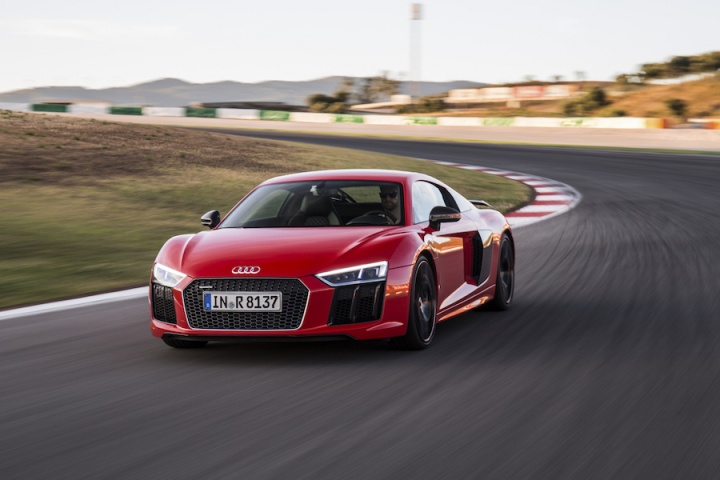 The standard second generation Audi R8 V10 is an epic car by any measure, but it seems there are buyers out there that want a little bit more. For them, there's the new R8 V10 plus, which has more power than the regular car, yet is lighter and features more focused suspension settings - along with a few choice additions to the specification. If you're in the enviable position of choosing such a car, then do yourself a favour and go for the plus. It lives up to the name.

As we've already reviewed the regular Audi R8 V10, there's not much more to say here. It looks spectacular, despite an evolutionary approach to moving on from the first generation, and has huge road presence. That's thanks in part to the highly distinctive sweeping LED rear indicators. Though not 100 per cent confirmed, it's hoped that Audi Ireland will include the immense laser headlights as standard on this V10 plus model. We do know that the plus version is differentiated from its lesser relative by the use of Gloss Carbon for the two-part 'sideblade', door mirrors, front lip spoiler, rear diffuser and the rear spoiler - which is a fixed item in place of the standard V10's automatically deploying design. The plus version of the R8 is 40kg lighter than the regular car all in as well.

Inside the R8 V10 plus there's more carbon fibre trim and special lightweight bucket seats as standard, while the flat-bottomed steering wheel gains buttons for the performance mode and sports exhaust as standard. Buyers choose between Alcantara and Nappa leather upholstery.

Audi did its best at the international launch of the R8 to disguise how much better than the normal car the V10 plus is. It fitted several expensive options to the former, such as the carbon brakes, performance steering wheel, sports exhaust, larger wheels, dynamic steering and magnetic ride damping, yet five minutes behind the wheel of the V10 plus was all it took to confirm that it's the one for those that truly love driving. Everything is a touch sharper, from the reactions of the chassis to the engine and as a whole it's simply sublime.

The springs and dampers are stiffer on the plus model than the regular car, but the same aluminium double wishbone suspension system is employed. Body control is rock solid, yet it's never uncomfortable. Firm, yes, but never harsh, even over longitudinal ridges and bad bumps. Indeed, though larger pockmarks can be felt, the R8 tracks straight and true, holding its line in an assured manner. It should be untouchable in the wet. The optional dynamic steering, a variable ratio system, won't be to all tastes, but we had no issues with it in a variety of scenarios.

Saying that, if you use the 'performance modes' switch (standard on the V10 plus), the steering ratio is fixed and I have to admit that we used that for most of the time. It's operated by a highly tactile rotary button on the steering wheel, giving access to dry, wet or snow modes. This alters the ESC stability control system, incorporating traction control and anti-lock braking. We only had the opportunity to explore it on dry roads and track and it allows plenty of movement before subtly reining in a driver's exuberance.

Of course, the ESC system can be switched off altogether, and there's no fear in doing so in the dry. With quattro four-wheel drive as standard there's always loads of traction, even if the R8 is set up to be rear-biased. It feels even more assured than the first generation model, which might mean it's a tad less playful at the limit, but believe me: it's a cracking driver's car.

We've already waxed lyrical about the V10 engine in our review of the regular R8 V10, but it's worth reiterating here. The plus model feels even quicker than the numbers suggest and it's never less than scintillating. The exhaust of the plus model also has a harder edge to it, which means it sounds even better.

At the time of writing, we don't have a confirmed price for the new Audi R8, though the V10 plus model will be somewhere between â‚¬250,000 and â‚¬290,000. We've given it an extra half star for value over the regular V10 based on the assumption that, for what appears to be a relatively modest premium (all things being relative), the plus version gains some choice extras, such as those laser lights, never mind the extra performance. This car makes the likes of the Lamborghini HuracÃ¡n (with which it shares a lot) look very very expensive.

Aston Martin V12 Vantage S: equally beguiling and one to treasure, but feels like a dinosaur next to the high-tech R8.

McLaren 570S: promising 'junior P1' looks the part and should be cracking to drive, though won't touch the R8 in wet weather.

We'll admit that the pricing and equipment picture isn't completely clear as yet for the new Audi R8, but if it pans out as it looks like it will then the plus model reviewed here will make a very strong financial case for itself based on a generous standard specification. That's before you consider the added performance and driver focus that brings the new R8 V10 from great to truly brilliant.