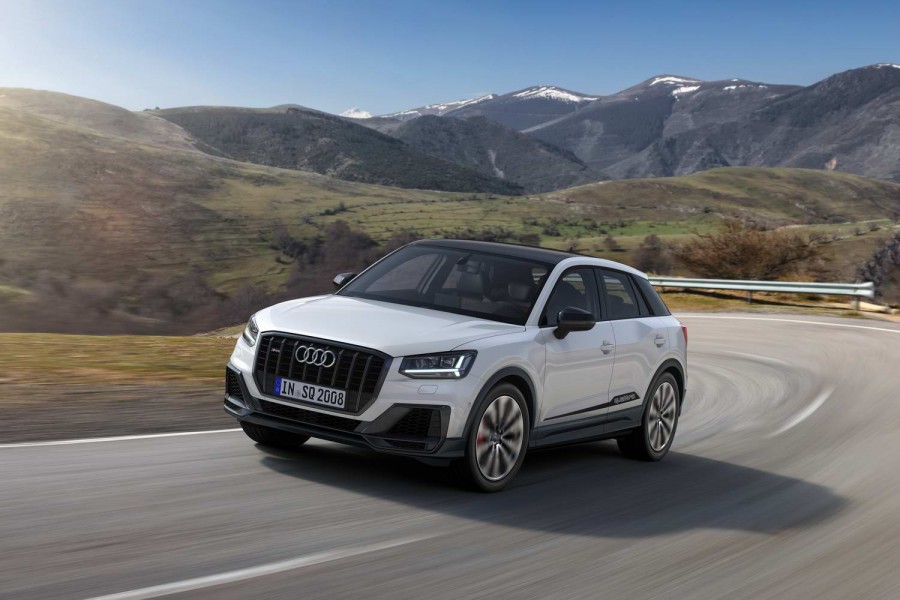 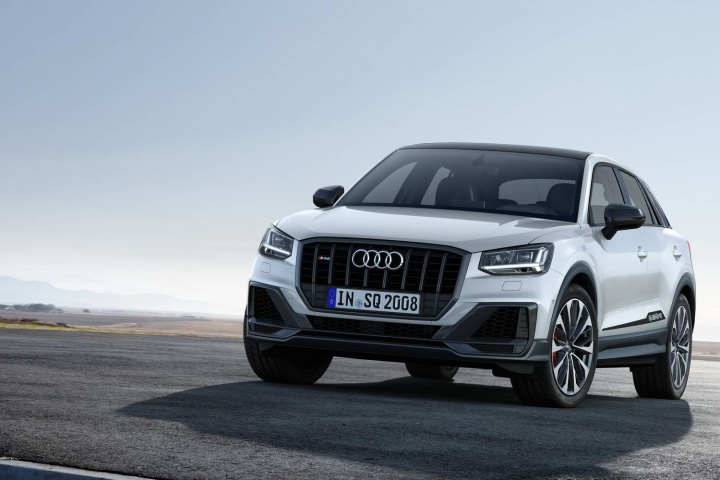 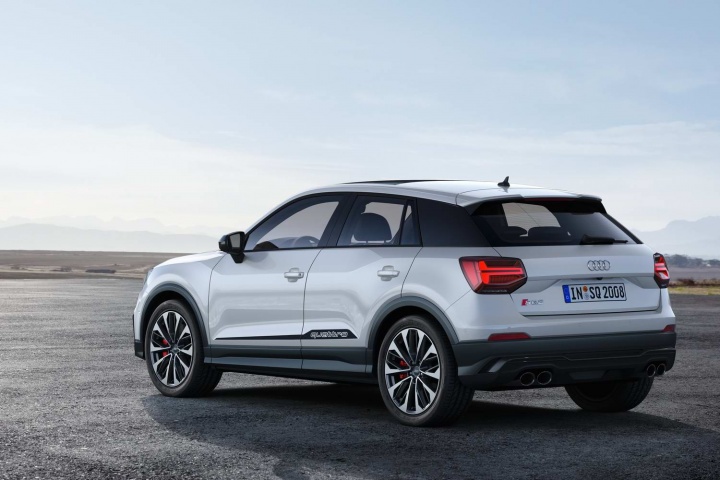 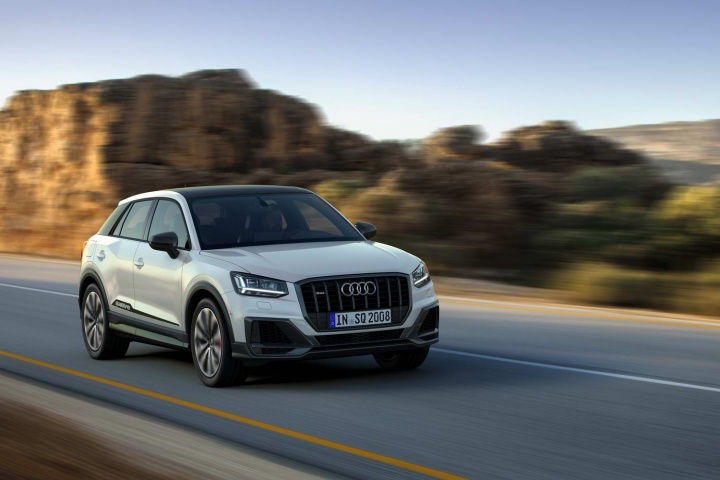 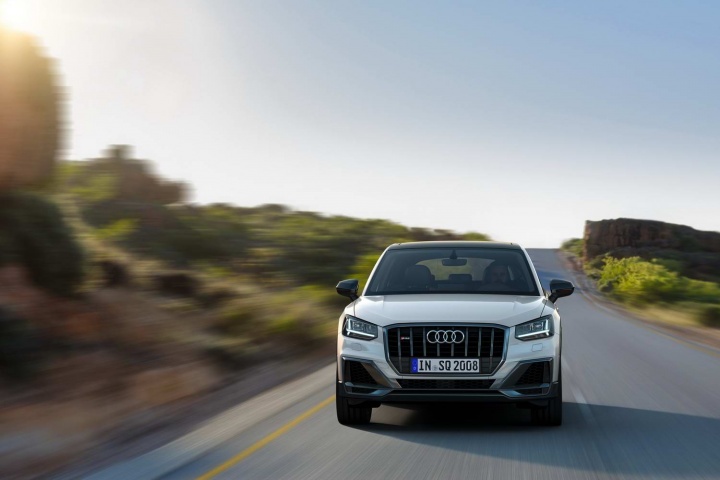 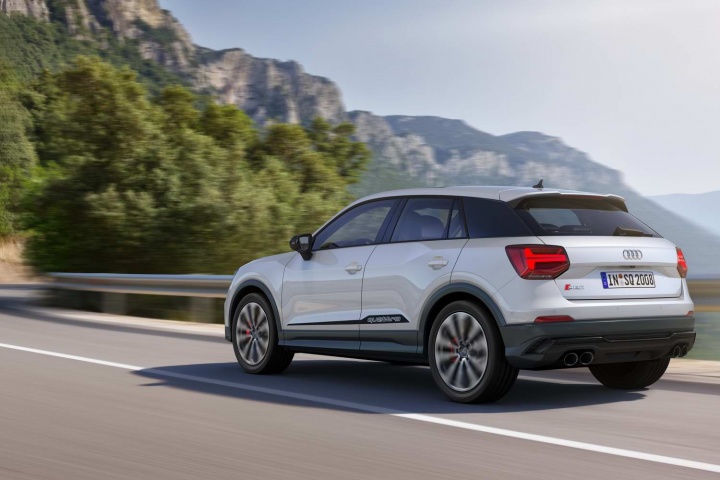 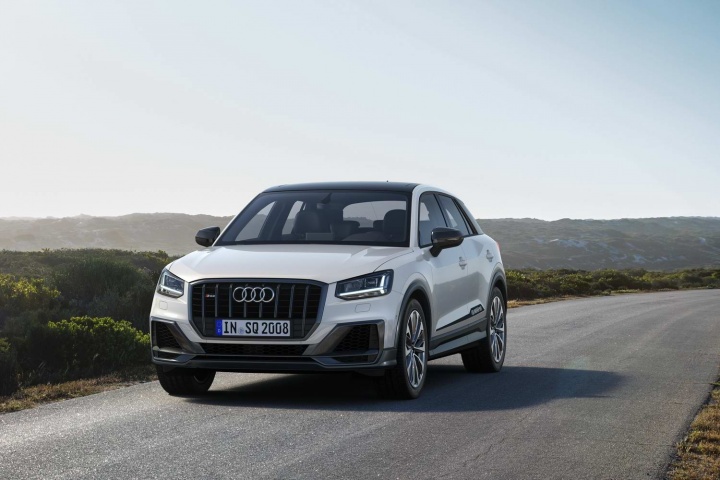 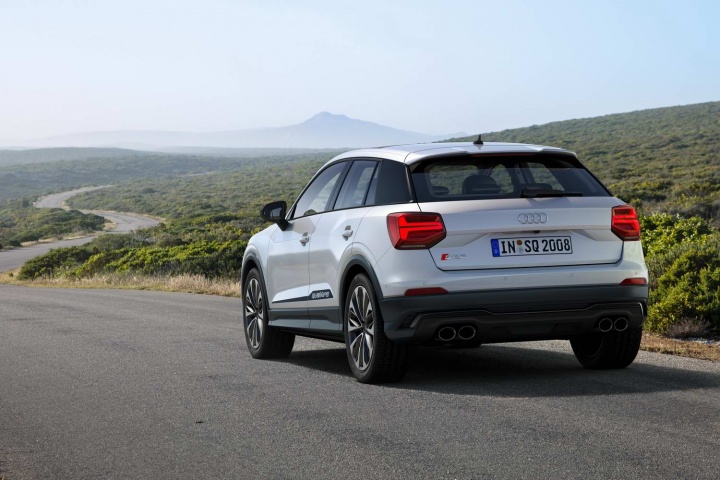 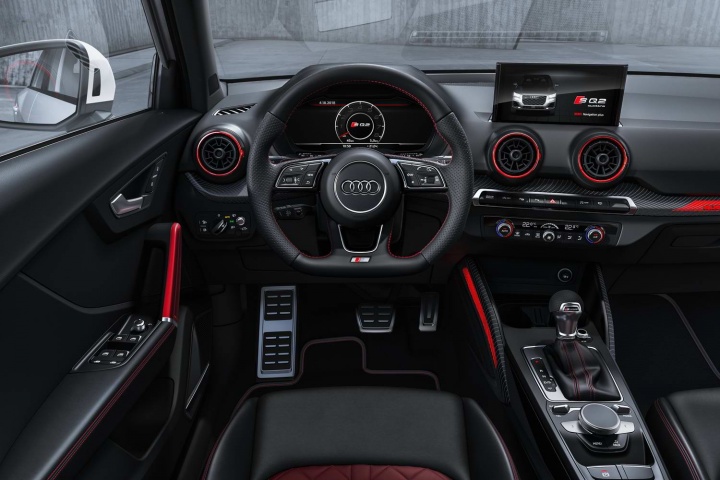 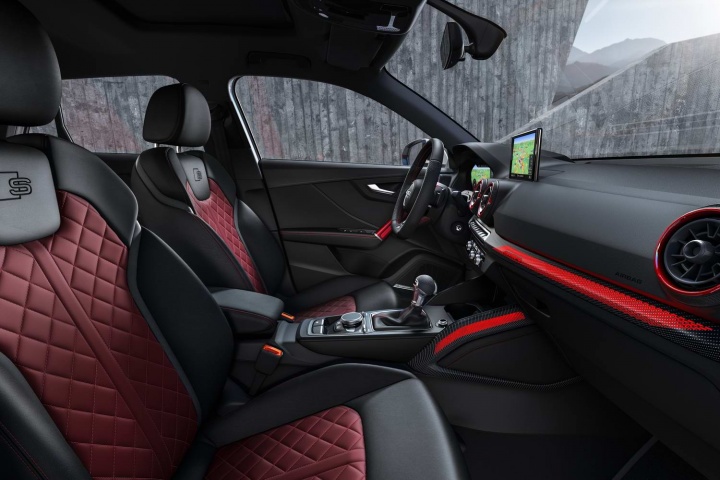 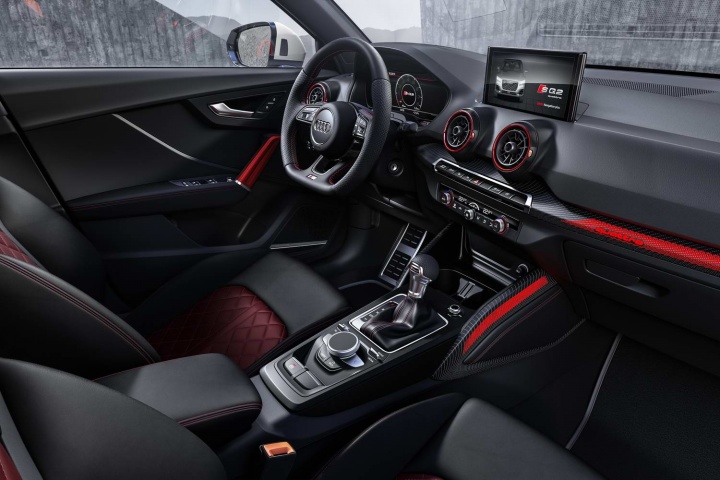 The 300hp Audi SQ2 is the latest fast crossover to launch - and it's very likeable.

Audi takes the 300hp 2.0-litre turbo engine out of the S3 and plonks it into the Q2, its smallest crossover/SUV, to create another high-riding performance machine. And this one feels like it really is a fine substitute for a hot hatchback.

If you think the standard Audi Q2 is a little bit busy on the design front, then what Audi has done with the SQ2 should please you. Black exterior detailing - specifically, for the grille, air intakes, door mirrors and those questionable side blades - tones it down a lot and if it's finished in a nice shade like Quantum Grey then it comes across as really well-judged. Some might say it visually veers towards 'boring' rather than 'understated', but with gorgeous optional 19s on it, side 'quattro' decals and a set of proper quad exhausts - unlike the TDI S-model Audis that are now filtering out with their fake pipes - the SQ2 looks great.

Inside, despite the presence of the luscious Virtual Cockpit and the sort of stolid interior finishing that has long been Audi's hallmark, it's clear the SQ2's dashboard architecture is already looking a little old hat. An MMI screen that pops up out of the dashboard and such wonderfully quaint antiquities like an actual, physical set of climate controls are being superseded by the digital screen revolution. And yet... everything in the Audi SQ2 works intuitively. You can change the temperature in the cabin without having to glance down at the centre console. It's all laid out beautifully. And the seating position is magnificent - you can set the driver's chair low to the body of the car, which keeps you in a semi-command position relative to the rest of road users, yet it allows you to feel ensconced in the little SUV as if it were a true sports car. Shame, then that, like any other Audi Q2, the rear-seat space for passengers is abject - oh, and the S-model loses 50 litres of boot space with all pews in place, due to the exhaust back-box under the boot floor. Drat.

There are a few contradictions here that might undo the SQ2's case. For instance, surely the reason you want a crossover or SUV is because they offer more interior space than a comparable hatchback, and (chiefly) they also offer a higher driving position? We mean, unless the SQ2 clearly beats a standard S3 on this score, what's the point otherwise?

And if these are the be-all and end-all to you, then perhaps the SQ2 is not for you. We've already touched on the fact that passengers in the rear aren't going to like you very much for making them sit there with their knees crammed into the backrests, the boot is only so-so for size and, in truth, the fast Audi SUV doesn't feel that tall when you're sitting behind the wheel. In fact... it feels much like sitting in an A3.

Yet, while these things might annoy those who are looking for a high-riding hot-rod, we happen to think they play in the SQ2's favour. Again, we've already mentioned that the driving position is suitably sporty and, to drive, the SQ2 feels 99 per cent akin to a hot hatch. Part of this is because it is only 95kg heavier than an S3 Sportback, which is basically one big passenger's worth of ballast, and its 400Nm of torque negates the possible issues that weight gain might have on performance. Any gear, any drive mode, any engine speed, the SQ2 is properly quick - and Audi has enhanced its soundtrack to make this one of the most appealing 2.0-litre four-cylinder noises we've heard yet. So, it definitely has the straight-line go to thoroughly merit the little red flash logo on the boot and its quad exhausts down below.

And, it handles superbly. The Q2 is not tall, by crossover standards, in standard trim, but the SQ2 sits 20mm closer to the deck - on firmer S-spec suspension - than its regular siblings. Throw in the usual traction-related attributes of the quattro all-wheel drive and this Audi can thoroughly entertain on the right roads, maintaining excellent control of its body, displaying a good degree of suppleness from its fixed-rate suspension and enacting rapid direction changes without any feeling of top-heaviness or wobble. It even has steering that is a long way from some of the objectionable set-ups Audi has foisted on its hotter S/RS models in the past, with none of the syrupy numbness around dead-centre, a good degree of weighting and even (whisper this) some tiny traces of feedback and feel. About the only area where it betrays its crossover DNA is on the brakes, but even on this score the SQ2 is one of the better fast SUVs out there when it comes to stopping power.

So, it can do the 'hot' stuff of 'hot hatchery' to a deeply impressive degree. And yet it doesn't feel appreciably worse to ride in than a normal Q2 when you're not charging along back roads in it. OK, the ride isn't perfect (it's typical modern German sporty stuff, which means it works wonderfully well at motorway speeds and perhaps not quite so wonderfully well at urban pace), but with 19-inch rims in the corners, the SQ2 is surprisingly smooth-mannered on even rougher road surfaces. Wind and tyre noise are admirably restrained, while on a long run at 110km/h or so, we managed to elicit 34mpg (8.3 litres/100km) from it. All of which means that, if you're only going to put kids in the back of it on occasion, the SQ2 ought to be able to pull off the twin tricks of being a refined family conveyance when everyone is loaded into its cabin, before transforming itself into a spirited, feisty hot-hatch-on-platform-boots when just mum or dad are behind the wheel and they fancy a bit of fun. Design brief thoroughly fulfilled, we'd say.

Sadly, Audi Ireland has confirmed that it will not be offering the SQ2 for sale. As it is, it would have to be quite a lot more than the €38,950 required to get into an S line 35 TFSI S tronic, which is the next most potent model down the range. It's very likely that the Audi SQ2 would cost around €50,000, which will place it firmly in the ballpark of the S3 Sportback - a car that is lower, lighter, faster, better on fuel and which can certainly lay claim to better packaging, most notably when it comes to space for rear occupants.

The Audi SQ2 is an excellent addition to the German brand's performance machine repertoire and it's one of the most 'car-like' hot crossovers/SUVs we've tried yet. It faces some stiff opposition, not least from cheaper in-house stuff that uses the same mechanicals like the Cupra Ateca and the incoming Volkswagen T-Roc R, but also from the likes of the hugely appealing BMW X2 M35i and any forthcoming Mercedes-AMG GLA. Nevertheless, the SQ2 will be able to stand tall amongst this crowd. Well, we say stand tall... we mean that metaphorically, not literally. Because it's this thing's compactness, its very un-crossover-like stance, which is what makes it so brilliant. 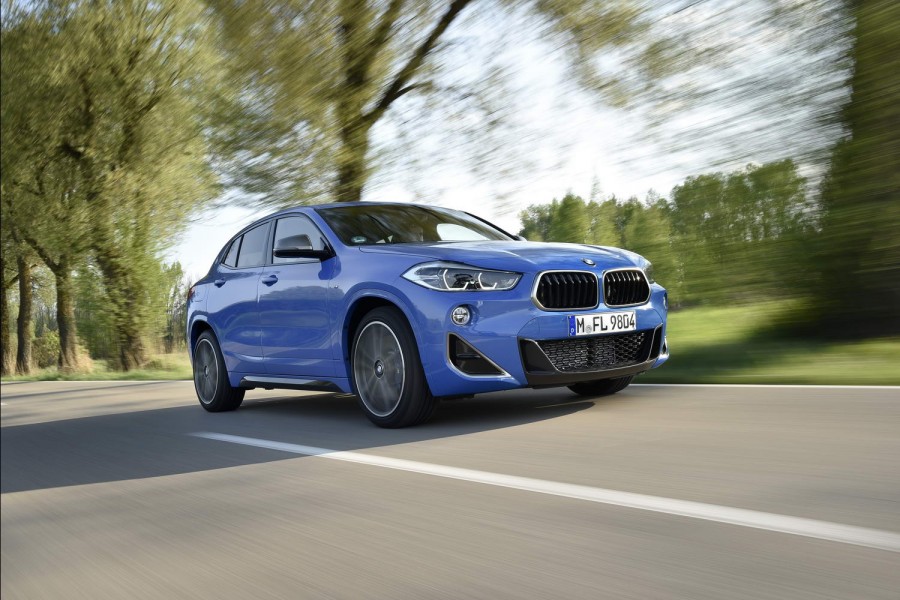 BMW X2 M35i (2019) review
BMW X2 M35i vs. Audi SQ2 (2019): BMW dynamically beats Audi once again, although it's closer than you might think. Superior engine and a differential that bites chunks out of corners are what elevates the fast X2. 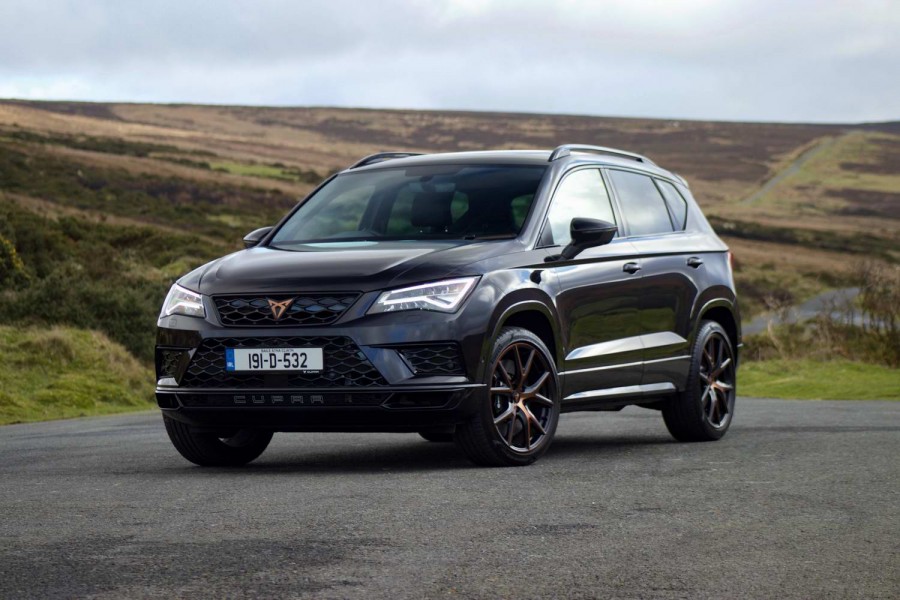 Cupra Ateca (2019) review
Cupra Ateca vs. Audi SQ2 (2019): some will lament the use of the Cupra name for a hot SUV, but the same engine/running gear as found in the SQ2 is employed in the Ateca to some seriously capable effect. 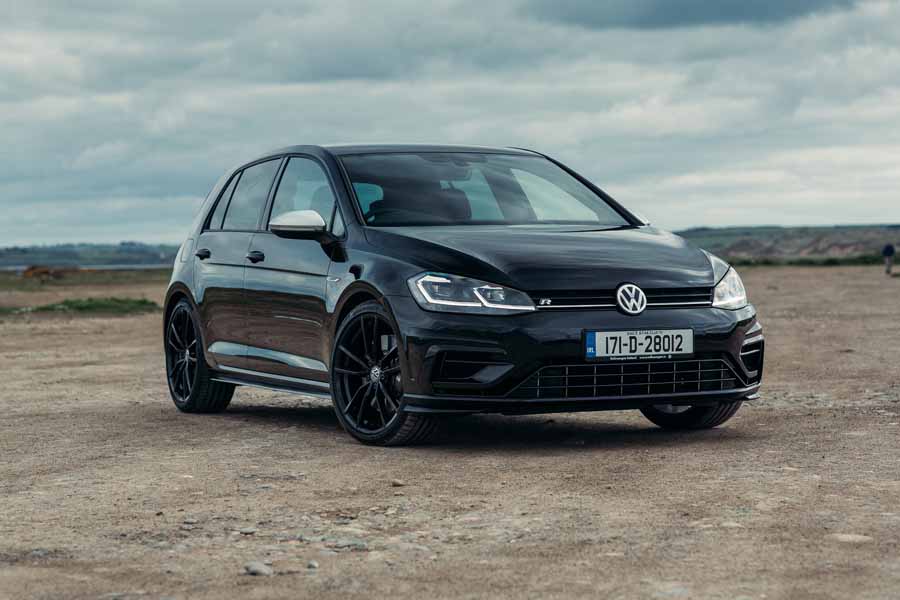