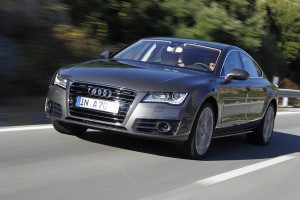 CompleteCar.ie is the first Irish site to drive the new Audi A7 Sportback.

Audi's latest offering, the A7, manages to seamlessly blend several genres into a seriously good looking package. We travelled to Sardinia to find out more.

Walking into an Audi showroom used to be easy. You would look one direction and see the Audi A3; the A4 was in the middle; and to the right was the executive line-up of the A6 and A8. Oh and let's not forget the TT. Now if you visit your local Audi dealership, not only will you need to clear your diary, but you might need to bring a map. In a few weeks time, the compact A1 arrives, there are several versions of the A3, A4, A5, a new A6 on the way, the A8, TT, R8, Q5 and Q7. And now we have the A7.

As you might expect, the A7 not only fits neatly - numerically - between the A6 and A8, but it also offers customers yet another blend of genres. This would be where we become cynical and talk about cars being created by marketing people and probably not being really needed by anyone. The BMW 5 Series Gran Turismo as a prime example. It is quite a nice car, but nobody really seems to know what it is for. You could say the same about the Audi A7 Sportback. That is of course, until you look at it. I mean, look at it.

It has been a long time since anything coming out of Ingolstadt was hit by the ugly stick, but Audi's design team has really surpassed itself with the A7. This is a shape that probably shouldn't work. It is a combination of saloon and coup? with a touch of estate versatility and yet the designers have managed to make it all work - where Porsche has so obviously failed with the Panamera. Despite being generously proportioned at almost five metres in length, the A7 hides its size well, with the tapered rear side windows removing lots of the visual bulk. There is an evidently long wheelbase and the rear end is nothing short of a triumph.

Inside, the design is dominated by the 'wrap-around', which is a horizontal line encircling the driver and the front seat passenger. The craftsmanship is first class, with the sort of refined luxury in terms of fit and finish that you'd expect from an expensive yacht or high-end hotel room. It is a technological tour-de-force too, with our test cars having the facility to create a Wi-Fi hotspot using 3G data, allowing your passengers to surf the web and also enabling the navigation system to use the eerily detailed Google Maps - it makes you feel like there is a satellite tracking you from overhead.

Details have yet to be totally finalised on the specification of the A7, but we do know that the 245hp 3.0-litre TDI quattro model will cost from €66,900 and for that you can expect to get leather upholstery, satellite navigation and the MMI infotainment interface as standard fit. Xenon headlights come as standard too, with the option of LED headlights, and you can choose 'MMI navigation plus', which adds the touchpad from the A8 - which features handwriting recognition.

You can also order internet services from Google and a massively impressive Bang & Olufsen audio system too. Alloy wheels will range from 18- to 20-inch in diameter and there will also be an S-Line pack. There are too many other customisation options to mention here, but some of the highlights are night vision assistant with highlighting of detected pedestrians; a speed limit display; adaptive cruise control with stop-and-go function; Audi side assist; and Audi active lane assist.

The only engines that buyers are likely to pay attention to in Ireland are the 3.0-litre turbodiesels. There are petrol engines available (a 204hp 2.8-litre FSI unit and a 300hp 3.0-litre FSI option), but these are likely to be ignored by Irish customers. There will eventually be two TDI diesels to choose from. At launch in November the 245hp/500Nm 3.0-litre TDI model will be available. This comes with quattro all-wheel drive. This engine is a gem. It is quiet, torquey and potent and with quattro the power goes down as it should, with zero fuss. From the first quarter of 2011 there will be a 204hp, front-wheel drive A7 too, which will drop the car into Band B (from Band D), but as yet we don't know how much you will save on the purchase price. Quite why you would want to save a few thousand Euros and not have quattro is a little beyond me, especially for the sake of saving €146 in road tax.

The A7 drives much like an A5 Coupe, but has the comfort and opulence of an A8. Rear seat passengers of the very lanky variety will prefer the A8, but up front, if you like to do the steering, then the grip offered by quattro makes for a rewarding drive. The steering could have done with 10 percent more feel and the brakes with about 15 percent more bite. Both work well, but when you are pushing a car hard, you want both to shout at you rather than to whisper.

Acceleration from 0-100km/h takes 6.3 seconds and top speed is limited to 250km/h. Fuel consumption is just six litres of fuel per 100 kilometres on average, which corresponds to 158g/km of CO2, so even this model, with quattro four-wheel drive, is only in Band C. Another compelling argument for sticking with the quattro version is that you get the seven-speed S-Tronic transmission, while the front-wheel drive 204hp 3.0-litre TDI A7 will get the Multitronic transmission, which is okay, but only really okay. In short, buy the quattro.

Boot space is massive, ranging from 535-1,390 litres and this does allow you to load up enough golf clubs for your own little tournament. The facility to use Wi-Fi is interesting, but would be dependent on you having a cosy relationship with your mobile phone provider. While countries like Germany offer flat rate plans, they aren't that easy to come by in Ireland. Surf the web in your car while abroad and you'll need a stiff drink after your phone bill comes in.

The new Audi A7 deserves special attention because it is remarkably good looking, superbly built and, if you compare it to the larger A8, actually pretty decent value too. The A7 is so good that it could actually be a tough choice between a well specified version compared to the flagship A8. Nice to have the choice.