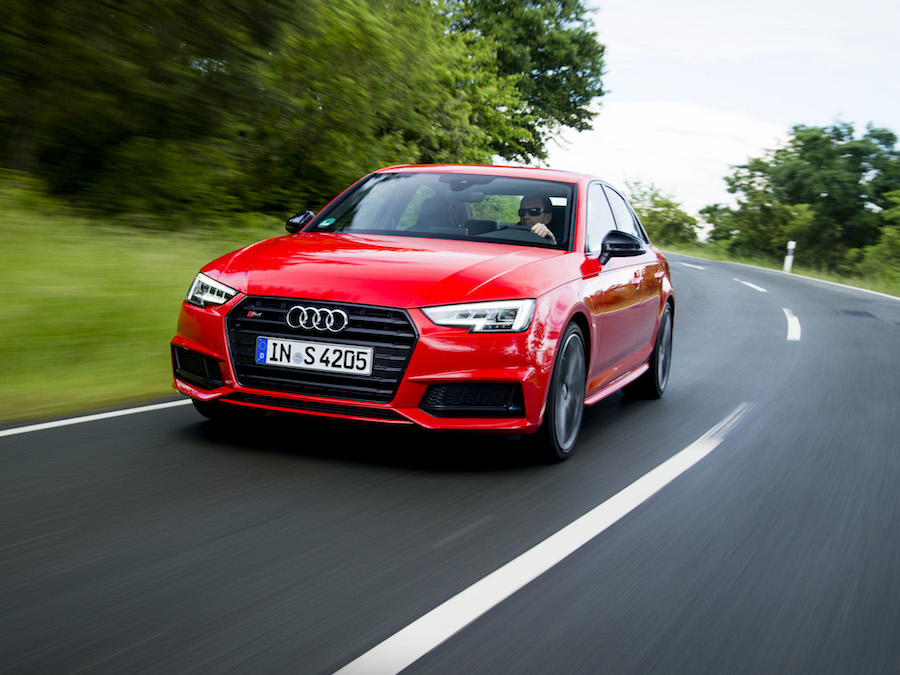 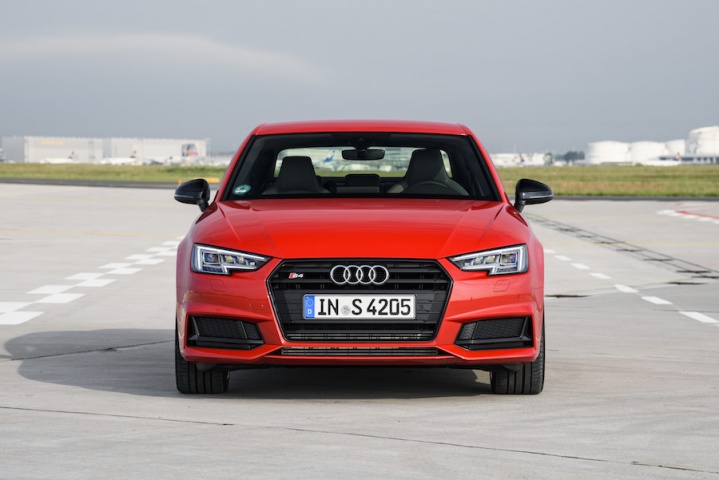 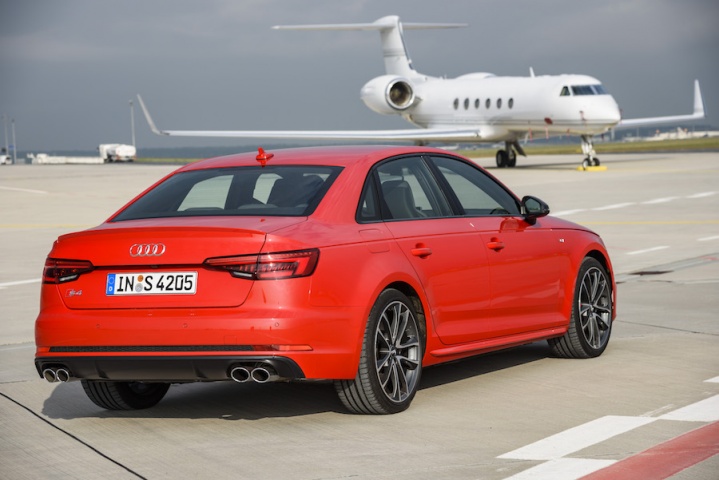 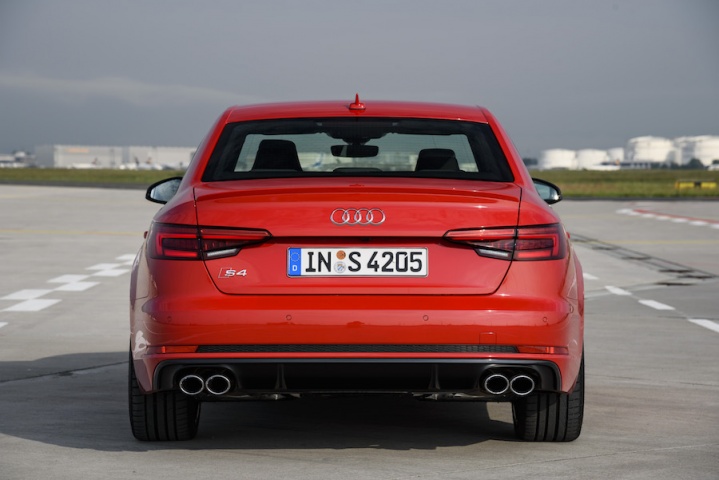 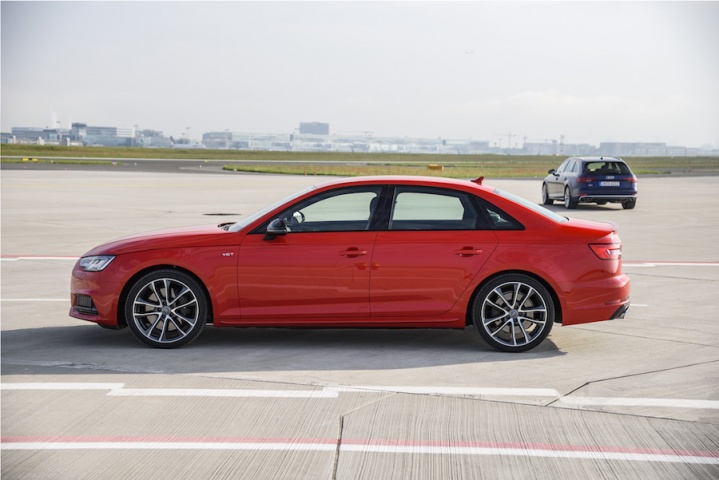 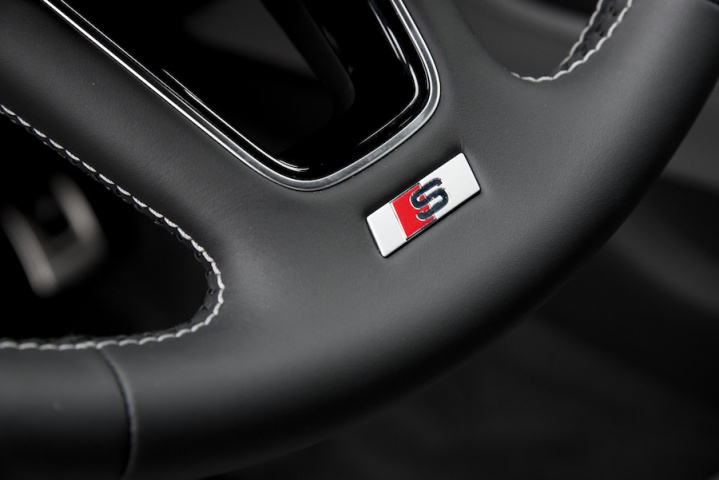 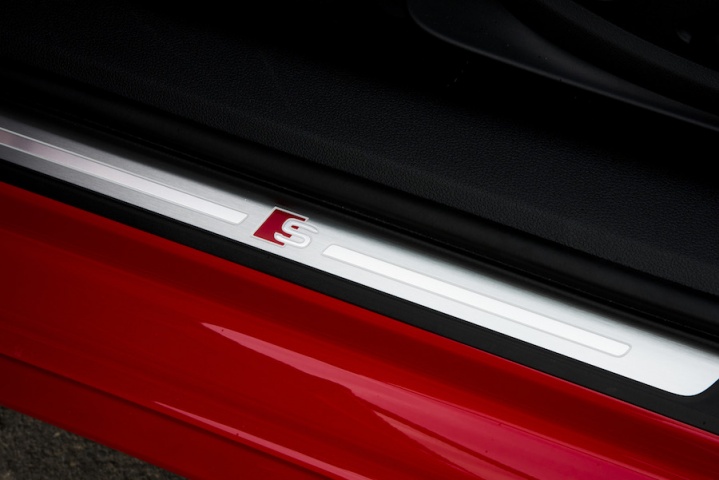 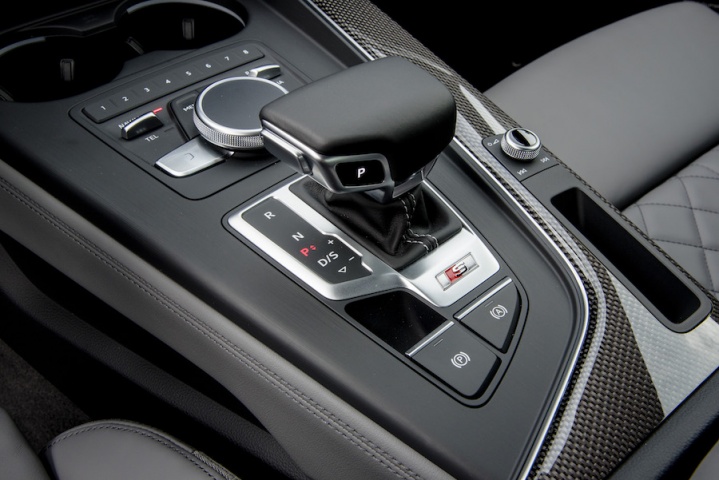 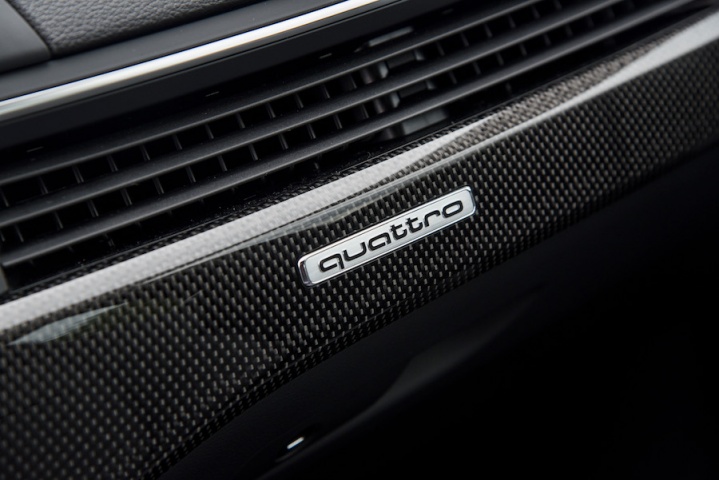 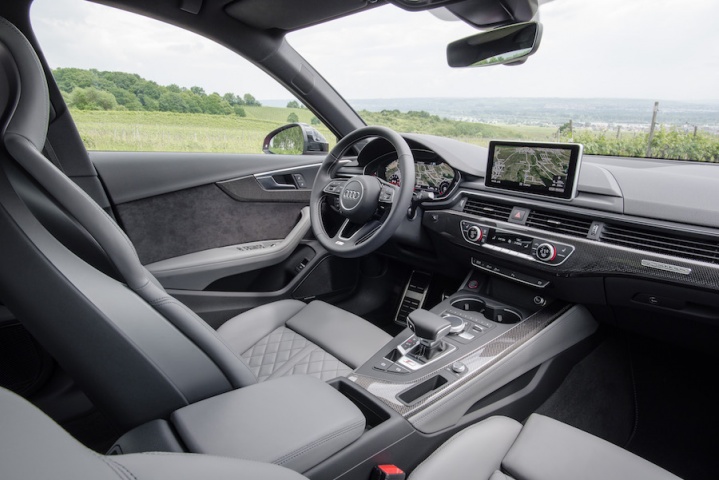 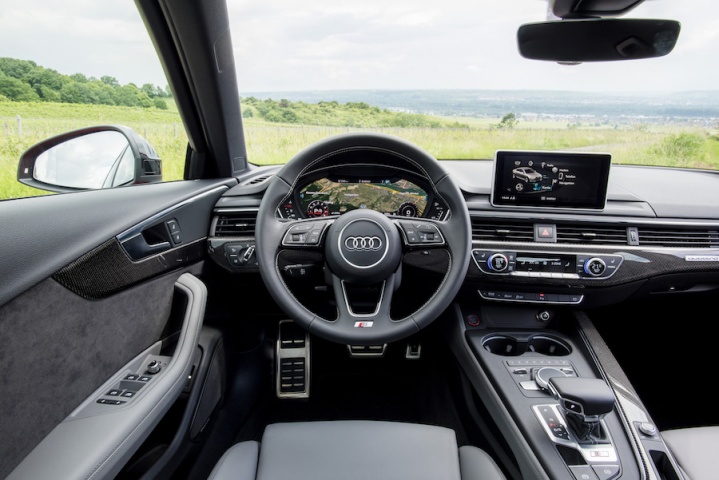 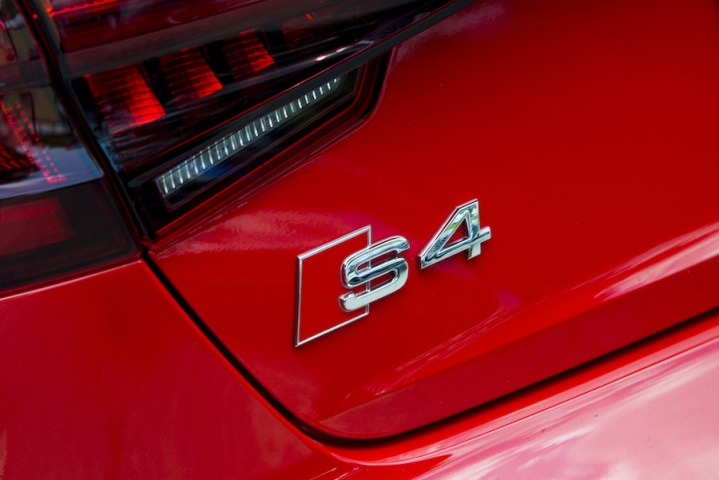 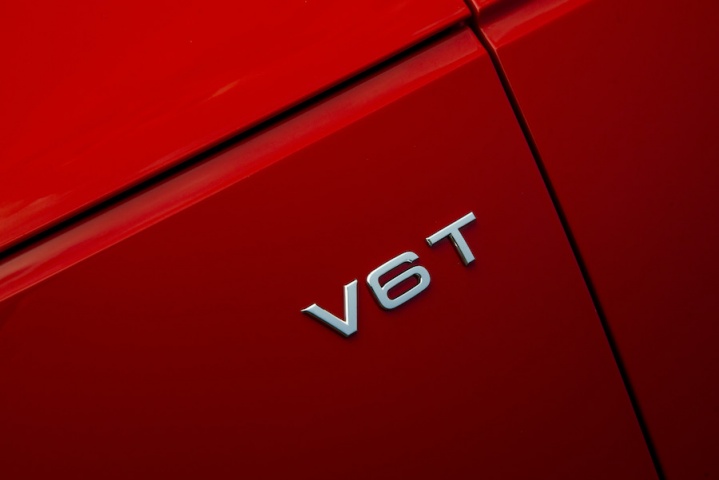 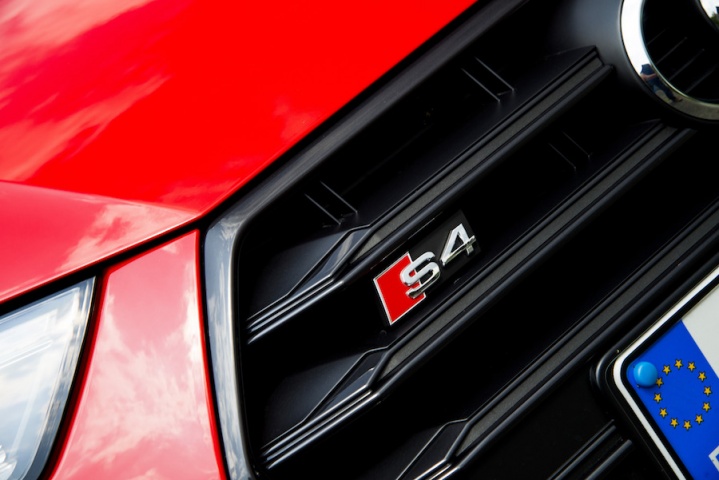 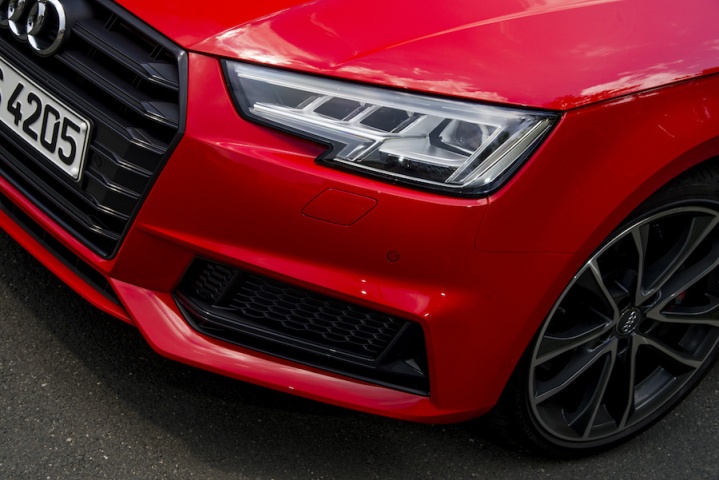 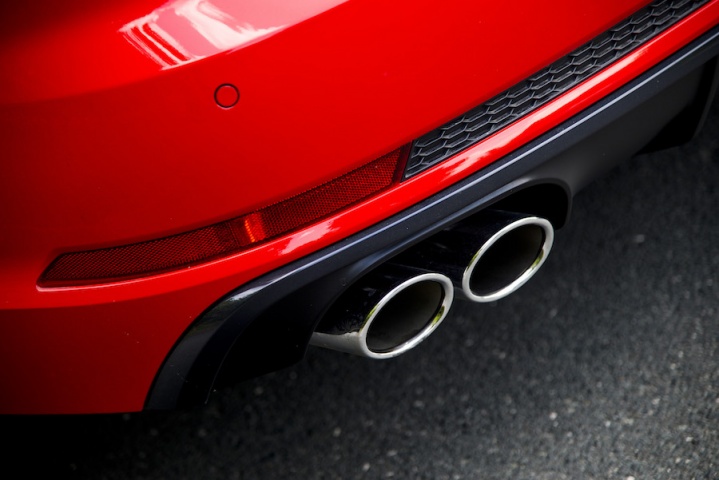 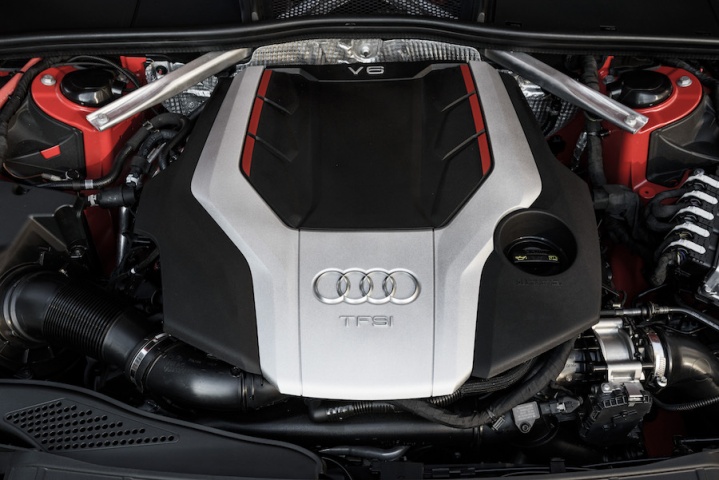 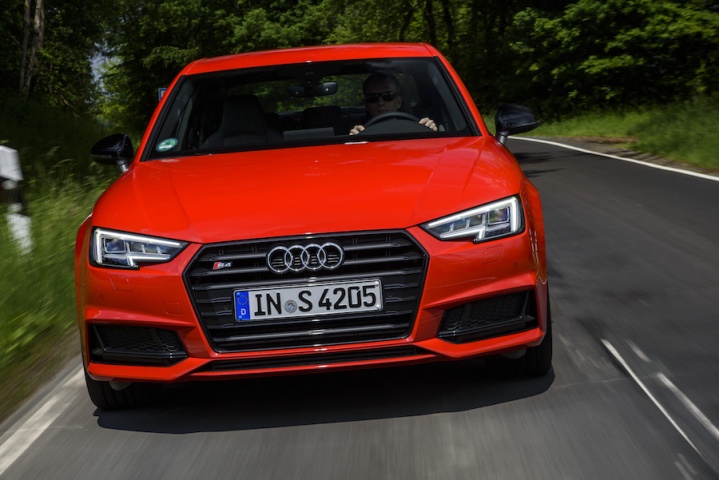 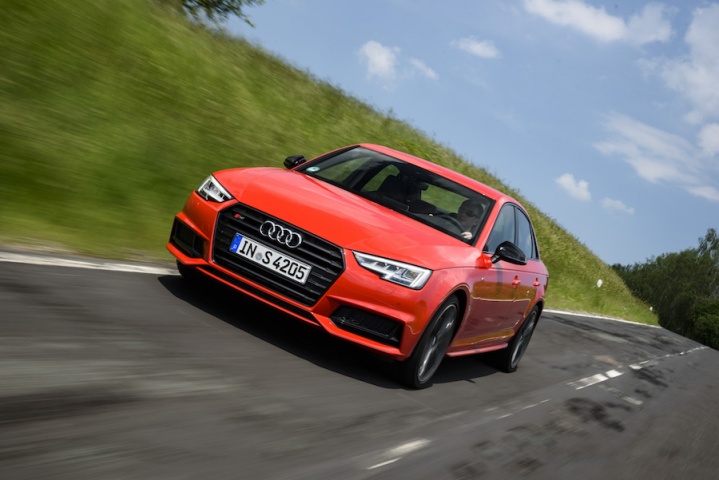 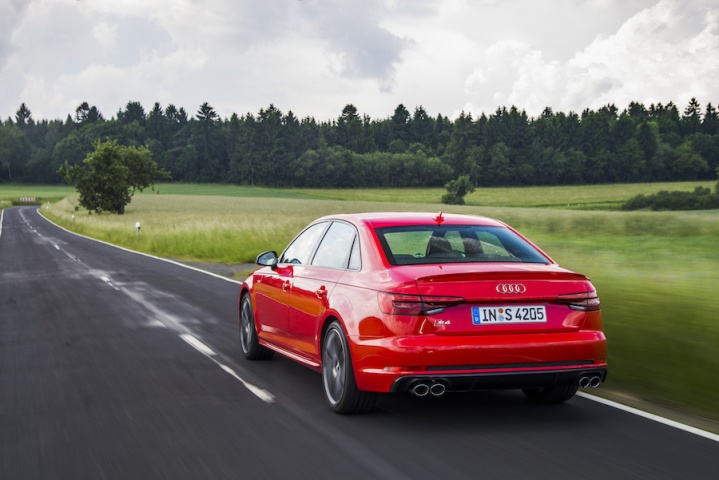 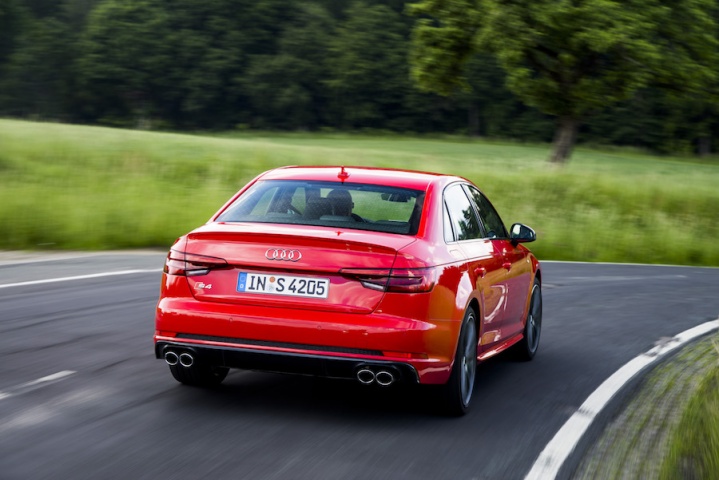 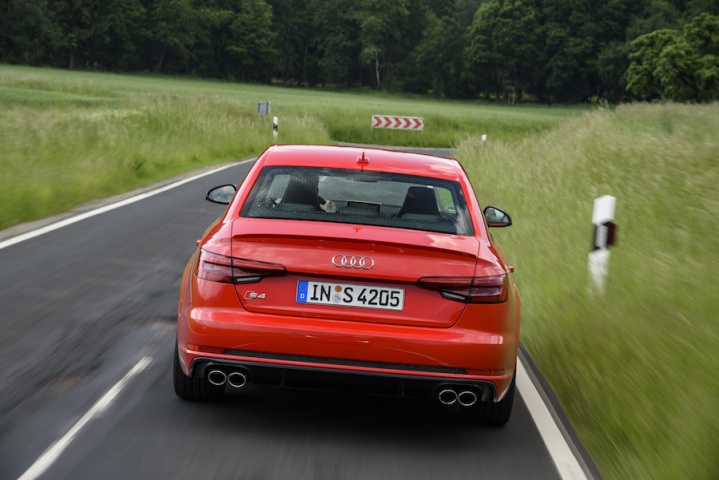 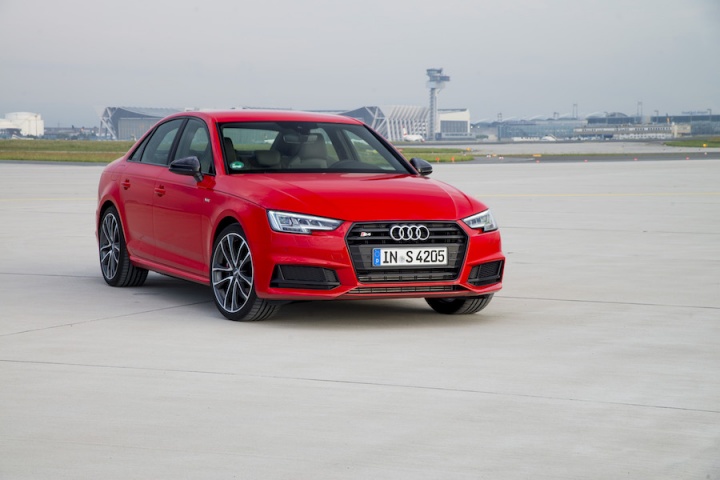 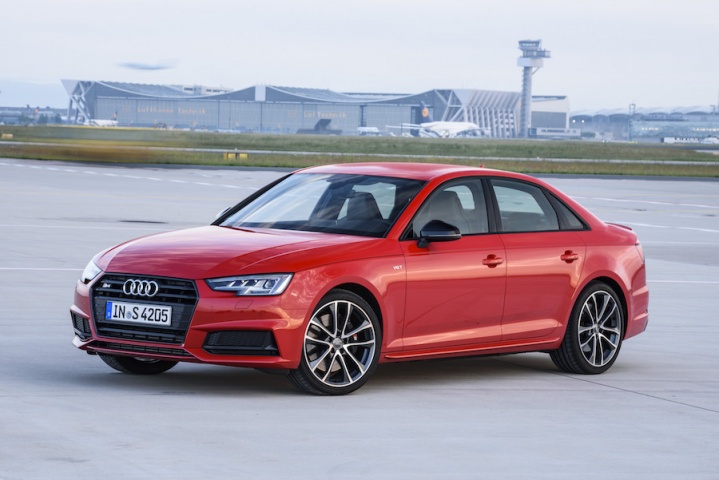 Like the slinky new Audi A4, but fancy a little more performance? The new S4 may be for you, so.

It was only a matter of time before the lighter, sharper looking Audi A4 got its first high-performance makeover. The result is the S4 saloon and Avant, packing a new turbocharged 3.0-litre V6 engine with more power and torque than its predecessor, yet less weight to cart around. Four-wheel drive is standard of course and yet the new S4 is more efficient than before, which may mean it'll be less expensive to buy in Ireland too.

It's so easy to dismiss the current Audi A4 as a very restrained facelift of its predecessor, but you'll banish such thoughts from your mind as soon as you see one for yourself in daylight, as it's a sharper, more elegant looking vehicle with plenty of exquisite details to make its owner feel they're driving something special. That whole vibe is enhanced in the S4 thanks to a significant, yet still relatively subtle, S makeover. Up front, the grille is finished in 'twilight with double slats in aluminium matt', but it's the detailing to either side that grabs your attention. The LED headlights feature dynamically sweeping indicators (they're at the back too) and a daytime running light signature that combines with the matt aluminium inlays in the larger lower air intakes to emphasise the width of the car.

Round the side, there are aluminium-look door mirrors and window trim, new side sills and bespoke alloy wheels (all cars at the launch wore 19-inch rims, though it's expected that Irish versions will ride on 18s as standard). Within those wheels are gloss black brake callipers with an S logo, which may be finished red optionally. The S4 saloon features a modest boot spoiler, though it can be instantly identified by its twin oval exhaust tailpipes on either side of a new rear bumper. A diffuser (in matt aluminium) is incorporated into that. Finally, and probably as significant as anything else, there's a 23mm drop in the ride height in comparison to a standard Audi A4.

Even if you're still not impressed by the exterior design (seriously, go see one in the metal, as the pictures don't do it justice), I'd wager the S4's cabin will win you over. It retains the stylish design and attention to detail of the normal A4s, but with a suitably sporty sprinkling of S reminders. Irish specifications have yet to be confirmed, but there'll certainly be an S-badged multifunction steering wheel (with any luck the circular one, not a flat-bottomed item) and matt brushed aluminium inlays. We are optimistic there'll be S sports seats upholstered in Nappa leather too, along with MMI Navigation plus, though the Audi Virtual Cockpit instruments are likely to be optional. They feature an additional Sport screen view for the S4, incidentally.

Audi made it difficult to really assess the chassis of the S4 as it will be for the majority of buyers, as all test cars at the launch were fitted with 19-inch wheels (the lower profile tyres will detract from comfort, though they look sensational), variable speed-dependent Dynamic steering (variable ratio and power assistance), Continuous Damper Control (CDC) adaptive sport suspension and the Sports differential for the rear axle. As standard, the S4 comes with quattro four-wheel drive, which, by default, splits the engine output 60:40 in favour of the rear axle. That's in a bid to give the car a more dynamic feel on the exit of corners. The Sports differential further enhances this sensation by rapidly dividing the power up between the two rear wheels as well. In dry conditions it took a hell of a lot of provocation of the chassis (and the ESP stability control turned to Sport mode or off) before the limits of grip were tested enough for the operation of the differential to be felt, but it should prove entertaining and adjustable on the limit when grip levels are low.

It'll be interesting to see where the fixed damping sits in the continuum from comfortable to sporty, as there's a notable difference between Comfort and Dynamic modes in the CDC system, the latter considerably firmer with less unwanted body or wheel movements. It's less comfortable as well, but never harsh riding as such. Grip levels in the dry are very high, but the steering tells you very little about what's happening at the road level and so you end up second-guessing how fast a corner can be taken rather than feeling your way through and adapting. In fairness, most people won't broach the limits on the public road, certainly in the dry. While the steering is wonderfully direct as you turn into a corner more, the variable ratio effect often means you end up over-steering, requiring a little lock taking off, and it's not entirely predictable with it. Here's hoping that the standard steering set-up has a more natural feel and more feedback from the tyres too.

We realise that many buyers of cars like the Audi S4 just want the fastest or most impressive car in the line-up and it doesn't disappoint overall. The 3.0-litre V6 engine puts out a chunky 354hp and 500Nm of torque (up 21hp and 60Nm on its predecessor) for starters, though it sounds better when rumbling around at relatively light throttle openings than it does chasing the redline. There's a pleasing growl from the quad exhausts in particular in Dynamic mode. The S4 is some 75kg lighter than before too, meaning that added grunt has less metal to propel, which explains the rather impressive 4.7-second 0-100km/h time. The quattro four-wheel drive system should mean excellent off-the-line traction regardless of conditions too.

As standard there's an eight-speed automatic transmission fitted, but it's not quite as smooth as we expected, even in Comfort and Efficiency modes. Audi's engineers said we were driving pre-production examples of the S4 and some finessing of the powertrain was still in the pipeline. It can coast on the overrun, comes with stop-start and the obligatory throttle-blips in Dynamic mode when changing down. Shame that the standard gearshift paddles fitted to the steering wheel are so plastic in their construction, as you'll want to change gears for yourself when the road turns interesting. And yet, despite the hardware and the impressive stats, the S4 isn't quite as engaging or as exciting to drive on a good road as we were anticipating. For now, we'll put that down to the optional steering, so hopefully we'll get to test a standard system on Irish roads in the not too distant future.

Our rating is based on an estimated starting price of some €62,000, which has yet to be confirmed. Yes, the new S4 is cheaper to tax and fuel than before, but it's still a relatively expensive car to run so will appeal to a relatively small group of buyers with discerning taste. Once we know the standard specification we'll update this review.

BMW 340i: can't be had with four-wheel drive, so won't be as capable in winter, but is a more engaging car overall. Audi is more special inside, though.

Jaguar XE S: again, no all-wheel drive option, but straddles the middle ground between the Audi and the BMW in terms of driver engagement. Arguably one of the most distinctive options.

Mercedes-AMG C 43 4Matic: the Audi S4's closest rival in technical make-up, though we've not sampled it as yet.

It's difficult not to be impressed by the performance and technical make-up of the new Audi S4. It's also a beautifully made car that oozes quality. And while it isn't as engaging a driving experience as keener enthusiasts might want, it's very fast and competent by any measure. We're hoping the forthcoming RS 4 ramps up the engagement a notch, but until then the S4 makes a fitting range-topper for the A4 line-up.