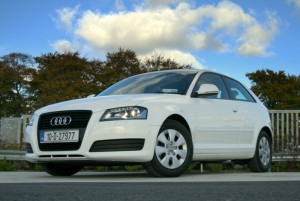 We've taken delivery of the most efficient Audi A3 you can buy.

Our latest long term test car is the Audi A3 1.6 TDI. It's the cheapest way into a diesel-powered Audi A3. To kick things off we'll put the car through our standard test, but then it'll be subjected to the magnifying glass as we spend the winter months with it.

Audi is on a roll right now and it's easy to see why. The A3 has been around for a while, yet it's still contemporary and seen as something of a status symbol in the world of hatchbacks. Our example features a few tweaks in the name of economy, such as a lower ride height and the lightweight 15-inch alloys. In Ibis White it looks the part. Audi added optional Xenon lights with LED daytime running lights to the car and they help it stand out.

Someone went a little mad with the options list on the interior of our test car though. Even if you ignore all the goodies (more on those below), it's clear that the A3's cabin is one of the best in the class. The switchgear is tactile and well-placed and there's a sense of quality throughout. There's not a load of space in the rear, but that's true of most cars in the sector with three doors.

You'd swear that this new 1.6-litre TDI engine has more than 105hp. It feels much quicker from the off. That's thanks no doubt to 250Nm of torque produced between 1,500- and 2,500rpm. Though that's only a 1,000rpm band, the A3 never feels flat-footed and it's easy to keep up with fast traffic in most situations. Refinement is acceptably good too.

The five-speed manual gearbox is geared for economy, but the engine is up to the job of the high ratios. The shift change itself is slick and smooth.

Audi has done a fine job on the A3's chassis. It's not particularly sporty, but it is agile and the direct steering makes it enjoyable to drive at regular speeds. Yet it also deals well with bumps and surface imperfections.

If you look at the outright purchase price of the Audi A3 and compare it to the likes of the identically engined VW Golf BlueMotion then it doesn't seem all that good value. However, it's priced on a par with the BMW 116d, which is where it is targeted in reality.

This A3 will pay back dividends at the pumps. Its official combined cycle fuel economy figure is 3.8 litres/100km (74.3mpg), which is astounding. Emissions are just 99g/km, putting the car into Band A for tax at the time of writing.

It's easy to forget about the Audi A3, as it has been on sale for a number of years now. However, it still merits attention if you're in the market for a classy, understated hatchback that is good to drive and has an upmarket feel. It may not be as cool as the new Audi A1, but it's still a very good car in its own right.