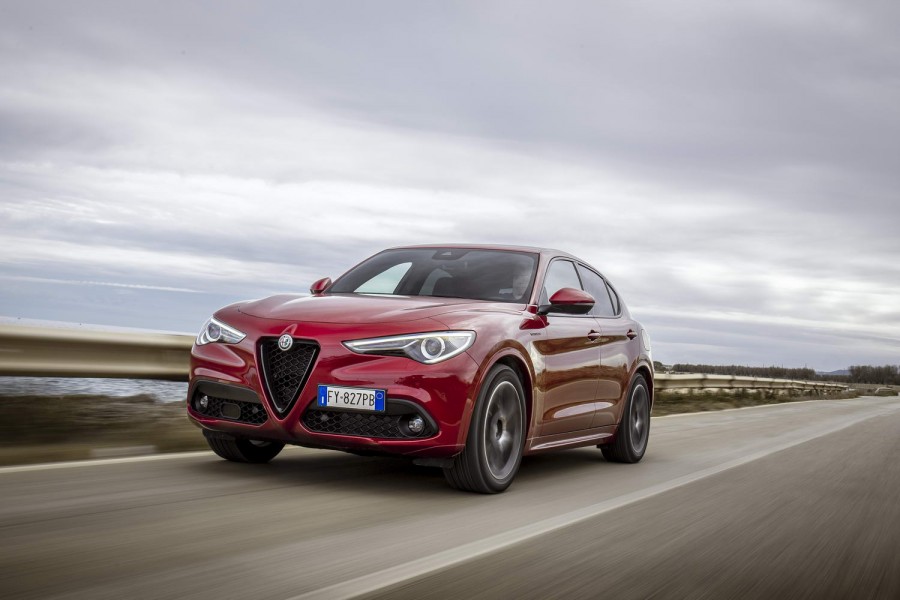 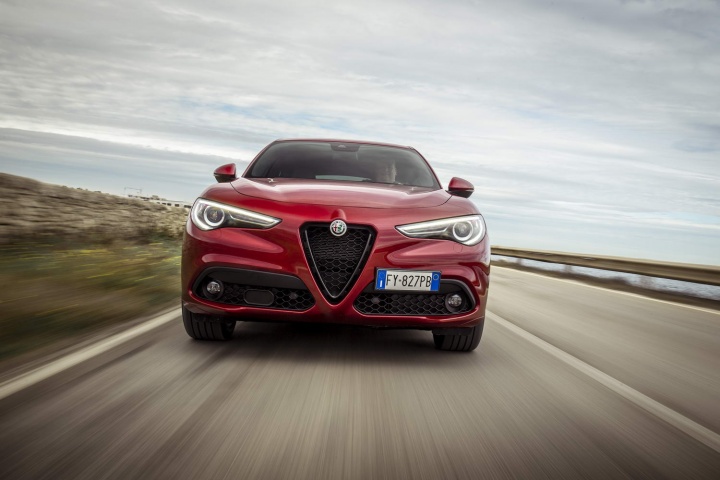 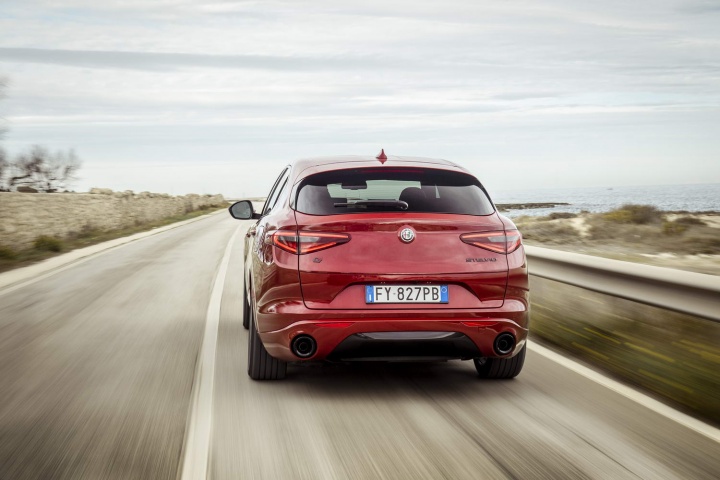 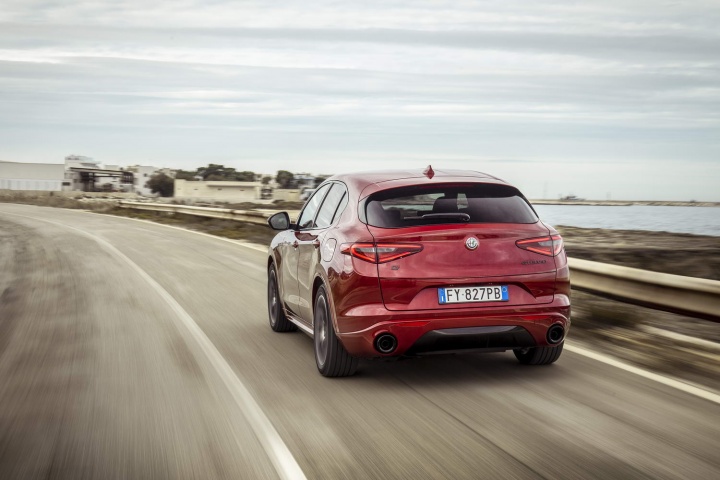 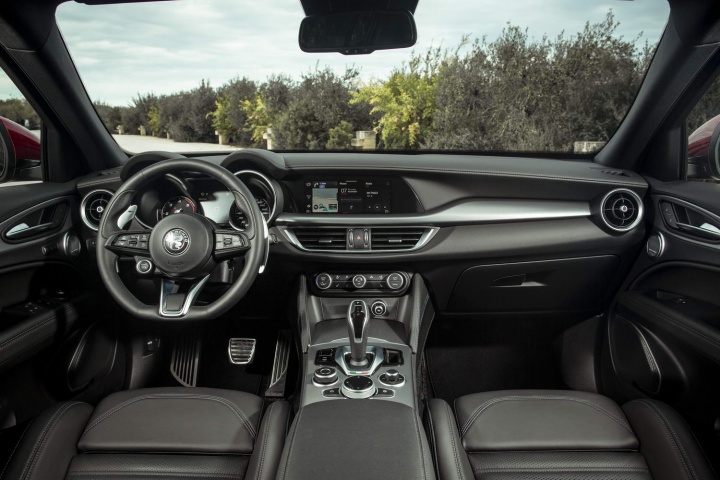 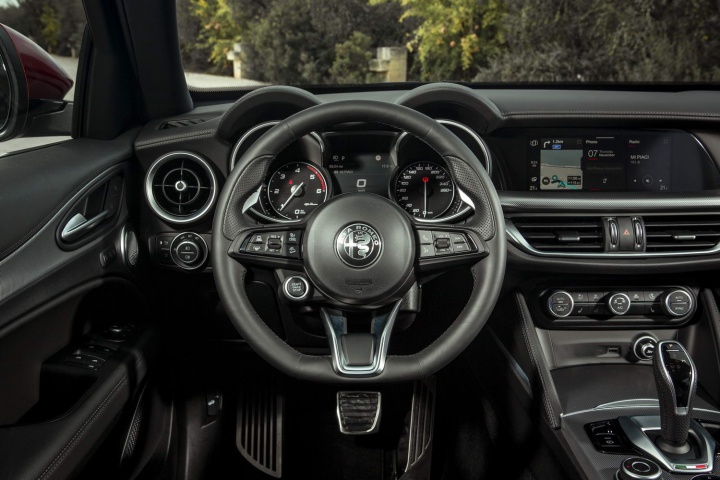 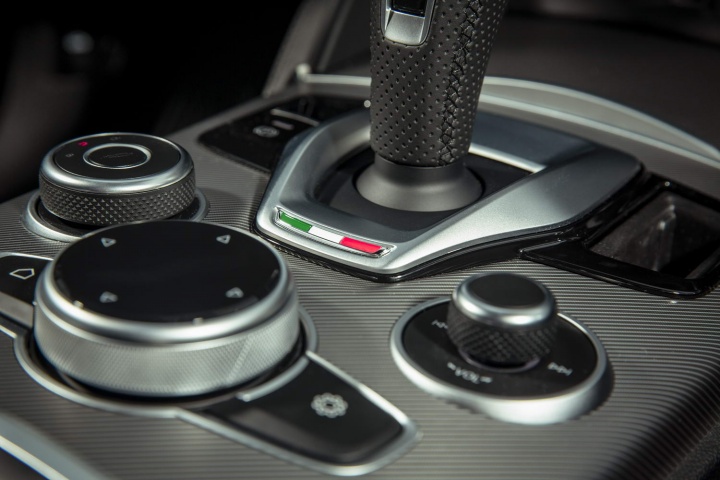 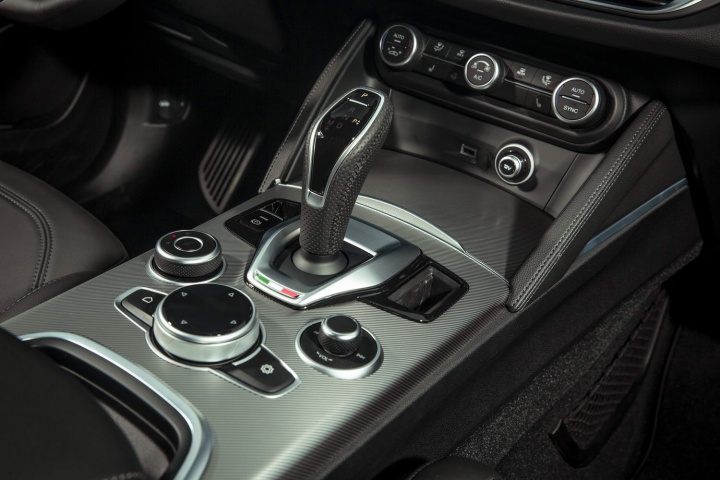 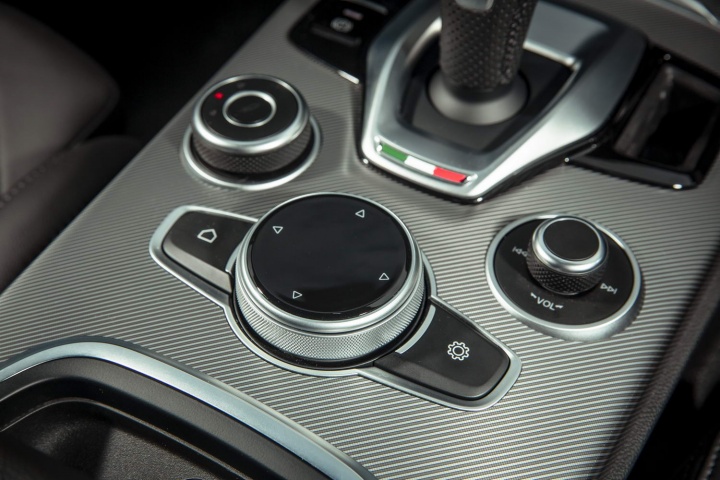 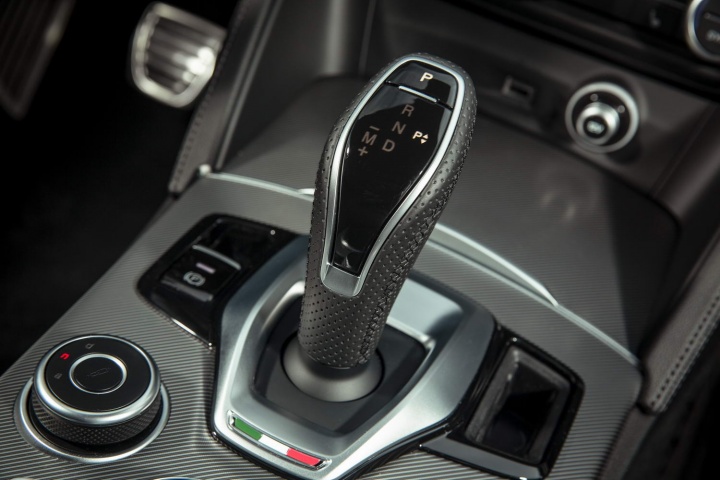 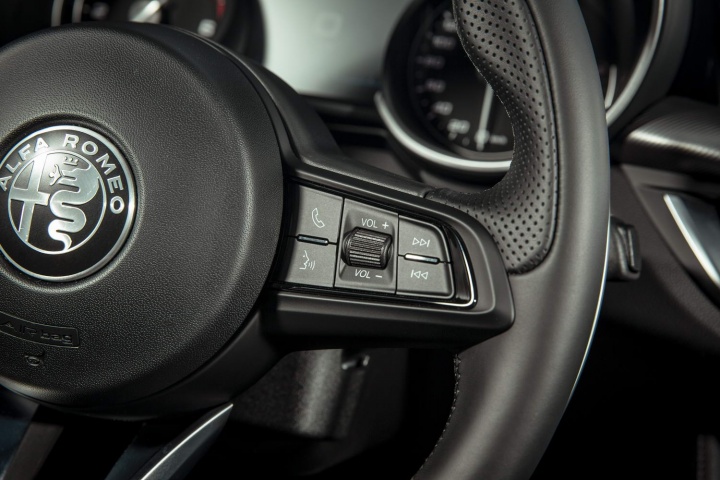 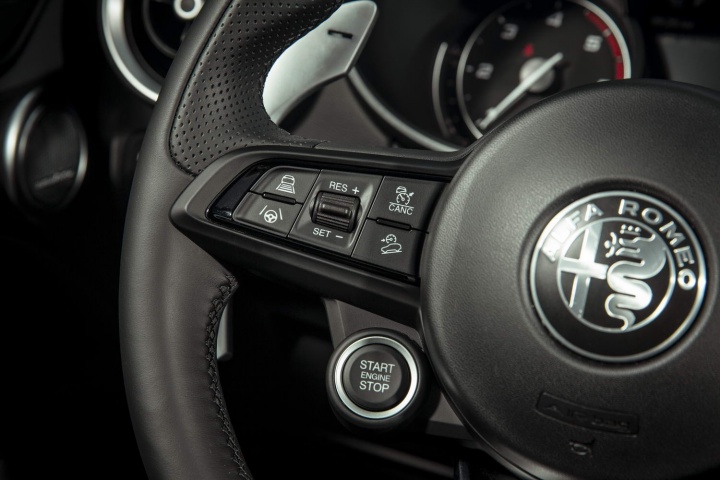 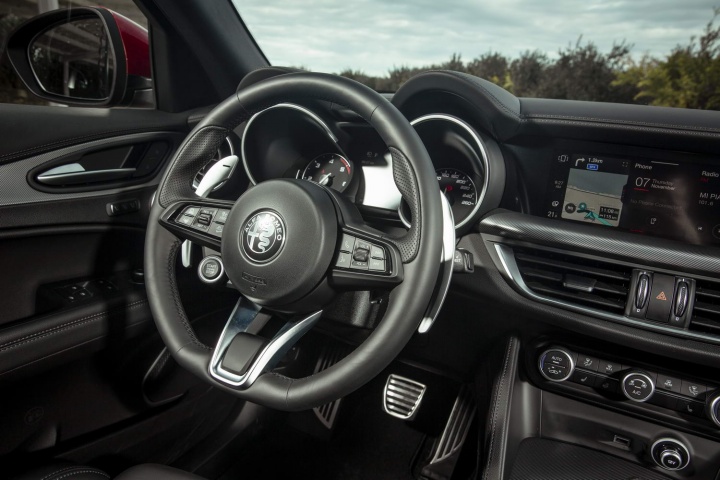 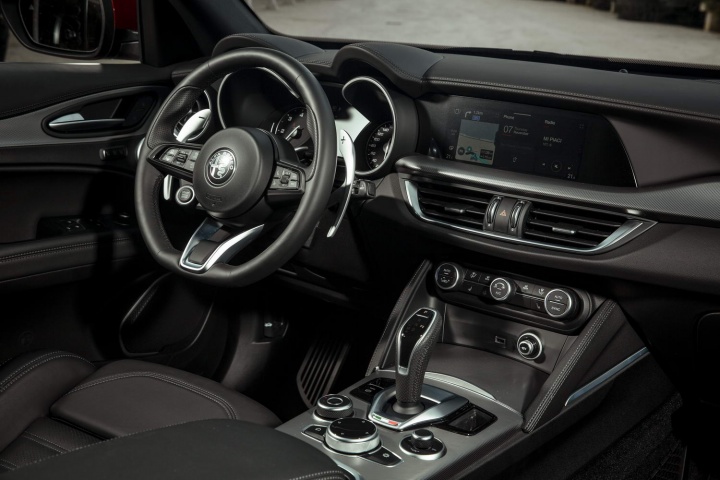 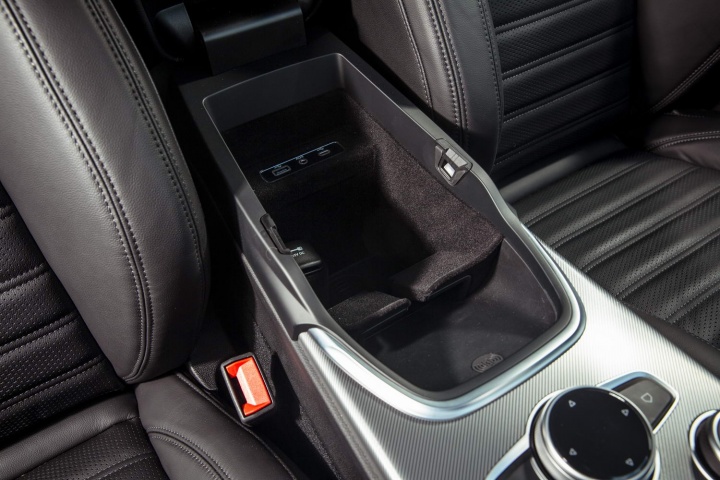 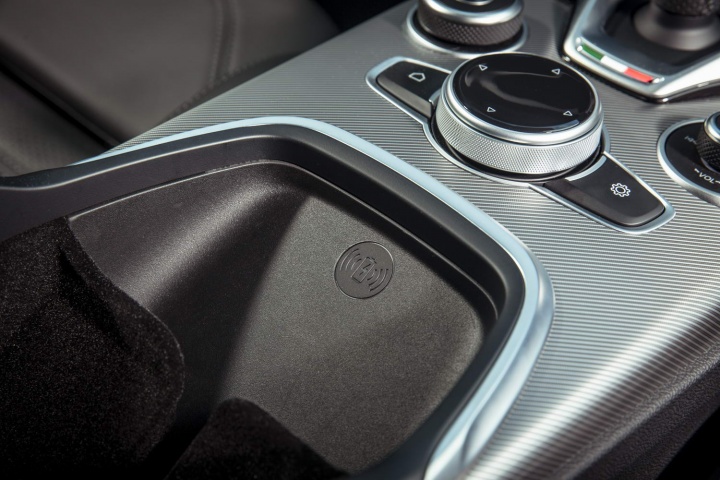 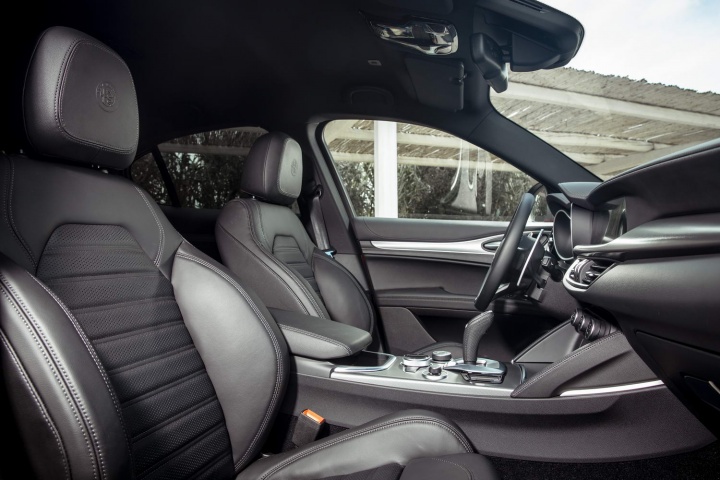 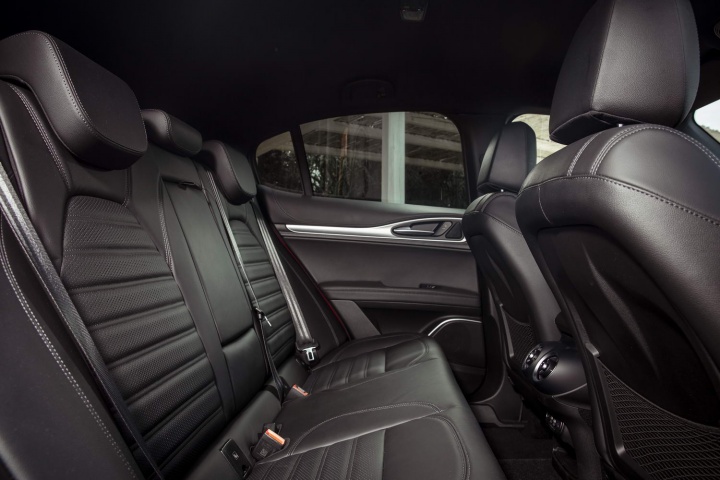 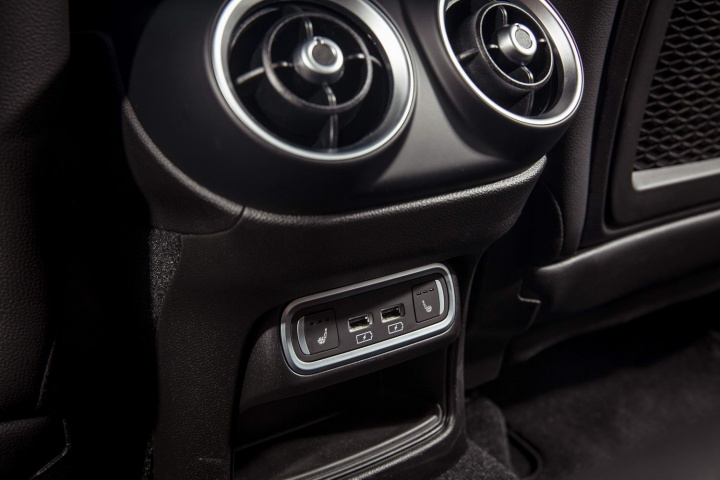 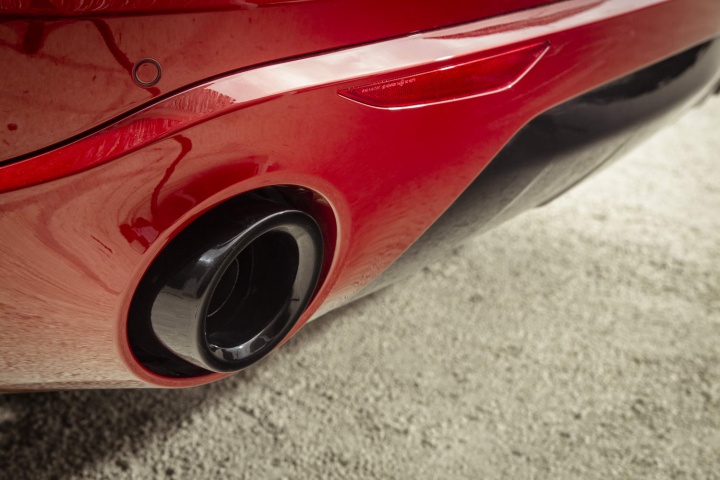 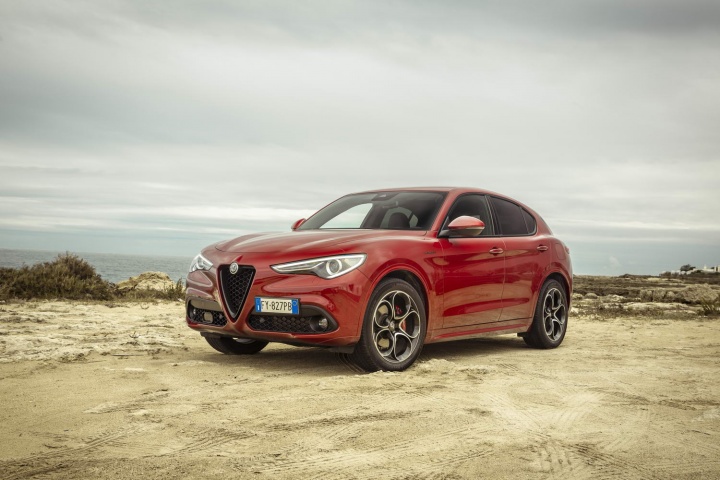 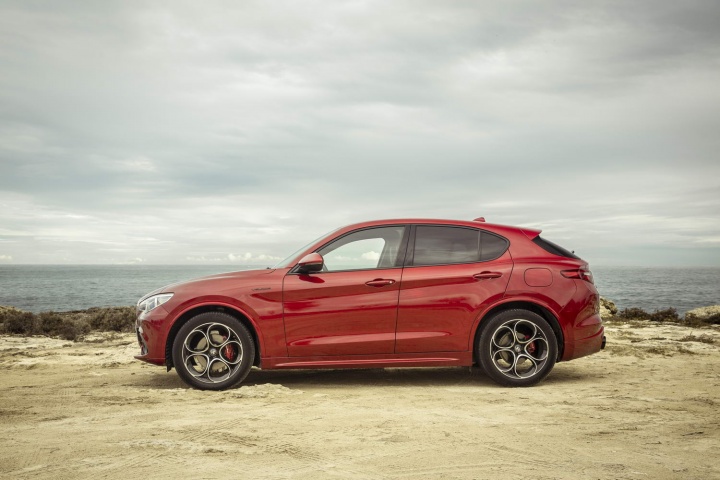 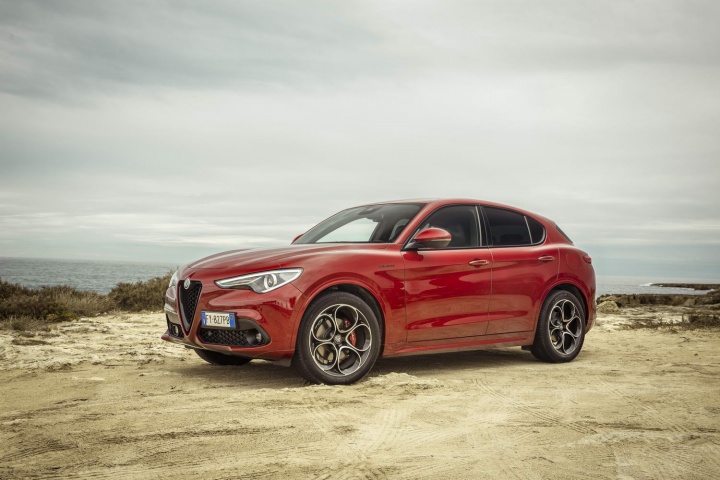 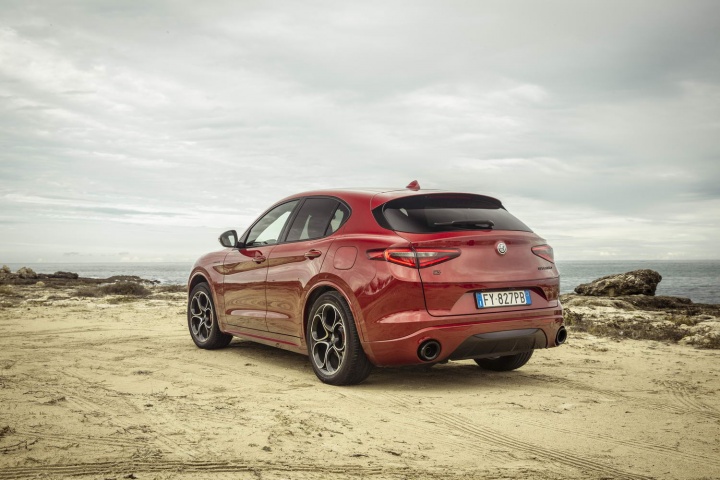 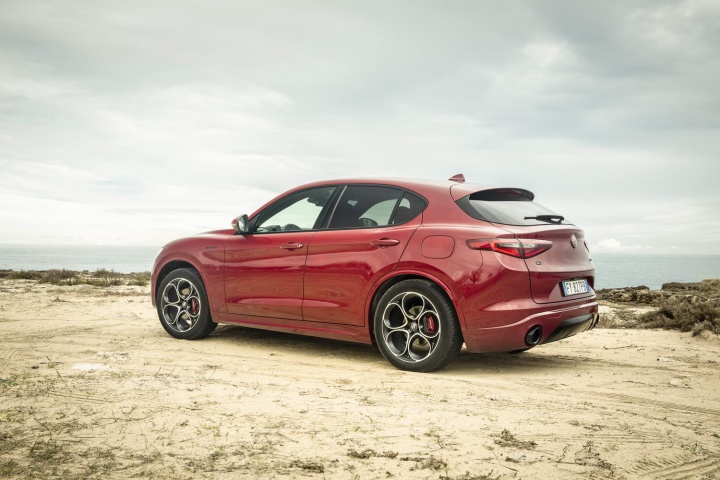 Interior updates for the Alfa Stelvio SUV, as well as a new 280hp model.

Alfa updates its Stelvio SUV with the same round of revisions that the Giulia saloon receives for the 2020MY, and then adds a sub-Quadrifoglio level of performance in the form of the new 280hp Veloce model - so that's what we're testing here.

Alfa has left the Stelvio's handsome looks alone for this 2020 model year update, wisely deciding that the SUV was striking enough as it was. It's not the prettiest Alfa that's ever lived, although that's some preposterously tough competition to have to beat, but as these mid-sized, premium SUVs go, the Stelvio is a bit of a looker. What's new visually is this Veloce model. It uses the 280hp turbocharged petrol 2.0-litre engine from the Giulia Veloce, which admittedly has been available in the Stelvio prior to this under different names (such as Edizione Milano or the Ti); all the Veloce adds is body-coloured styling right down to the skirts of the Alfa, gorgeous 20-inch alloys, detailing in Dark Miron and an interior enlivened by aluminium trim and some heated, six-way-electrically-adjustable part-leather sports seats.

As part of the wider fettling of the Stelvio family, though, all models gain the 8.8-inch touch-sensitive infotainment with sharper graphics, the finer seven-inch TFT display in the instrument cluster, a new leather-wrapped steering wheel and gear lever combination, better interior storage solutions with a neatly integrated smartphone wireless charging pad for good measure, extra sound suppression swaddling the passenger compartment, revised steering and a general sense that the interior wasn't knocked up in a couple of afternoons very close to the Stelvio's pre-agreed launch date. OK, it's not going to make Audi wake up in a cold sweat at night, worrying about ergonomics, soft-touch materials and general haptics, but the Alfa's cabin is far more comparable to those found in and amongst its peers.

The Veloce is a proper hoot to drive. All Stelvios drive brilliantly, as far as SUVs go, but some are more equal than others and the Veloce is going to go into that latter category. Although we should sound a note of caution here and warn that, for an all-wheel-drive vehicle, it's a proper handful if you disrespect it. Go ploughing into a corner 30- or 40km/h too quick and you'll (quite rightly) get a lot of understeer, which will transition to snap-oversteer if you decide to back off the throttle to correct it. In short, this is an SUV that will not flatter the ham-fisted. In fact, it might do the exact opposite and spit them off the road in a fit of Latin pique.

Drive it properly, mind, and you'll be delighted with its balance, its feeling of rear-led agility and that lovely 2.0-litre engine. This 280hp unit is a gem no matter which Alfa it is installed in and, as the Veloce only weighs 1,660kg in this trim (case in point: the BMW M340i saloon we drove recently is fully 85 kilos portlier), then it's another genuinely sporty SUV. The performance is more than adequate from that four-cylinder unit, its horsepower ably abetted by 400Nm of torque kicking in from just 2,250rpm, while the Q4 traction amplifies what pace the Stelvio Veloce already has to rock-concert-like levels. Throw in the usual exquisite Alfa steering, an eight-speed ZF automatic gearbox that's beyond reproach and the Italian company's magnificent damping, and what you have here is one of our favourite SUVs of all, sharpened slightly.

Yet, like the Giulia 2020MY, it's the quality and refinement gains that will instead please most people who might - prior to now - have considered an Alfa were it not for the sub-par interior. The cabin feels of a much higher standard throughout, as even the dash tops and door cards are more substantial than they were before, while the new rotary wheel for the infotainment (if you don't like operating the touchscreen, Alfa has preserved two control systems for you) is less like something out of a cheap Christmas cracker than it was previously - it's still a long way off an Audi MMI or BMW iDrive dial, but it has a little more heft and solidity to it in its current incarnation. However, the steering wheel and gear lever are both tactile delights, where only one of them was before (hint: it wasn't the cruddy gear shifter), while the digital displays in the Alfa are crisp, clear and concise.

But all this excellent cabin dressing is as nothing compared to the ride quality and noise suppression, which are both now amongst the best in this class. It is a thorough pleasure to cruise in the Stelvio: its drivetrain dies away to a remarkably subdued level, the tyres have no say on cabin compartment noise levels and the wind noise is kept to the barest minimum of discreet background murmurings. Save for the Mercedes GLC (see below), we can't think of any of its rivals that roll along in a more pleasant fashion than the Alfa.

We're still awaiting Irish prices and specs from Alfa Romeo, but we're thinking the 2020MY cars should kick off at the same sort of €53,000 ballpark figure as the pre-remedial models. Quite what the 280hp Veloce will cost here in Ireland is another matter entirely, so we expect this variant to be minority interest, but additional equipment, improved cabin finishing and greater trim grade choice should make the Stelvio 2020MY range even more appealing than ever.

Everything the Alfa Romeo Stelvio 2020MY now does feels shot through with quality. It rides in a serene fashion, its cabin ambience feels up to the level of many of its direct rivals, it still looks the business (especially as the Veloce, the latest addition to the ranks) and its performance and handling are surpassed by nothing else remotely similar that we can think of in this sector. Thus, it's hard not to conclude that the superb upgrade programme Alfa has carried out here is not just worthwhile, it was absolutely essential. And this latest Stelvio deserves to win plenty of conquest sales off the back of it as a result.

Audi Q5 2.0 TDI quattro (2018) review
Audi Q5 vs. Alfa Romeo Stelvio Veloce (2020): the Audi's cabin still knocks spots off the Alfa's, but the German SUV's chassis is like heavy, stodgy porridge in comparison to the spicy, delicate and delicious confection that is the Stelvio. 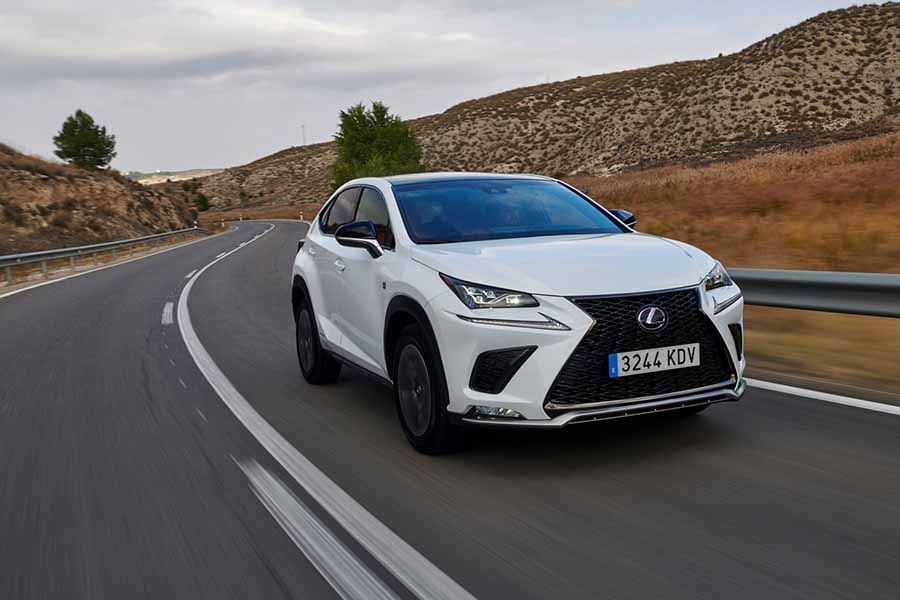 Lexus NX 300h review
Lexus NX vs. Alfa Romeo Stelvio Veloce (2020): has the distinction of being hybrid-powered, looking like nothing else in this segment and being solidly put-together. And that's about it for the NX - the Alfa is preferable in every key regard. 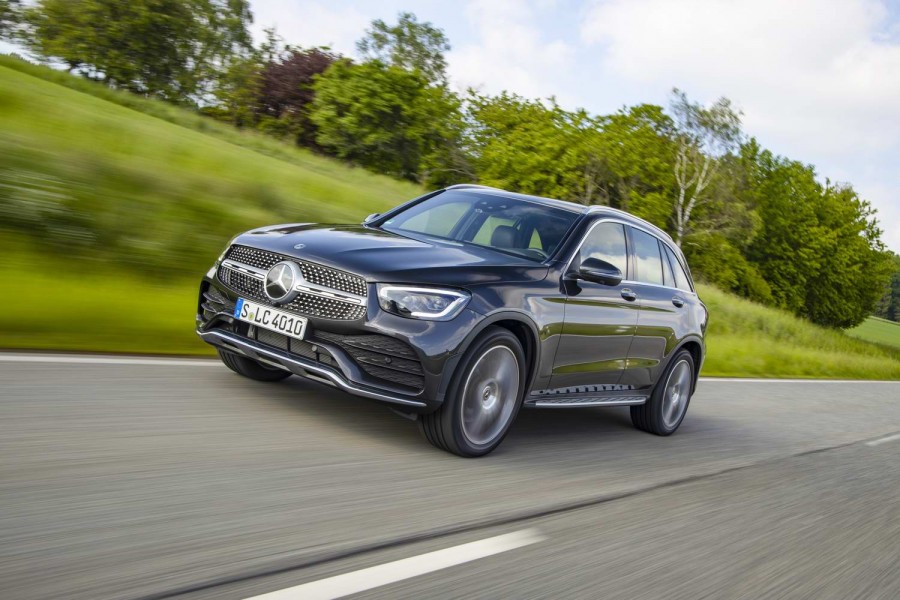 Mercedes-Benz GLC 300 d diesel (2020) review
Mercedes GLC vs. Alfa Romeo Stelvio Veloce (2020): one of the best things in this class, with lovely, refined manners and an interior that puts even the updated Stelvio's in the shade. However, the Merc doesn't drive with the Alfa's verve.