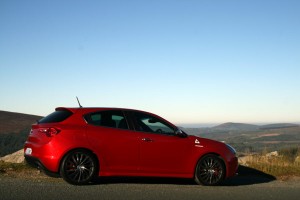 If the stylish new Giulietta is the overdue replacement for the Alfa Romeo 147, then the Cloverleaf hot hatch must be the successor to the barmy 147 GTA, right? Hopefully with a tad less understeer...

Clasp your eyes on the deep burgundy paintwork of our test car and we'll understand if you're ready to reach for the cheque book; this is a spectacularly good looking car. The gorgeous dark alloys fill the perfectly formed wheelarches and the car sits noticeably lower than the regular Giulietta - itself hardly an ugly duckling. The Cloverleaf body kit is quite restrained, though there's no hiding the huge badges on the front wings. More than one person asked why there were shamrocks on the car...

The interior looks almost as good as the exterior and it exudes quality like no other Alfa Romeo cabin. The shape of the dashboard is highly distinctive too and it all works well. We particularly like the modern take on toggle switches and as ever the Alfa Romeo embossed leather is a joy.

So why only 9/10? Two things: first up, the rear seats, while commodious enough, are a little claustrophobic due to the black colour scheme and the sloping shape of the side glass. This can be alleviated by paying extra for the double panoramic sunroof. The other niggle is with the pedals. They are just a little too close together for our liking and there's no room to the left of the clutch for your foot.

Read the spec of the Cloverleaf's engine and you'd assume it has the makings of a very good hot hatch. The company refers to it as a '1750' engine to hark back to some great Alfas of the past. This one is turbocharged, producing 235hp and a rather useful 340Nm of torque. That's less power than its insane GTA ancestor, but more torque. While not quite as fast in a straight line as that V6-engined car, the Giulietta Cloverleaf beats the Golf GTI and equals the outgoing Ford Focus ST. The gearshift is good, if not particularly memorable.

So why only 8/10? It's to do with the power delivery. In pure scientific terms the Cloverleaf's engine performs brilliantly, with linear response throughout the rev range. However, that same linearity is its downfall, as it detracts from the excitement. It's not slow, but it doesn't raise your heart rate quite as much as the best hot hatches manage.

The Giulietta is up against it in this category, as the cars it has to stand up to comparison with are the aforementioned Golf GTI and Focus ST, both of which are massively engaging hot hatches, yet not so uncomfortable that you're on first name terms with your chiropractor's receptionist.

They'll be disappointed not to see buyers of the Cloverleaf more often as it's surprisingly supple. Hence it's actually very good at just being a stylish family car. Leave the 'DNA' switch in N for Normal and it's docile and easy to park too. Push the toggle forward to D for Dynamic and the throttle map changes, the torque curve beefs up substantially and the steering weights up. This is the only way to tackle your favourite road.

While the Giulietta is definitely competent, it's not quite as engaging as its adversaries. In a week with the car I didn't learn to trust it at the limit as much as the others, despite an obviously stiff body structure. The electronic safety nets, while laudable, are a little too keen to step in, even when in Dynamic mode, so all too often the hazard lights flash when you're braking hard on a challenging road. It's as if Alfa Romeo didn't want you to drive the car in such a manner.

Alfa has priced the Giulietta Cloverleaf well in Ireland. At €33,995 it undercuts the Golf GTI, while being a little more than the less desirable Skoda Octavia RS. Neither the Mazda3 MPS nor the Ford Focus ST appear to be on Irish price lists right now, though the latter is due to be replaced by an all-new model in 2012.

The Alfa is generously equipped as standard, with the specification including lovely black leather with red stitching throughout, 18-inch alloys (though not the items pictured with dark titanium finish), Blue & Me Bluetooth connectivity, steering wheel controls for the stereo, dual-zone climate control, cruise control, electric windows all-round and loads of safety equipment. Pity that black is the only 'free' paint colour.

Hot hatch buyers may not have economy at the top of their list of priorities, but for the record, the Cloverleaf's combined cycle consumption is quoted at 7.6 litres/100km (37.2mpg) and its 177g/km CO2 emissions attract an annual tax bill of €630. We averaged about 12 litres/100km...

As a car nut, it's difficult not to love a car as beautiful as the Alfa Romeo Giulietta. In Cloverleaf guise it's even more beguiling and most blemishes would be forgivable. But that's just it: this car has few flaws. In return it may not have quite as much character as its illustrious predecessor, but it's a far better all-rounder. And it's unlikely to understeer off the island.