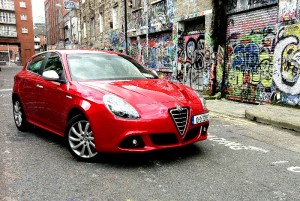 I had been really looking forward to getting my hands on the Giulietta because it was one of those cars that had divided the opinion of a few of my colleagues. Some had said that it was really impressive and the best Alfa Romeo for ages, while others were pretty lukewarm about it. If you are a petrol head you always find yourself rooting for Alfa Romeo anyway, so the prospect of them making a mainstream rival to the Ford Focus and Volkswagen Golf, massive sellers in Ireland has certainly sparked the interest of lots of fans. The difficulty is that the Alfa fans seldom turn into customers. Alfa Romeo have just 0.15 percent market share and this is despite their new MiTo being well-established in the market and the brilliant 159 is virtually ignored by executive and fleet buyers.

Even if you didn't know a lot about Alfa Romeo or this new Giulietta, Alfa Romeo can always trade on their car's good looks and this new model makes the more mundane mainstream rivals seem very dull. The car looks much better proportioned than the MiTo and we see a return to the hidden rear door handle feature which we first saw back with the 156 and this once again has the effect of making the car look like a coupe. This car is longer than a Volkswagen Golf and has similar space. Rear passenger space, which was previously something of a problem in Alfas in now a match for the Golf's and there is a decent size boot (350-litres) with a flat loadspace. The cabin is pretty, with a definite step up in quality from before on most areas but there are still touches of lower end models from the group on show (steering wheel switches, glove box) and I'm not entirely sure about the row of switches below the central control panel. Our test car was fitted with some nice optional extras, such as that gorgeous paint and sports leather seats and although the alloys fitted wouldn't be our first choice this was a seriously handsome car in the metal.

We were off the airport again and it was fun to spot just how much attention the Giulietta was getting. You simply wouldn't get this from a rival unless it was perhaps a Ford Focus RS. Even the ubiquitous Golf GTI would not get so many looks. We spoke this week to a few people who were keen on this car and most are bypassing the basic one and going to higher spec models even though the entry-level car is quite well appointed. There are four Giulietta trims. Entry-level Turismo cars come with air-conditioning, front and rear electric windows and an engine stop-start system, but you need to upgrade to the Lusso spec to get alloy wheels, steering wheel-mounted stereo controls and Bluetooth. Veloce models brings sports suspension and sportier trim, while the flagship Cloverleaf has an even sportier suspension set-up and a host of cosmetic upgrades. There is a decent range of engines, all of which are turbocharged, with all models offering decent performance. Petrol fans can choose from 1.4s with either 120bhp or 170bhp, or a 235bhp 1.7 that's is right up there with the most potent hot hatches. The diesels, meanwhile, are a 105bhp 1.6 and a 170bhp 2.0, but the smaller engine is so good you probably won't need the larger unit. We really liked the 170hp petrol, it just suited the car really well.

Right, I have been away for a few days and I hadn't had a chance to give the Giulietta a proper spin and having done that I have to say I like it. I am not sure still about the Alfa 'DNA' switch – the button that allows you to adjust the dampers, differential settings and throttle responses. In 'dynamic' mode it feels pin sharp and I found myself leaving it there most of the time, aside from town driving where the throttle felt a little too responsive and jerky. There is a great feel from the steering and while the ride is certainly on the firm side it is not overly rigid.

A quick blast up the motorway to Northern Ireland and there still hasn't been a sign of a fuel light yet which shows that this petrol engine is pretty frugal too, after a busy enough week. I must say I like this car a lot. The difficulty is that I like this €31,195 one a lot. I'd like to see a €19,995 120hp model to see how it compares but having said that there isn't going to be a large price walk to get into a good spec model. We've yet to spend any great length of time in the diesel models (which we will) and after that we can give a proper verdict, but the signs are good. I'd certainly have this over most Ford Focus, VW Golfs and Opel Astras because it is interesting, which is something that you can't really say about the others. We are pretty sure that is will behave itself reliability-wise and resale value is probably going to be ok because the market won't be flooded with them initially. So time will tell.