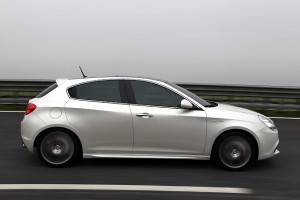 First impressions from the international launch of the Alfa Giulietta.

We don't drive the car until tomorrow, but I had an interesting conversation with one of Alfa's PR people this evening regarding the foundation the Giulietta is built on. Apparently it's an all new platform, which can be readily adjusted for different lengths and widths and it's suitable for use with front- and four-wheel drive. It'll be used extensively by Chrysler too (Fiat, Alfa Romeo's parent, now effectively owns Chrysler).

Alfisti out there will want to know if it has been engineered for rear-wheel drive. Though the answer is officially no, we can't see why a structure that can accommodate four-wheel drive couldn't also manage rear-wheel drive only.

Anyway, our source emphasised the point that the platform could be used for a crossover. So are we finally going to get an Alfa-badged SUV? Or perhaps something along the lines of a stylish Nissan Qashqai rival.

We attend launches at Fiat's proving grounds fairly regularly, but it's still fun to turn up to a line of shiny new cars waiting to be driven. The Giulietta is very eye-catching though the design is quite colour and wheel sensitive, looking its best on larger alloys. Although it'll be a tiny seller on our shores, the high-performance Cloverleaf model draws our attention first. We're only human!

It turns out that we can only test the Cloverleaf on track, while there are two other variants available for driving on the public road. The first is powered by a 1.4-litre turbocharged petrol engine. This punches way above its capacity, thanks in part to the turbo, but also to the inclusion of the company's MultiAir technology. The stats at the bottom of the page speak for themselves.

The other model available to test is a 2.0-litre JTDm turbodiesel producing 170hp. Lovely as this and the MultiAir engines are, the big sellers in Ireland will be a 120hp 1.4-litre petrol unit and a 105hp 1.6-litre turbodiesel. Don't be put off by the latter's relatively low output, as it has plenty of low-rev urge and a handy 114g/km CO2.

Alfa is pretty adamant that the new Giulietta will challenge the VW Golf and Ford Focus and a day behind the wheel suggests that the car deserves to be considered. It's the best-made Alfa we've ever driven and yet there's much more sense of occasion to driving it than either of its rivals.

Twisty mountain roads and motorways were both handled deftly by the car, with the only minor complaint being noticeable wind noise at high speed. Foreign roads never give a true representation of how a car will perform back home, but we reckon the Giulietta will cope well.

The car's dynamics won't be Alfa's stumbling block with this car. Getting people in the door of the showroom is the biggest hurdle. The Giulietta's looks will obviously help that, but so too should what promises to be a generous level of standard equipment.

Even base Turismo models should come with all of the available safety devices, as Alfa chases the coveted top score in the Euro NCAP crash tests. Other trim levels will be Lusso, Veloce and Cloverleaf.

The official on sale date is July 2010, though it's unlikely that many cars will be delivered before the end of the year. Expect a starting price for the Giulietta 1.4 TB 120hp Turismo of under €23,000, with the 1.6 JTDm 105hp a little more.