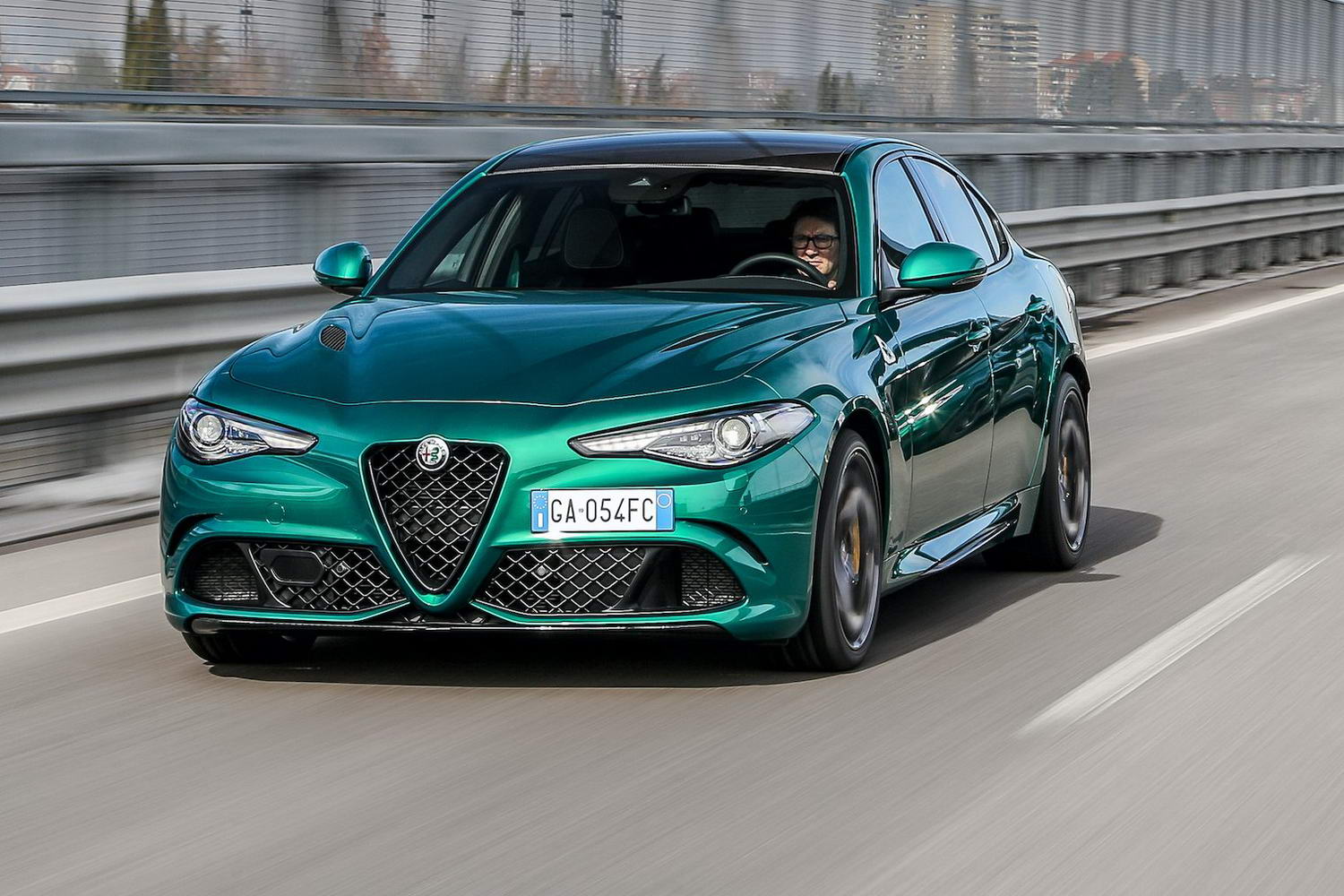 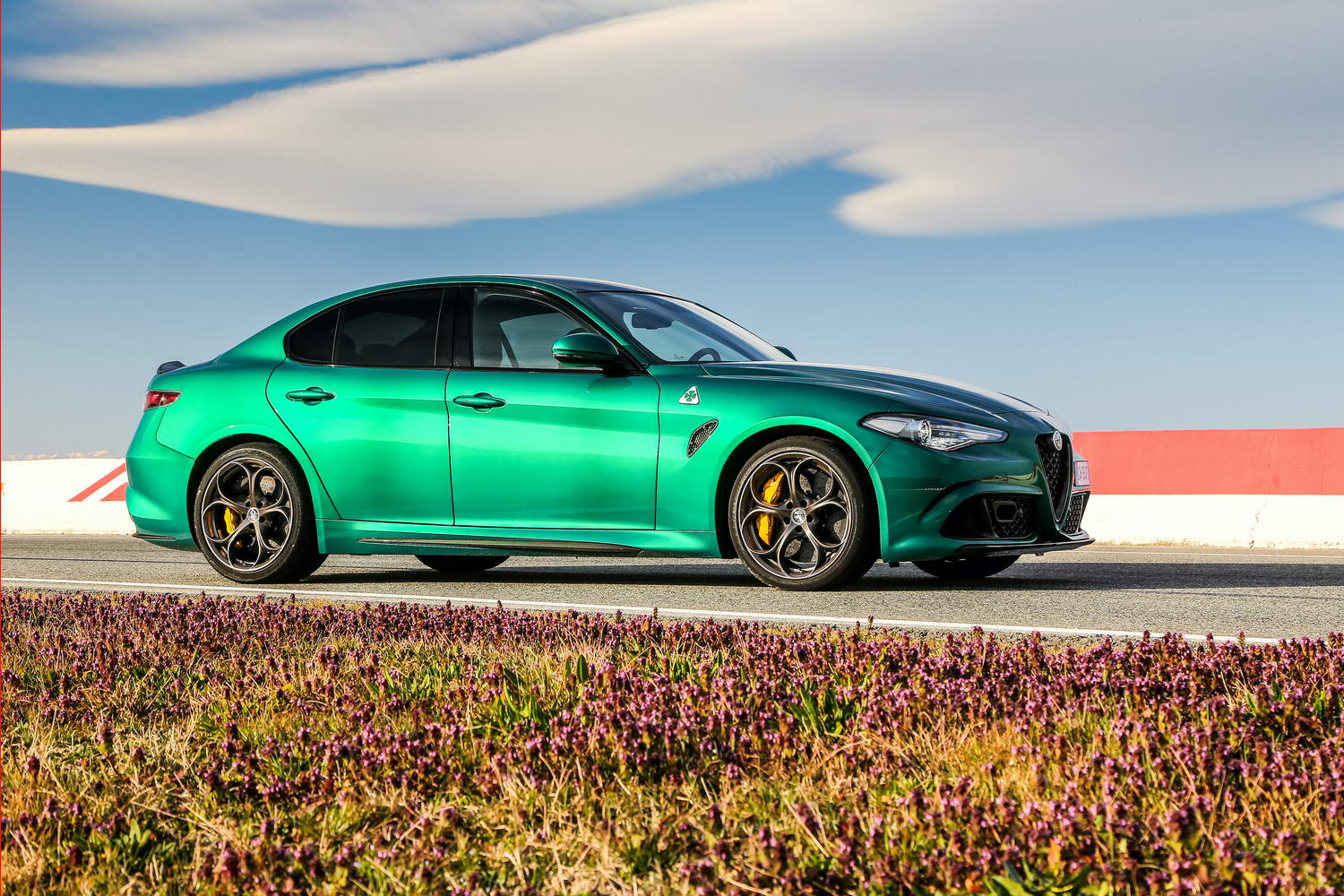 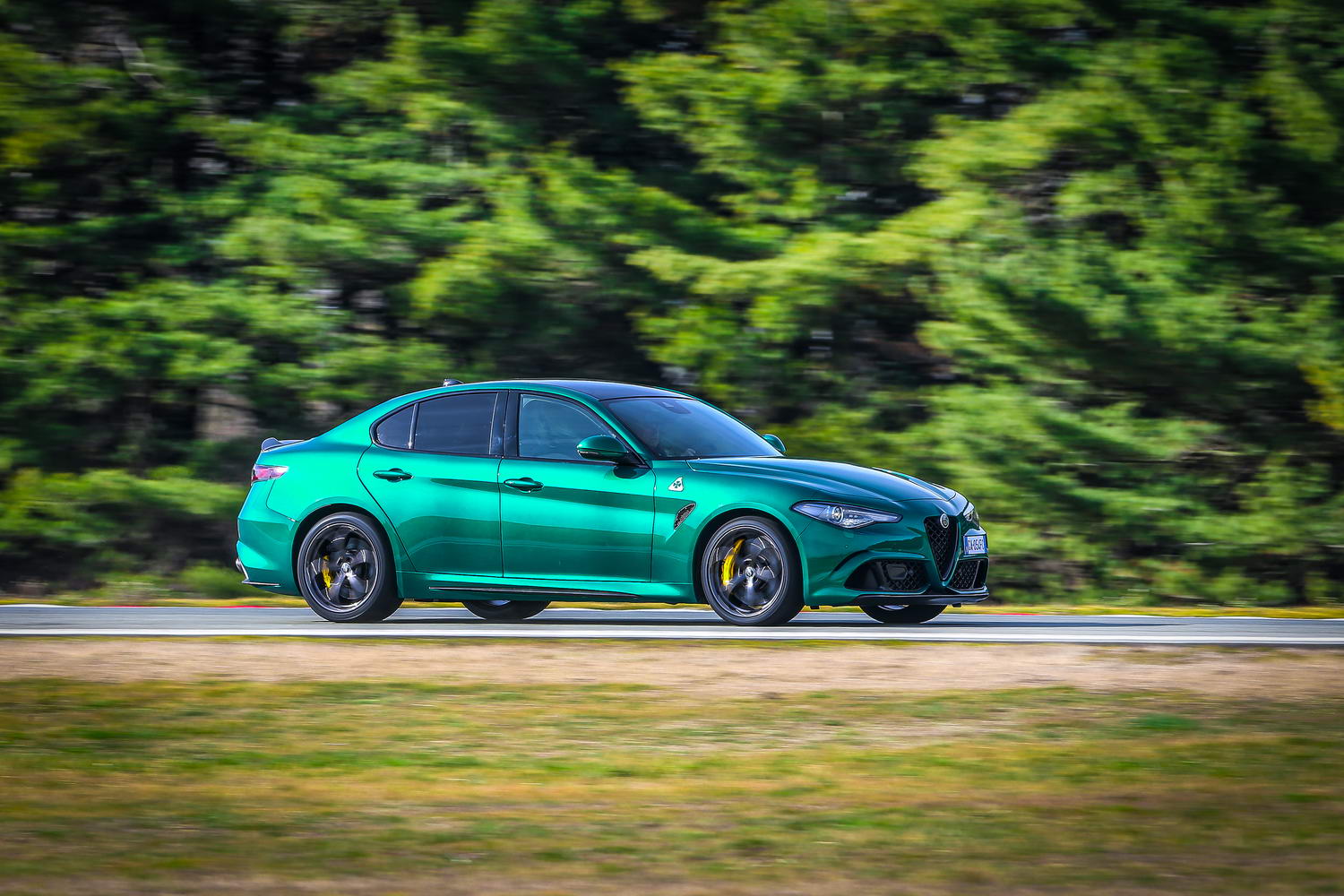 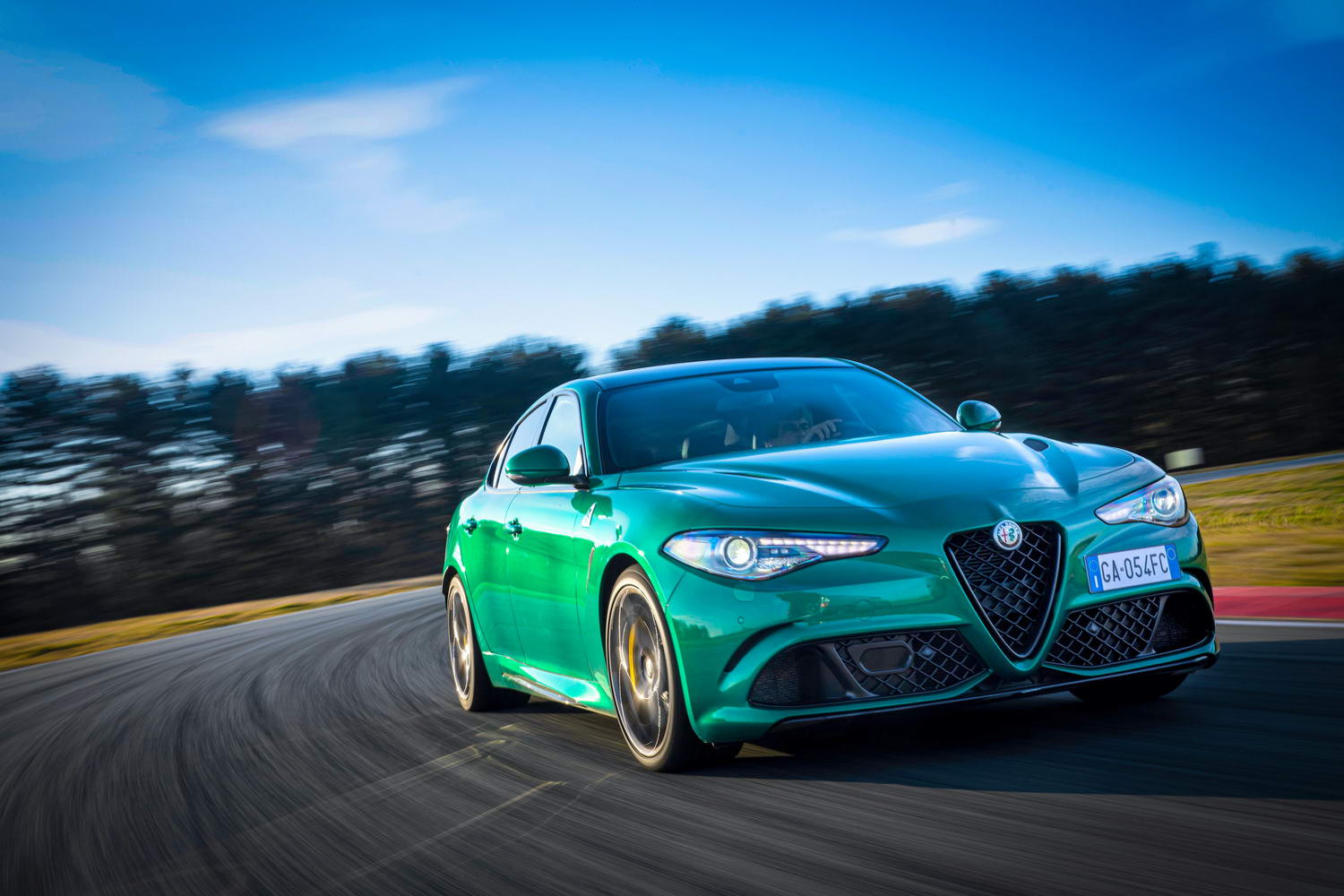 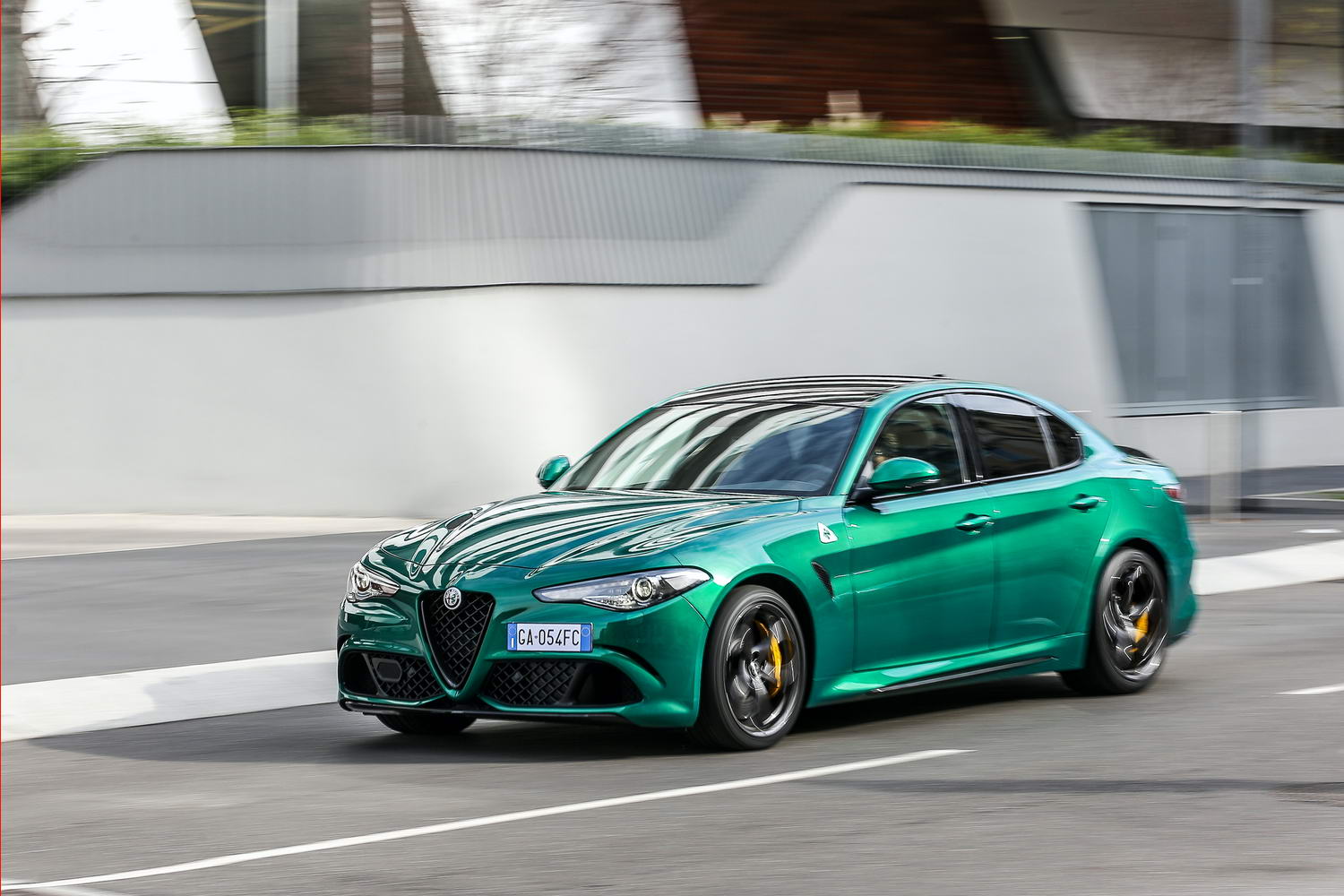 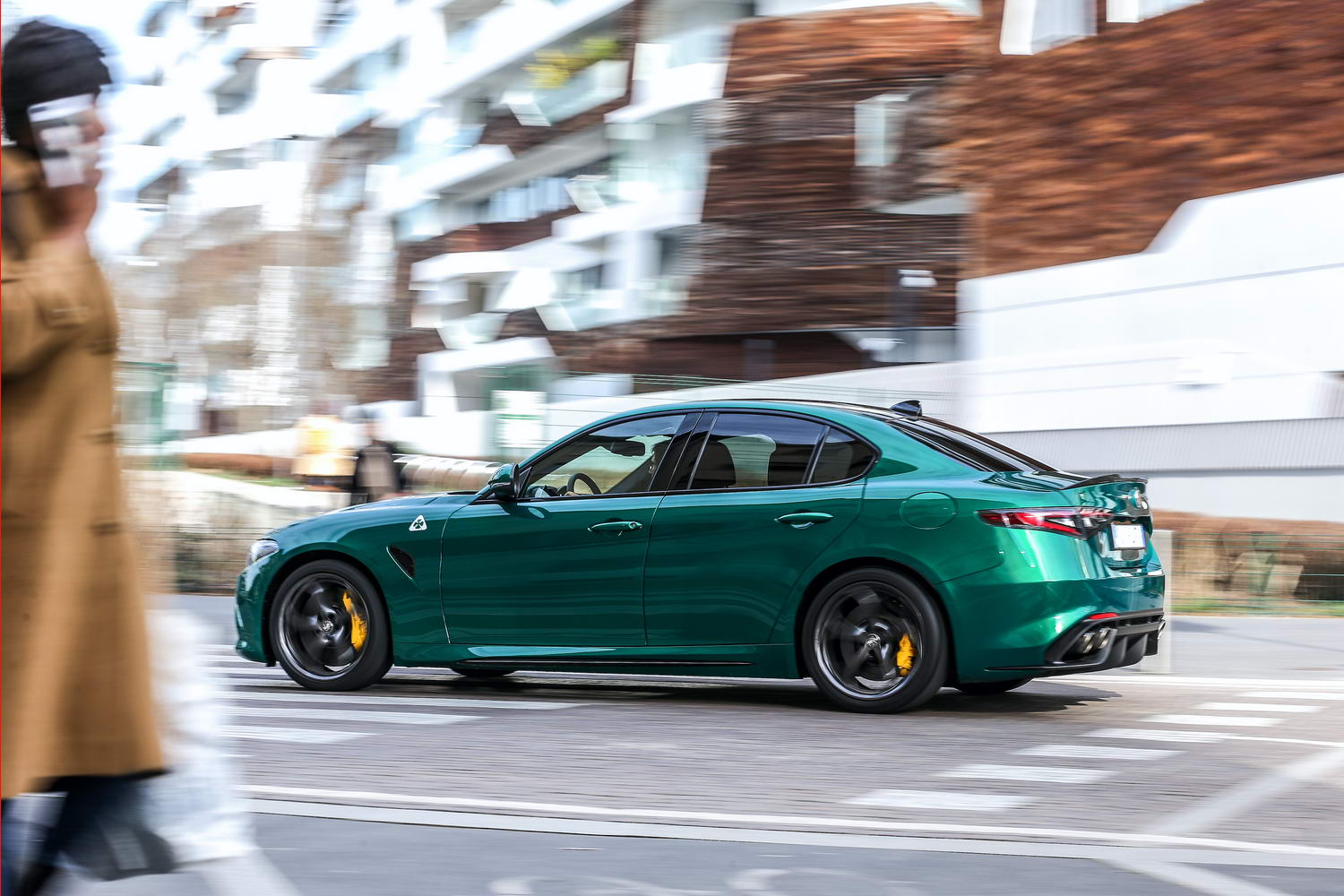 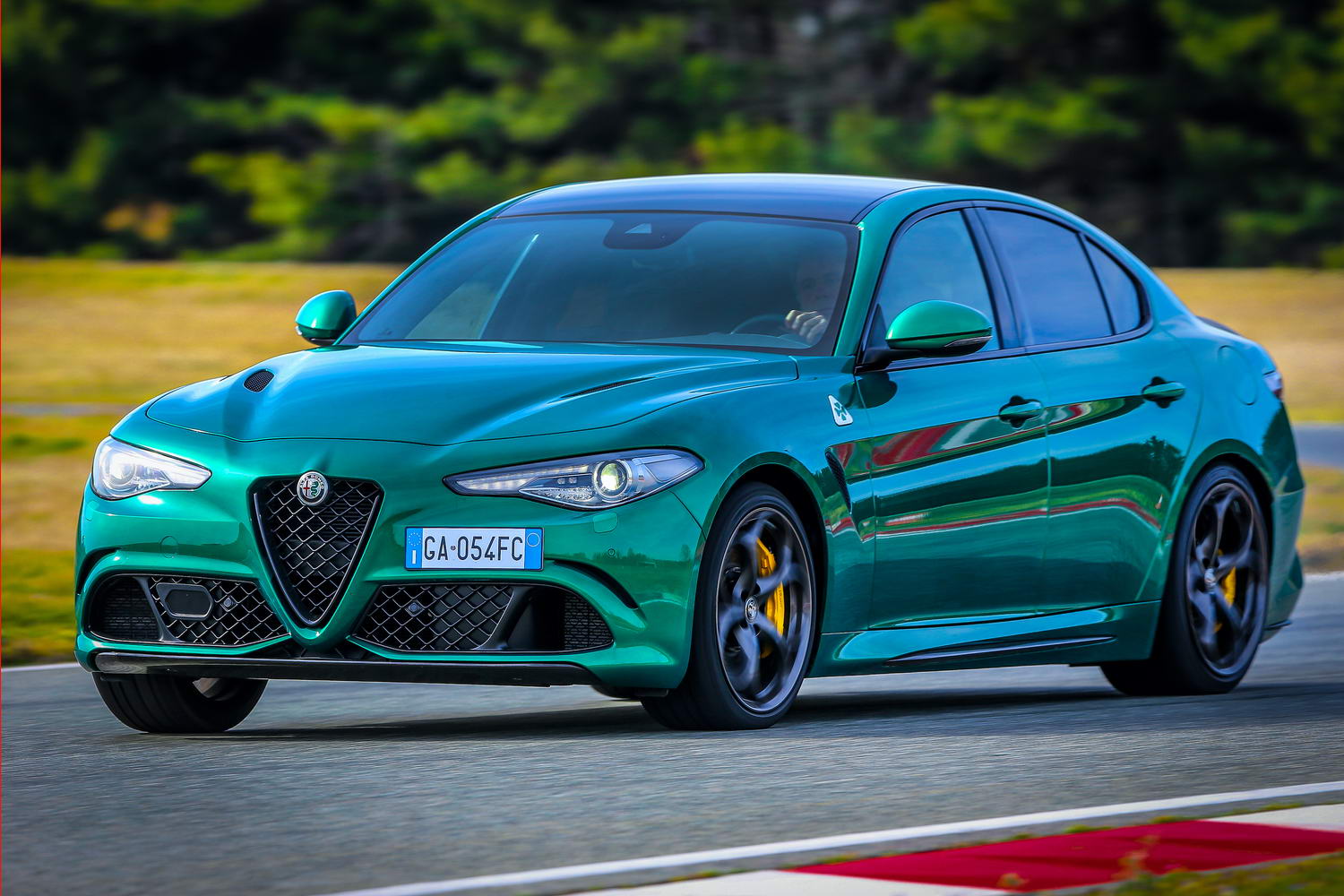 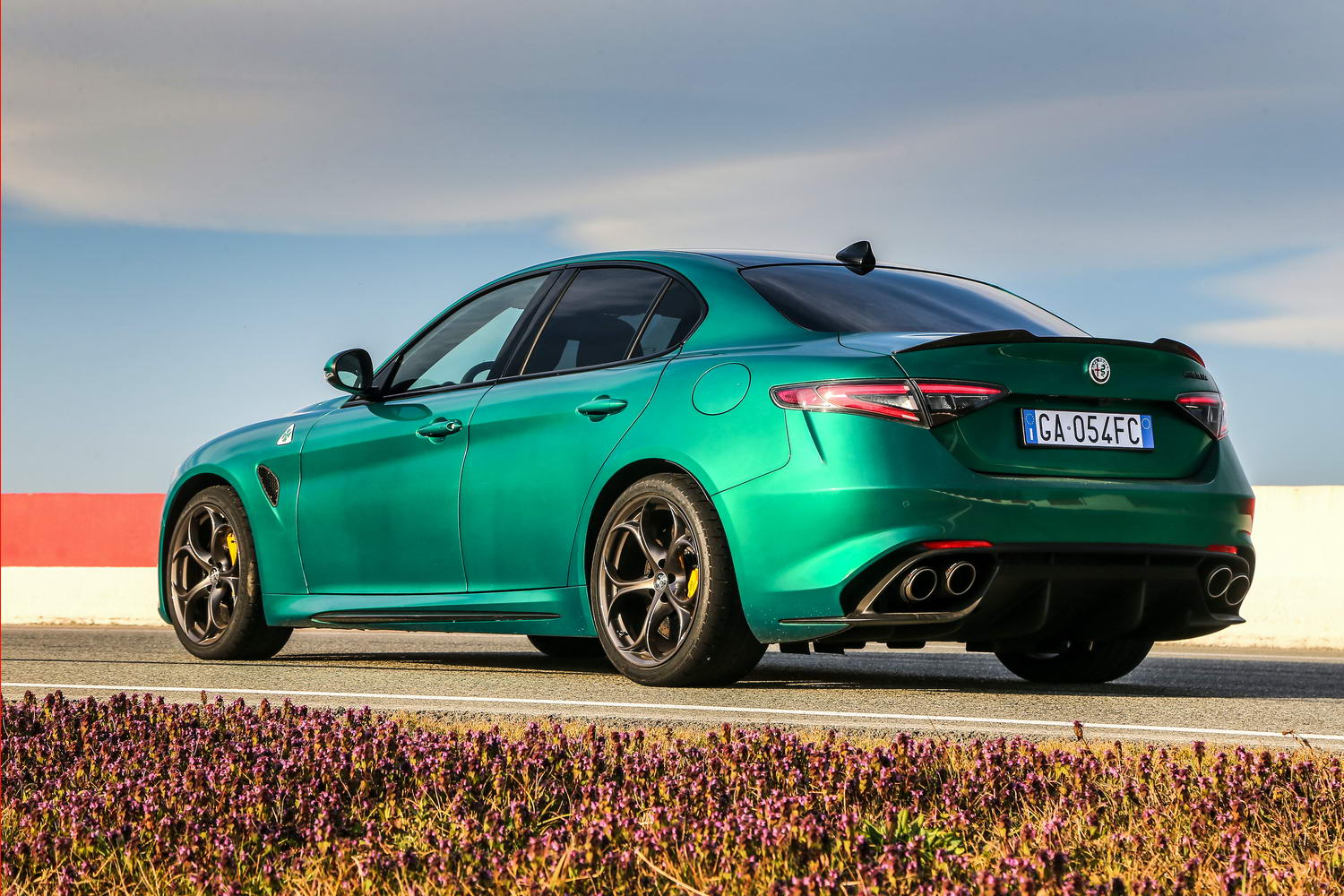 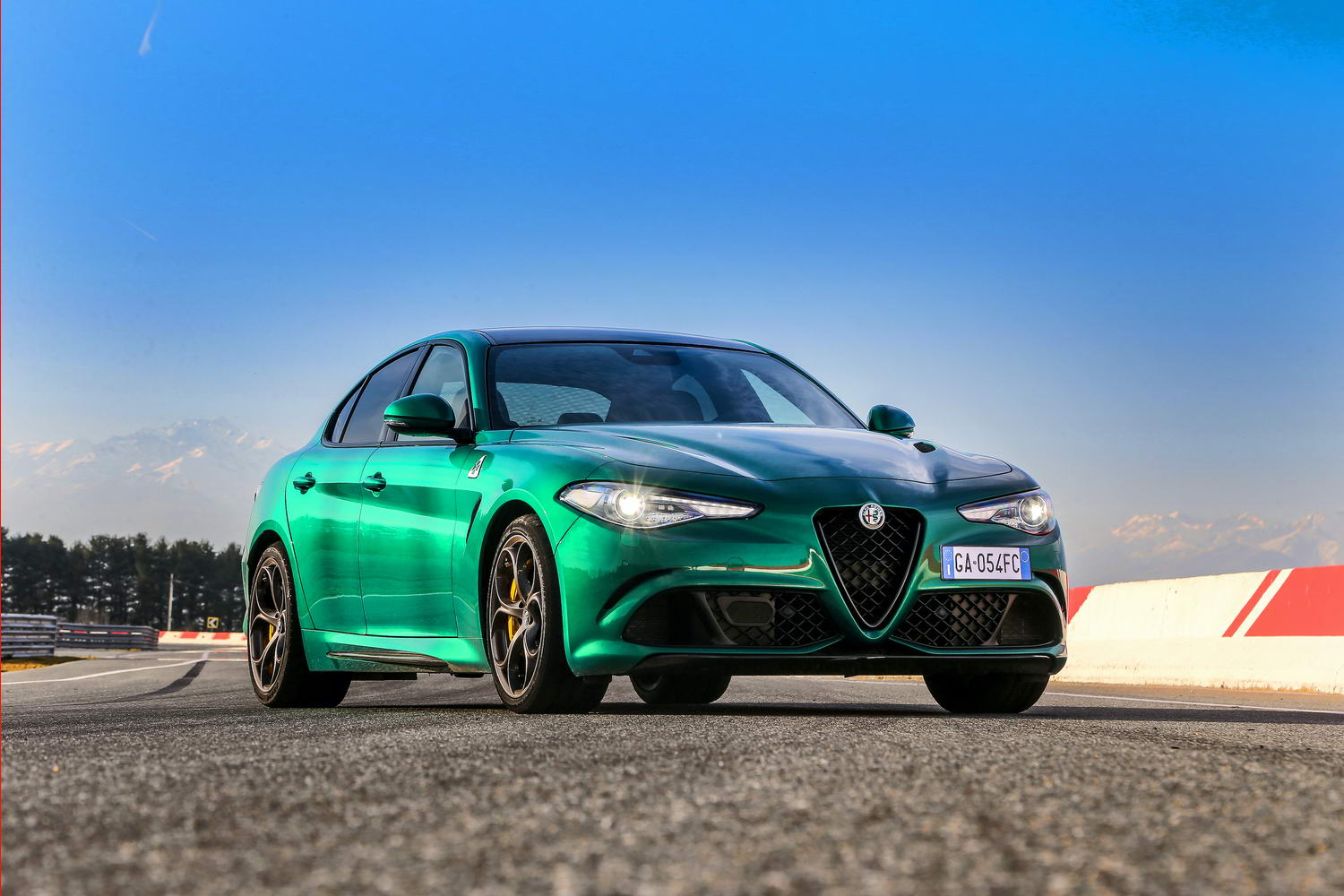 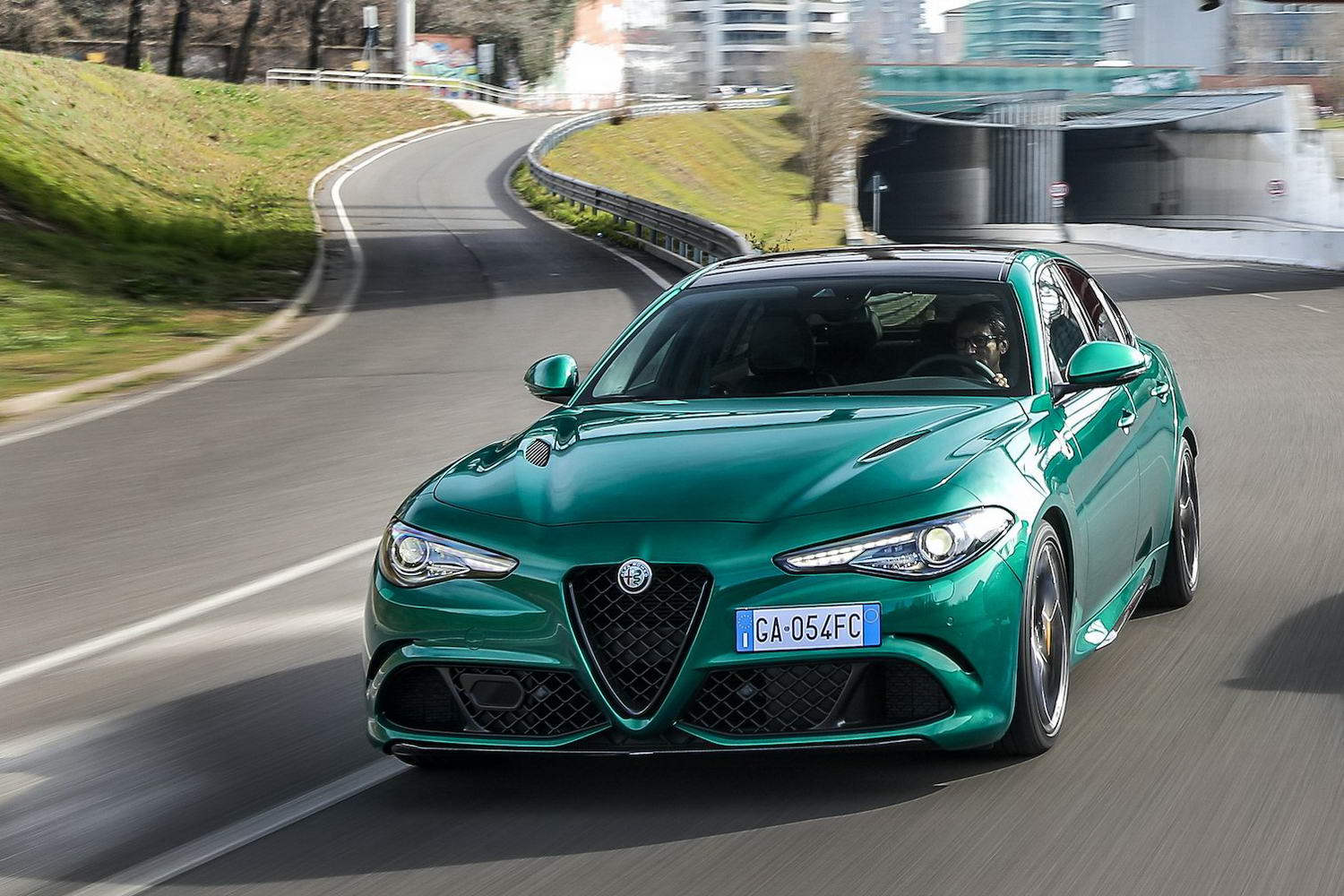 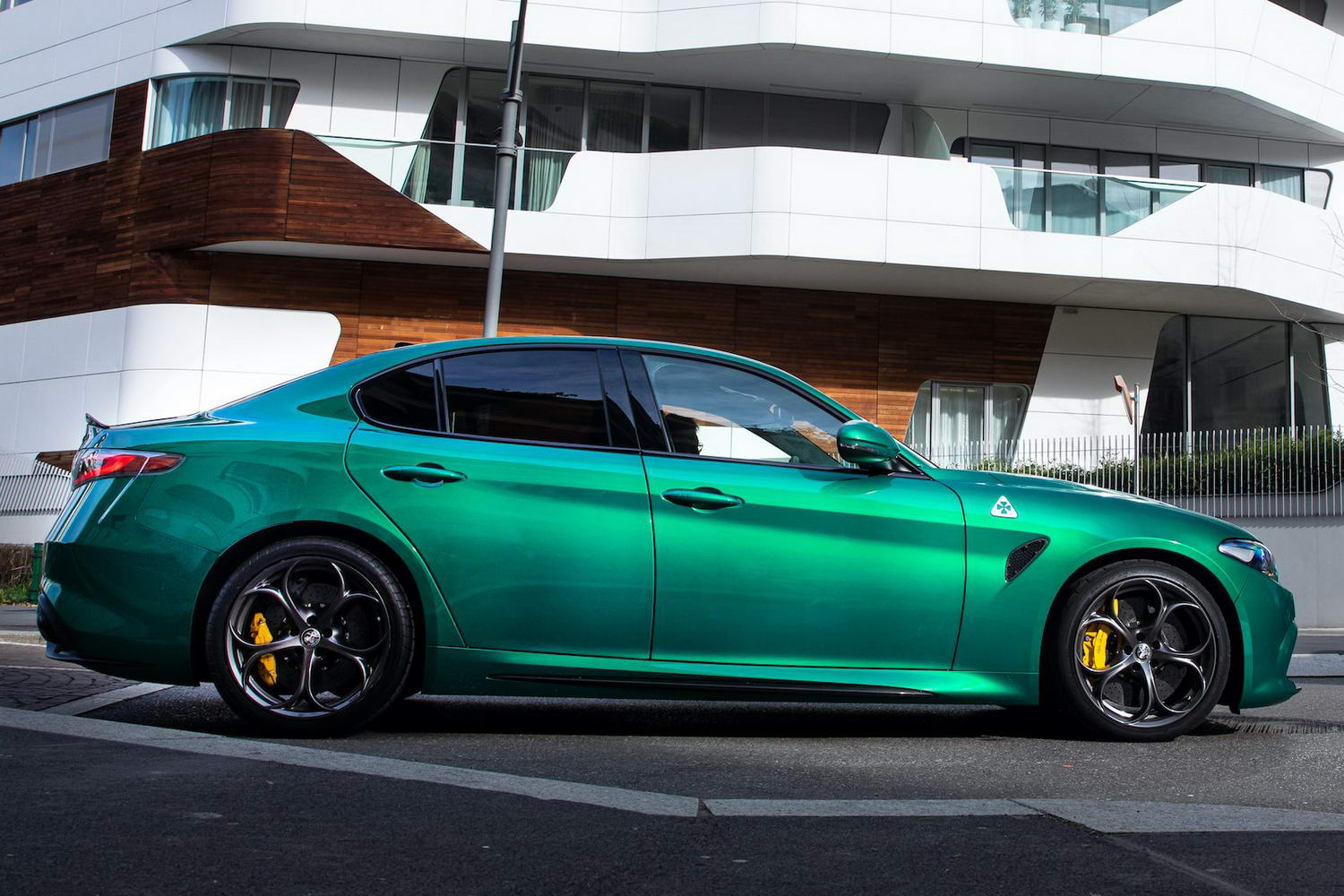 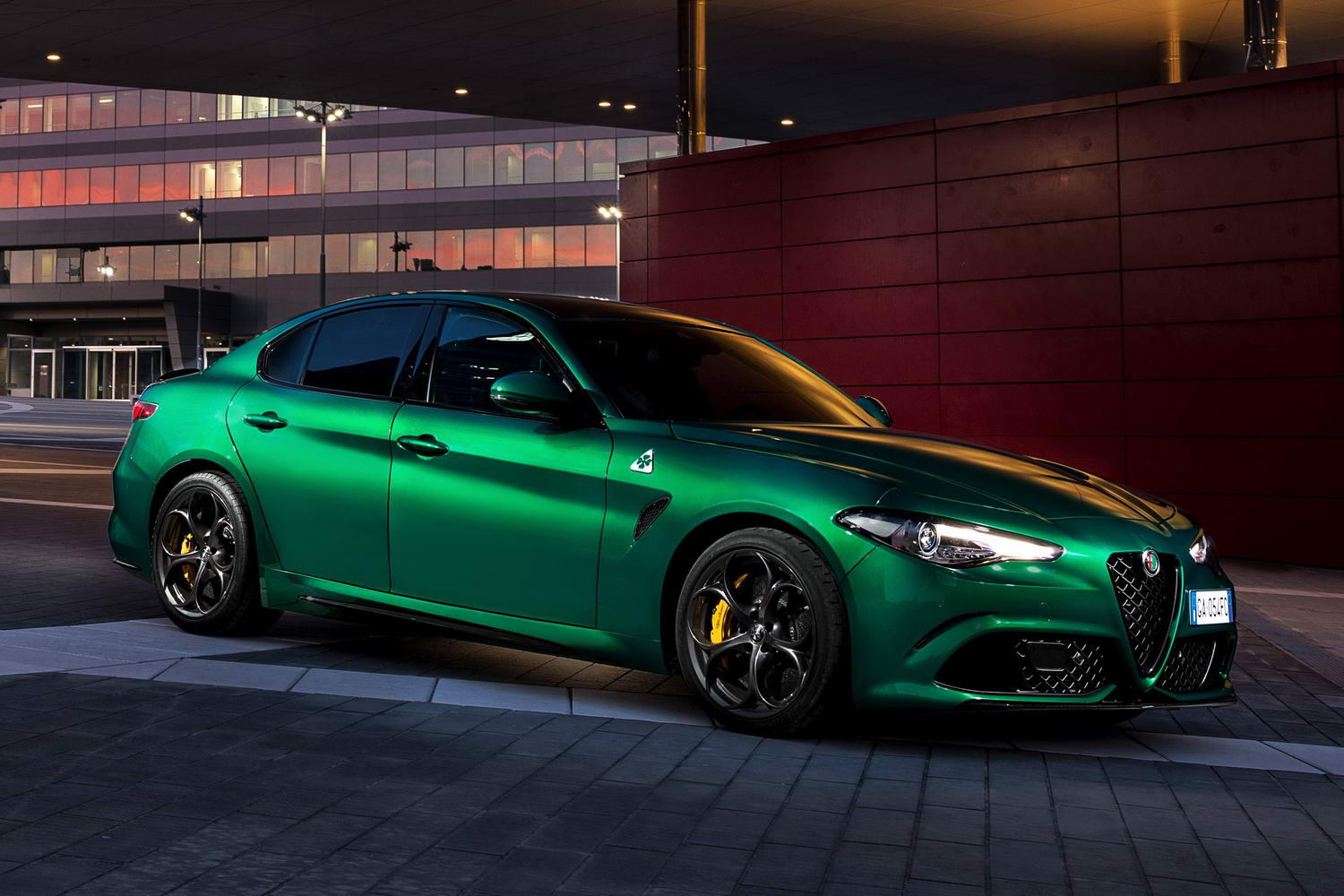 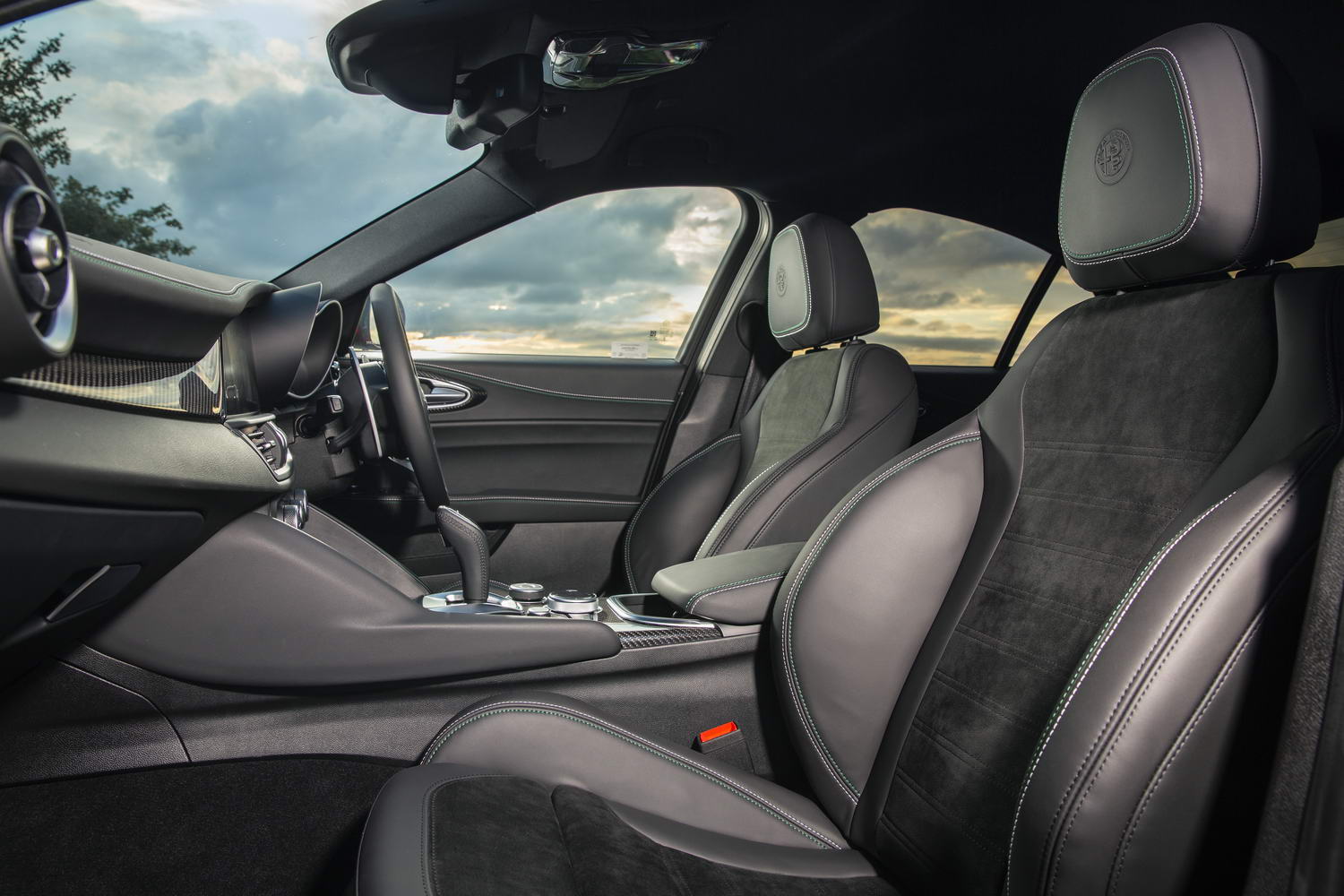 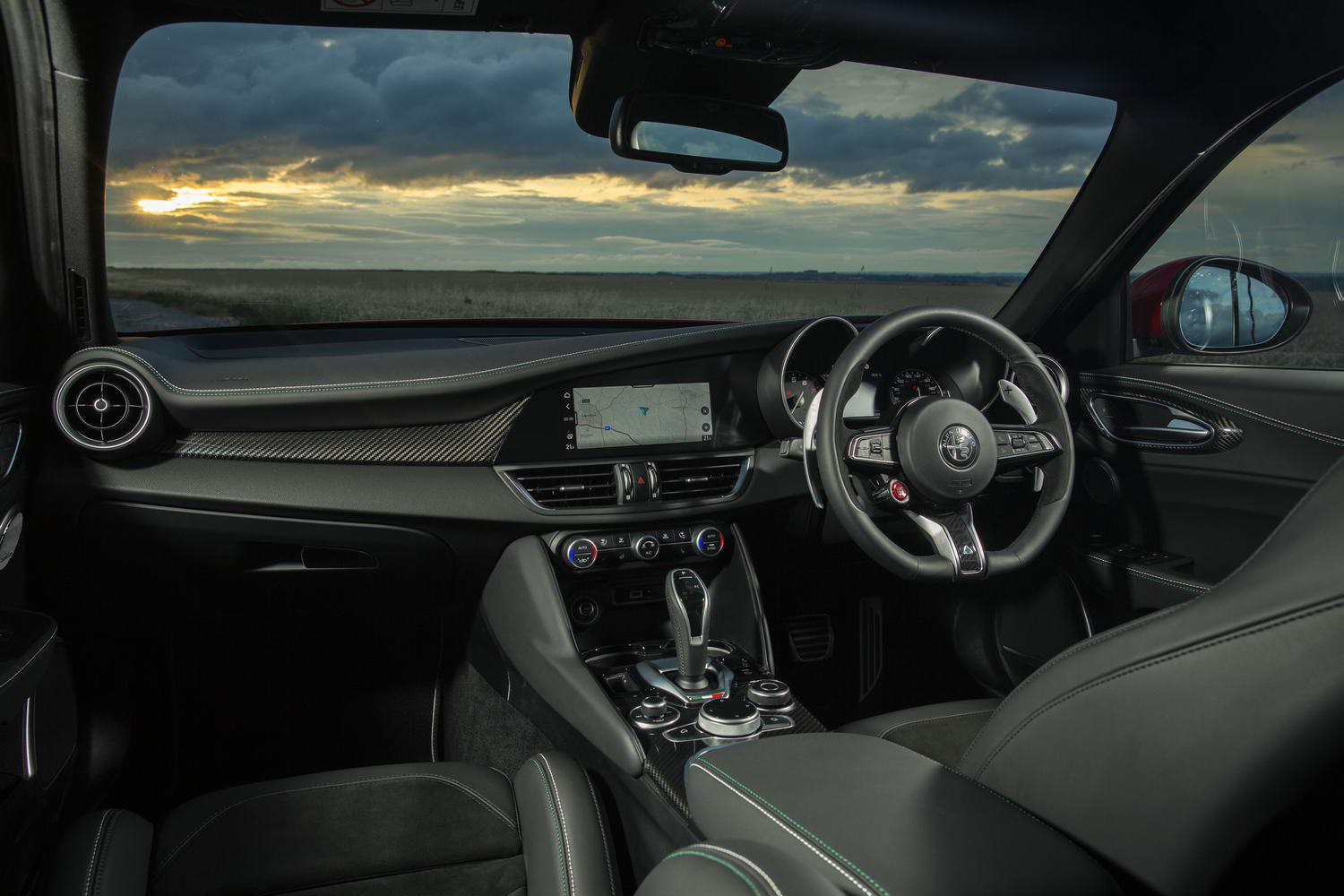 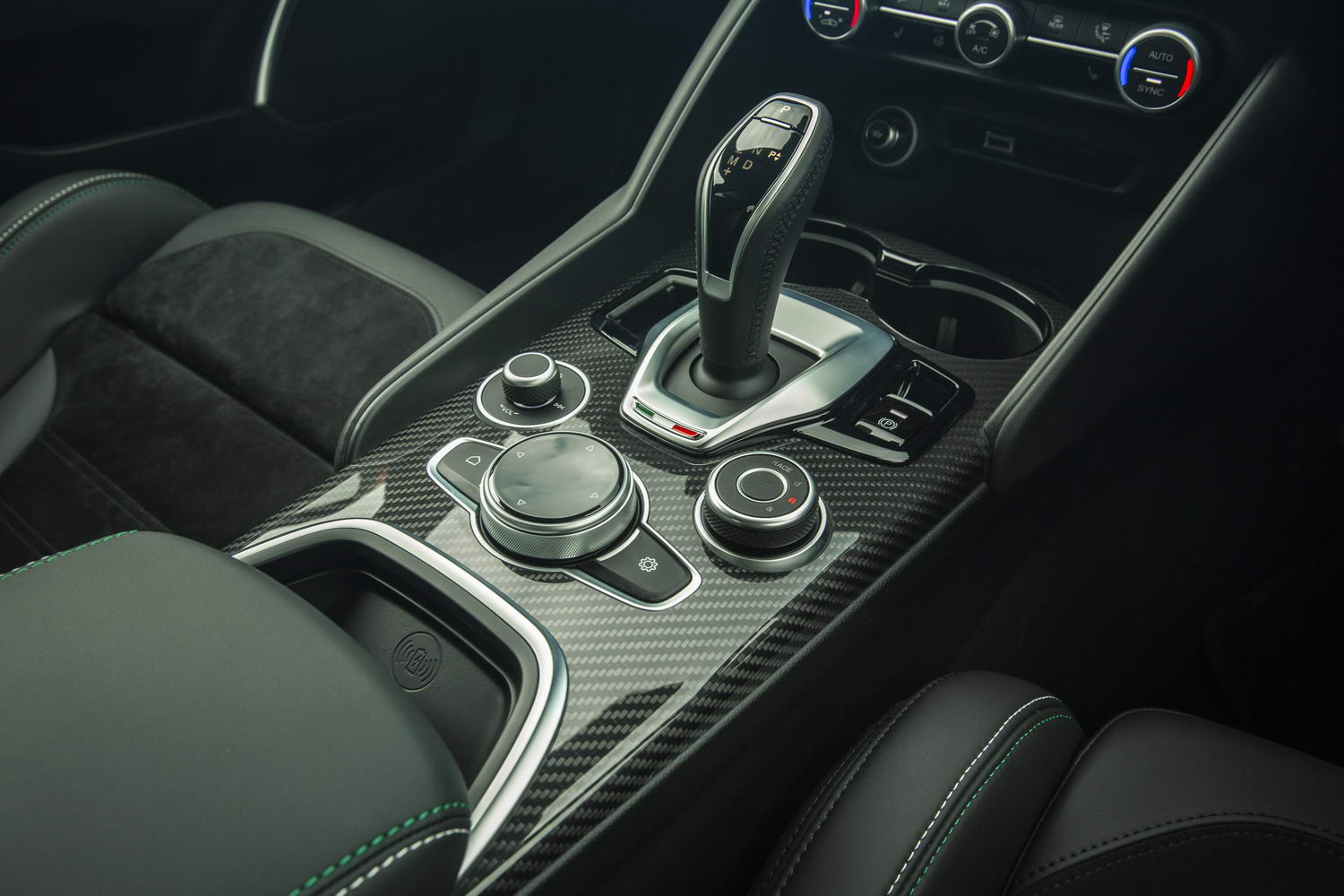 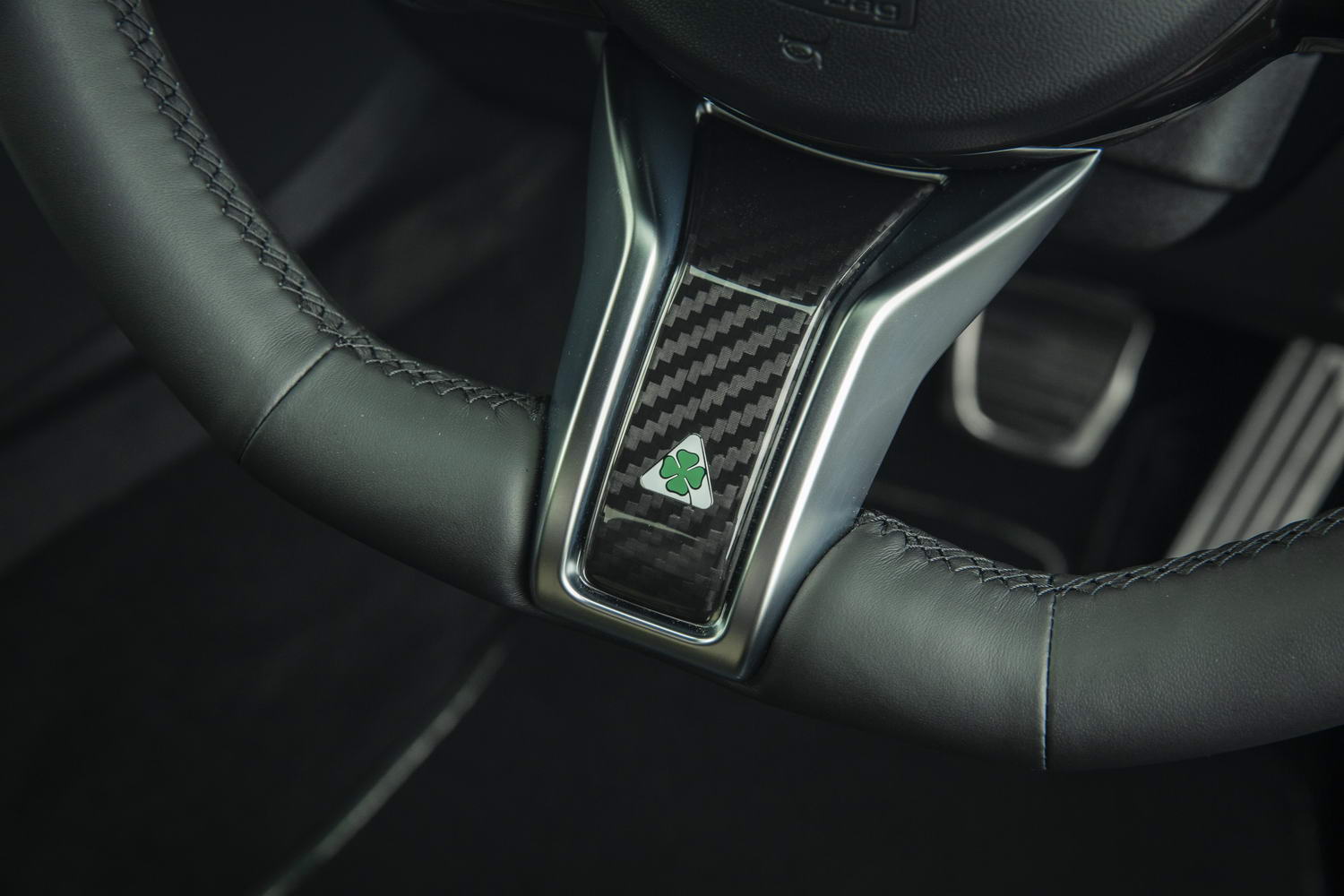 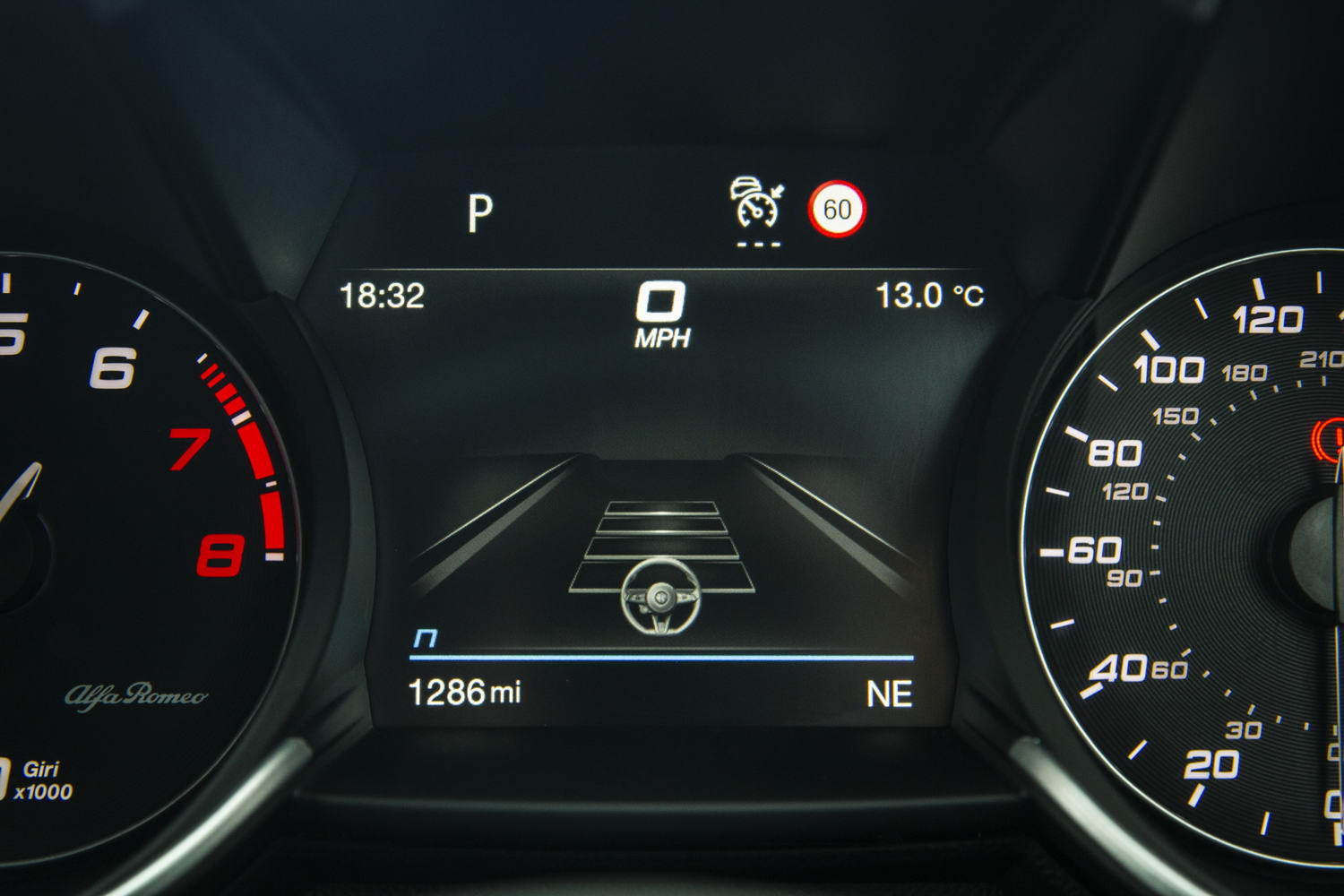 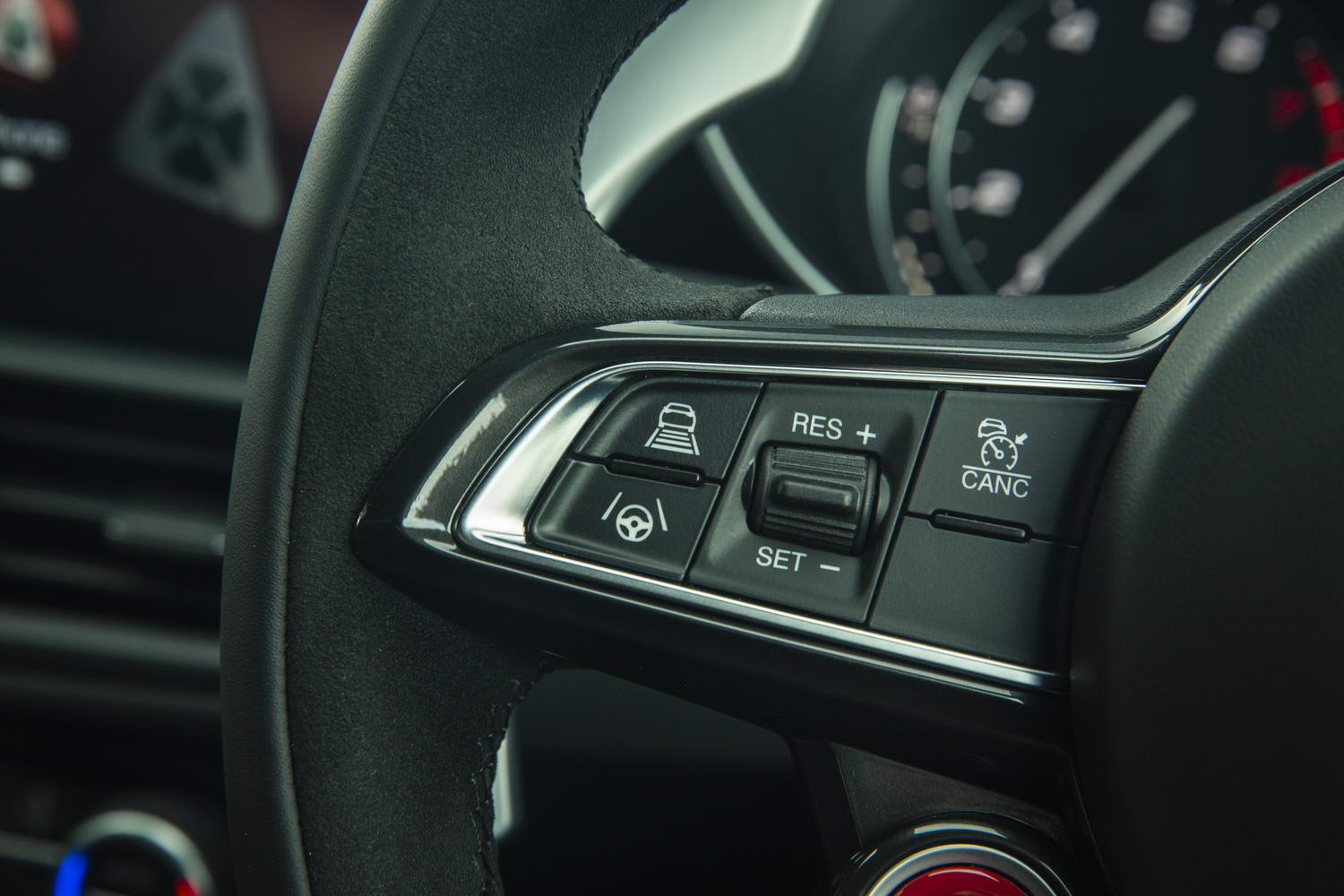 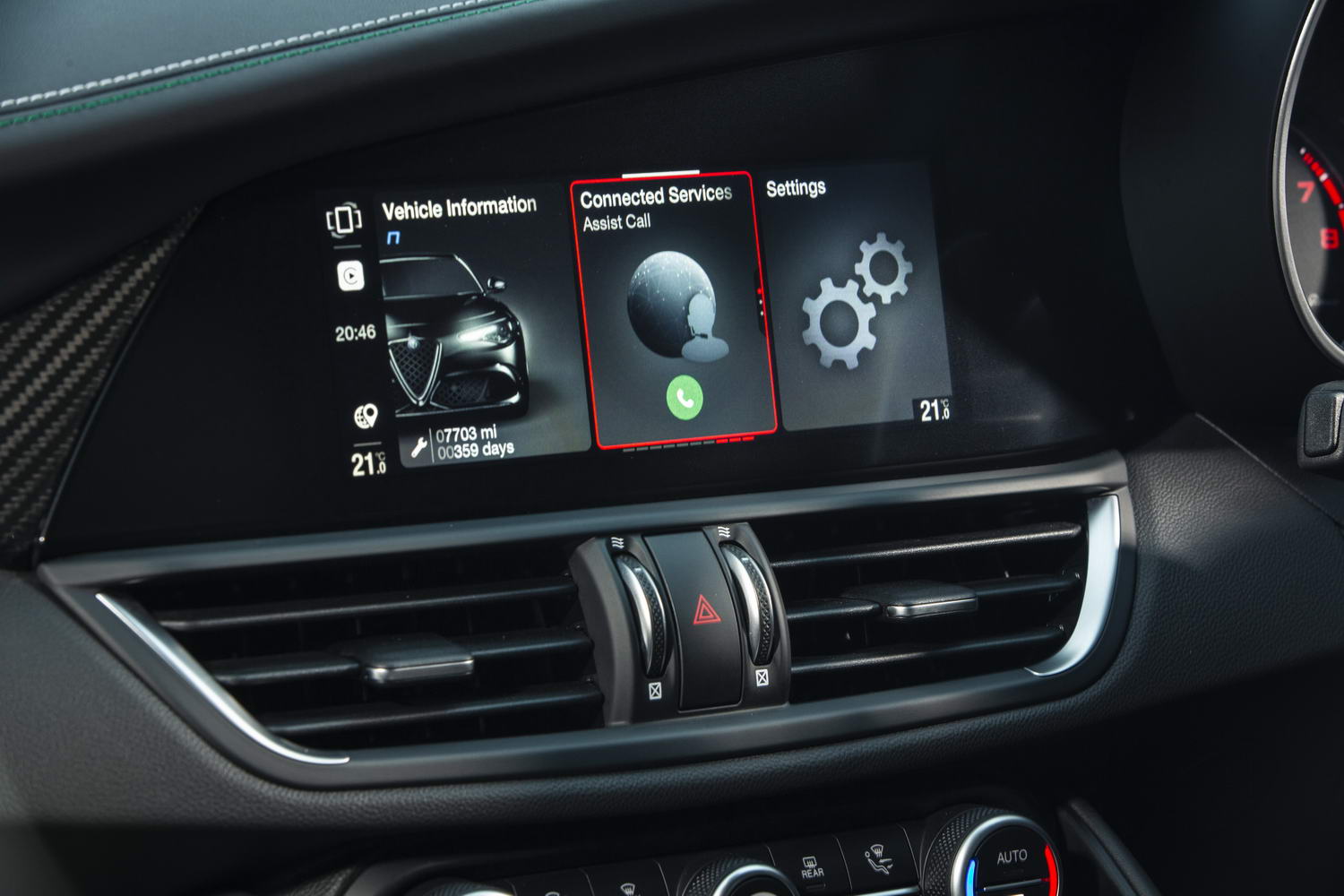 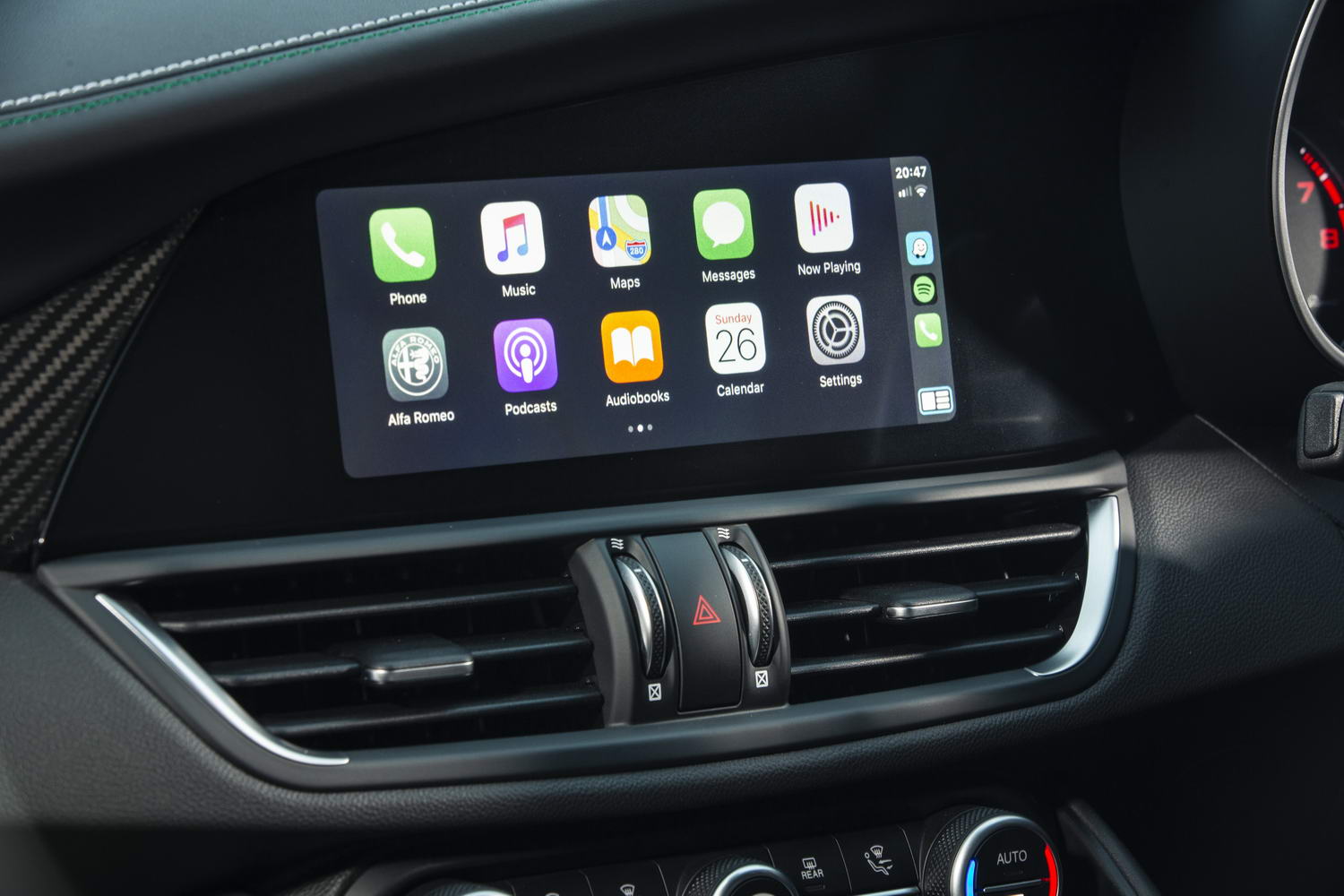 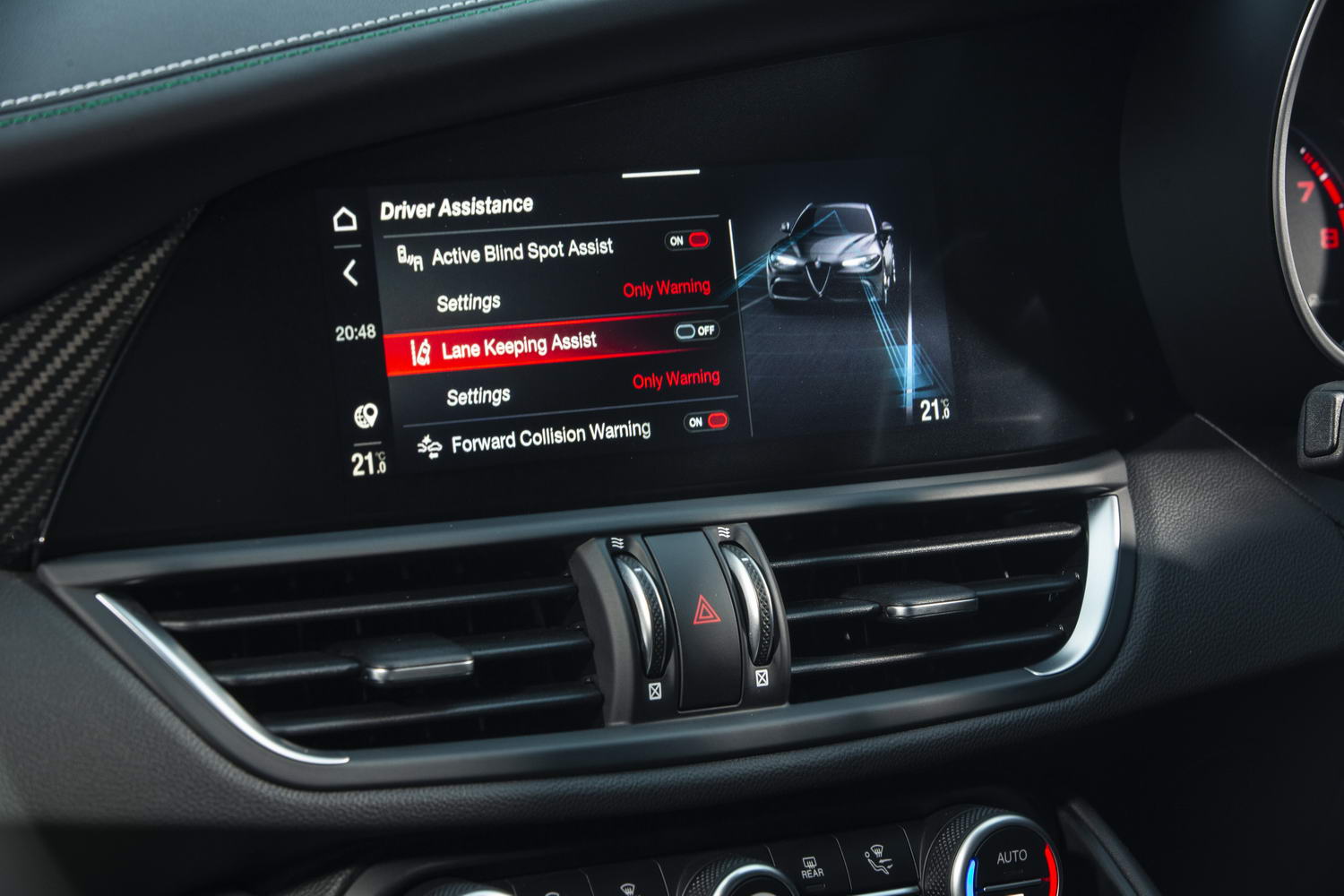 The best supersaloon in the world has the one thing that let it down - its interior - improved.

The greatest Alfa Romeo in decades has just had its one area of weakness, namely its sub-par interior finishing, comprehensively addressed. So what do you think we make of it now? That's right: we're in total awe of the 2020 model year Giulia Quadrifoglio, a four-door supersaloon par excellence.

As Alfa has done nothing to the Giulia's fabulous exterior looks, save for given it dark-tinted LED rear lamp clusters and some other sundry dark grey/gloss black details, we'll not talk about the outside of the car any more - apart from to say there are some new colours available and, of these, Montreal Green ought to be made the only legal selection, as it's a magnificent shade for the Quadrifoglio.

So, to that end, we move straight inside, and this is the one area where the Quadrifoglio always used to fall down. It wasn't that the interior was out-and-out bad - nothing with those exquisite paddle shifts, a steering wheel of perfect diameter and thickness of rim and a driving position so absolutely spot on could ever be accused of that - but there were areas were it was... obvious that the Giulia's interior design team hadn't finished its work as quickly as the chassis development crew, ahead of the car's 2016 launch. Specifically, the Alfa had lacklustre infotainment graphics on the main 8.8-inch screen, a fairly primitive digital display in the cluster, a cheap-feeling rotary dial to control the aforementioned infotainment and (perhaps worst of all) a low-rent plastic gear lever that had been finished so poorly that there was a discernible sharp edge where your trigger finger rested.

However, as with the regular Giulia models for the new model year, which went through the self-same 'change' earlier in 2020, the Quadrifoglio's cabin has been spruced up. We're not about to say it has become class-leading in terms of its overall quality as a result, but you no longer focus on the few negatives, instead revelling in the same positives as before (did we mention the paddle shifts are, like, staggering in both their beauty and their tactility? We did? Oh...) and noticing that, in other areas that you'd maybe not paid attention to before, the Giulia's interior is quite lovely. It has nice sculpting on the dash, for instance, and the materials used are largely superb throughout, and you can still option the jaw-droppingly pretty carbon-shelled Sparco bucket seats if you so wish.

What has specifically changed, then, is that the infotainment has a refreshed home-screen layout, with tiles down the side of the screen for various functions and the use of swipe-able 'widgets' to clean up the rest of the interfaces. It's also touch-responsive now and it packs some 'Performance Pages' that are specific to the Quadrifoglio model, while the penny-store rotary dial on the transmission tunnel has been upgraded to one that is still a long way off an Audi MMI controller or the BMW iDrive disc, but which nevertheless no longer feels like it is going to break off in your hands at any moment. On a digital theme, the seven-inch TFT in the instrument cluster is much better presented and relays more information to the driver, while there are cupholders, a revised layout and even a wireless smartphone charging pad all incorporated into the centre console area. Both the steering wheel and the gear lever are leather-clad for the update and, while the wheel isn't quite as terrifically slender as it once was, it still feels great in your hands - and the gear lever is something like one thousand per cent better to operate. That's an official metric that you can quote to your friends, by the way.

Right, so we've established that the cabin is now ten out of ten in some areas and eight out of ten in others, whereas it could slip as low as four or five previously, and you're still looking at a glorious supersaloon shape on the outside. What has changed mechanically for the Giulia Quadrifoglio? Erm, nothing.

Actually, there is one alteration to the physical make-up of the Alfa and it's sound deadening. Like the other Giulias, the Quadrifoglio has a bit more of the stuff in key areas now, but fret not - the Italian hasn't piled on the pounds in a carb-fuelled frenzy of gluttony. Instead, it's just a touch more refined and quieter on a cruise than it was before, and as you're sitting in a better environment and operating things in the car that feel more substantial and classier, the whole impression of the new Quadrifoglio is that it's a thoroughly upmarket machine. Little changes all add up to a big whole, you see.

Beyond that, everything that was so mesmeric about the Alfa Romeo's dynamics before its midlife update is retained. This remains a gem of a performance car, with a stupidly charismatic engine, rabid performance all around the rev counter, an eight-speed gearbox that is never caught napping no matter what you need it to do next, a playful rear-driven chassis that is the very definition of 'driver engagement and precision balance', brakes that deserve every last superlative under the sun, body control from the highest echelons of talent, damping courtesy of the gods themselves, and steering that thrills and delights in every conceivable circumstance. It's not just a cracking supersaloon in a mid-sized marketplace currently bereft of a wide choice of them; it's not even just a cracking supersaloon in the modern era, irrespective of size and price; no, it's a driver's machine of rare, borderline supernatural talent and reward. It is phenomenal.

You get a car that should go down in history as one of the greatest of its type ever made, for slightly less than six figures and now blessed with a cabin that doesn't let the rest of this glittering package down. There's more equipment fitted as standard and an improved roster of advanced driver assistance systems on offer, while an Akrapovič exhaust is a new cost option for the Giulia Quadrifoglio; we'd love to hear an Alfa with this fitted, truly we would. The only slight fly in the ointment here is that, from a buyer's viewpoint, you have to rationalise that the entry level for the Quadrifoglio is comfortably more than double what you'd pay for a Giulia at the other end of the food chain. Trust us: the V6 model is easily more than twice the car a bog-basic Giulia is, and a bog-basic Giulia is an incredibly good car indeed.

The best supersaloon of the last few years, and possibly even the 21st century, now has an interior where its main bugbears have been addressed. As a result, while the Alfa Romeo Giulia Quadrifoglio is still not quite a flawless car in every aspect of its being, it's so painfully close enough that you cannot fail but worship this majestic thing. It is a genuinely world-beating Alfa Romeo. 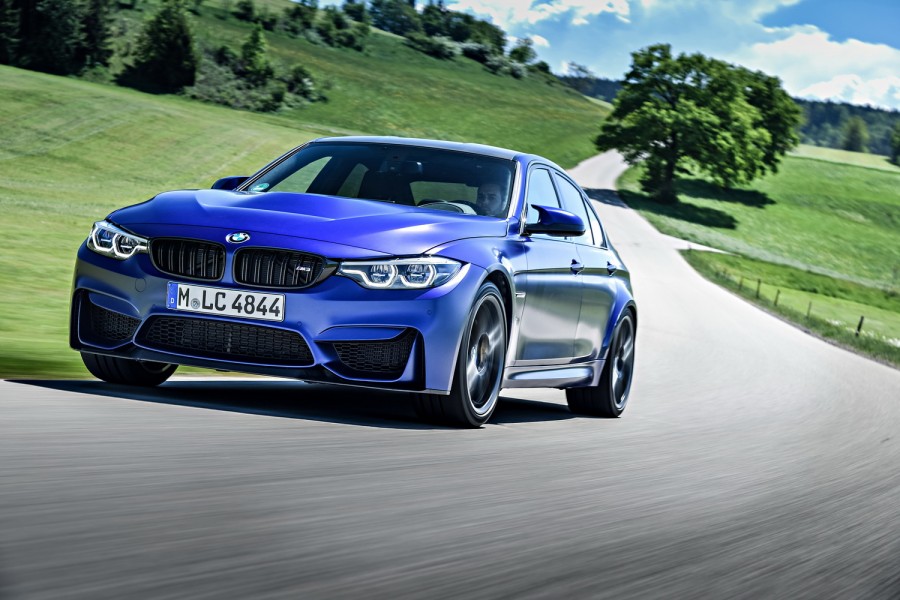 BMW M3 CS review
BMW M3 vs. Alfa Romeo Giulia Quadrifoglio (2021): we're still waiting for the current 3 Series to gain its M flagship, so you'll need to search out a used example of the old M3. Don't bother; excellent though it is, the Alfa is better. 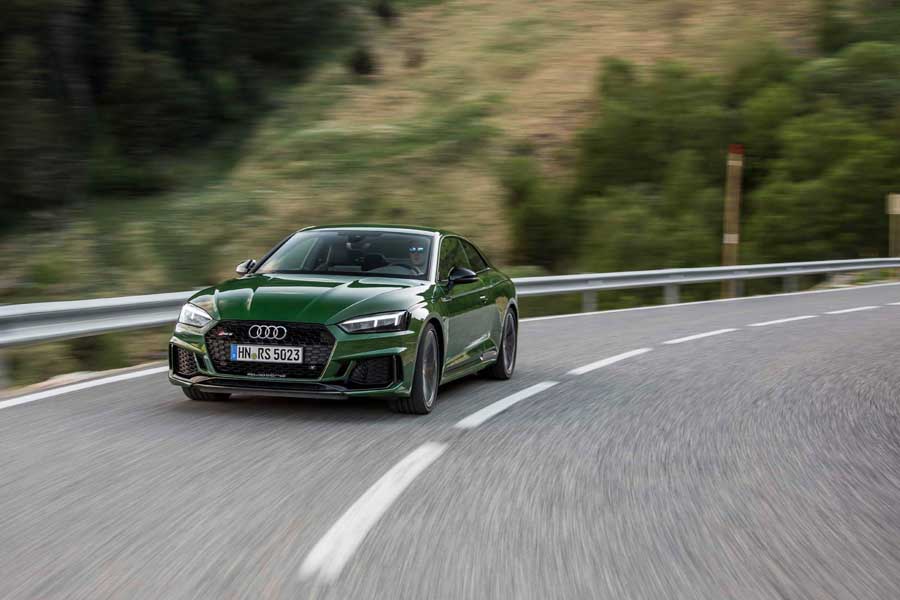 Audi RS 5 review
Audi RS 5 Sportback vs. Alfa Romeo Giulia Quadrifoglio (2021): as Audi doesn't have the common decency to do a saloon version of the RS 4, this four-door RS 5 is as close as you'll get to the Alfa. It has a nicer cabin and more traction... otherwise, the Giulia wins. Easily. 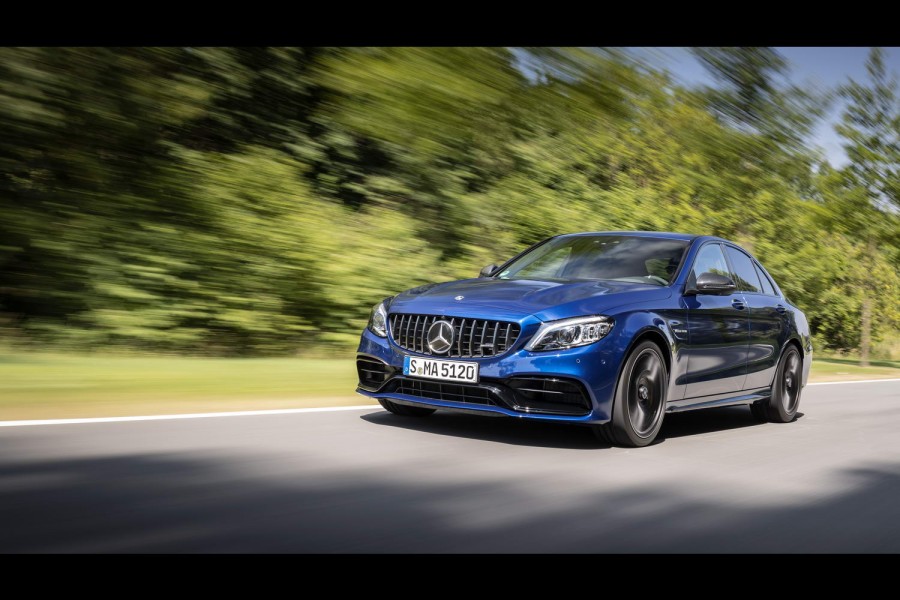 Mercedes-AMG C 63 S Saloon review
Mercedes-AMG C 63 S vs. Alfa Romeo Giulia Quadrifoglio (2021): the only one of the Alfa's direct rivals that's currently available and it has a stonking engine and an excellent chassis, although it's a blood-and-thunder-type car in the corners, whereas the Alfa is more delicate. We'd have the Italian.